Cyprus and the Vikings

Where do explorers come from?

There is no hard evidence that the vikings were ever in Cyprus. The Viking age began in 793 when a Viking longship reached Lindisfarne in northern England. The monastery was raided and the Viking age had begun. According to most historians it ended in 1066 and thus lasted about 250 years. In the same period Cyprus was kept busy during the Arab-Byzantine wars. In reality Cyprus is fully packed with historical accounts and this period was a time of raids and destruction. The vikings were certainly for hire and may have taken part in these raids but it’s hard to say.

Vikings were Norse seafarers who raided and traded across wide areas of northern, central, eastern and southern Europe. However they were foremost spectacular navigators who managed to reach North America, Africa and as far as Baghdad in the Middle East during their explorations. Who’s to say how much of our passed on genes dictate who we are today? I may come from a long line of farmers but I’d like to think that what I do with the Saga is related to a few hundred years of my Nordic heritage. 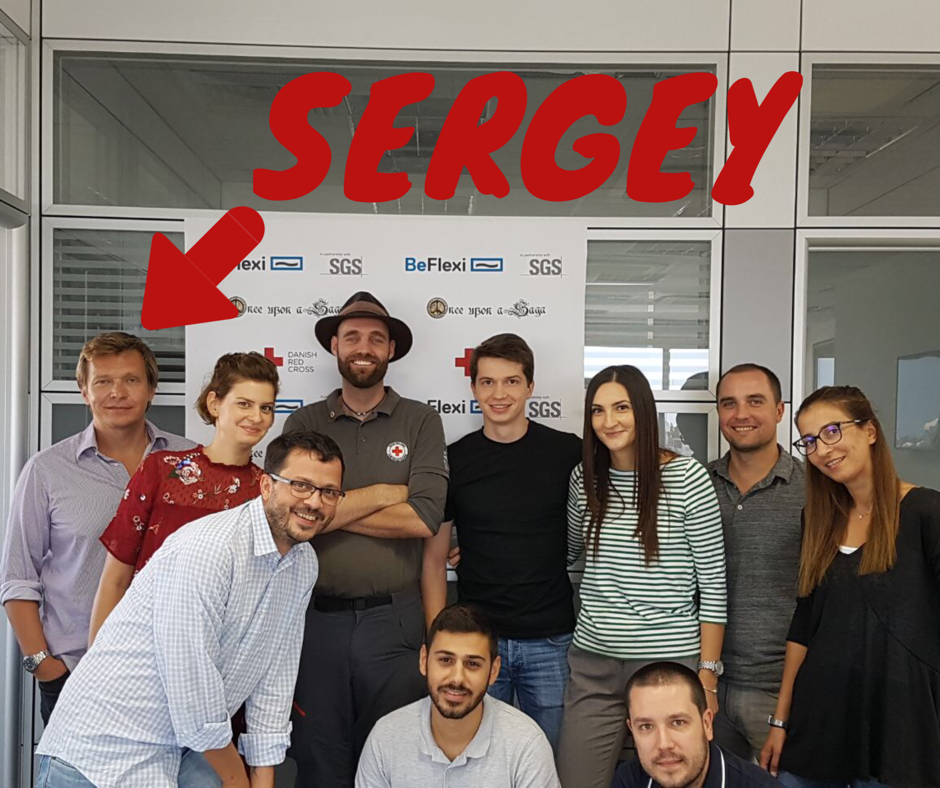 Sergey is the founder and owner of www.beflexi.com

Sergey is a Russian friend whom I have met here in Cyprus. He has taken great interest in supporting the Saga and he has challenged me greatly on the question: “why are you doing it”. I generally have a lot of answers to that question but never anything short and concise. I’m traveling to every country in the world but it’s much more than that. I’m a goodwill ambassador of the Danish Red Cross and I drop in on the movement whenever possible throughout the 190 countries where it is found. I run all the Sagas social media which aims to inspire, educate and entertain. I travel on a $20/day budget to show people that you need not be a millionaire to cross borders, meet people and make new friends. I consistently push a “keep on keeping on” message. I frequently reference that “people are just people” and prove that “a stranger is a friend you’ve never met before”. Nobody in history has ever reached every country in the world completely without flying...I fully understand why that is the case...it’s not easy. Now how are we going to fit all of that into a neat sentence? It’s not that easy ;) 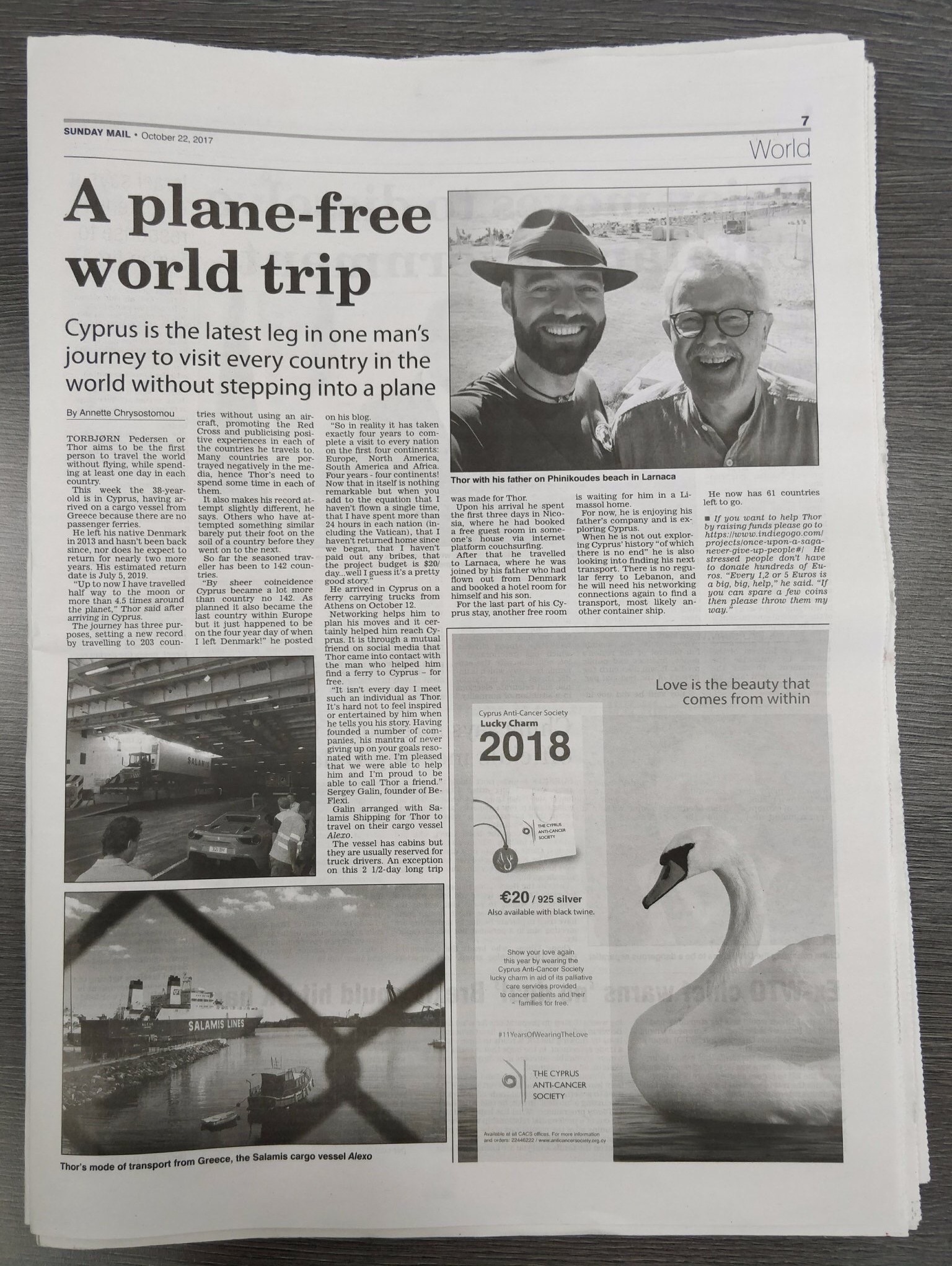 In 1923 George Mallory was at a press conference during his preparations to climb Mount Everest successfully as the first person in history. He had already taken part in such expeditions in both 1921 and 1922. A journalist asked Mallory “why do you want to do it” and Mallory snapped back with his legendary 3 worded reply: “because it's there!” In 1924 George Mallory died on Everest and it wasn’t until 1953 that Sir Edward Hillary and Sherpa Tenzing Norgay successfully conquered the summit. Mallory’s reply is very much how I feel about the Saga: “because it's there!”

1,200 new cards have been facilitated by www.beflexi.com :)

If you’ve ever watched the 1939 production of The Wizard of Oz then you might remember the scene where Dorothy and her companions are lulled to sleep by a field of poisonous poppy flowers. That’s kind of what Cyprus feels like after some time. People are really friendly here, there isn’t really anything to worry about, the ocean is nice, most things appear to work and it’s generally a good place to come and rest. I haven’t been resting though. I know I’m by the ocean and that it looks nice but in effect I’ve only been the water twice and on both occasions it lasted less than 10 minutes. I have however been able to do a ton of stuff which I have been pushing before me for a long time.

Sergey provided me with a couple of nights in a luxury hotel apartment and afterwards he moved me into his beachside apartment and told me: “whatever food you can find: it’s yours!” He’s a great guy and we talk a lot. He’s completely baffled that the Saga doesn’t have millions of followers and that sponsorships aren’t lining up for me to pick and chose from. I wouldn’t disagree and I think it’s clear that I’m doing something wrong? However for quite some time I have been exhausted and on top of that I feel like I have tried so many things already. How about I just keep on keeping on and make it home by 2019? What about lost potential? “Stop being humble! You’re doing something incredible. You have already achieved the impossible. You only need to make a few small changes. You need a PR agency”. Sergey is right about a lot of things. And a PR agency would be great a great thing but who should pay for it? “Let them fund the money and work for you on a payback system. Forget about your $50,000 crowdfunding which is only to cover the running costs. Think bigger. Think PR agency and profit!” Right now I’m thinking about my bed...it’s midnight now and I’ve got about another 3 hours left of writing this and getting it online... 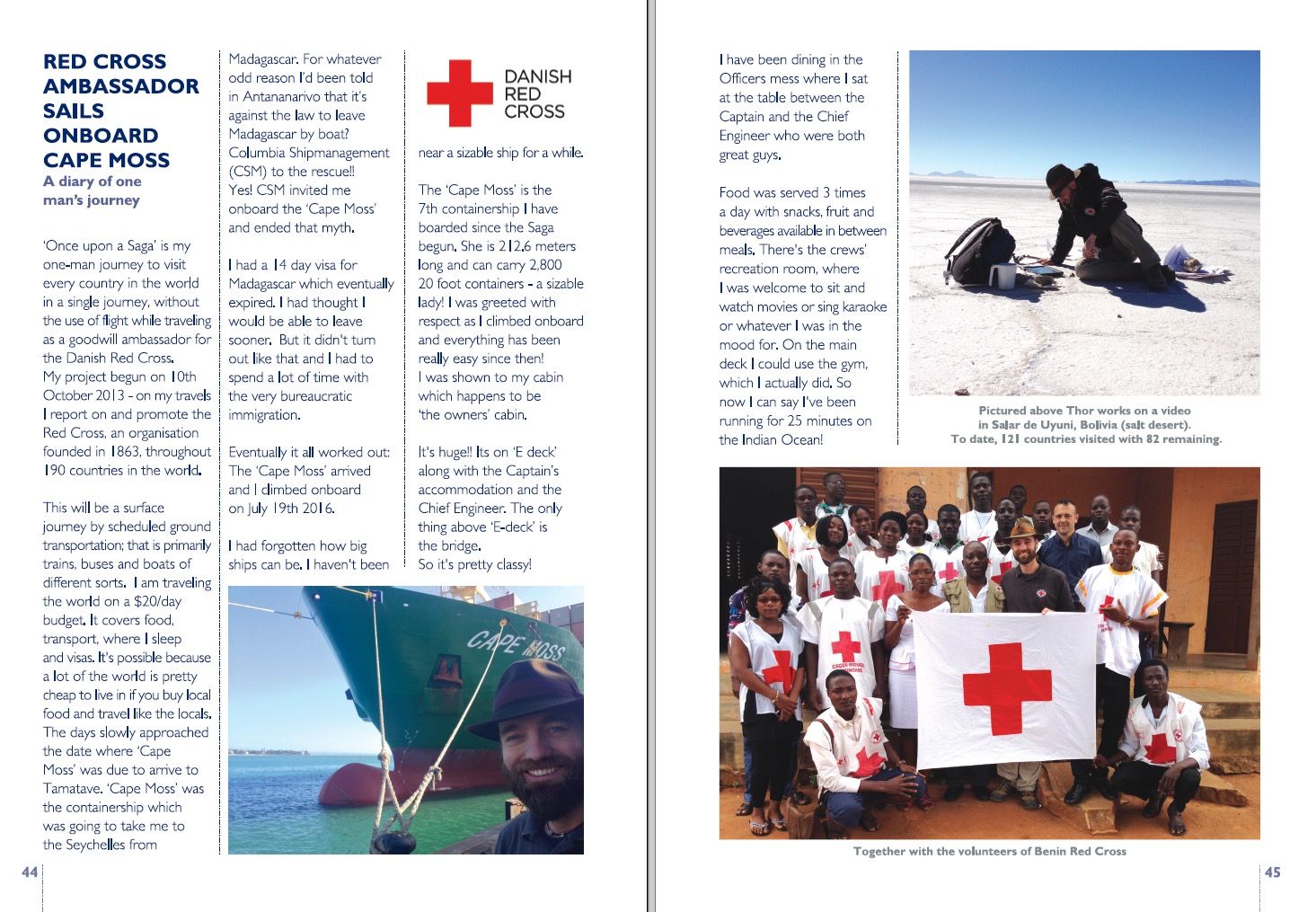 Natalie and I co-autored this article for Columbia Shipmanagements magazine (Compass) back in 2016.

Natalie Sey works for Columbia Shipmanagement and we have known each other since I boarded the good ship “Cape Moss” from Madagascar to the Seyschelles. That’s already more than a year ago so it was great to finally meet her here in Cyprus. We meet up one morning and went hiking. She’s a really cheery person and I don’t think I have caught her not smiling. The nature of Cyprus is spectacular and the mountains are quite proper ranging up to 1,952 m (6,404 ft) so that’s quite impressive for the 3rd largest island in the Mediterranean. It was also a fresh breath of air to come up between the mountain villages where it’s much cooler. 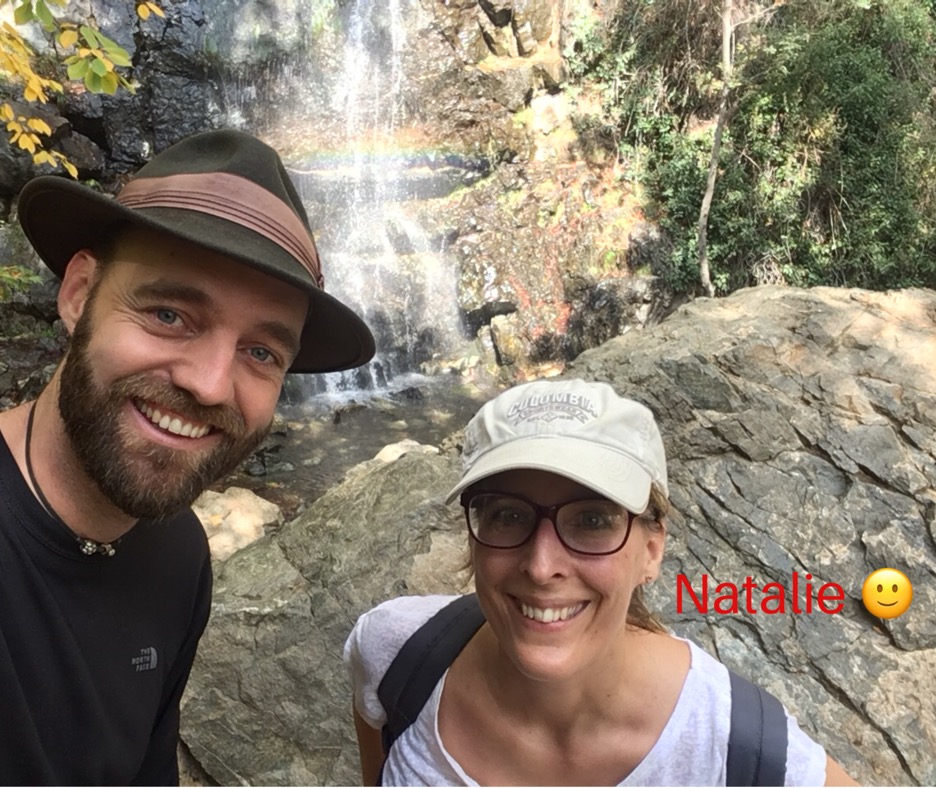 A few days later Natalie and I drove to Nicosia to collect my new uniform which will hopefully last throughout the remaining project. There are a few changes which I’m sort of sad of but also I’m quite happy with the new look. As voted by those on Facebook, Twitter and Instagram the new emblem replaces the Red Cross emblem which I have worn on my chest everyday for the past 4 years. It feels strange not to wear the Red Cross emblem any longer with the same amount of visibility. It was however time for a change and I am very proud of what we are doing and what the Saga has become. I am still a goodwill ambassador of the Danish Red Cross - nothing has changed there. And I have kept one of the old polo shirts for visiting the Red Cross and Red Crescent throughout the rest of the world. 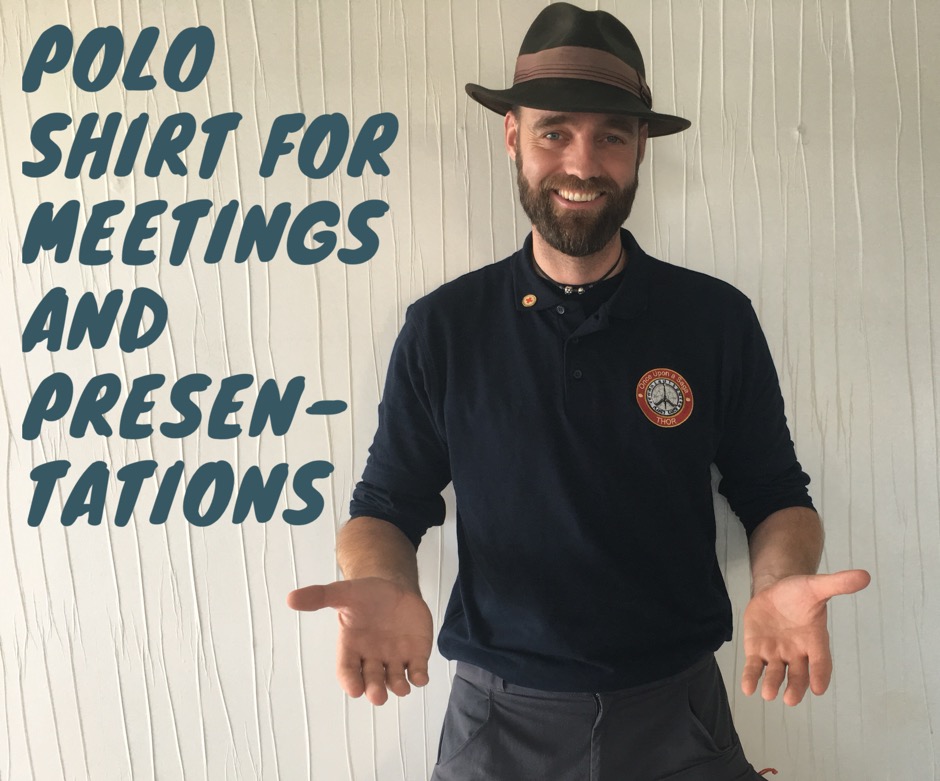 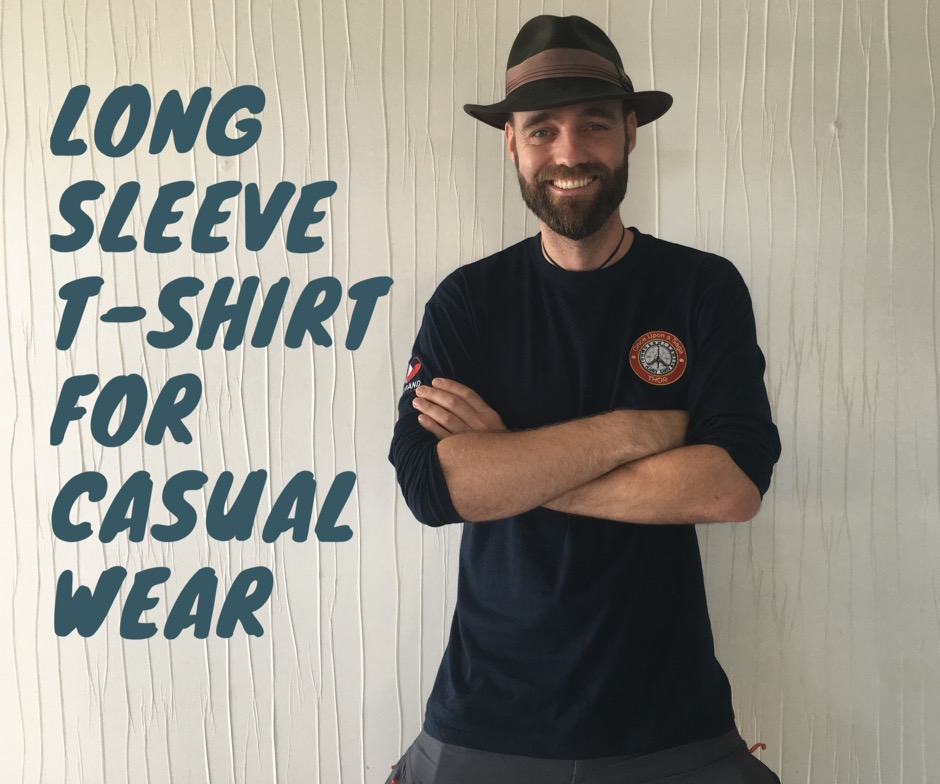 I have also removed Ross Offshore (www.rossoffshore.no) from my left upper arm. Ross brought us far within the Saga and sponsored the budget between October 10th 2013 and March 2016. The discontinuation of funding came as a direct result of the low oil prices and I fully understand although it was quite a blow. Ross Offshore remains a partner on the Saga through various support, however I have now freed up space on my left upper arm in case something good comes along to fill it out. 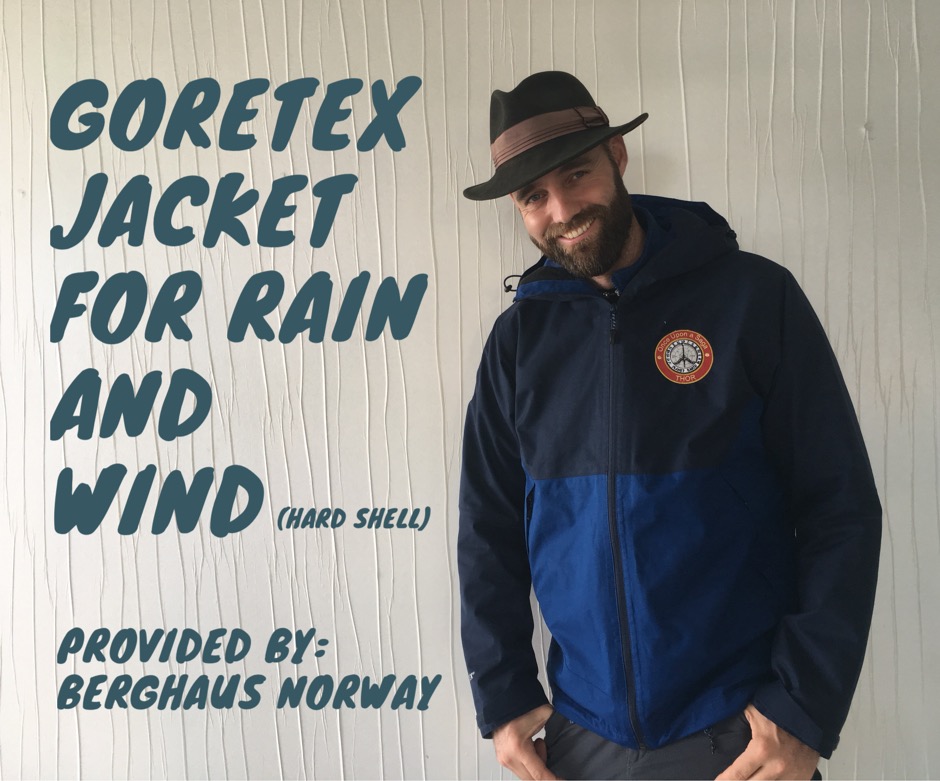 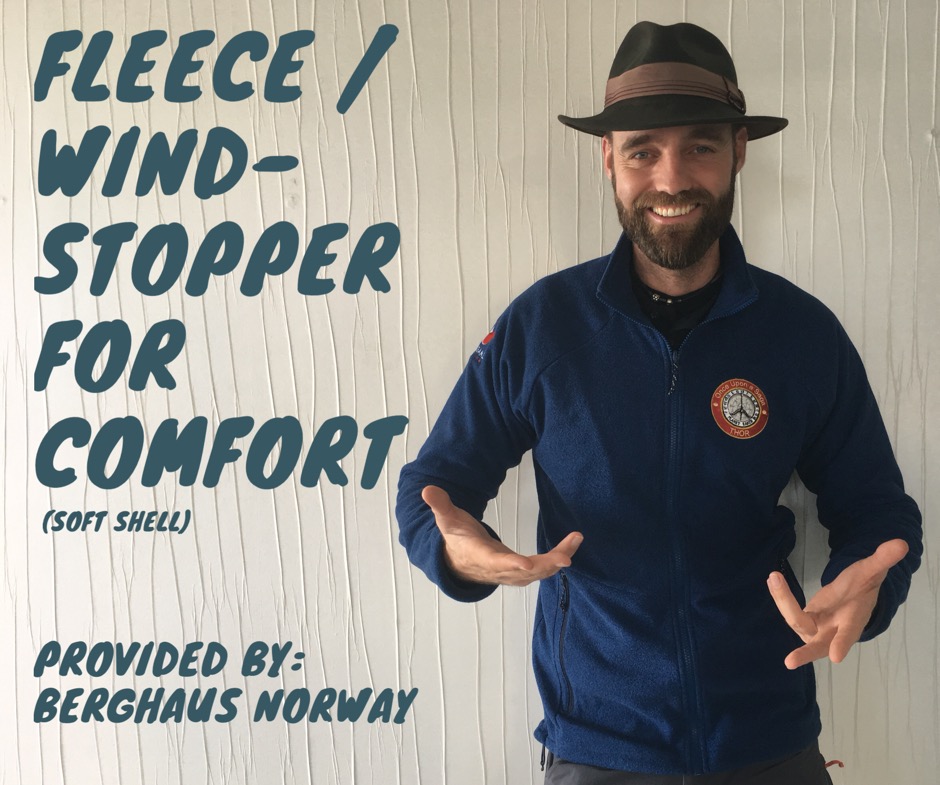 The colours have changed from dark grey to marine blue. I think it looks good but it was really because the supplier didn’t have dark grey on stock. Berghaus Norway has been a partner since the Saga began and supplied me with some new clothing. This included a Gore-Tex hard shell jacket and a fleece (which happened to be blue). So you see...that worked out well ;) 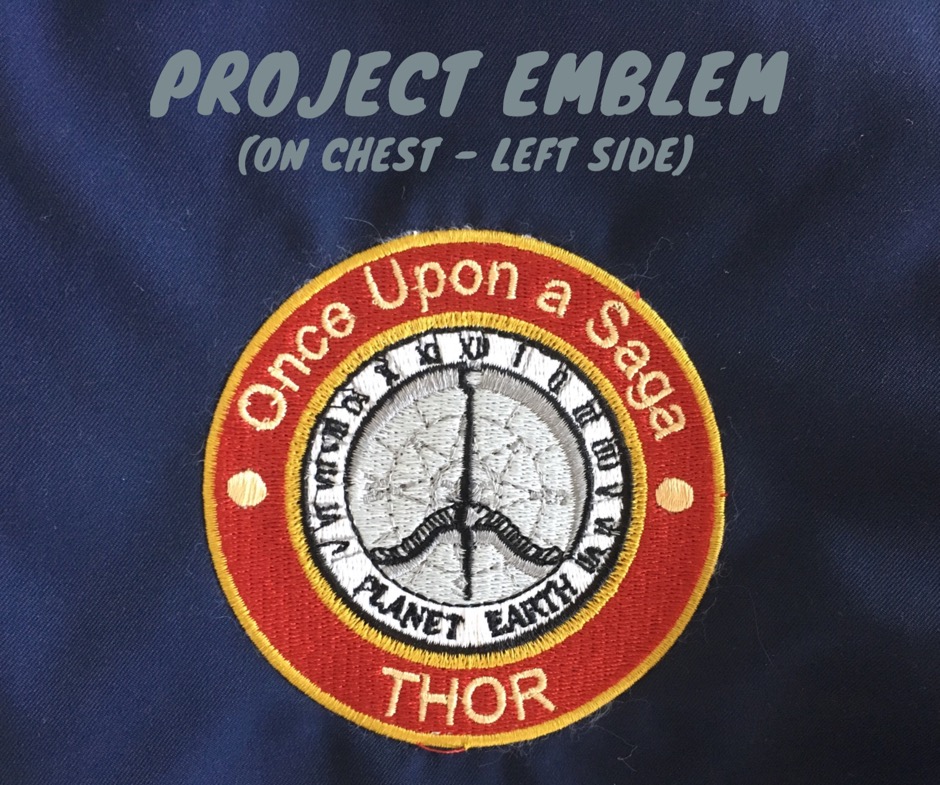 I have been speaking with MSC (Mediterranean Shipping Company) who have promised to do what they can to get me onboard one of their vessels. At this point it looks like I may be able to come onboard the good ship “MSC Augusta” which departs Cyprus to go to Lebanon on November 9th. That’s a little far into the future but it does potentially provide me with my much needed break from the Saga. Sergey’s apartment is perfect for this so I’m hoping to sleep, eat well, read and relax so that we can complete the Saga successfully. I’m sure we all agree that my physical and mental health is important and needs to be maintained. After all 4 years is a lot of time and it wasn’t a cruise that got me this far. The latest numbers are in and including Cyprus I have reached 187,665 km (116,609 mi)!! Our planet moves around the Sun at 110,000 kph (67,000 mph) so in those terms it’s not impressive at all. It has taken me more than 4 years to get this far and I relied on a lot of help from many of you. It is however nearly half the distance to the moon or 4.5 times around the equator. It’s not the years I feel...it’s the mileage ;)

Jason comes from a shelter in Cyprus and keeps me company in Sergey's apartment :) 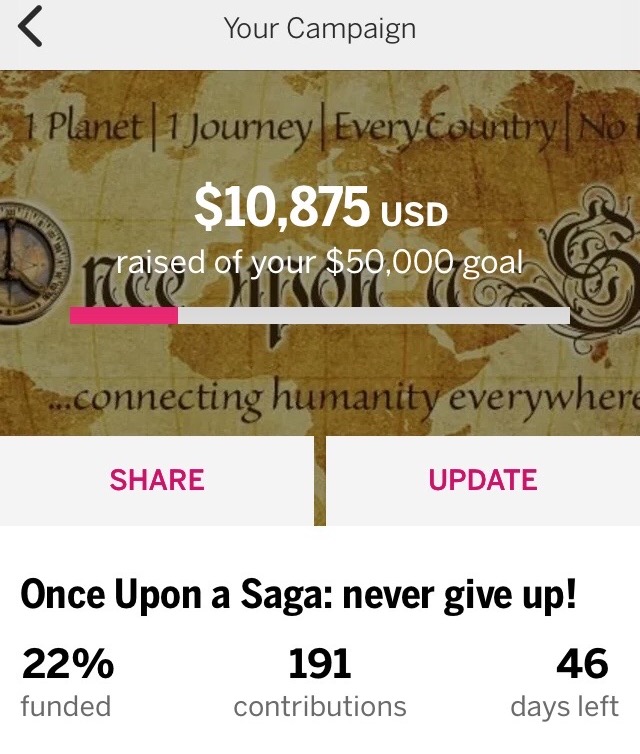 Mr. Torbjørn C. Pedersen (Thor) - ready for that nap now.
"A stranger is a friend you've never met before"
Once Upon A Saga
facebook.com/pages/Once-Upon-a-Saga
instagram.com/onceuponasaga
twitter.com/onceuponasaga
youtube.com/channel/UCSy7qFQzxM9VOaMeOfYia_g
linkedin.com/in/torbj%C3%B8rn-c-pedersen-9a996511
blog comments powered by DISQUS back to top

@SalomonSports Sounds good to me 👍

QUESTION 🤔 Do you believe that if we all wear masks when we assemble in large groups, then it will have a large imp… https://t.co/b1Pz7yGrZ4

I figure that the reason why social distancing rules are non-existent in Hong Kong’s public transportation, and tha… https://t.co/yFHVMHCKj5

@kilianj Great job. Good to see you happy in spite of it. Recover well.