2019: Incredible !ndia and a tolerance for noise!! (and my fiancée visits)

(The opinions expressed on this site are my own, and do not reflect the position or policies of the Danish Red Cross of which I am a Goodwill Ambassador for)

Hey there people of the world. I hope you arrived safely into our bran new year: 2019!! What an achievement of us all!! For an entire circle around the Sun none of us fell of the planet and we are now ready to start a new year where we all are a little bit older. Hopefully wiser too.

My fiancée is right next to me while I write this. So I’m not going to waste the time we could otherwise spend together. Where is here? We are in Amritsar, India. So that tells you that all went well in Pakistan at the High Commission of India in Islamabad. I picked up my visa and left with a smile. Then a bird pooped on me in a park in Islamabad. Good luck people say? How come so many people across so many countries think that? I guess that’s some common ground for all of us. Minutes later another bird pooped on me and with two bird droppings on me I had enough and I left the park…how much luck does a man deserve...

Lahore Fort, Pakistan. Early morning before the city woke up.

I spent a night in Lahore, got up early and visited the famous fort. Then I crossed the Wagah border into India which caused me some problems in regards to leaving. I had been told at the 'Directorate General Immigration and Passport Headquarter' in Islamabad, that my visa did not need an extension as I had a “14 day grace period”. I believe it was the Director General himself who told me that. It was certainly the one who had the largest office. At the border immigration had heard of no such thing and just focused on that my visa was one day overdue. My fiancée was about to land in Amritsar airport so I was in no mood for that kind of nonsense. I puffed up my chest a bit and made myself clear. That momentarily seemed to backfire on me but after a 20 minute delay the Pakistan immigration at the border ensured me that I was their guest and that they would do whatever they could to help me. Moments later they made an extension for me and I was stamped out of the country. I guess it also helped a bit that I could show them the interview on GNN TV (watch it HERE). 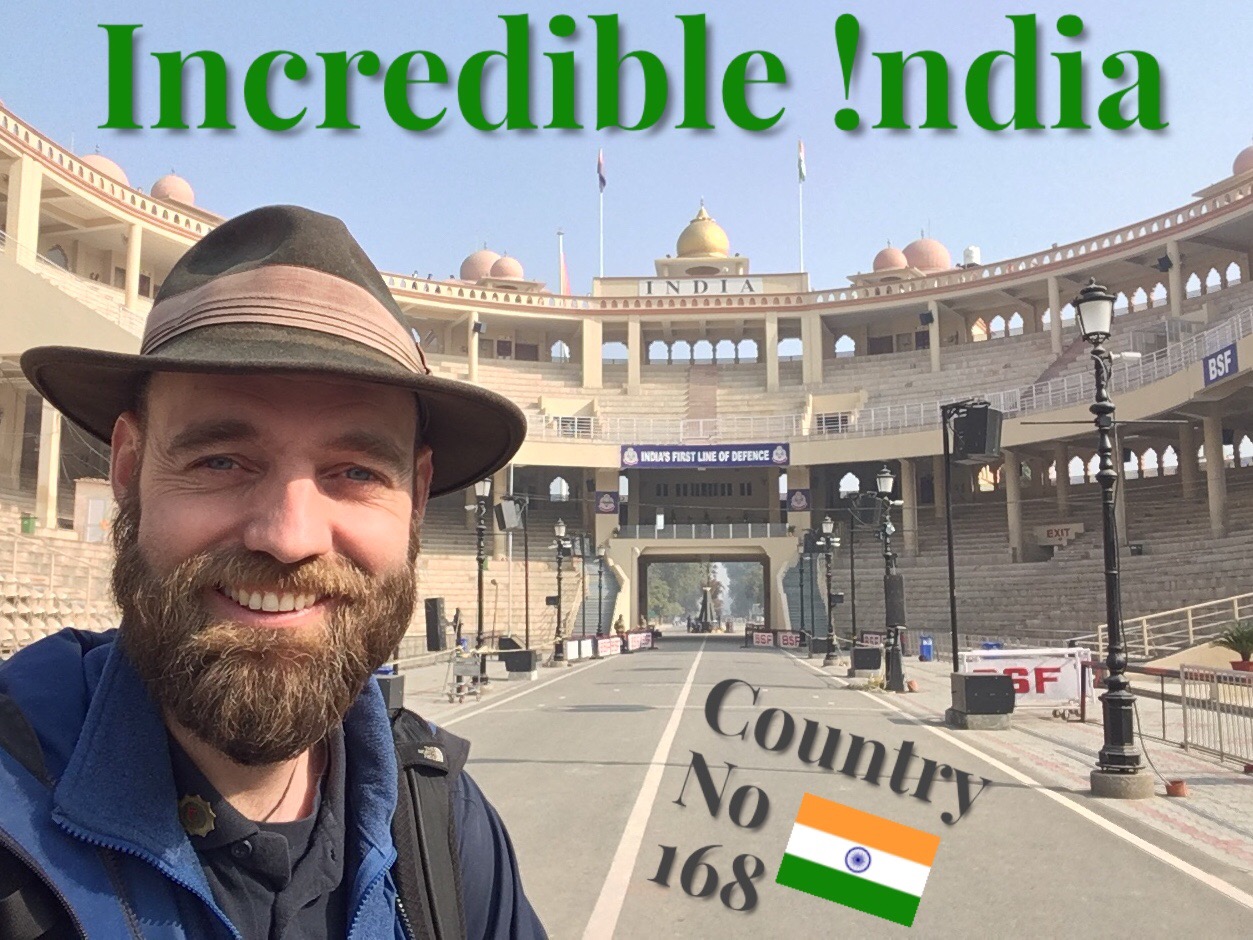 168 countries in an unbroken journey completely without the use of flight.

Across the border I quickly reached a taxi, headed to the airport and we have been together ever since. This is the 19th time she visits me since October 2013. Amritsar is famous for the Golden Temple so we have been to see that...four times. We have also made our way to the superball of border closing ceremonies: the Wagah border. I’ll try to make a video for you but there is really no shortage of videos across YouTube if you want to see how entertaining and interesting that is. Amritsar is much more than just the Temple and the border. We have enjoyed walking the old narrow streets, we have definitely enjoyed the food which often fills us up for less than $4 USD and we have stumbled across www.cityonpedals.com which is a hostel that offers incredible tours which are an absolute MUST if you come to Amritsar. They come highly recommended and get two big thumbs up from my fiancée and I as well.

The Sikhs serve free tea for us at the Golden Temple. Free food and accomodation too if you want.

When the boom gate is down people wait for the train...or not ;)

The food is uhm good! 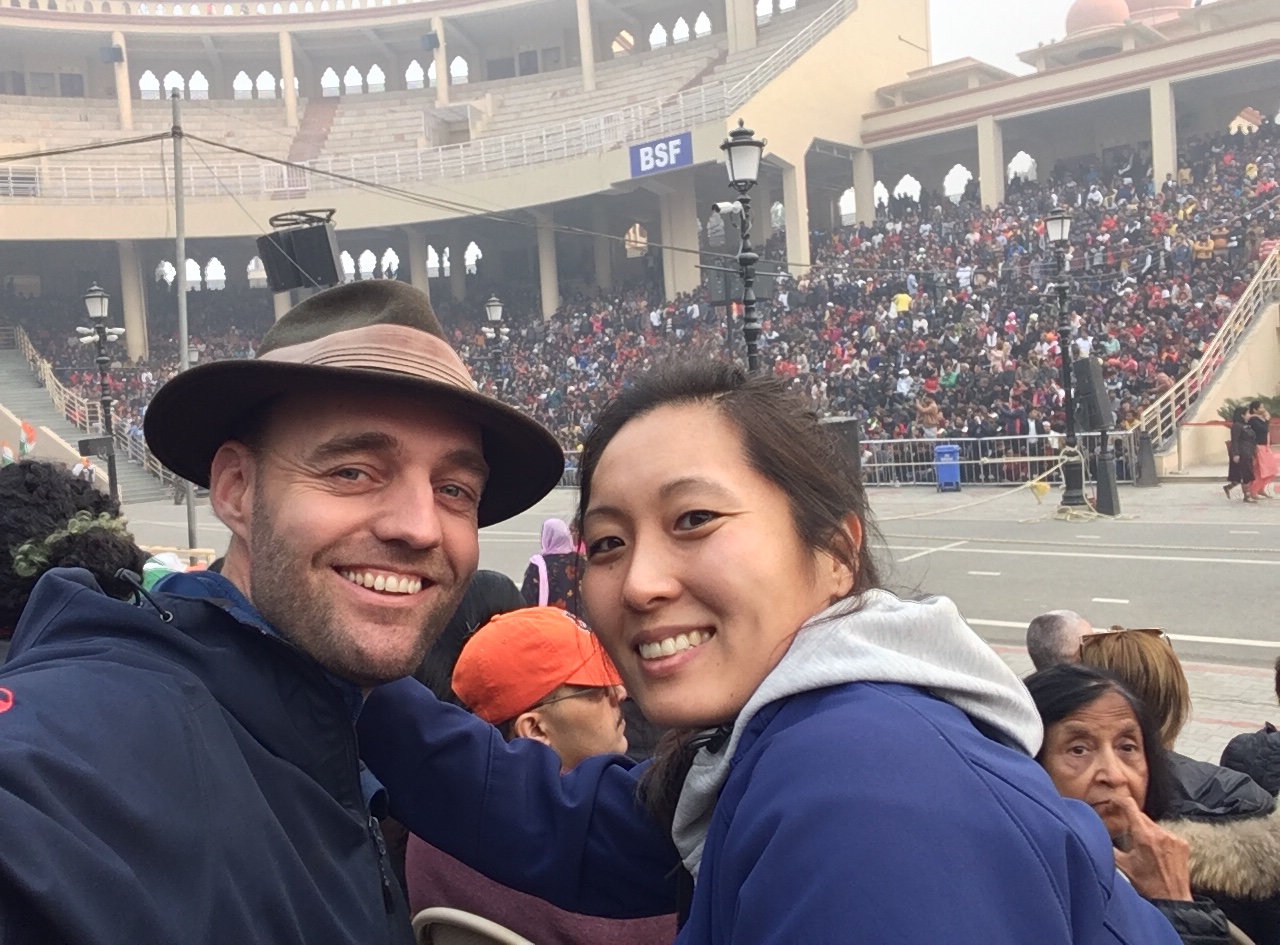 At Wagah Border minutes before the daily closing ceremony begins. 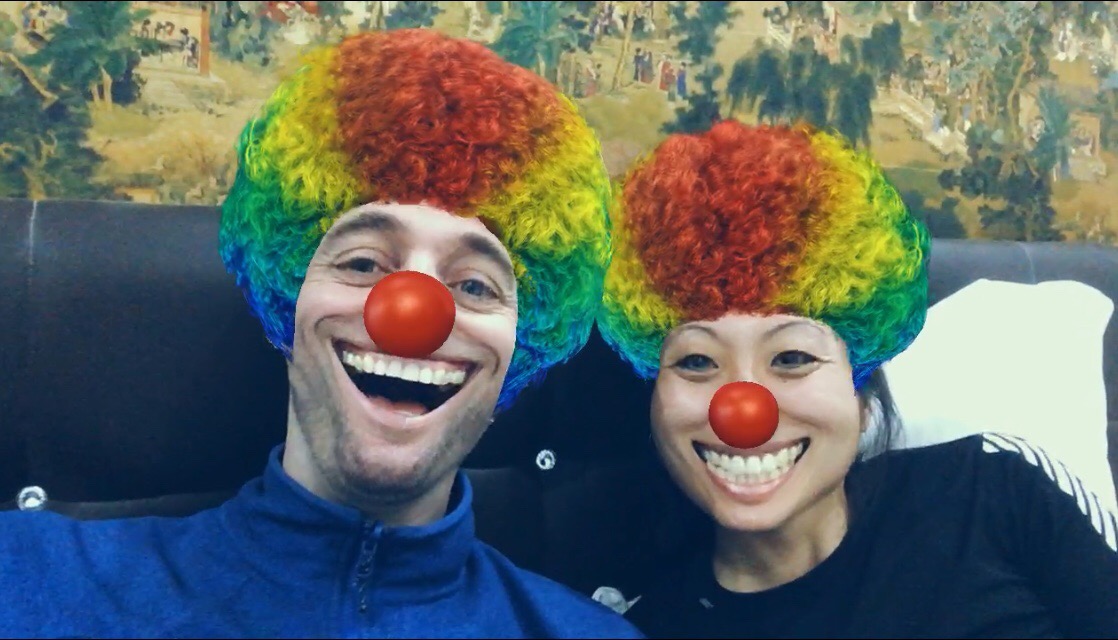 Fooling around New Years Eve. We watched Harry Potter and decided to drink when they said a magical spell while we ate cake every time they said 'Harry Potter". That kept us busy!!

We went back to the Golden Temple for the third time on New Years Eve. It was jam packed! Special atmosphere. Memorable New Year.

There is much to be said about India. There is much to be said about Pakistan. There is much to be said about the past week but please have me excused as I have other things to attend to right now :) India is what the tourism slogan says: Incredible! I mean that in every sense of the word. At times you will get incredibly frustrated over a number of things. The level of noise can at times be outrageous and you would hardly be able to tell if you were surrounded by regular vehicles or if every moving object on the road was an ambulance with the sirens blasting away. Then it all changes. You recognize how easily people smile. How they love music, food and dance. And you might just fall in love with that too. I’ve been to India before. That was back in 2010 on a motorcycle adventure with a good friend from Australia. This time I will be here for at least three weeks as I get us ready for Bhutan, China and North Korea. Look forward to the next entry. Welcome to 2019 ;)

https://t.co/XtUA9szXqs Hi, I'm without internet. But everything is okay. This update is sent via my gps tracker. It's a modern world.

Hey there Twitterlitter!!😂 I know I’ve tweeted a lot today but I’m offline for the next ten days. It’s our friends… https://t.co/QTk19dtVhi

Hi @maersk - if you’re playing hide and seek with me out here in the Pacific then I’m winning!!!😉 Found you in… https://t.co/ULgRG36GBS

This island nation is sometimes just called Micronesia which can be confusing as Micronesia is also the name of a r… https://t.co/ksjZGiRglC