View Comments
Another day, another country

Nigeria:
I had a great last few days in Abuja. I met even more people and had a chance to reunite with some of those that I had met earlier. I had been spending a lot of time with Umar Mairiga in his office at the Red Cross. He introduced me to his brother Aliyu, who showed me world class hospitality by guiding me around the national mosque, buying me lunch, buying me some snacks for my continued journey, explaining me about the culture and recent history and much much more...the kindness of a stranger never seizes to amaze me. later that day Mairiga invited me out for a light dinner and some socializing at a prominent club where they happened to have shisha ;) 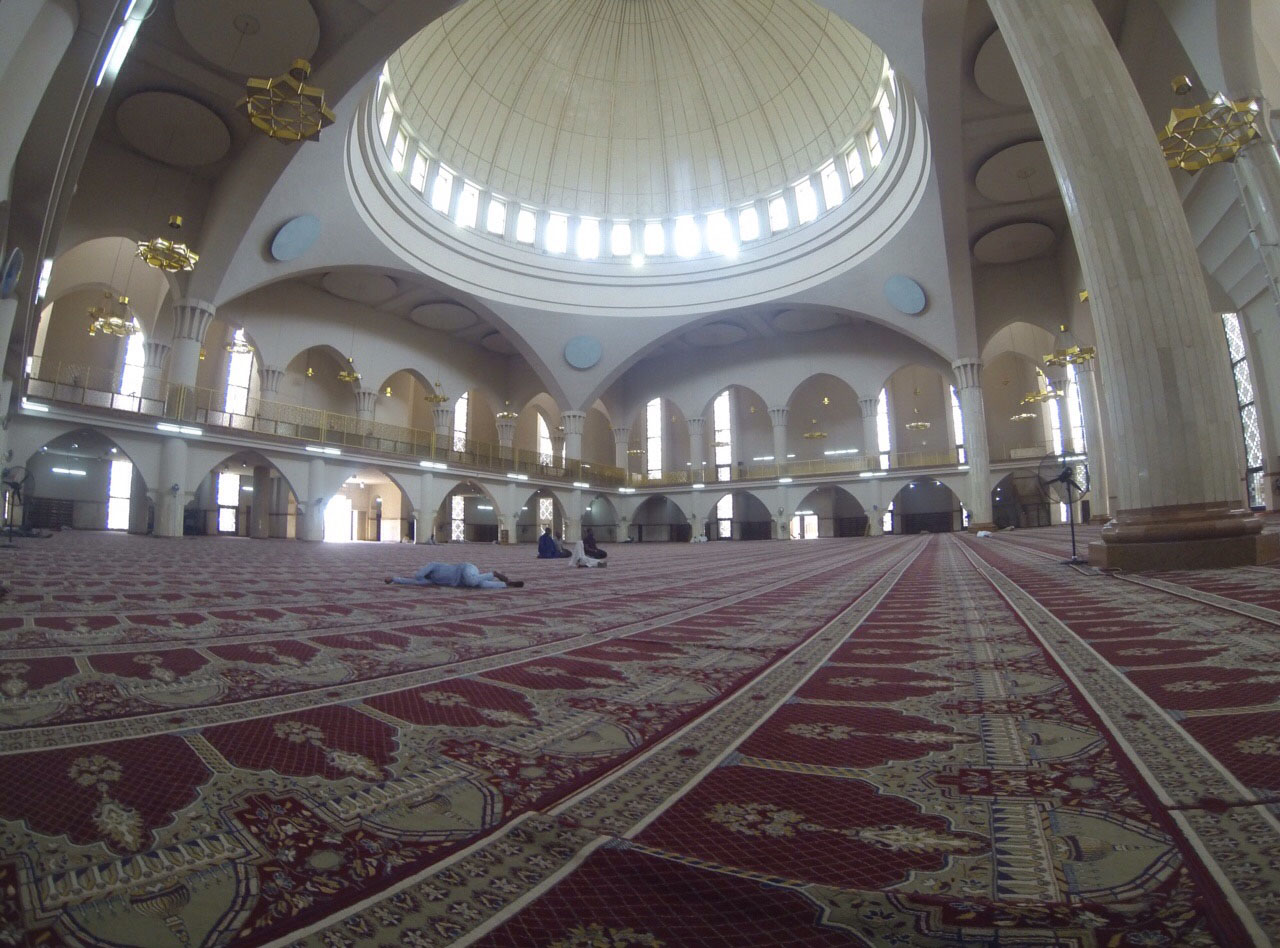 I love the relaxing atmosphere of a mosque. Often you see someone flat on the ground taking a nap or a group of people talking.

Also, the day before all of that I went out with the hosts and producers of We radio. We had a good time, but cut it short as some of the producers needed to get up at 03:00am to start the morning show! That was probably good because I think we could have talked all night :) 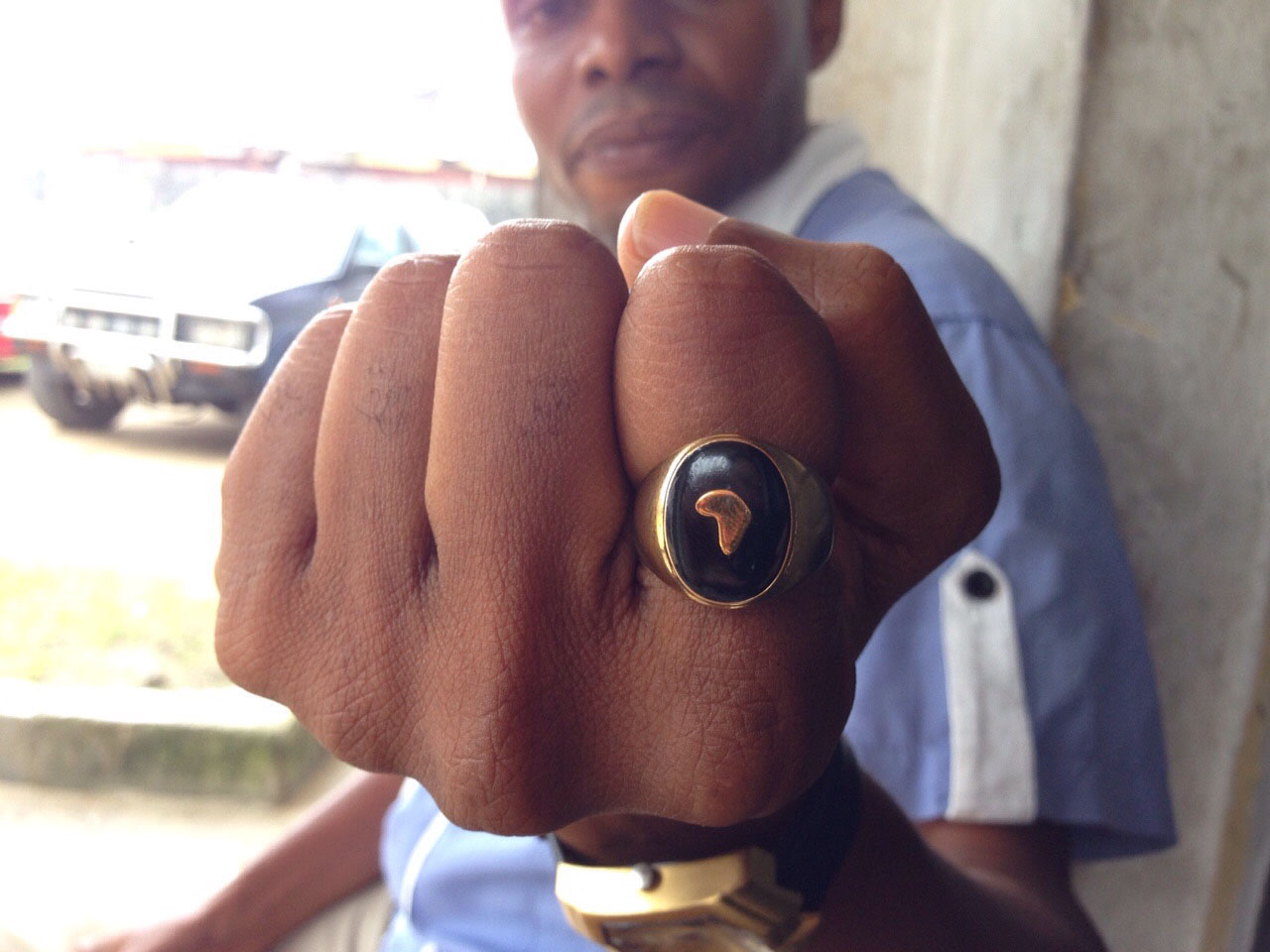 African pride is common in every African country so far. Even though most have never left their country. Fascinating.

I received a lot of SMS messages from people wishing me a continued good journey and Fortune called to see if we could meet before I left. But unfortunately we couldn't. I love to have a reason to return and I feel I have many. But I could say that about many countries now...

I boarded a bus which headed south to Calabar, which used to be the capital of Nigeria, before the capital was moved to Lagos...and ultimately Abuja. So far my experience of the road conditions had been good. But that took a change as Abuja disappeared behind us. I've seen the inside of oh so many buses now. I prefer a smooth road but that wasn't what was on the menu...

But the landscape became far more lush as we headed further south and the beauty of it was striking! You win some you loose some...it was worth it. 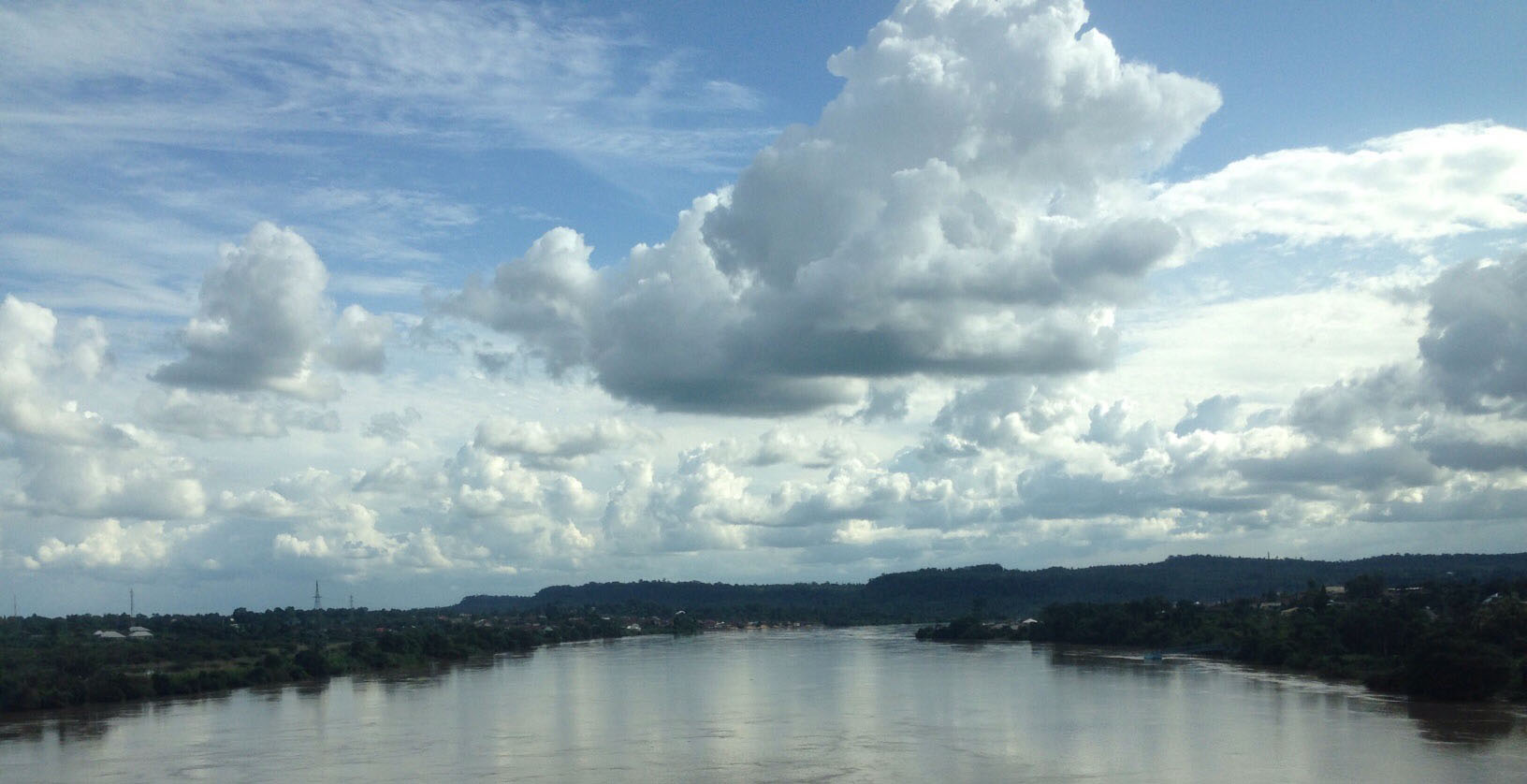 Do to the security situation I had been warned against crossing the land border to Cameroon. According to some of my sources the south east of Nigeria is not completely safe and I was warned against it. But that wasn't an issue as I could simply board the "daily ferry" from Calabar and sail to Cameroon. I arrived to Calabar a Sunday evening and was received by the local Red Cross branch who facilitated my arrival. We found a cheap hotel for the night and proceeded to the port to gather some information. It's nice to have that kind of help for a change and it makes everything much easier for me. But I do loose some of the "adventure" of managing on my own. Actually I do not always know what I prefer? But this was nice :) 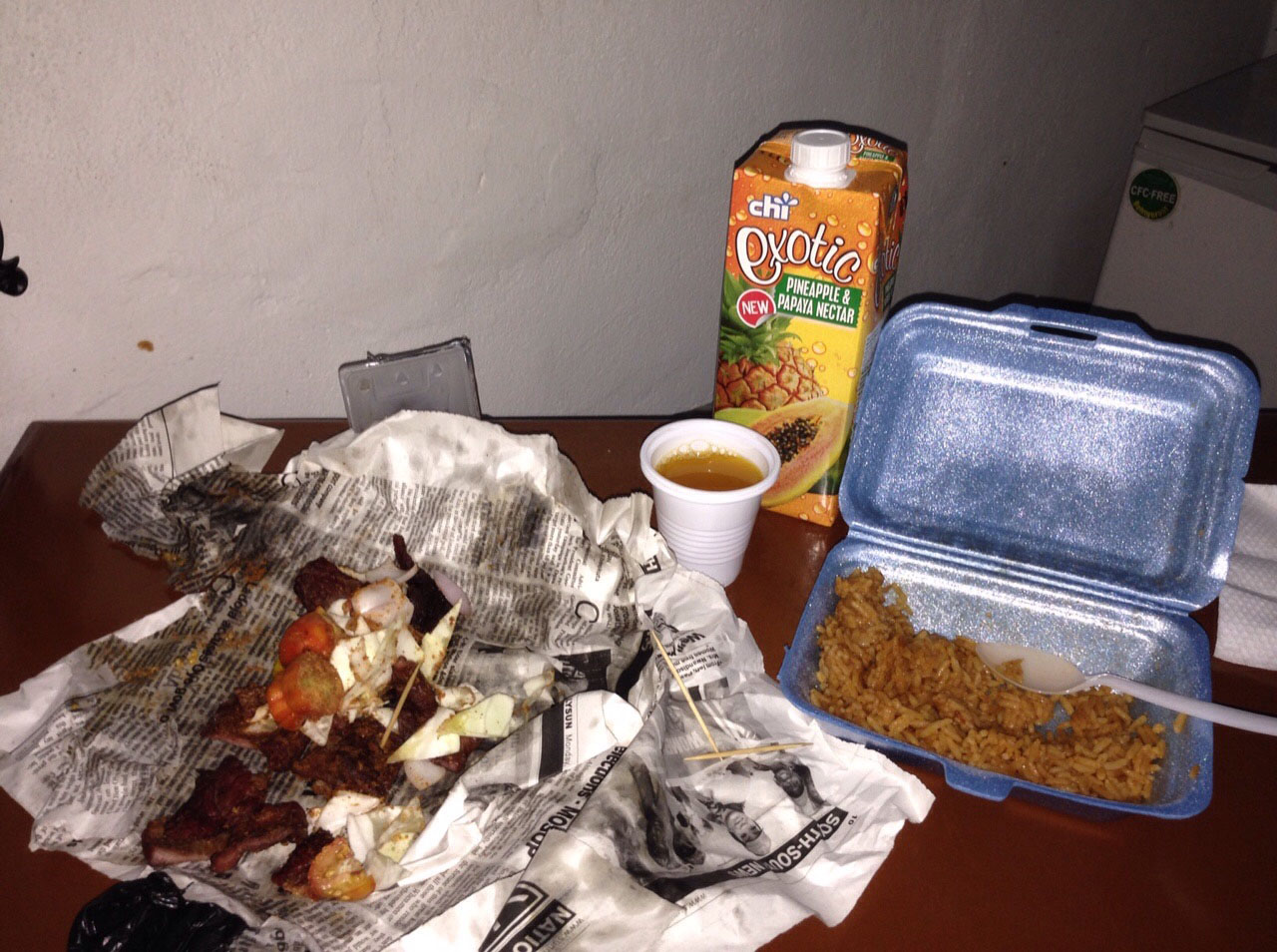 At the port we learned that the earliest departure would take place Wednesday, meaning that I would now need to wait for 3 days in Calabar. Hmm... At this point I spoke to a Red Cross volunteer named Cosmas. He lives near the border and told me that it was all good. Nothing to worry about. It's completely safe... 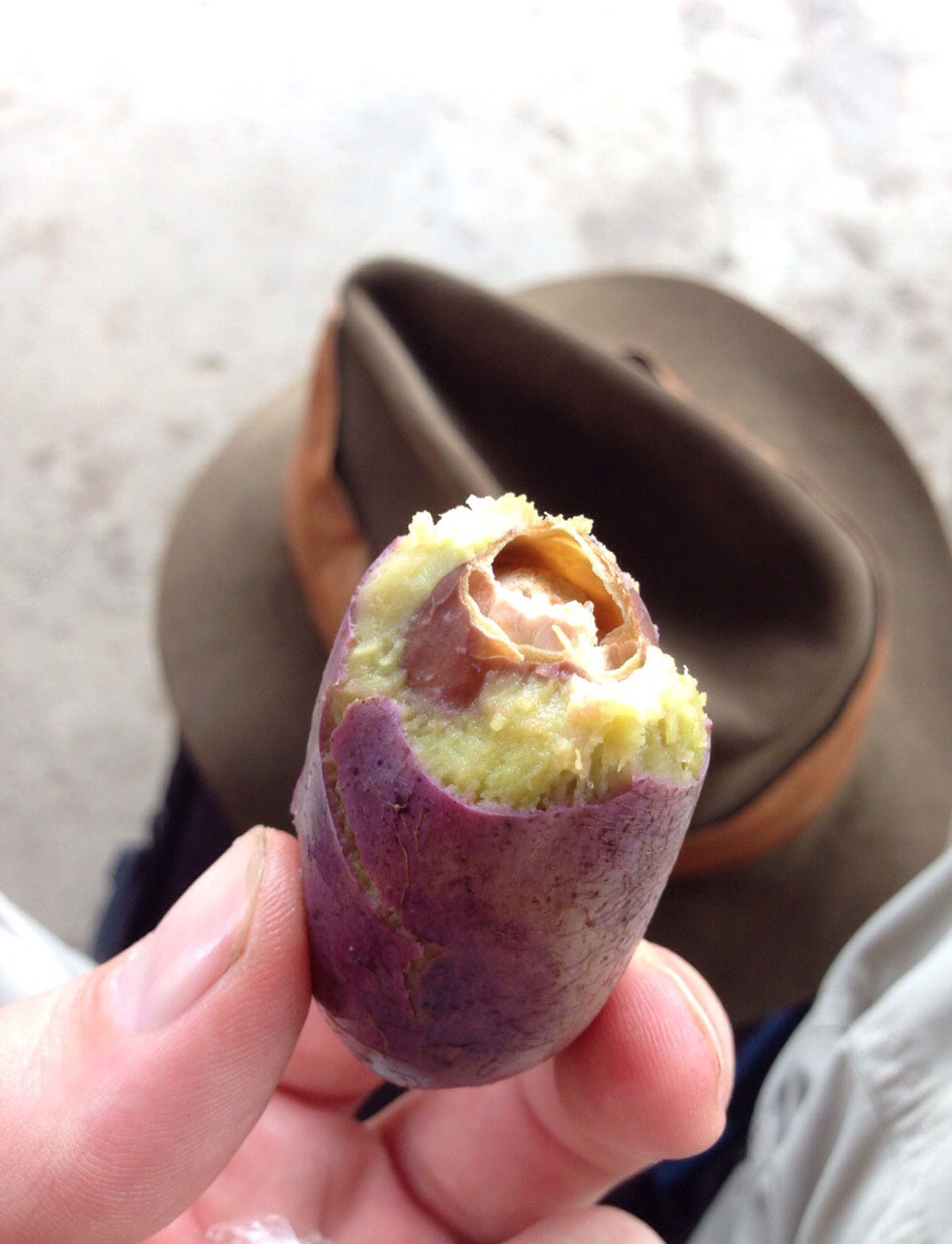 When I left home I hoped to "taste things I had never tasted before". Mission accomplished! I think this was called "pearl".

If I was traveling with family...or a friend...or my girlfriend...then I probably would have waited for the ferry. But I can look out for myself (within reason) so I agreed to meet Cosmas at the border. Later that night Cosmas called to tell me that he was coming to Calabar the next day for a 10:00am meeting. But we would leave at 1:00pm and I could cross the border at 4:00pm which would put me in Yaoundé (Cameroon's capital) around 10pm.

To make a long story short:
- Cosmas arrived (with public transportation) around 2:00pm.
- he then disappeared until around 5:00pm.
- we couldn't reach him because his phone was broken?
- Cosmas then decided that the last bus had left so he would sleep in Calabar.
- we put some pressure on him and suddenly we were heading to the border.
- around midnight we reach his village.
- Cosmas drives me through 10-15 checkpoints.
- we cross the border together around 01:00am in his car.
- because of a curfew the busses cannot leave until 05:30am.
- we say goodbye around 01:30am and Cosmas drives back into the night. 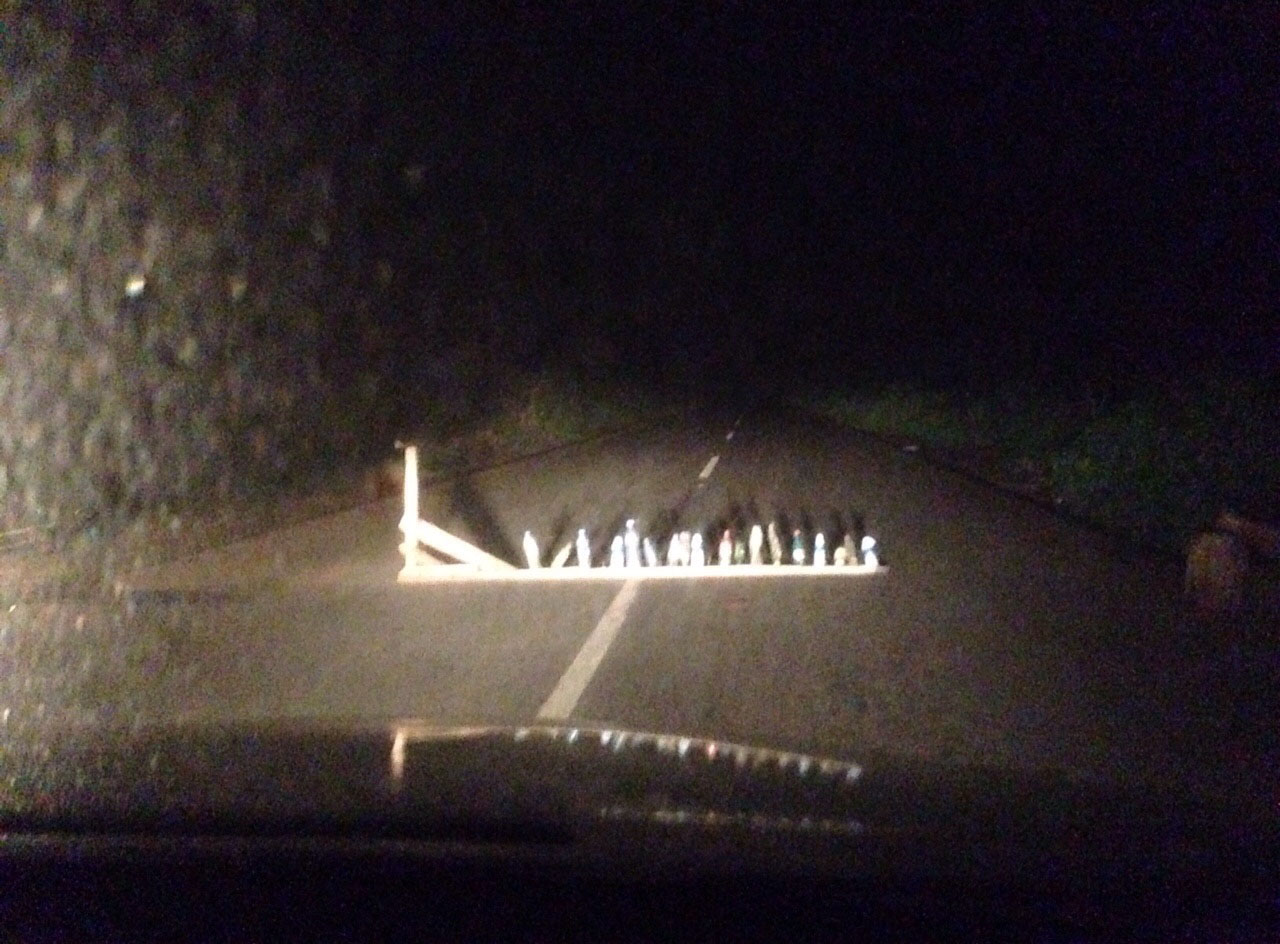 Bottles cover over metal spikes which would easily puncture a tire. It's a common accessory at most checkpoints.

I don't really know what to think? In spite of him being heavily on "Nigerian time" it all just kind of worked out anyway and he did get me across the border as promised. The border by the way was nice, clean and efficient in a rainforest kind of way. A complete contrast to the horrible border I entered at 2 weeks earlier.

Cameroon:
For whatever reason the people that run the "Vatican Express" were up at that late hour. So I put my name on the list, found a good spot for my hammock - and slept for around 3 hours.

When I woke up the area was buzzing with activity. Plenty of people were getting into the many minibuses which were being stacked and packed with goods. I'm "different" than everyone else so I'm treated "differently". I don't know much French but I do know that they call me "the white one". And apart from often "misquoting" me the price on anything and everything they often offer me the front seat. 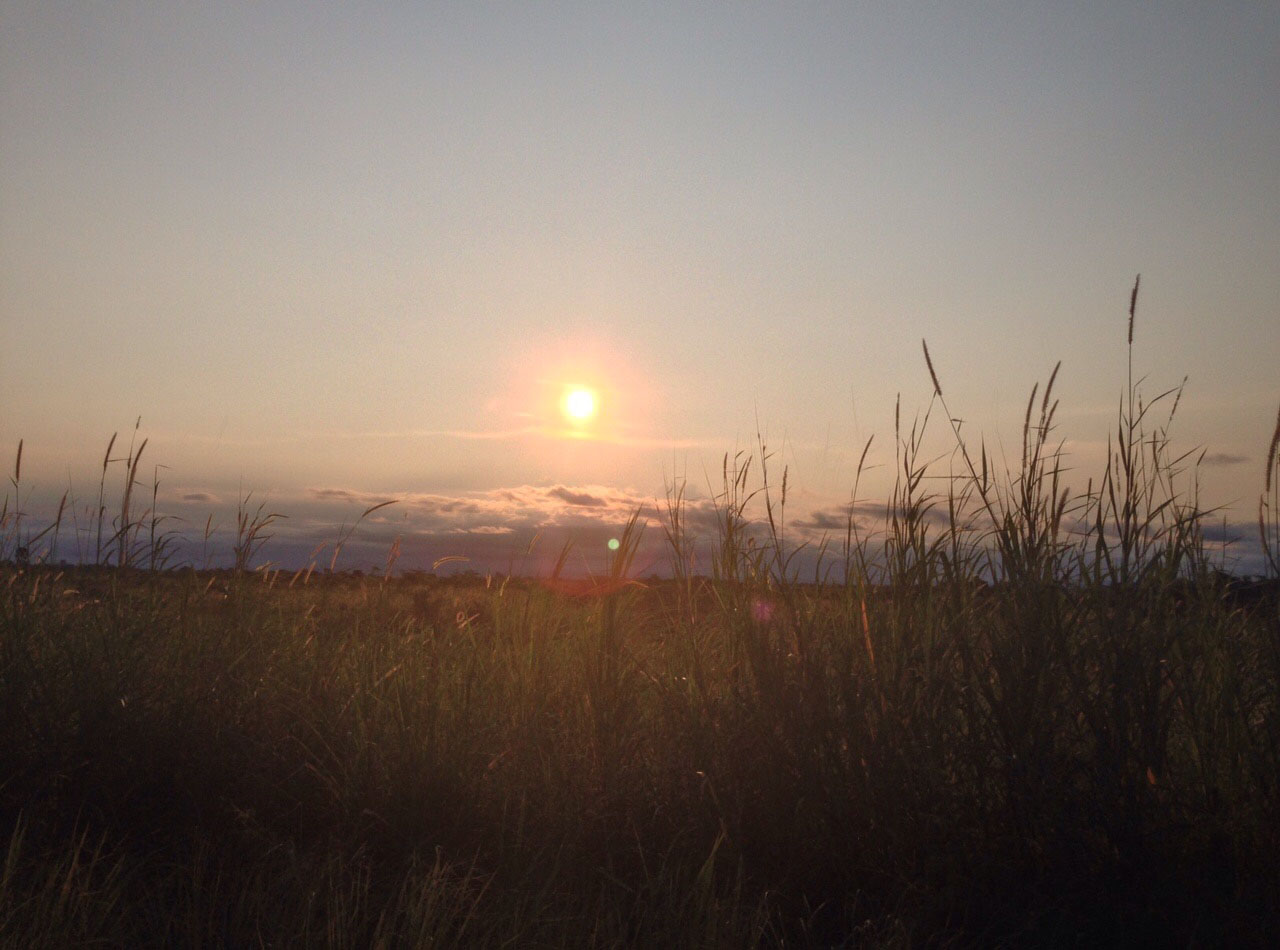 In order to obtain the right price I usually ask someone unrelated before I bargain. I mean, if I'm buying some fruit I just pop in the question: "how much is transport from here to Bamanda?" And since someone selling fruit doesn't profit from transport prices I get the "right price" and know what to aim for. It's simple and it works. 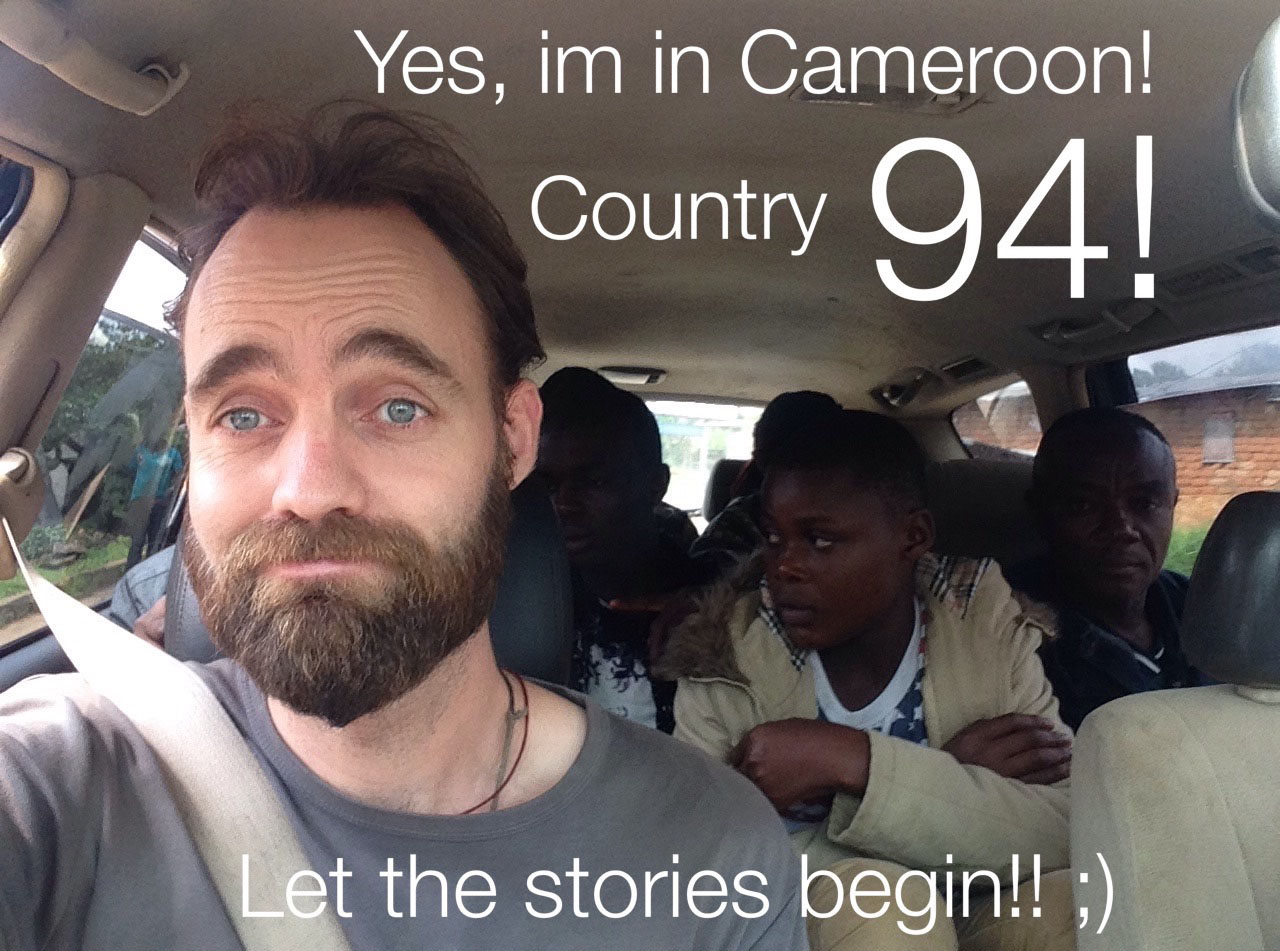 You can fit a lot of people into a vehicle!! You would be surprised!! I feel that I have seen stuff. But sometimes I still get to see stuff that raises my eyebrows. I mean, in Jamaica or in the Dominican Republic they had certain skills regarding fitting far more people into various vehicles then there were seats available. And somewhere between the Caribbean and Central Africa (oh yeah, by the way, welcome to Central Africa. West Africa ended with Nigeria) the various cultures represent different ideas regarding transport. In both Nigeria and Cameroon they know how to optimize the economy on public transportation. It's good logistics but the breaks, the suspension, the steering and much more is not adjusted to that kind of weight. Especially as cargo is also loaded on top. Oh well... 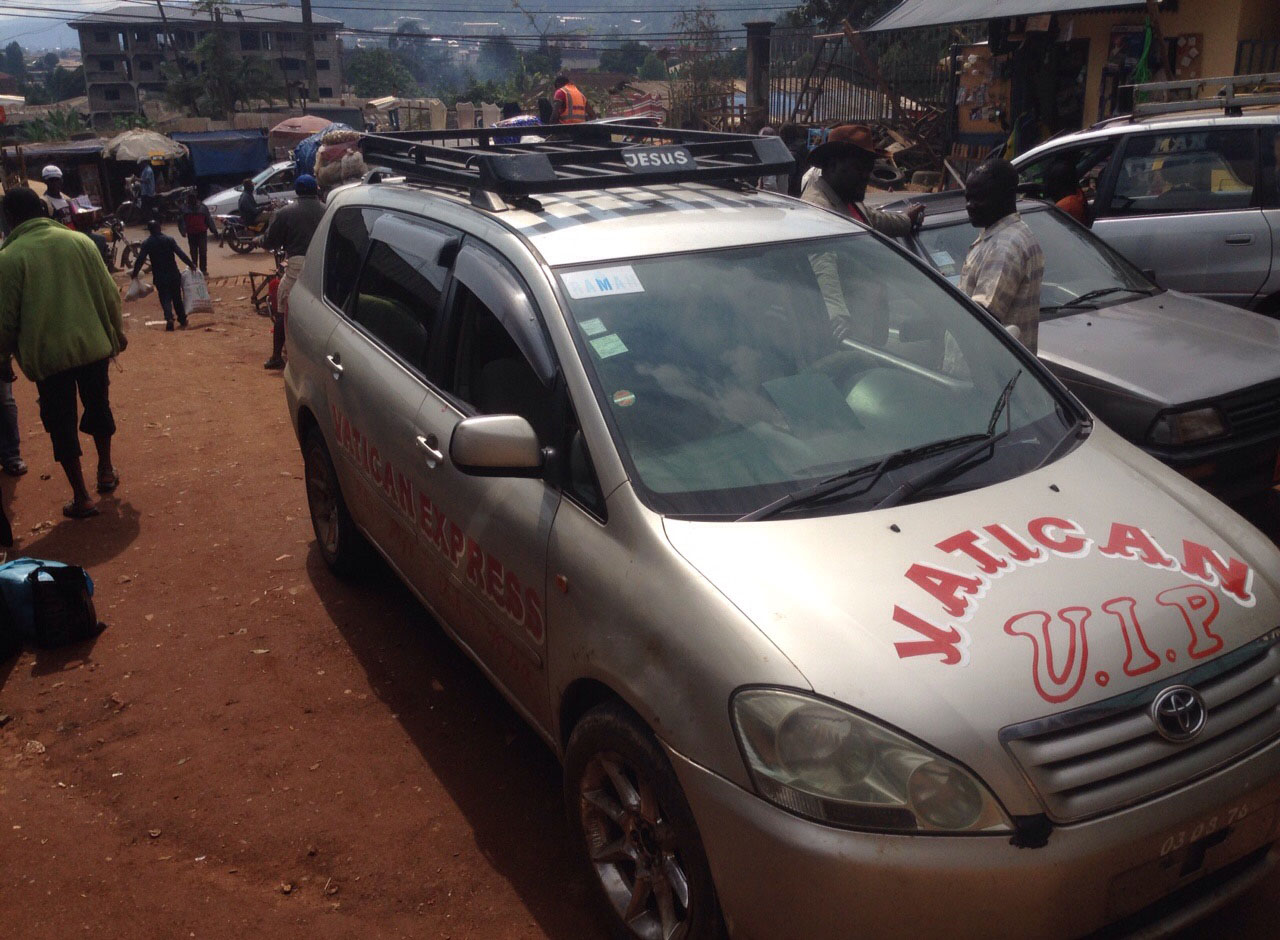 The "Vatican Express" started out with prayer and continued with load Christian music for everyone to enjoy. Through all 7 hours.

Bamenda is a lovely and lively city within serene surroundings in western Cameroon. The west of Cameroon was an English colony while east was French. And that reflects in the language today. But it is further more estimated that somewhere between 230 and 282 linguistic groups exist within "Africa in miniature". Yup, Cameroon has been nicknamed that. And it is a special country which I find hard to compare with any other I have visited. 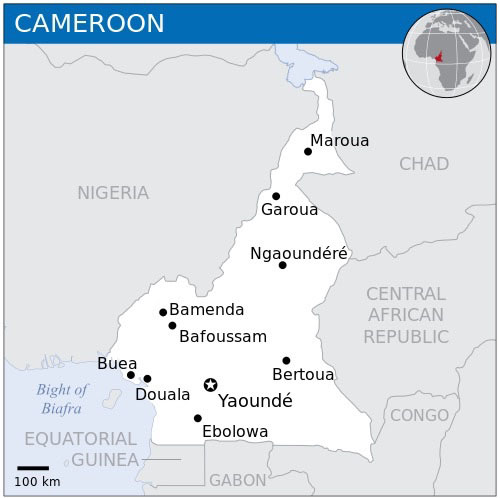 The north, the east, the south and the west are completely different from each other. And in spite of the differences Cameroon is a relatively stabile and peaceful country. I'm going to be seeing a lot of Cameroon because of the logistics of this project. But more about that later. 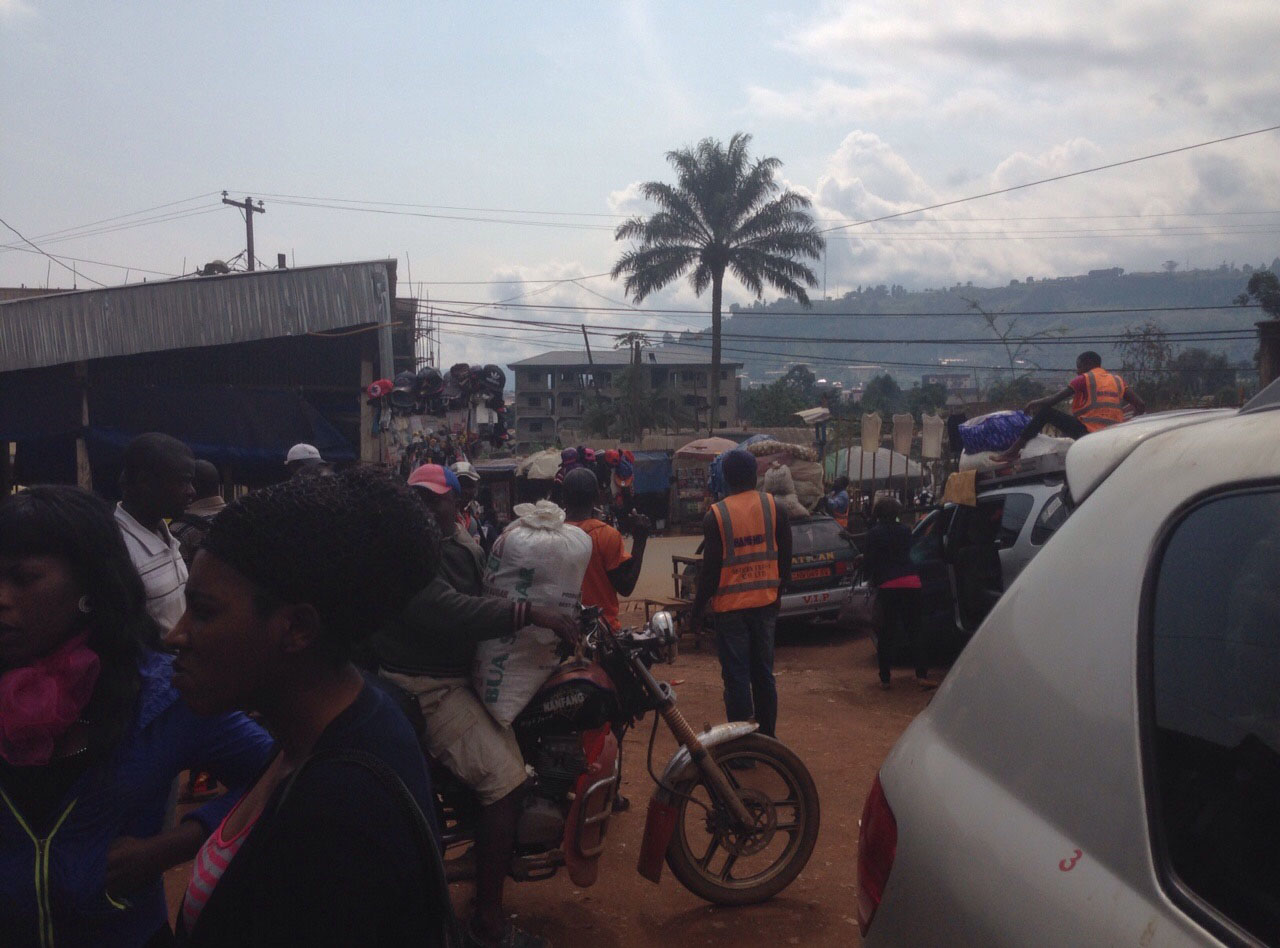 In Bamenda I was ready to continue to Yaoundé although I was tired. It was 11:00am so I was only 13 hours behind Cosmas' calculations and still far from Yaoundé ;) Around this time Emanuel approached me and said: "Yaoundé?"

You see, anytime you press your fragile body into a crammed little minibus, you will find that you become family with everyone around you. Everyone inside will share food, sing, sleep and defend each other from any "outsiders". 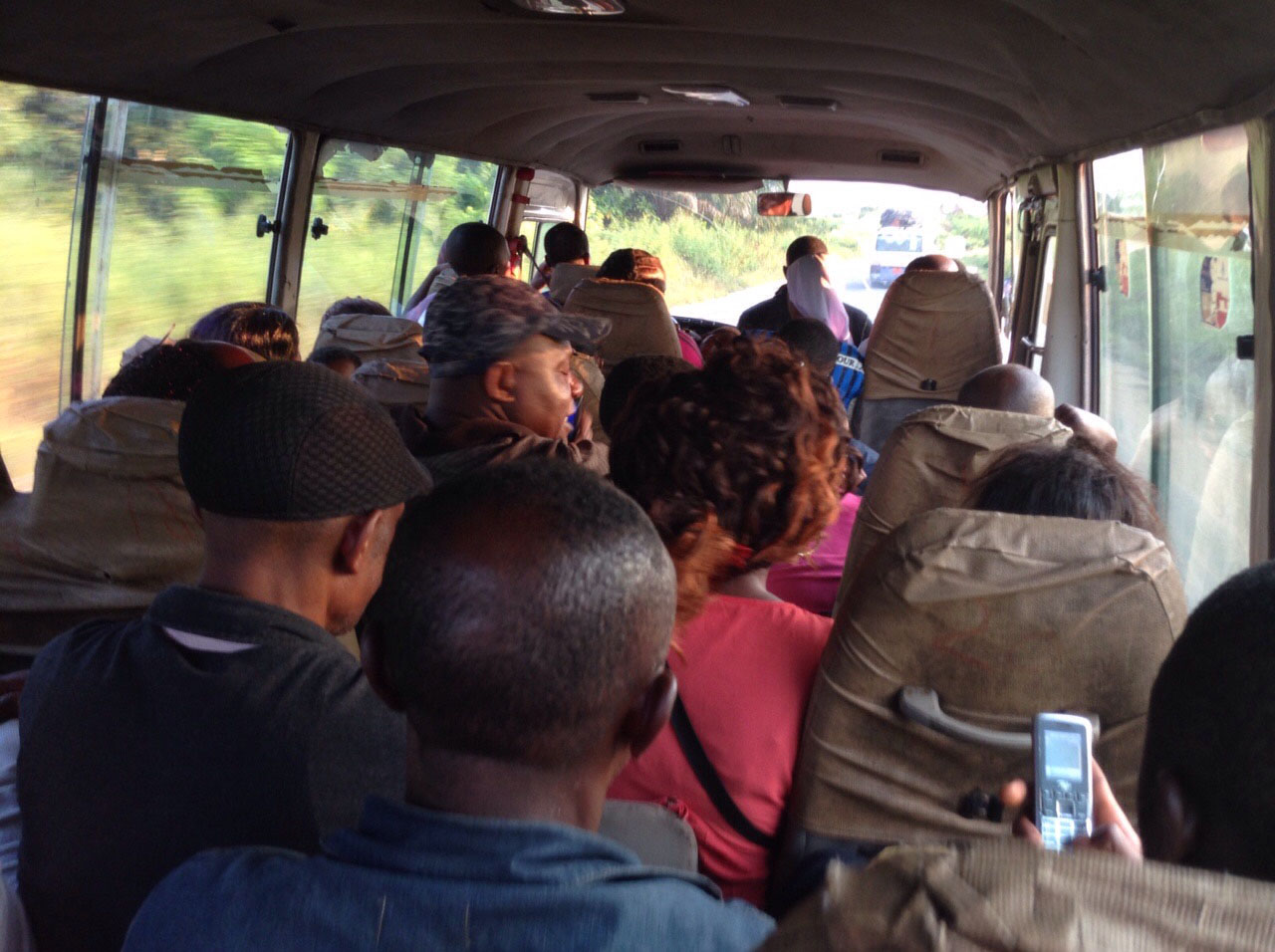 Somehow we always have room for one more?

I never noticed Emanuel after I crossed the border in the middle of the night. But he was sitting in the back of the "Vatican Express". Emanuel was going to Yaoundé too. So I followed him and we both got on the back of a motorcycle - which then crashed (in slow motion) because the driver wasn't very experienced. 20 seconds later we were on a different motorcycle! You would be surprised how quick somethings workout!! We caught up with the bus (which had left 5 minutes before we arrived) and then 7 hours later we arrived in Yaoundé. 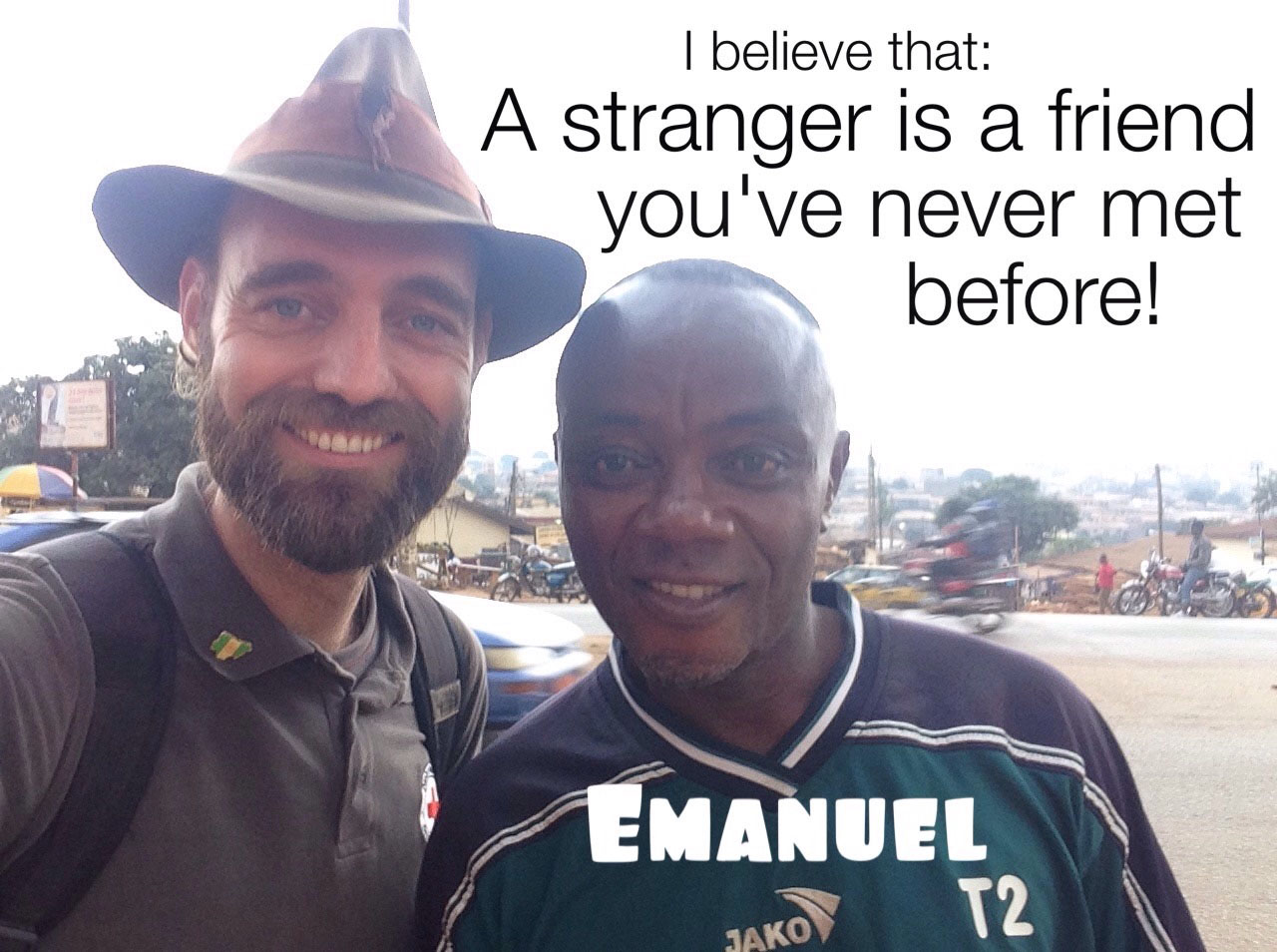 Emanuel, who likes to be called "Emotion", showed me to a cheap and safe guesthouse. And that was it. Well, not quite...because the next day he showed me around and helped me with taxis all day so that I got to go everywhere I needed to go. And in the evening, when I visited "Emotion" at his home, his wife Glory simply wouldn't let me leave!! Not until they had seen me eat some chicken ;) 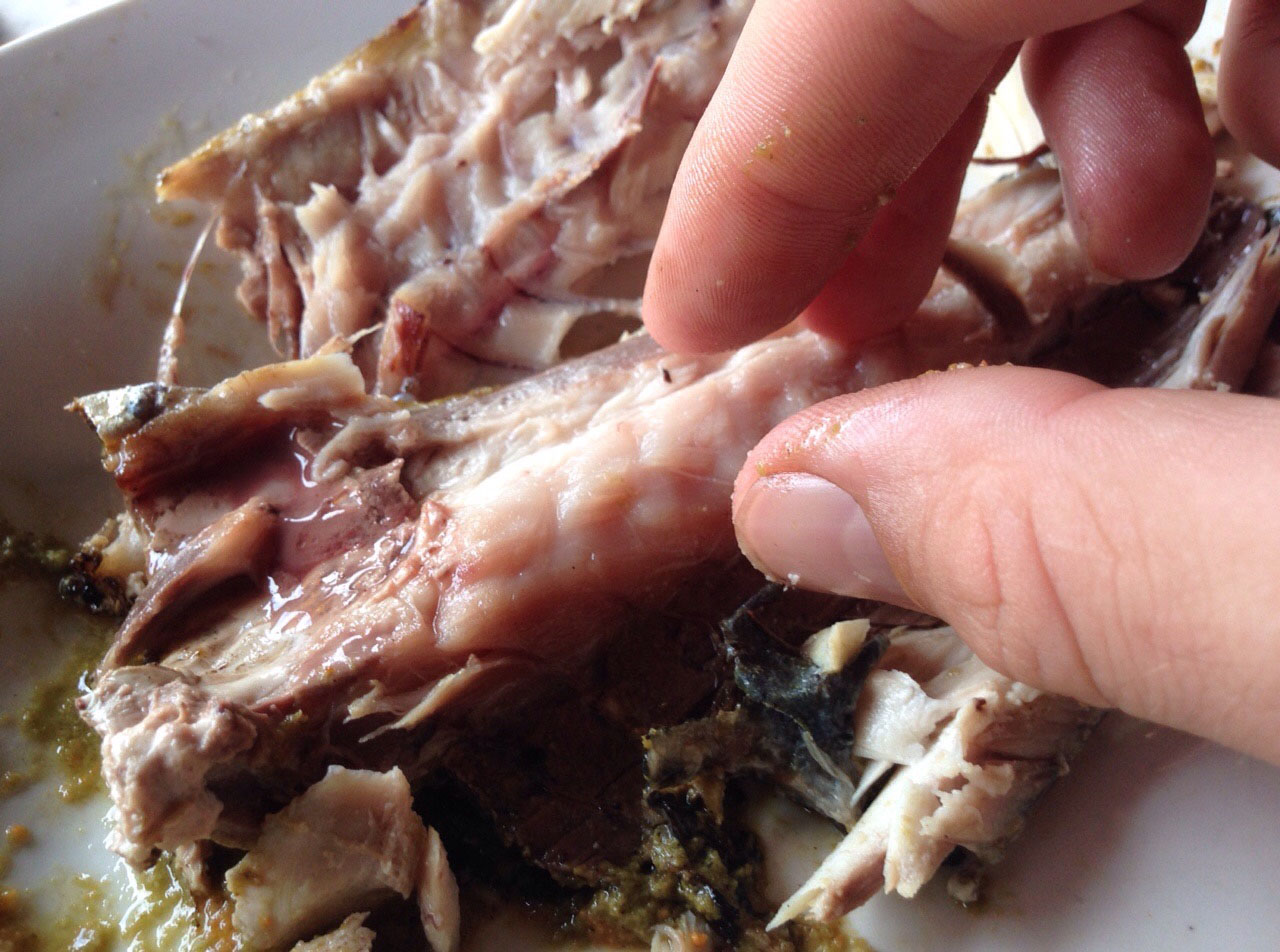 Call me crazy? But I actually feel like I'm more aware of what I'm eating when I use my fingers and feel the texture and the bones?

Yesterday afternoon I stopped by his place again. A very simple place. But it's enough for them. It was about to rain and I just stopped by to say goodbye since I was relocating to a cheaper place (a new friends house). He immediately jumped up and offered to carry my bag and negotiate a taxi for me. With a smile I told him to sit down but ever since I arrived to Nigeria...and it seems to continue in Cameroon...people have been unbelievably stubborn!! :) There was no arguing. As we walked towards the main road looking for a taxi it started pouring down. But Emanuel wasn't discouraged :) 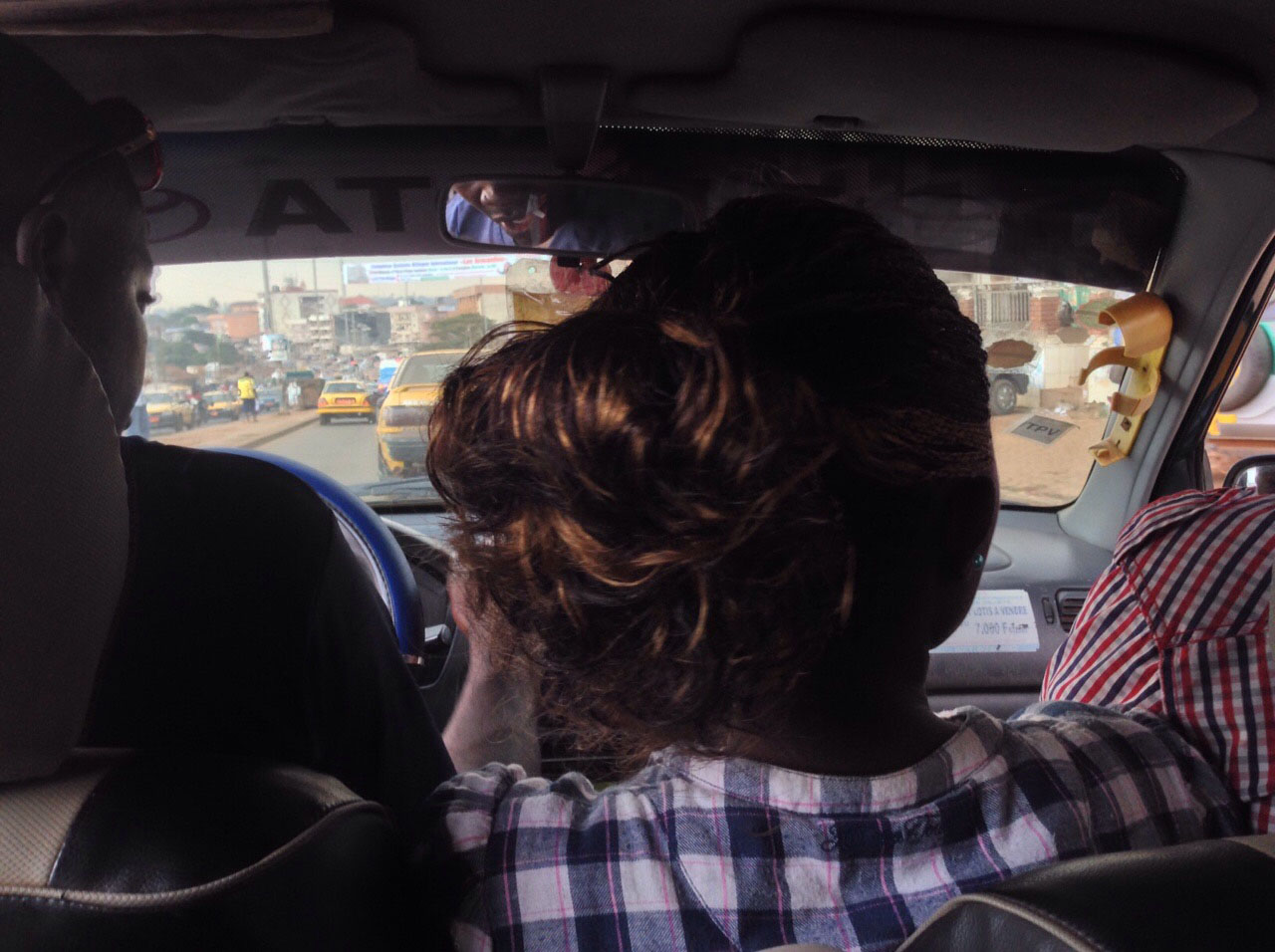 I would like to think that I am special and that people just behave friendly and helpful around me. But it's statistically implausible! I haven't yet reached 100 countries but I think it's a safe call: most people are good well meaning and represent the majority of humanity. And that's pretty wonderful. If you have that in mind the next time you go shopping and find yourself looking at the people that stand in line with you...then the world might just change a little bit :)

The next step of the Saga involves a train! Weeeee :)