Congo Republic - so, what happened? Magic?

I've mentioned before that I at times fell as if I'm almost being lifted up and carried forward by some force. Even in the most impossible and hard situations there has always been a solution. And even during the coldest and darkest nights there has always been a bed. I sometimes feel like I will succeed whether I want to or not...as if I'm being pushed forward. And as far as "luck" goes: I certainly find that the harder I try the luckier I get ;)

Foreign relations between Congo Republic (Congo) and the Democratic Republic of Congo (DRC) are however not desirable to me. The Congo River stands as a watery guard between the two nations and you can easily see the skyline of Kinshasa in DRC from Brazzaville in Congo. It's only 3 km apart. In the high north of Europe where I'm from Denmark is separated from Sweden by water. We fought bloody wars for centuries but today a bridge stands as a link between our two nations. I've even heard of plans to connect Copenhagen (the capital of Denmark) with Malmø (large Swedish city just across the water) by building an underwater metro passage. If successful it could connect the 2 cities by a 5 minute metro ride.

Congo and DRC: What are you waiting for? Connect your two cities and grow strong together! Oh well...I guess they won't finish that bridge this week.

I've been sitting at the edge of my seat with my bags packed and my hopes high everyday throughout the beginning of this week. Just 1 phone call and I would race to the embassy for my visa and race to the "beach" to catch a ferry across. But that call never came. Unfortunately being in a situation like that has kept me locked down and unable to go anywhere in the hope that I could be released any moment. So just 5 more minutes...5 more...5 more...5 more... There goes that day.

The embassy of the Democratic Republic of Congo. A building I have been in and out of a lot.

As the week progressed I began working on the notoriously difficult visa for Angola. And eventually my friends at the French Red Cross (FRC) would have the situation as much under control as humanly possible for the DRC visa. So I could start moving around for a bit and make my time in Brazzaville useful. Across the Congo River the FRC would be in close contact with the foreign ministry which had now informed us that the matter of my visa would be decided at a committee. In Brazzaville my friend Jérémie, also at the FRC, had received the phone number of the person who would eventually get the green lights at the embassy. This enabled me to move around freely as we would now get solid information. Because at this point I had already been to the embassy several times on occasions of false alarm. Time waisted. 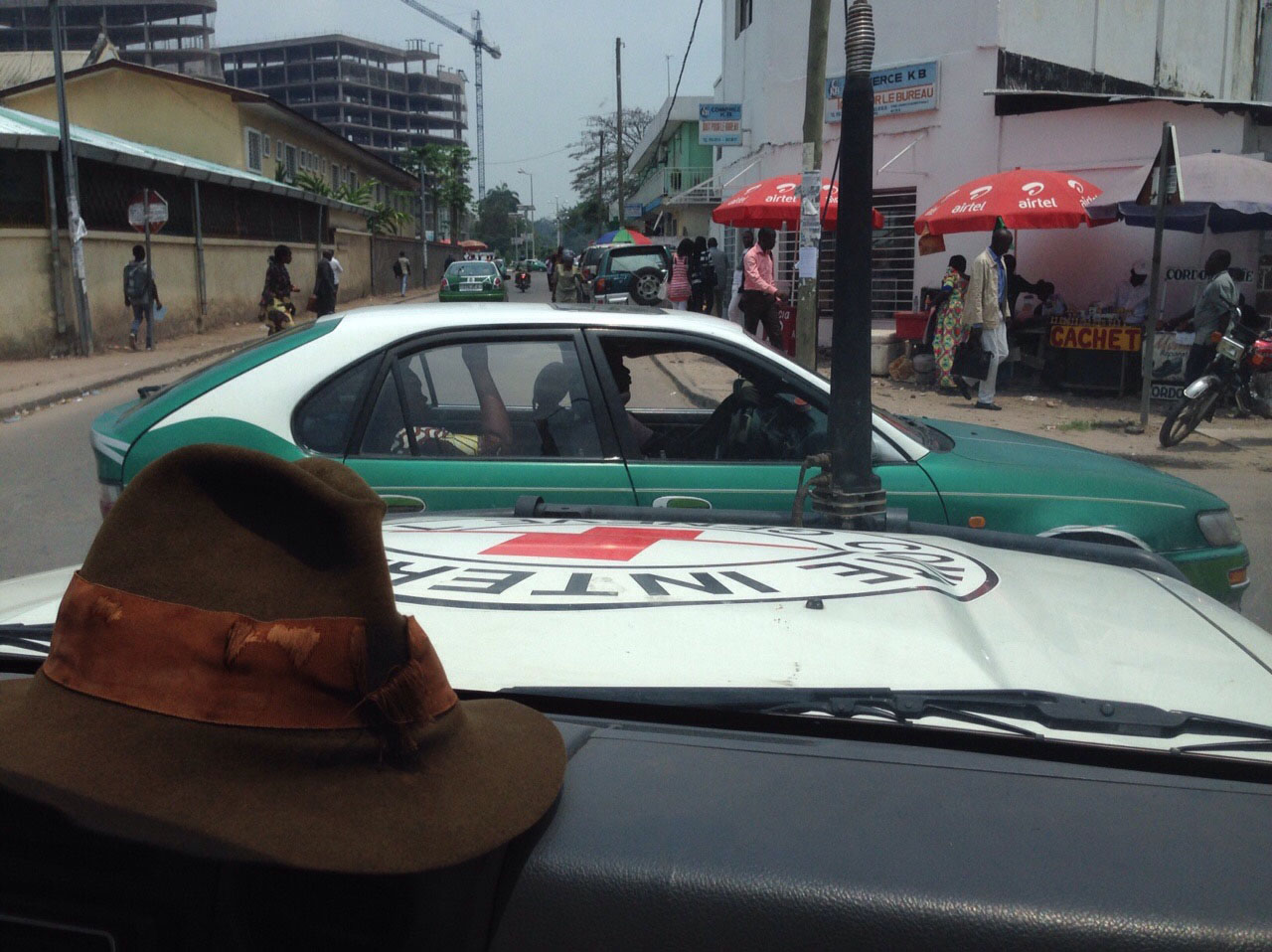 It leaves me thinking? Could this project be completed without the Red Cross? Could the Red Cross complete this project without me? Probably yes in both cases. But the solutions would be vastly different and in tough spots like this I think the current combination is priceless. One day everyones cups shall be held high!! :) 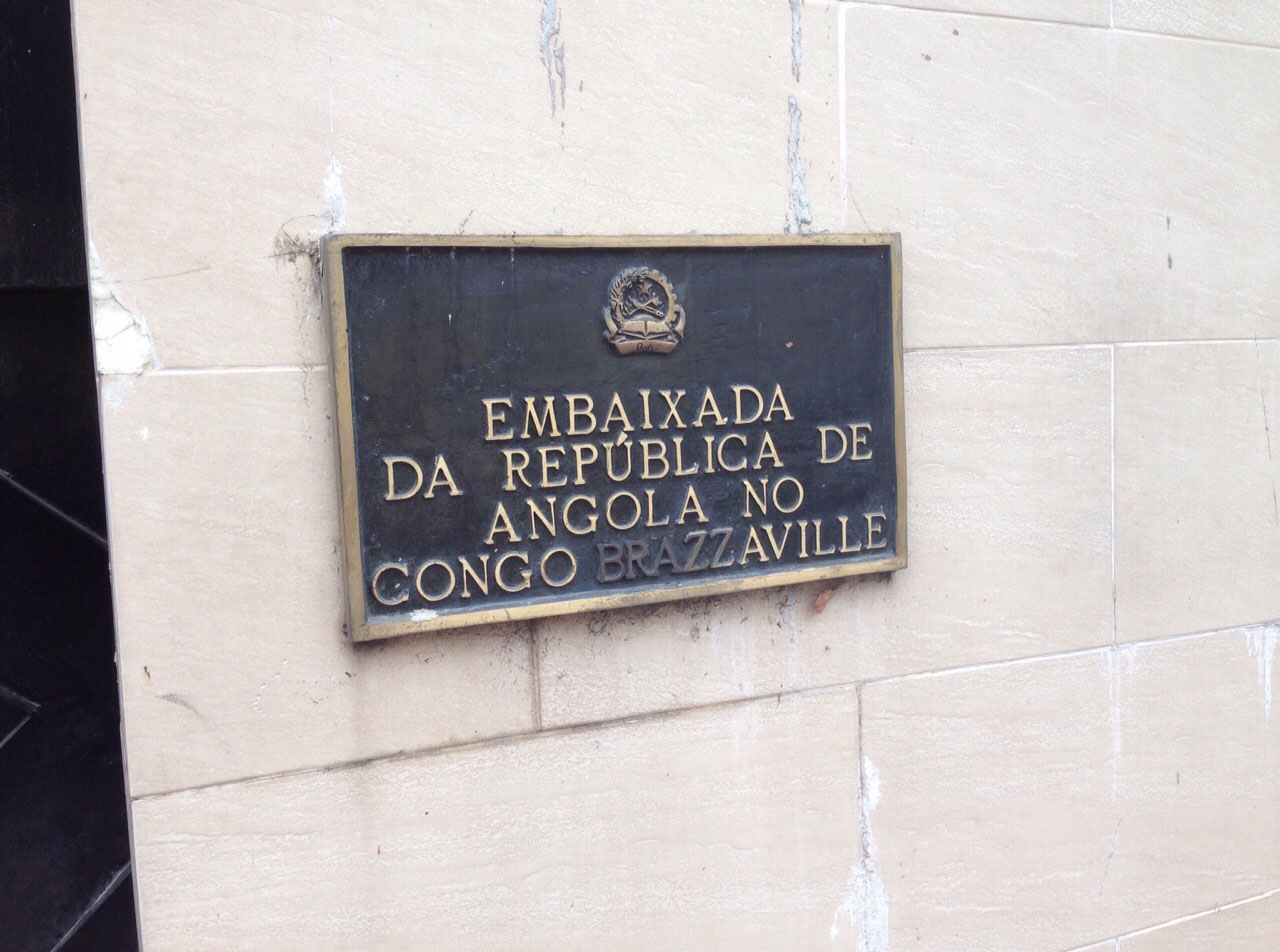 I ended up having a lot of fun with the people at the embassy :)

My first meeting with the embassy of Angola had me back out the door pretty quickly! My copied documents were all black and white and they wanted color copies! Also they wanted the letter of invitation (which was created in Angola) in original - how do you do that? Finally I didn't speak French so I was told to come back when I did or had someone with me who could. I still left smiling though. 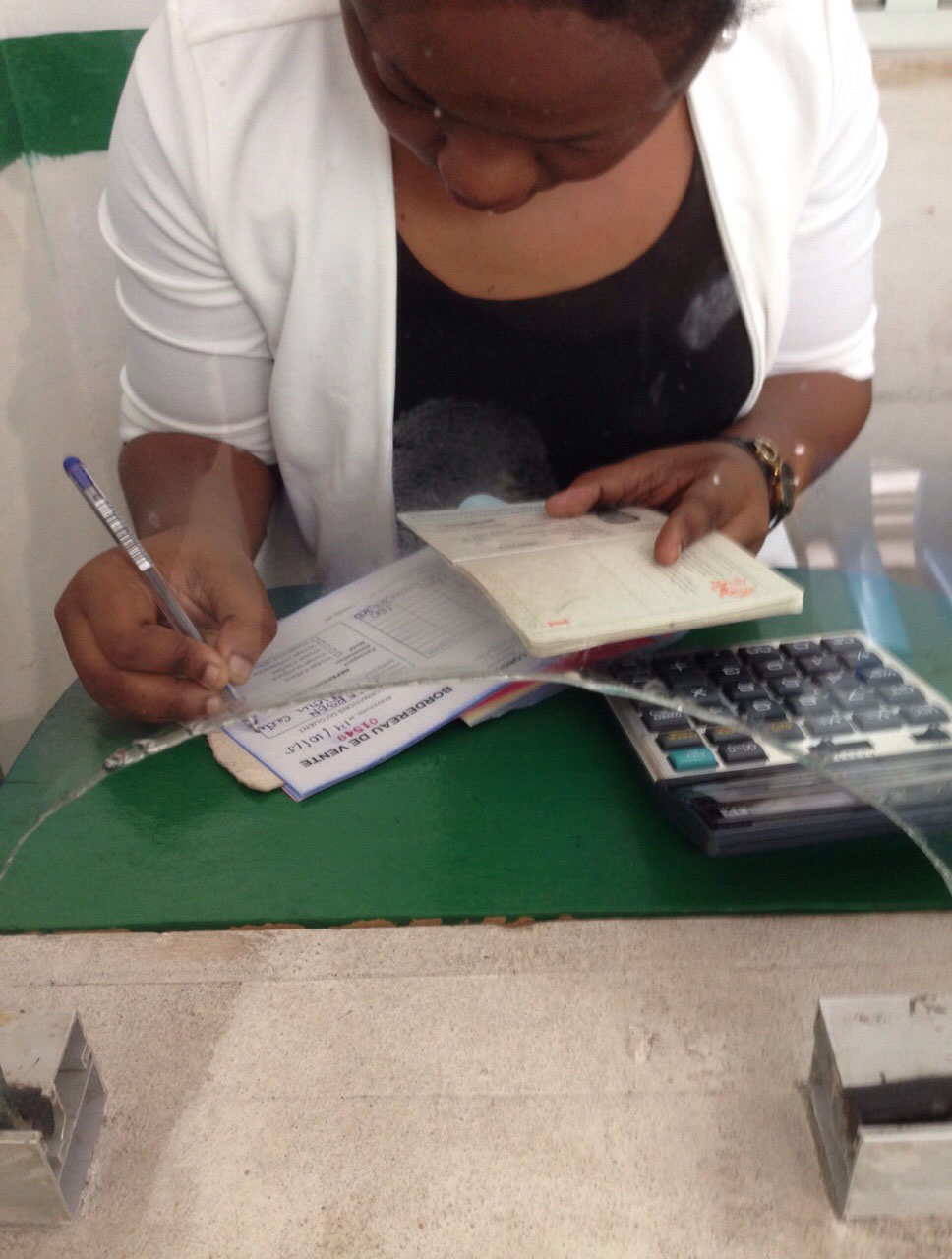 So, the bank account only accepted USD and the bank couldn't exchange? That added a trip to an exchange office and a greater loss on currency.

The next day I entered the Angolan embassy along with Marie. Maria is also FRC and is half Lebanese and half French. If you have any idea about the Lebanese cuisine or the reputation of French woman in general then you know how great a combination that is!! ;) It was a completely different story. Marie charmed everyone in the room and I ended up doing selfies with the security guards. This time we were sent away with notice of coming back with a formal letter addressed to the ambassador regarding my application. So we did...a few hours later. Now I was asked to make a payment of $150.00 in a specific bank downtown. So I did. Then I was told that my photos were not okay because I was wearing a t-shirt at the time of the photograph. So I switched them out with two other photos which were accepted. Then I was told that they would call me. 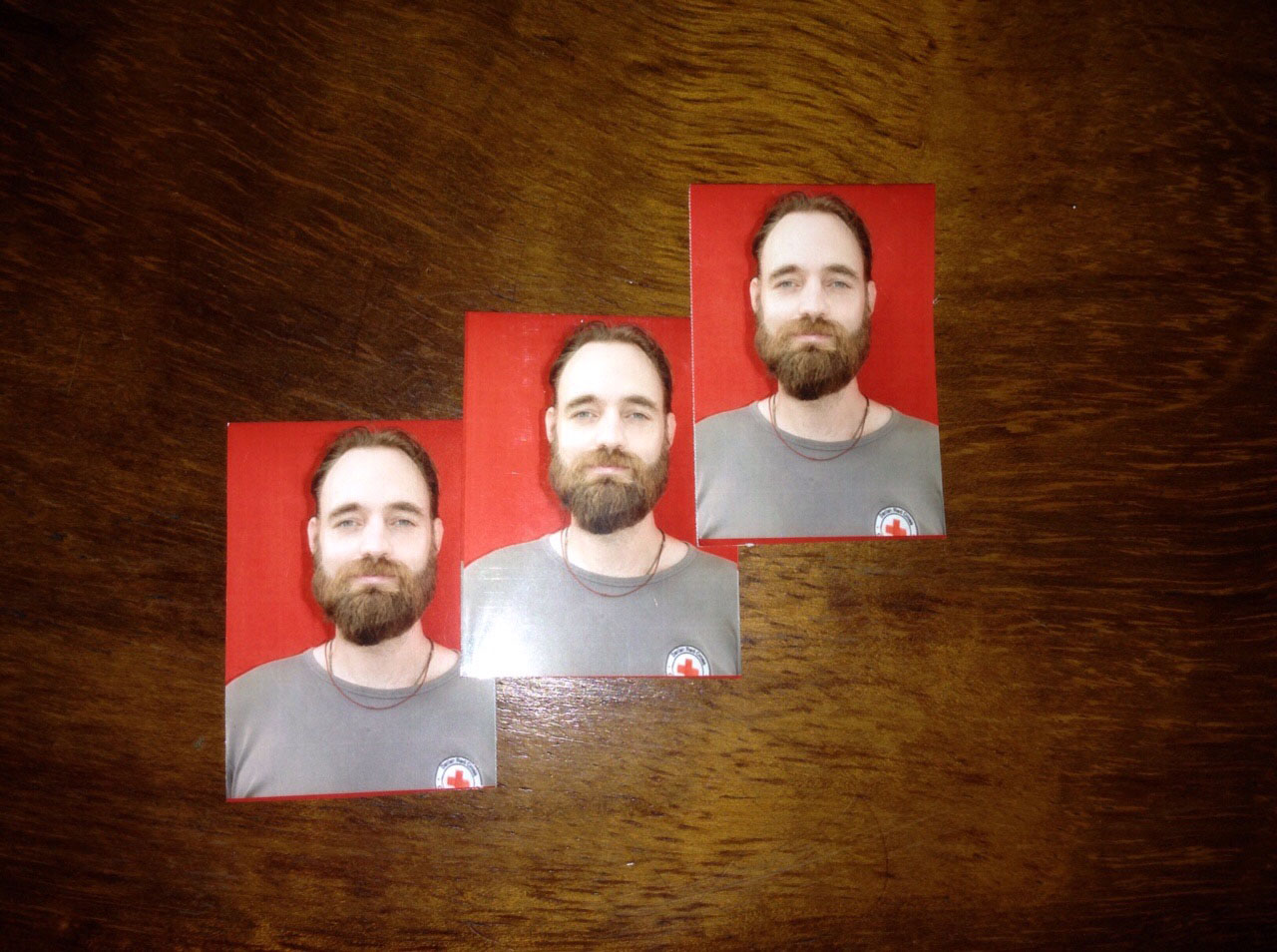 The passport photos which were not okay.

And yabba dabba doooo!!! The very next day I had my visa for Angola. It only took 3 days. I get by with a little help from my friends ;) Now this success is also largely because of the Red Cross and its worldwide reputation and involvement. And I'm ever so thankful for the letter of intent which was signed by Danish Secretary General, Anders Ladekarl, before I left the Kingdom of Denmark more than 2 years ago. Because that letter makes the project official within the Red Cross. And that's what I mean...a priceless combination. And I'm proud to be representing the movement wherever I go! :) 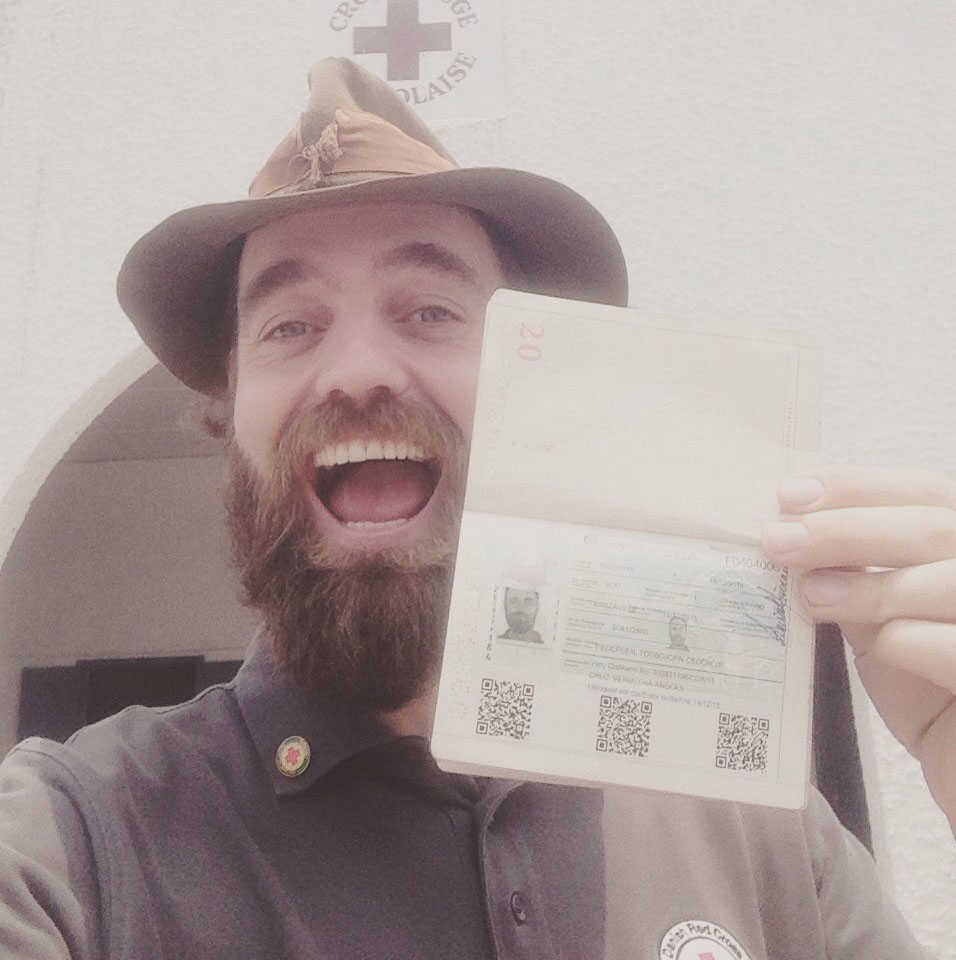 Another organization which carries out humanitarian work is Actions De Solidarité International (ASI). www.asa-france.org. I had dinner with Jérémie, his wife and a handful of their friends who are all expats in Brazzaville. That's where I met Pauline who works at ASI. She invited me to come by and so I did. You can watch as many documentaries as you want but it is when you get to see the hard cases of humanity at eye level you really understand something new. The work of ASI is mainly getting "ladies of the night" of the street and offering them an alternative to life. We are talking about girls younger than 18 years of age and some of them are 12 year olds with a baby in their arm. ASI works with a proven "5 phase" model which has already reached hundreds of young woman and changed the path for many. I'm not the one to whip out my camera and stick it in the face of someone vulnerable so I have no photos for you. But I urge you to support ASI by liking them on Facebook:  https://www.facebook.com/pages/Actions-de-Solidarit%C3%A9-Internationale/295993387090919

And suddently the road ends. Or does it begin? And behind that grey car to the left you find ASI.

My meeting with ASI had me leaving feeling confident that people like Pauline are working hard to change lives like that. And it shouldn't degrade Pauline's work to say that the Red Cross does the same work in other parts of the world. And it all has me thinking that if prostitution really is the oldest trade in the world...then what did the first "clients" pay with? :) 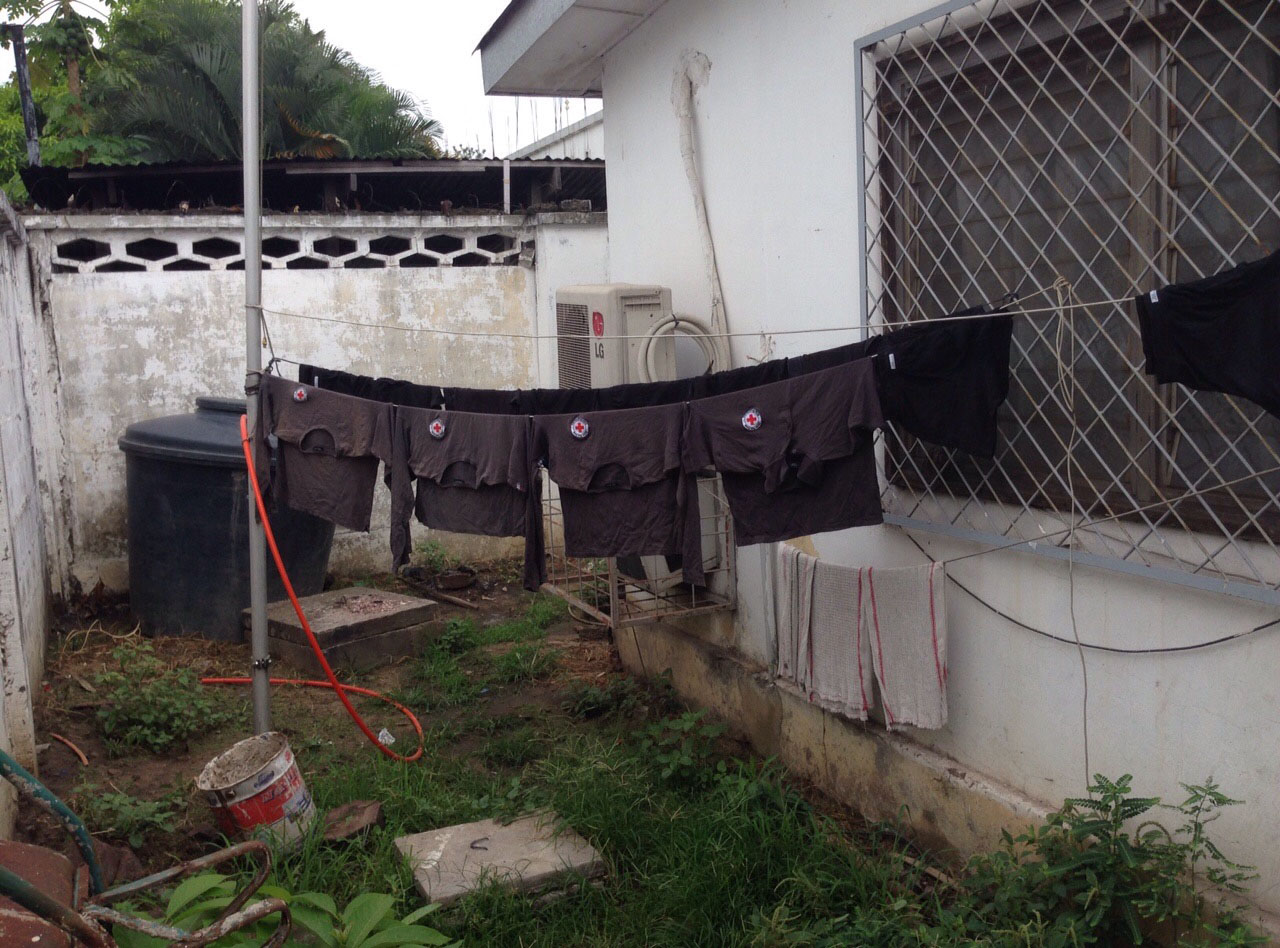 The Red Cross Red Crescent (RCRC) does the same kind of work many places in the world. There is plenty of online media to follow the RCRC but if you want the international Facebook group then click here: https://www.facebook.com/RedCrossRedCrescent
I'ts not that Congo is this hopeless country that needs as much help as it can get. Actually Congo is doing amazingly and the capital, Brazzaville, has a quite impressive downtown area. In my opinion Congo is forward thinking and allows support and help from NGO's in order to ensure a better future - and that could very well be the right recipe ;) 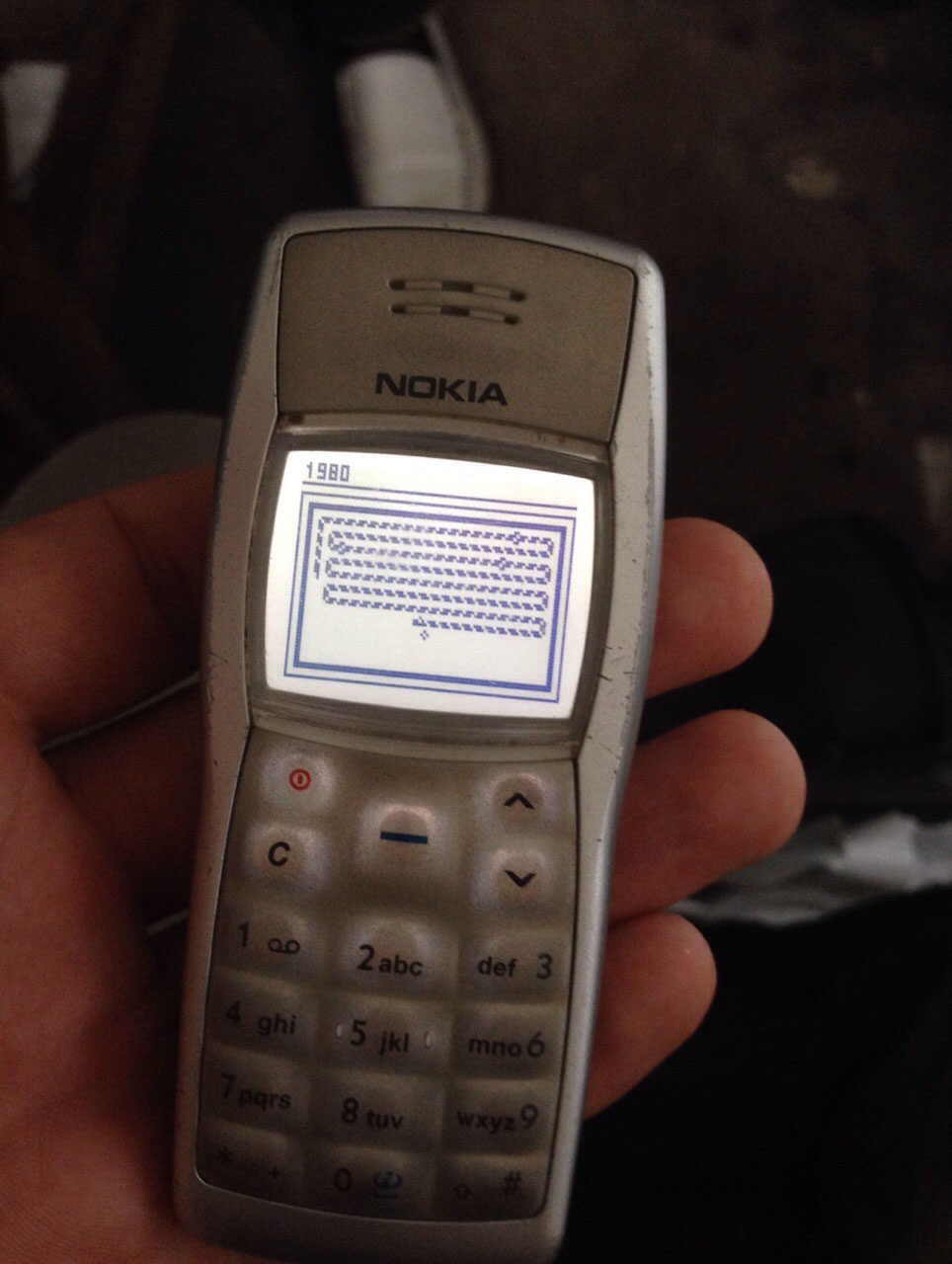 Any day now! Some day, in some waiting room I'm going to beat the highscore my girlfriend set back in June?
So as the days progressed I finally received good news from Nelly in DRC (FRC) through Jérémie in Brazzaville. The commission in Kinshasa had approved my application to apply for a visa in Congo and thereby not return back to Denmark (?) to get my visa from there. Apparently the long process to reach this decision is by some contributed to the hostile environment which exists between the 2 Congo's governments (how that involves a Danish citizen I do not know). But in any case I'm sure they will have a bridge connecting them someday :) 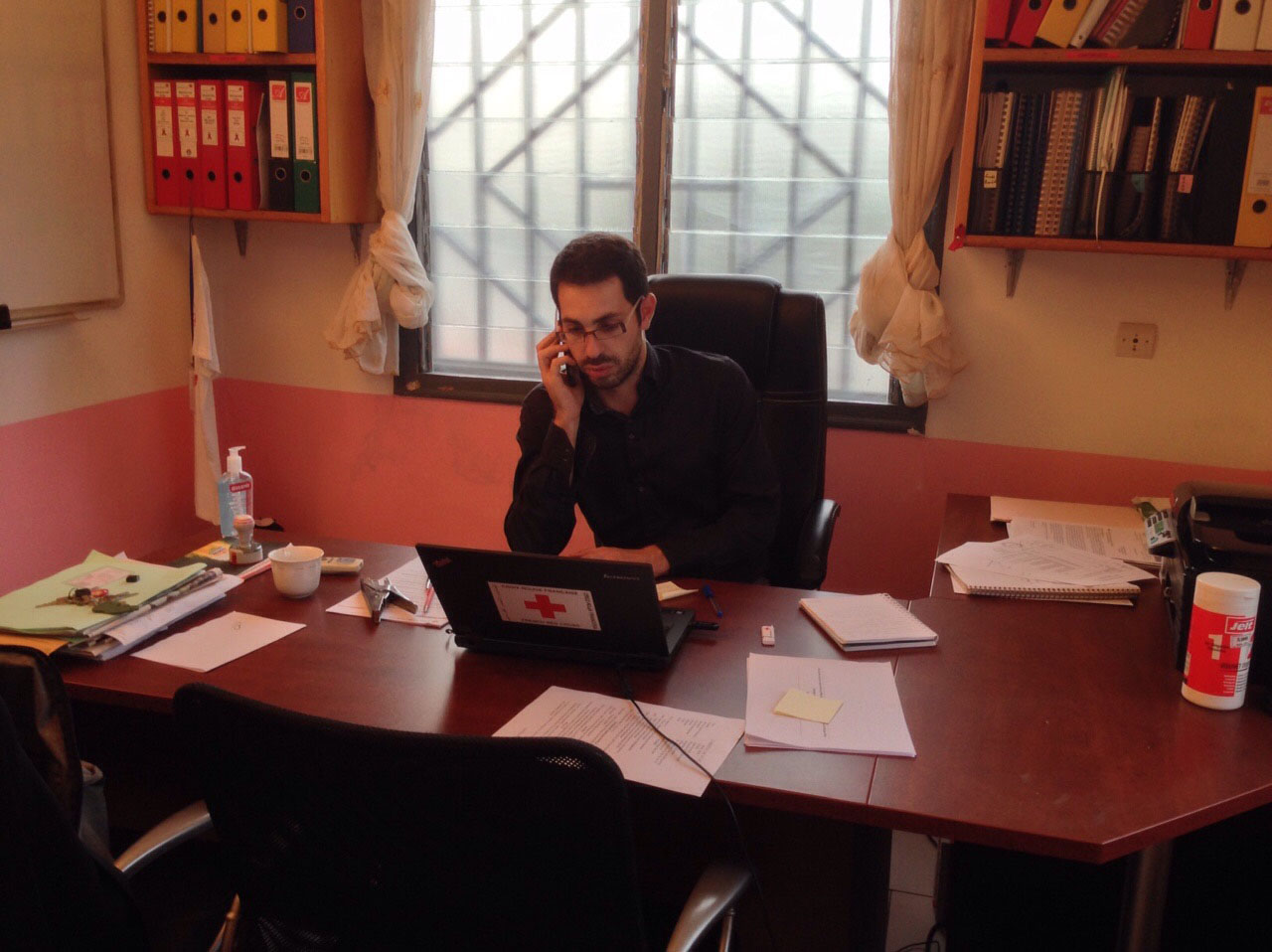 Mr. Jérémie in action in his office.
With the hardcore connection we now possess Jérémie could instantly call the right person at the DRC embassy to see if they could confirm the receipt of the commissions decision? "Not yet". So let's see what happens on this fine Friday?
"The best laid plans of mice and men..." The Saga is a logistical challenge of proportions!! I'm currently looking at all the letters of invitation that I have already received along with the visas I already have...and then I'm trying to figure out when they will all expire and how that will effect what I should do next?! The last few plans have gone bye bye long ago. It had me grinding my teeth for a few days but once again I have adapted and improvised. 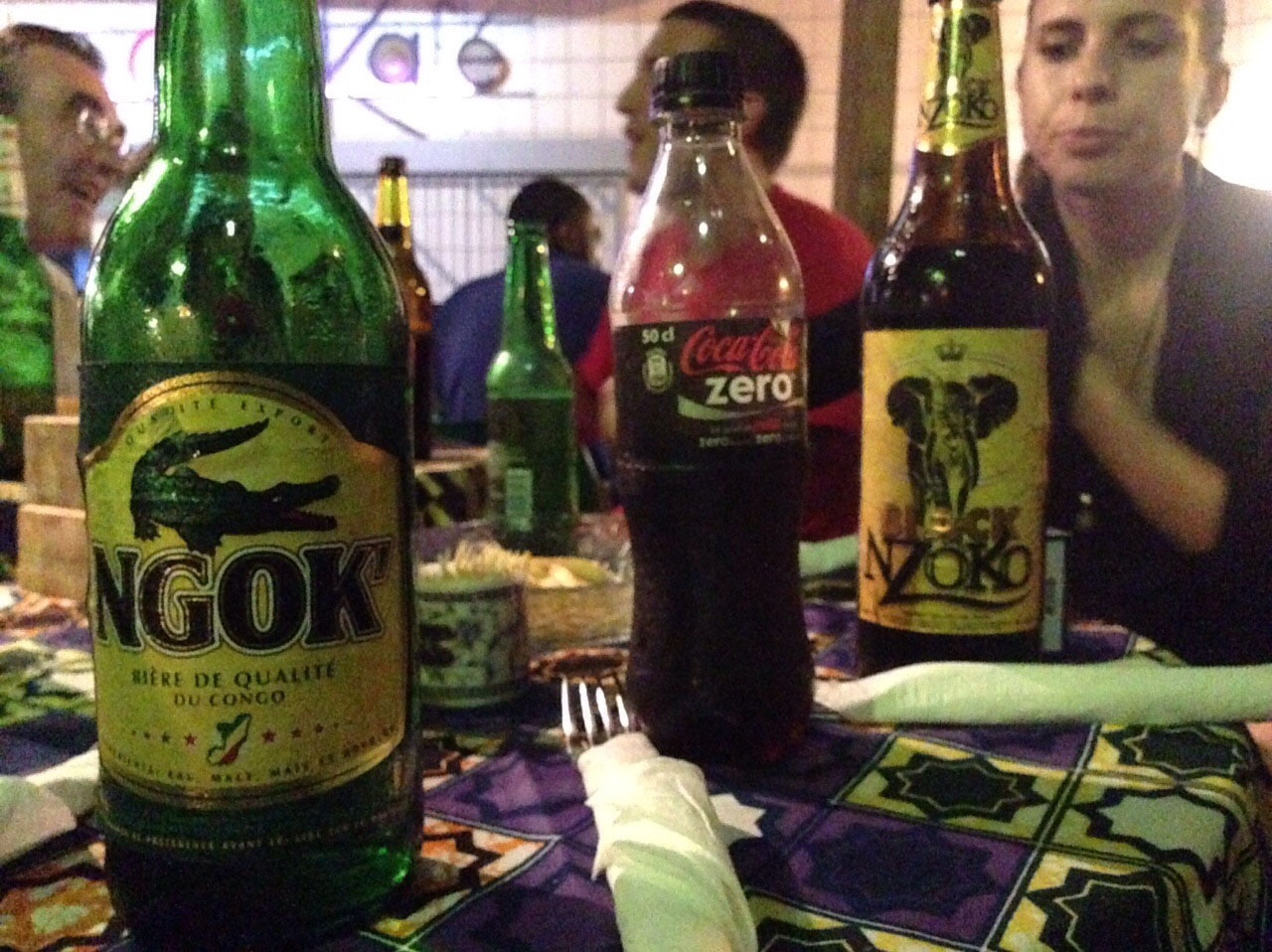 I had a few really rough days. And I certainly didn't want to go out for beer. But I said yes anyway and in good company I slowly started to feel better. Sometimes you need to say yes when you want to say no.
If I receive the DRC visa today and if I can cross the Congo River today then I think I could stay in Kinshasa until Monday. Then I should cross back over the river and immediately start heading for Gabon. In Gabon I can extend my visa so it lasts another month. Then I need to get a new visa granted for São Tomé which shouldn't be difficult since they are done online. Then I need to catch the ferry to São Tomé and soon after I would need to return to Gabon so I could get to Equatorial Guinea. But that visa is still an issue lying on my table...
What kind of magic is going to resolve that I wonder? :)
Best regards
Torbjørn C. Pedersen (Thor) - now relying on magic.