São Tomé is just beautiful - now how to get away?

View Comments
Back home in Denmark the weather has turned dark, grey and cold. I wish I was there 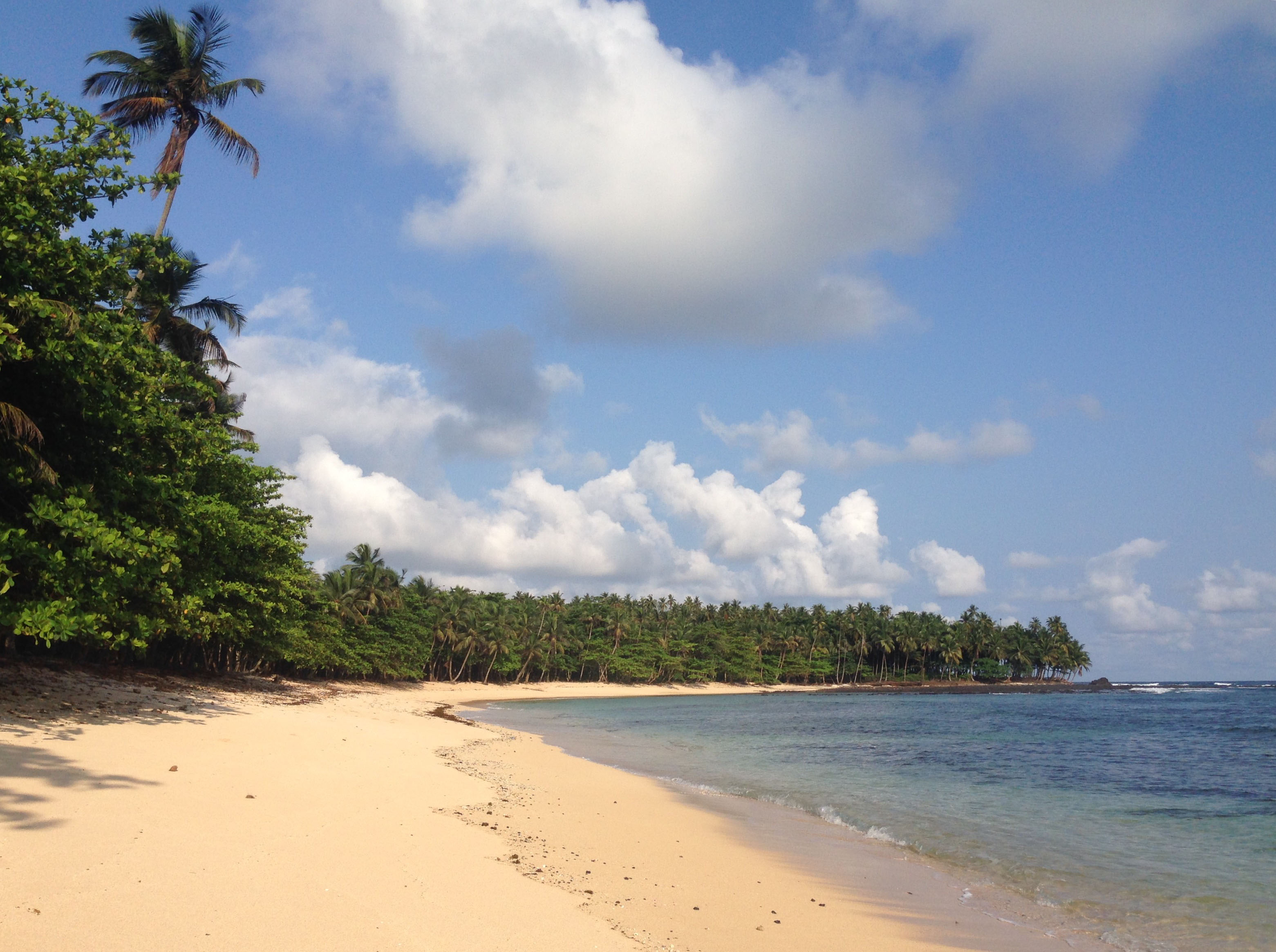 It has been said that for even the most attractive woman in the world, you will be able to find a man, who has become thoroughly tired of her. And here I am on one of the most picturesque islands of my life - and I want to get away.
To bring you up to speed I should go back to the days before my girlfriend arrived to the island. I had everything planned for her arrival in Libreville, Gabon. She had her visa and her flight ticket and a list of things I had asked her to pack. The only thing wrong was that I wasn't in Libreville. I was still in São Tomé.
My options for leaving São Tomé and crossing the 300 kilometer body of water were looking bleak. It was either a shifty, illegal, may-sink, small, heavy, propane-bottle-loaded, in debt, corrupted boat (which would surely get me into trouble at arrival)...or a very expensive highly risky pirogue ride across the large betraying ocean. Hmm...take your pick?
So I turned to the Swiss Honorary Consul, Reto Scherraus-Fenkart, a man I had been fortunate to meet a few days earlier. Reto is a gentleman and a man of action and he quickly sorted me out through his Portuguese based travel agency: Happylandings.travel. Reto is a man that delivers. He is charming and well connected. He immediately offered me his help with an extension of the Angola visa which will soon expire, and with contacting the ambassador of Guinea Equatorial here in São Tomé & Príncipe to see if that went anywhere? 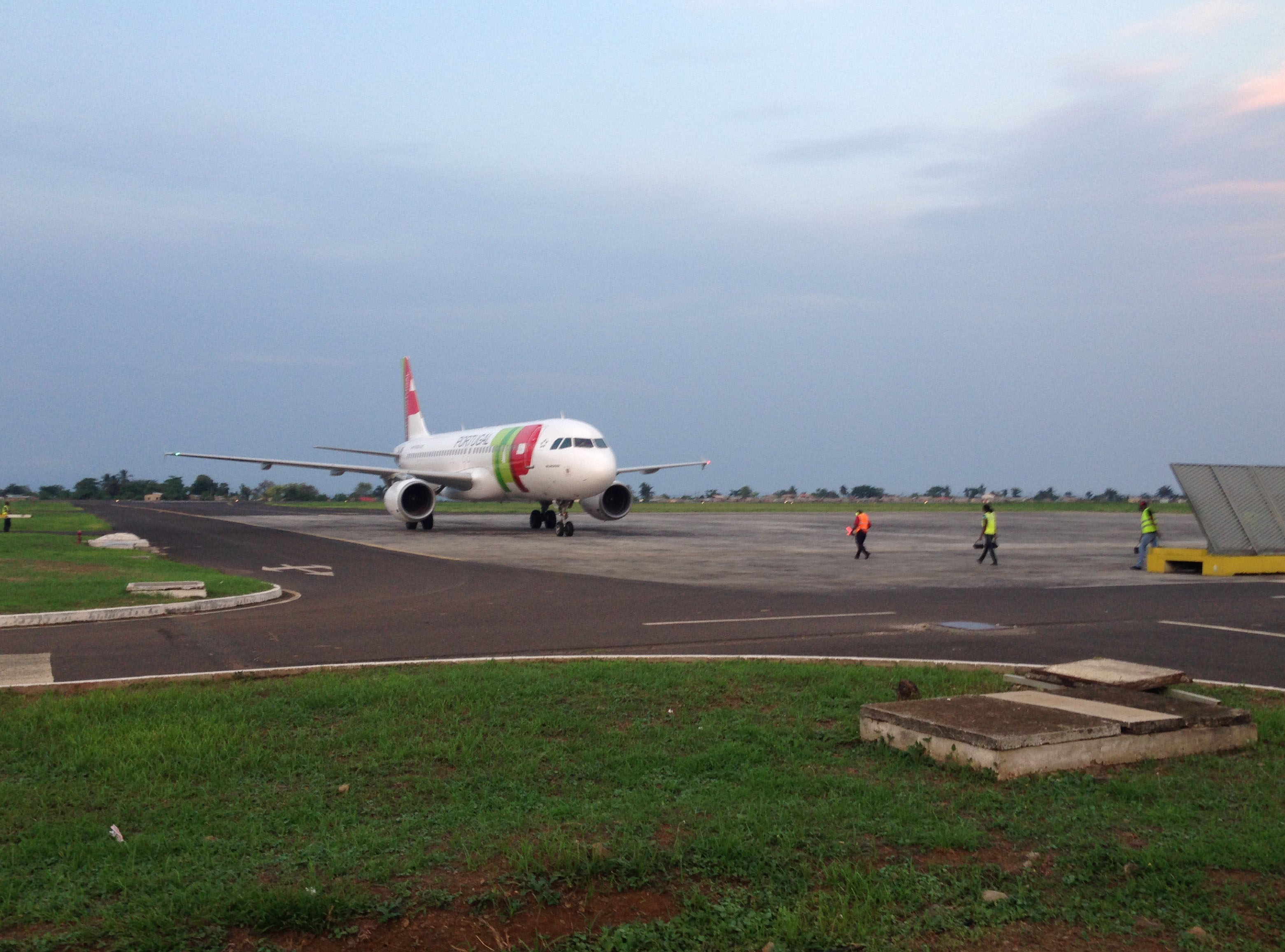 I was introduced to Reto through Christoph, a true master networker. Christoph will tell you that his business is dealing with scrap metal. And he is pursuing an incredible project which is to remove the many stranded vessels from the pristine waters around São Tomé. I would however say that Christoph's real job is networking. Christoph is pretty cool, calm and collected. But I fear that I might have met him at the wrong time. Because he is also extraordinary busy. 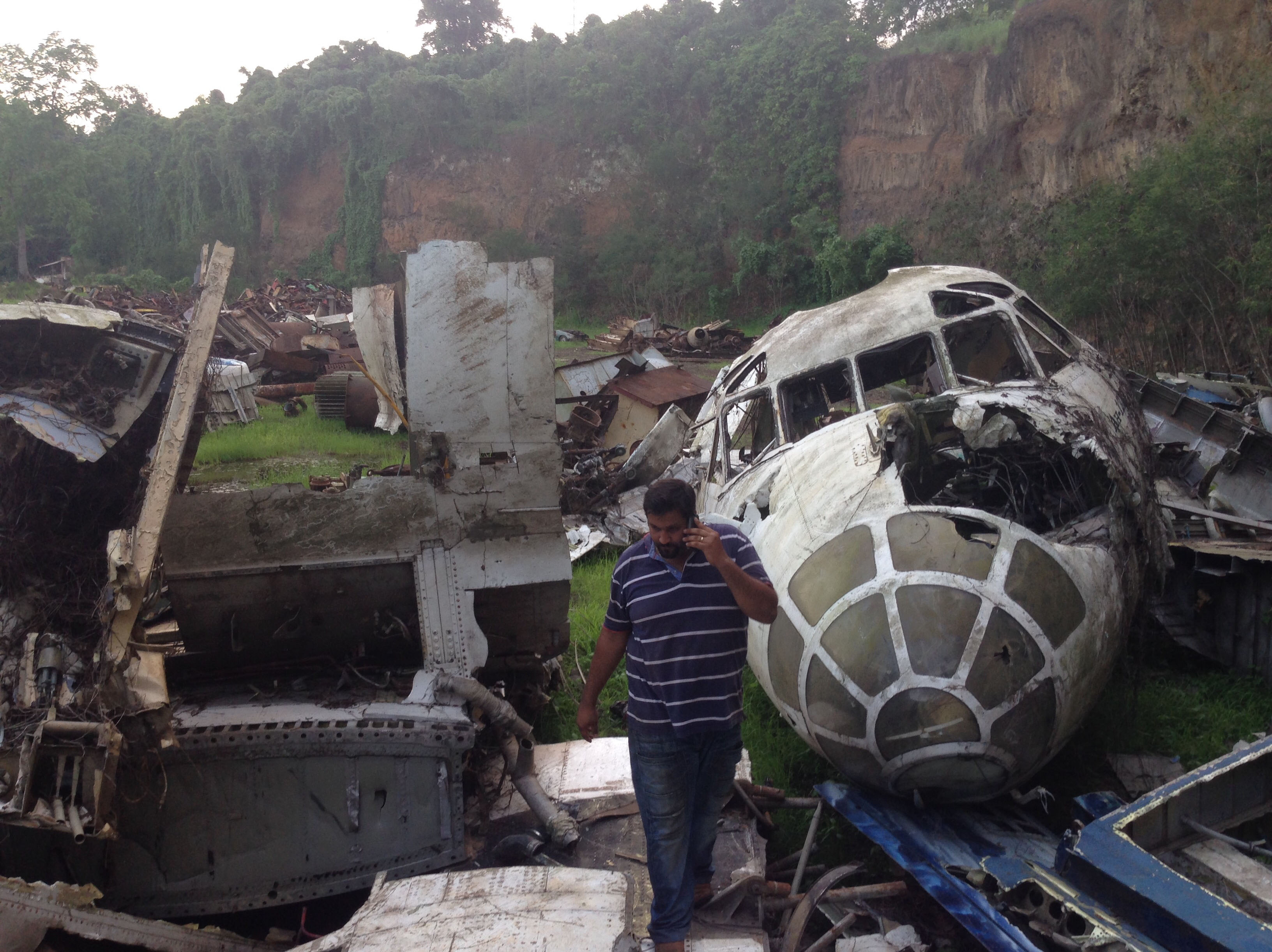 Christof on the phone. Not a rare sight ;)
Somehow Christoph has however still managed to be of great help and assistance towards me and this crazy Saga. He is German but speaks many languages including Portuguese so life is easier with Christof on my side.
And it was Christoph who convinced me not to risk the hazardous voyage and instead invite my girlfriend to come to São Tomé. And São Tomé is certainly the right setting for a romantic vacation!! I rented a car and booked us into the Praia Inhame Eco Lodge:
http://www.hotelpraiainhame.com/hotel-overview.html 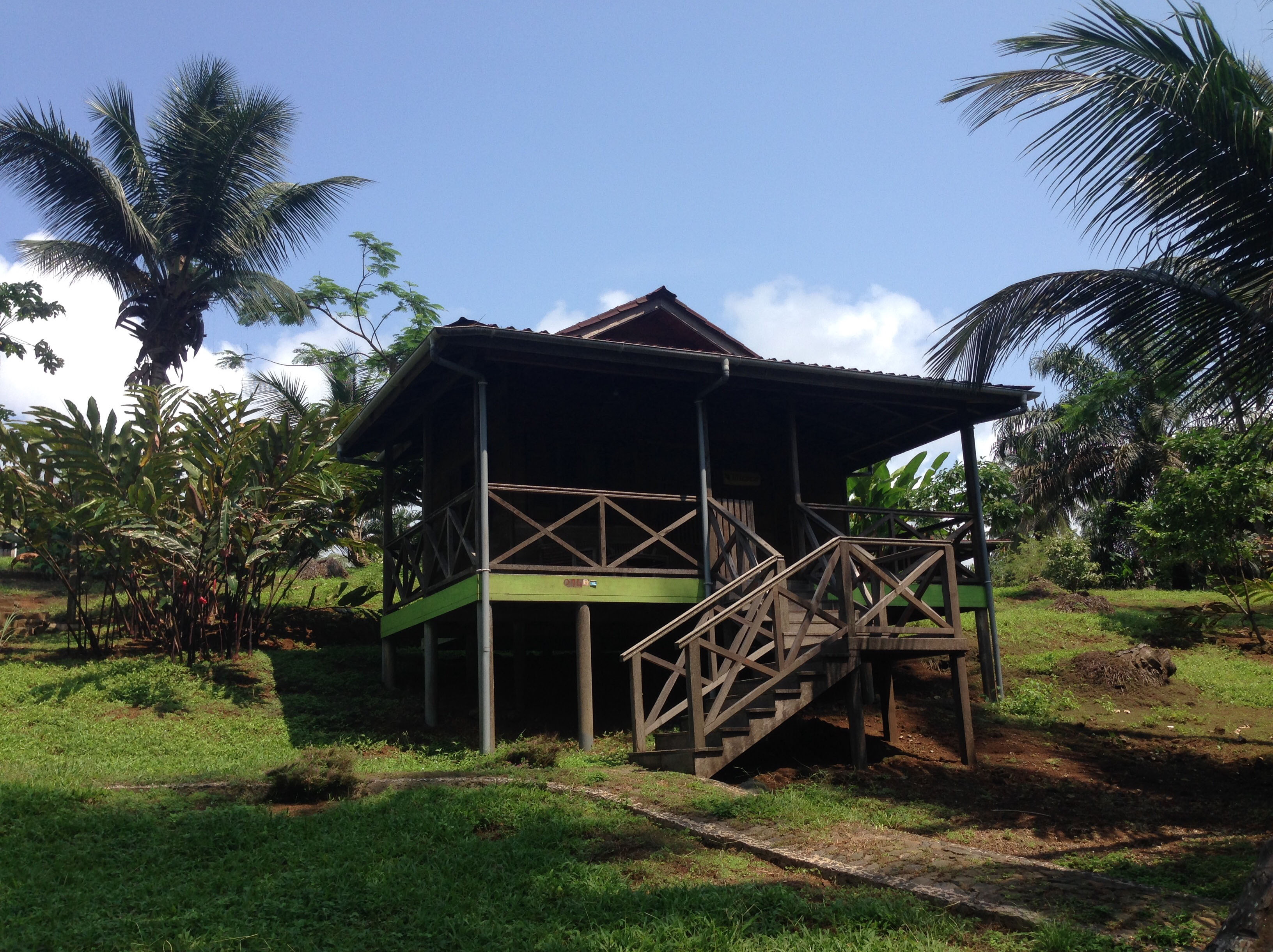 It sits in "beach paradise". There is no other way to put it. The beaches in the south of São Tomé are the most beautiful, clean and pristine beaches I have seen in my life. And this journey alone has shown me some quite impressive beaches. Apart from being picture perfect the beaches look completely untouched. Not a shard of glass or a piece of plastic to be found. And at this time of the year you are 100% sure to see turtles according to the owner Manuel Nazaré. Manuel naturally speaks Portuguese and he knows a little English. But surprisingly he speaks German as well. 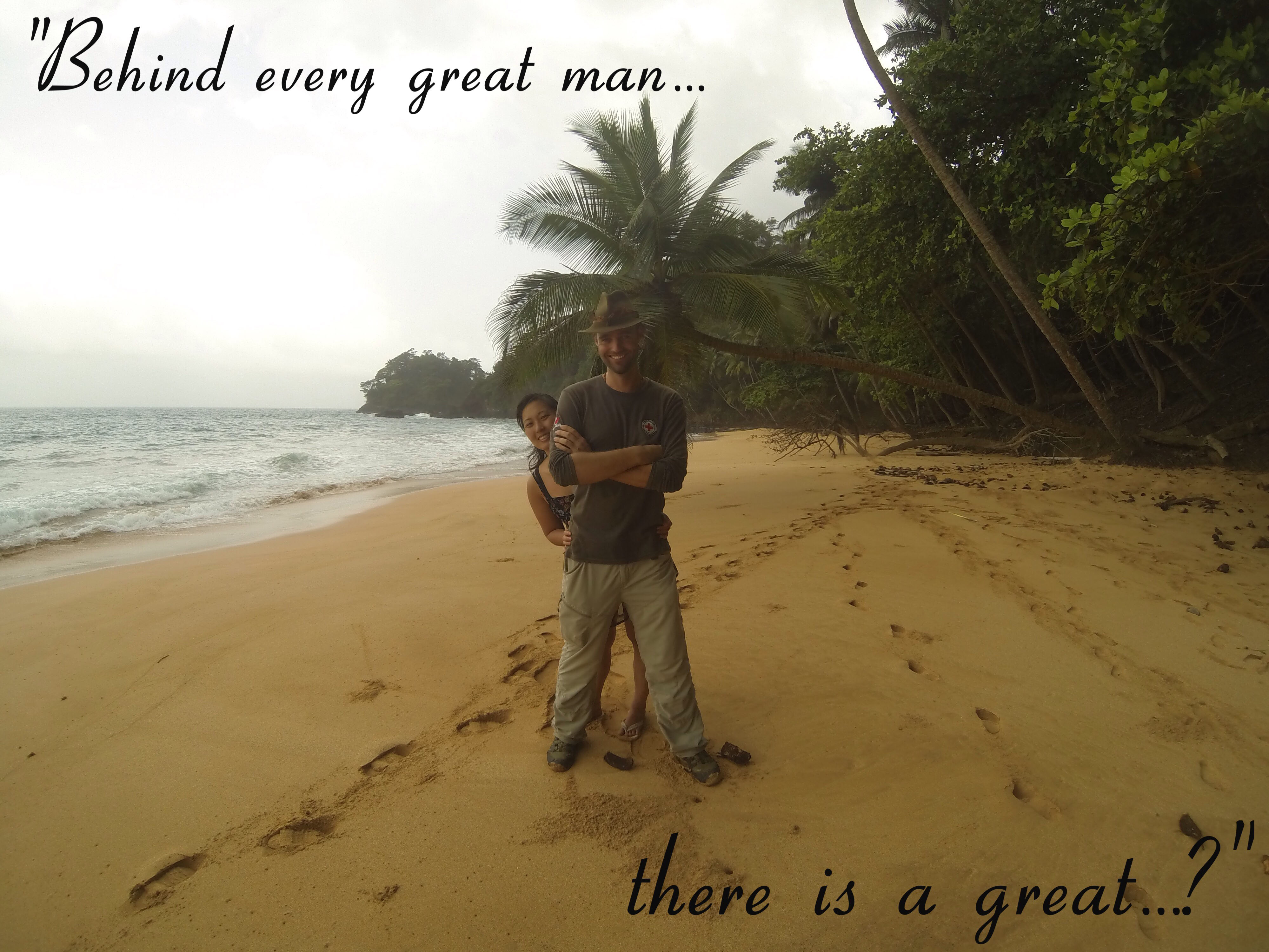 You can email Manuel Nazaré directly here for your perfect Eco Lodge vacation: This email address is being protected from spambots. You need JavaScript enabled to view it. 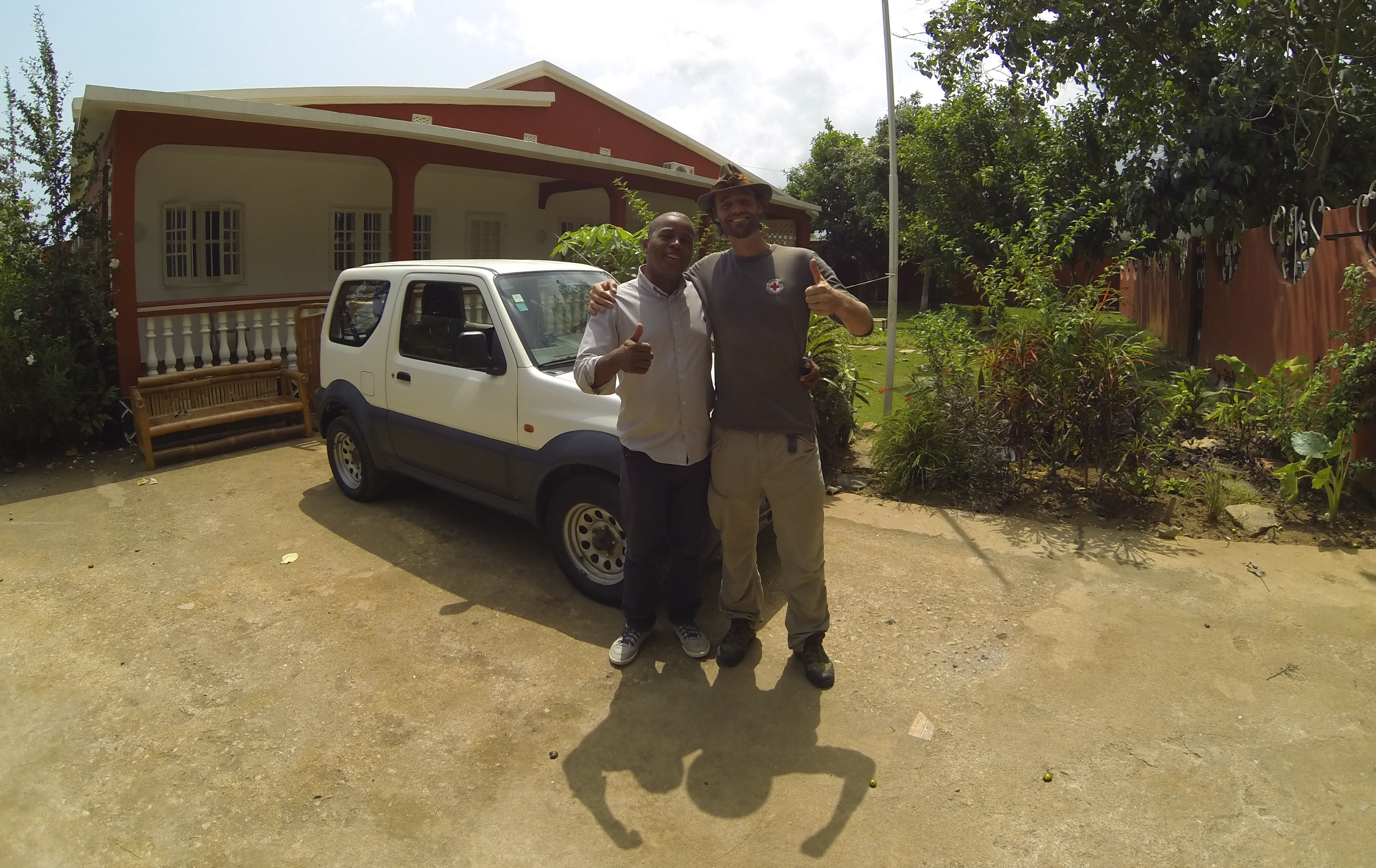 Christph also managed to convince me to stay on São Tomé by telling me that I would have a much, much higher chance of achieving the visas I need right here in São Tomé. And eventually it all started to sound pretty good. And so it was. And she arrived to São Tomé. 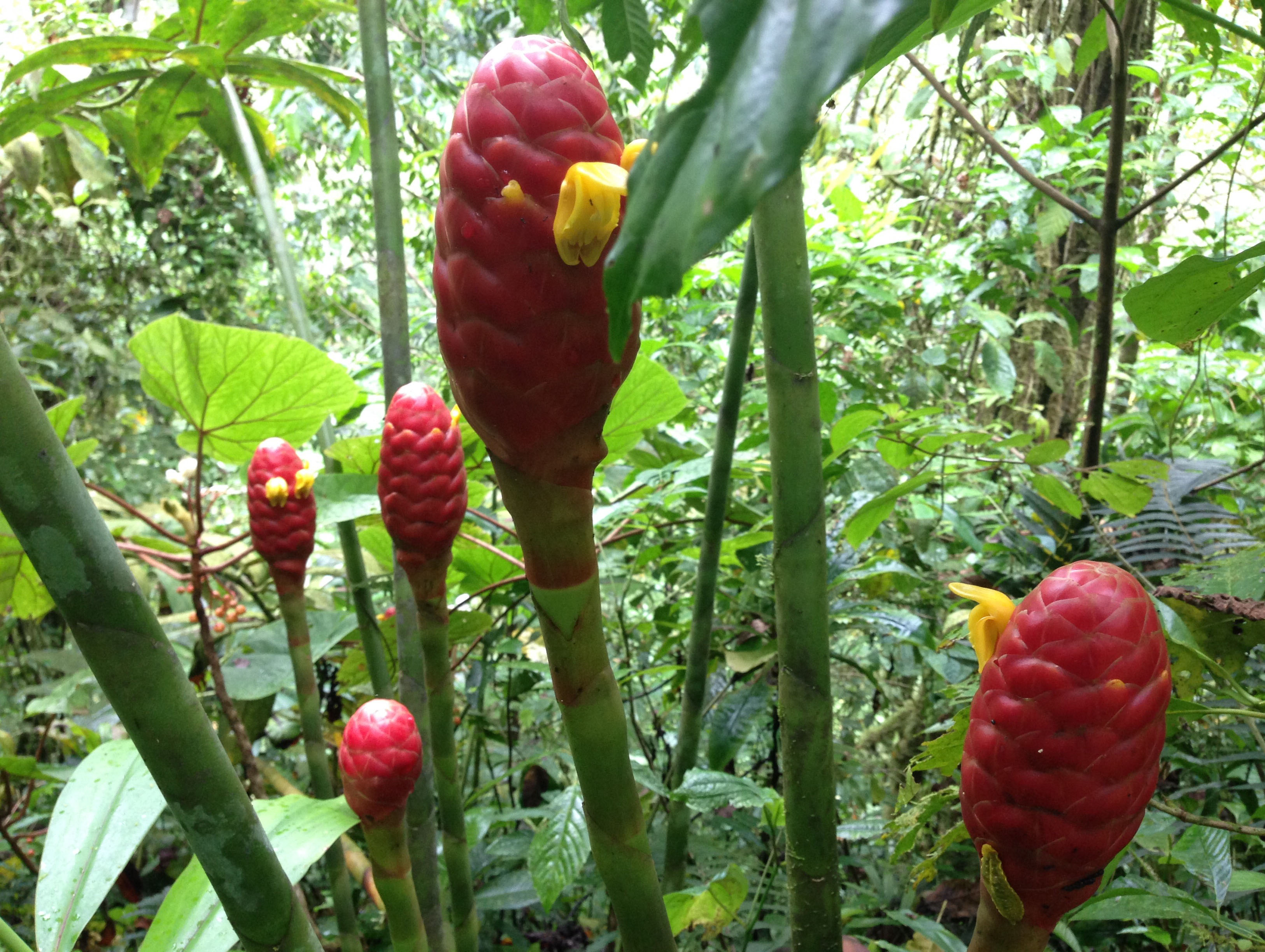 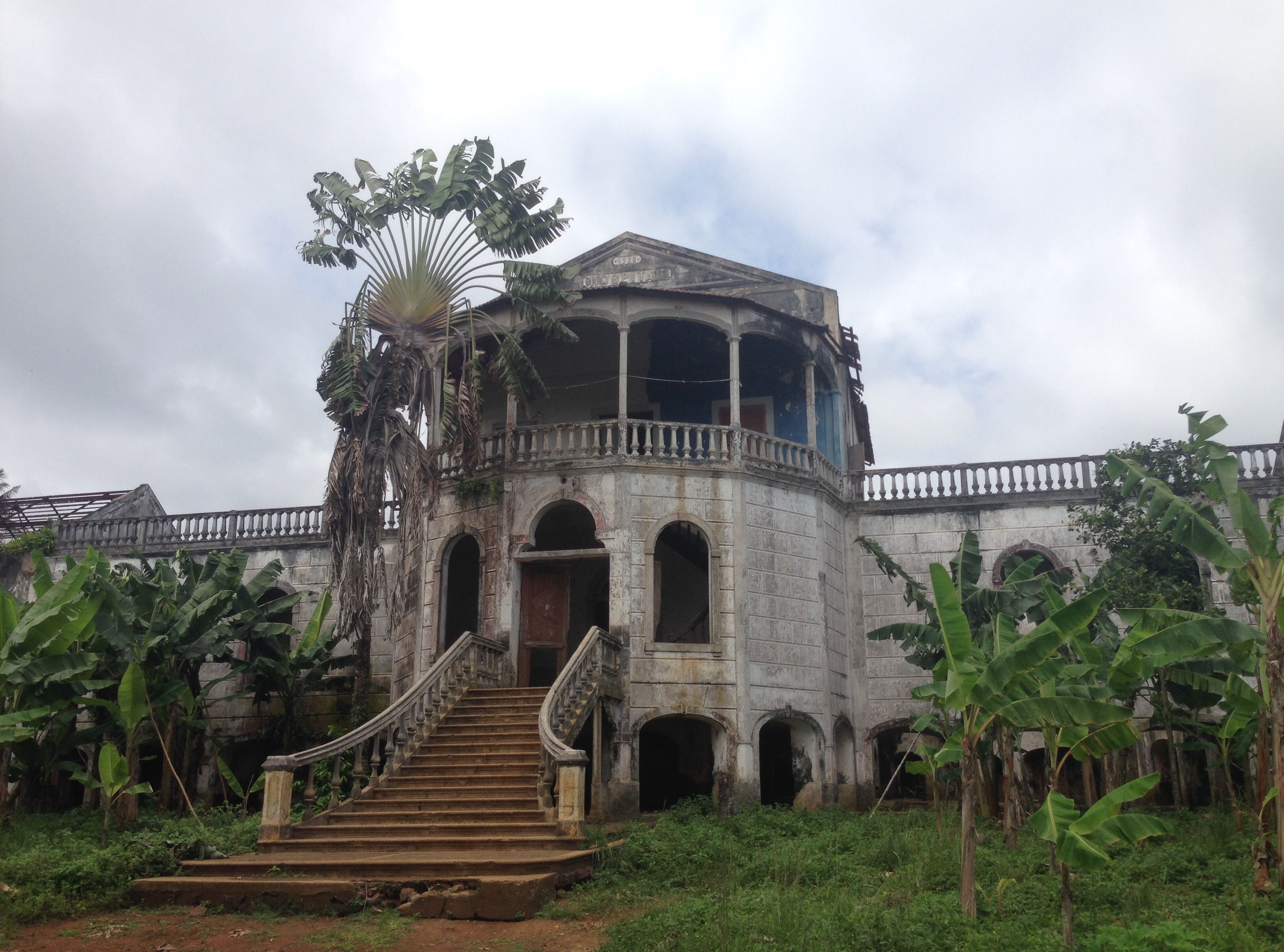 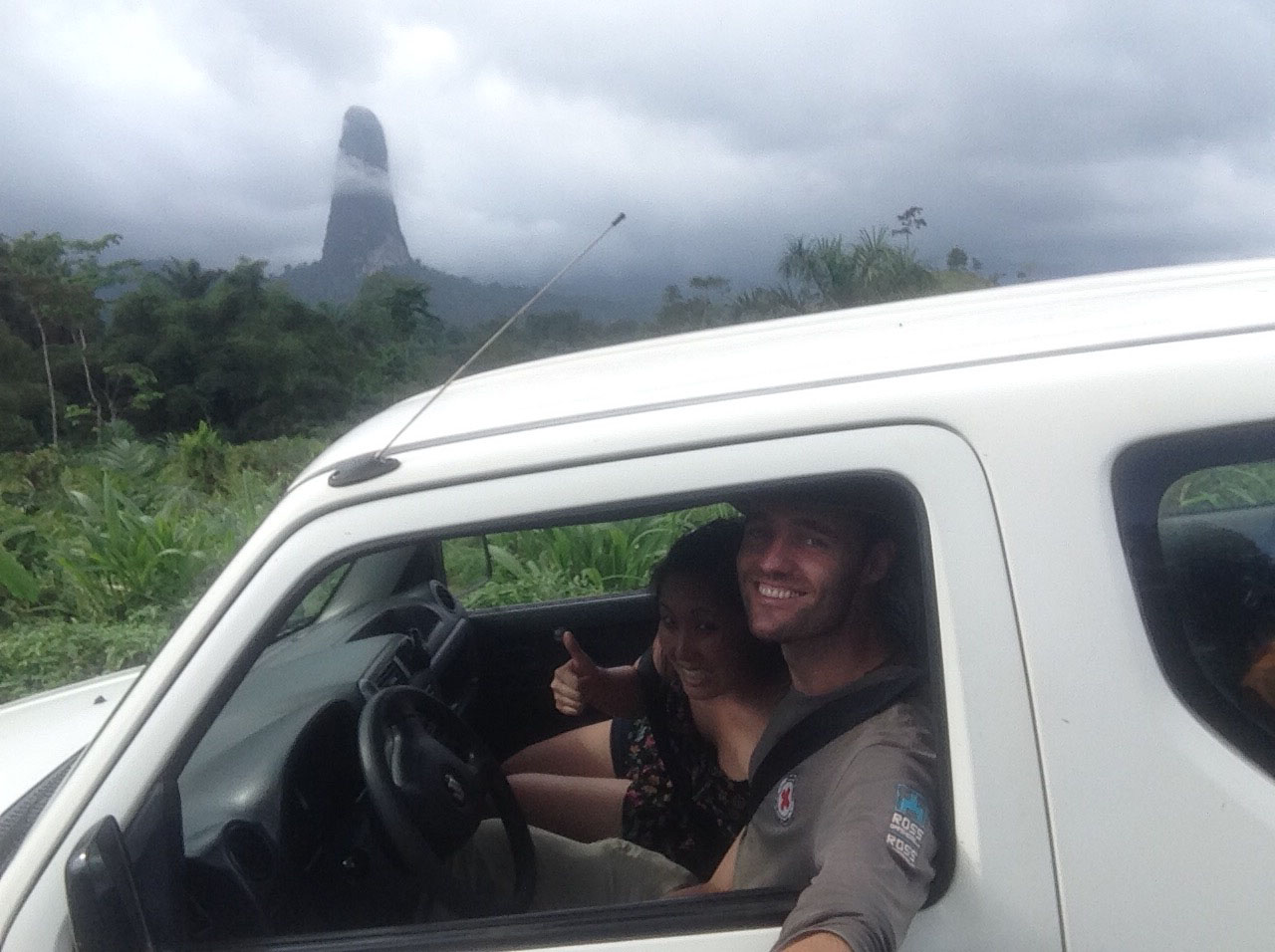 Thank you for the selfie stick, boys :)
There are just about a million different things to do on São Tomé! The island has a rich history, a rich fauna, a rich flora, a rich culture and a fascinating volcano you can climb into. There are lots of astonishing colonial buildings to be found, which are slowly being claimed back by nature. São Tomé & Príncipe started out as a communist country so you can even find old Russian military hardware between the flowers and plants. And since the country hasn't properly turned into a tourist destination yet you get it all unspoiled and mostly for yourself. 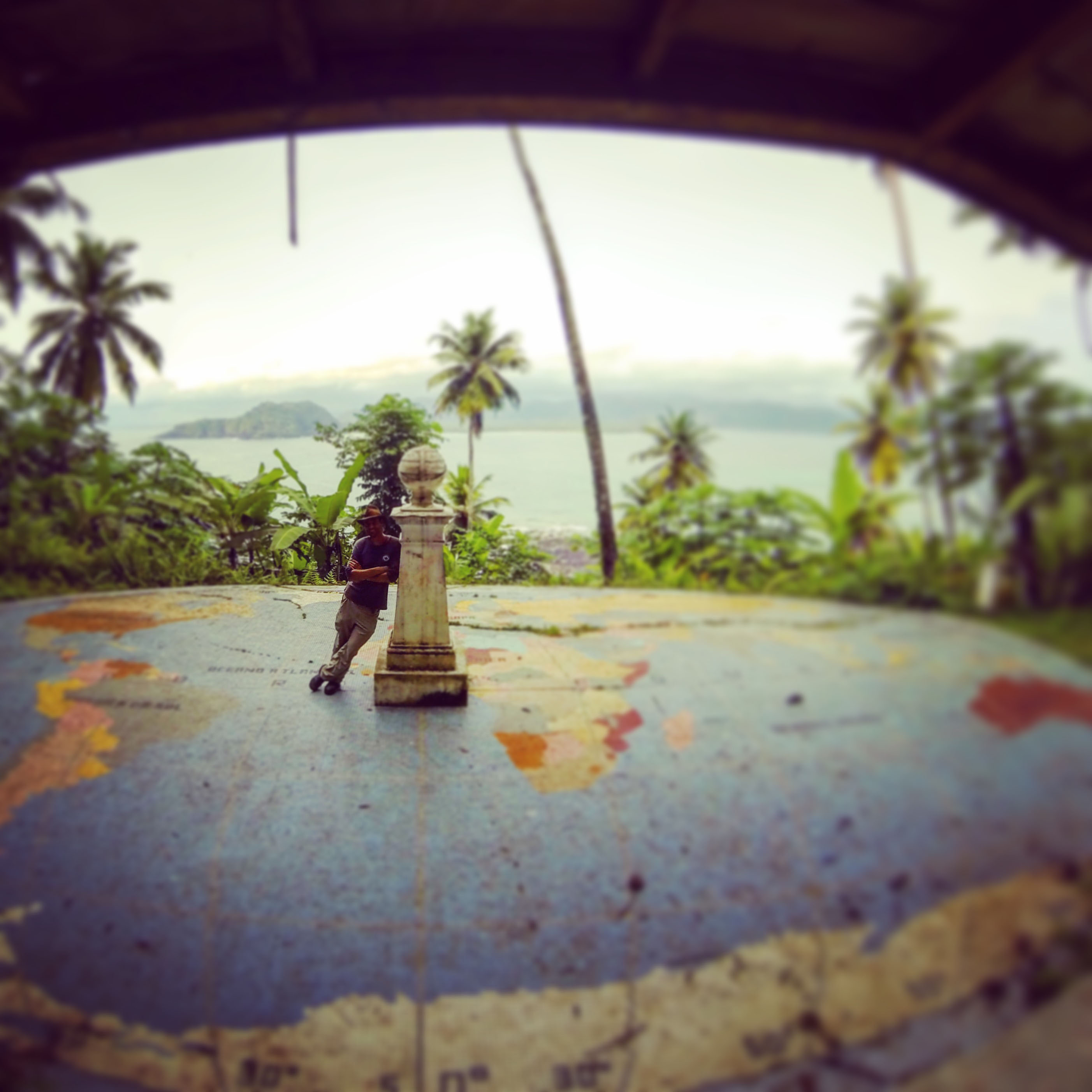 Back on the equator.
Yes, being here as a tourist is wonderful. But accomplishing something is a completely different matter! Countries do not grow up as fast as people. And São Tomé & Príncipe is only 40 years old. I guess that is equivalent to a 3 year old in human terms. People here are sweet enough and the police will not harass you. You can sleep undisturbed on the beach and walk safely in the park long past midnight. But running a business here?!? Let's just say: It's hard work!! I do not blame Christoph for being a busy man and it is no surprise that he is a master networker. There is a lot of adapt and improvise around here. And so far I do not think there has ever been a day that finished the way we planed it in the morning. 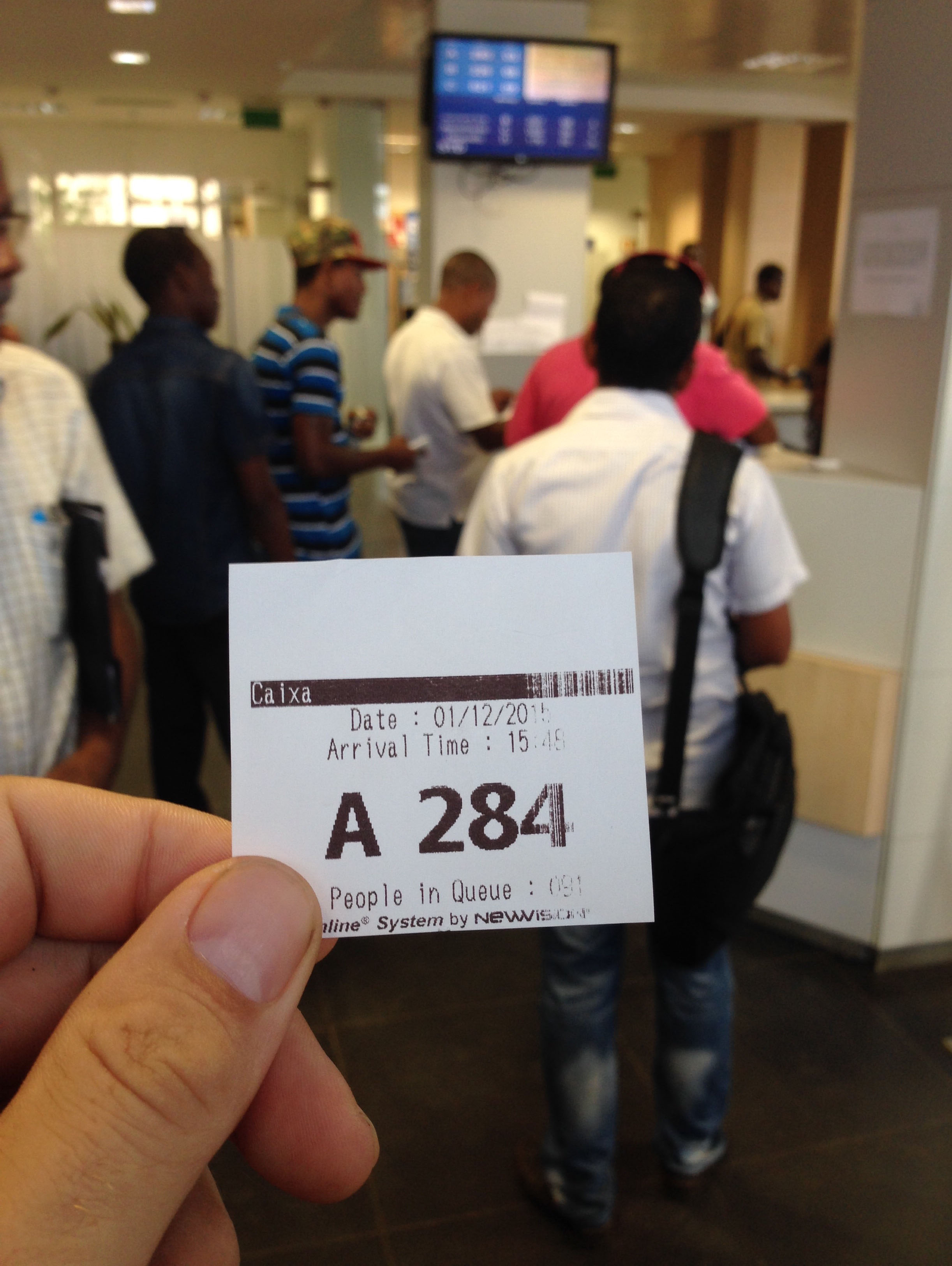 Needed cash and went to the international bank as there are no international ATM's on the island. Got number A 284 and was number 91 in line!! The time was 3:48pm. I decided to leave and come back later. Came back at 4:20pm and my number was still valid!! I was called to the desk at 4:29pm. Received my money at 4:59pm.
Right now I look at my situation and wonder if I have anything more then when I arrived? I have managed to obtain a new visa for Gabon. So that is great. My girlfriend did actually arrive and leave again and I had about 7 days of holiday with her. So that's great. However: Still no Equatorial Guinea visa. Still no Angola visa extension. Still no Cameroon visa. Still no boat to leave the island... Hmm...I guess I'm kind of still where I was when I left Gabon - however 1 country richer? 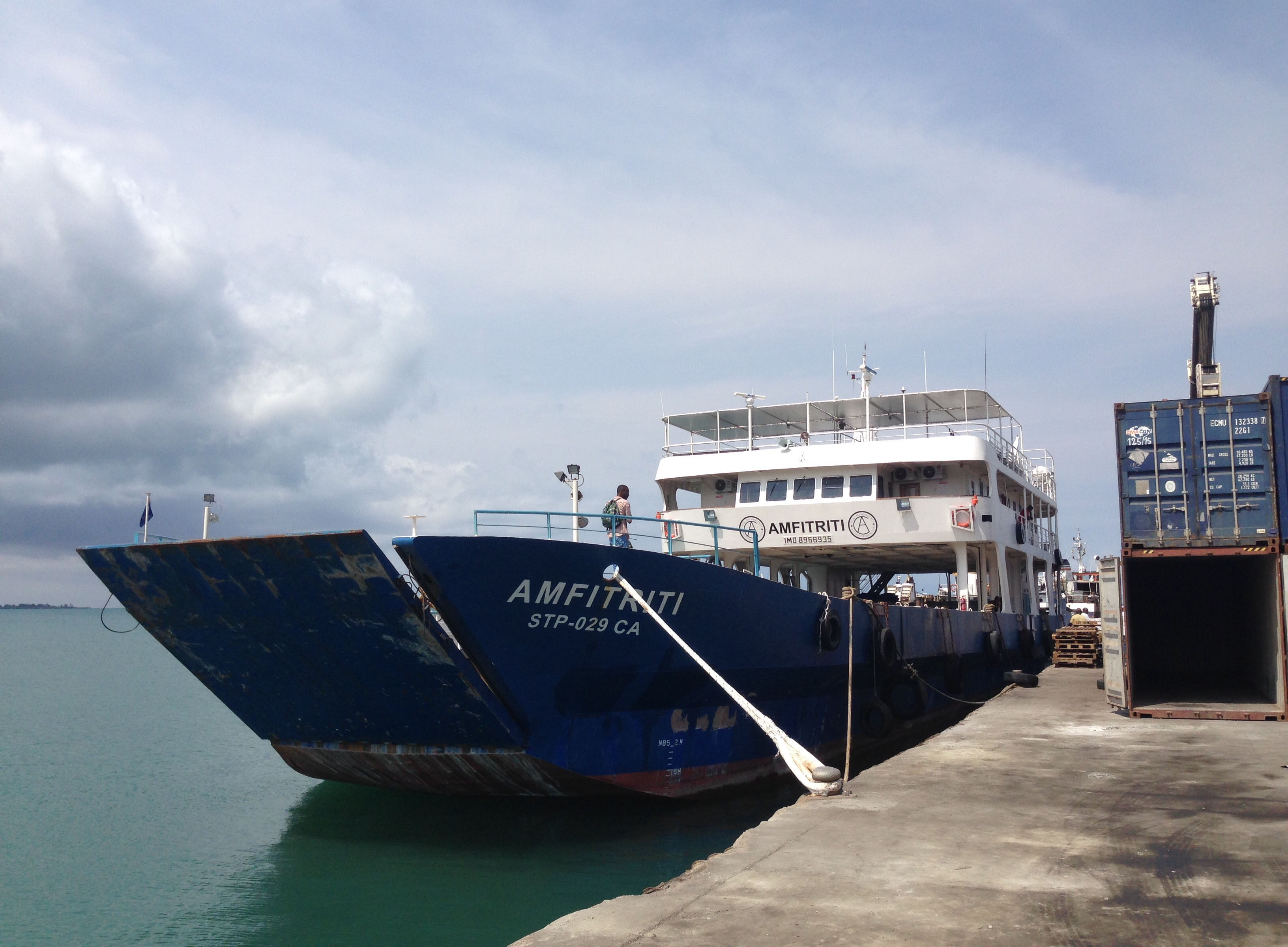 "Amfitriti"
Christoph has real good intentions. I like the guy and I think we will stay in touch for many years. But as I said it's a lot of adapt and improvise around here. So I feel that I must take the situation back into my own hands again in order to make any progress. And on this island that would be impossible for me in the short term. I really need to get away. Christoph is also good friends with Jean-Phillip, who apart from being the Belgian ambassador also owns a boat which just arrived from Greece! The "Amfitriti" (daughter of Poseidon) is soon leaving for its maiden voyage in her new life. She will connect São Tomé with the other main island (Príncipe) and with nearby Cameroon...and possibly also another country in the region. She can carry both cargo and passengers. And she may depart on Tuesday. So that's good...apart from that I do not have my Cameroon visa and the old one has long ago expired. Besides there is no embassy for Cameroon in São Tomé & Príncipe. Hmm? Christoph however introduced me to Pierre last week, who I believe is the Honorary Consul of Cameroon. Pierre investigated the matter and came back to me with a big smile and a: "Sorry, only for residents". Then he gave me my papers back. 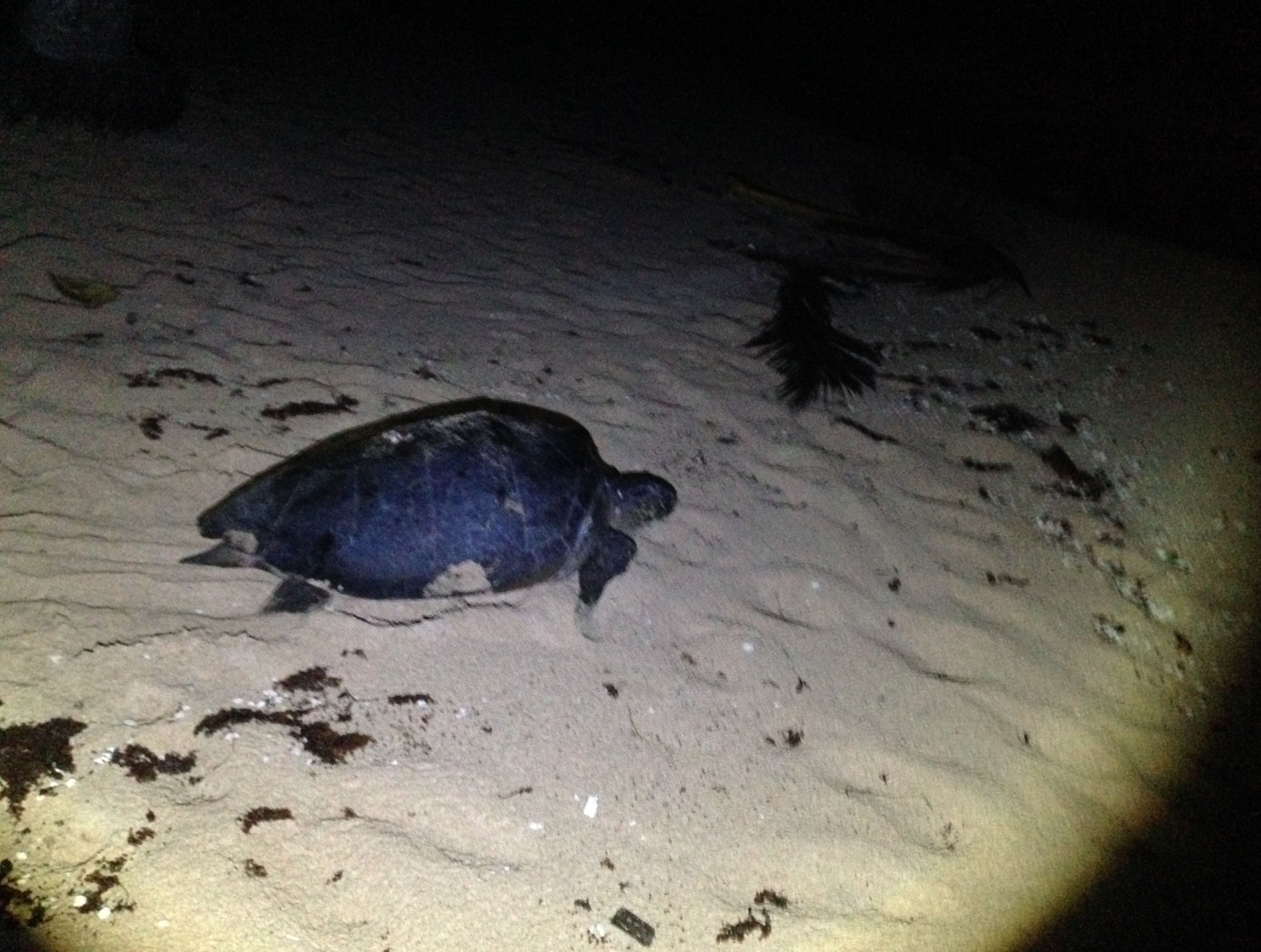 This huge girl came up on the beach, dug a hole and laid 137 eggs. Then left again. The Eco Lodge has guards patrolling the beaches until 11pm on weekdays. If a turtle is spotted they call the Eco Lodge. Great service.
Reto tells me that I've been sleeping and that I should have reacted on matters earlier. He could be right. But I did get my Gabon visa in the very beginning while I thought I would return to Gabon within the first week. Then things changed. And changed some more. And then I got busy reorganizing everything so my girlfriend could come here. And then I went to the south of the island for some well deserved rest...meanwhile I trusted Christoph and what he told me...but then Christoph got really busy and, and, and... Okay, adapt and improvise. Just let me get out of here. Christoph tells me that the current backup plan is another boat which has arrived and will soon leave for Libreville in Gabon. I wish I spoke every language in the world...including dialects. 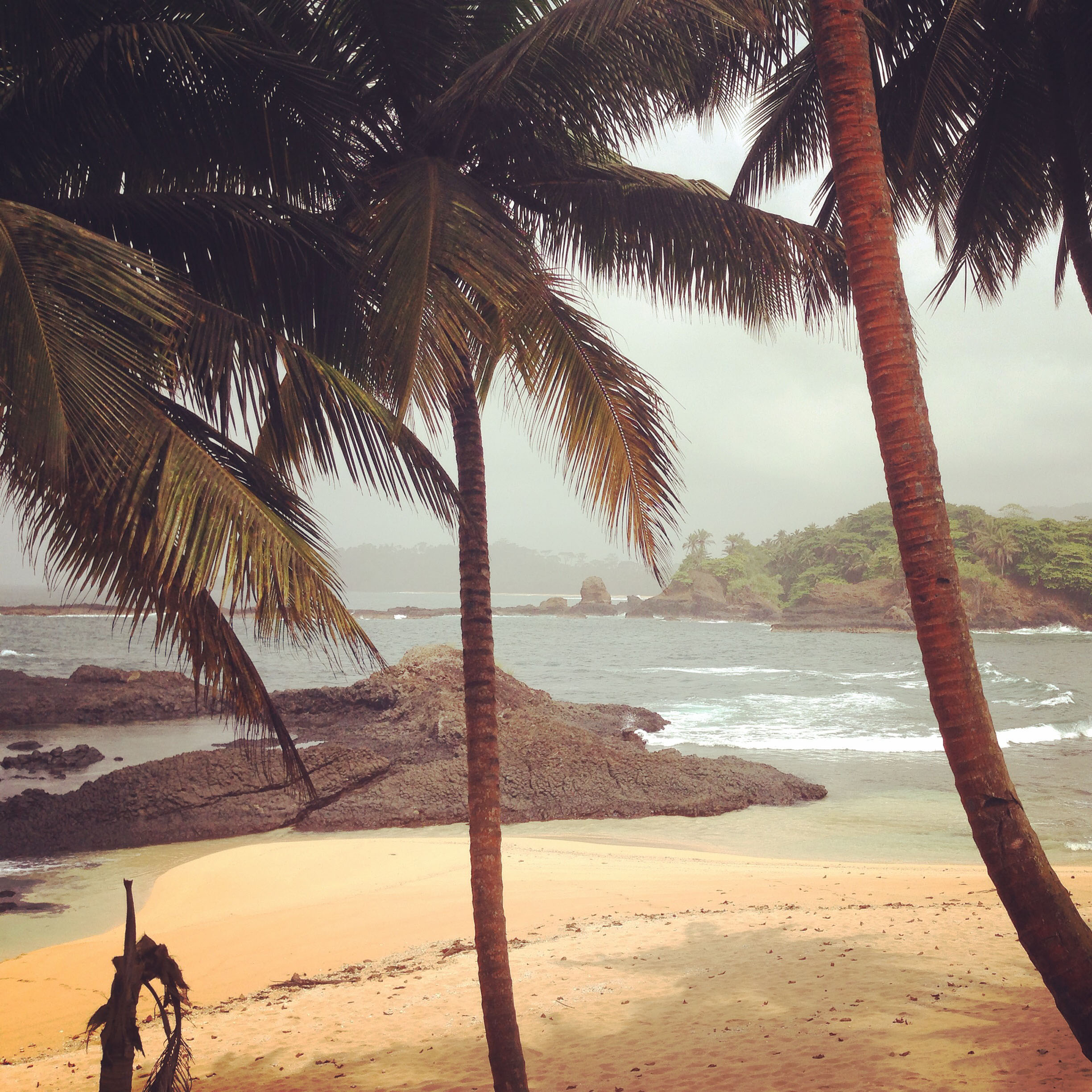 Best regards
Mr. Torbjørn C. Pedersen (Thor) - making a break for it.
"A stranger is a friend you've never met before"
Once Upon A Saga
facebook.com/pages/Once-Upon-a-Saga
instagram.com/onceuponasaga
twitter.com/onceuponasaga
youtube.com/channel/UCSy7qFQzxM9VOaMeOfYia_g
linkedin.com/profile/view?id=41191761
back to top