Let’s take it easy for a second

This entry will be short and different. I have spent a few days in Hong Kong and have some thoughts I would like to share with you. We will be in Hong Kong for a couple of weeks so there will be plenty of time to focus on the “normal stuff” next week ;)

I have recently had a quite unique experience. I was disconnected from the world for eleven days. Not many people can say they were that. Today most people check their phones constantly. When the good ship “Kota Hening” along with the brave crew and I departed Pohnpei the headlines were roaring about the potential of a third World War!! When I first read that I wondered: could we even have a new world war today? I mean…the last two world wars only involved the entire world because of colonial powers – right? There was a breakup of the British, French, Dutch, Japanese, Portuguese, Belgian and Italian colonial empires following World War II. And in 1991 the Soviet Union was dissolved. Back in WWI (1914-18) and WWII (1939-45) colonial powers could involve overseas territories in conflicts which the territories had no interest in participating in. Would it even be possible to involve the entire planet in a conflict today? Regardless my point is actually a different one. Because we left Pohnpei on January 17th and I set foot in Hong Kong on January 28th and connected to the internet again. This time I was wondering what the state of the world might have been and where the recent conflict between Iran and the USA had taken us. To my surprise this subject was dead!! Now the headlines were reading the Novel Coronavirus!!! The threat of a pandemic which could infect millions or even billions and have a devastating effect on humanity!! The most recent deadly pandemic was a hundred years ago and they should appear once every fifty years so we are overdue!! This is it!! Ruuuuuuuuuun!!! 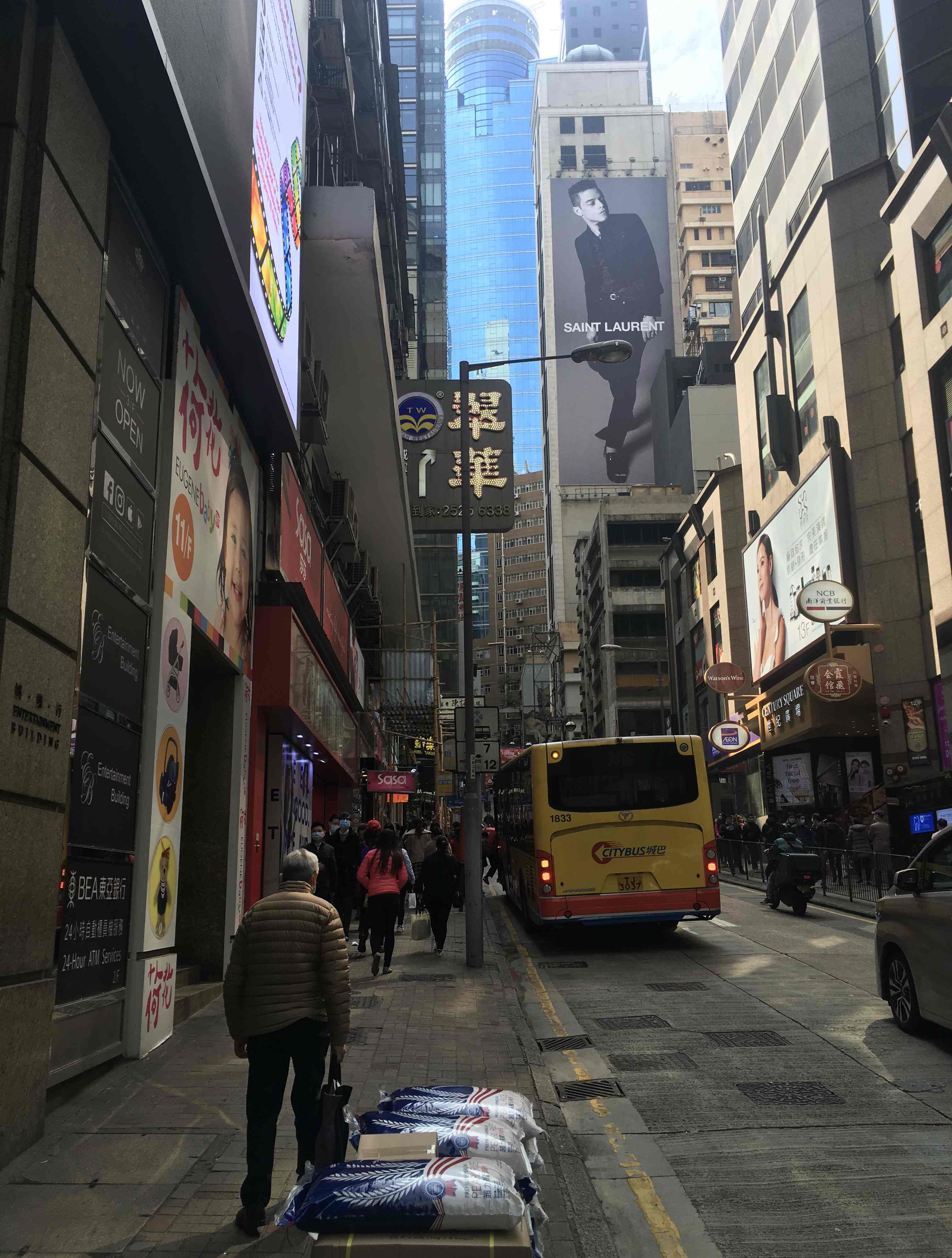 Give me a break! Media is out of control. There are plenty of good media outlets out there who report fairly and balanced. However it seems to me that they are being drowned out by media hysteria and click bait. As such I personally went straight from the potential of WWIII to a deadly pandemic in less than two weeks. Ridiculous! 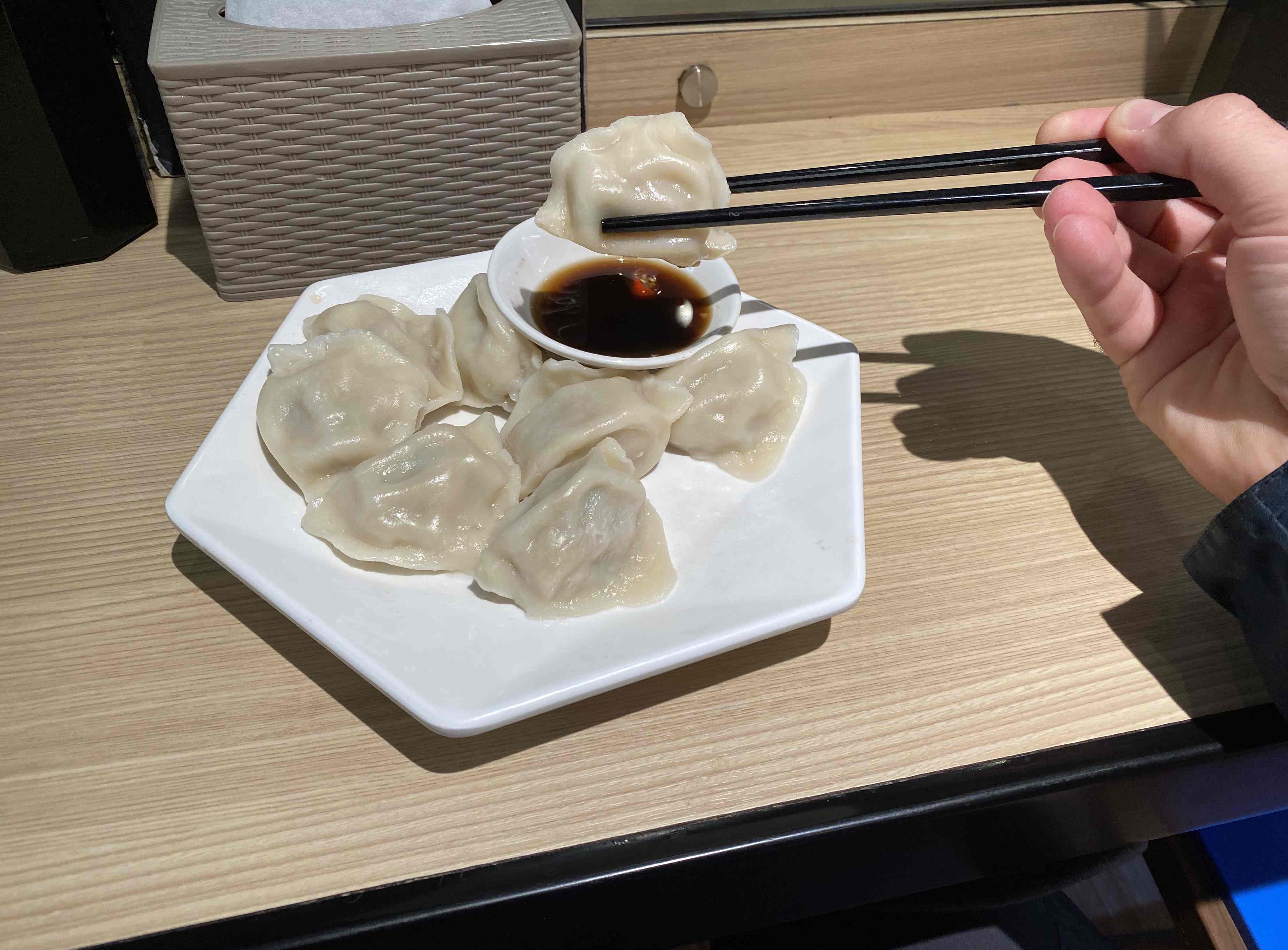 However let’s look at what is really going on for a second. The confrontation between Iran and the USA is not something to be taken lightly. In my opinion there was never a threat of WWIII however there was a real threat of regional mass destruction, loss of lives and a new humanitarian disaster. As soon as I heard that the US had attacked and killed Iran’s General Qasem Soleimani on Iraqi soil I reached out to three of my Iranian friends from three different parts of Iran to hear their opinion. They generally all felt uneasy about the potential risk of prolonged retaliation but also all independently found that the world was a better place without the late General Soleimani. Iran is an immensely cultivated nation and unlike most others. They are not Arab but Persian which tells the story of an entirely deferent history of poets, authors, kings and ancient empires. Iran is a large, advanced and resource strong nation with some of the kindest people who walk the earth. However they are no match for the US military. No country is. I could write a very long blog about US/Iranian relations and their joint history since 1953. But that is not what this entry is about. I would much rather just have you understand that the interests of people living within a country and the interests of those who run it are often not the same. And for some countries the gap seems incredibly wide. I believe the Iranian government knows it has everything to lose in an all-out war with the USA and is unlikely to be backed by Russia and China if it should come to it. So politically and practically the confrontation had to be diffused. And it seems it was. 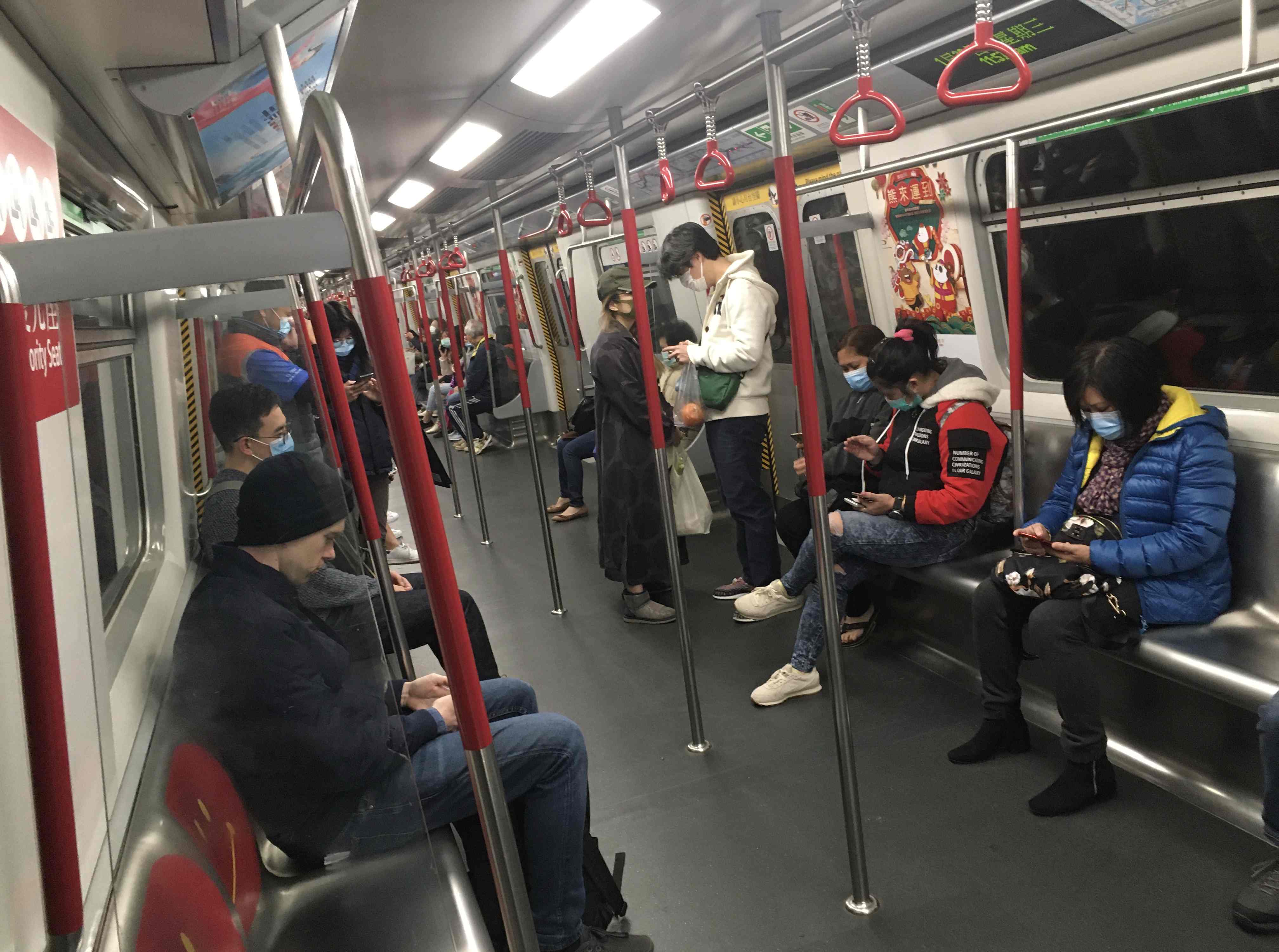 Cononavirus!! Is there widespread panic in Hong Kong?!?! Take a deep breath. You have probably had a coronavirus at some point of your life. Coronaviruses are a large family of viruses that cause illnesses ranging from a common cold, to more severe diseases like SARS. The novel (new) coronavirus (nCoV) is a strain that hasn’t previously been identified in humans. You would protect yourself in the same way as you would from someone who has a cold: wash your hands, eat and drink well, get sufficient sleep etc. You could wear a mask but if you are healthy then I personally do not see why you would do that? In much of Asia it is a courtesy to wear a mask when you are sick so that you so not transfer bacteria or virus to others. So while there are currently plenty of pictures of people wearing masks then you may want to consider that many would have been wearing them anyway. It is also common for people in Asia to wear masks to protect themselves from air pollution. 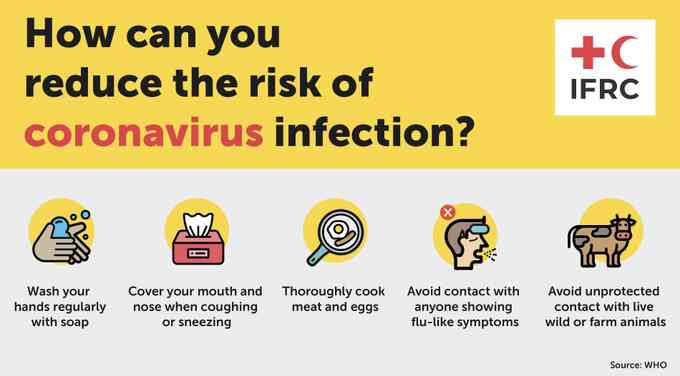 A new virus which is killing people is not a joke. Experts are studying it carefully to learn as much as possible. However this doesn’t appear to be a cause for widespread fear. It is important to know that most people have not caught the virus and of the few who have more than 97% will get well without any complications. The respiratory illness caused by this novel coronavirus was first identified in Wuhan, Hubei Province, China in January 2020. The outbreak began in early December 2019 and continued to grow. Within a few weeks the new coronavirus had resulted in thousands of confirmed cases in China – a country with 1.4 BILLION people! So to put that in perspective, if a thousand people were infected, then that would only be 0.0000007% of the population. Some say that the mortality rate of the virus is 3%. However the mortality rate of the virus is probably an over-estimate, as it counts all deaths, while many mild cases of the disease go un-reported. Those who have been following the Saga for years will remember when we travelled through Guinea and Sierra Leone in West Africa during the Ebola epidemic. Ebola at one time had a 40-70% mortality rate. We also travelled through Angola in the midst of the 2016 yellow fever outbreak. The fatality rate for that was 8.7%. And guess what – I’m fine! :) 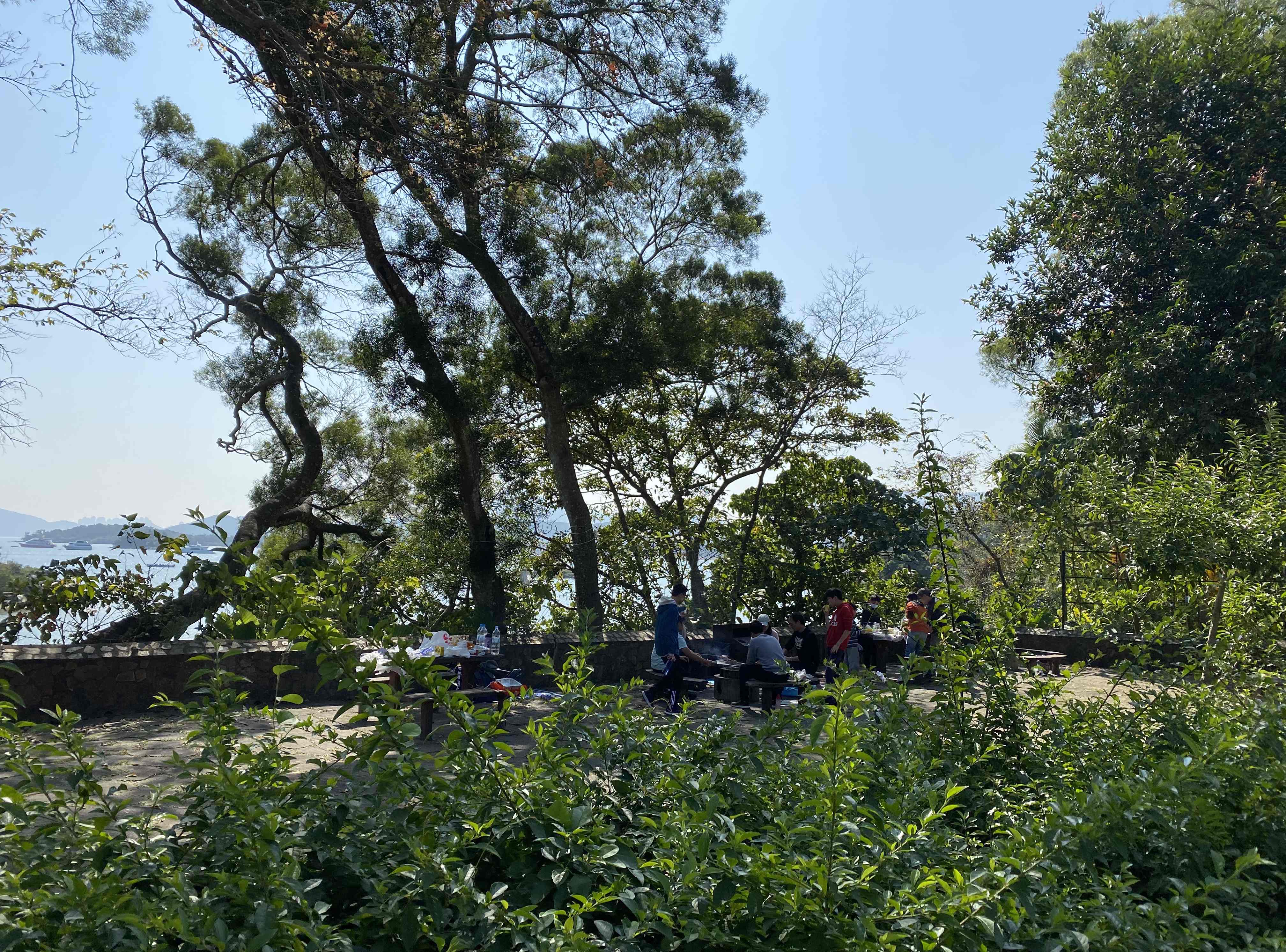 Hong Kong looks pretty normal to me. It is really cold compared to the tropical conditions we just left. And it is also a little strange going from small island societies to a major city! I have observed people taking selfies and eating pizza. I have been riding buses and metros. Disney Land and Ocean World both closed due to the virus the day before I arrived. The organisers of the Hong Kong Marathon also decided to cancel the event this year. Hong Kong remembers the SARS outbreak in 2002 which totalled 1,755 cases in Hong Kong of which 299 resulted in death. That is a fatality of 17%. Hong Kong is however home to more than 7 million beating hearts. That is 7,000,000 vs 299 in comparison. Not really relevant but I’ll mention it anyway: roughly 250 babies are born every minute across this planet. In conclusion: I’m not saying we should ignore the virus outbreak. Caution is certainly required when dealing with something unknown. Panic is not :) 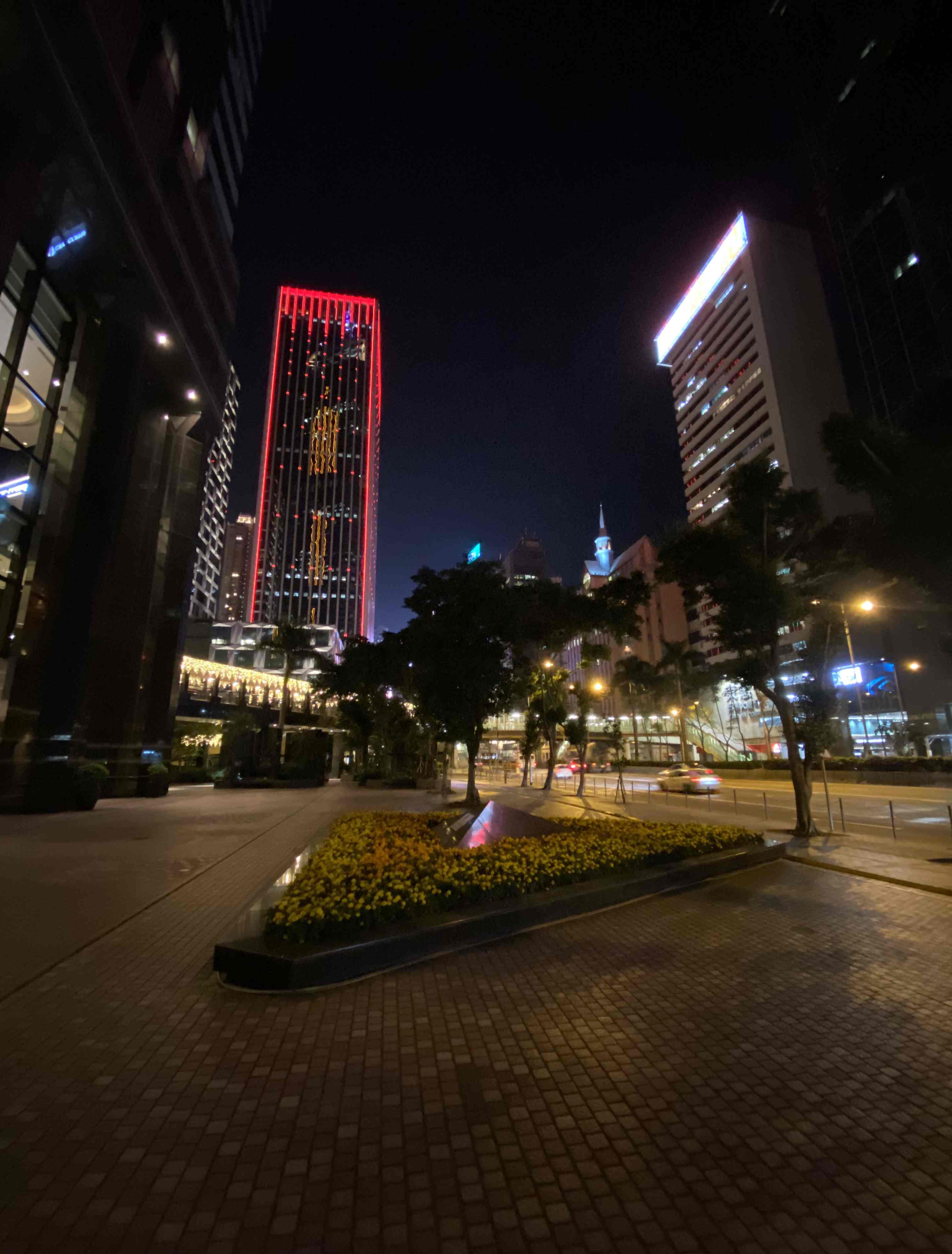 I have done some shopping in Hong Kong. The Saga needed a new phone as the old one was severely crippled. If you want to help pay for it then you are more than welcome to make a donation further down on the page. The phone is a tool within the Saga to keep the social media alive and communicate with you ;) As I was shopping I found that life in the city appeared quite normal. Children are playing in the parks and in spite of what I think is cold weather I have seen lots of families enjoying picnics. The government is however taking precautions and has announced that anyone who can work from home should do so. I was scheduled to speak at two Maersk offices here in Hong Kong but they have both been cancelled or at least postponed. I’m still scheduled to speak for a few people at the Danish Seaman’s Church on February 4th. The event has been arranged by the Danish Chamber of Commerce (DCC). It’s day by day people. My next ship has been delayed by a week due to the Chinese New Year so I’m here until February 12th. A wonderful family is hosting me but more about them next week. 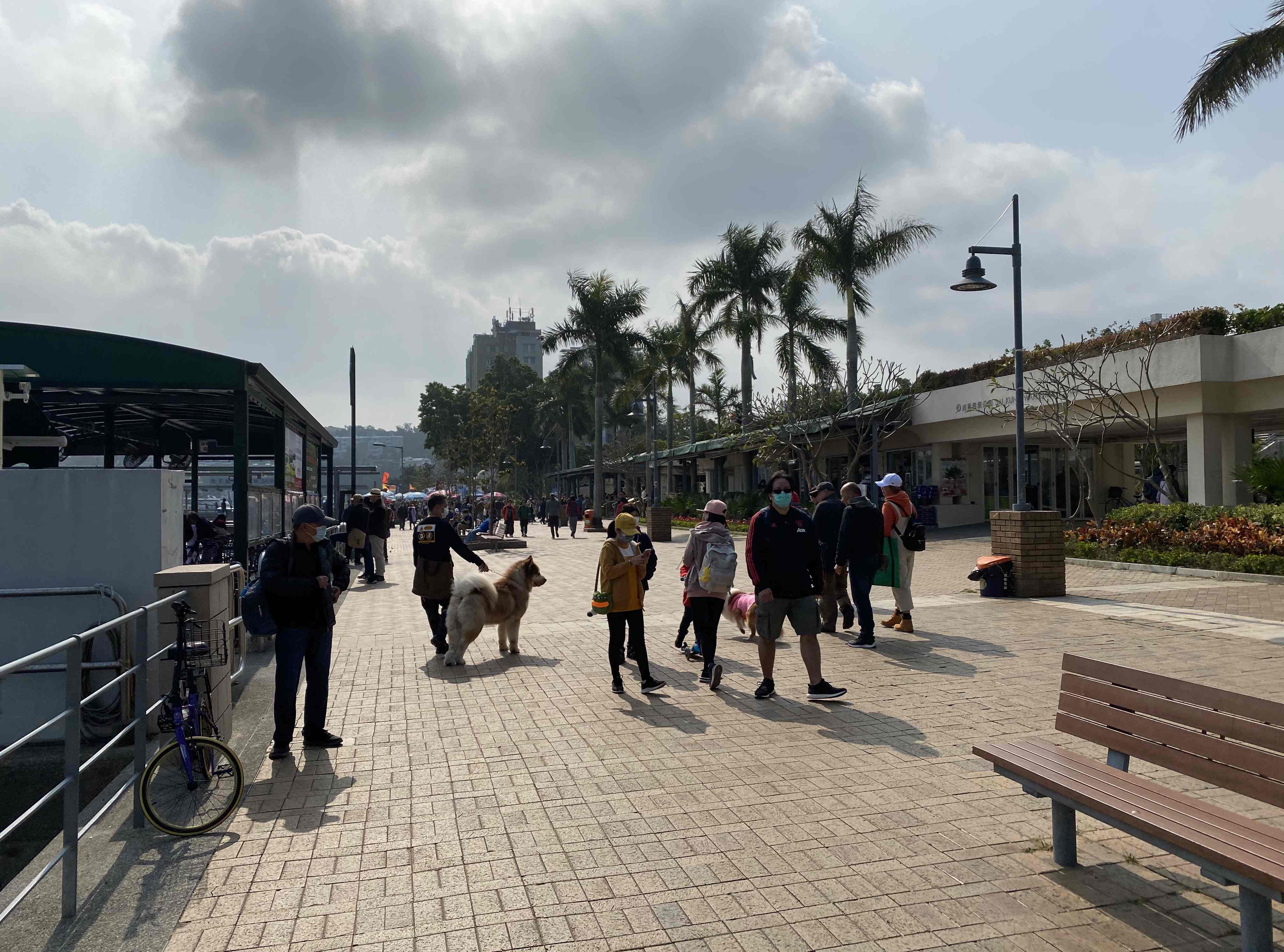 Let’s finish with this and have you smiling. Kim is a teacher at “Skolen på Islands brygge” which is a public school in Copenhagen, Denmark. Kim, who originated from the same islands as me (Fyn), has been following the Saga and reached out to hear if I would do a skype call with the students for their feature week on the subject: countries. Sure thing!! What I didn’t know was that I’d be speaking with 150 students in 6 classrooms from 3rd, 4th and 5th V & X!!! What had I gotten myself into?!? 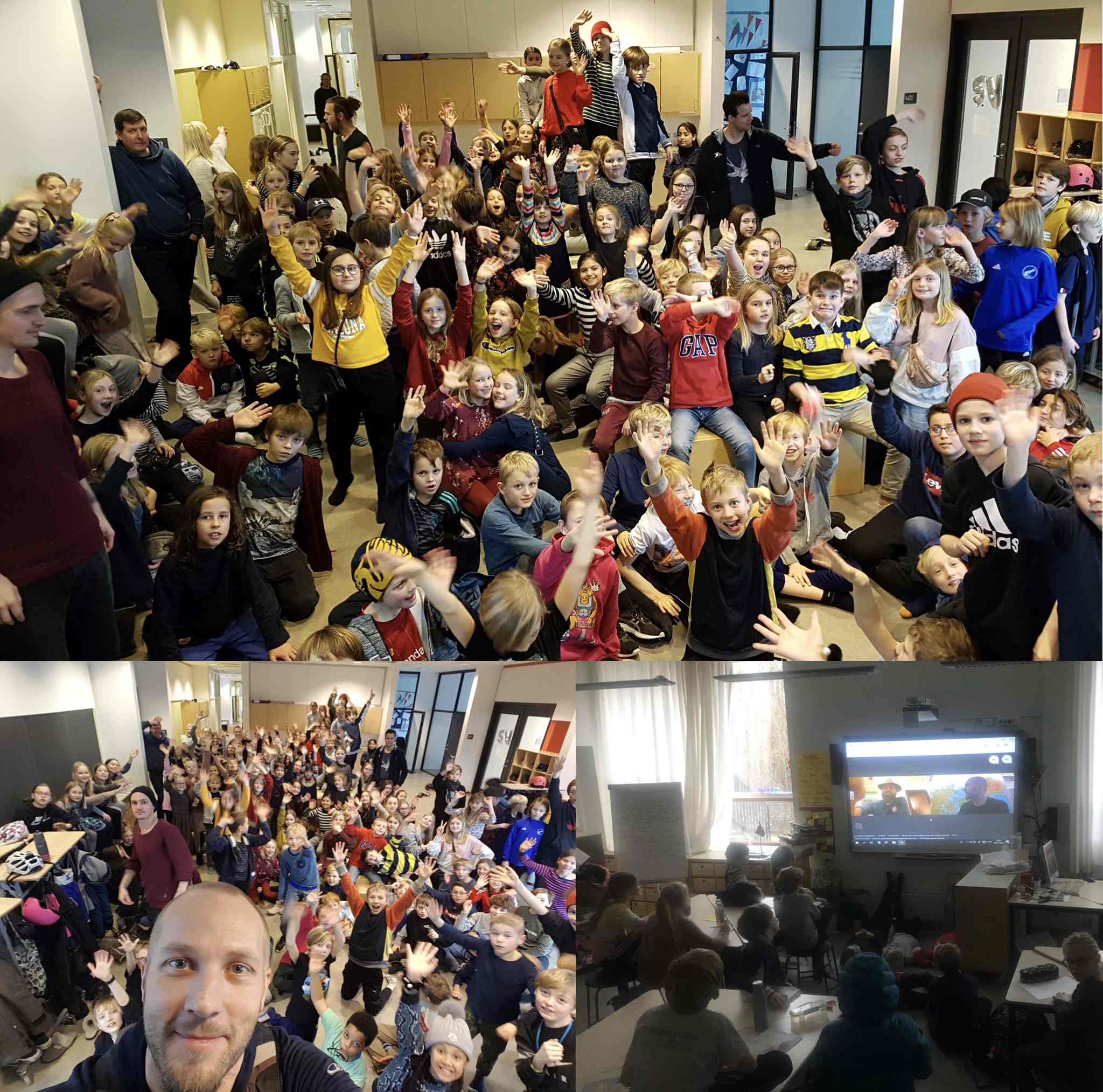 For forty minutes there was a flood of great questions and we had a brilliant time together. It’s funny how the best questions always seem to come from younger minds? One of them was: “is the journey more about experiences or setting a record”? Brilliant!! A huge THANK YOU to Kim and everyone at Skolen på Islands brygge!!