Tai Kwun is a special part of Hong Kong

An oasis among highrises

Tai Kwun (aka Tai Kwun – the Centre of Heritage and Arts) is a special part of Hong Kong. It is both new and old all at the same time and if you haven’t been to Hong Kong in recent years then you have missed it.

If you have never been to Hong Kong but plan to visit someday then make sure to add Tai Kwun to your list of things to see and explore. The complex containing 16 heritage buildings was opened to the public in 2018 after a decade of careful conservation and revitalization. So what is it? Well in short it’s a place that offers a breathing room and a break from an otherwise busy city environment. There are two large courtyards with sun chairs available to the public, there is free Wi-Fi and the charming historical buildings ensure a calm atmosphere. And it is free of charge! 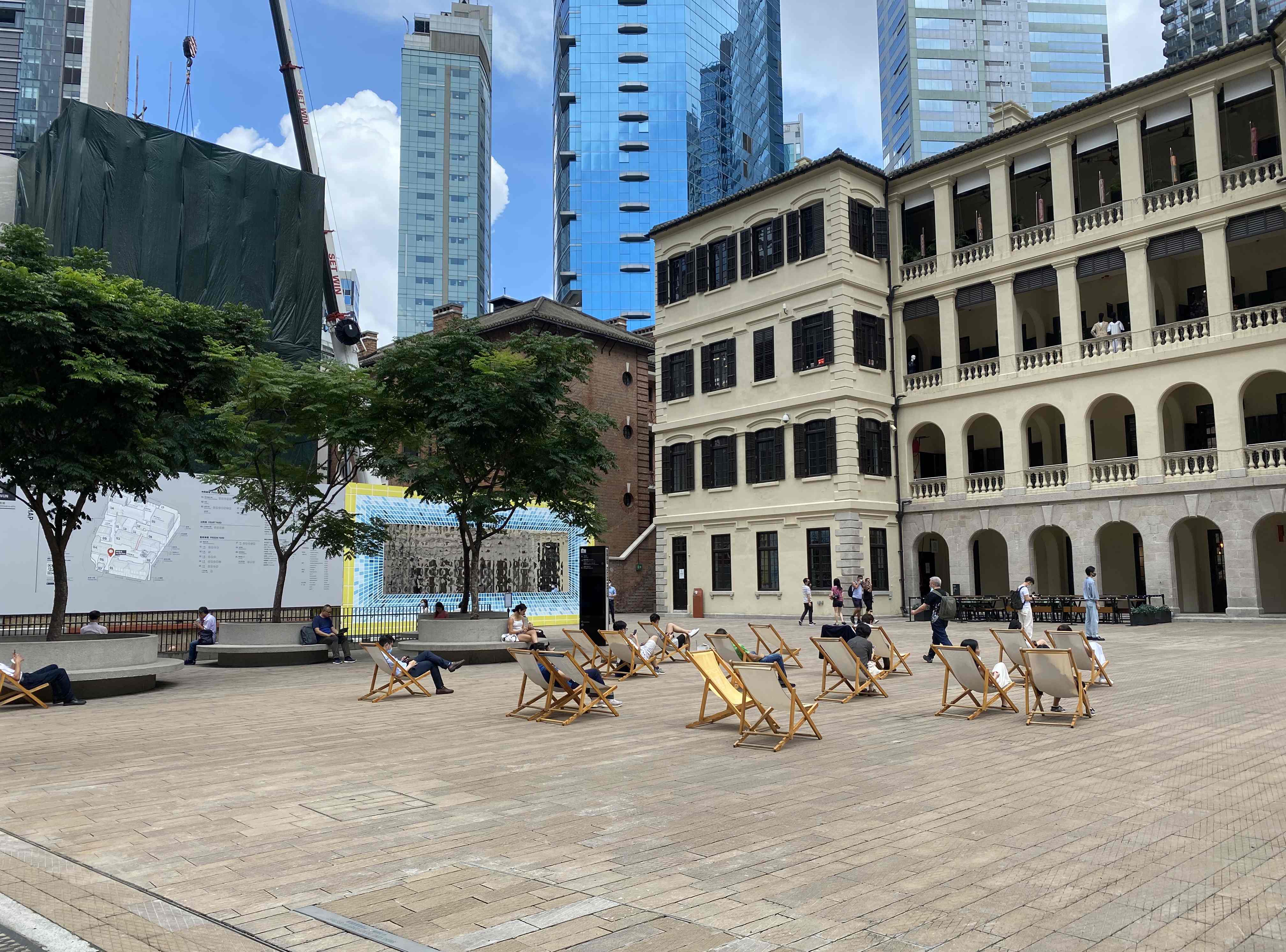 Tai Kwun is a lot of things. The name loosely translates into “big station” and that is exactly what it once was. The first building was constructed in 1841 and would later grow into a “one-stop-shop” compound with the former Central Police Station, the Central Magistracy and Victoria Prison. So you literally had the police that would arrest you, the courtroom which would judge you and the prison which would contain you all in one location. In 2018 TIME Magazine listed Tai Kwun in its "World's Greatest Places 2018" list and I fully back that. Tai Kwun is not to be missed out on. Especially because it has grown to become so much more than a historical landmark. 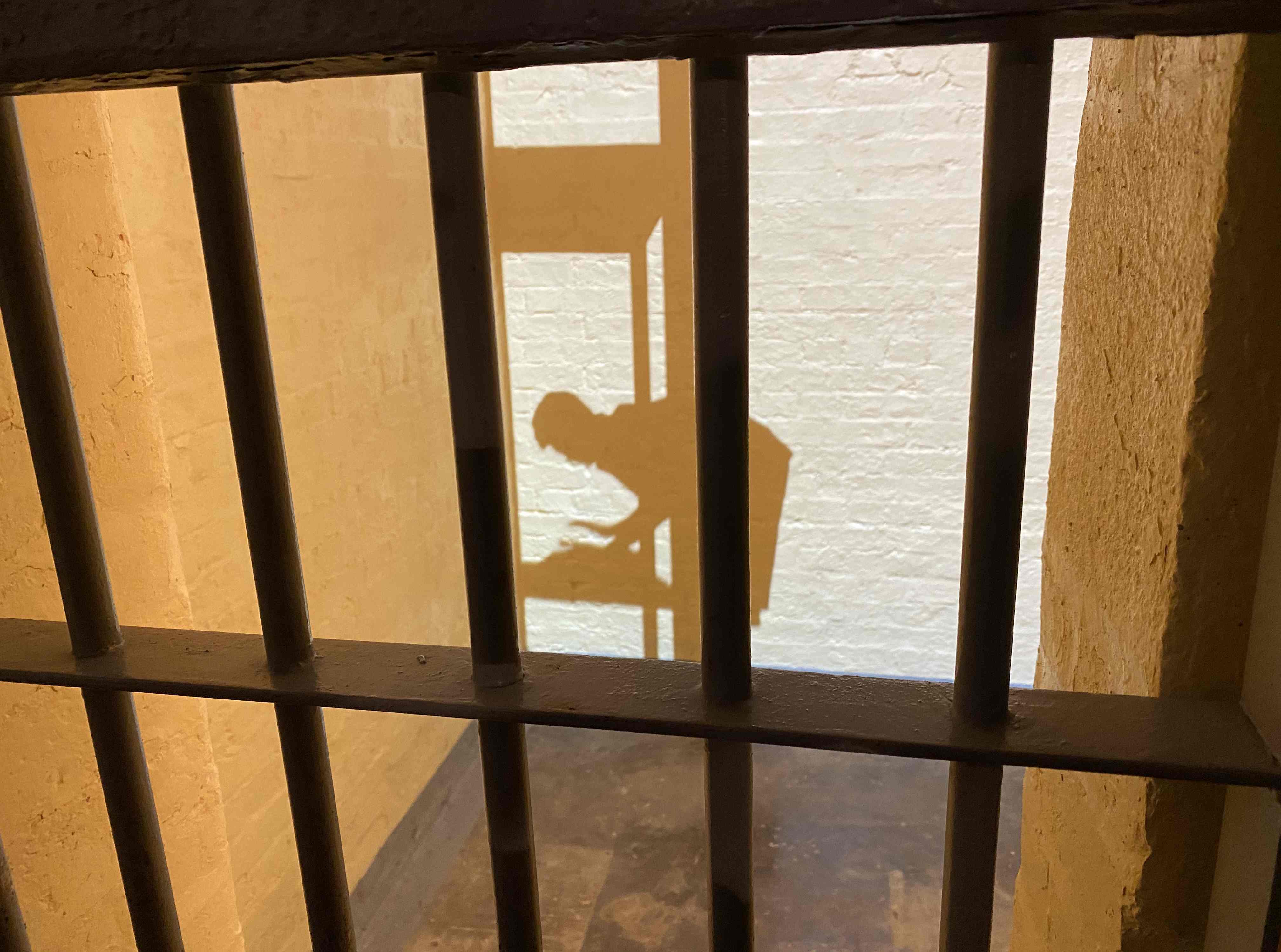 Visiting the former prison is a really interesting experience!

The two huge courtyards have been re-imagined as spaces for art and performance. There is always something going on and something is always changing. Stages go up, decorated lanterns suddenly add color to the grey spaces between the old prison blocks, music fills the air, movie screenings, performances…it’s hard to keep up but the Tai Kwun Seasonal Guide helps. 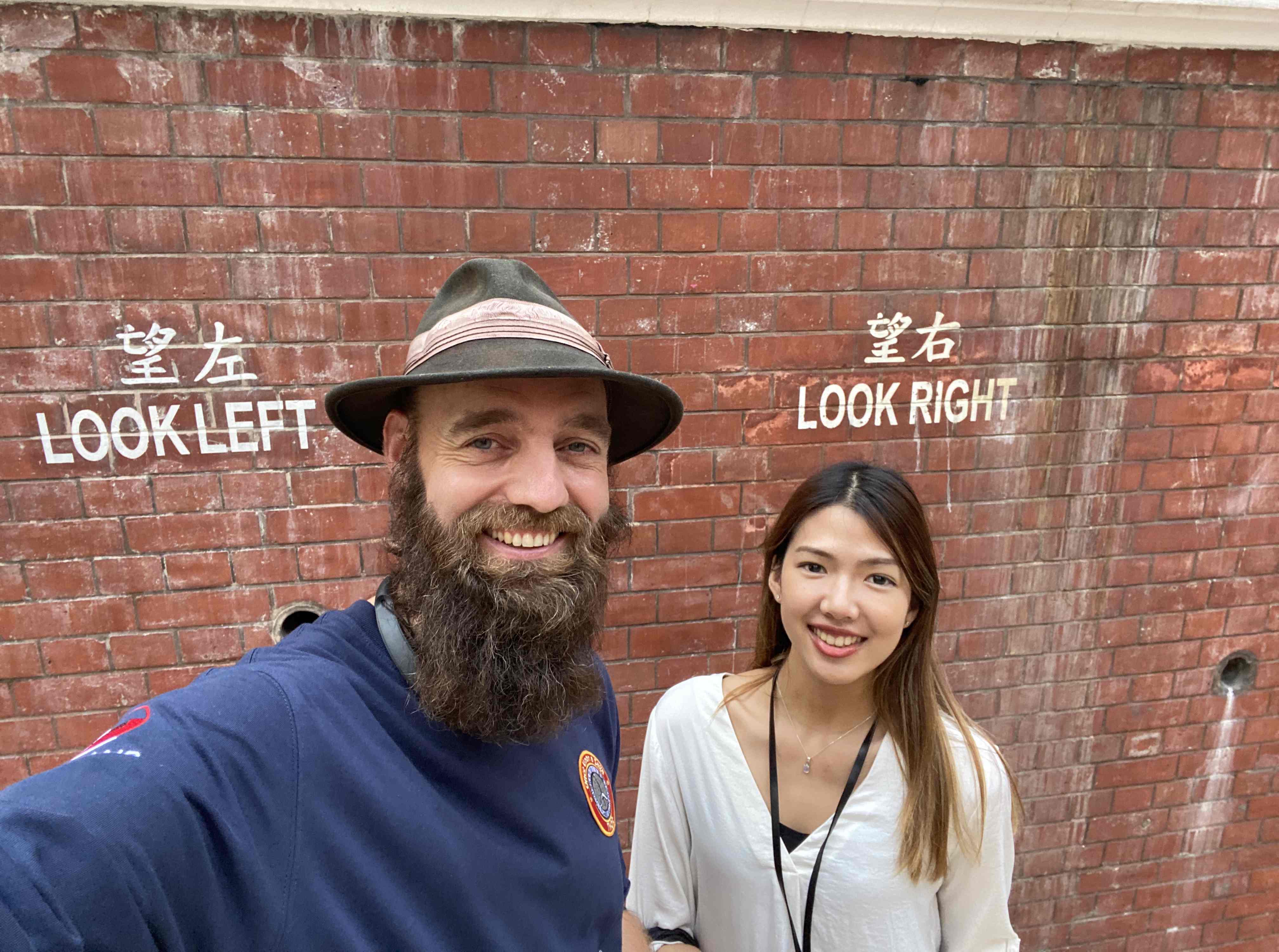 Kaitlyn knows ALL the "Instagramable" places at Tai Kwun ;)

I had the pleasure of visiting Tai Kwun under slightly more formal circumstances as Kaitlyn, from the Tai Kwun Team, had invited me for a day of culture, art, history and good food. It was far from the first time I paid Tai Kwun a visit. A friend of mine pointed me towards the buildings in early February and said that while much of it would be closed due to COVID-19 it would still be interesting for me to walk between and around the buildings – so I did exactly that. I returned again in March to do a podcast in the Prison Yard with Brett from the Running Klub. And then I was back on April 6th to film twenty-two push-ups in an interesting location for the April challenge. A few days ago I was back once more to meet with Kaitlyn who greeted me with a big smile (under her mask). Kaitlyn has been working at Tai Kwun for nearly a year and opened my eyes as she guided me through contemporary art and advanced cuisine. 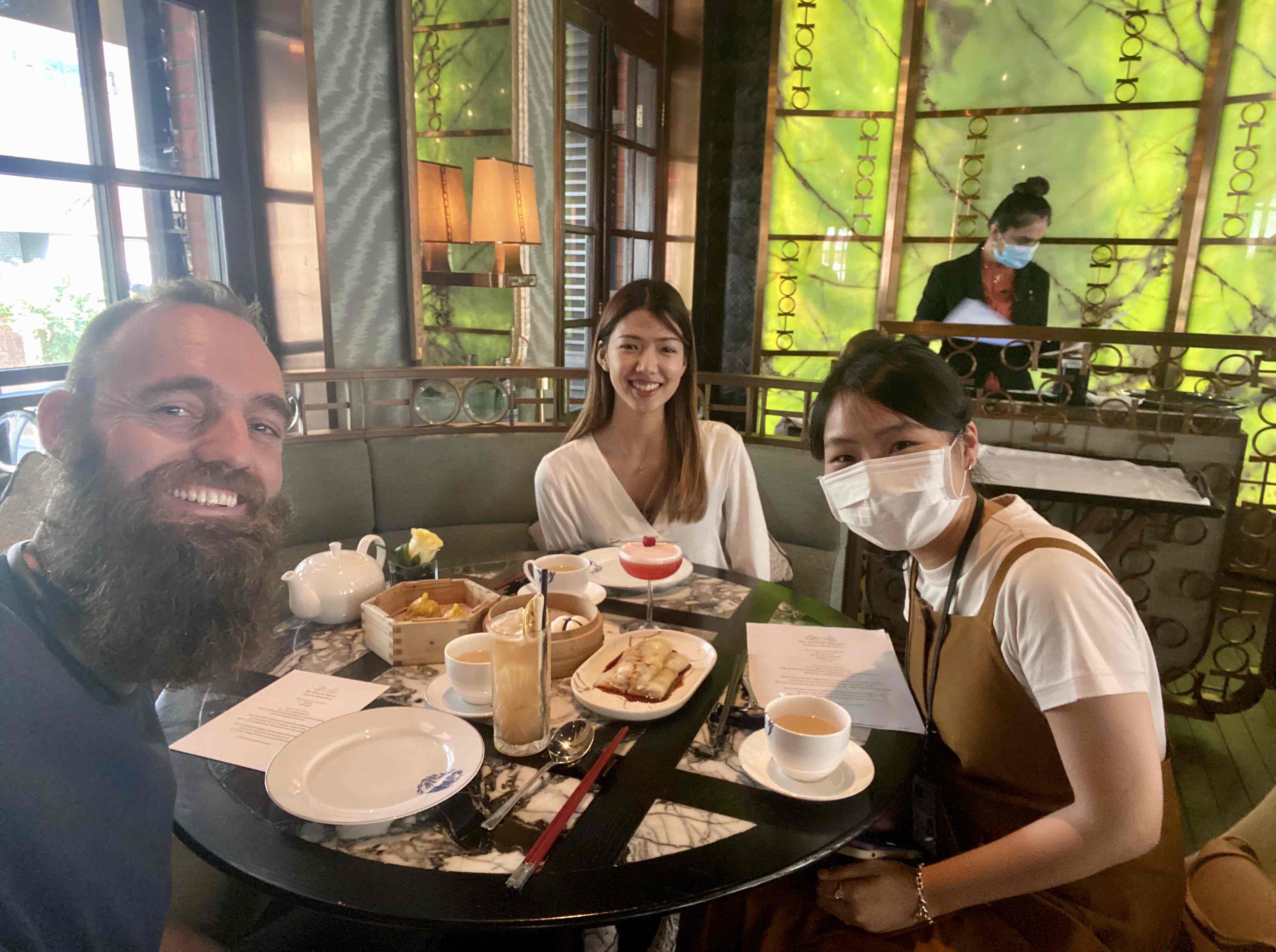 Dining at 'The Chinese Library'' with Kaitlyn and Ching. 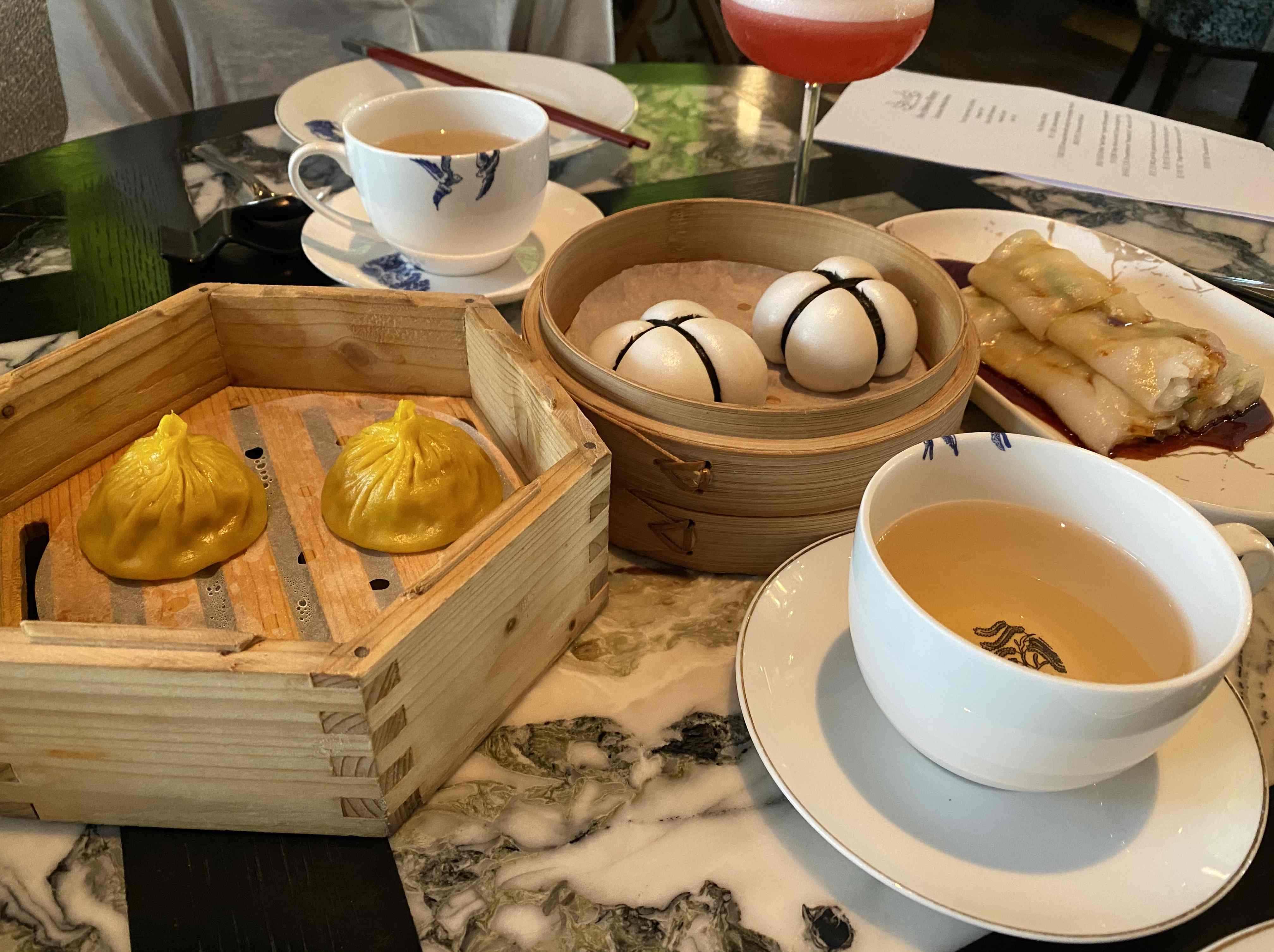 Kaitlyn and I were joined by Ching for lunch at ‘The Chinese Library'. Together the two Tai Kwun Teammates and I sat in awe over some of the creations which came out of the kitchen! The Chinese Library sits on the first floor of the and the stylish décor had me and my childish mind fly off to the restaurant from the opening scene of Indiana Jones and the Temple of Doom. If you don’t remember or haven’t seen the movie, then that’s a scene which takes place in 1935s Shanghai, in which the gangster Lao Che met with Indiana Jones to trade Nurhachi's ashes for a large diamond. However Lao attempted to double cross Indy with poison, but Indy escaped, taking Willie Scott (a dancer and singer) with him as they escaped through a window. Moments later they unite with “Short Round” and escape in a cream-colored 1934 Duesenberg Auburn convertible. Yeah – that was a bit of a side track but The Chinese Library reminded me of that (only somewhat classier). The food we had was out of this world with my personal favorites being the laksa xiaolong bao, the crispy Wuxi eel with 15 year-old aged vinegar, the chrysanthemum “thousand cut” silken tofu in chicken broth, the BQQ pork loin glazed with New Zealand manuka honey, the crispy chicken with spring onion oil and the Dragon Well tea-smoked crystal river shrimp. YES! And there was more on the menu than that! ;) 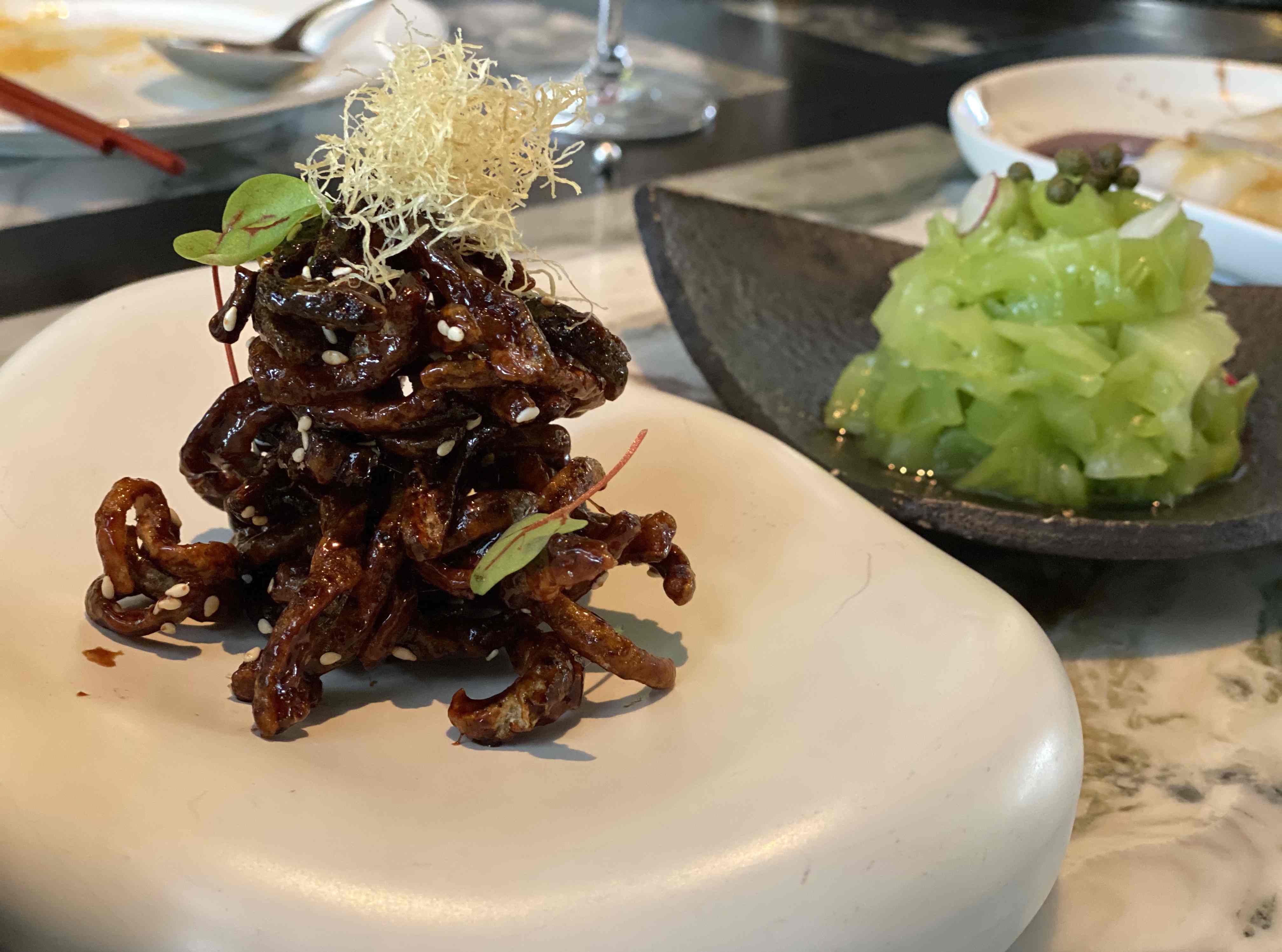 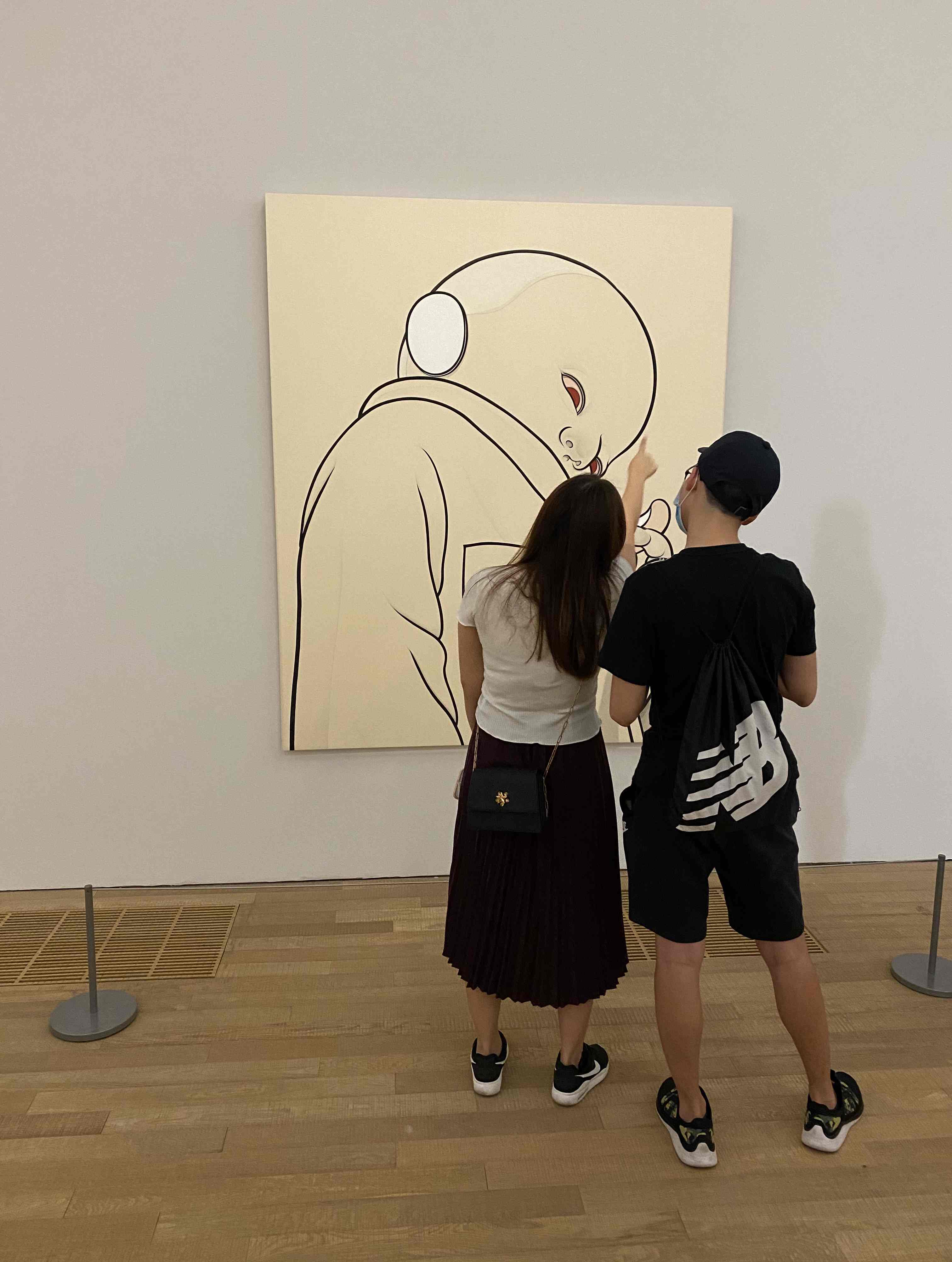 From the "They Do Not Understand Each Other" exhibition.

“I don’t know much about art but I know what I like”. That fits nicely on me and its origins are often attributed to a Mark Twain quote from 1899 however there was a similar reference in the New York Times back in 1880. Regardless I thoroughly enjoyed the exhibit I saw at the JC Contemporary building. JC Contemporary is a modern building in the historical compound and houses a not-for-profit art center dedicated to presenting contemporary art exhibitions and programs. It hosts six to eight exhibitions annually and the one I saw was called “They Do Not Understand Each Other”. It resonated with me as I have often been confronted with language barriers across this pale blue dot of ours. The exhibition was postponed for several months due to COVID-19 but has now opened to public and will be available until September 2020. It is showcased by Tai Kwun Contemporary, jointly presented by the National Museum of Art in Osaka (Japan) and Singapore Art Museum which are two major Asian National Museums. There was some strange stuff exhibited! And some really cool things as well. That is art for you. There were also plenty of kind and helpful art docents (guides) to assist and answer questions which I found really helpful. I have always enjoyed visiting art galleries and museums. Sometimes I’m in and out in no time while other times I cannot get enough. I really liked the “They Do Not Understand Each Other” exhibit and found it very creative - some of it was simply mind-boggling. 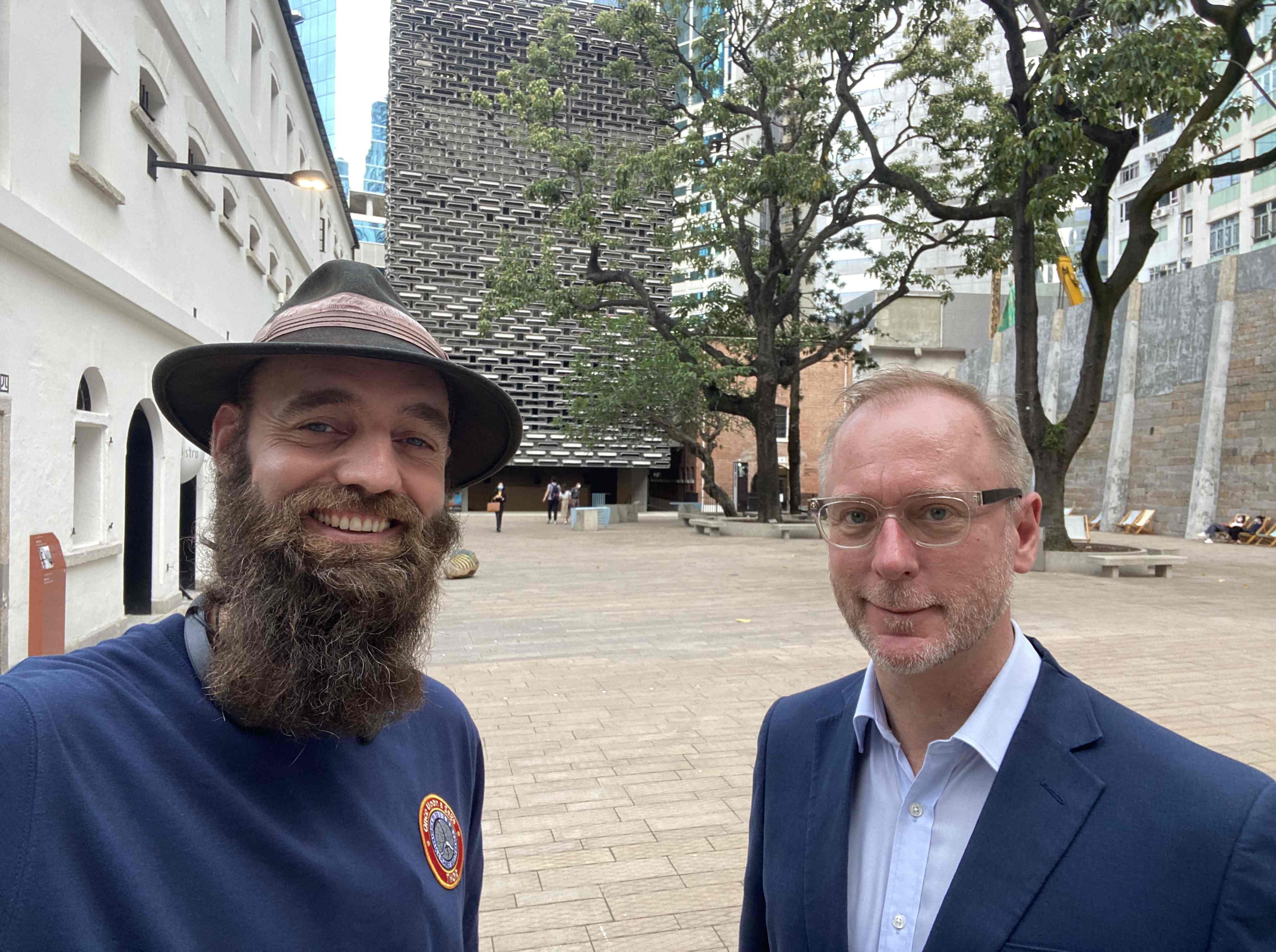 Standing in the 'Prison Yard' with Mr. Timothy Calnin.

Just around sundown I had the privilege of meeting Timothy Calnin, who’s the Director of Tai Kwun Arts. He is a very interesting man and I quickly got the sense that Tim knew every little stone and its complete history as we walked in and out of the historical buildings. There is no doubt that Tai Kwun holds historical value but the focus is on far more than the heritage alone. The compound is full of small shops, cool cafés, restaurants, art and many quiet places to escape the city. And somehow it is all located in the center of Hong Kong only a short walk from MTR Central Station. Tim has been attached to Tai Kwun for several years and remembered when a hard hat, safety shoes and a visibility vest were a requirement before stepping within the perimeter. It was a huge relief when the opening day arrived in 2018 and people began to flood the large complex. Tim pointed out that the classical buildings in British colonial style in fact had Chinese roof tiles making them very unique. Tim also summarized Tai Kwun really well as a way to learn and understand more than 170 years of Hong Kong’s history as well as a place where anyone is welcome to enjoy a huge variety of art forms throughout the year. I definitely enjoyed my day at Tai Kwun and my biggest takeaway would have been that it is far more than a museum (which I just thought it was) and furthermore how much work and detail there has been The revitalization project was funded by The Hong Kong Jockey Club and if you’ve never heard about them before then it can be said very briefly: The Hong Kong Jockey Club,which  is a world-class racing club contributing to the betterment of Hong Kong through its Charities Trust which is one of the world’s top ten charity donors. The Club is actually one of the oldest institutions in Hong Kong and dates back to 1884 so there’s another bit of history for you. 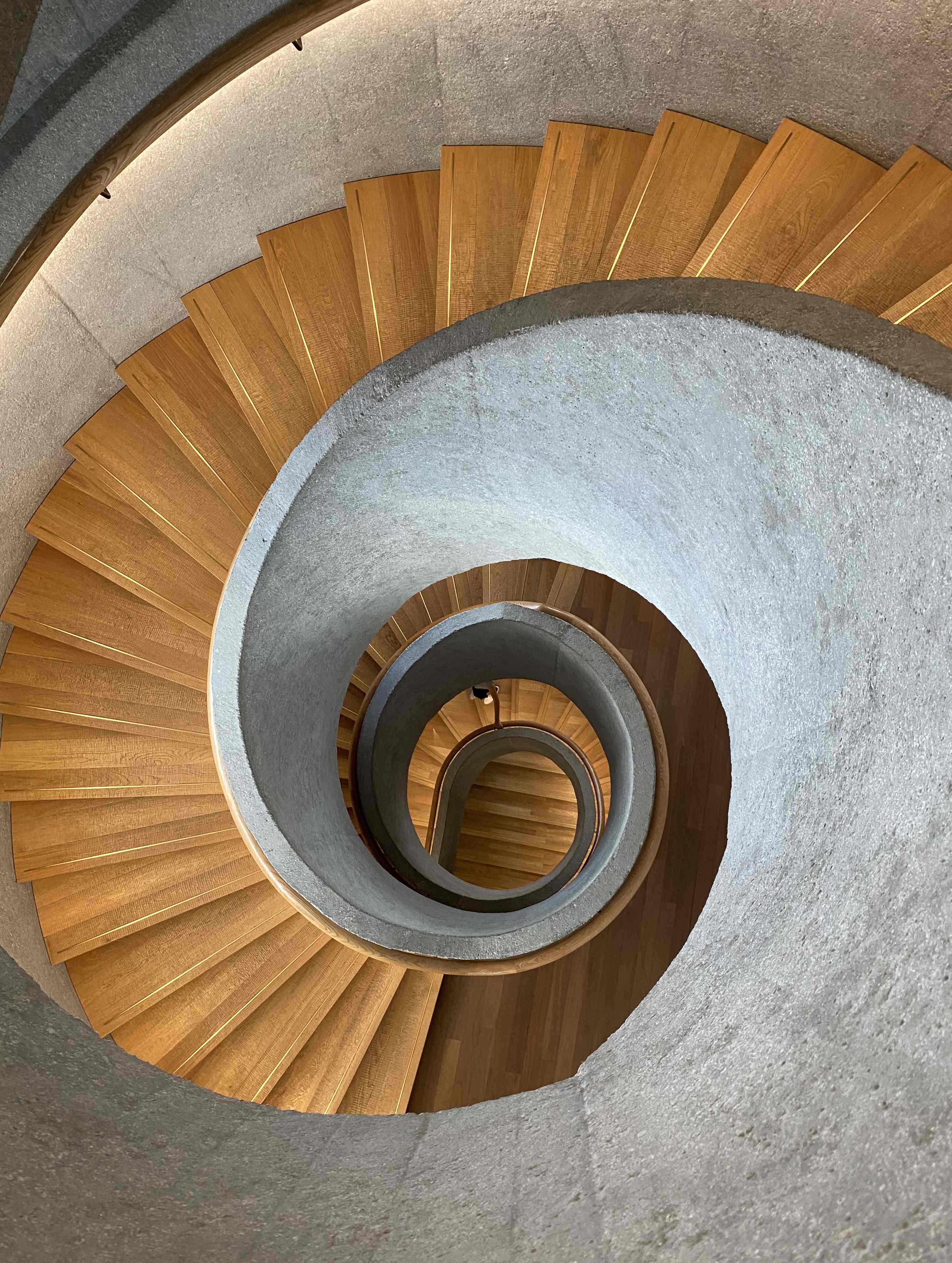 I find myself thinking more and more about family and friends. I have not seen my lovely fiancée since late August 2019, hence my beard is now longer than ever. I really like Hong Kong and over the past four months I have come to learn about a great many places I would like to share with her. Tai Kwun is certainly one of the places I know she would enjoy. But for now we must stay separated as borders continue to be closed and once they open quarantine periods will surely be in place. I have no doubt that if friends and family were visited as often as I think about them then they would be sick and tired of me. The same goes for all the wonderful people I have met around the world. Alas…that is the way it must be. This too shall pass. 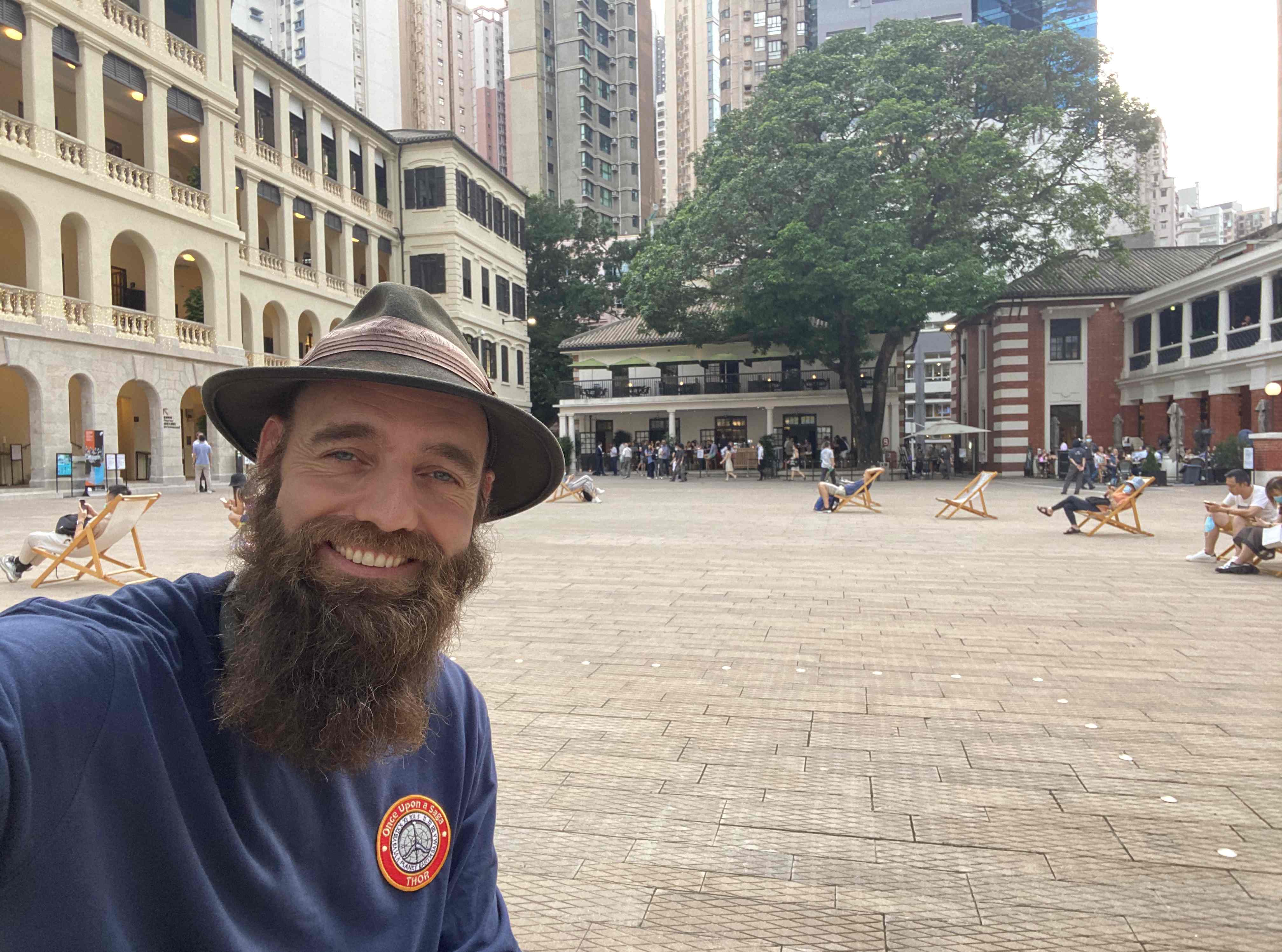 Best regards
Mr. Torbjørn C. Pedersen (Thor) - trying to keep it together
"A stranger is a friend you've never met before"

@Maersk Congratulations! Well done 😃👍 I hope you’re rewarding the seafarers who have had a rough year and those who… https://t.co/mOExZCUW7K

LET THE HONEYMOON BEGIN! 😍🥂🇭🇰 As wifey and I checked into #TheHariHK we found cake and champagne waiting for us ❤️… https://t.co/3JQTrL7RRo