El Salvador and Honduras - you've never tried this before ;)

Have you ever given the meaning of the names any thought? El Salvador means "the saved" and Honduras means "the deep". 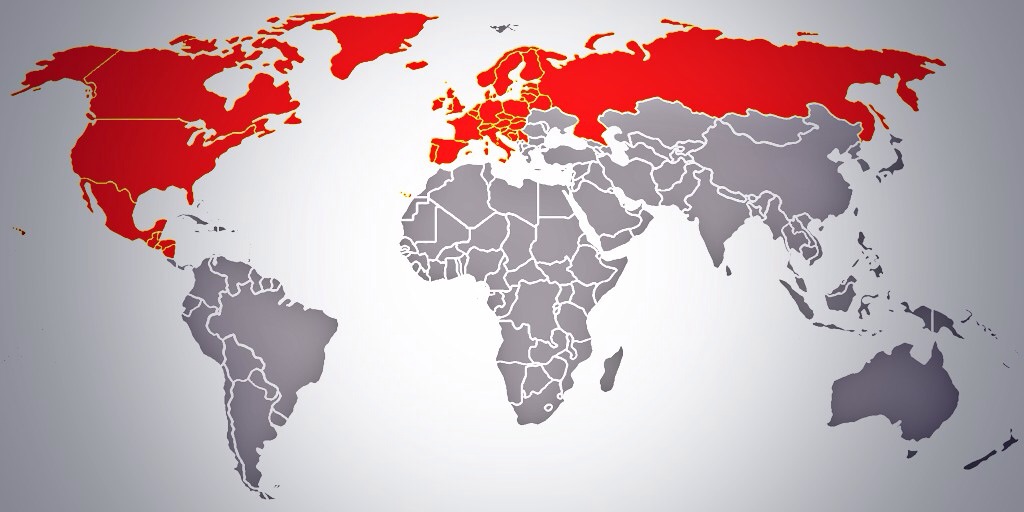 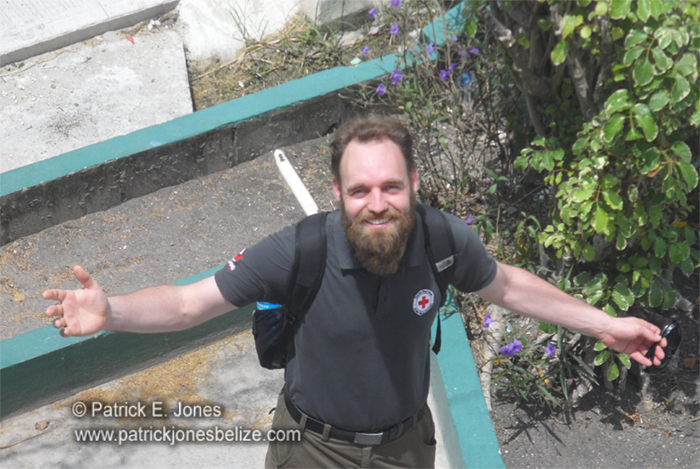 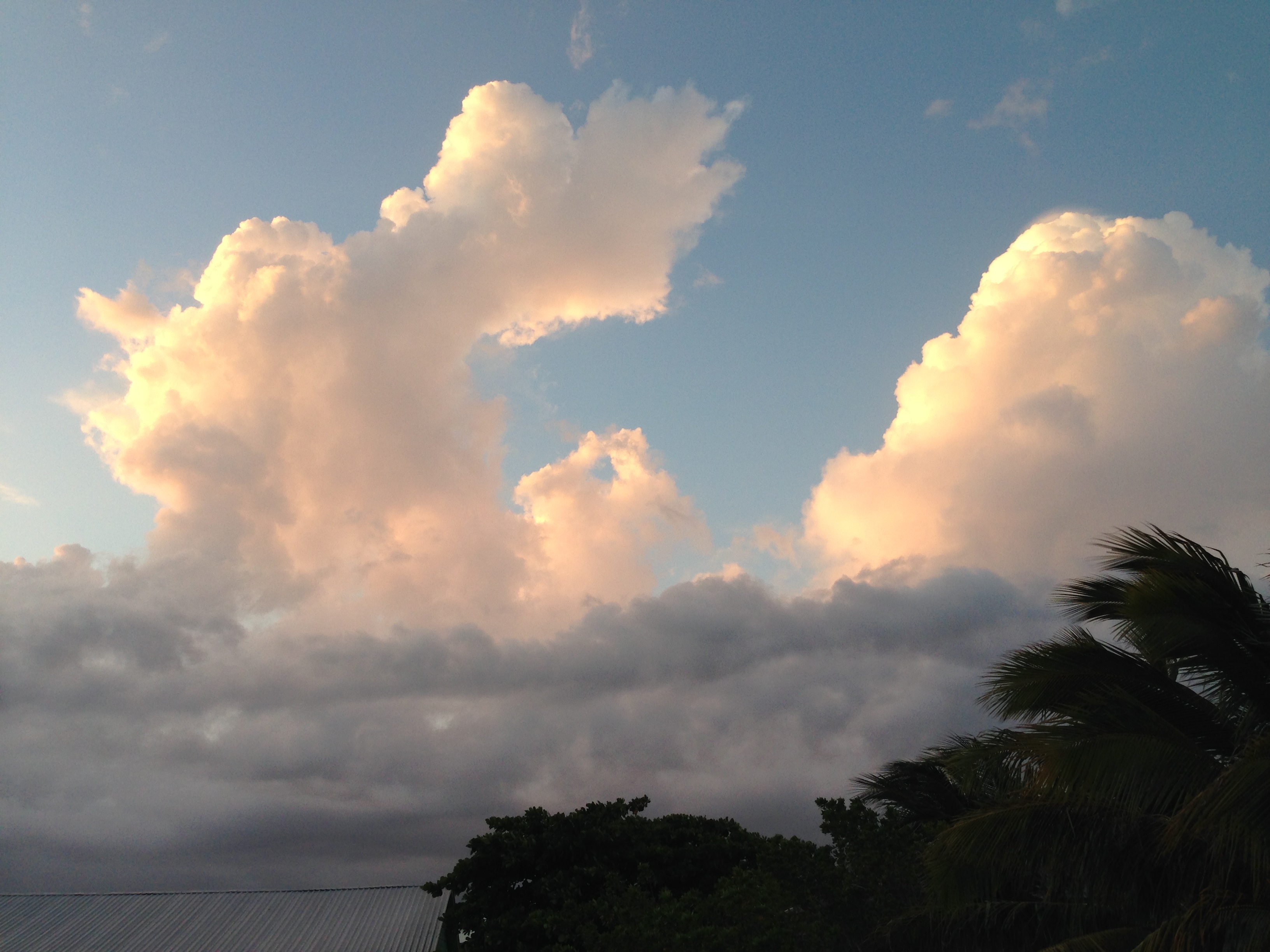 I'm still sorry for leaving Guatemala early. But I did, and hopefully I'll be able to return some day.It was late when the bus stopped near the border of Guatemala and El Salvador. I had to walk in the dark and dust filled air between all the trucks waiting to cross the border. It took me about 20 minutes to reach the border and crossing it was no hassle. But once I entered El Salvador I learned that the next bus wouldn't leave until the next day. That's not really good news. Because hanging out at a border town is somewhat like hanging out in a rugged Wild West town with prostitutes, thieves and hardened souls. I met a guy who knew a place where I could get a cheap room for the night. That meant $12. That's not cheap for a simple room with no air conditioner and a courtyard toilet and cold shower in El Salvador. But I went with it because it was getting late and I had a good feeling about it. Sometimes your sense are all you have to go by. Besides, thunder and lightning was already filling up the sky 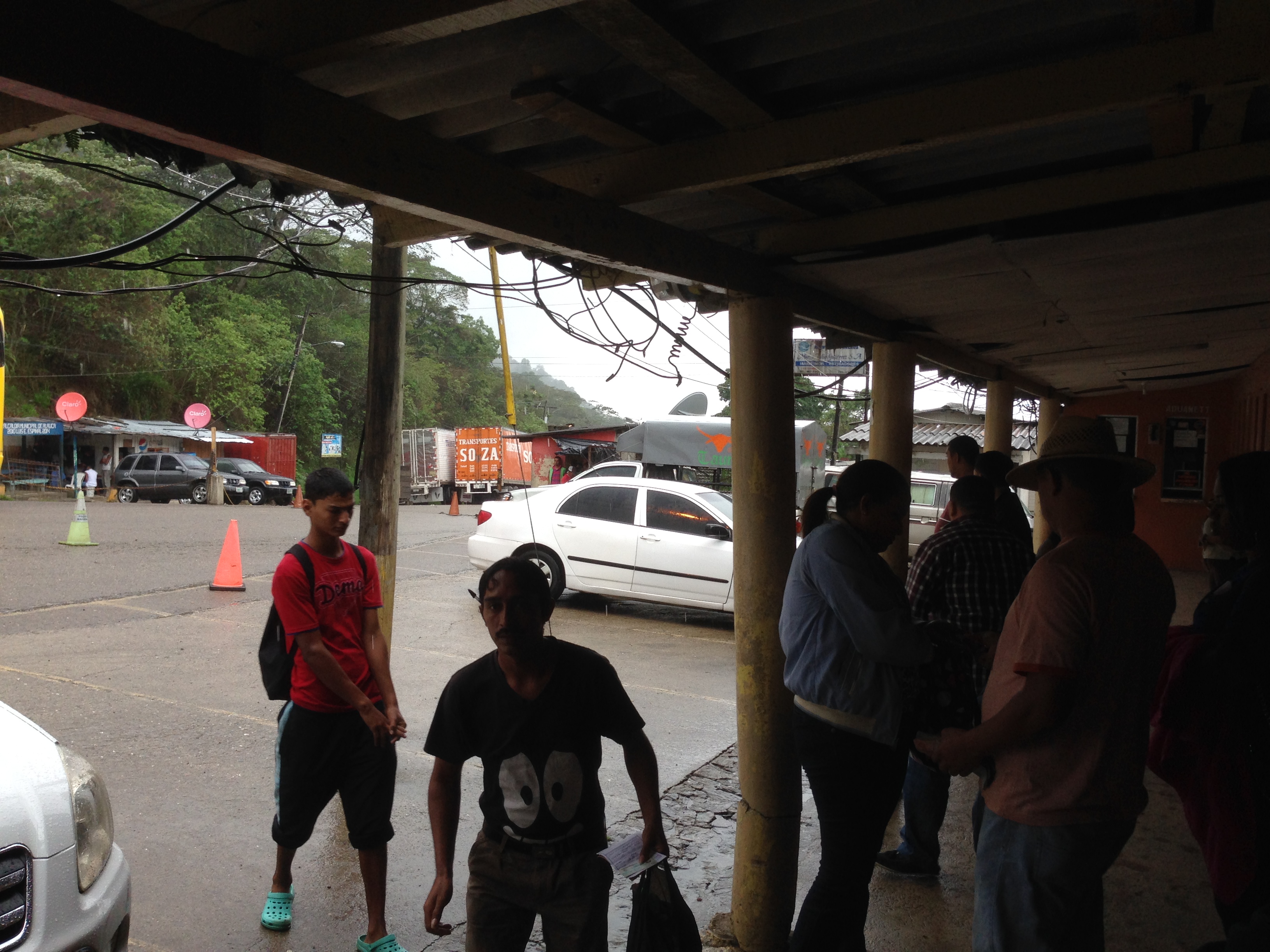 A typical border crossing though blessed with rain.
It's been very hot and humid for some time now. El Salvador was certainly no different and a cold shower is actually very welcome. You sleep more or less naked due to the heat and a blanket is out of the question. The thunder and lightning turned into heavy rain. It's hurricane season but so far that has only meant heavy rain.Next day: The 4 hour bus ride to El Salvador cost me $1. See, that's fair.El Salvador is the capital and it is built on and in between hills, mountains and volcanoes. The country is host to some amazing tropical beaches and the inland is generally covered in lush green with rivers and fields. However poverty is dominant in this Latino flavored society and life is hectic in the city. I got in and out. Stayed 1 night in San Salvador, met with the Red Cross, enjoyed the company of some interesting people at the hostel and went directly for the bus terminal. 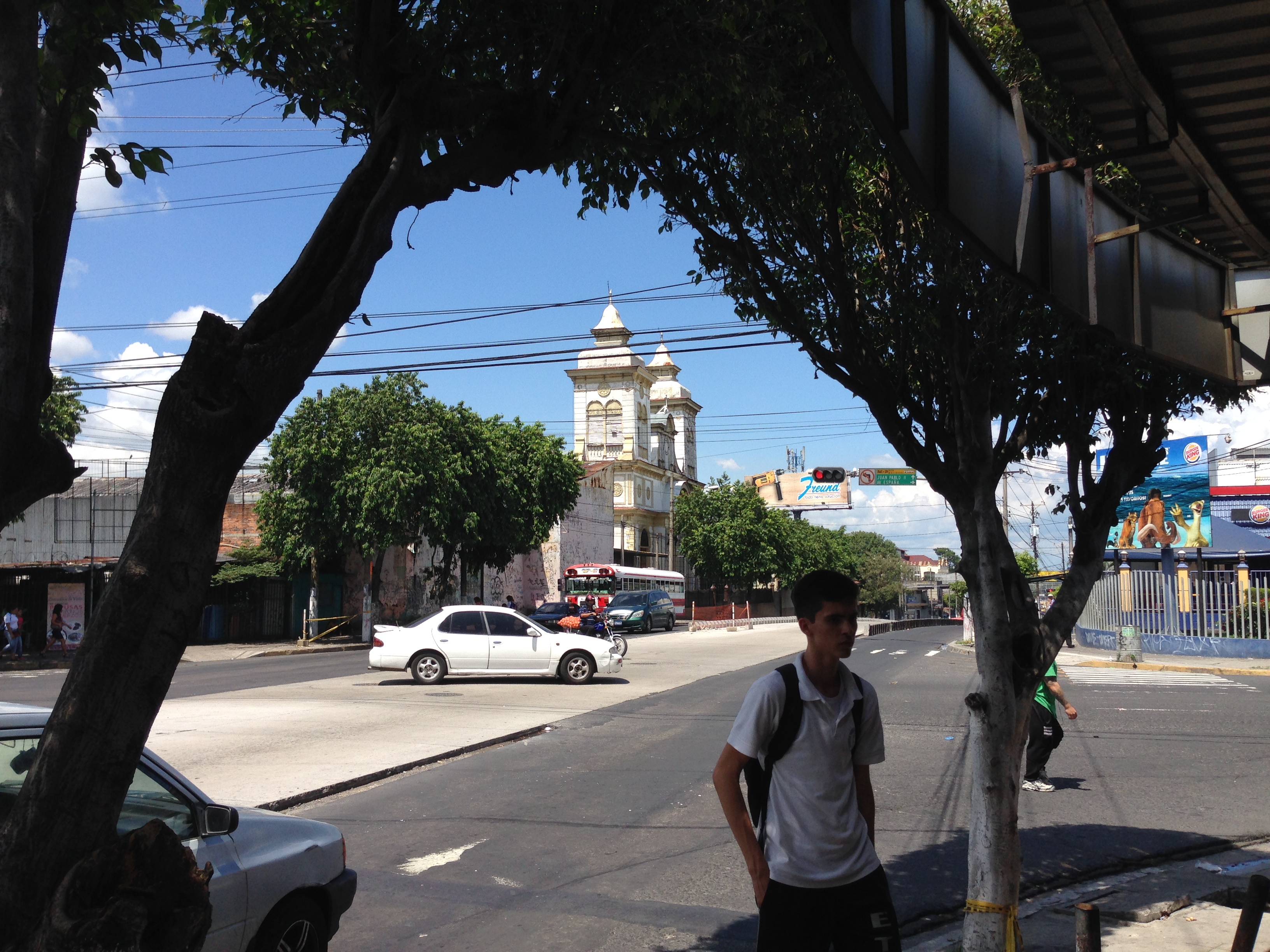 Somewhere between 'Puerto Bus' and 'Terminal de Oriente' in San Salvador.Now, there are a few choices as you travel in Central America. The network of luxury buses is a delicacy for someone like me. They are comfortable, fast, efficient, comfortable and fast...oh...did I mention some of that twice? The luxury bus could have brought me to the Honduran border from the nice 'Puerto Bus' terminal for $25. That is a 2,5 hour trip with few stops. But I'm on a $20/day budget so I chose whatever was behind "door number 2". I'll tell you exactly what you find behind "door number 2"! You will find a cultural experience of sorts that could be similar to being left on an alien planet. In this case: 'Terminal de Oriente'. If you've never experienced the intense feeling of walking in a vivid Latino city, then "door number 2" is not for you. It's a freaking zoo!! But I'm somewhat used to it and the price is right: $1.70. Not fast. Not comfortable. But it's cheap! ;) 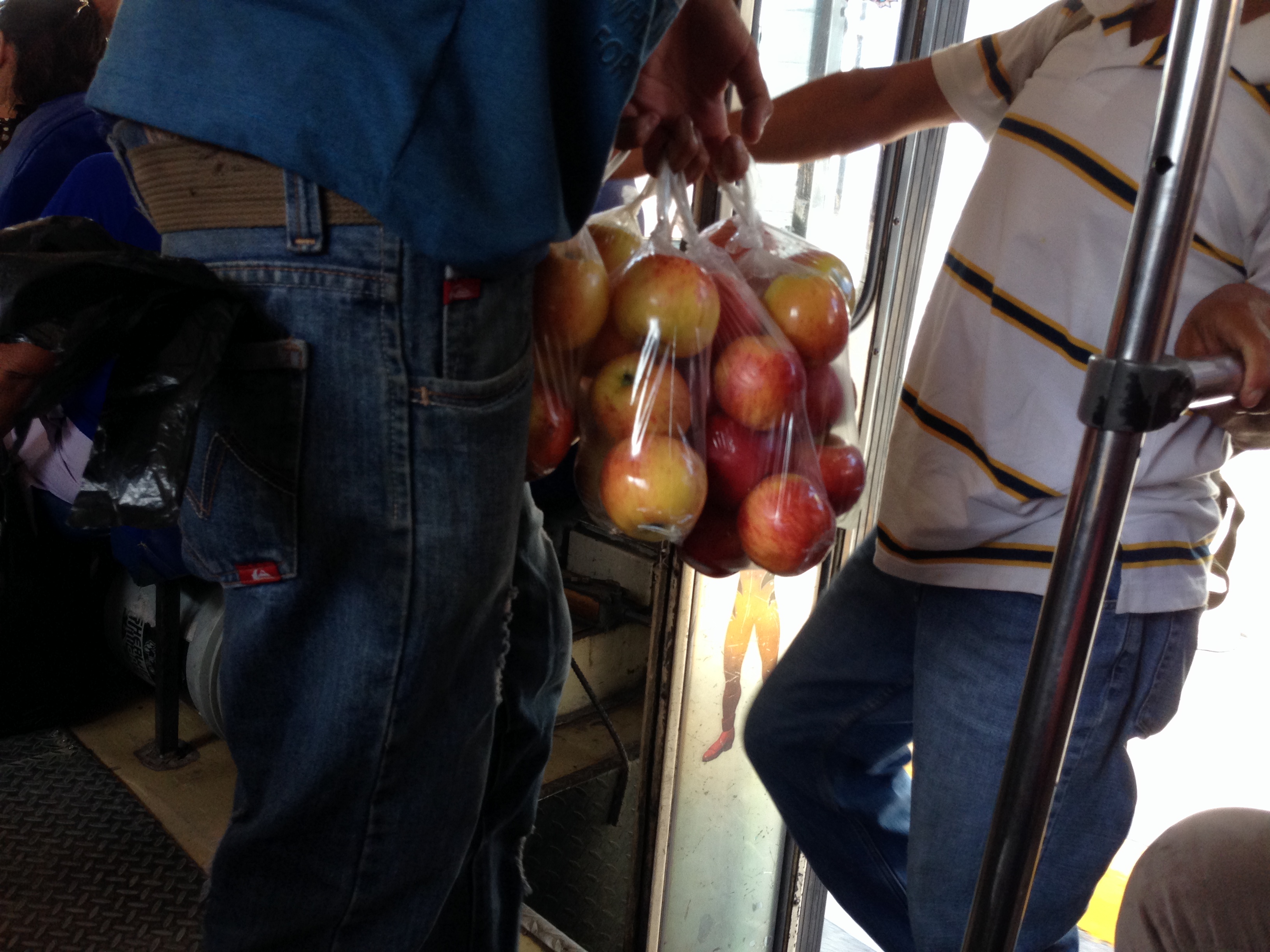 A salesman gets off in the nick of time.Even before the bus takes off you have a frenzy of people storming in and out of the bus turning it into a market place. They sell: bananas, apples, tomatoes, dried bananas, snacks, chocolate, onions, sunglasses, umbrellas, water, ice cream, juice and so much more. And you are not only offered to buy it once or twice! Actually as the bus left the terminal there were still some sales personal onboard but they simply jumped off while the bus was moving in spite of some of them clearly being senior citizens. A woman then approached me and asked if she could take a picture of me. She said I looked like Jesus? She returned to the other women and they were giggling away.The cheap bus stops a lot. People get on and off and every time it stops, about 7-10 sales persons get on and run through the bus in hope of selling something. The last ones in are the last ones off and mostly need to jump off while the bus is moving.The bus eventually reached the border of Honduras. The last few border crossings have been in settings that look a little like small narrow military bases in the jungle. Naturally accompanied with  the kind of dusty people who can get you anything. Oh, did I forget to mention that the guy who helped me with finding a room at the last border had been deported from the USA for illegal drug possession. Just a little bit. For you: special price...Honduras: 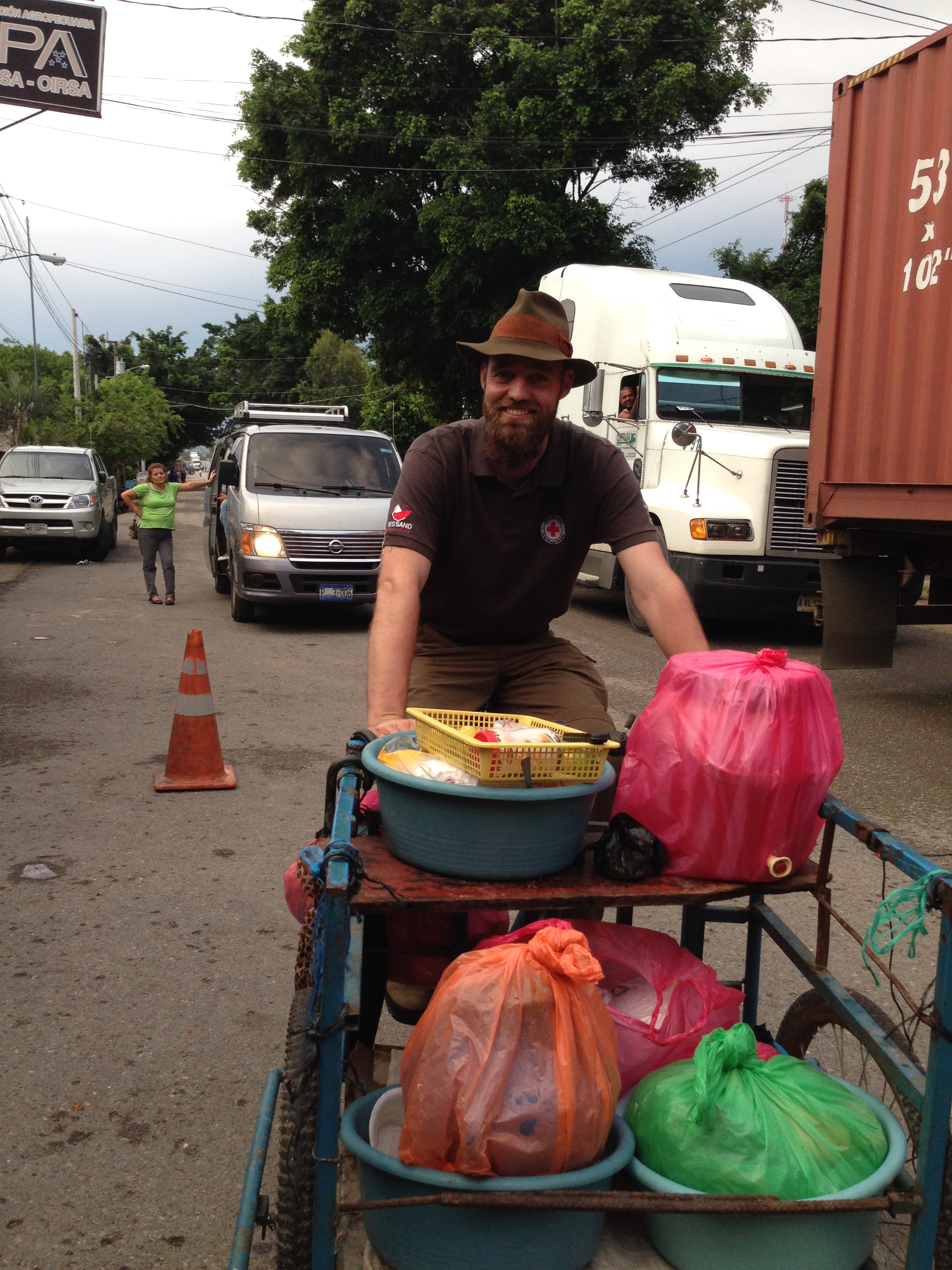 I thought about changing trades and selling food out of this food cart at the border? Hmmm, maybe not.I love countries. All of them. I stand fast on the fact that there are no "worst countries". You are always in the "best country" and it's up to you to make sure of that. I honestly love these countries and enjoy spending time in them. But for some of these countries I do advise you to investigate safety precautions. I'm not saying which - that's for you to work out :)I arrived at 01:00am to San Pedro bus terminal. The first bus to take me onward to La Ceiba would not depart until 05:30. I had a bad feeling about being at the terminal. It was dark. There were a lot of people who looked somewhat desperate in life. The terminal was closed so the only option was to wait outside or head into the city at the very late hour and that's not a great idea. Well, what to do? I moved myself and my bags away from the crowd of night owls to a darker area just shy of a very well lit area. My plan was to rough it out and stay awake without drawing to much attention. I could see a homeless(?) man without shoes lying on a bench in the well lit area. The buses took off and it got very quiet apart from the sporadic discussions and laughter of the crowd. I looked around for some possible escape routes.Then a guard showed up and I sensed that he was trustworthy. He suggested that I moved my bags into the well lit area so he could keep an eye on them. He then kicked the homeless man away from the bench and suggested that it now was mine. I can't say that that I didn't sleep a little. But I can say that nothing happened near me that night without me having either an eye or an ear on it.The bus that took me to La Ceiba was of the small type and the driver was of the kamikaze type. For some reason he wanted to overtake everything on the road even when it was wildly unrealistic resulting in having to hit the brakes and rapidly pull in behind the next target. At this point I was so tired that I could almost cry. But 4 hours more of being in this deathtrap and we had arrived to La Ceiba. The reason why I wanted to get to the coastal city La Ceiba is because of the boat connection to Utila - a small island in the Caribbean. And that's because Thelma, who I met in January 2012, runs a guesthouse called 'the lighthouse'. And that place is a pearl!! A small boat takes you out there for the horrendous fee of $28(!) and the ride is about an hour. I made it all the way across the entire North Atlantic without throwing up...but 5 minutes before reaching Utila my body gave up. Up and into a plastic bag. 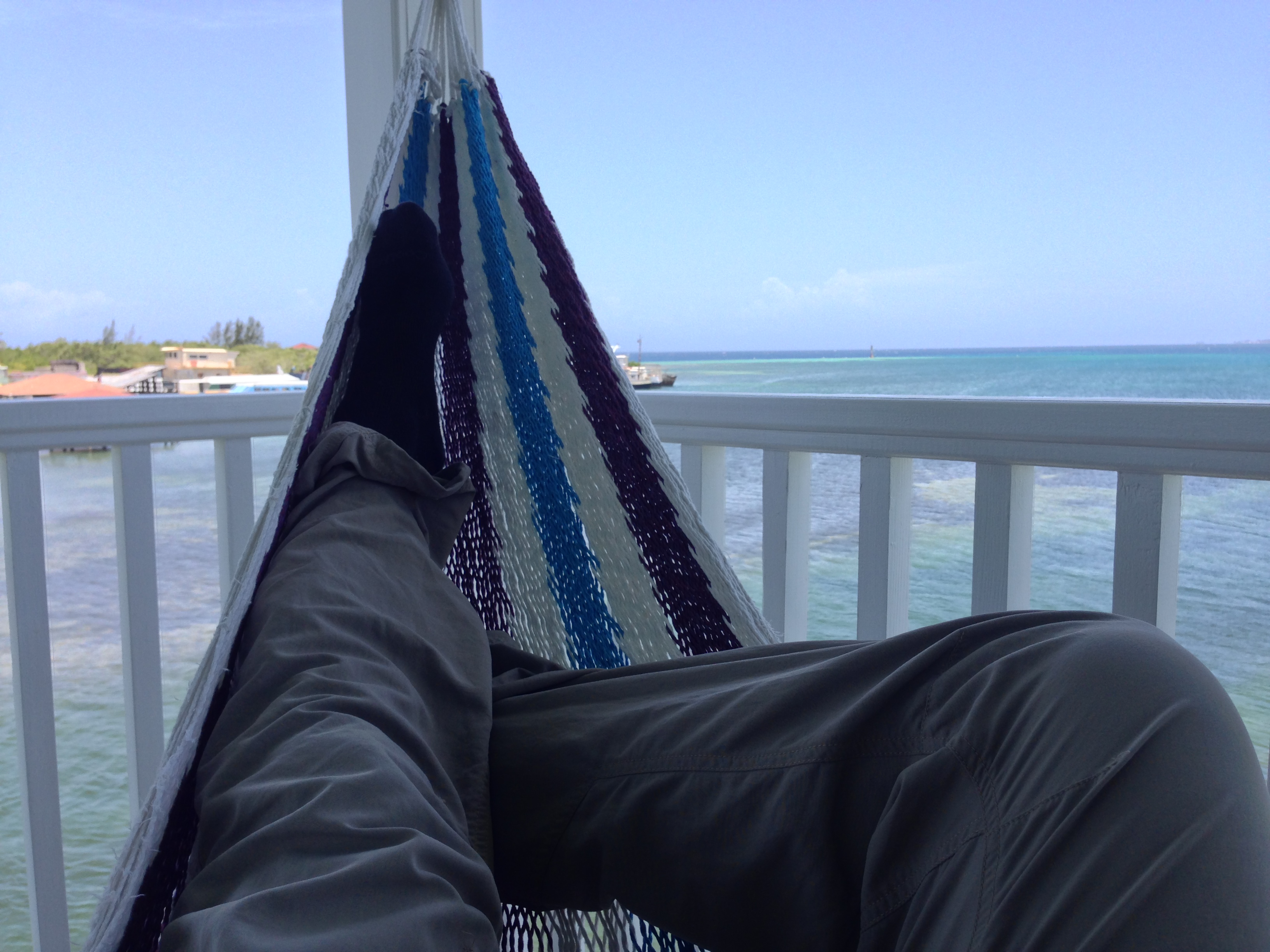 Chilling out at the Lighthouse.Thelma is from southern USA and has lived on Utila for the past 7 years. 'The lighthouse' is a paradise if you need to relax and I already knew that from my visit in 2012. Thelma just happens to be the angel that watches over that paradise. Her husband is nearly 70 and is getting ready to retire. I've never had the pleasure of meeting him but I have had the pleasure of surrendering to the hospitality of 'the lighthouse'. Thelma and her husband have created this guesthouse which sits on pillars not far into the ocean. A solid bridge leads out there and it's all been kept in a classy white style. It's a different world.Utila itself is probably best known for diving. It's a tropical island with very simple infrastructure and a massive amount of tourist traps and some nature reserves. Mopeds and tuctuc's seem to have taken over which is ridiculous since there are no real roads. You can easily get around by walking or with a bicycle. But that's progress I suppose. It does not matter to me as long as I get to spend my time within the comfort of the fence that surrounds the garden at 'the lighthouse'. And as long as I have the sunset that bathes it in the evening before the stars come out I'm fine.I really wanted a photo together with Thelma!! But that was not an option. She purely refused though with a kind smile on her face. Just imagine kindness and hospitality personified. Thelma was already back in 2012 a friend I've never met before. And she fully supported Once a Upon a Saga without me having to ask. I left with my personal batteries charged. 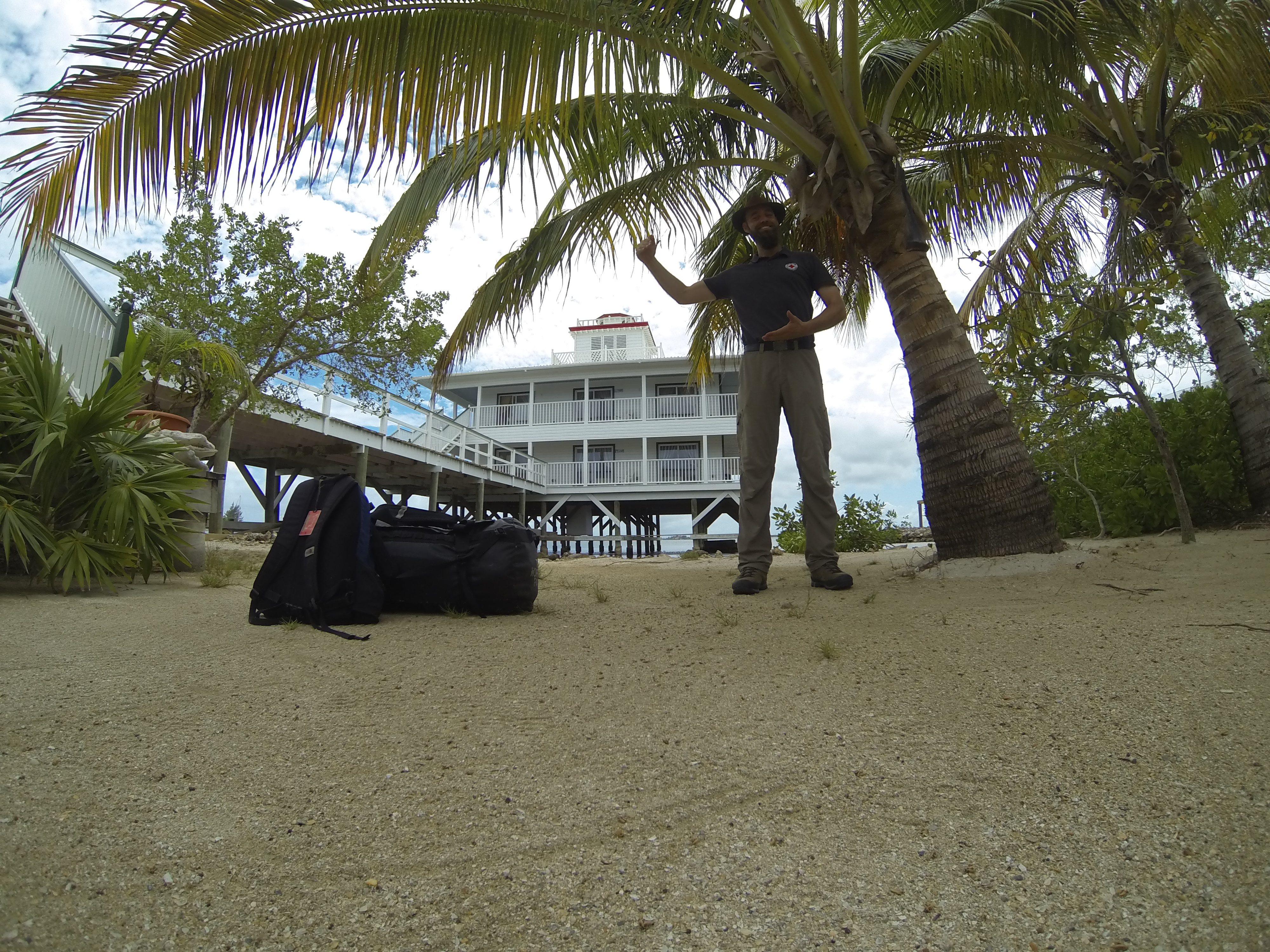 Me pretending to have my arm around Thelma. Just imagine. That's the Lighthouse in the background. 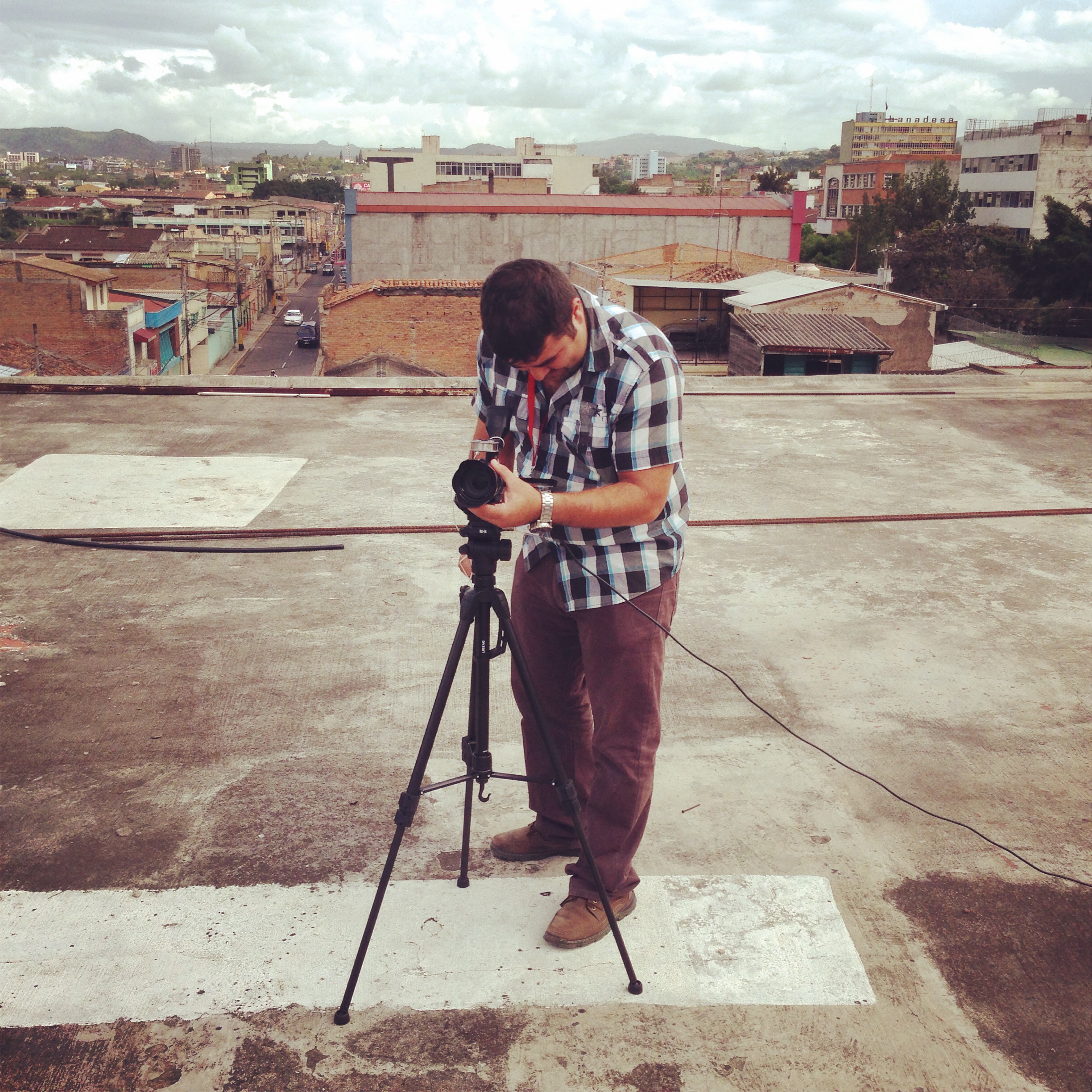 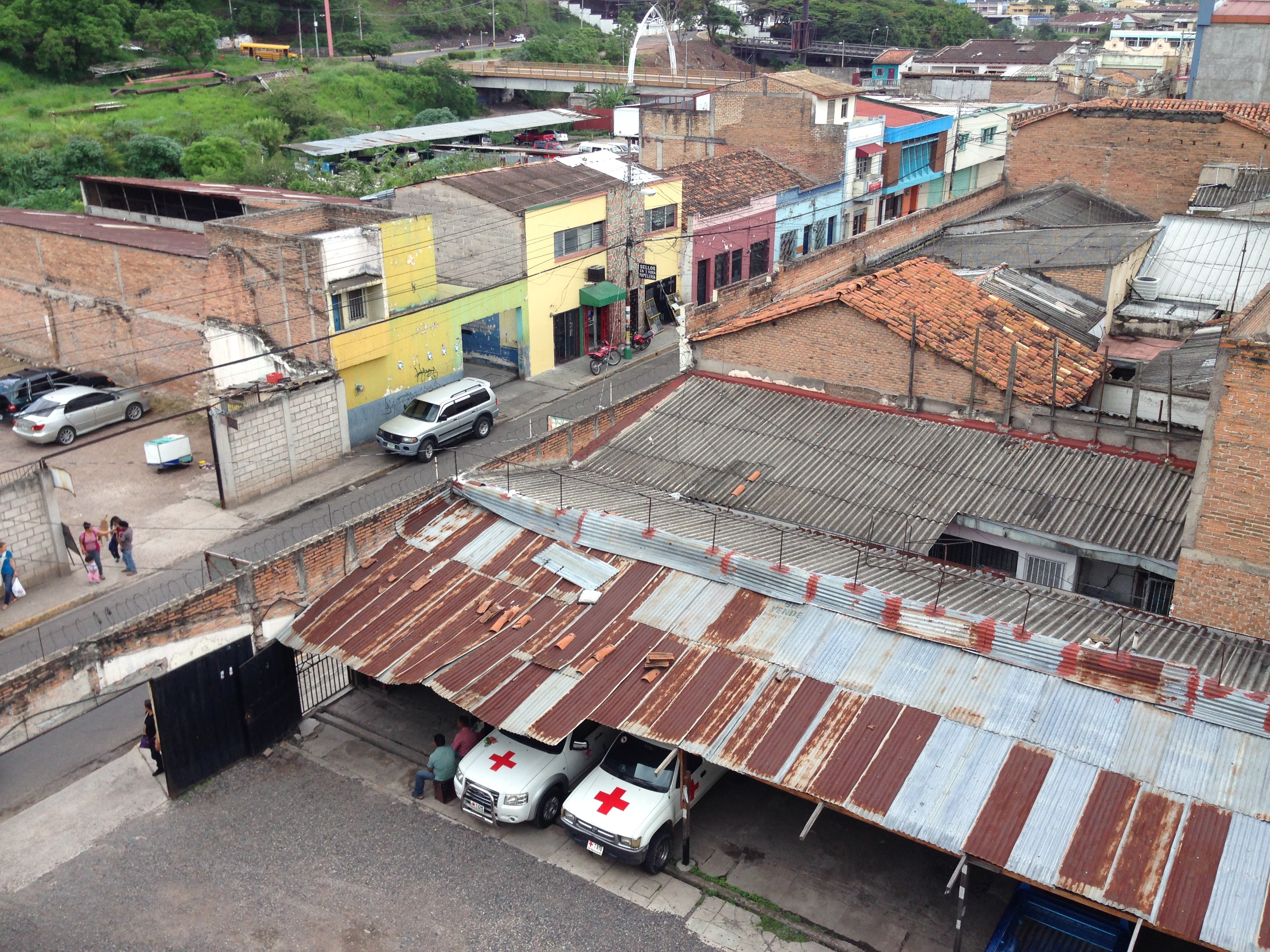 I have such a profound respect for the Red Cross after having visited more than 40 offices. I am blown away by the impact it has on human life across the planet.

Honduras is like the neighboring countries - a country that people from Europe only have in their dreams. It's covered in lush green forests and there are mountains, rivers, ancient Mayan temples, exotic beaches, fantastic food, great diving and everything that makes a paradise. There is a snake in that paradise though. But seriously; if you walk down the wrong street in Tokyo, Paris, New York, Sydney, Copenhagen or anywhere else you may find something unpleasant. Just stay away from those streets and if you are in doubt then ask the locals. They know. I have never encountered anything bad in central America. I only see the beauty and the smiling faces. The friendly, curious and helpful people. I hear stories. But I only experience the good things. Am I just lucky - or is our perspective wrong?

Hanging out on top of Honduras Red Cross office for the press. I'm getting a lot of experience on this trip.I'm in Nicaragua now resting. We will certainly reach 50 countries in less than 9 months. But some of this adventure has been tough on me and I feel the need of rest and recreation. A little R&R if you will. So although I've been in Nicaragua for a little while now their isn't much to report. But there will be in the next blog ;) 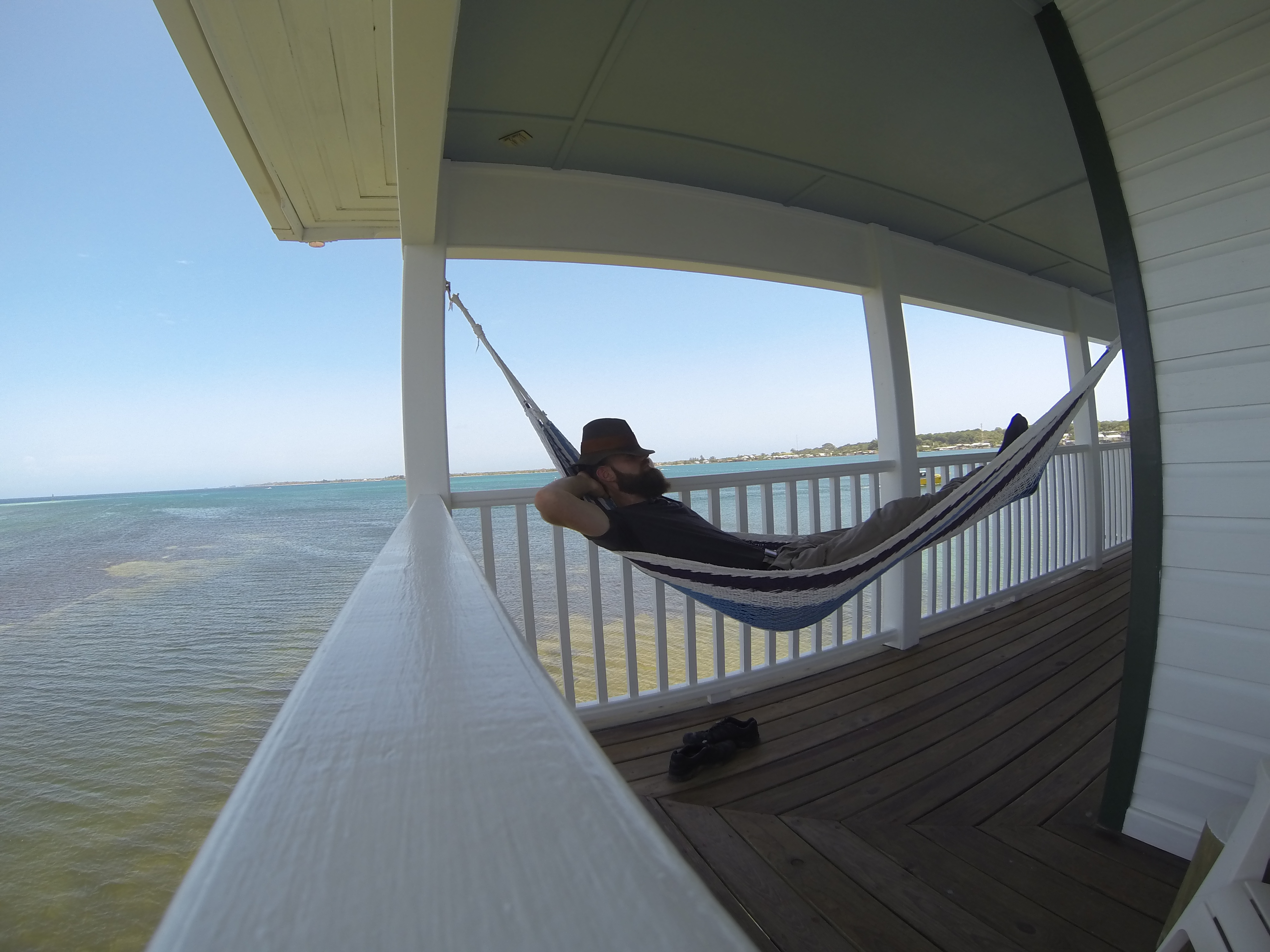 This picture is actually from Thelma's Lighthouse...but it represents what I'm dooing in Nicaragua right now ;)Best regardsTorbjørn C. Pedersen (Thor) - a man pushed forward by evolution and opportunity, and you!