Have you ever wondered what makes your home; your home? How can a place feel right or wrong? It's most definitely the little things...and enough of them.

I reached León, a small dusty but vibrant place about an hours driving from Managua. I had decided to rest up for a while in Nicaragua and I really needed it too. I was dreaming about a quiet place where I could relax, read, sleep, do nothing... I was recommended to stay at a place and went straight for it...but I didn't find the quiet paradise I was looking for and to be honest I was stressing out about the noise for the first 24 hours but after that I started to adapt and accept. The place was nice enough but in the daytime cars, busses and trucks would pass by the entrance to the courtyard and it would echo loudly. In the nighttime the police officers would patrol the streets and constantly blow their whistle for reasons unknown. And day and night random noisy firework would be launched into the air - just for the noise I suppose?! Central America IS a noisy place.

León; the square in front of the cathedral in the evening time - everynight.Noisy because people are alive I guess. Alive in a way that is uncommon in Northern Europe and North America. In the evenings people are out dinning, dancing, socializing in various forms and talking with each other or simply hanging around observing and enjoying the fresh evening breeze.In Central America you are most places kindly asked not to flush any paper into the toilet. You may have experienced the same thing on a vacation somewhere. Showers are mostly cold and it just becomes natural and comfortable as a contrast to the hot humid days. The little things.Busses commonly stop for bathroom breaks and meals. If someone whistles loudly on the bus then it is a signal to the bus driver for stopping. A whistle when the bus is not in motion means that everyone is onboard and that he can go.

Bus terminal in LeónIn a lot of Europe and North America you will need to chase down a taxi if you need a ride. Not in Central America. In Central America the taxis chase you...all day long. And come to think about it, at restaurants after a meal, I have never been asked if I want coffee?

Near Telica volcanoStaying in the same bed for more than 3 nights at the hostel and not needing to worry about  transport or anything else was really nice. I remained very introvert the first few days but then started opening up and speaking with some of the other guests. For some odd reason it turned out that most guest at this hostel were longterm travelers. Several months or even years out exploring the world. Very nice for a change.

Telica volcano where I saw lava!! :)

I spoke to Tierra Tour (www.tierratour.com) after having rested up for a while and they invited me out for their Telica twilight tour. The Telica volcano is highly active and one of the few volcanos in the world were guests can easily access the volcano opening and stare down into boiling lava. Unfortunately it had been raining really hard earlier that day which created some additional fumes that shadowed over the lava. But I did manage to get a 30 second glimpse out of about 1 hours waiting time...and that counts!! I have seen lava! :)

The best thing about the Telica trip was by far the company. I enjoyed the company of 3 very lovely and highly interesting travelers. Two of them from the Netherlands and one from England. Our guide Alex was very competent and very pleasant to be guided by so the trip with lava, scenery and great company was entirely a success.

Yessica, Monique and Sophie - people I could spend a lot more time with.I have no clue how many people I might have met since I left home. But it could be close to 10,000 if you count every interaction with everyone. I certainly remember a lot of faces and situations and they randomly pop up in my mind when I lest expect it. I do tend to agree with Shakespeare's famous quote: "parting is such sweet sorrow". Mostly because I love being on the road discovering new things and meeting new people. But I feel a very heavy burden in my heart when I meet someone I would like to spend more time with. And the amount of those people is rapidly building up. My week long stay in León created quite the "body count" in that regard and hopefully I will have the skill to stay in touch with all of them. "Good people always meet again".

Rain in Paradise.I don't mention the Red Cross as much as I could. I greatly feel that the Red Cross has a vital role in this world and I for one would not want to live in a world without the Red Cross. Perhaps because I have learned so much about the extraordinary impact on daily life for millions every day. The Red Cross is a lot more than people think and you are unlikely to learn about what they really do until you need them. They are still a bunch of hippies though :) I mean that in a good way. But it pisses me off that I hardly ever get a reply to my emails when I advise them about my arrival. I think that apart from Canada and Belize I have received absolutely NO REPLIES since I came across the North Atlantic. That means that when I show up at the various Red Cross offices then the first 30 minutes are normally spent discussing who I sent the email to, when I did it, who's fault it might be and blah blah blah. On 1 occasion, quite funny actually, the Red Cross office had printed out my email, stamped it...and when I arrived I was requested to sign it! :) 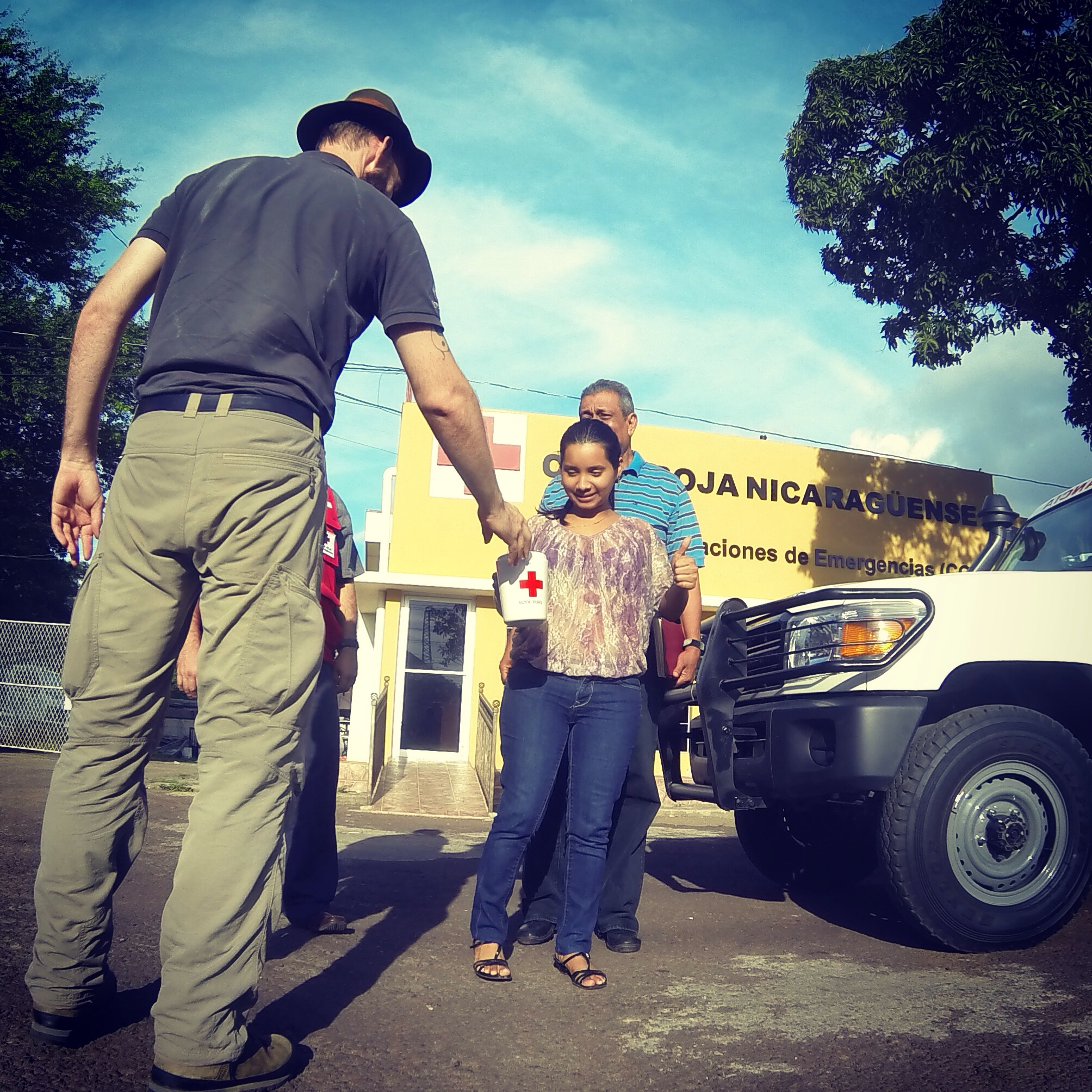 Small people - large impact.But trust me! The work carried out in the name of humanity by the Red Cross is mind boggling!! If the Red Cross pulled out tomorrow then the entire planet would stand in chaos. And that is no overstatement.One last thing on Nicaragua: it's breathtaking! I saw much more in 2012 when I first visited. Including the island of Ometepe. Being on that island is like falling into a Disney cartoon with monkeys jumping from branch to branch and Toucans flying about while the 2 massive volcanos reach for the sky. Check it out. Costa Rica

Nicaragua/Costa Rica border crossing.Costa Rica is such a unique place on this planet. They have had no military since the forties and the small country that only amounts to 0.03% of the worlds surface holds a staggering 5% of the entire worlds biodiversity. Unfortunately it was not on this trip that I would get to venture deeply into that. In fact I have not seen a single butterfly because I headed directly to the capital: San José. I had a mission of my own. Since DB Schenker joined as a partners on Once Upon a Saga I have been wanting to send home my winter clothing. But I have been waiting for the opportunity to do so and Costa Rica was that exact opportunity. So I needed to get a box, pack it, label it and all of that. Sounds simple right? Well, you would be surprised ;) But it worked out. Then of course I also needed to get in touch with the ever so lovely Costa Rican Red Cross who did not reply to any of my 3 emails. And if you are thinking it's because they are in English - then you are wrong. Because Jorge (Red Cross Honduras) has been an amazing help since I met him and he made a translation for me. Oh well... 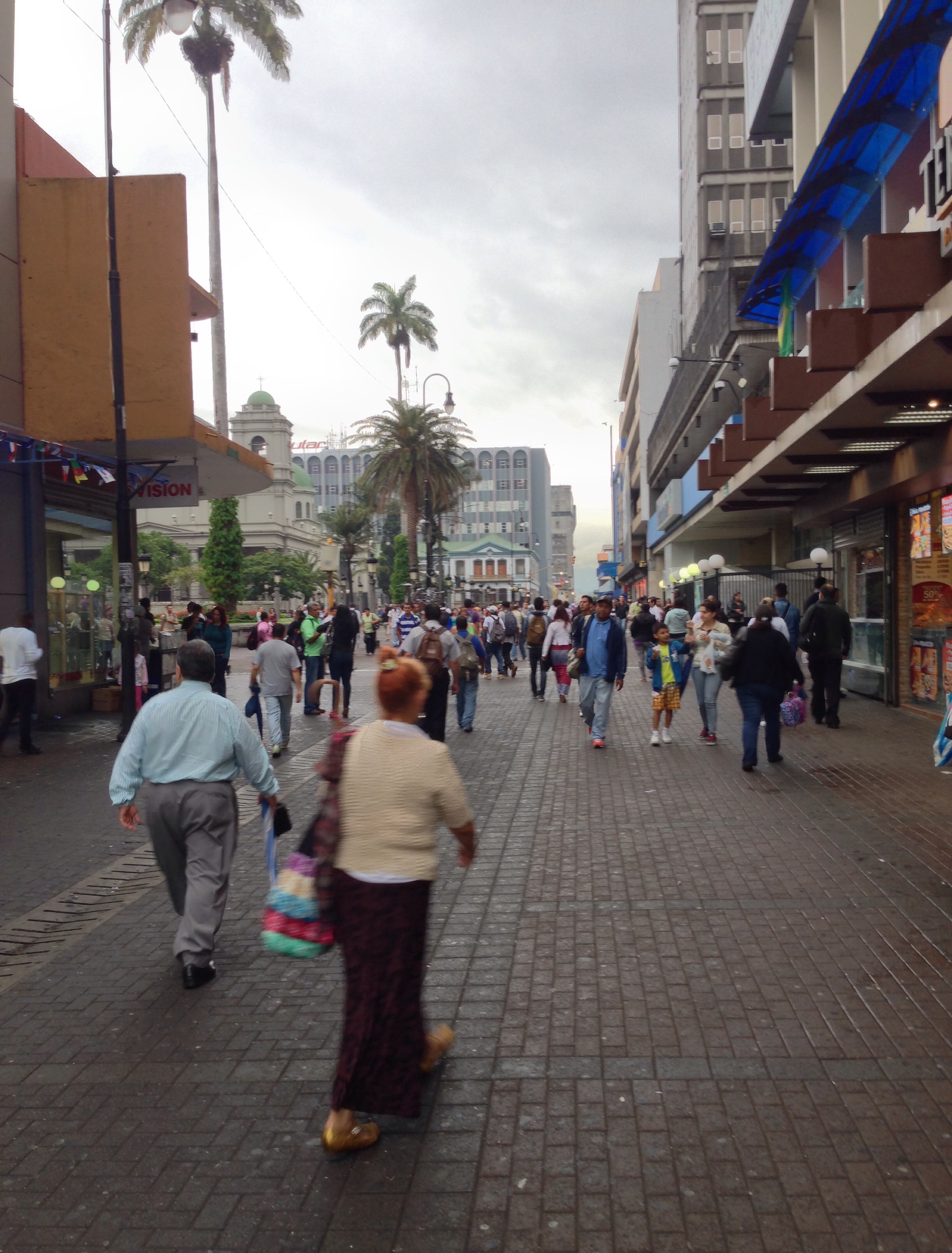 San José minutes after the rain.San José is not the best part of Costa Rica. It was dark when I arrived and when I turned down the many taxis I often heard them say: "muy peligrosa" which means "very dangerous". And walking around the city in the nighttime did give me a sense of not being completely safe...but it could also have been the psychology of the taxi drivers still echoing in my head. In any case I know for a fact that the little country is full of spectacular and breathtaking places to visit and the capital just looks like a big busy city. So I would not spend much time their another time. However EVERYONE I approached was friendly and forthcoming and I eventually got my box and tape for free :)I left the Red Cross around noon and headed straight for the bus station. The bus took the scenic route from San José through spectacular mountain landscapes and over to the pacific coast. From there I could enjoy the marvelous view until nightfall and finally ended up at the border to Panama - where I am now. Actually Panama is about 100 meters from my hotel room. Tomorrow I will enter Panama making that 50 countries in less than 9 months. Unbelievable when you think about the many ocean voyages, the full month in Iceland, the 2 months in Greenland and an absolute minimum of 24 hours in every country. How is it even possible? Well, thank you all!! Best regardsTorbjørn C. Pedersen (Thor) - still on the move as if my behind was full of Duracell!!