Venezuela - a snake in Eden, or not?

As the bus entered Venezuela and had passed the first few border populations the landscape opened up to a spectacular view. Dark threatening clouds were hovering above this landscape which I can best describe as a green version of the Sahara desert. Picture a classic Saharan landscape with sand dunes as far as the eye reaches. Now picture that the golden sand floor is dotted randomly with palm trees and a number of oasis' where groups of palm trees create small forests as if they were islands in the sand. If you can, then picture that the sand has been replaced with grass. If nothing else then that is the sight that met me and I could almost feel the beauty fill my soul from the bottom and up. 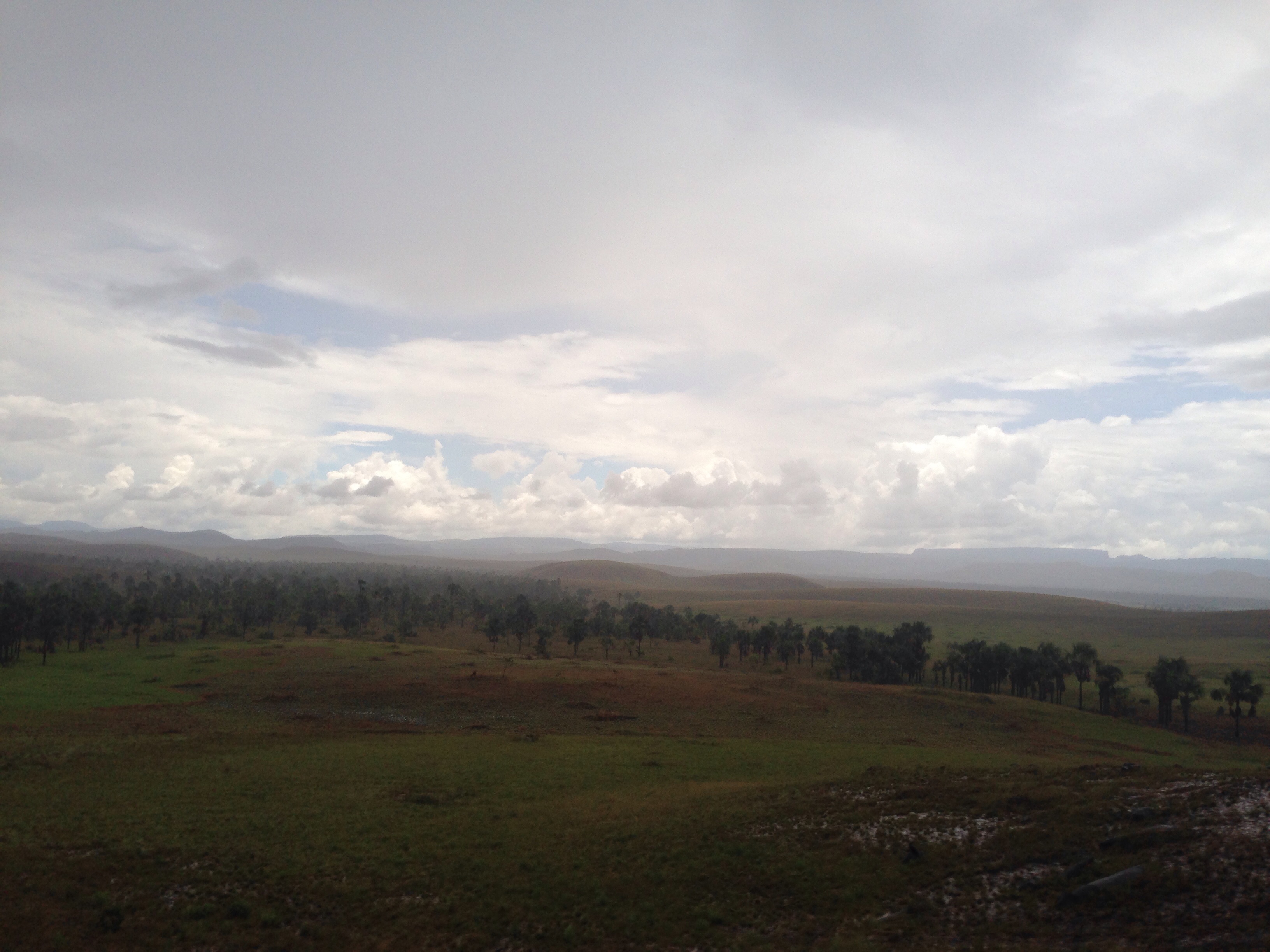 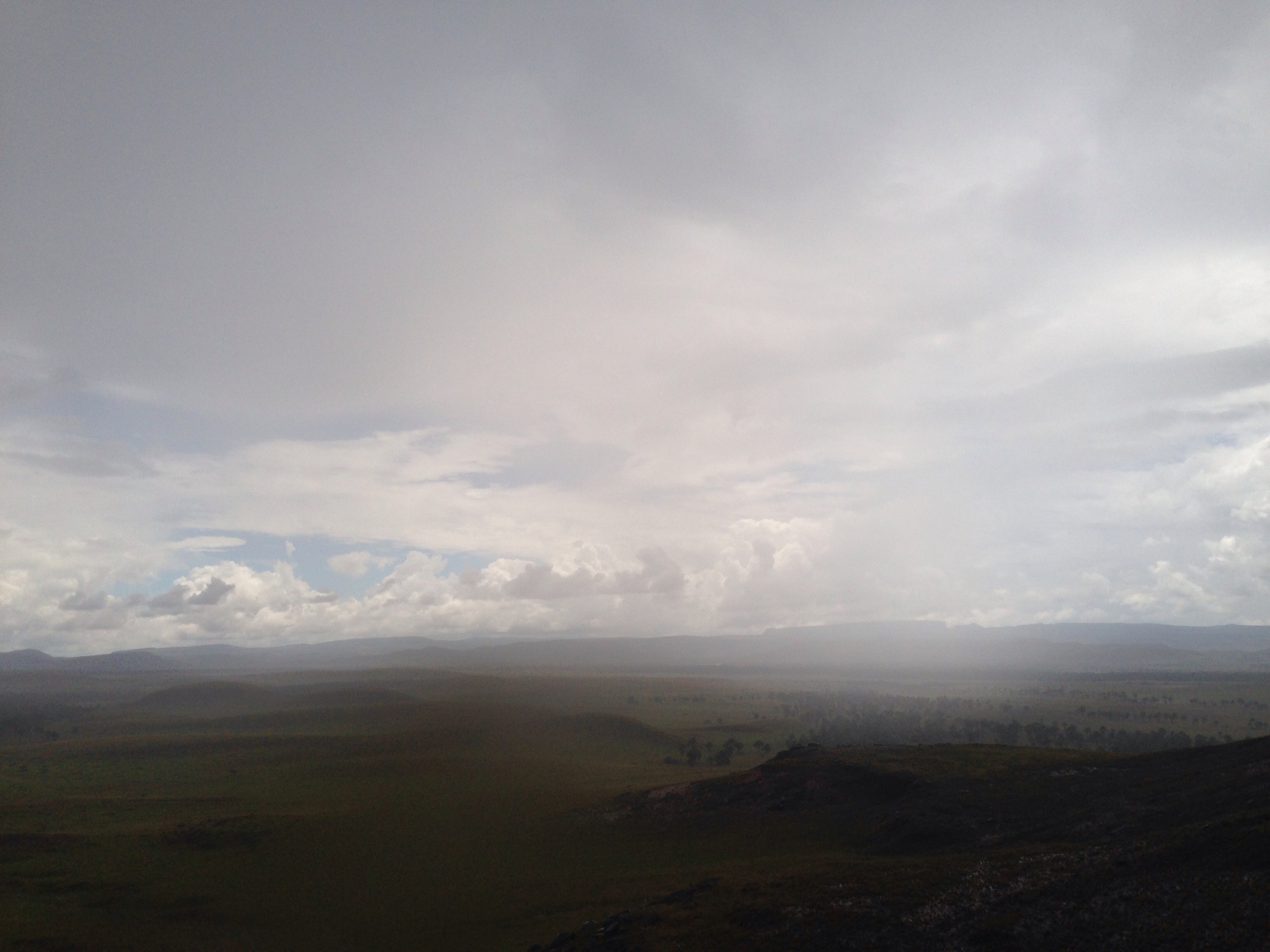 The beauty of Venezuela had me at "hello".That was my entry into Venezuela. But before I got that far I still had to reach the border and I was in Suriname...a few countries away. To be precise it took me:- a minibus from Paramaribo to the ferry at the border- the ferry across to Guyana- a minibus to Georgetown- a minibus to Linden- a minibus to Lethem (painful dusty ride)- a walk across the border to Brazil- a bus to Boa VistaAnd finally a bus onwards to Venezuela. I did all of that in more or less one go and most of it in fantastic company. I met French Agathe at the guesthouse where I stayed in Paramaribo. We sat and talked throughout the evening and the next day she continued traveling while I stayed. But chance would have it that a few days later we were both on the same ferry to get to Guyana. So from there we traveled together all the way to Boa Vista and it would have been a lot harder without her company. 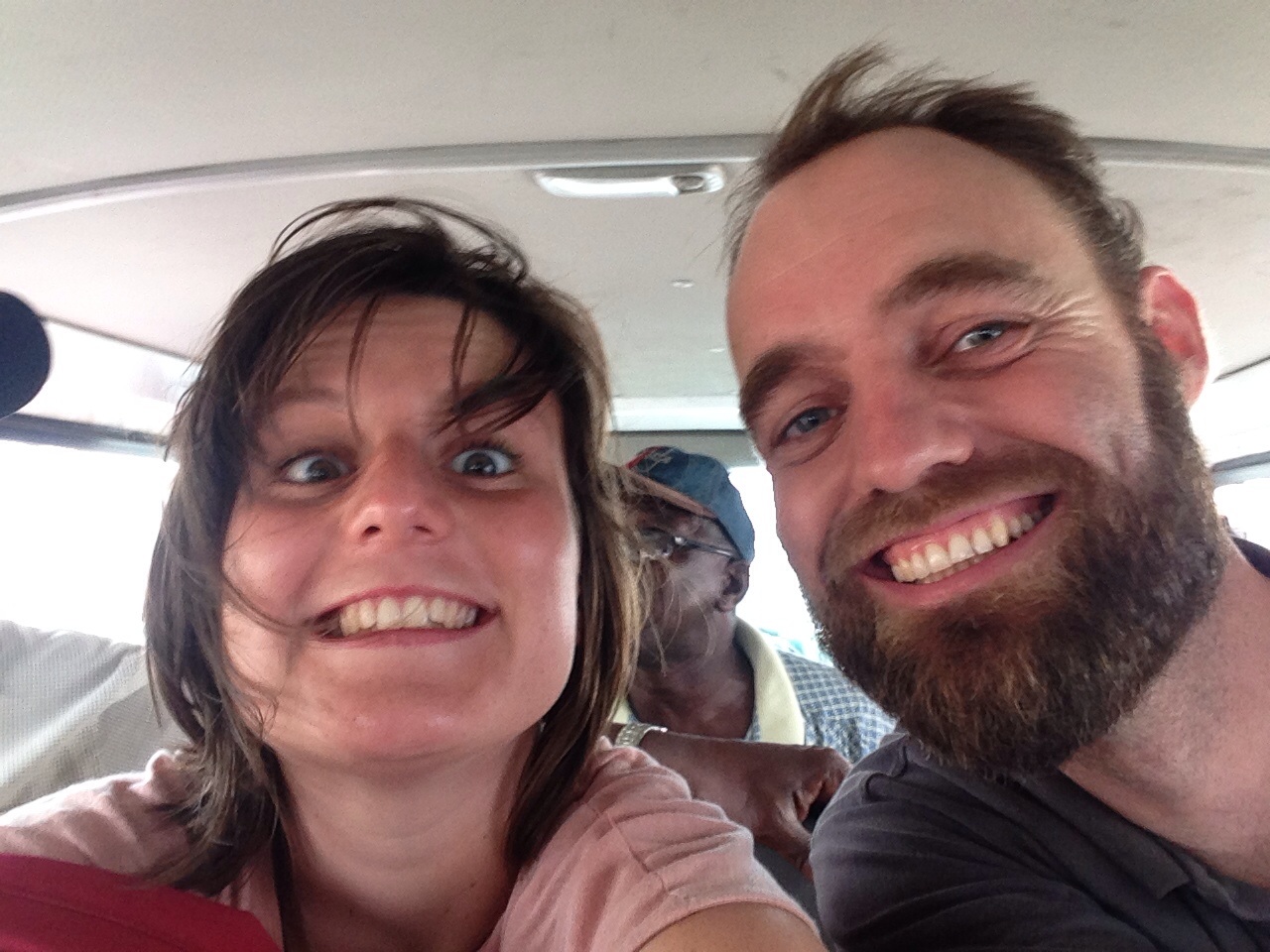 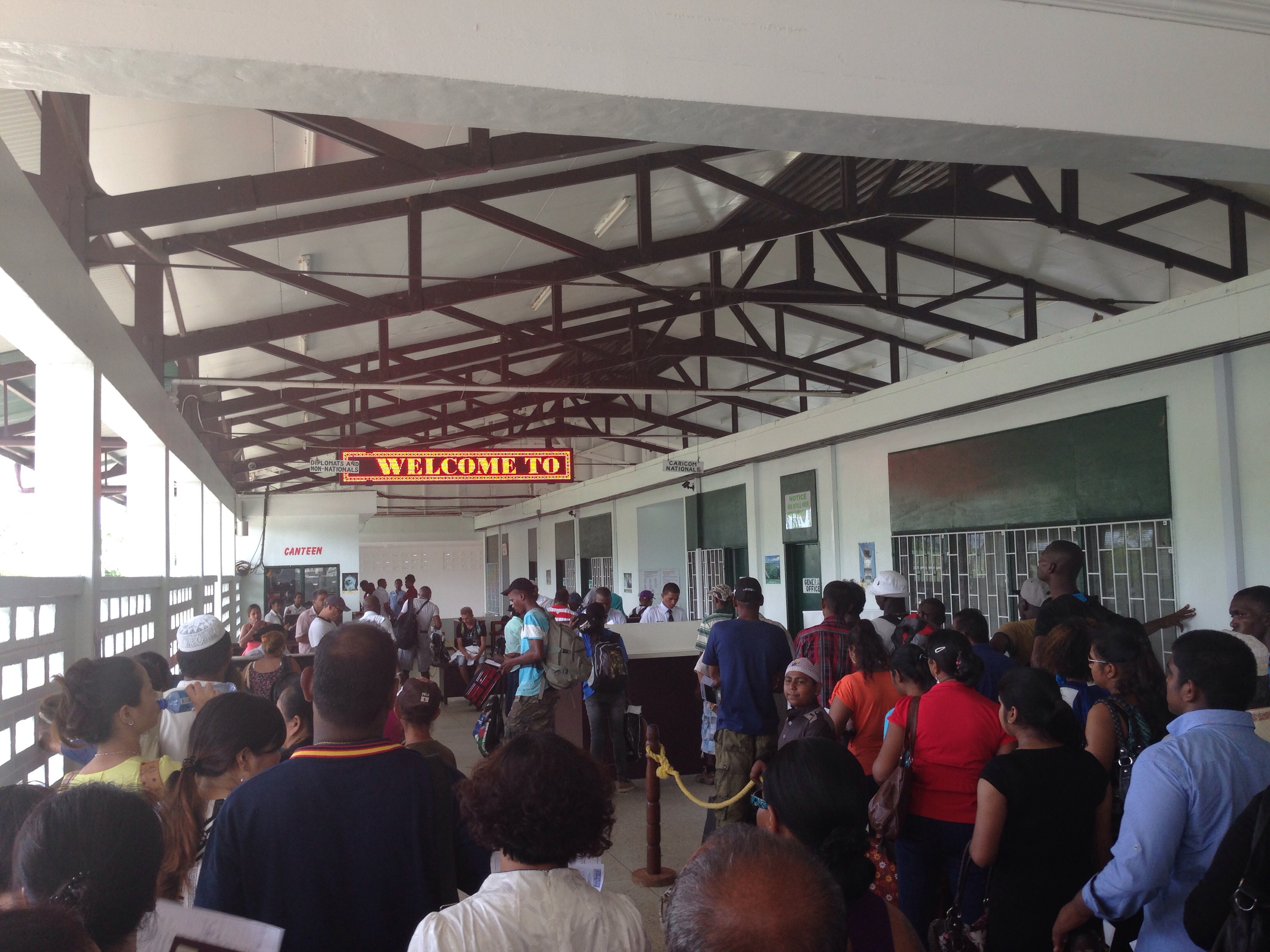 Agathe and I being hardcore :)I have been somewhat nervous about traveling in Venezuela. A long time ago I heard the first warnings and the media did a good job in making it look chaotic and life threatening. I have heard other warnings from various travelers and eventually I met a guy from Israel who more or less promised me that entering Venezuela would be equal to certain death!! I have not been able to find any reliable sources that could either confirm or debunk the stories so I entered the country with caution. 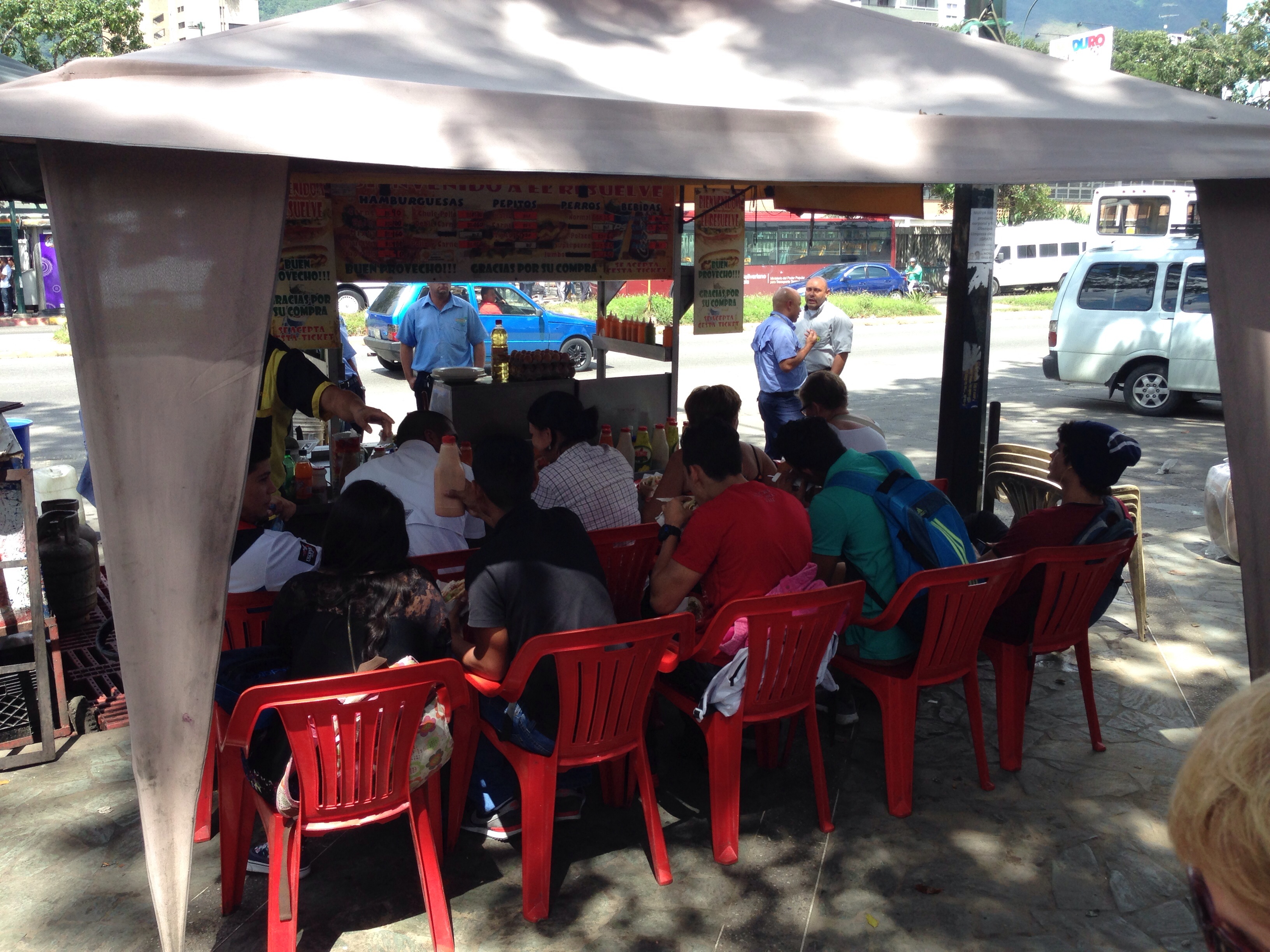 Making the most of a tiny space.I met two Venezuelan dentists on the bus and they where overwhelmingly friendly and helpful and even offered me a meal at one of the bus stops. But they also told me not to trust anyone and to be very careful. The bus eventually arrived to Puerto la Cruz where I had some waiting time so I went for a walk. People smiled at me. The stores were open. There was life in the streets and all in all it did not look more or less threatening than many other places I had been to before I entered Venezuela. I sat for a while at the beautiful beach and looked at people jogging and ships in the horizon. Four policemen on horses came to ask me a few questions about who I was and then they continued down the beach. A jogger stopped to tell me that this place was not a good place. However I had just spent a few hours in the sand enjoying the calm whisper of the ocean? I did not ignore the jogger and continued into the city and had some lunch. While walking down the street a small old woman about half my size looked up at me with joy in her face and asked: "where are you from?". As I replied "Denmark" she immediately started speaking a mix of Danish, German, English and what have you. I understood that she had a friend in Denmark that she had never met but that they spoke on the phone and wrote each other. And she was very sad that I was on my way because she wanted to cook me some local food :) 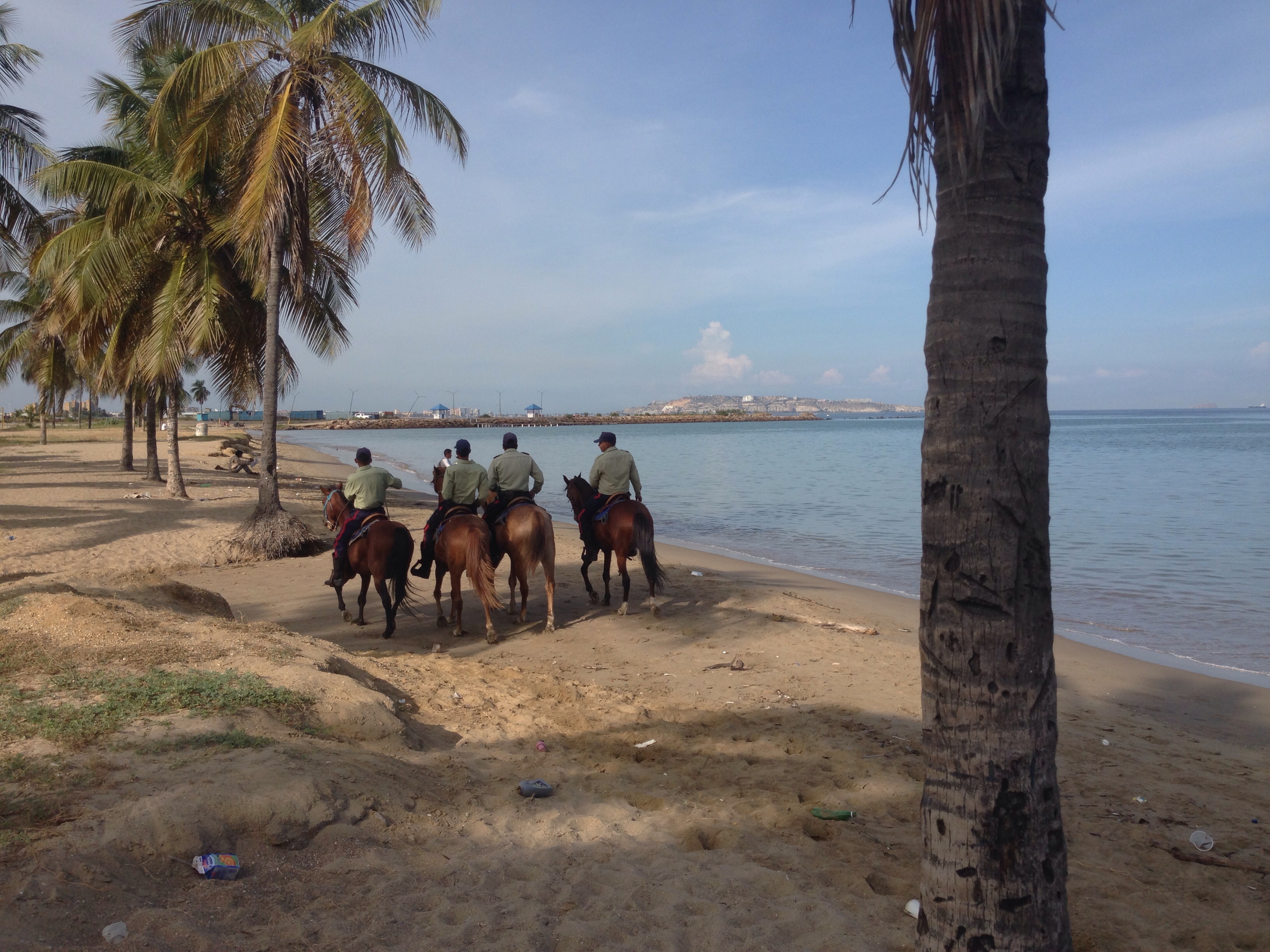 A bus later and I had arrived to the terminal in Caracas. The capital of this lethal country. Enter: dramatic music! I found the metro and continued towards downtown. Eventually I asked some metro staff for directions and one of them guided me by walking the entire 10 minutes with me to my hostel while explaining many things and among them how I couldn't walk around on my own and be safe. So I was really on guard however somewhat perplexed that everyone was so friendly and helpful in this dangerous habitat.In the hostel I met Gustavo who was born in Argentina of Italian parents and has made Venezuela his home many years ago. Multinational and always happy and smiling. As soon as he heard about the project he immediately gave me a 50% discount :) According to Gustavo all the rumors were off the charts and I had nothing to worry about. The city was safe and I should simply enjoy my time in Caracas. Mixed messages? I looked across the room and saw that he had placed a small Danish flag on the table :) 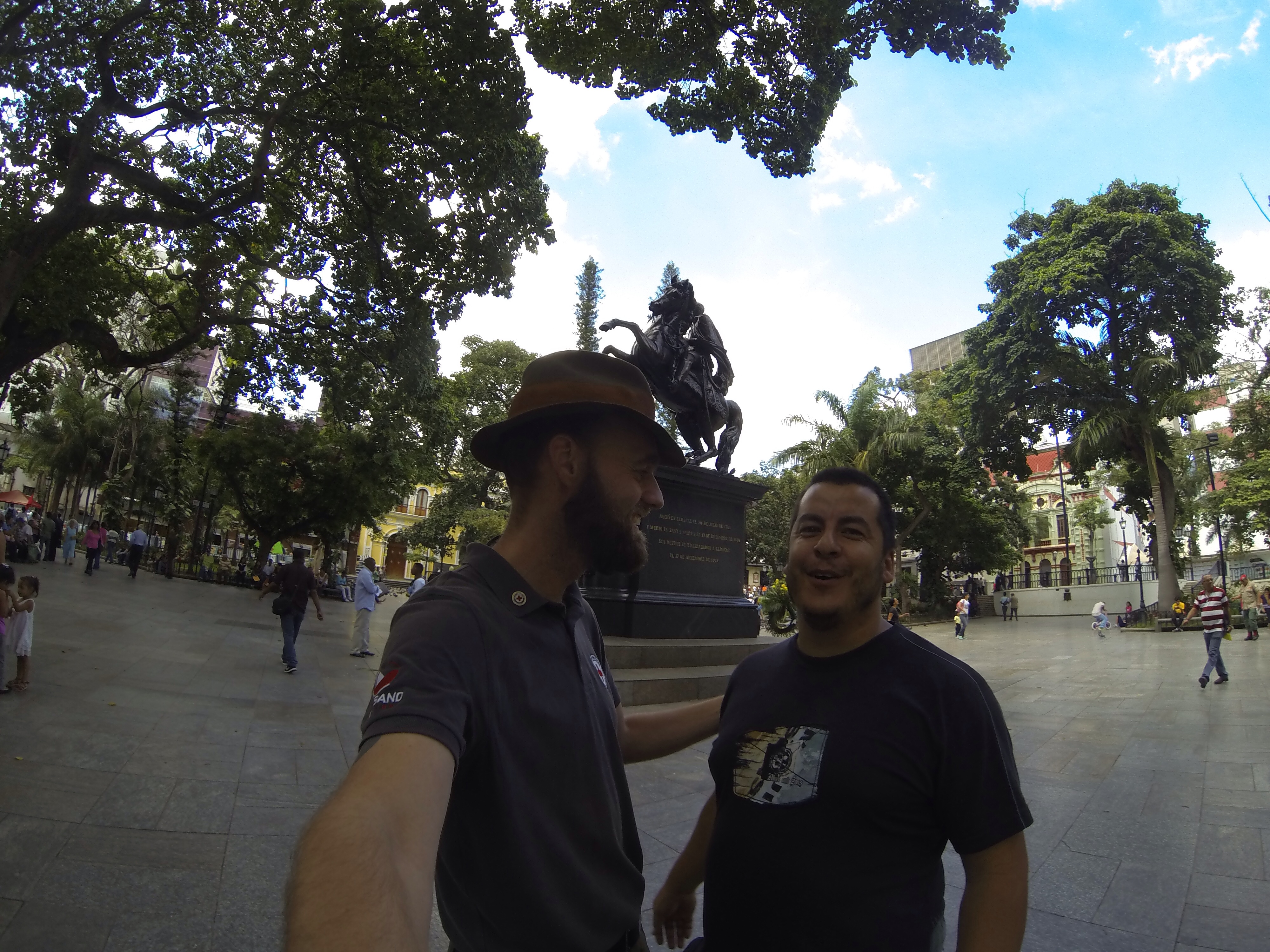 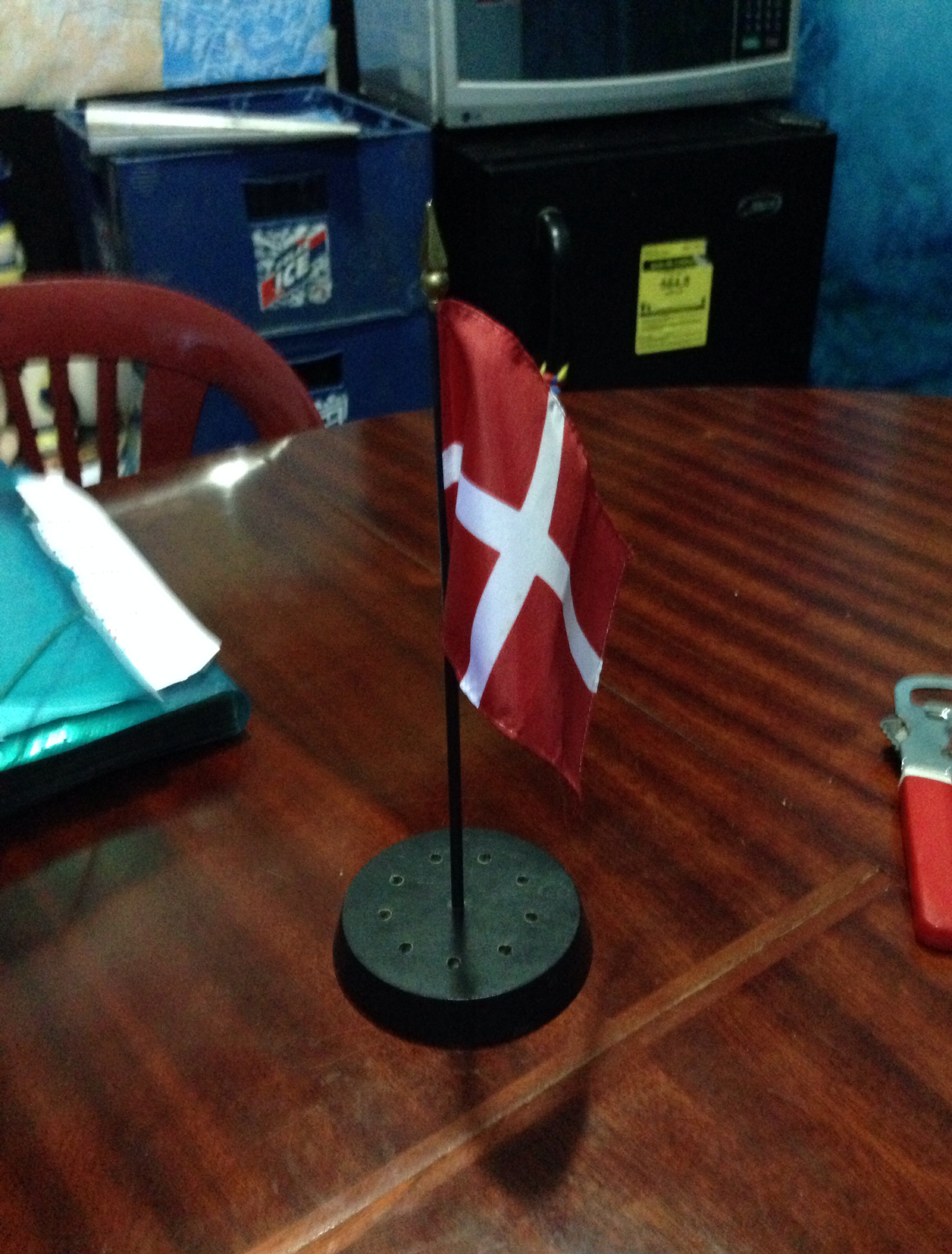 Gustavo understands the difference between a good hostel and a great hostel.Venezuela is by far one of the most breathtaking countries I have seen. And that comes from a person who has seen an enormous amount of beauty over the last 13 months. I can't say that Venezuela is the most beautiful country - but it absolutely speaks to me. Caracas is a big city with a lot of traffic. The historical center is spectacular!! The buildings are amazing, the parks are amazing and I sort of forgot to take pictures as I was so taken with enjoying it all. 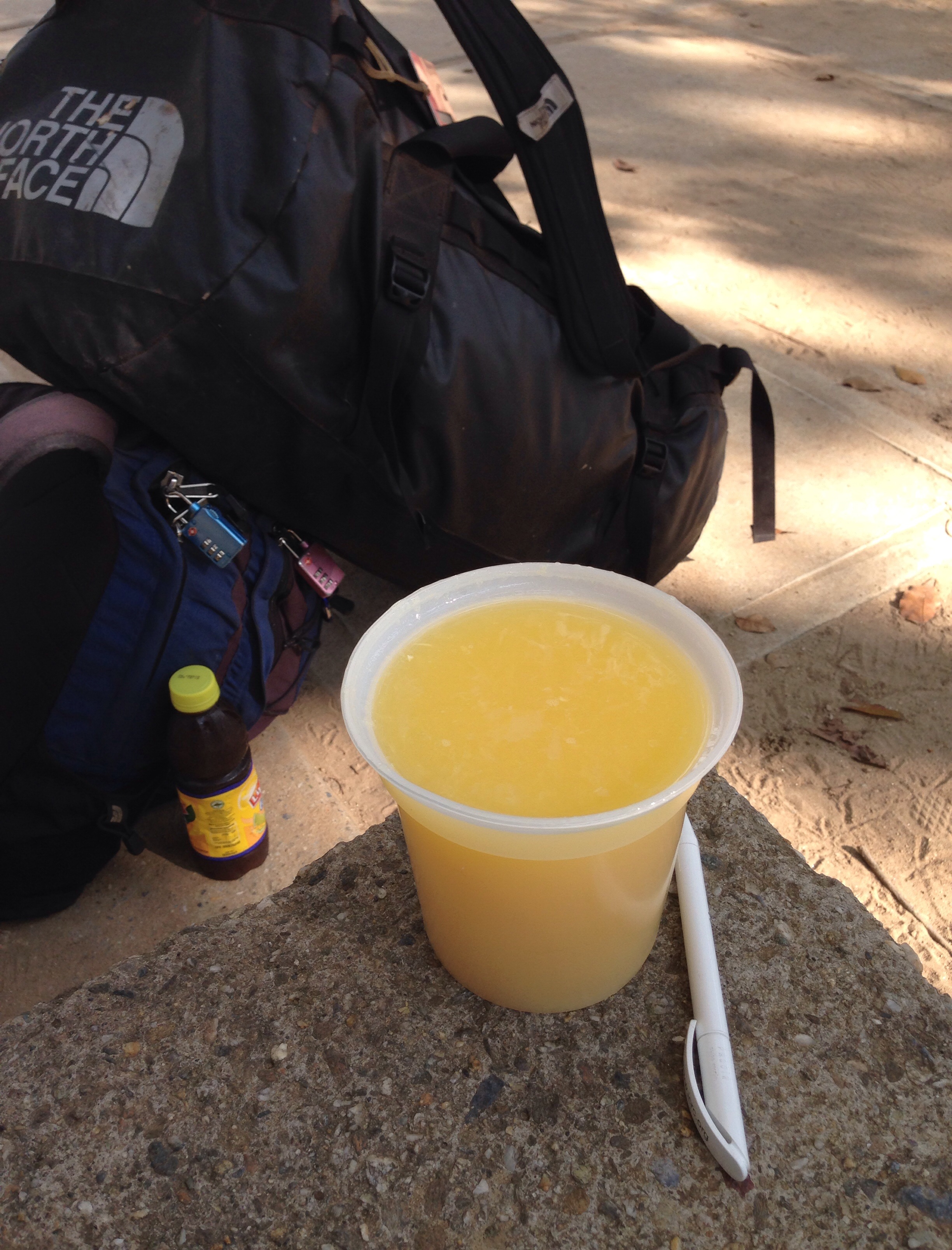 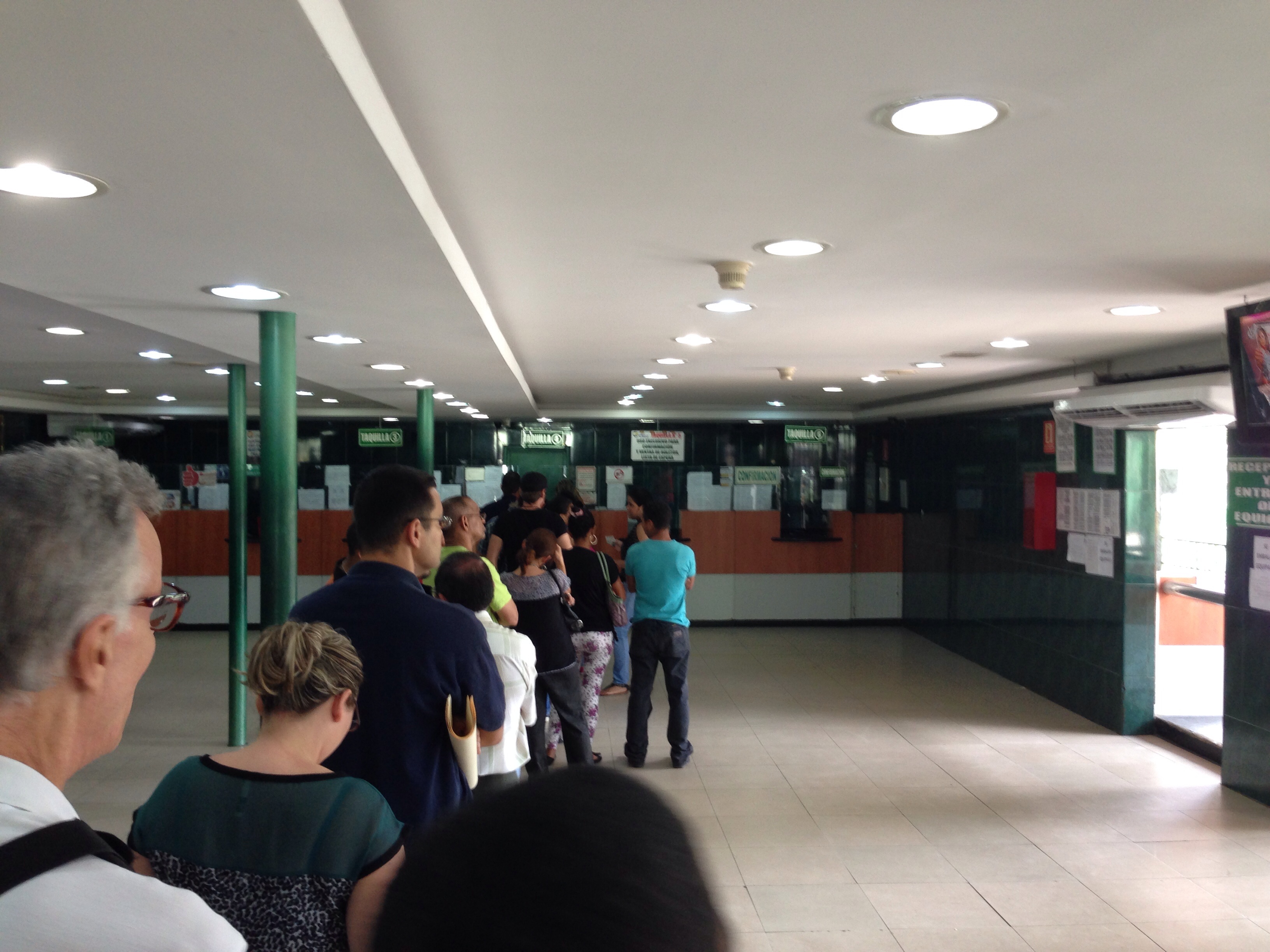 A huge cup of freshly squeezed juice was super cheap but I had to stand in line for an hour to get my bus ticket.There is political unrest in Venezuela and violence has reportedly increased all over the country. And this is certainly true. But it is not chaotic. I saw people standing in long lines for basic goods like flour or milk. But most things were plentiful. I couldn't use my credit cards in any banks. But there exists a black market for selling US Dollars which offers you are very high rate (which mostly indicates that there is no real trust in the local currency). It really stretches your money and makes your visit extraordinary cheap. The military is visible in the local landscape but are peaceful and friendly. Having said that I saw families walking about with young children in the streets. Shops and stores were open. People were smiling, laughing and relaxed to look at. The parks and plazas were full of people going on about with their life and I never saw anything threatening or unpleasant. It was simply a pleasure to be in Caracas and I wish I had more time there. 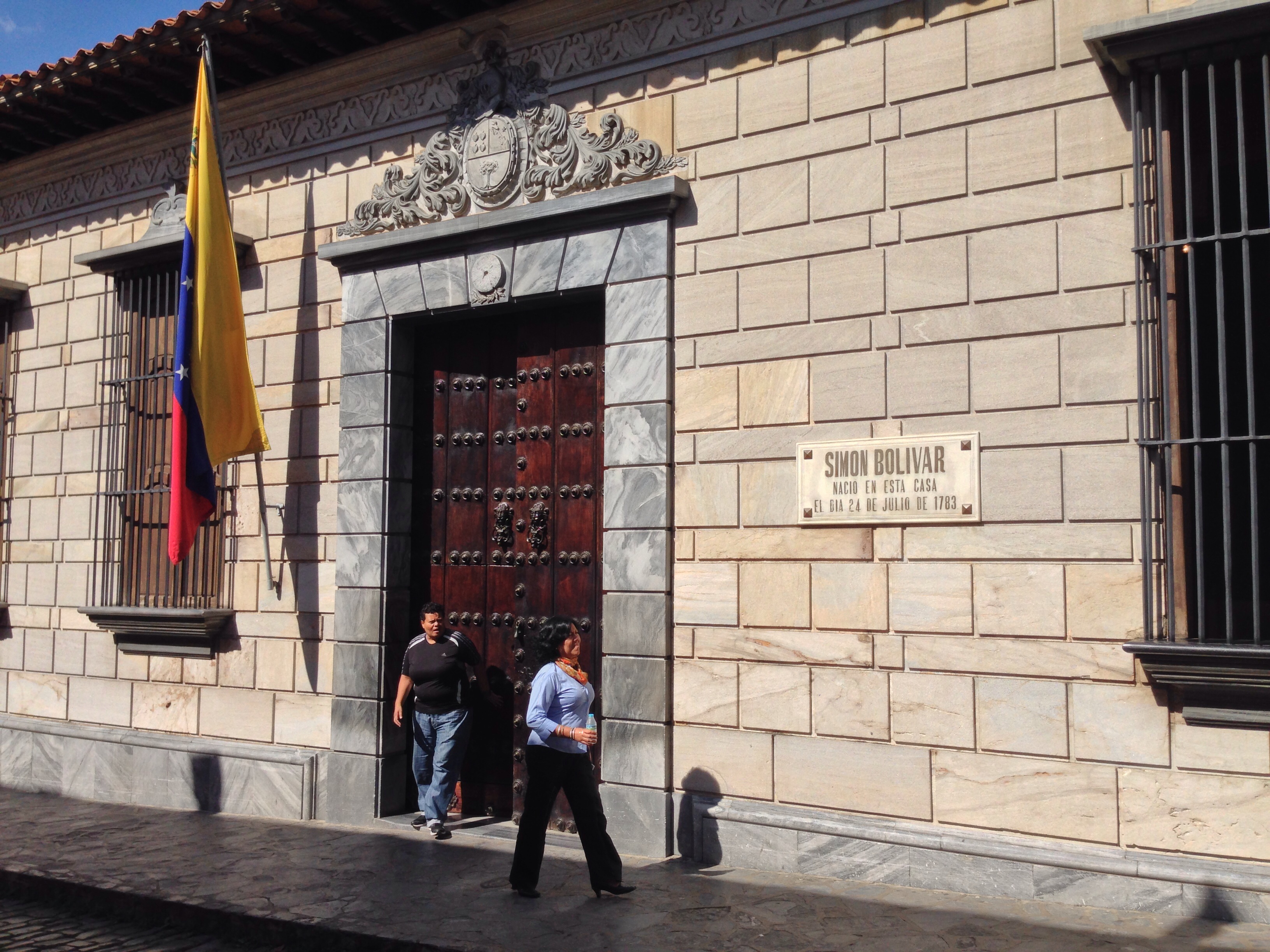 You can't really mention Venezuela without mentioning Simon Bolivar. So here is a picture of his house.

Here is a small anecdote for you: I spotted a small colorful plastic box on a handbag and asked the woman what it was? I was very alert so I anticipated that the answer would be pepper spray or an alarm button for self defense. The answer was: "it is hand sanitizer gel". 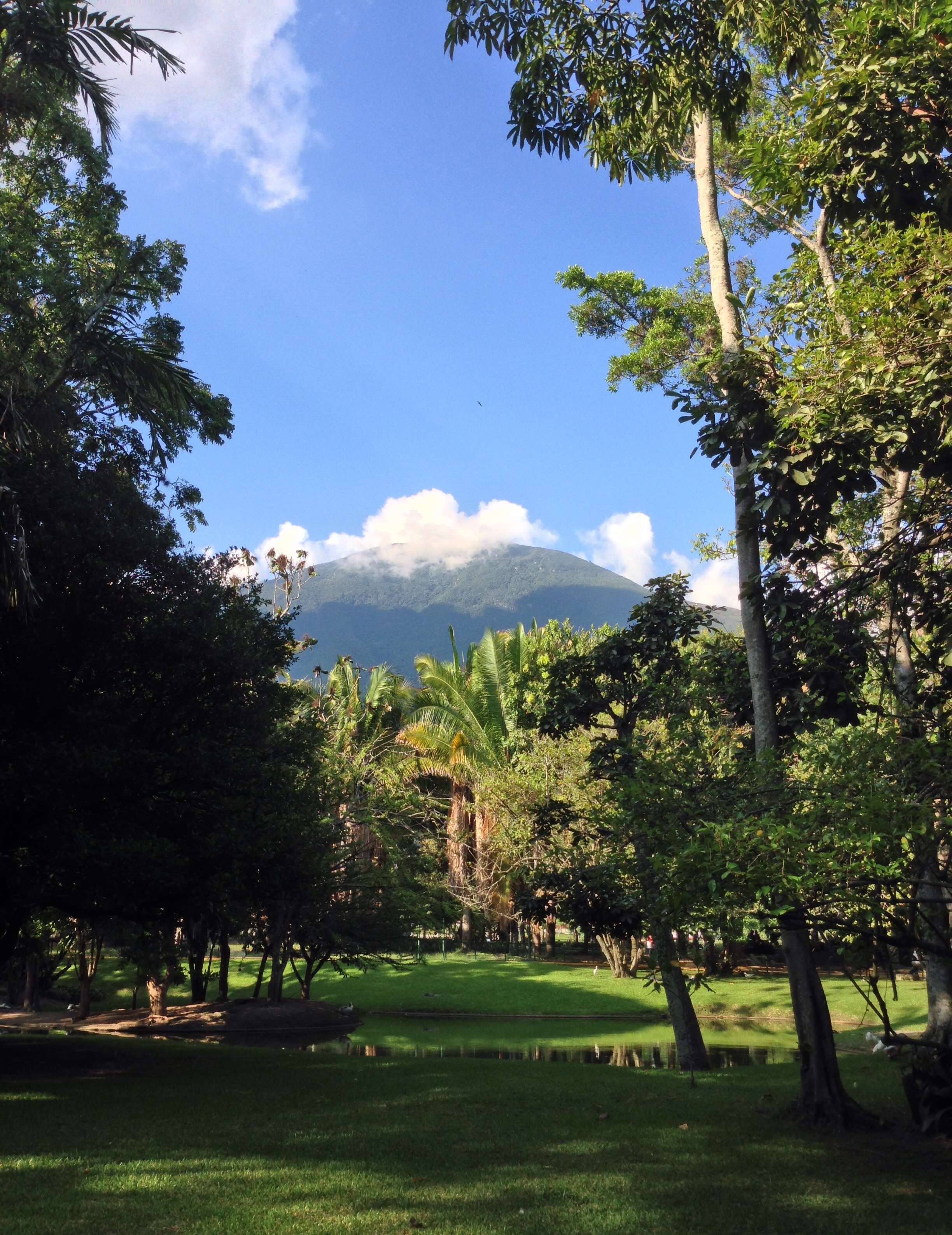 On the day I left I was sitting in a park looking at people. The park itself was phenomenal with a huge variety of trees. The weather was perfect and I could see the towering mountains in between the treetops on both sides of me. To the left a group of young men were practicing the art of flair. You know, the way a bartender juggles with bottles like Tom Cruise in Cocktail. To the center a group of young people were practicing acrobatic gymnastics like multiple backflips and other impressive stuff. To my right I could see a young couple practising ballroom dancing. And in the background a group of young men were practicing parkour. Of course in the middle of all this people were texting messages, holding hands, reading books or sleeping in the shade. I can't help tthinking how different my life would have been had I been raised here. 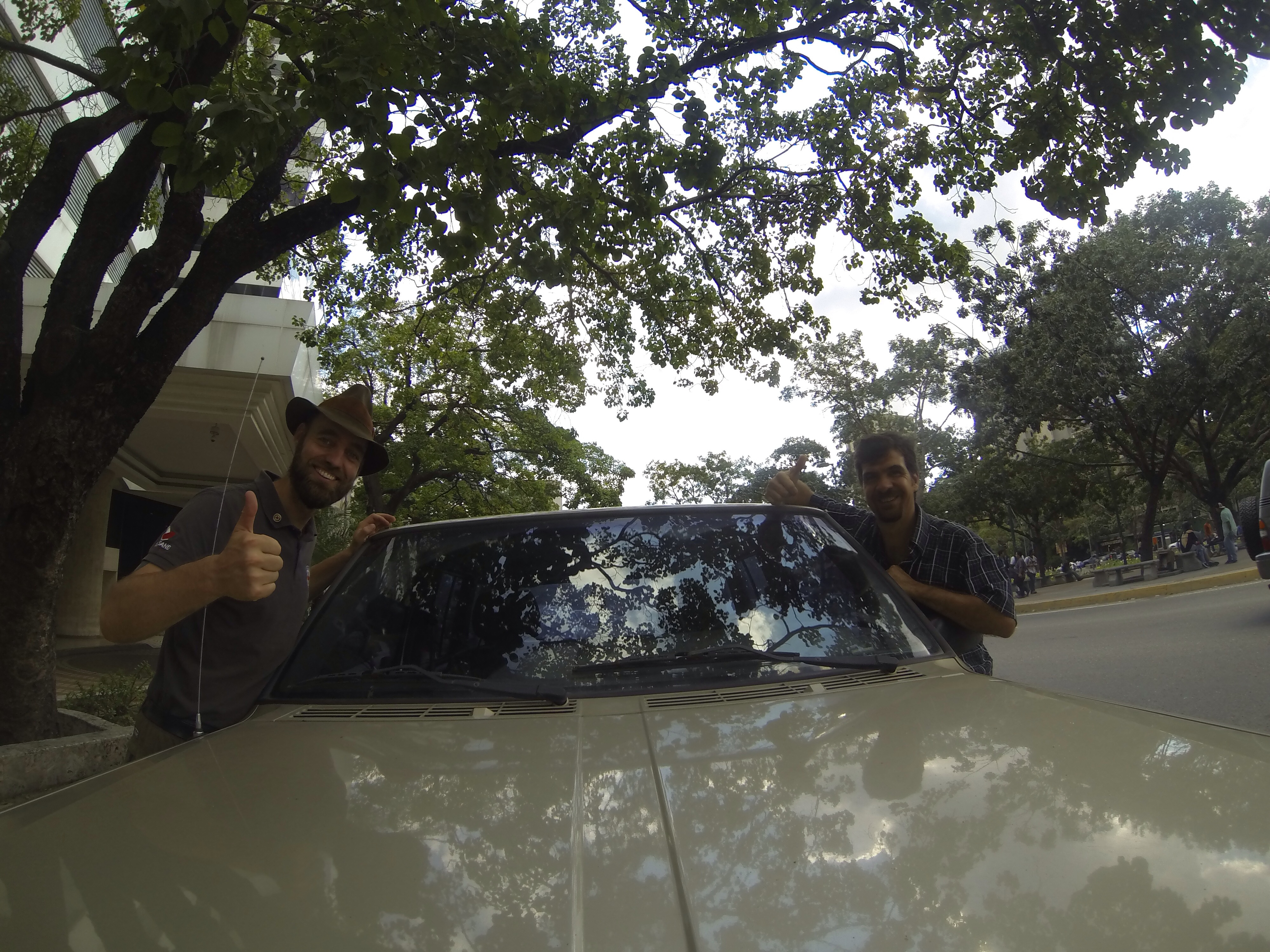 Gabriel just happened to be heading my direction and offered me a lift through the city?  :)

A bus got me back to Puerto la Cruz, another bus got me to Carúpano and a public taxi got me to Güiria. That was a taxi ride together with a few locals and Luis the driver who stopped at the roadside so we could all have a cold coconut - his treat :) In Güiria I learned that there no longer exists any ferry service to Trinidad & Tobago but Luis the taxi driver helped me investigate further and we eventually found the owner of a fishing boat who might be able to help. They asked me to show up again at their office in the late afternoon. Okay? Luis the taxi driver took off after helping me find a suitable hotel at a low price and I took an afternoon nap. Around 3pm I woke as someone was knocking on the door. A guy named Simon had learned that I was seeking passage to Trinidad & Tobago and he could help. Okay? So I trusted Simon and he took me around for all the formalities which included official paperwork and my exit stamp from immigration. That exit stamp was obtained after we picked up a lady at her home and drove her to an office where she stamped the passport and then we took her back home again :) then he brought me back to the hotel and told me to be ready the next day at 06:00am. 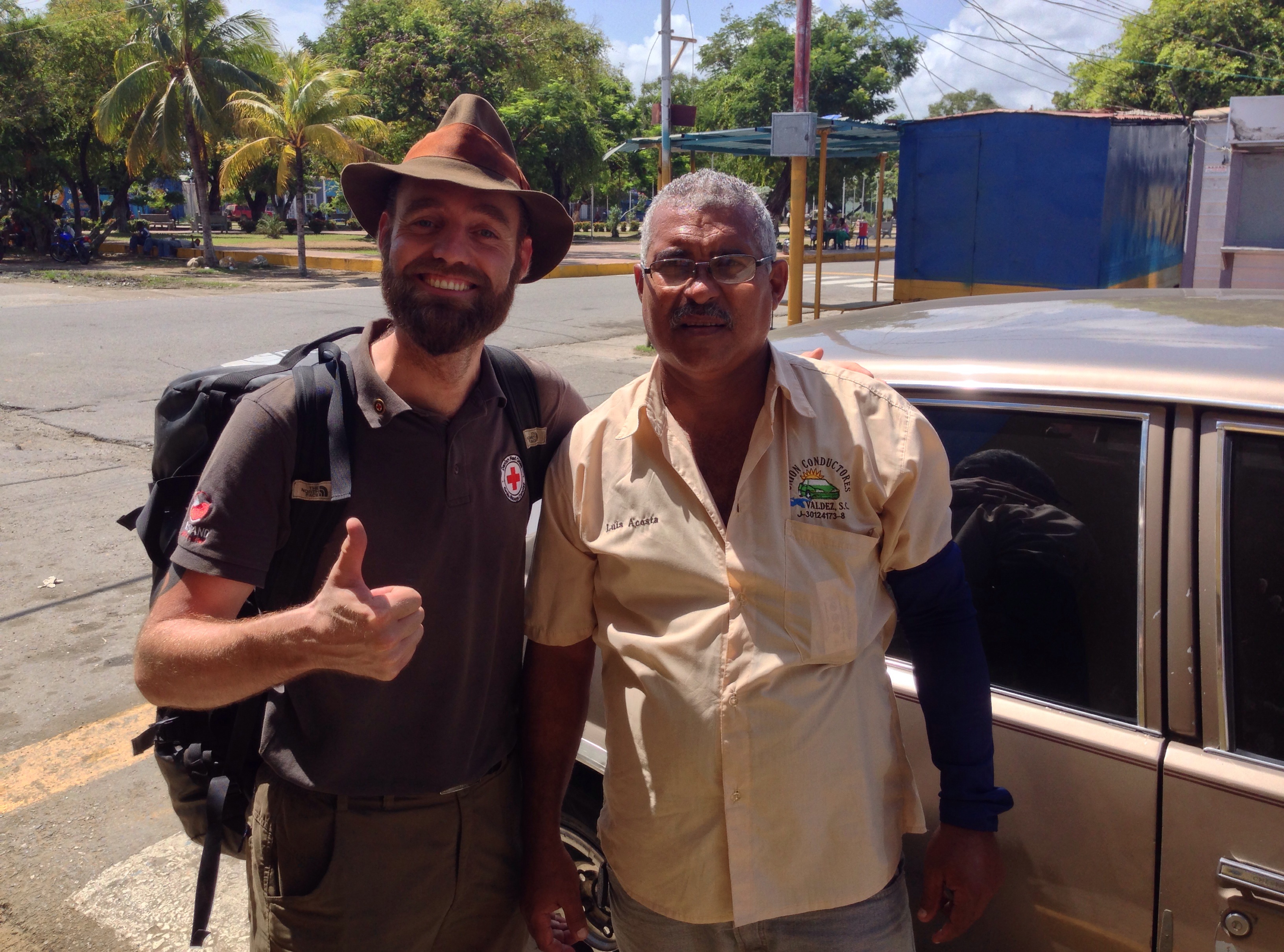 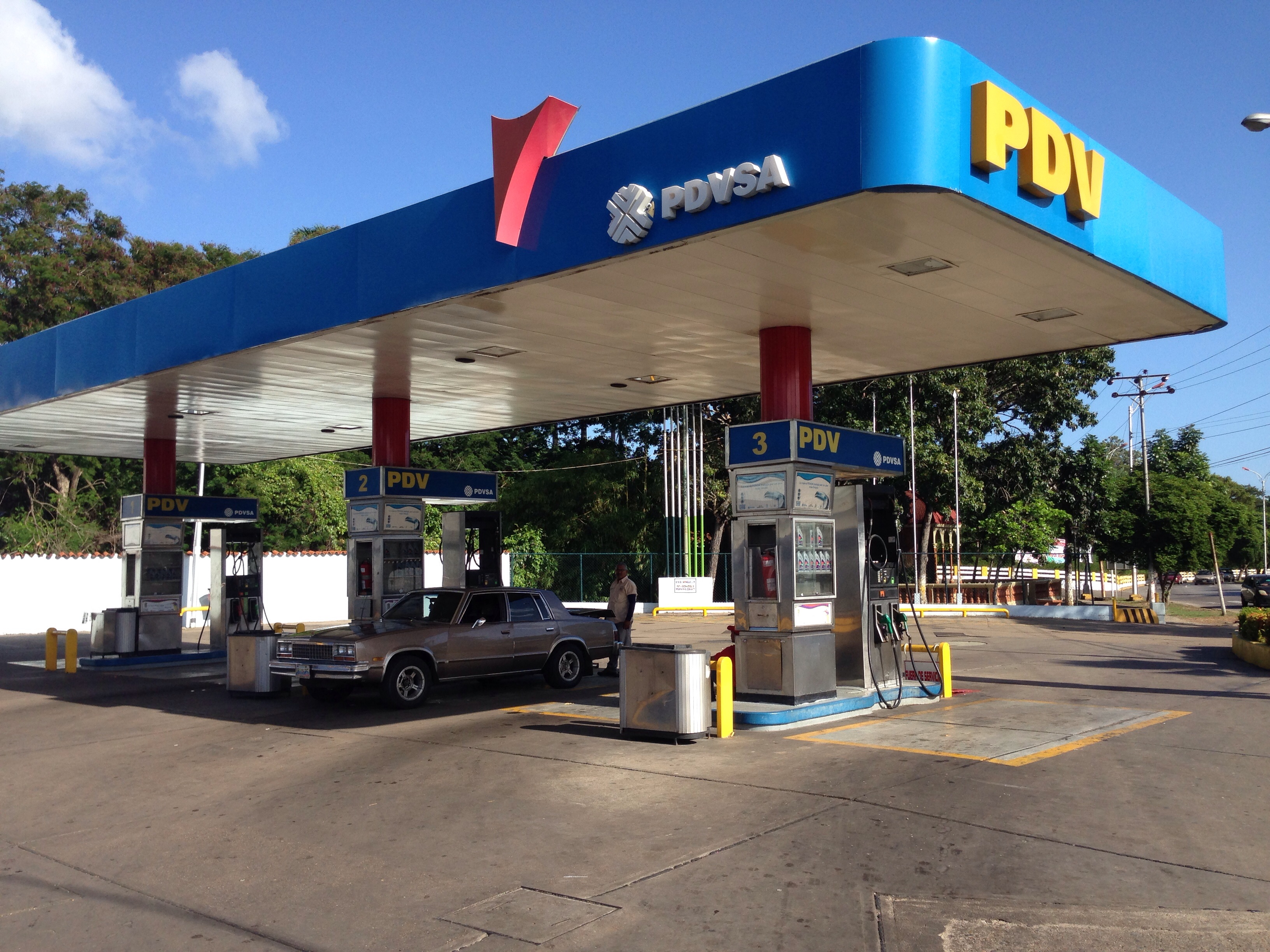 Simon was punctual which is not something I have grown accustomed to in South America. Nevertheless he was ready at 06:00am to take me to the boat. A small open boat awaited us at the port. A boat that is normally used for fishing. Simon, the captain and I got onboard and slowly left Venezuela. As we made it further into the sea it dawned on me how small the boat was and how big the sea was. But the captain kept the speed and direction steady and soon Trinidad appeared in the horizon as the sun climbed higher up towards the sky.And the rest of the story will have to wait until next Friday ;) 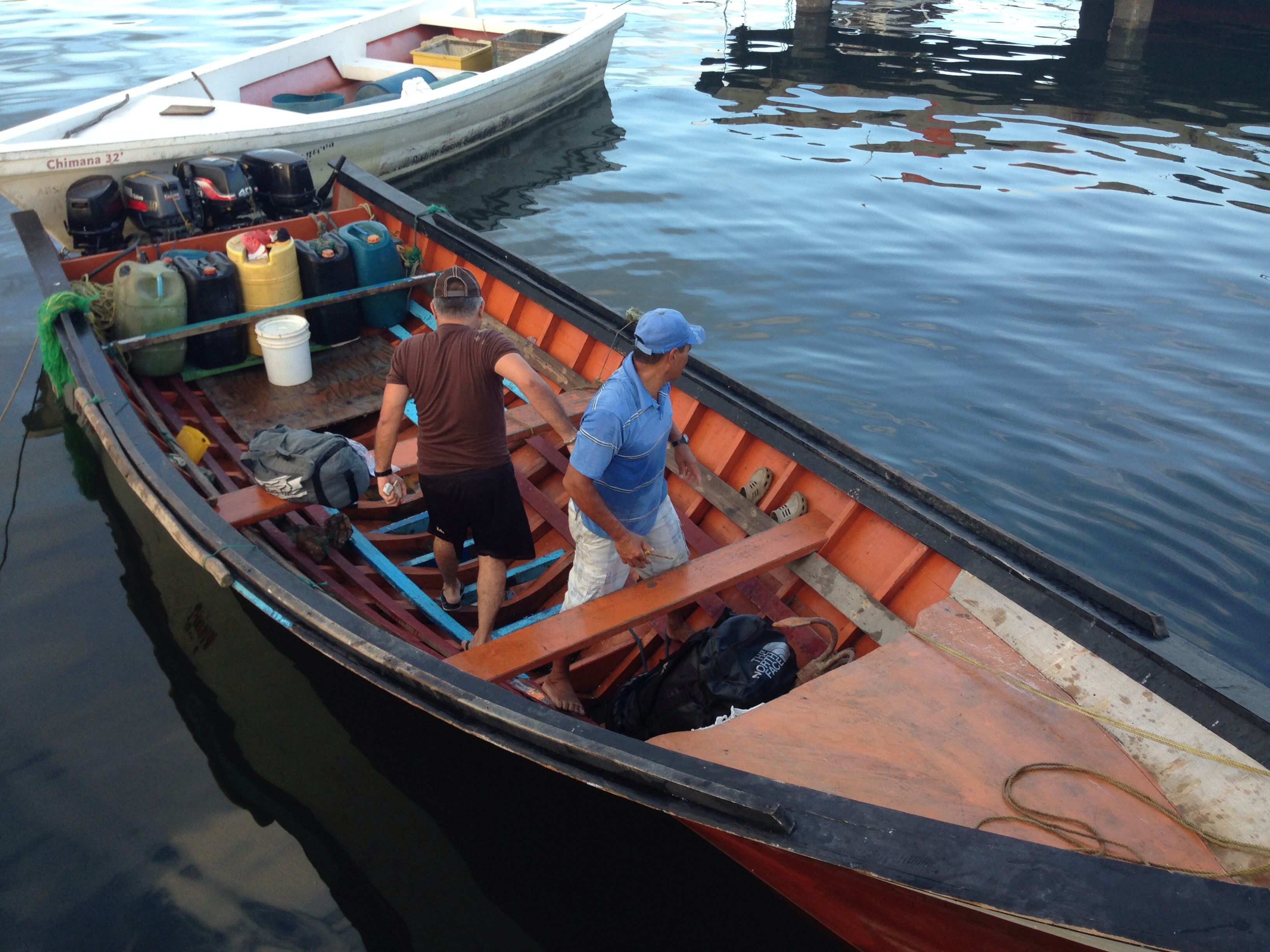 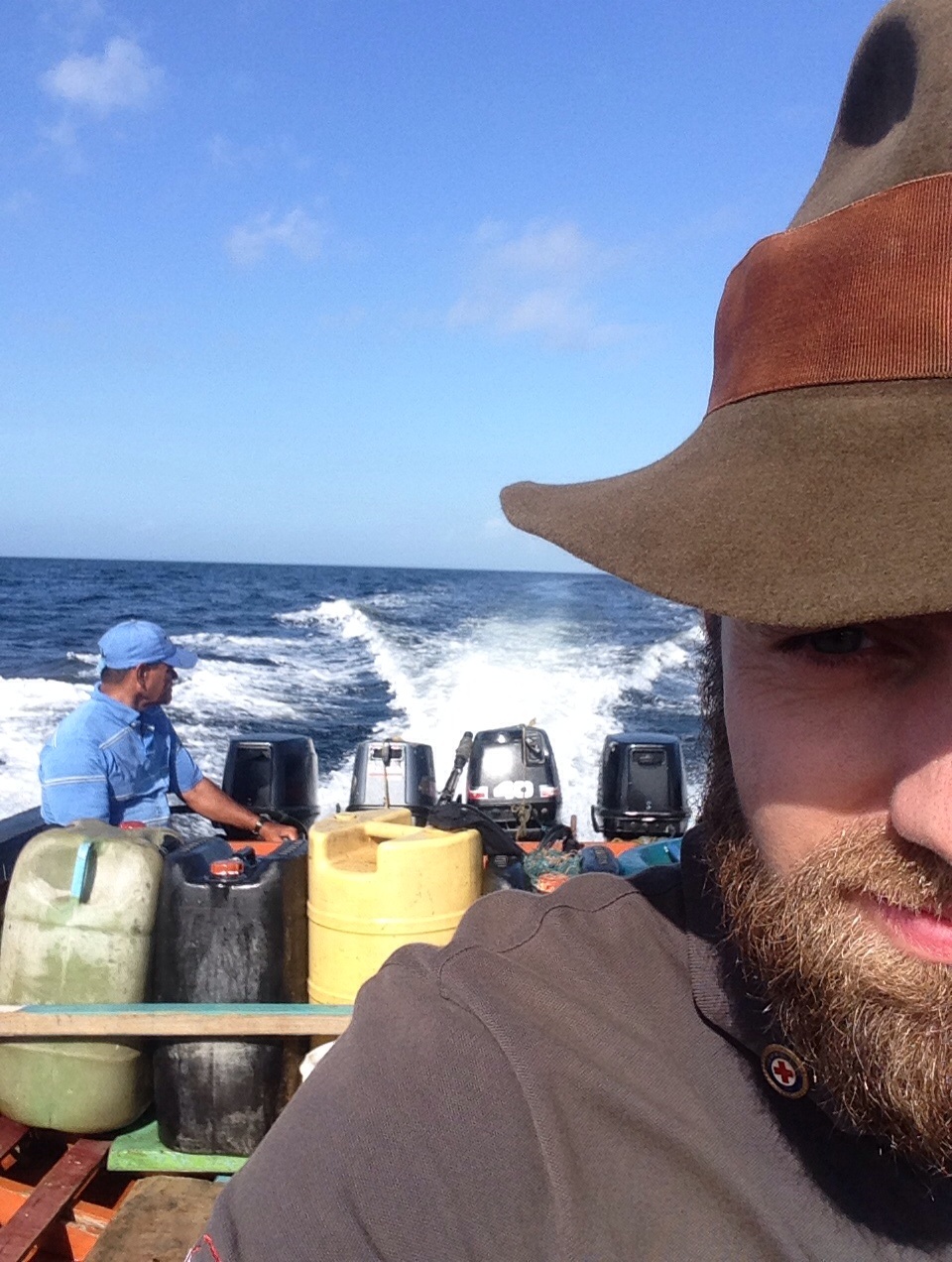 Best regardsTorbjørn C. Pedersen (Thor) - learning more about the world than I ever thought I would.