Out of Barbados and back to Saint Vincent - but frustrated

The human mind is an amazing instrument. It can block out everything around you no matter what it may be so you can feel exactly what you want to.

With people tuning into this project from nearly 90 different countries I cannot guess where you are right now or how the climate is. But back home in Denmark it's dark and cold. So many would dream themselves away to the beautiful tropical islands that I am currently traveling between. The clear warm water. The coconut water with rom. The white or black beaches and the predictable sun.I'm however frustrated and slightly annoyed. I left Barbados which is more than 160km from St. Lucia in order to return to Saint Vincent which is less than 50km from St. Lucia. It made good sense to me. I believed that I would be able to make the transfer to St. Lucia on one vessel or the other. A few days ago when I arrived back to Kingstown 3 different boats went across to St. Lucia. The following day, Thursday, no boats. Friday; no boats...and this is the forecast until Tuesday next week. It means that I am stuck on a beautiful tropical island for another week before I can make it across and I'm sure you don't follow the problem right now because it must sound absurd to be frustrated about such a thing. 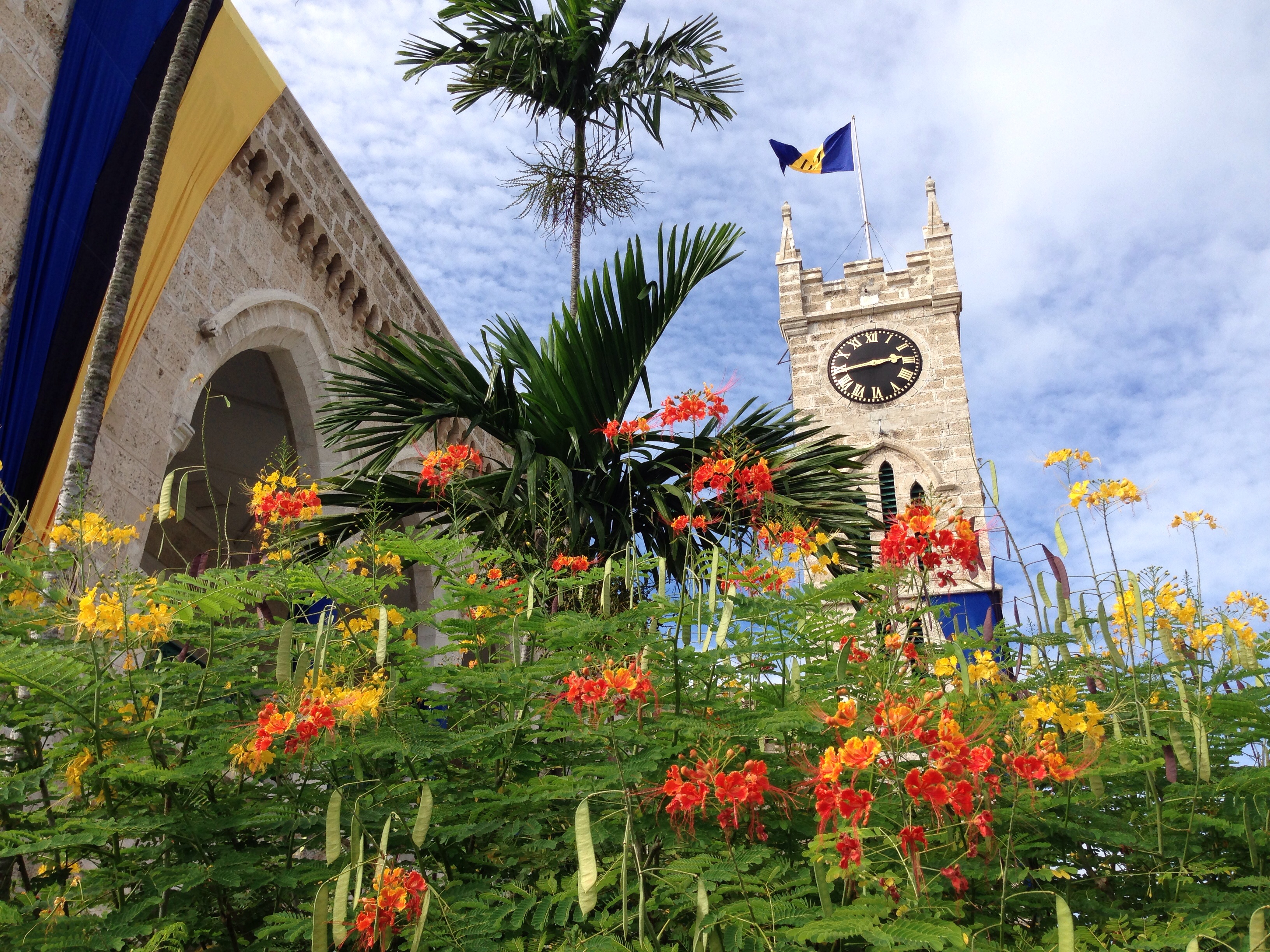 The national flower "Pride of Barbados" in front of Parliament.
I come from Denmark. We build bridges everywhere and I'm surprised we haven't made a tunnel or a bridge to the Caribbean yet. We have a bridge across to Sweden which is a country that has the same distance from Denmark as there is between Trinidad and Venezuela...and we are currently working on a connection to Germany. If there are no bridges then there are surely ferries. Not just within Denmark but certainly also to the nearby countries in all directions. What is wrong with the Caribbean?! Why are they not creating connections between each other? I blame it on warm countries in general. If you live in a cold country then you can't really put anything off until another day. You need to get things done as soon as possible or you loose your chance. Warm countries have it good...anything can be done later... 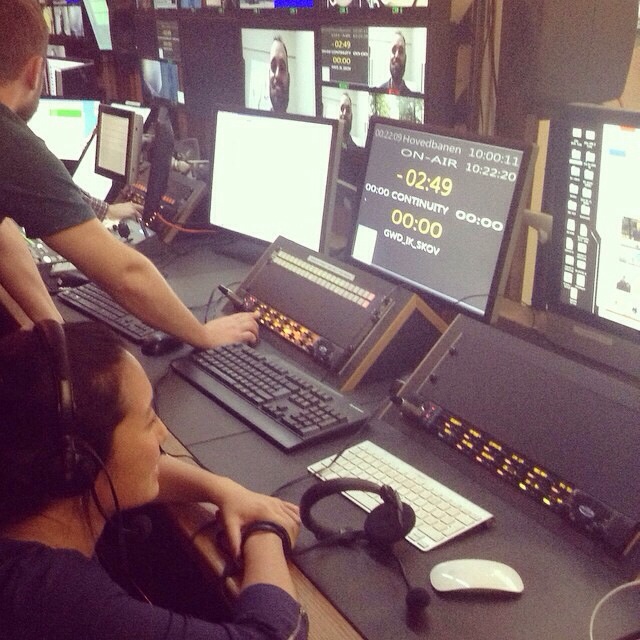 My girlfriend and I are in touch almost every day - and I miss her.Why so frustrated? Well, I'm traveling to 203 countries and I'm aiming at having that done within 4 years. That's what I told the sponsors and more importantly that's what I told my girlfriend. My girlfriend which by the way has booked her ticket to meet me in Bahamas in the last 2 weeks of January. I have reached 66 countries which means I'm still ahead of schedule. But in reality I will be spending much more time in other more difficult regions of the world so I need to have a head start. Between me and the Bahamas I have another 8 countries to visit. And I have less than 6 weeks to do that. So that really means that I'm short on time for the upcoming countries. And that's a real shame.

Perhaps being away from home for this long is also getting to me in some degree. Or perhaps it's simply the hardship in continuously meeting wonderful people which I want to spend more time with but constantly being in a situation needing to move on and move on and move on... 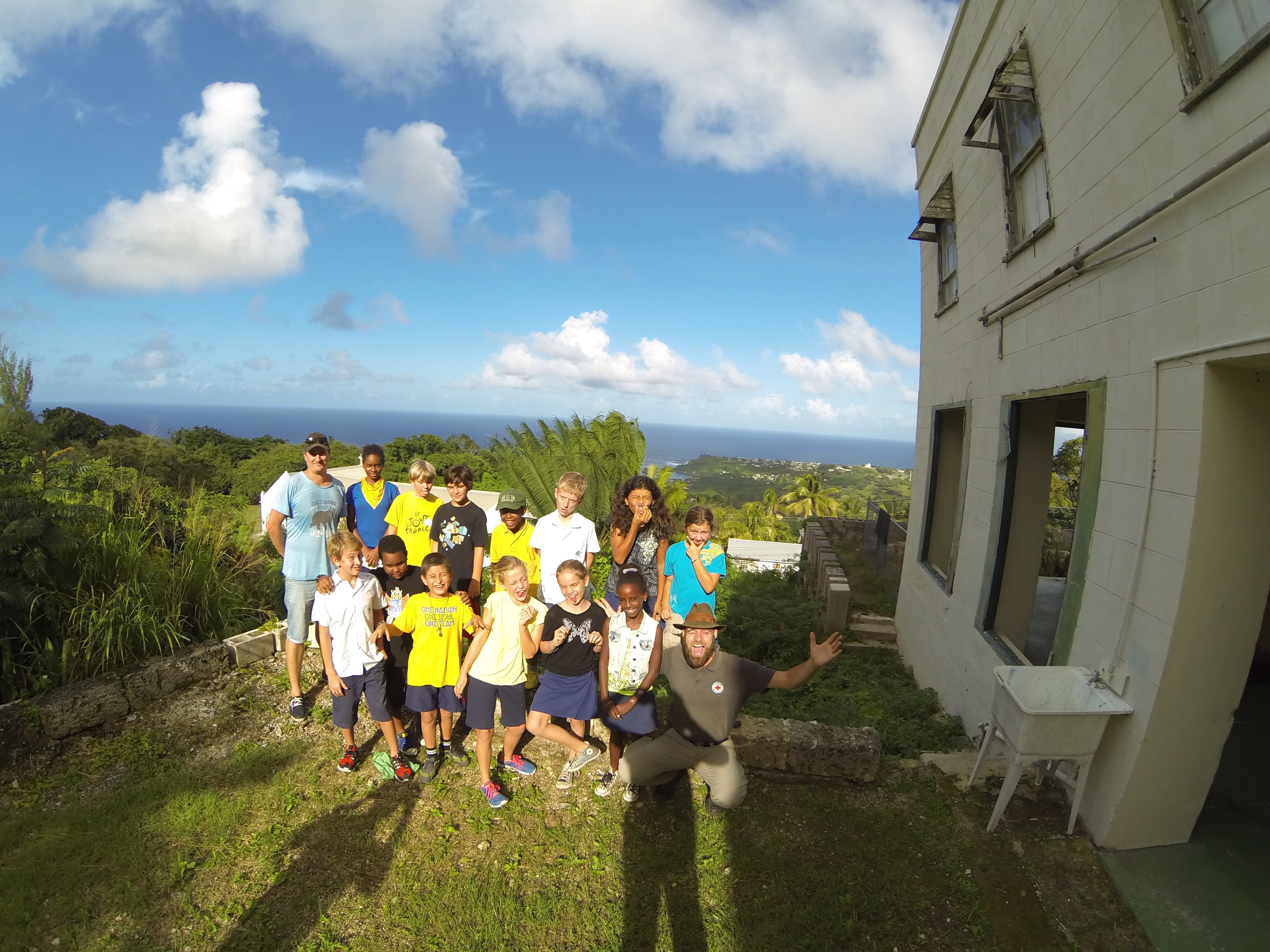 Some of the students at Codrington School. Making crazy faces with me :)My time in Barbados was wonderful. I had the pleasure of being invited to visit the Codrington School - an international school in Barbados which has around 180 students from 48 different countries. It was sort of a magical place in beautiful surroundings and it has exited there since 1917. Ryan Scott, an all round great personality, is a teacher at the school. Ryan is from New Zealand and has worked as a teacher in various countries before he landed in Barbados. It takes him 4 days to travel home to New Zealand from Barbados! 4 days!! That would essentially be 8 days of travel time which is a lot - especially if you only have 14 days of vacation. Anyway, Ryan invited me to come a speak with the students and it was great fun. I hadn't done that since I left Greenland. The best question came from a young boy who was fighting to keep his tired arm up in the air. When I finally let him ask his question he replied to me with an extraordinary poker face: "do you have a razor?". 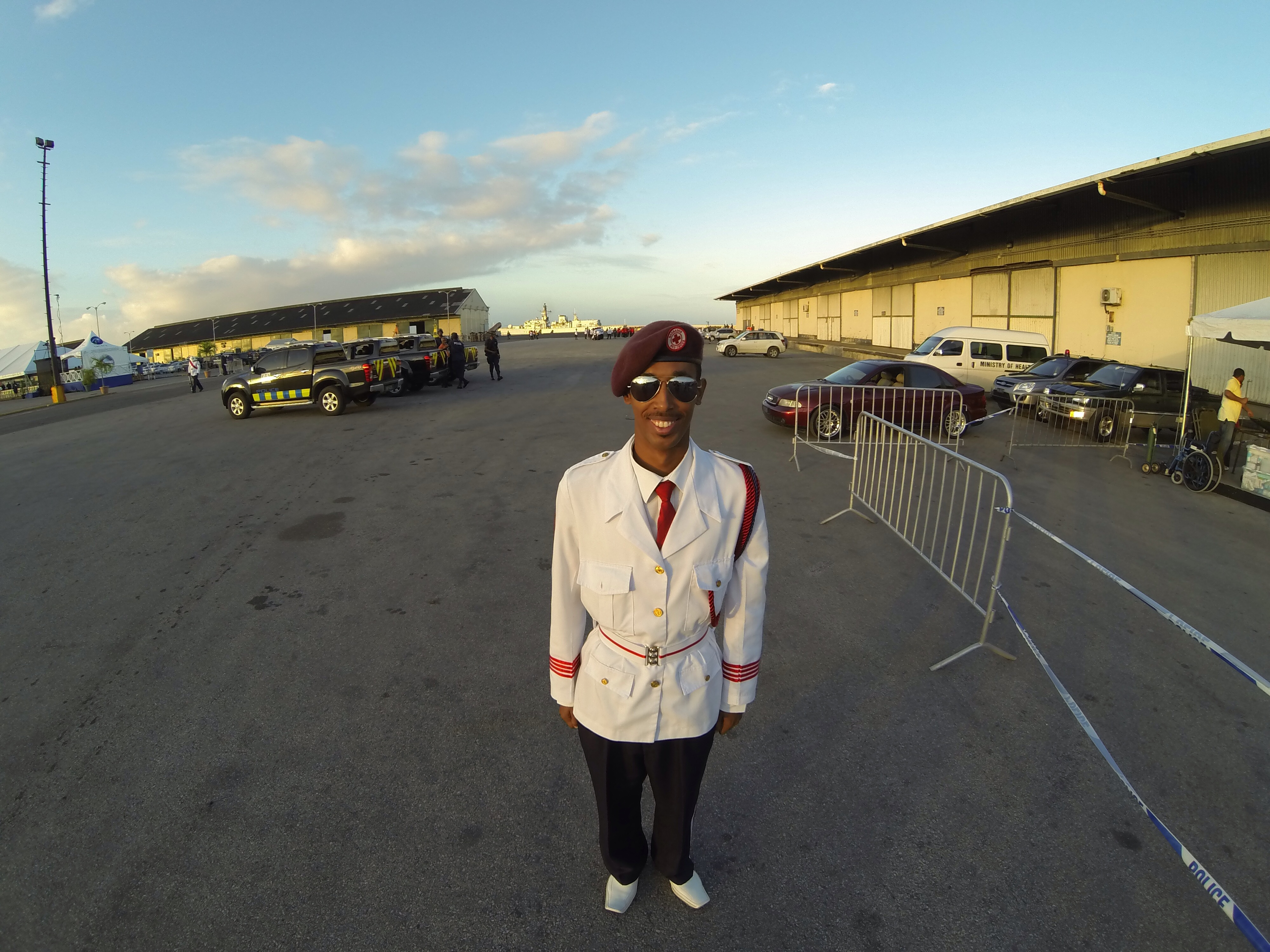 The Red Cross parade uniform. I never knew there was such a thing!As a journalist cleverly noted Barbados was my 66th country and the countries independence was achieved in 1966. Is that a coincidence or simply part of my master plan? Let's not try to answer that...but we could instead focus on that on December 1st Barbados celebrated its day of national independence and I was invited. I got to sit next to officers and officials alike as my title ranked me to be: Goodwill Ambassador on behalf of the Danish Red Cross. Ambassador of goodwill....goodwill to all! It's touching to see the pride of a country as it turns 48 years. I never gave that a thought before? What would it be like to come from a young nation? I suppose if I came from a country that turned 48 years then I would wave every flag I could find and jump around in pride and celebrate it with my friends! It was a nice parade which included basically anyone you could fit into a uniform. Even the prison guards were represented. And of course the Red Cross too. It was a very official event that took place after many hours of exercise and practice during the weeks and perhaps even months leading up to the event. It included horses, guns and state officials. 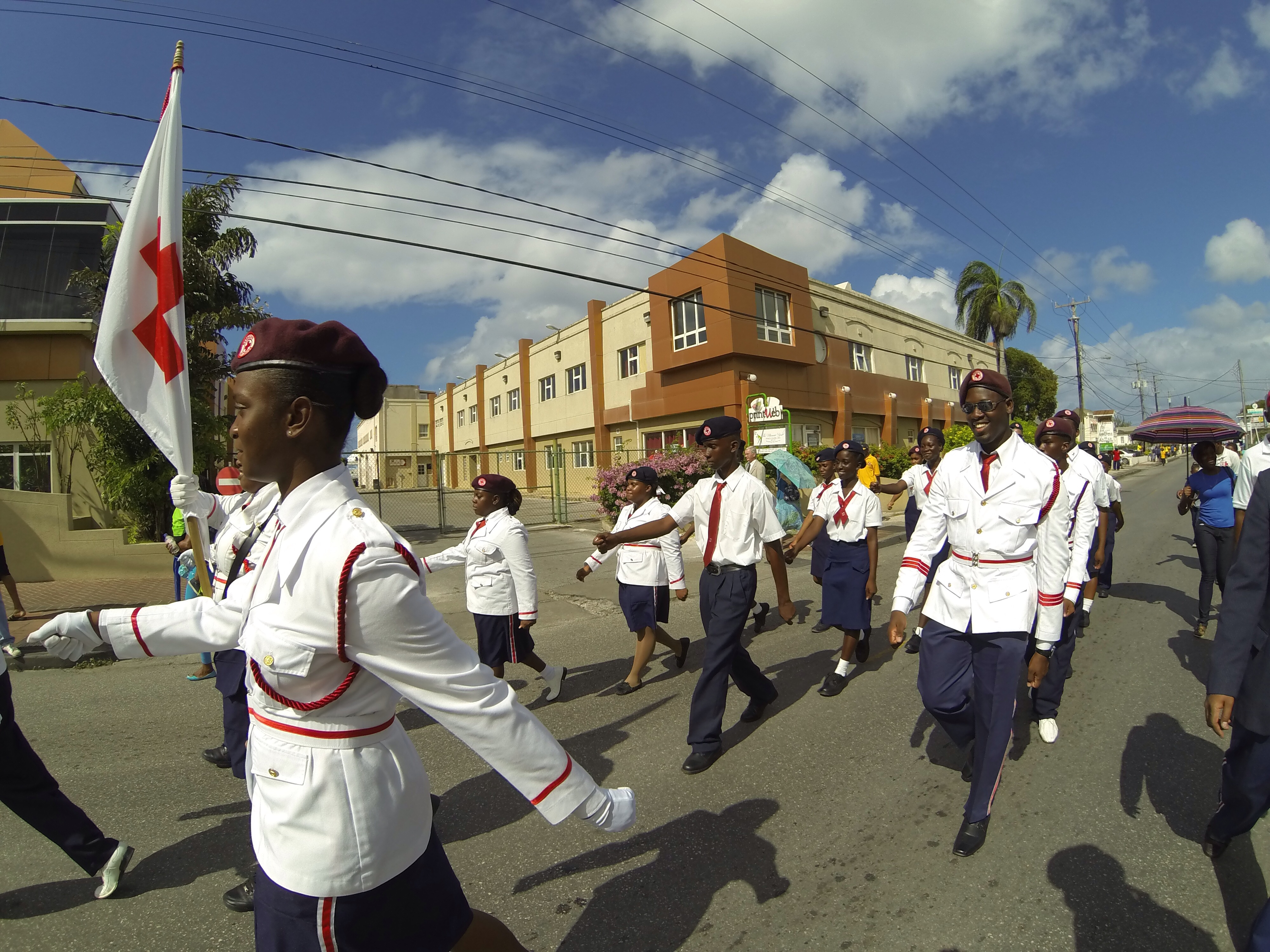 Marching through Bridgetown.The parade was followed by everyone marching into Bridgetown and, being a former soldier, I had several flashbacks during the day. I used to stand guard in front of the queens palace and we would march through the city every 3rd day. In some strange way the Red Cross youth in their white uniforms made me proud. Since then I've been researching Denmark's day of national independence and it turns out that we don't really have one. Apparently as we were into the "conquering other nations business" and not the other way around we have always had our independence. Sorry other countries. But well done on your independencies :) 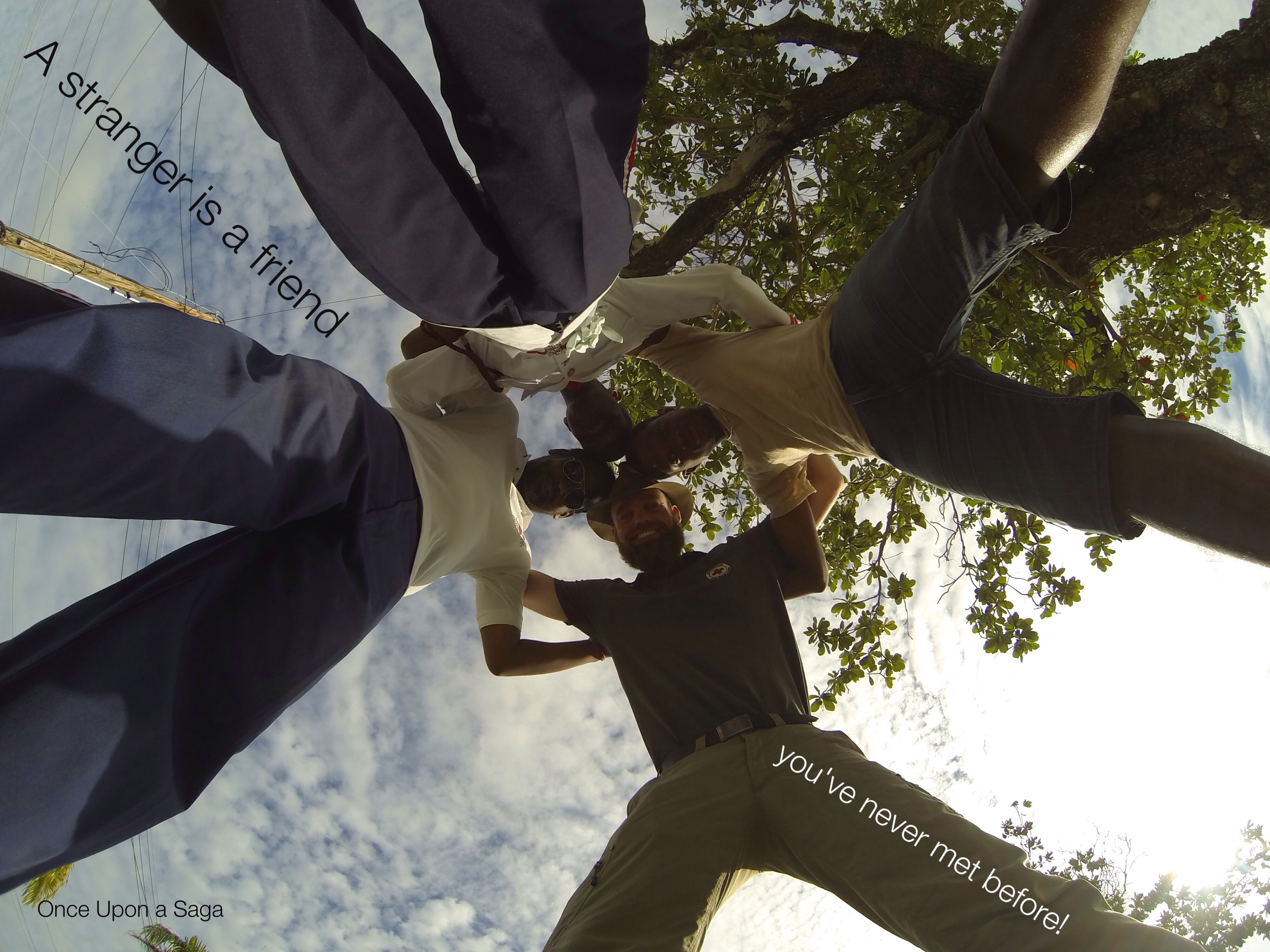 Peterson, Steven, Mark and I.It's hard saying goodbye all the time. And in reality I come from an area of Denmark where we never say goodbye. We say: "see you". So I said "see you" to Peterson, Mark and Steven who I had been spending day and night with throughout the week. I surely haven't seen Barbados. It is my opinion that there is so much more to see. The north has some spectacular nature which includes extraordinary cave formations. The diving is reportedly first class and Bridgetown alone is an explosion of history. But I have found something precious within the people I have met and I always like to have an excuse to return. 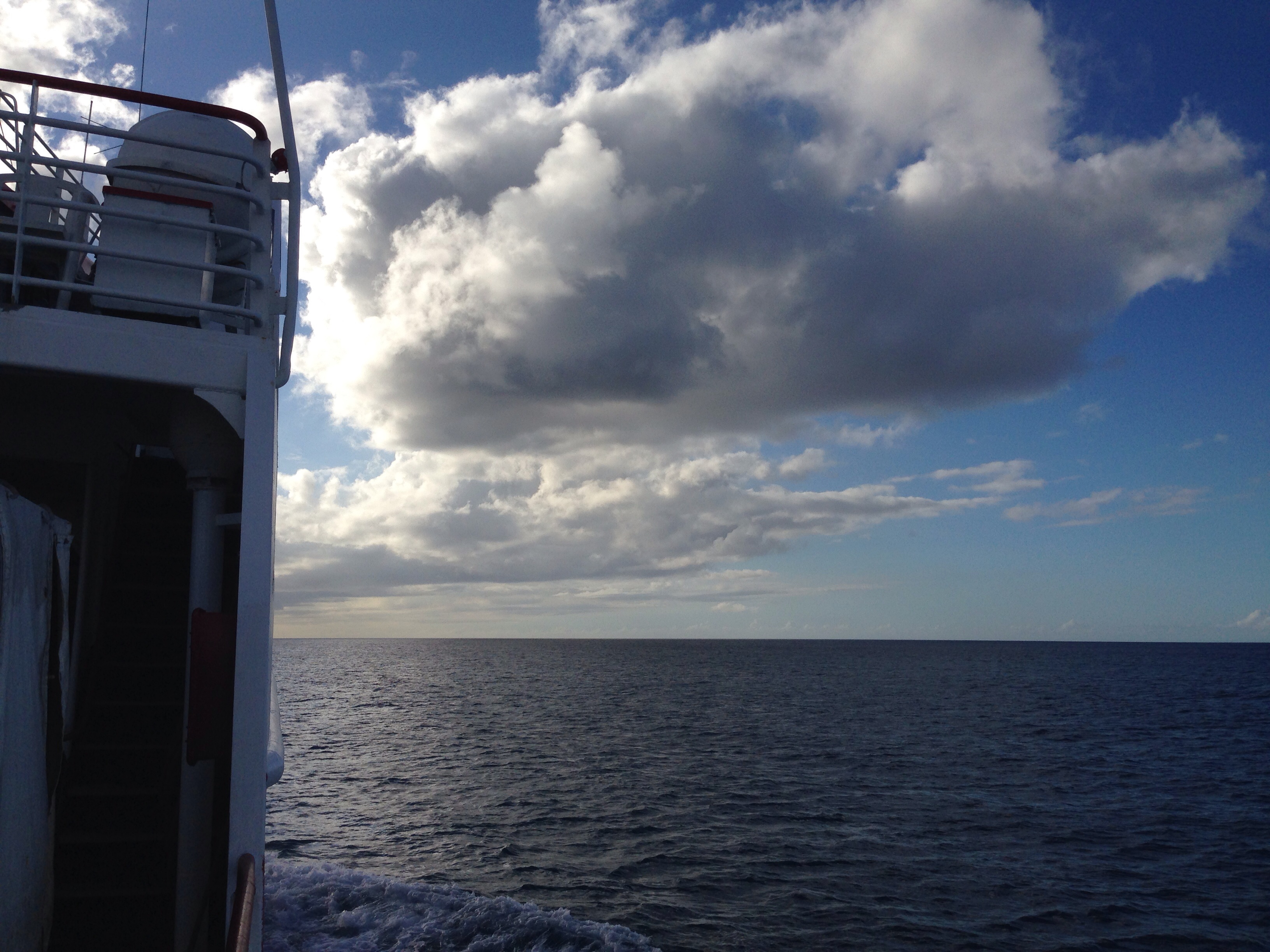 Leaving Barbados and heading towards SVG.The good ship: "Admiral Bay 2", which was the same freighter that brought me to Barbados, also became my vessel of departure. I was treated with kindness and curiosity onboard and soon arrived to Kingstown again. The ship is a old Norwegian passenger ship and it carried plantain (a kind of banana) to Barbados and returned with a bulk full of various snacks to Saint Vincent. 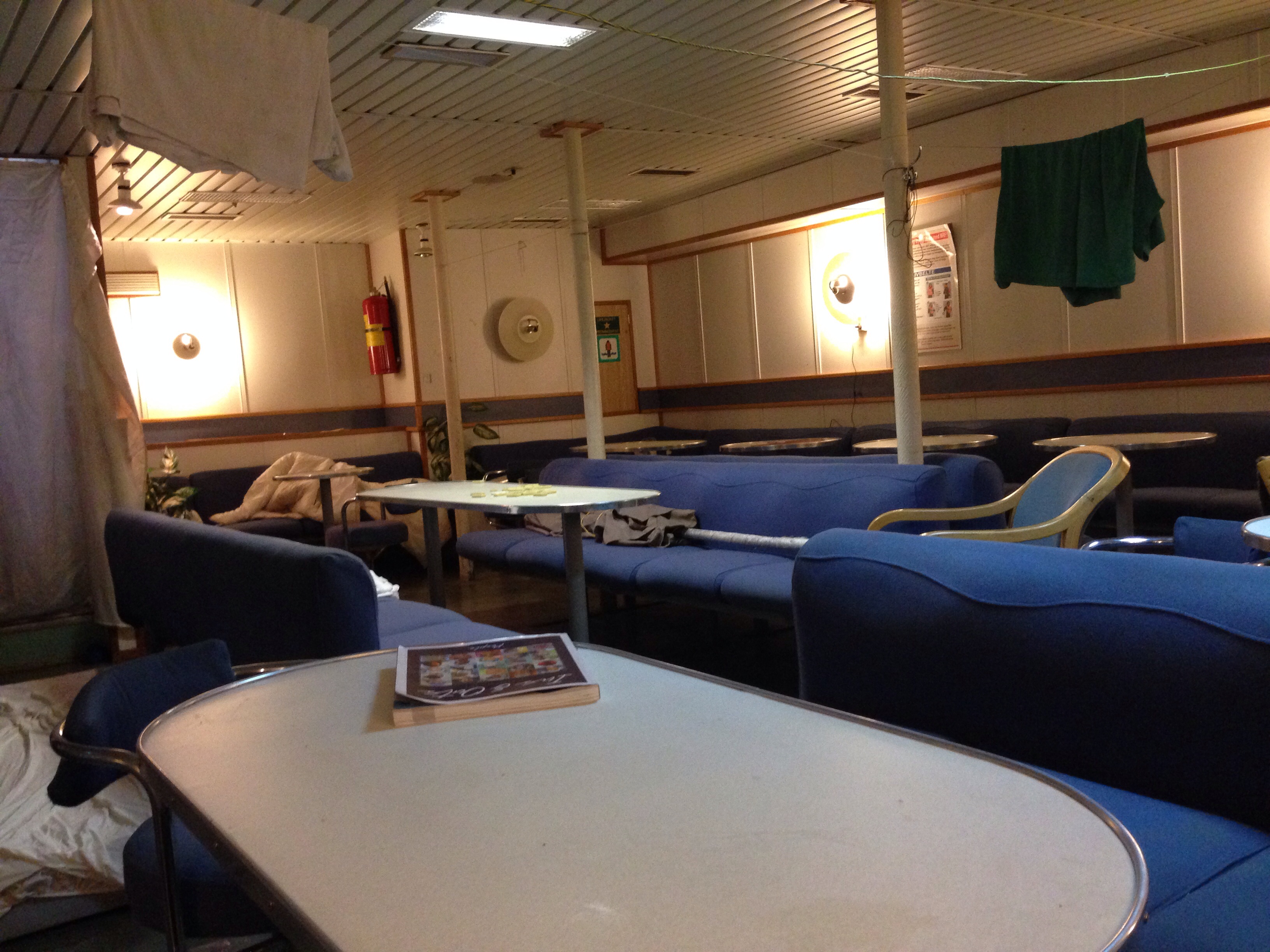 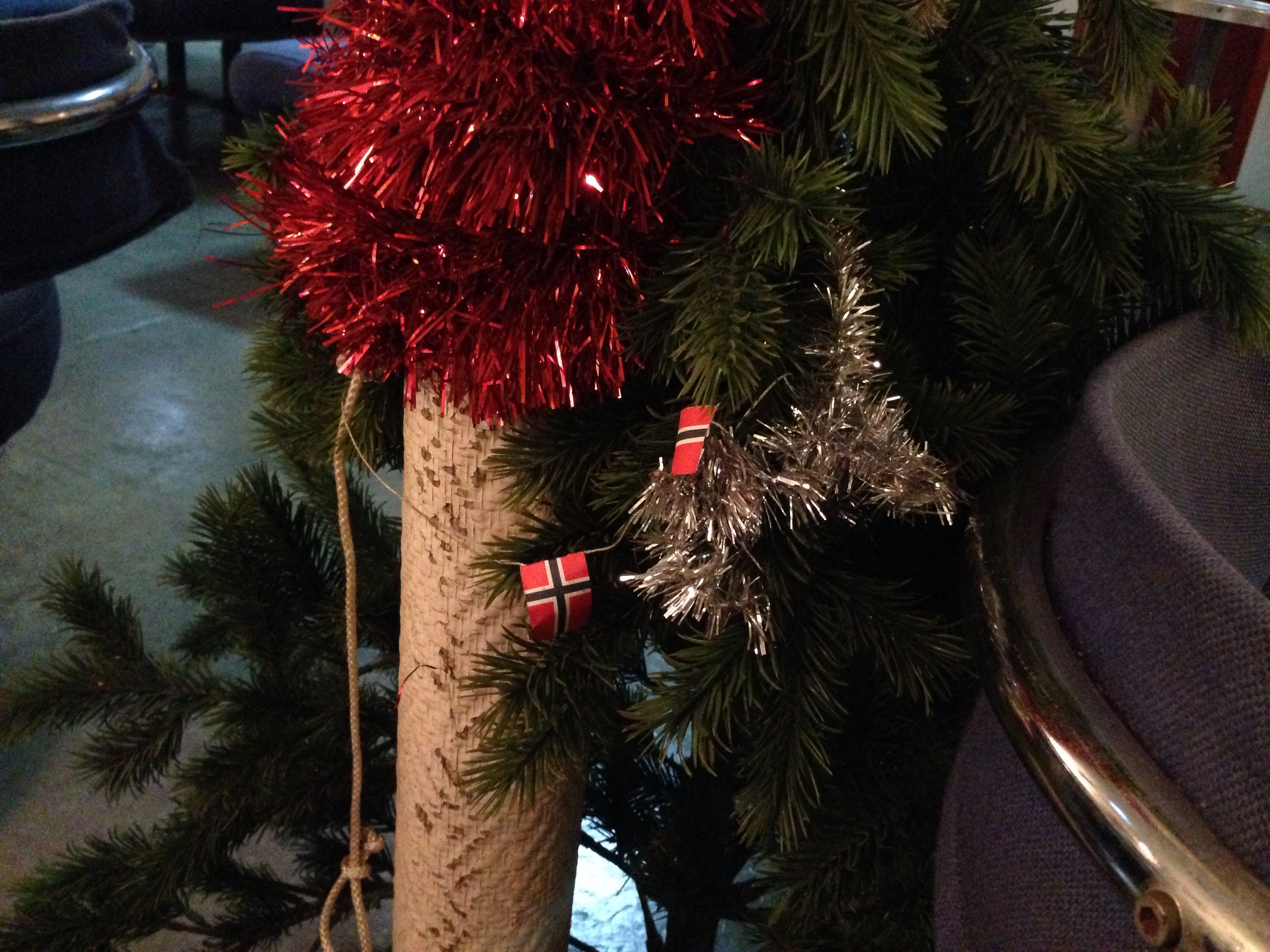 I once again slept in the lounge area and the Christmas decorations included the Norwegian flag.Although we arrived at 01:00am Wednesday "morning" customs and immigration did not release me from the ship until 08:30am. And by then the 3 boats heading to St. Lucia had all left. This I learned from BT at the Red Cross who once again received me with open arms. It's a funny thing...I've been traveling for a while now but the hospitality of the Red Cross in the Caribbean has superseded anything I have experienced since I left home. They have almost taken over on this project and I feel like I have been a passenger for a few weeks now while everything has been organized on my behalf. That doesn't really suit me all that well as I like being in control. But the kindness is nonetheless extraordinary. 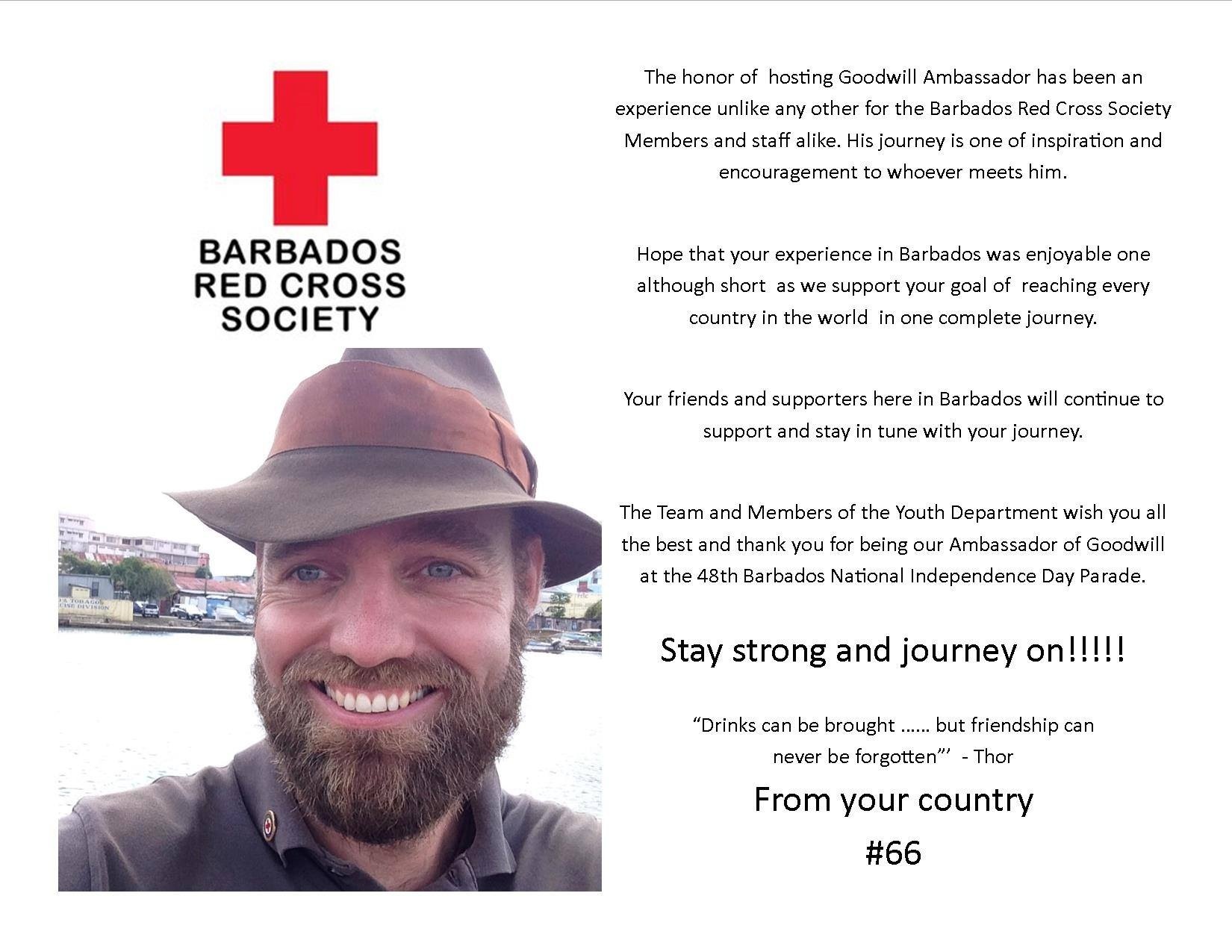 The Barbados Red Cross society honored me with this. Thank you!In my current situation BT, of St. Vincent & the Grenadines Red Cross society, has called every shipping agent, the immigration on several islands, various friends and probably Neptune him self, in order to find me a vessel. And BT is saying that there is currently nothing available. And I trust him...sort of...I mean, who would know better than him? But I still feel the lack of control. I would rather be down at the port with my two way radio calling up private yachts. But it's not going to help me. Because no vessel leaves without contacting immigration and BT has that covered. And that's somewhat frustrating. I'm pretty much ready to build a canoe by now. 50km? That sounds completely doable... ;) 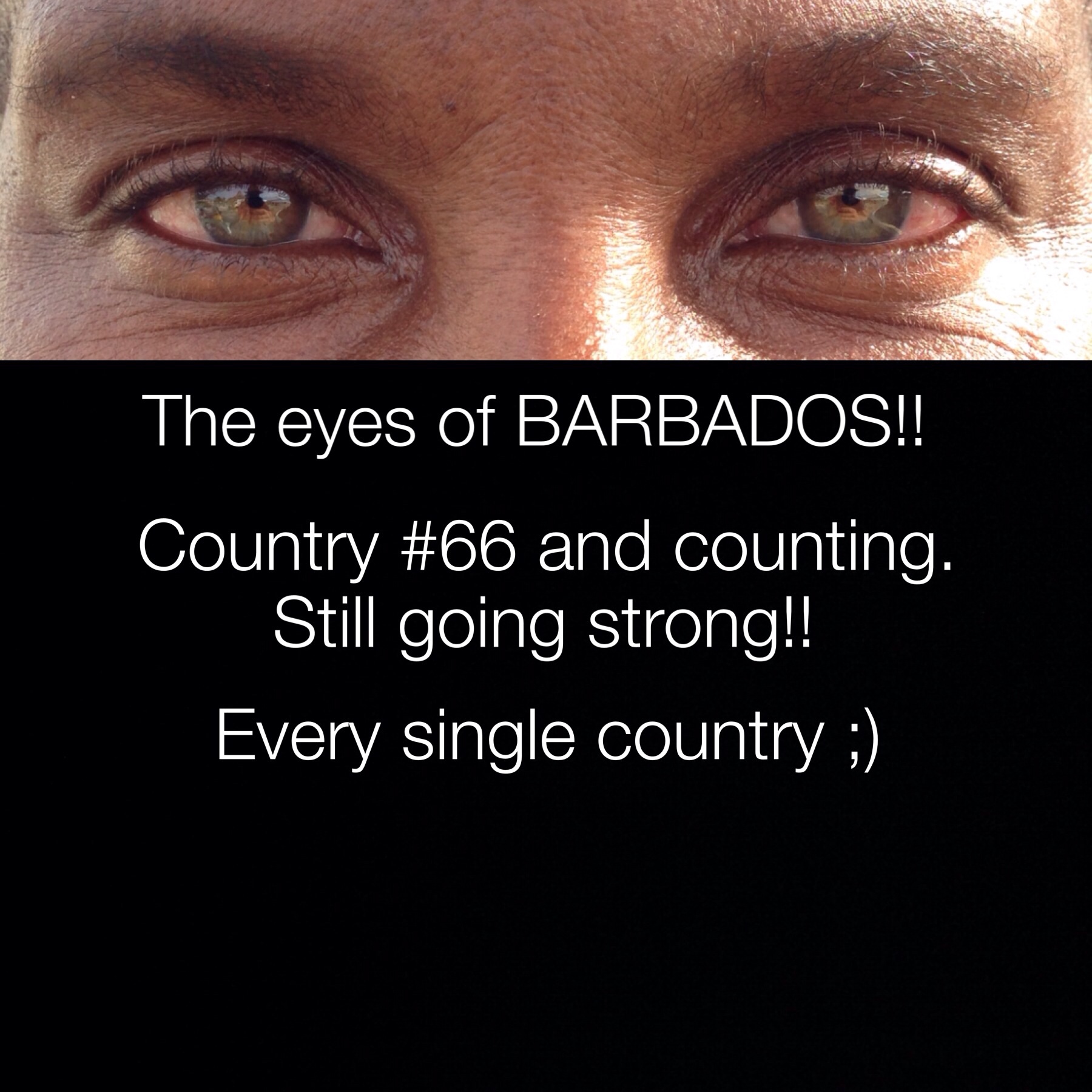 Best regardsTorbjørn C. Pedersen (Thor) - if you could travel to every country in the world, would you?