The "escape" from St. Maarten - the longest short route

A new year brings new hope and new energy. It's a fresh start on a clean slate. Why is that? It's just another day.

I had come to a point where I felt that I had exhausted all my opportunities. I had been to all the shipping offices several times. I had spoken to all the contacts I had made several times. I had been to the ports several times. And I had heard people say no to me several times. I was even relying on that the half empty hostel I was in would suffice for my entire stay if I would only tell them in the morning that I needed an extra night, and an extra night, and an extra night...But I was wrong. The hostel had been fully booked and I was required to pack my bag and go somewhere else. But where? St. Maarten isn't exactly a cheap island and lately I had been focused on leaving much more than staying. A woman from Facebook who had been following my updates for a while suggested that we could meet and have a beer somewhere since I had arrived to her island. I wanted to meet with her but my schedule was pretty full so it had to wait. How could this be so hard? The distance between the islands were short and the boats coming and going were plentiful. My access to them however was nonexistent. 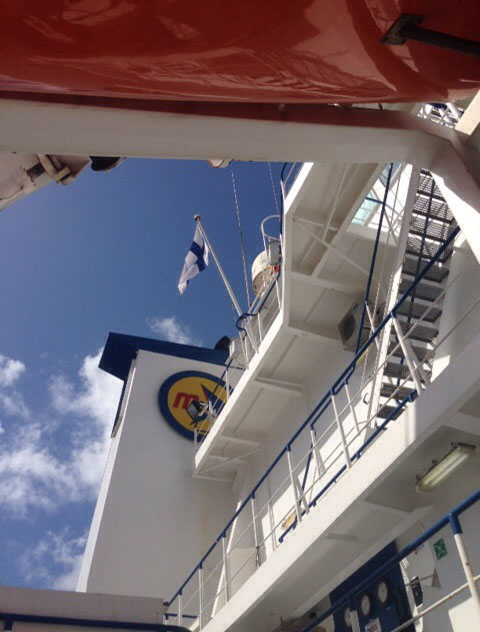 Most of the crew was from Finland :)While following a lead in the port I spotted a container carrier which I knew was going to St. Thomas (US Virgin Islands) but I had been told that they had no room for me. Since I was there I thought to myself I might go onboard to say hello anyway. Who knows? Things change. I then spotted Jimmy's car parked on the pier at the ship. I met Jimmy a few days earlier and hadn't seen him since. He was a helpful man so I felt good about that. The crew gave me access to the ship and soon I was speaking to the captain who confirmed that there was no space for me but invited me for lunch. So I had lunch onboard and got to speak to the crew onboard - and Jimmy. Jimmy was onboard having lunch too. After lunch Jimmy and I left the ship together and investigated a few more options for me. It was looking rather hopeless. 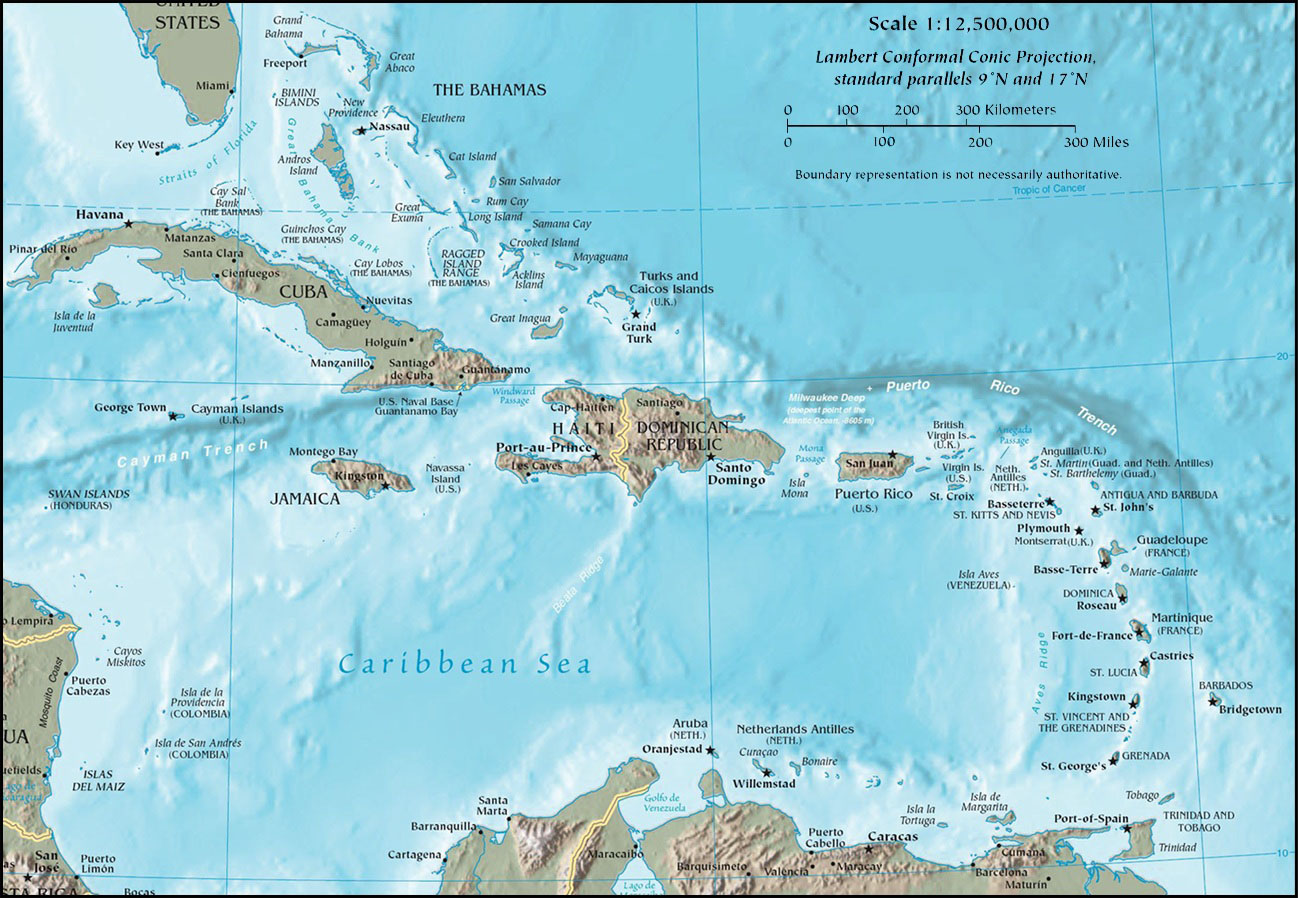 Especially because the captain onboard told me that I could not go with them to St Thomas because I had no American visa. Rubbish I thought! I have my ESTA approval which is enough for me to travel to the US since my country is a part of the Visa Waiver Program. And that is true...if I am traveling to the US with a commercial carrier. But after investigating the matter closer I realized that the captain was right. I couldn't travel to US soil on a privately owned carrier without a proper visa. To get this straight: I could sail (or fly) to the US (Puerto Rico or St Thomas) as long as I arrived with a ferry or a commercial airliner. However if a sailboat, a freight ship or a privately owned airplane were to bring me across then I would be denied access. What? Yes! The nearest place for obtaining a visa was Barbados. And that is far away when you are not flying. 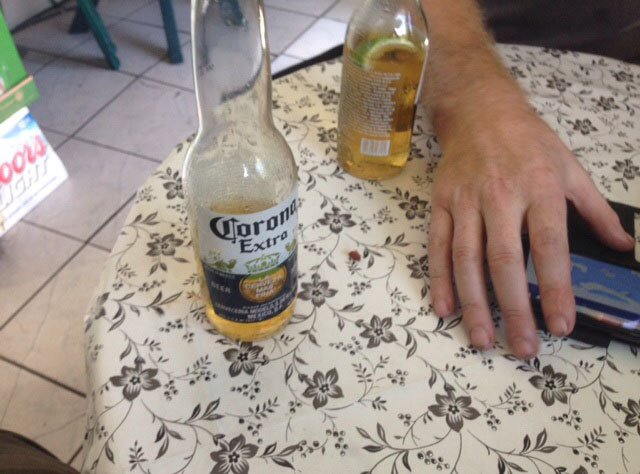 Jimmy and I drinking a beer, looking at maps, ships and possibilities.So with this news I know lost my options for looking for a boat to both St Thomas and Puerto Rico. My options had been cut in half! Now I was left with finding a boat to either the British Virgin Islands (BVI) or a direct connection to the Dominican Republic. However if I could reach one of the BVI's then I could catch a ferry to St Thomas because that would be okay. And from there I could catch a vessel to Puerto Rico because it would then be domestic travel (both islands are US territory). A lot more difficult - but not impossible. And to some degree very silly. 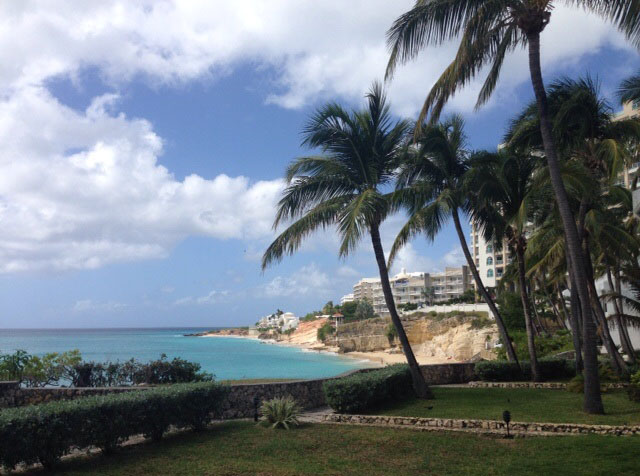 What an island to escape.I spent some time looking for a couch surfing host and must have sent out more than 10 requests but received no replies. I eventually sent a message to the woman from Facebook to see if she had a couch I could sleep on and to my great luck she replied yes! Great luck!! Her name is Rebecca and she moved to St Maarten from California while her husband David is studying at the local medical school. They recently moved into a new apartment with their 2 lovely girls and Rebecca was in advance excusing the mess from moving boxes. Actually all 4 of them picked me up and took me out for dinner! How amazing is that? After dinner we went straight to their "messy" apartment which they had only moved into a few days before. Apart from a few pictures which were standing on the floor the home was perfect! Rebecca had done an amazing job in creating a home for them within only 2 days. Moving boxes? Hah! :) The couch unfolded into a bed, Rebecca insisted on washing my clothes and she placed a towel and a fresh bar of soap for me in the bathroom. As the children went to bed David, Rebecca and I sat up late into the night talking and drinking tea. I am so ever grateful for the wonderful people I meet on this journey. 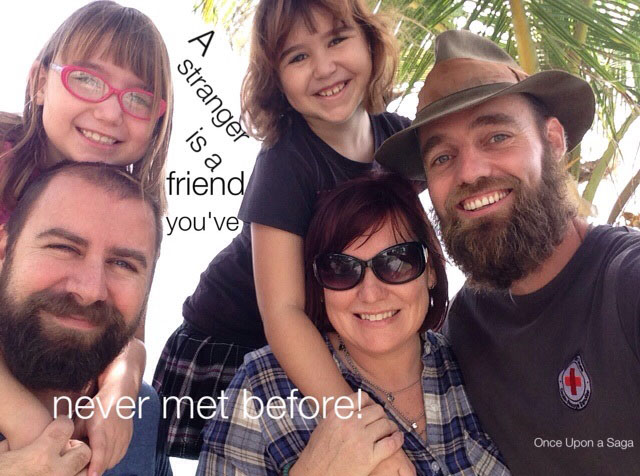 Rebecca, David and their 2 lovely girls Lily and Violet :)The next day I was able to book my bed back in the same hostel I had recently left. So that once again became my base. I had a new roommate who had arrived from Sweden. A Nordic Viking brother. Christian, which is his name, was a monster of a roommate. He used to enter strongman competitions and apart from not being green he did resemble the Incredible Hulk in some ways. For a while he was one of Stockholm's strongest men. Christian however was of a very friendly and very extrovert personality and when I told him that my plans for the next day simply was to walk back down to the port and look for some new leads he asked if he could join? Sure, why not. So the next day Christian and I invaded a few offices looking for new leads and I clearly felt a different reaction from people as I would ask questions with Christian standing behind me :) 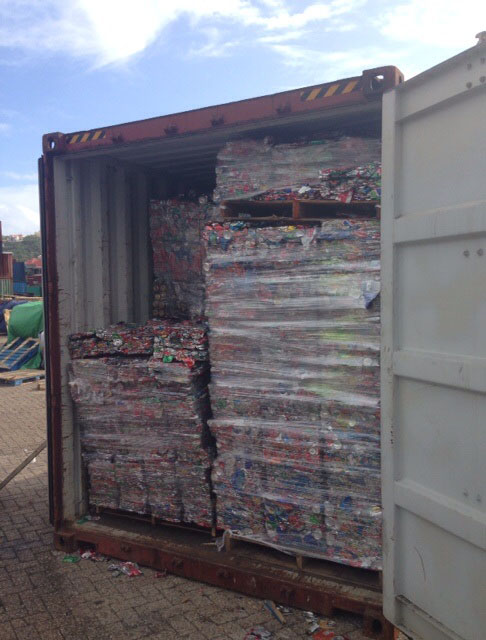 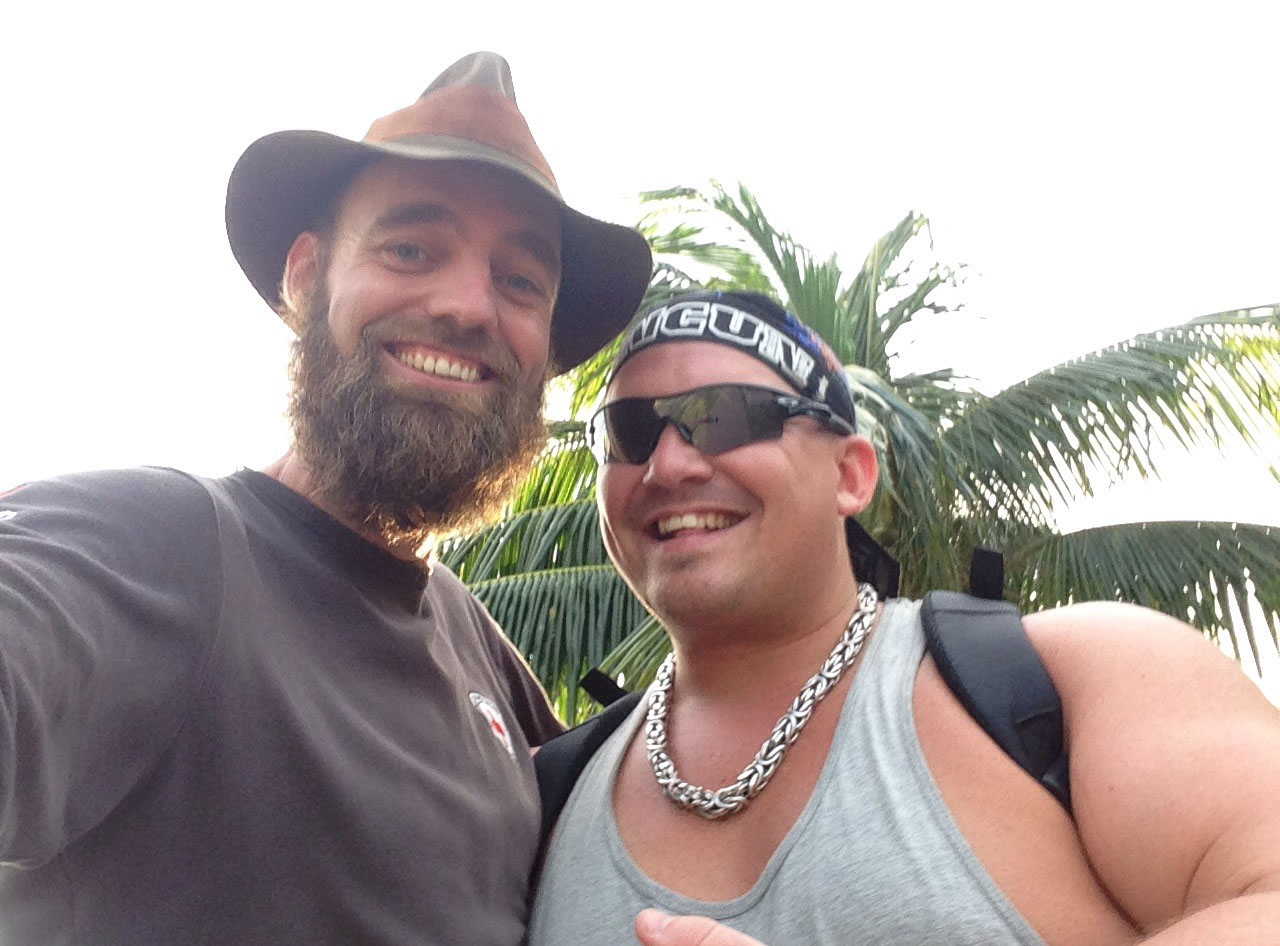 Christian and I on our day of walking everywhere.We walked past the cruise ship terminal and I felt like I wanted to give it an extra shot although getting onboard a cruise ship had long ago proved very difficult and almost impossible. Christian wanted to check out something else so we agreed to meet up as soon as I had been turned down at the cruise terminal. But one thing lead to the next and I was quickly introduced to the agent of a cruise ship who took me back to his office on the back of his scooter. That already had me surprised! Cleveland was his name. What a great name! Cleveland was very optimistic in regards to getting me on a cruise ship. In fact one of the two ships in the port were leaving for the Dominican Republic the same day! I didn't believe my ears and I did not dare to get my hopes up. Cleveland introduced me to his colleague Roullion and together they made a lot of phone calls. Then Cleveland and I got back on his scooter and headed back out to the cruise terminal. I had to leave my passport with security but they let me pass. Cleveland then introduced me to Ms. Alcira who works for a company that sells tickets to the ship. At first it was shot down as the cruise ship operated on a closed loop meaning that I would need to get off where I got on. But a few calls later it had been confirmed that I could disembark in the Dominican Republic. I received a discounted price and Cleveland, who now somehow had a car, drove me back to the hostel to get my bag. 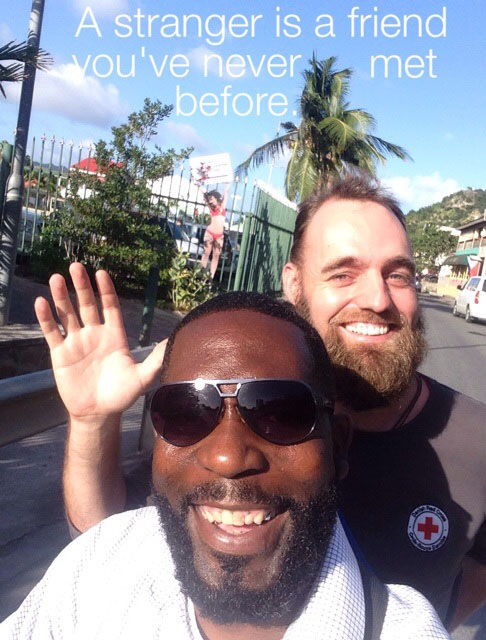 Cleveland and I on his scooter.But what about Christian? It all went so fast! Before heading back to the hostel I had a look for him on the marina where we were supposed to meet. But he was not there. Back at the hostel I quickly packed my bag, said goodbye, left Christian a note and ran back to Cleveland. We drove back to the port and midways I spotted Christian, jumped out of the car, gave him a hug and jumped back in the car with Cleveland. Minutes after that I was boarding the ship. 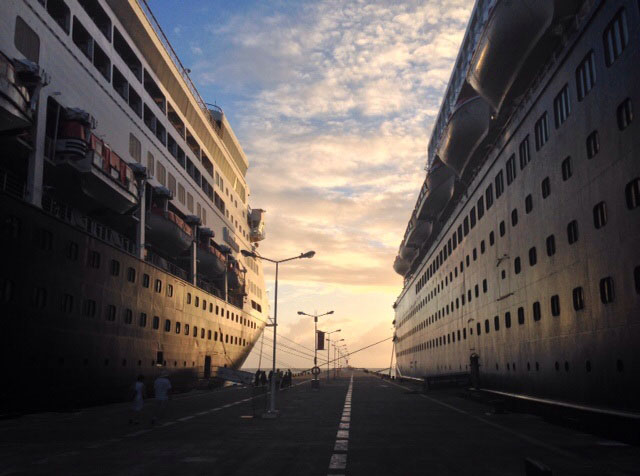 The greatest irony here must be that Cleveland works in the very first office I entered when I arrived to St. Maarten. But I spoke to someone else.It very much felt like a dream. Hours before all my leads had been shot down and now I was heading in the right direction without any of the US visa nonsense...and in the luxury of being onboard a cruise ship!!Cleveland got a big hug too! :)Somewhat ironically this cruise ship is heading south before it goes north and up to the Dominican Republic. So far we have docked at Guadeloupe (where I met with the 2 Norwegians that got me to Antigua) and we have docked at Martinique (which I bypassed on the sponsored ferry from St. Lucia to Dominica). Yesterday we docked at the port of Margarita Island which is just off the coast of Venezuela. So it sort of feels like I have been pushed back to South America after all the hard work I have put into going up the island chain. But tonight we will start our voyage in the right direction and on Saturday we will dock at Santo Domingo, Dominican Republic, country number 71. 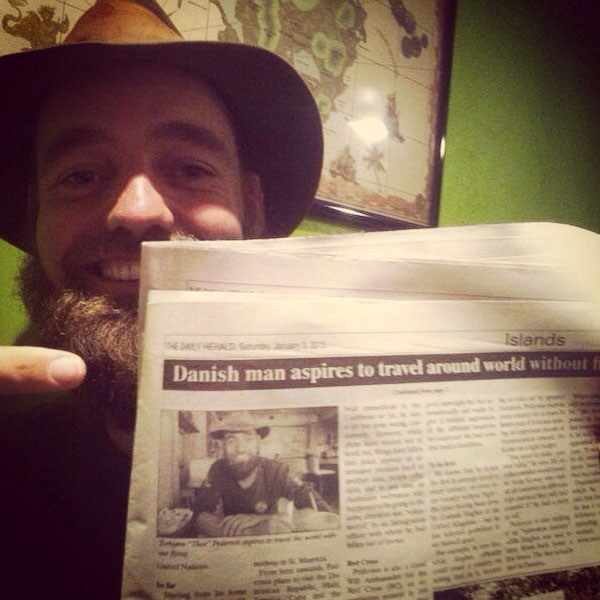 Made the front page in St. Maarten.I don't really know what I think about this cruise ship business. I enjoy all the included meals, the hot showers, the fitness room, the king size bed and being on the move towards the next country. But the travel form itself does not appeal to me. More about that next time. Ironically I am not that far of bring on usd 20/day with the discount I received. And it would certainly have been both more expensive and more time consumed to go via the BVI, then St Thomas and finally Puerto Rico to get to the Dominican Republic."Life is a box of chocolates. You never know what you're gonna get". 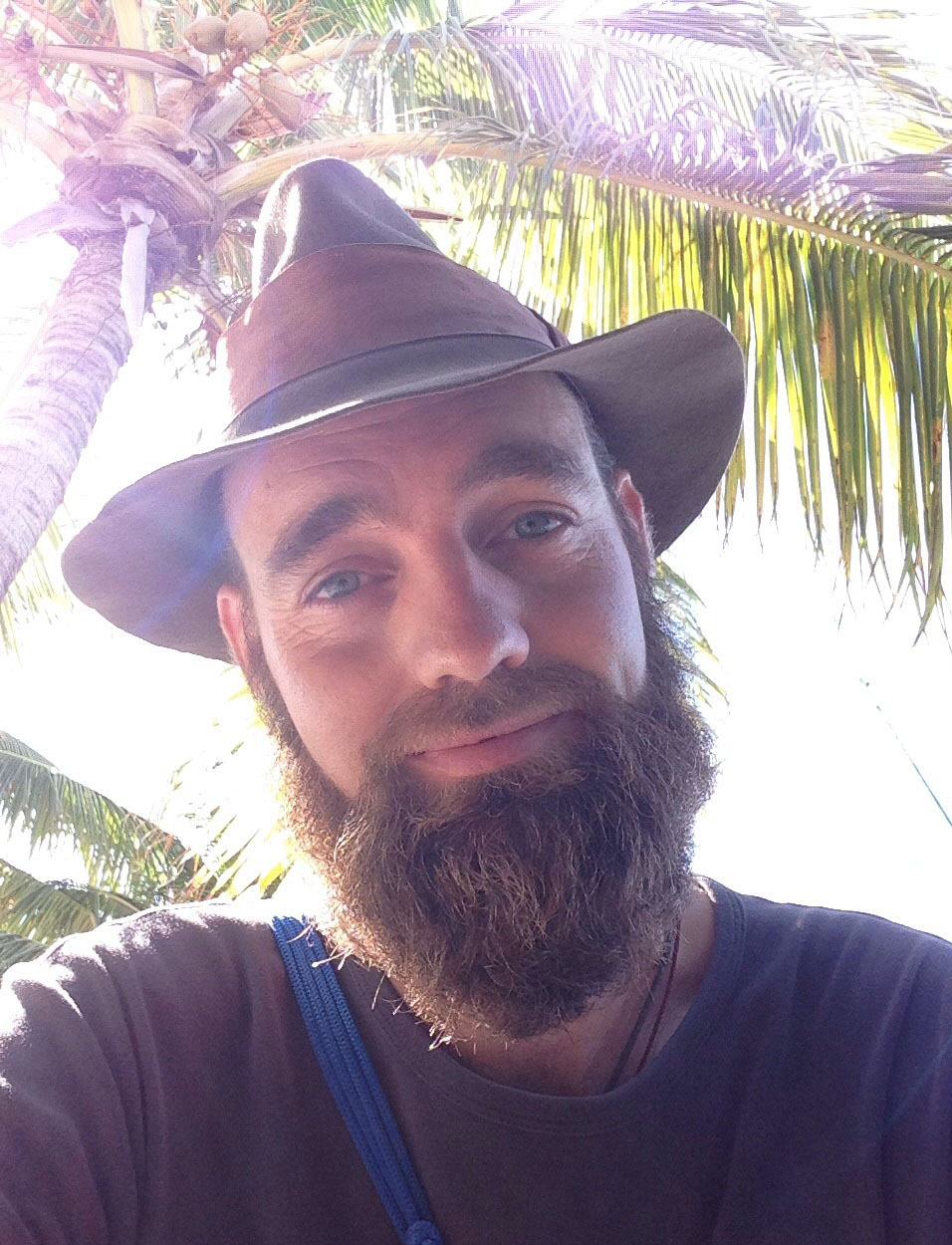