Somehow it just always seems to work out.

It was great spending time with the Red Cross in Haiti. It almost felt like I was back where I belong. It's hard to describe, but the familiarity of being around equal minded people and the compounds walls, which surrounded the offices, resembled several of the construction sites I have worked at. Maybe I just miss having a "normal" life. 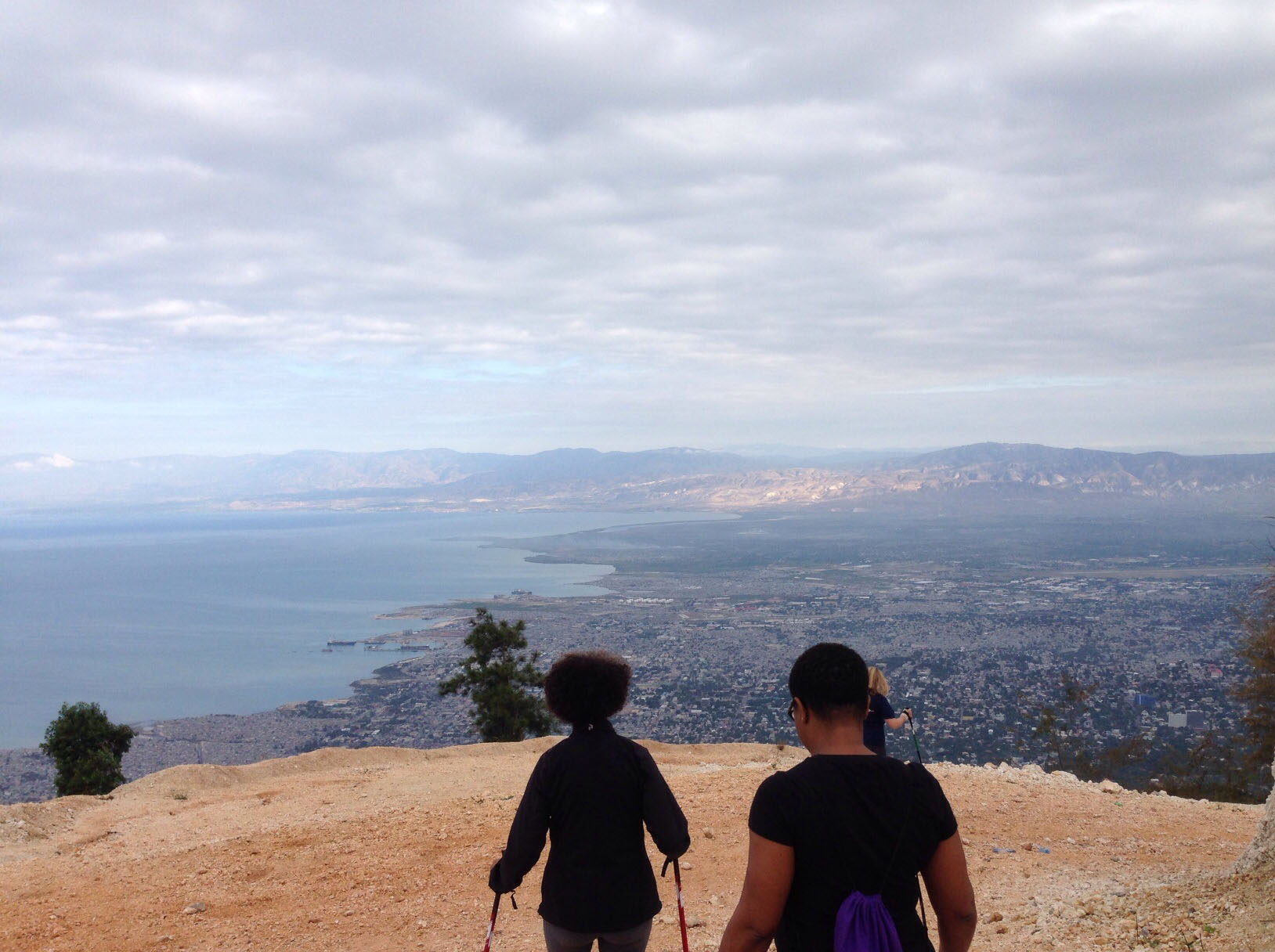 On a fresh morning hike with the Red Cross ladies :)I met so many amazing people that I do not dare to mention any in fear of forgetting others. But it is safe to say that Port-au-Prince presents at least 2 worlds: 1) the world which is under construction. 2) the world which is there to entertain the expats. 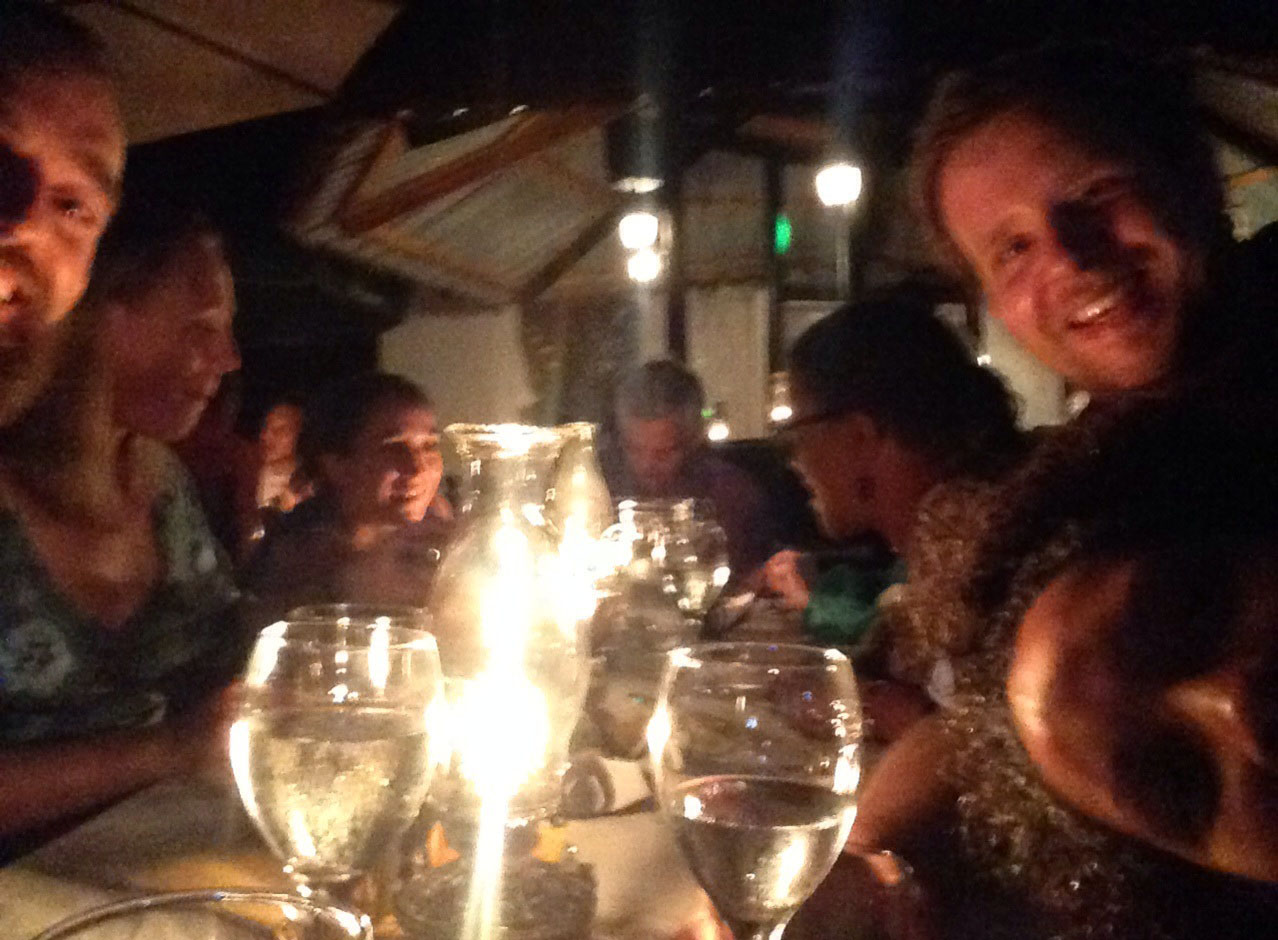 Dining and having a good time in Port-au-Prince.If you have money and live in Haiti you can find fancy restaurants, nightclubs, bars and have a modern home with a swimming pool. If you are below middle class then you are presented with another alternative. 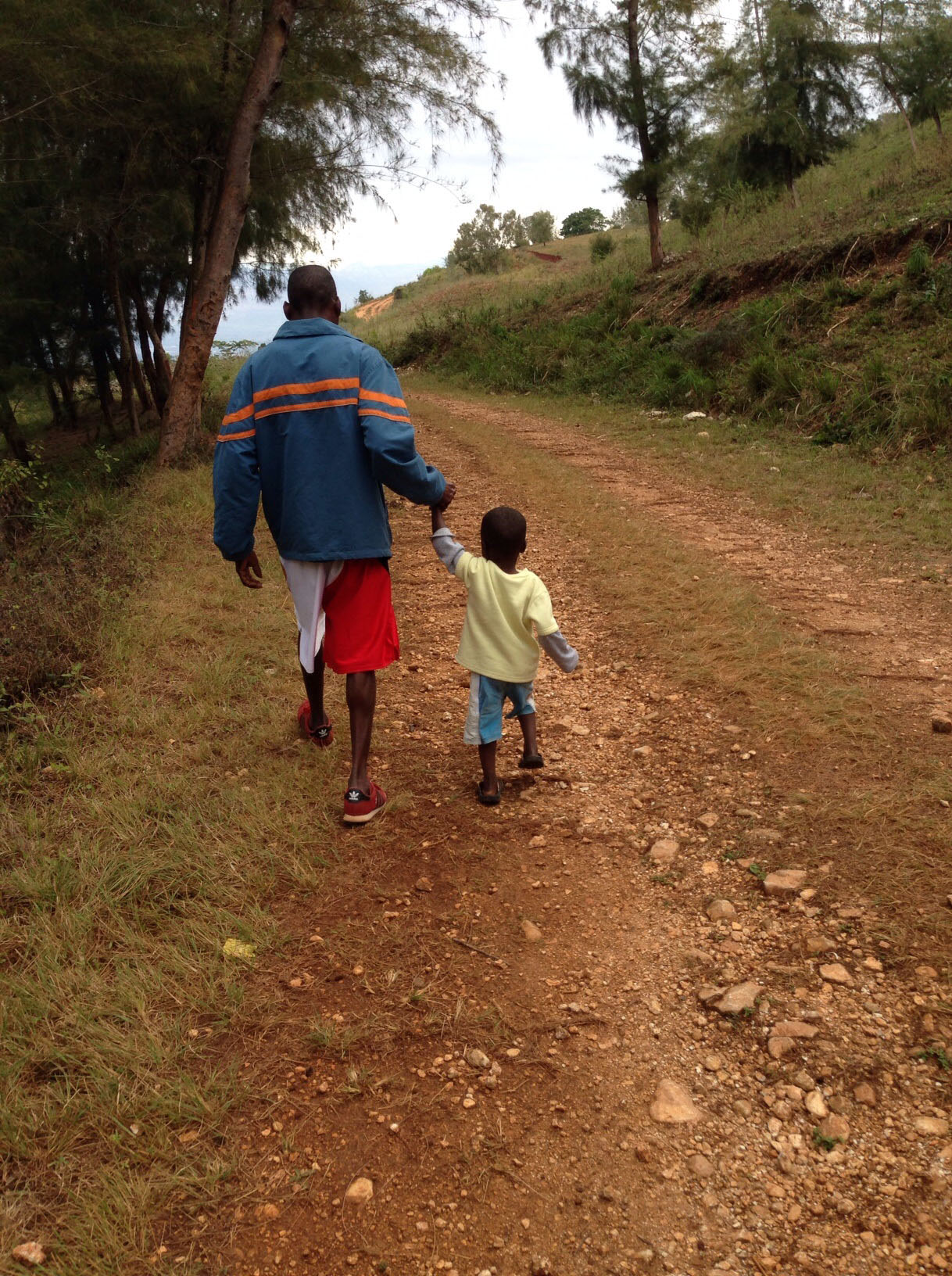 A short drive out of Haiti's capital will take you into the prestine nature that surrounds it.But nobody is denied the beauty of the land, the richness of the culture and the proud history of the country. Some would argue that Haiti is a land of opportunity. There is only one way to go and that is forward. The port is being rebuild and products as textile are being exported while tourism is being developed. Haiti already receives more than 1 million tourist per year. However it is debatable how much of Haiti most tourist choose to experience. 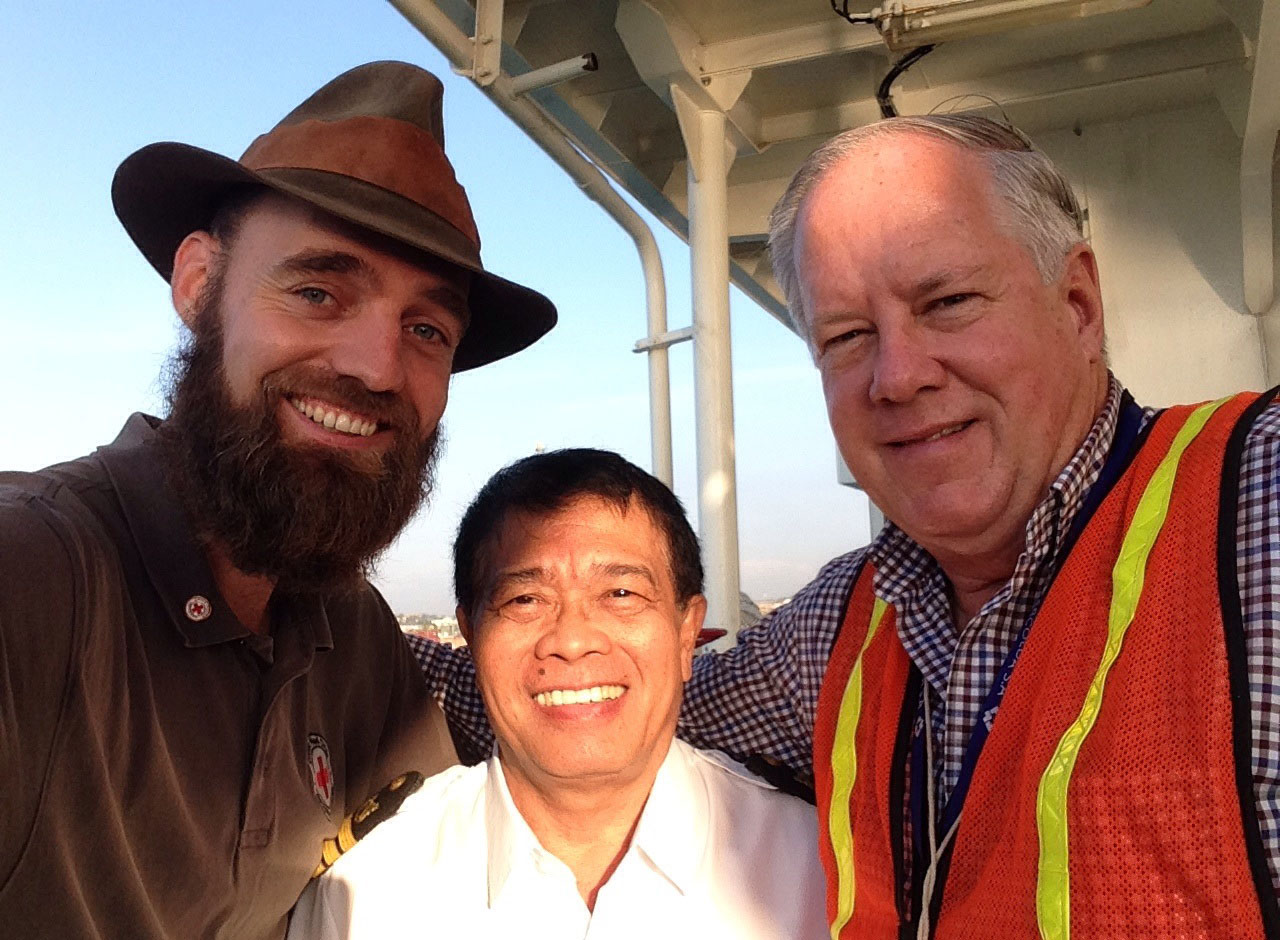 Me and my beard on the left, the amazing capt. Joel in the middle and my man Wilhelm on the right.It was Wilhelm and his son Michael that came to my rescue and delivered a boat that could ferry me across to Kingston in Jamaica. As Wilhelm explained to me his son Michael said: "dad, it's a long shot...but we can always try asking". And that long shot payed off. The owners of the container ship accepted to have me onboard. I met Wilhelm for the first time onboard the ship. He was acting as the ships agent and he greeted me as a mighty Viking!! He "tested" me immediately by putting a beer in front of me. Wilhelm is of German decent but was born in Haiti, is certainly local and speaks fluid creole. But you wouldn't know by looking at him. He has a fantastic spirit and speaks English like an American. I would love to go back for another beer. The next one is on me. 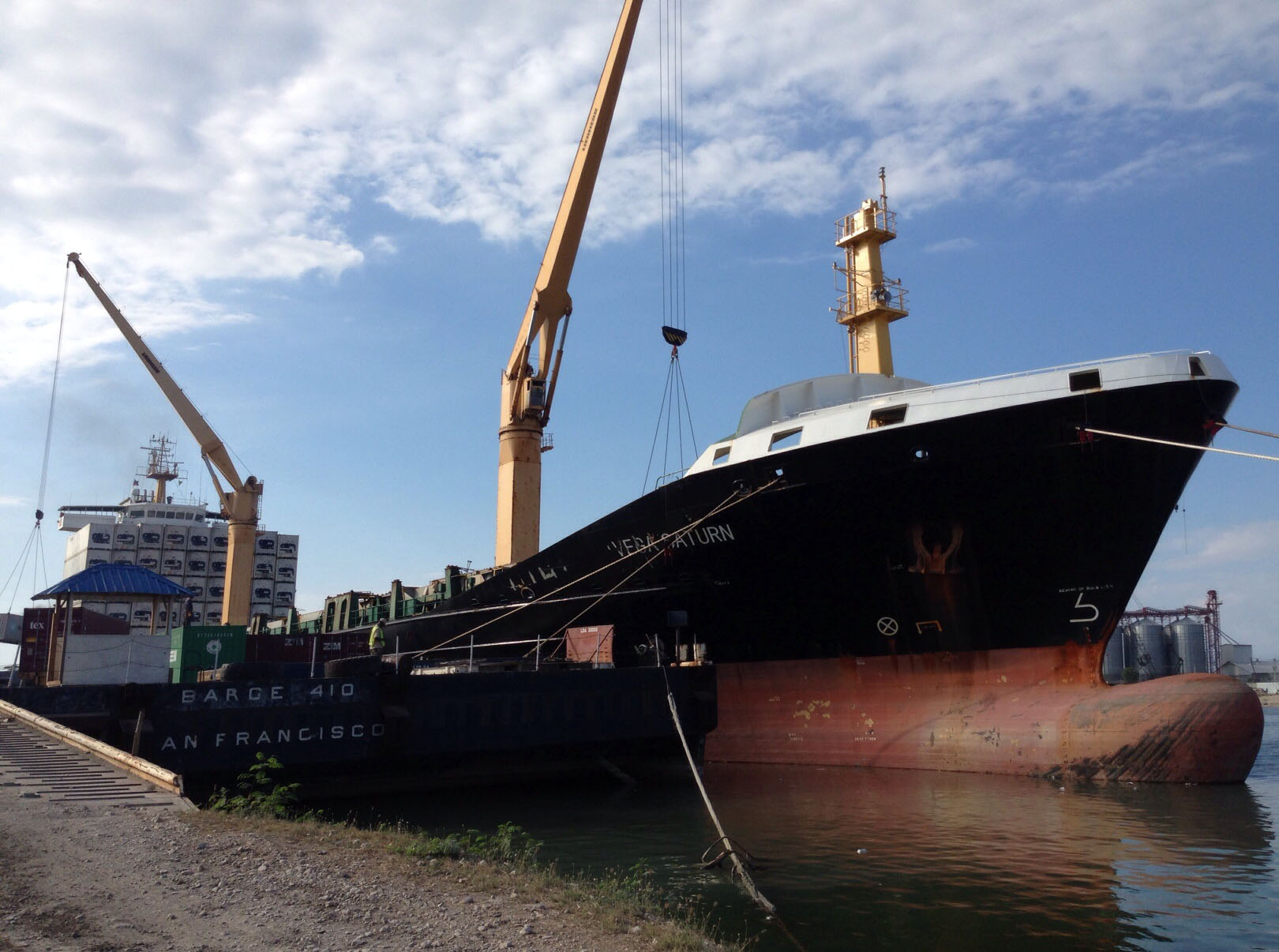 The "Vega Saturn" is chartered by Seafreight and Enmarcolda in Haiti is the agent. She is a fine ship! The port of Port-au-Prince is currently under construction and will be fabulous!The entire ship was manned by Filipinos. The captain, Joel, greeted me onboard and I was treated so nice that you would never know that I was onboard a cargo ship. I was shown to the 3. officers cabin which was to be mine for the 18 hour crossover. I had all my meals with the ships officers and took a lot of pictures and signed a few autographs. We eat as much rice and pasta in Denmark as we eat potatoes. But for whatever reason they never served me rice onboard. The Filipinos would have rice 3 times every day: morning, lunch and dinner. But on my plate it was always substituted with potatoes. I suppose it was just one of those funny cultural misunderstandings. I was also served cold water and every one else had water which was room temperature. It shows a lot about hospitality when someone goes out of their way to make you feel comfortable...even when it's misunderstood :) 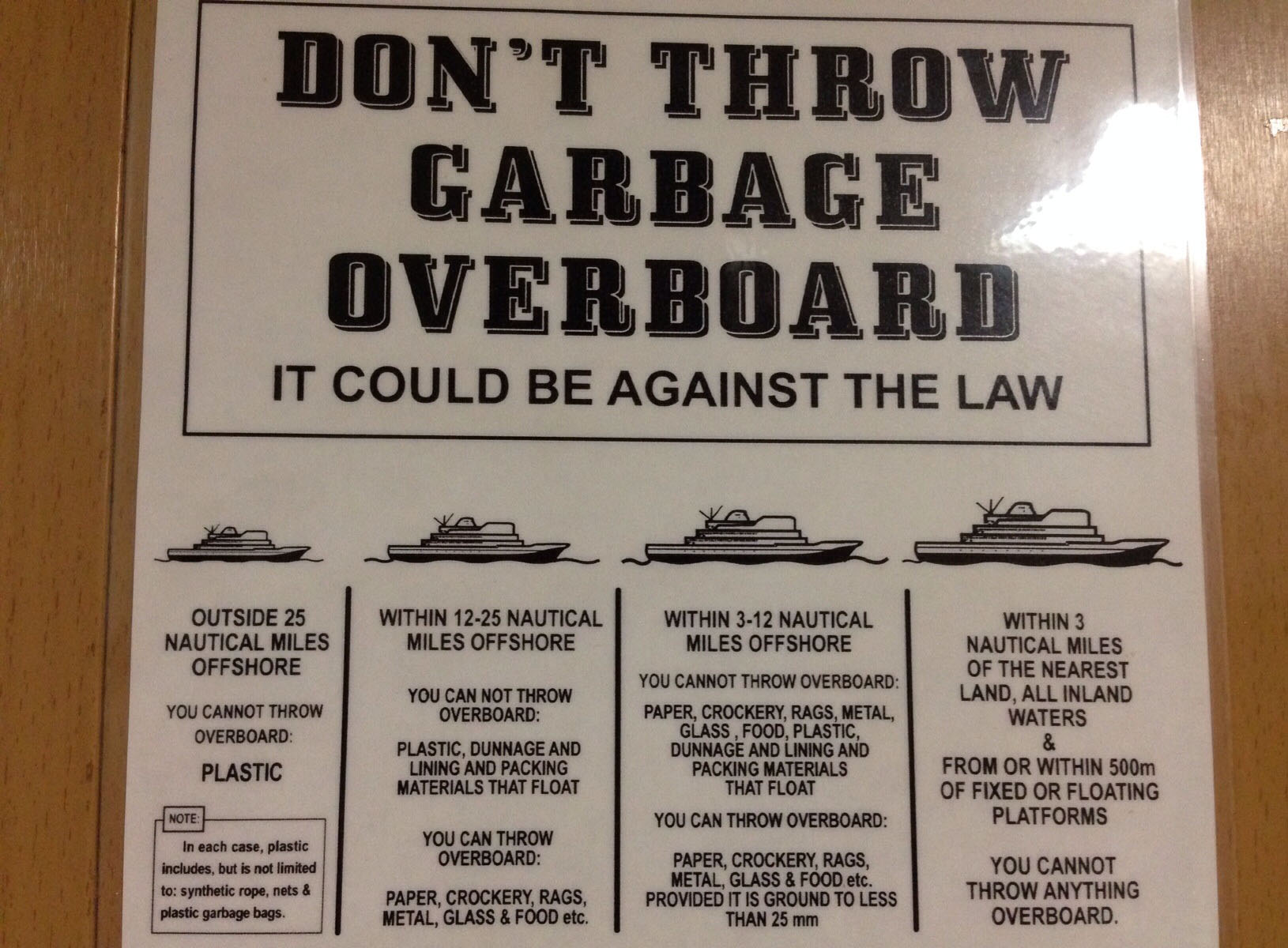 Most ships have a lot of signs. This one caught my attention.We left Port-au-Prince late in the evening and arrived the next day in the evening at Kingston. But we did not dock immediately because we were required to wait for the quarantine control. Later that evening we were permitted to dock. Because it was late I stayed one more night onboard so I could get an early start in Kingston the next day. An immigration officer came onboard that night and misunderstood something. He wasn't ready to let me into Jamaica unless the ships owners would take responsibility for me? He mentioned some paragraph and he was very immovable in terms of listening to my case. 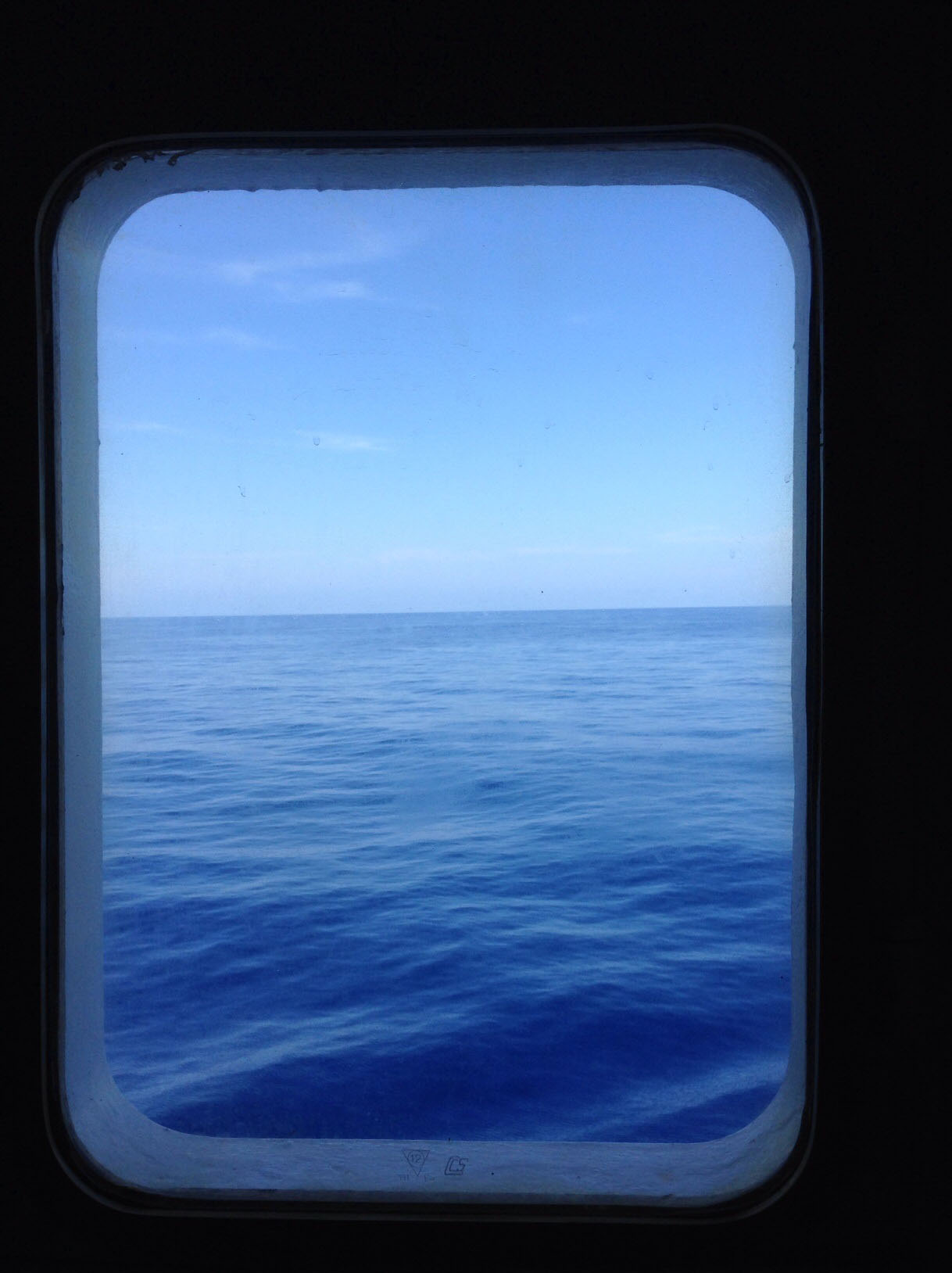 My view at sea.The case here is that most any immigration officer would want 2 things from me:1) Documentation for my scheduled departure.2) Documentation for my sustainability in terms of finances.The first part shows my intentions of leaving and the second shows that I have not arrived to make financial gain based on the countries welfare system. 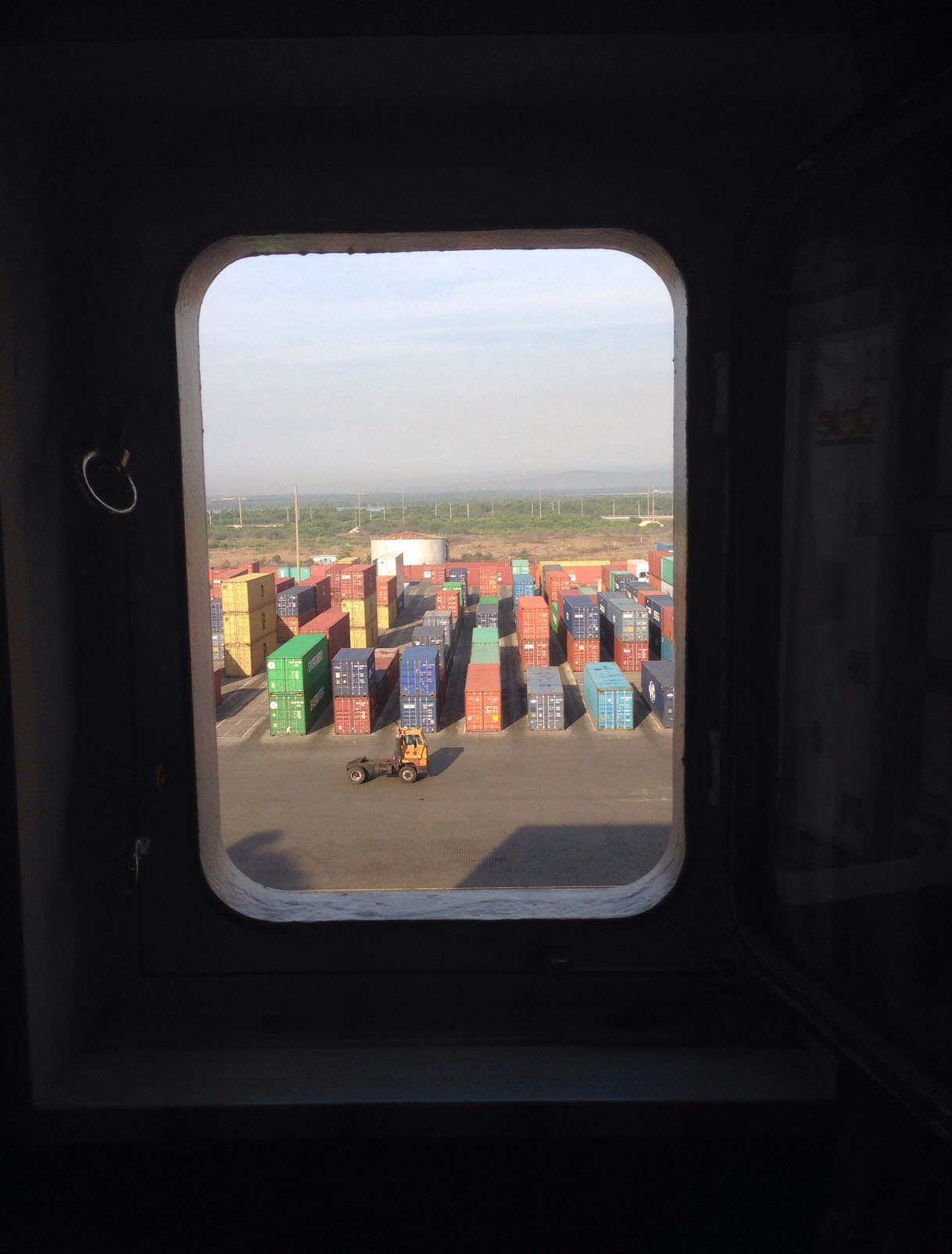 My view in Kingston.I argue this:1) I am traveling to every country in the world. Please see the letter of Intent and feel free to make an online search for the project. You will find countless interviews documenting my claim.2) I'm on a sponsored project but I am also traveling with a number of internationally recognized credit cards.As a bonus I offer the immigration officers this:Please go ahead and contact the director general of the local Red Cross office (name and number supplied). The director general will be happy to take responsibility for me while I am inside your country.All of the above has been enough for any immigration officer I have come across within the Caribbean. 10 countries so far. But Jamaica had to be different. I think the immigration officer and I agreed to disagree and he told me that his supervisor would come onboard to meet me the following day. But the next day that however never happened. Instead I was left on the ship to wait and wait and wait. I did not know exactly what was going on but I heard rumors that immigration had accepted the Red Cross to take responsibility but they had to have it in writing. 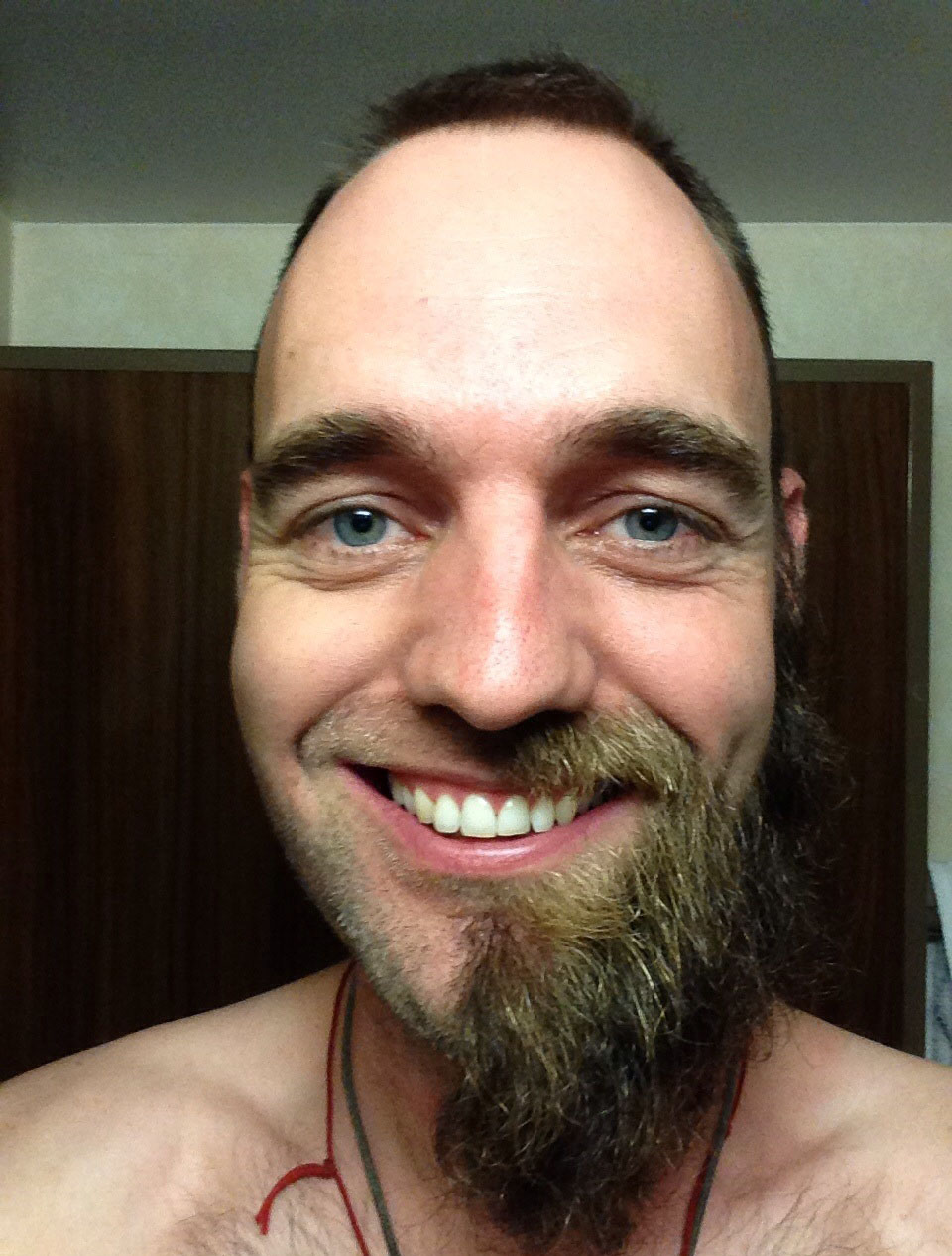 I had to shave for my girlfriends arrival. This is what I call a compromise :)Captain Joel was very cool about the situation and told me that I was welcome to stay onboard as the ship would proceed to Costa Rica and then Panama. But I had a date with my girlfriend whose airplane was approaching Jamaica. 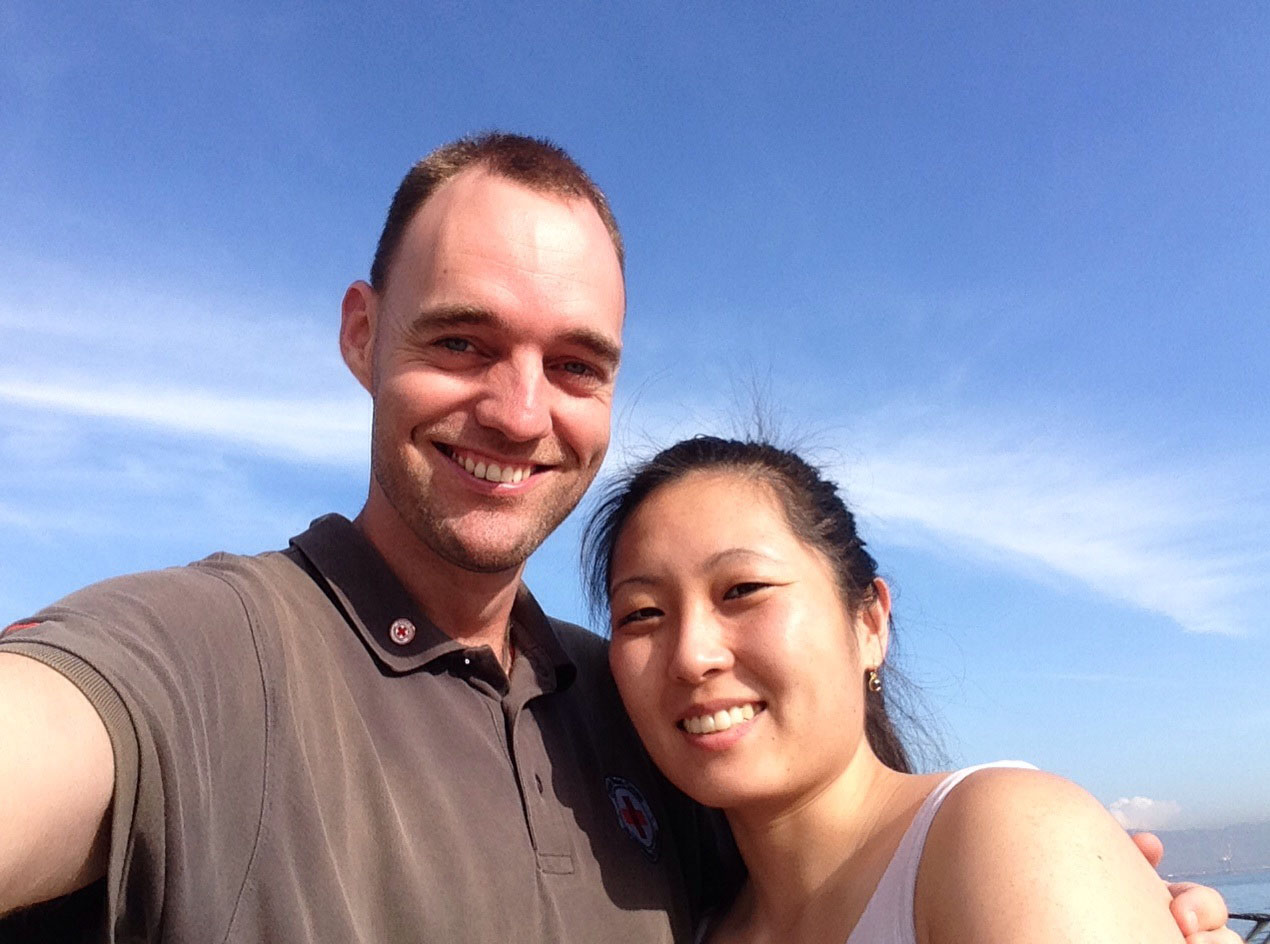 My wonderful girlfriend, Le, finally arrived to see me for the 5th time since I left home.I was only able to disembark around 6:00pm and headed straight to the airport to meet my girlfriend. From there we made it to a nearby hotel. We had made it. It's a lot harder to plan these things that one would think. But when my girlfriend asks me: "where do you think you will be in 45 days from now?" then I need to think hard about it.The next day we dropped by at Jamaica Red Cross and had a local meal and a good talk with them. Quite uniquely I found that the Jamaican Red Cross has a school and I was introduced to the students. The youngest ones mostly wanted to know 1 thing: "CAN WE COME WITH YOU??!" 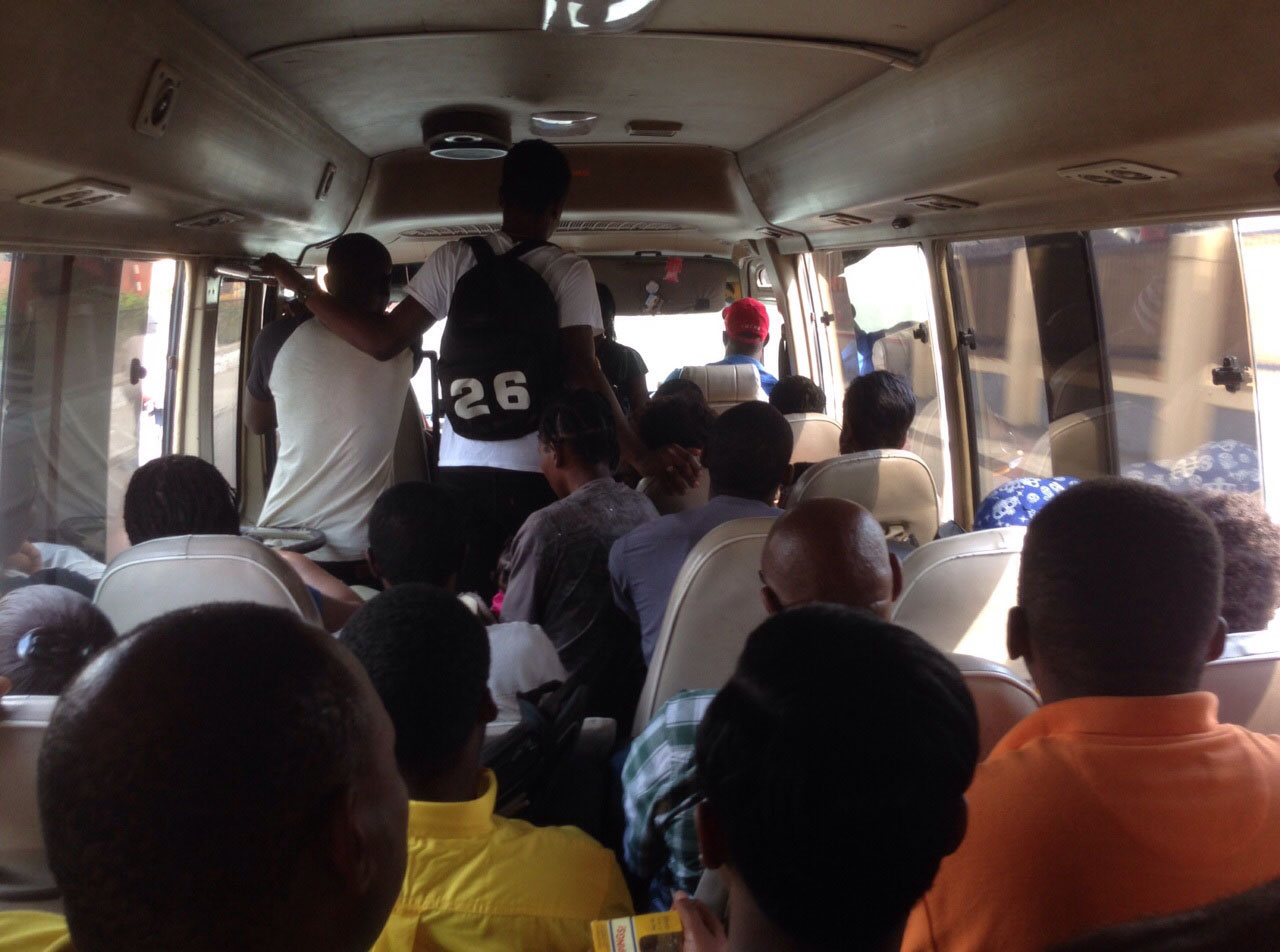 In Jamaica they can fit 36 people into a bus with 23 seats and no room for standing. Perhaps that's why it's cheap?After another night in Kingston we headed north to Portland which is a less touristic part of Jamaica. We booked us in to a guesthouse for the first few nights and will move to another guesthouse later this week so that we can get closer to the beach.

The fruit and vegetable market in Port Antonio has a little bit of everything.So what is Jamaica like? Well, it's a part of the Caribbean. It has a population of around 3 million people and as much traffic and people on the street as a country with 10 million people. Most people are concerned with what I have heard about Jamaica? They tell me not to listen too much to the news and to enjoy the country. When I question what they think I might have heard then they say: "unemployment is high, the crime rate is up. But don't worry - enjoy". My comeback is that what I know about Jamaica is that it has an easygoing atmosphere, it's famous for Bob Marley, reggae, jammin', Usain Bolt (the worlds fastest man), "Jamaica got a bobsled team" (cool runnings) and for its natural beauty and beaches. When you think about it then most of us who live far away from the Caribbean really do not distinguish much between the islands. I doubt that most people know that it consists of 13 countries and before I came here I only knew the most "famous" countries. Countries like Barbados, Haiti, Jamaica and Cuba. I sure do know a lot more now. 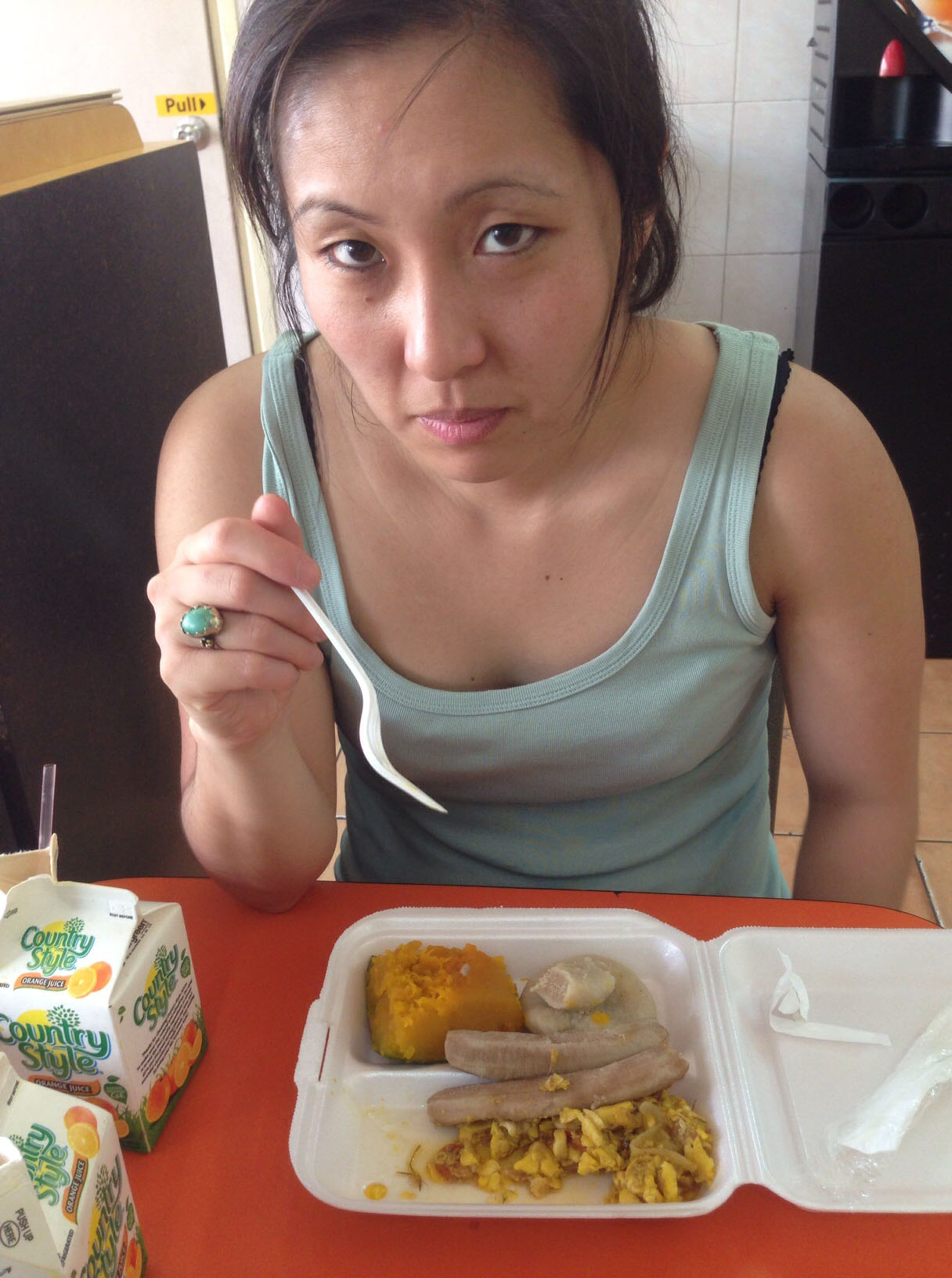 Local food sometimes has an acquired taste. "what's wrong? I thought you told me to eat my way through every country?" ;)Jamaica is different from the other countries in its own Jamaican way. The roads are narrow, the traffic is crazy and esthetic beauty is not the first thing that comes to mind when I look at the cities and villages I have been to. But it certainly has a charming atmosphere. People are very happy to chat with you and the easy going "ya man" is dominant wherever you go.I have a few things I need to finish up on. This blog is one of them. But now that my girlfriend is here I should get ready to kick my shoes off, walk into the ocean and dream away....Jamaica - we are here!! 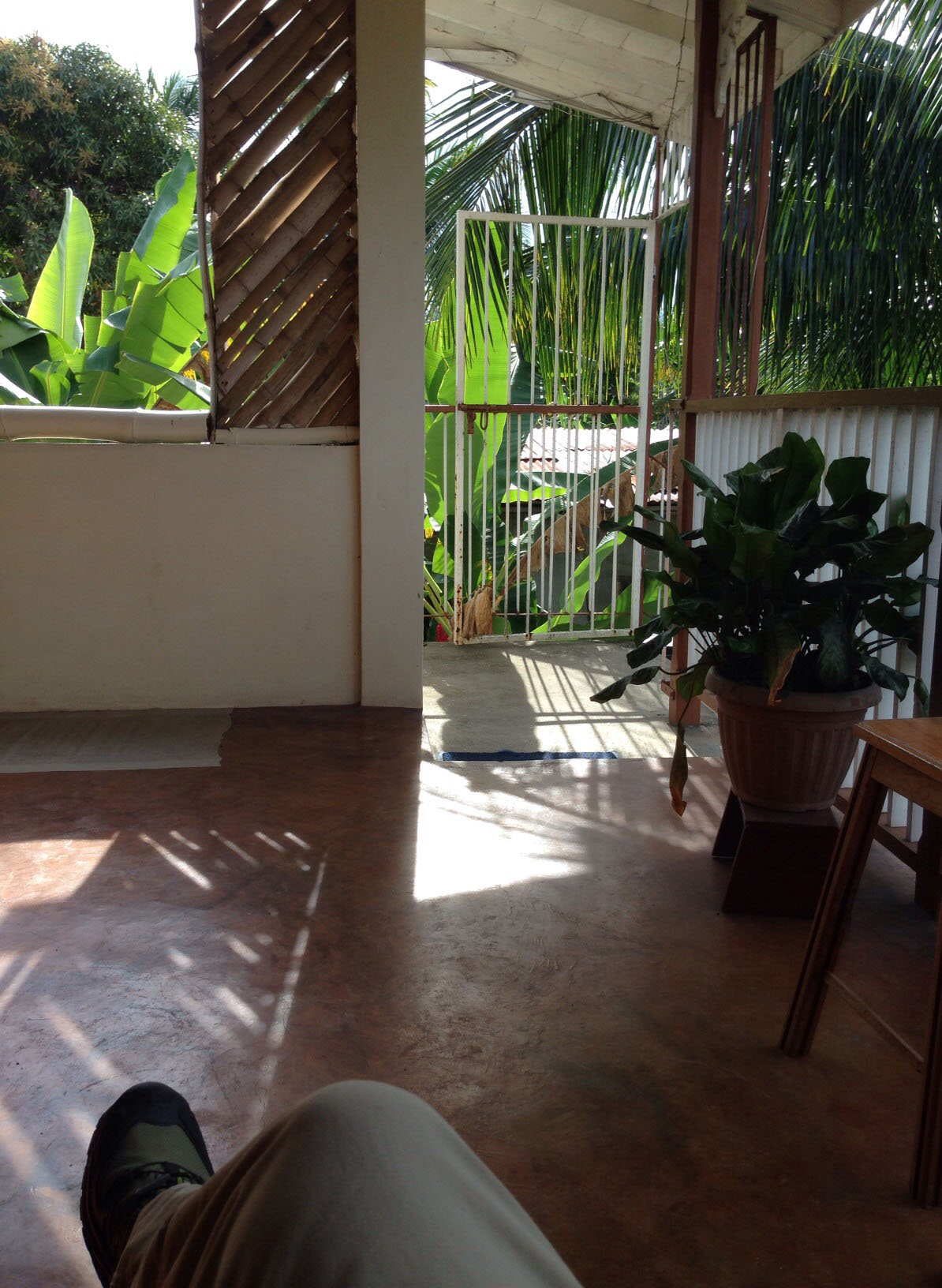