The last of Jamaica...for now

And then sometimes I figure that I simply should't think too much. My mind has been occupied lately anyway so there is really not much room for philosophical questions. Perhaps there never was :) 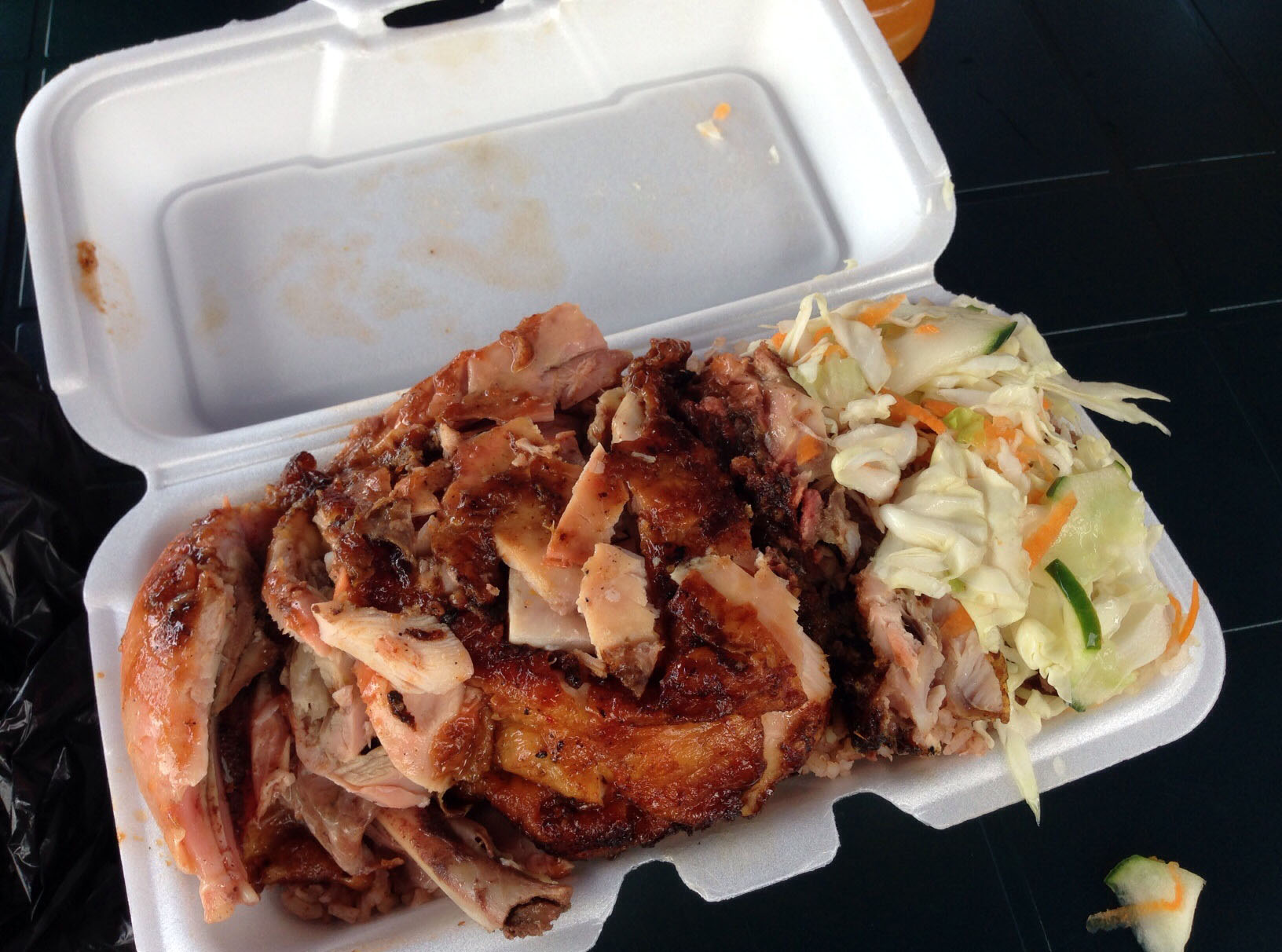 Jerk is a style of cooking native to Jamaica in which meat is dry-rubbed or wet marinated with a very hot spice mixture called Jamaican jerk spice. And you can find it EVERYWHERE! :)

I checked in to a Japanese hostel in Kingston the day my girlfriend flew home. Back on budget and in a Japanese hostel of all places? I did not know that when I booked it. Actually it was 100% for the Japanese until recently. So all the signs were still in Japanese and basically all the guests were Japanese and did not speak English. That was a strange and wonderful experience at the same time. 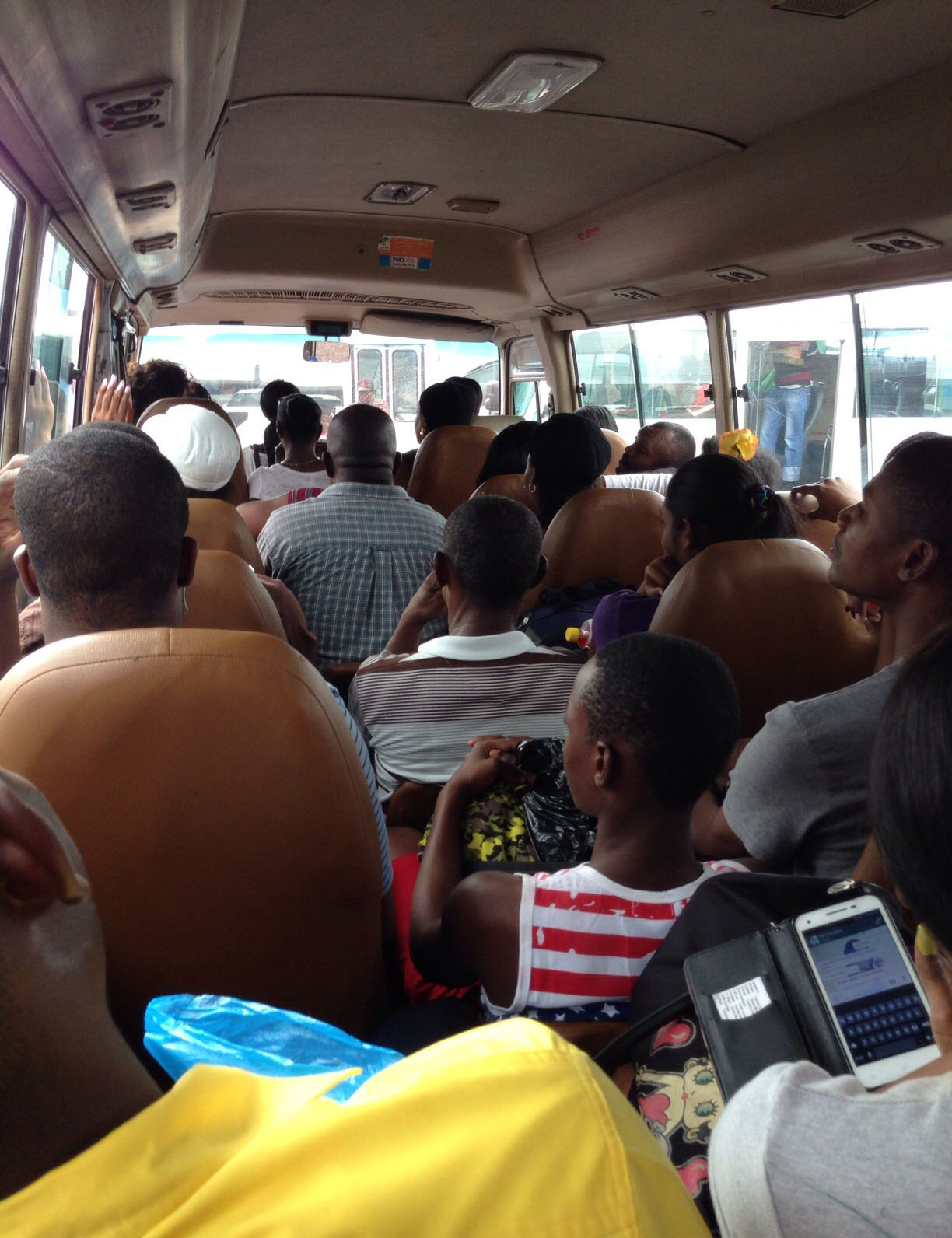 I still get amazed when it comes to how many people fit into a Jamaican bus :)I slept the first day. I was so tired. The next day I sat and did administrative work all day. And the day after that I checked out and got on a bus to Montego Bay. It is also called MoBay but I'm not going to do that. Montego Bay is on the north western coast of Jamaica and it is the 2nd largest city. It is also a city where cruise ships arrive. I had my eye on the cruise ship that leaves Montego Bay in order to circle Cuba and return to Jamaica. Could I get onboard? 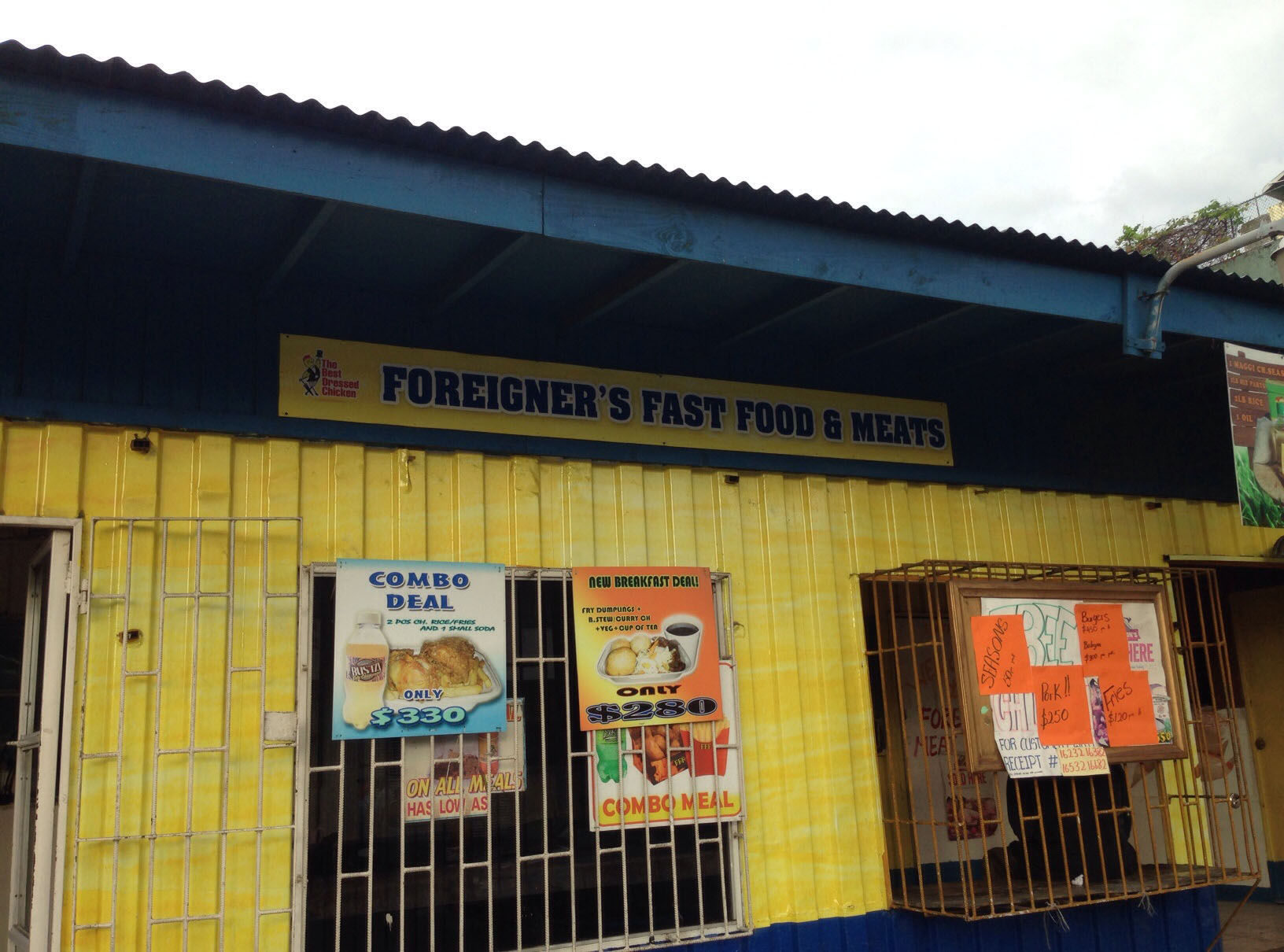 Jamaicans seem prepared to do business at any given time. And if you are a foreigner then this is clearly where you should eat.The alternative would have been to find a sailboat that was going across but there is much uncertainty in that regard. Where do you find one? When do they leave? Will they take me or not? Paul, the manager at Errol Flynn Marina in Port Antonio, has been very helpful. And he might have been my best bet if everything else failed. 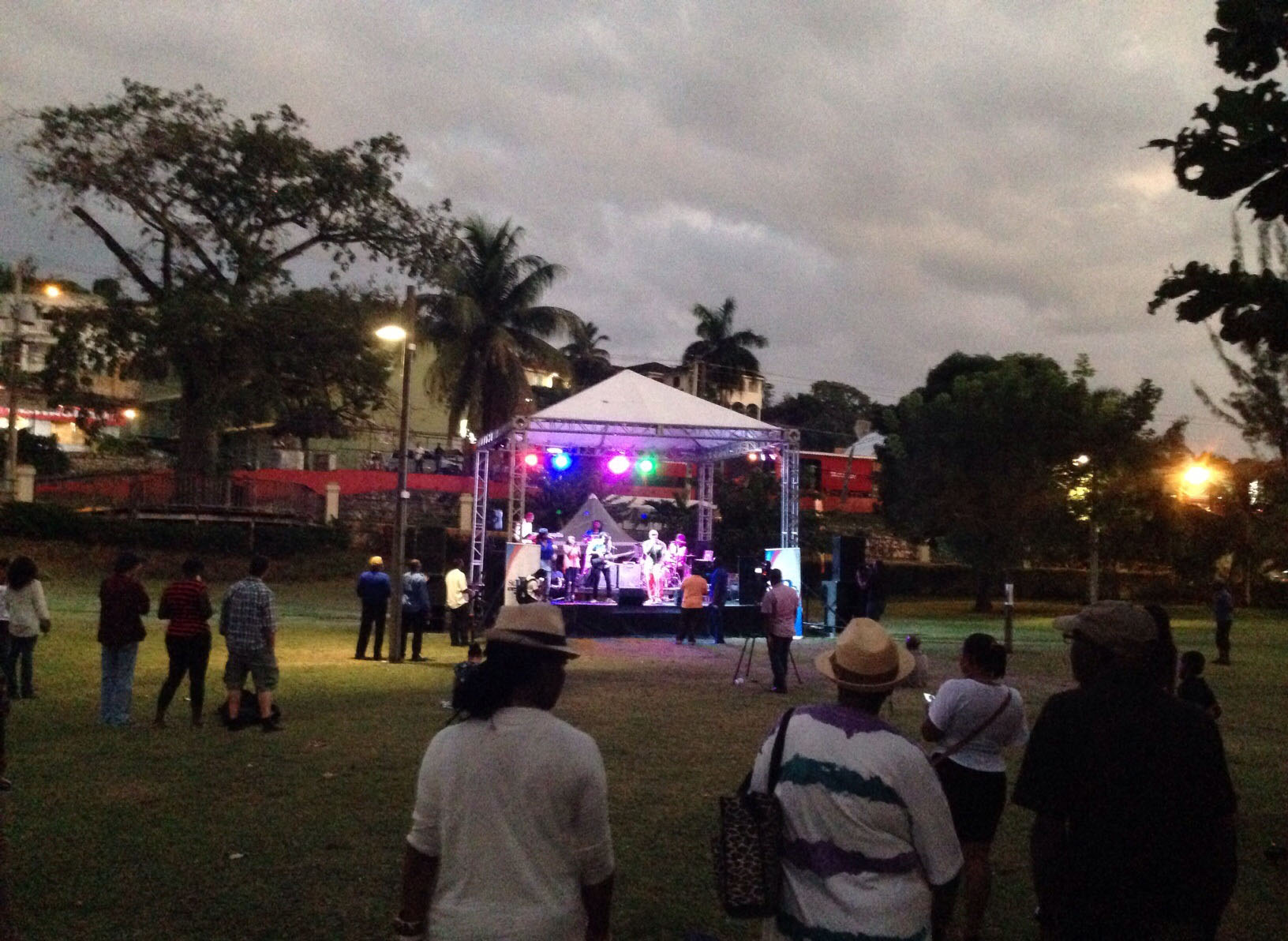 I love the love of music which is so prevalent in the Caribbean. It's everywhere all the time.I found a relatively cheap hostel and had to walk there because I arrived during rush hour and all the route taxies were full. And it was raining heavily and it was dark. Welcome to our city? But the hostel was full of great people and it sort of felt like meeting up with friends. 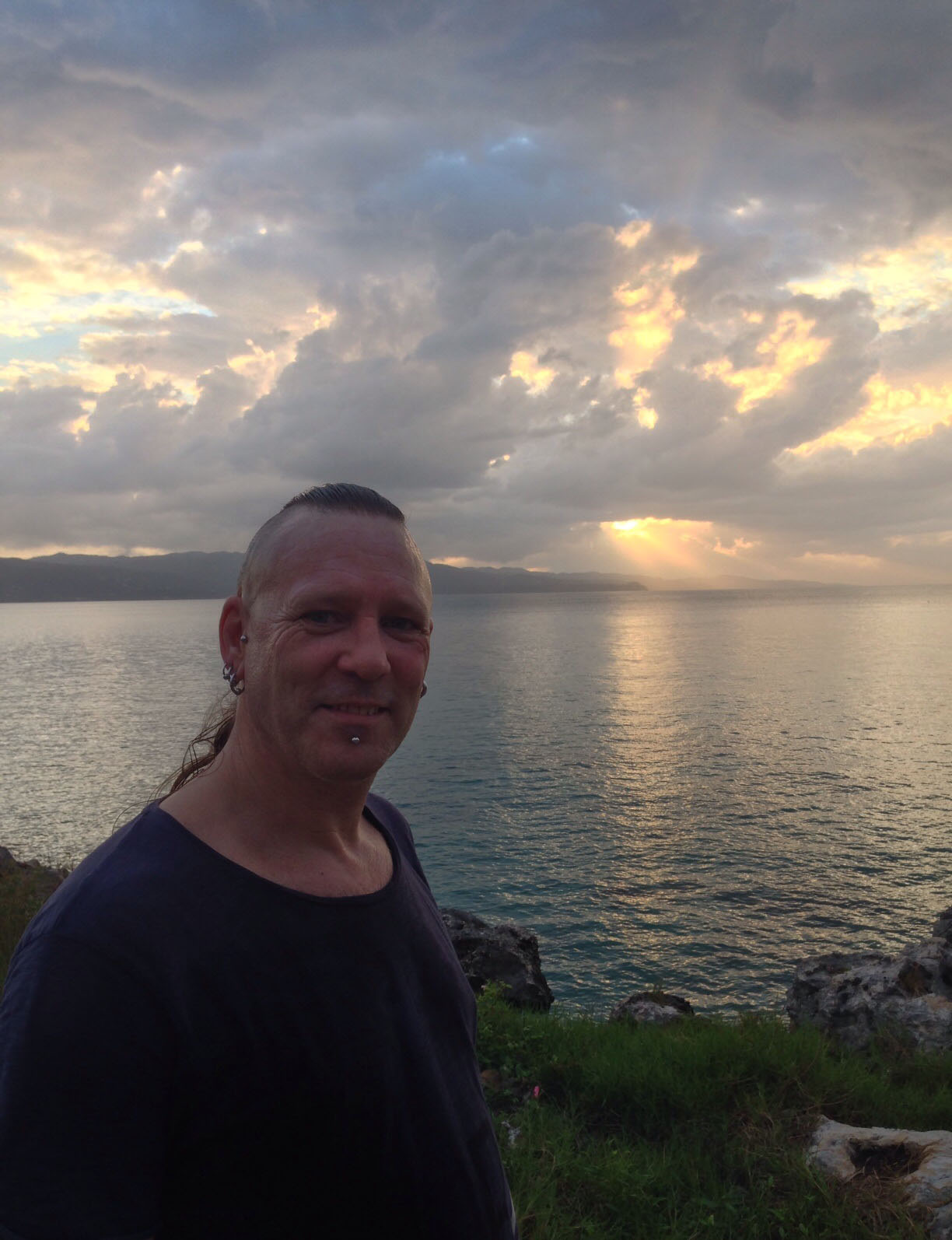 Chris and I had a good walk around Montego Bay where we solved most of the worlds problems :)One of them is Chris from Sweden. He has arrived with plans of renting a motorcycle and touring the country. Back in Sweden he is a skydiving instructor and specializes in tandem jumps. For those who don't know, then a tandem jump is where you are strapped to the instructor and you both jump out of an airplane at 4,000 meters (12,000 ft) while stuck to each other. Yes!! A clear sign of evolution! 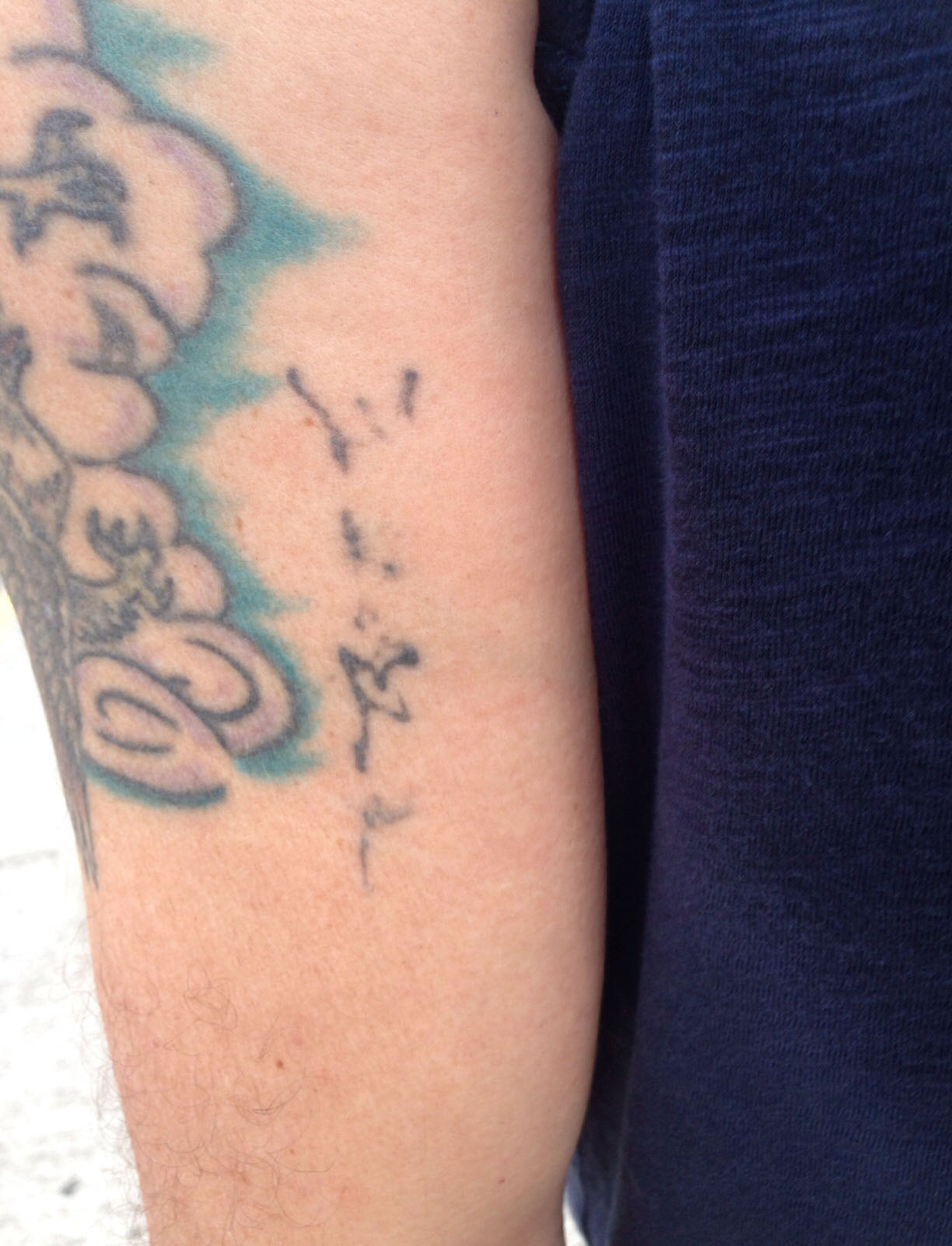 It clearly reads: WFFT. Can't you see it? :)Chris has done more than 4,000 jumps and showed me an obscure tattoo on his arm and asked me if I knew what it was? I looked at it and had no idea. Then he told me that it was supposed to read WFFT. I still had no idea? Worlds First Free-fall Tattoo. In 2007 Chris and a friend jumped out of an airplane at around 5,000 meters and had about 1 minute to make that tattoo while dropping towards the ground at rapid speed. As far as they have been able to research no one has done it before. Chris has the WFFT. 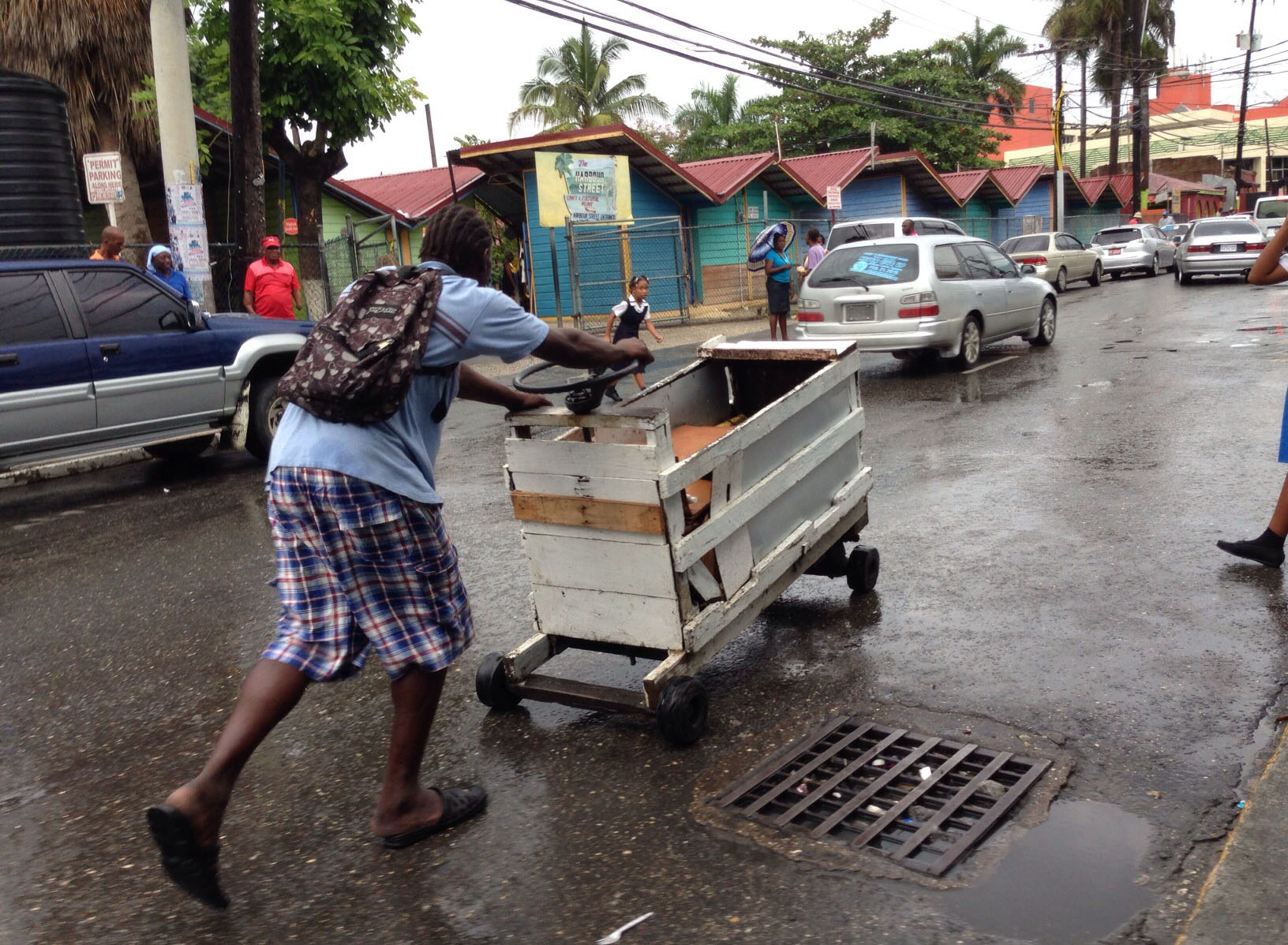 Pushcarts are a common form of transporting goods in Jamaica. And there is even a race every August! :)I have been all over Montego Bay. Speaking with the a cruise ships agent I got a lead that brought me to Caribic Vacations Ltd. First at the airport and then later at the main office. That's where I met Memuna. A beautiful woman who was born in Ghana, raised in Cuba and now works and lives in Jamaica. Her name means "trustworthy" and I have a feeling that she really is. She certainly showed me a lot of first class hospitality and informed me that the cruise ship is actually operated by a Canadian company called Cuba Cruises (http://www.yourcubacruise.com). That lead to more correspondence and eventually I was emailing with Julia in Canada. She is such a sweetheart! But if you have ever read the blog on my visit to Canada then it is no surprise. It all came nicely together and today, Friday, I am departing from Montego Bay and saying farewell to Jamaica. 1 love baby! 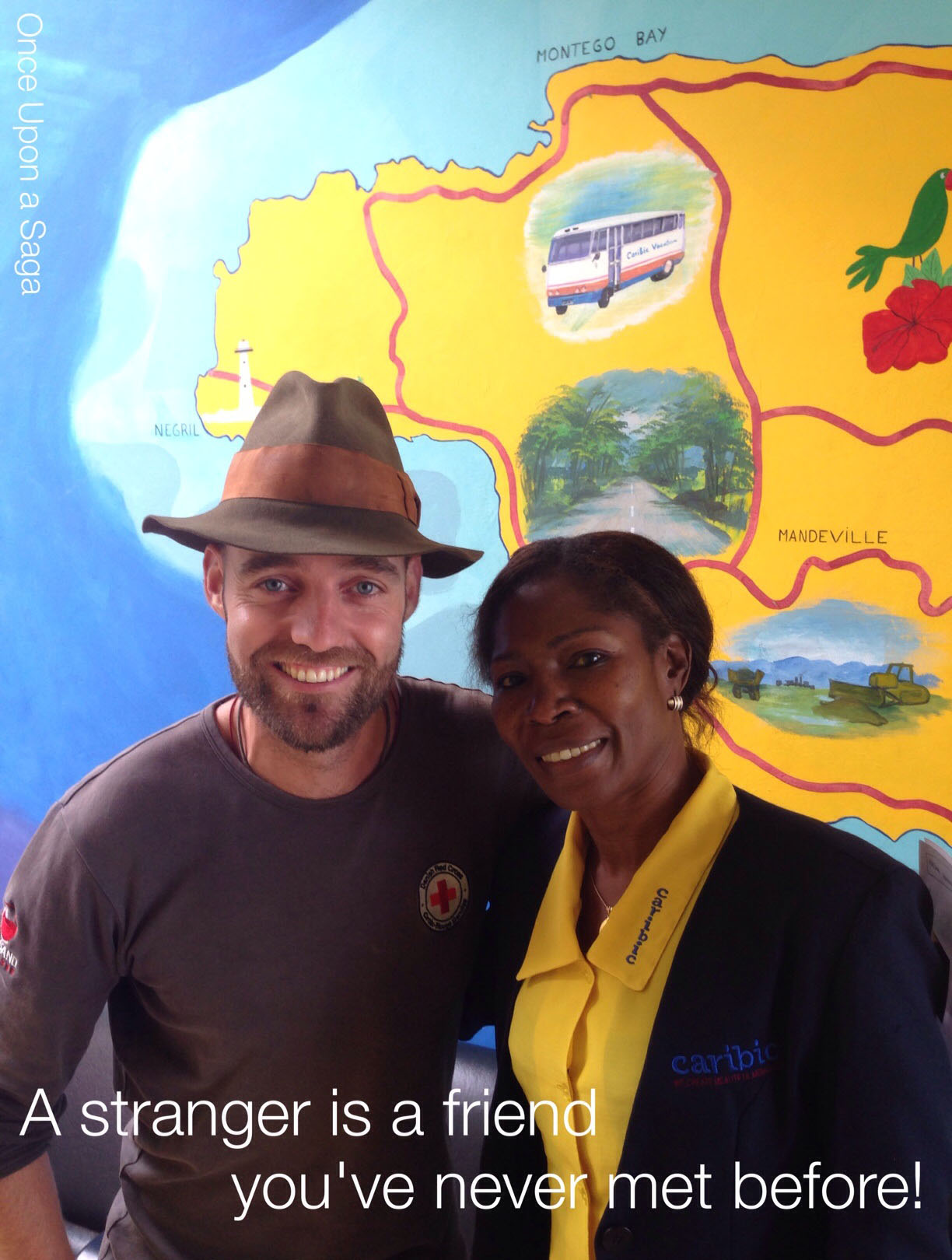 Memuna on the day she became a friend!I should arrive to Cienfuegos on the south side of Cuba during Saturday. Cienfuegos is about 280 kilometers from Havana and a bus can do that trip in about 4,5 hours. Let's see? I'm exited about Cuba because I have heard about that country all my life and I really think it's different from other Spanish speaking countries. But I'm also curious in terms of what will happen when I arrive? I have been told that I must be able to present a hotel booking to prove where I am staying. No problem? Well, I found a place online. But I couldn't search for hostels and hotels on the applications I normally use? Maybe because the applications are American? Being able to present documentation for onward travel is another thing. I can normally get around it - but I have a feeling that the Cuban immigration might not be into negotiating. The best way to document it would be to present an onward ticket. And since there are no ferries I can book then I might just purchase a flight ticket in order to satisfy immigration. "Playing the game" some have said... 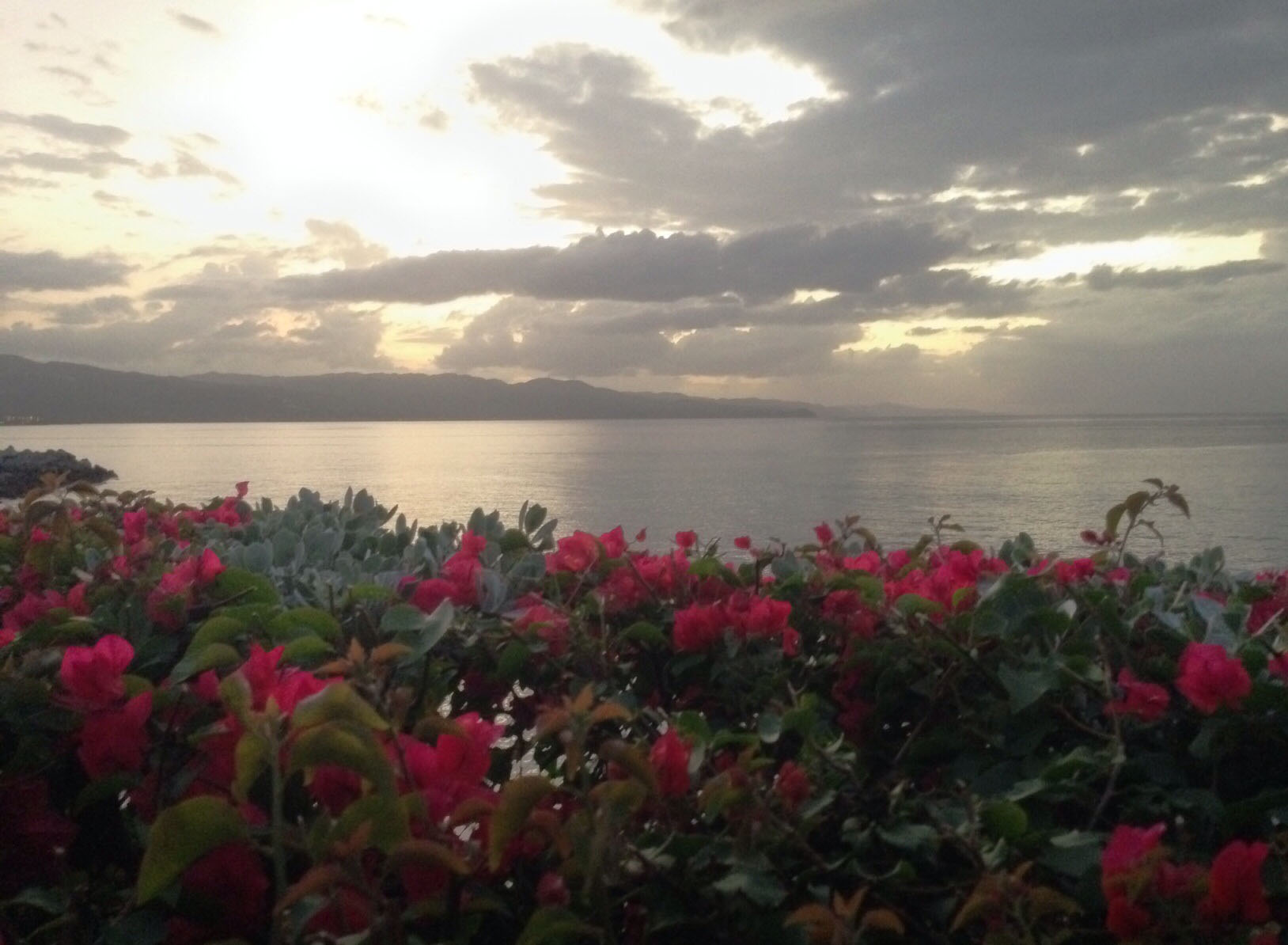 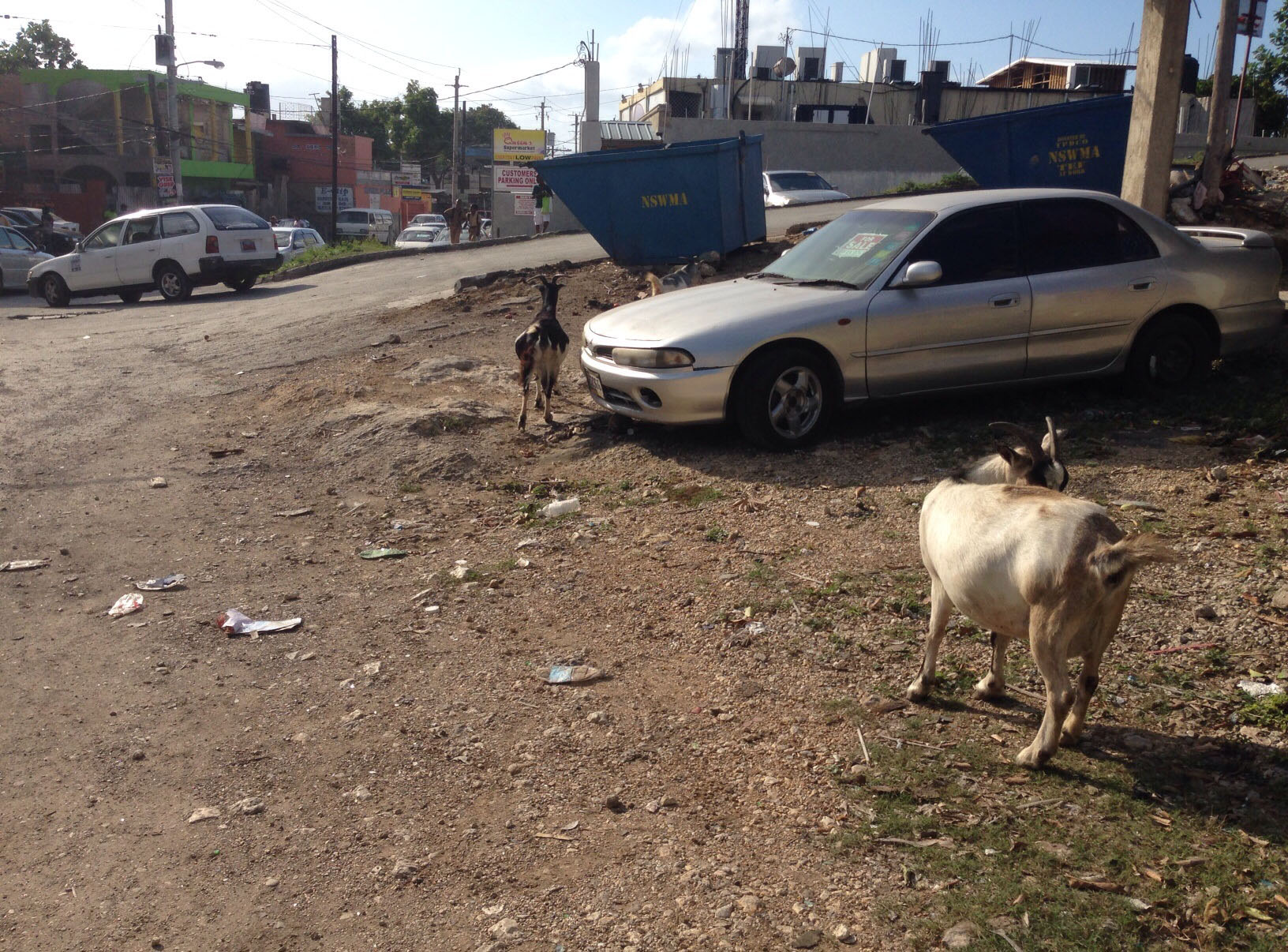 Jamaica presents its self in many ways. Like life I guess...Maersk Line has joined in on supporting Once Upon a Saga. I am honored! Maersk Line has been the largest container ship operator in the world since 1996. It's a Danish company and the captain of "Sea Land Eagle" has said I am welcome onboard and that he will bring me across to Europe so that I can reach Africa from there. The only thing is that the ship leaves on February 18th from Miami! I still need to reach Cuba, then the Bahamas and finally cross over to Miami. I however also need a business visa for the USA since regulations demand I have one prior to embarking on a container ship in the US (even though I will already be inside USA on my ESTA approval. Funny regulations). Finally I also need to present a ton of official documents and all of this while locating the right contacts to get me there on time.Oh well, it's a challenge! And I'm up for it!! :)Best regardsTorbjørn C. Pedersen (Thor) - challenged by challenges as if I wasn't challenged already :)