Bahamas from Cuba - without flying

I'm constantly forced to think "outside of the box" and that's why I'm here today.

Something which I haven't mentioned often, is that I know much more about traveling within the Caribbean, than those who live there. When I arrive in a new country and ask the locals how I can get to the next country without flying, they mostly have no idea. If there is no ferry then the answer often is: "that is not possible". And yet here I am. I have already done it. I have traveled to and from every country in the Caribbean without flying. I'm in the Bahamas which is a country in the Atlantic Ocean. I credit it to the ability of saying: " Okay, there is no ferry...then what do we have? Cargo ships, sailboats, banana boats, coastguard, cruise ships etc..."I wanted to reach the Bahamas from Cuba. And I thought to myself, long before I reached Cuba, that it might be hard. So I did some research and was often told that Cuba is a very closed country. But nevertheless I found a cruise ship which goes there once every week from Jamaica? While in Dominica I met an American sailor/author. His name is John Krechner and he advised me that sailboats frequently leave from Baracoa which is at the southeastern tip of Cuba. From there I could reach Cap Haitian and from there I could continue to the Turks and Caicos and continue up the island string to the Bahamas.

Another option would have been to go to the western part of Cuba which is closer to Mexico. From there I would possibly get a boat to Cancun, Mexico. From there I could go by bus to the US and then find a boat from Florida to the Bahamas. In fact there were a number of other options, but I invested my time in Marina Hemingway which is not far from Havana.I spoke with various dock masters over several visits to the marina. One day a dock master told me to go around and ask every boat in the marina. So with his permission I did exactly that. It wasn't looking very promising and large luxury boats are for me regarded as the most unlikely to help. But then I met: Gérald Dunavan, Ingénieur Naval, Havana. That's all his business card said. Black printing on a white card. No numbers, email addresses or any other details :)Dunavan speaks a large number of languages, there was a Volkswagen Beetle onboard his grandure boat, and he is the owner of 6 boats in the Marina. He immediately invited me onboard and I quickly kicked off my shoes. He served me a cold drink and said: "I can get you to the Bahamas. No problem!" Then we went for a walk in the Marina while he pointed at various boats and told me about the owners and the various boat qualities. It all seemed a little surrealistic to me. Dunavan stopped and pointed at a boat saying: "That one there is probably your best option. Go and talk to the Captain. Tell him I sent you". 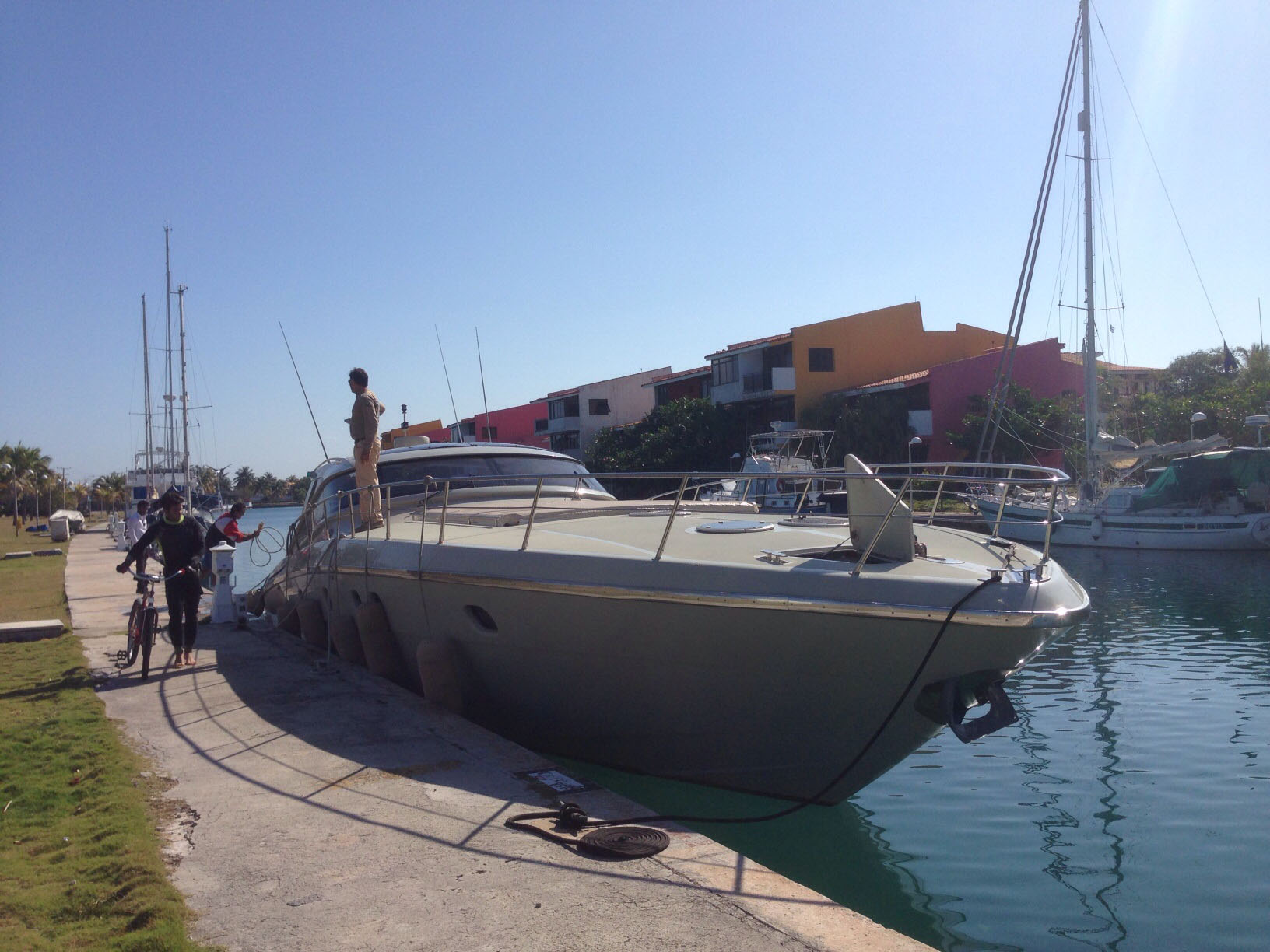 He was pointing at a 63 foot high performance yacht which had its name, "KORE", on it with large letters. I said goodbye to Dunavan and quickly made my way over to the boat where I met a young man from Bahamas. His name was Jonathan. Jonathan called the Captain (Ciro) who appeared from down below. Ciro is Italian in the way you portray Italians in movies: He speaks a lot, he has a strong charming Italian accent, he smiles a lot and is absolutely full of life!! He is something of a mix between Robin Hood and James Bond. Robin Hood in how he helps Cubans left and right by tipping, assisting and helping them with gifts and money. James Bond in that he lives an (at first sight) extravagant life as the Captain for an extraordinary wealthy owner. It's a seemingly classy lifestyle with an element of secrecy about it. It turned out that the owner is one of the most wealthy people on the planet and has been rated as number 7 on the Fortune 500 list. 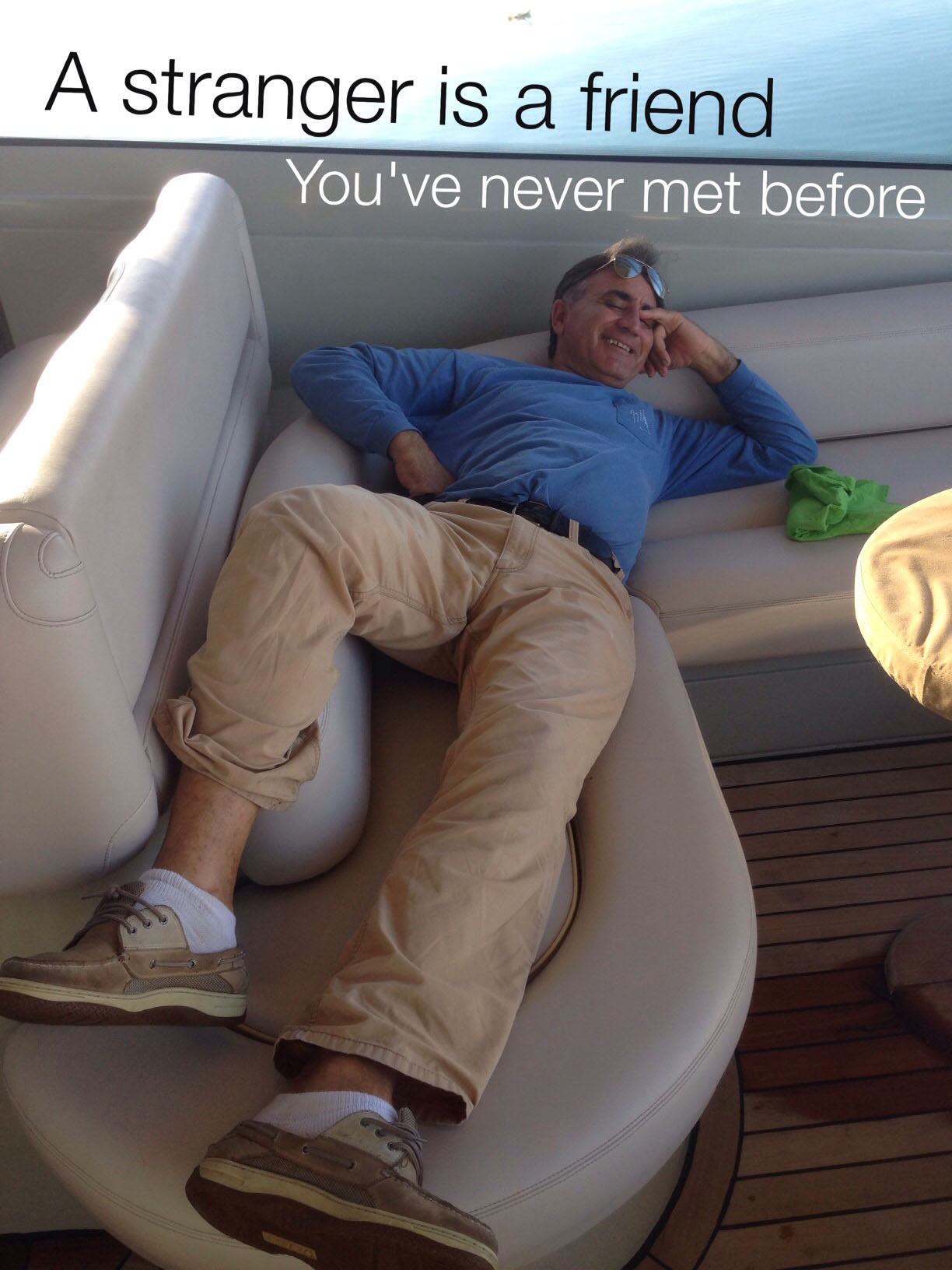 Captain CiroCiro listened to me, had no idea who Dunavan was, and wanted to help me straight from the beginning. As he said: "People don't help other people anymore. I want to help you!" 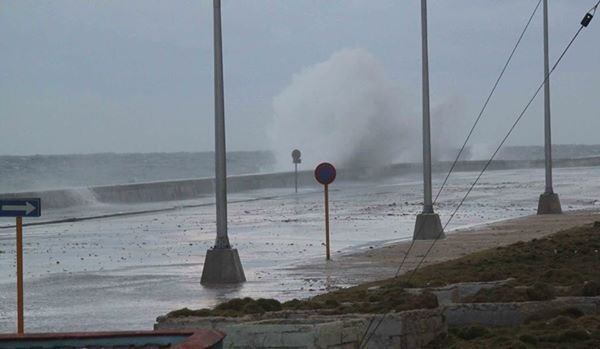 Then over the next few days we waited as the weather got rough. No boats were leaving the marina and the days went on and on and on... 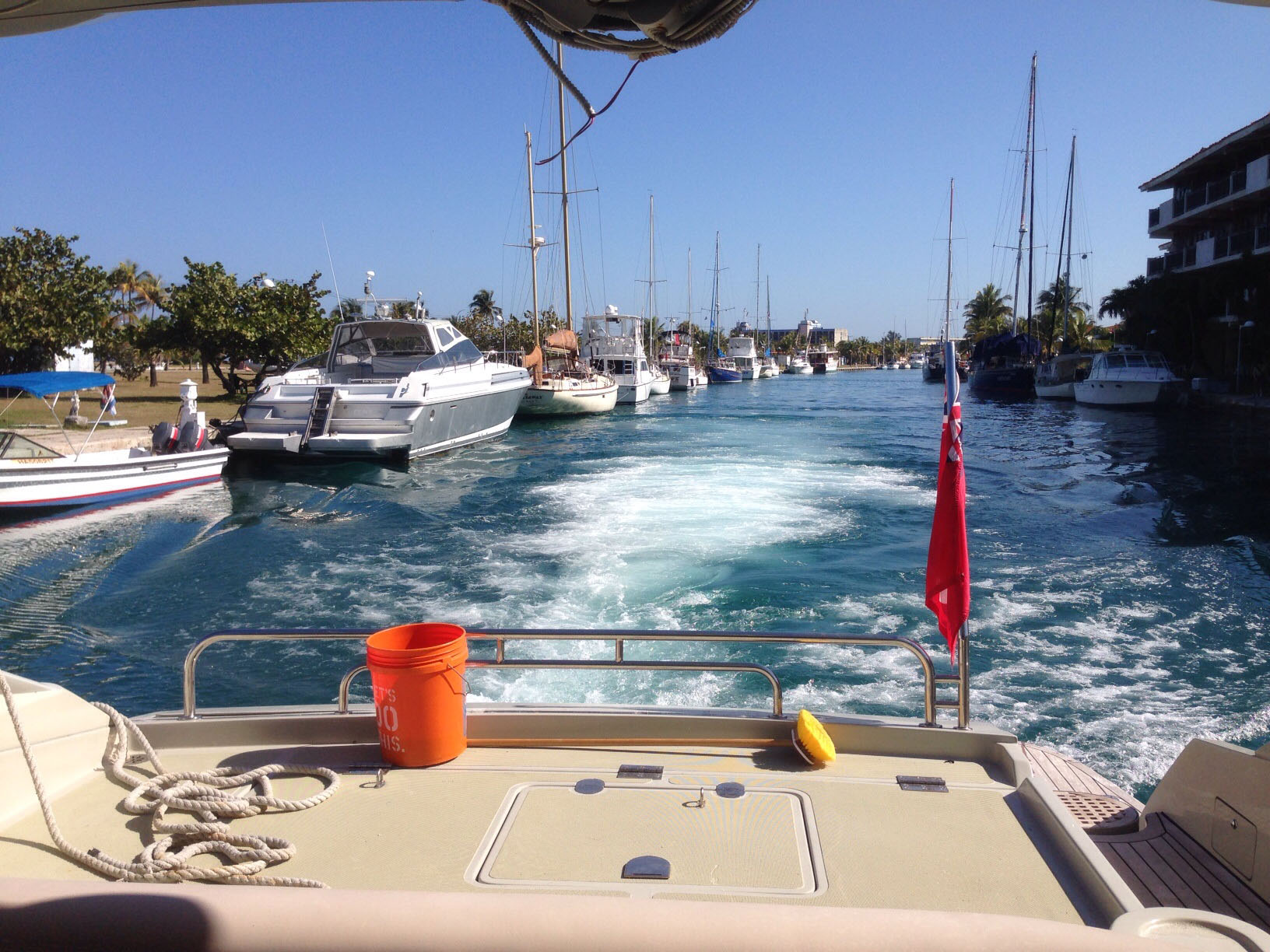 Finally the day came and we left the marina. Ciro had been out all night as he knows some of the more glamorous places in Cuba and often gets access to places and people that most people only dream about. Before he became the Captain of the "Kore" he was a Captain of a luxury yacht which frequently was hired by "A-class" celebrities. I've heard stories but have promised not to tell. I'll tell you this though: When I can recognize the names of the celebrities they are very famous! Because I'm not hip enough to know anyone :)After the weather settled we left Marina Hemingway and set our course directly towards Valadero which is a Cuban town further down the coast but closer to the Bahamas. There we would refuel and continue to Cat Cay, a private island...But because of a lack of electricity at Valadero the pump could not operate and we had to stay the night in the new marina. Cuba was obviously holding us back. Cuba is a country where you do not necessarily trust that the flick of a switch will turn on the light. But it might. In this case there was some suspicion towards that someone might have stolen the diesel from the generator which is not completely unheard of. Valadero Marina, by the way, is quite extravagant in comparison to anything I have seen in Cuba. It's a marina complex with restaurants, shops, bars and what not. It looks very European...or American...or anything but Cuban. And as Ciro said it is a sad thing - which I agree... 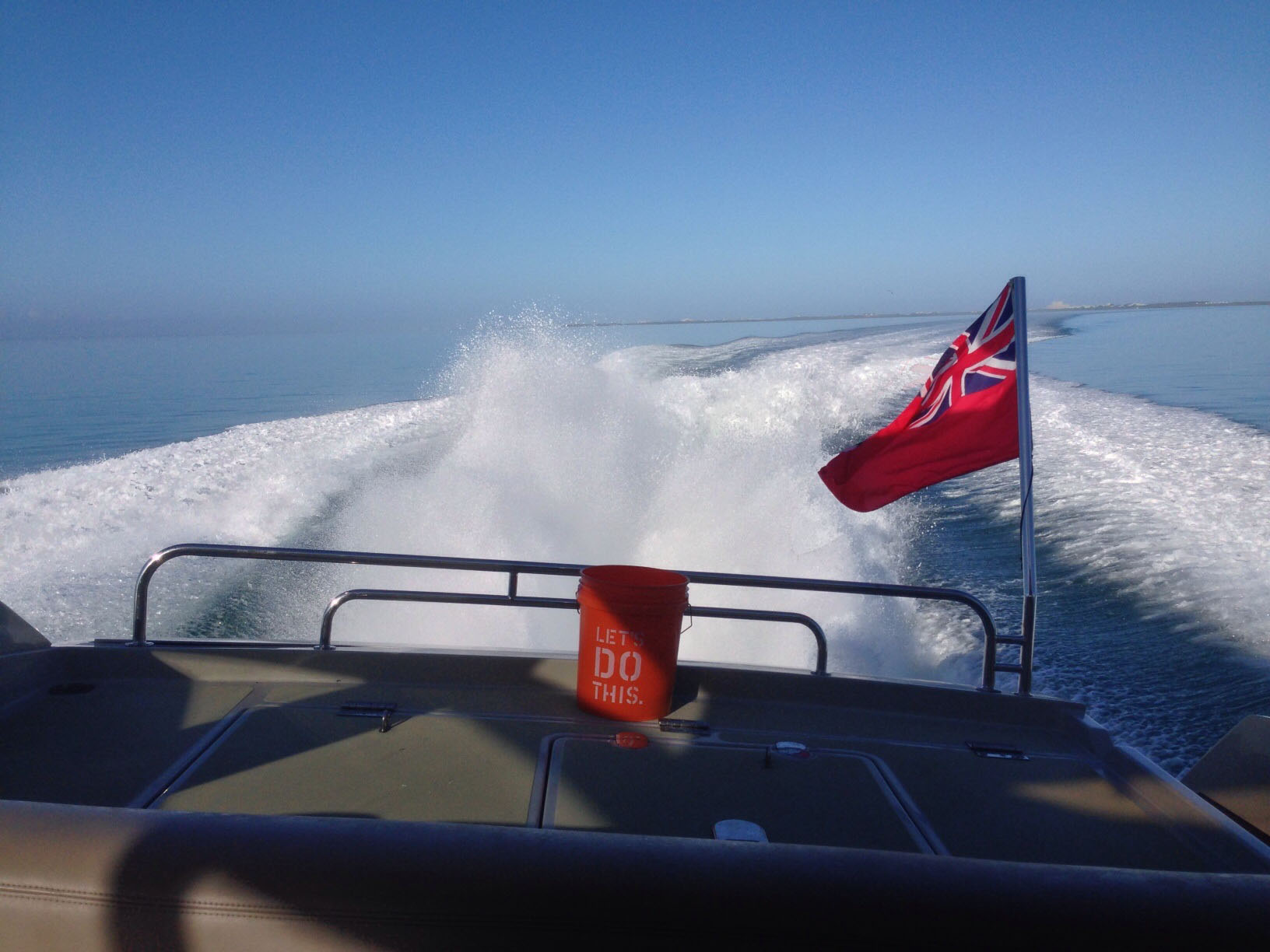 The "Kore" is only a tender vessel for another yacht. That is to say that whenever the owners of the bigger yacht want to go to land or have a cruise around the area they are in then they get into the smaller yacht (Kore). Which in fact is so big that it can not be onboard the bigger yacht as tenders normally are. Instead it follows the bigger yacht. That really tells you a lot about this particular family. 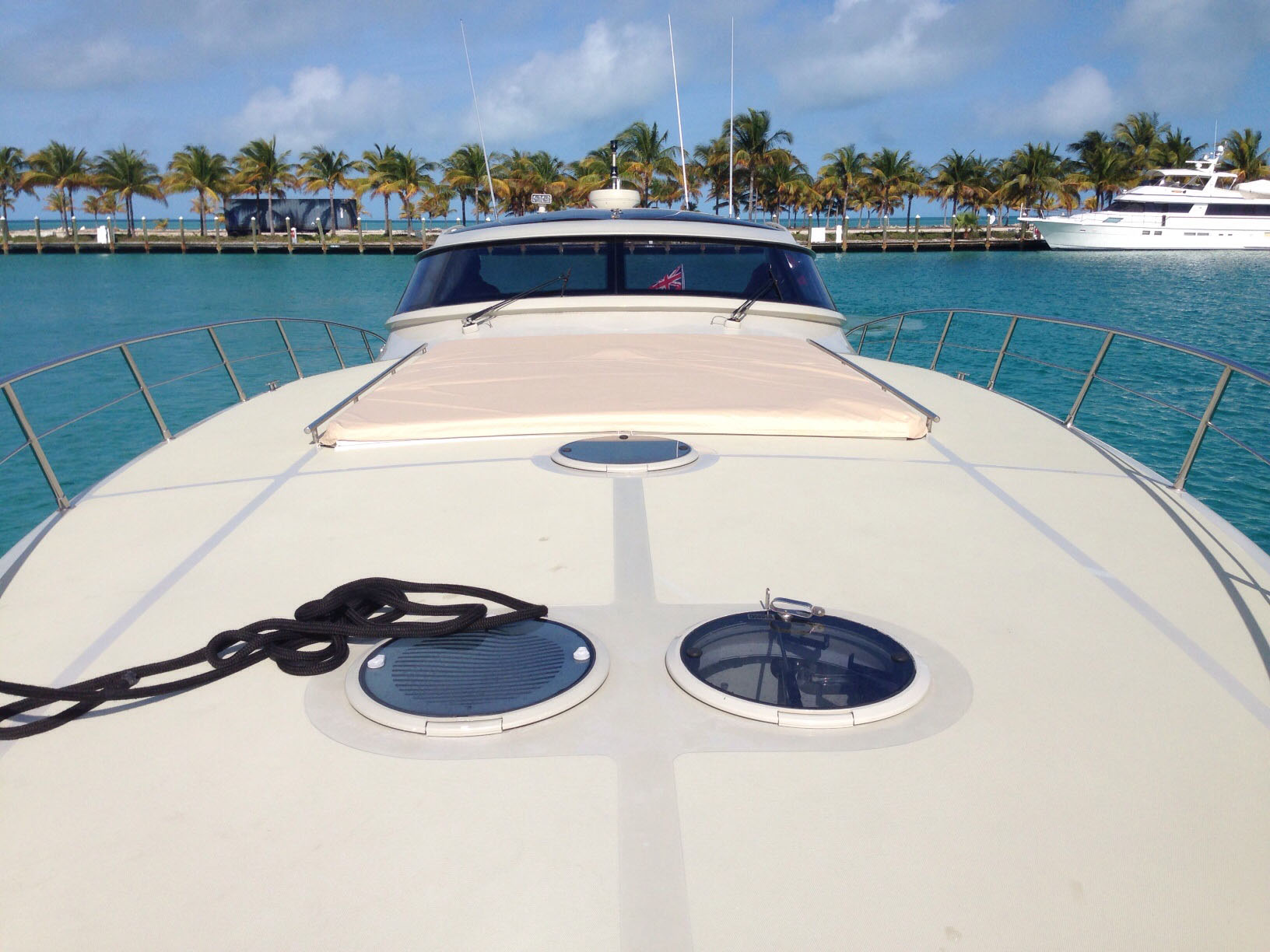 We arrived at Cat Cay, Bahamas, the next day and the water was picture perfect. Cat Cay is a very small island south of Bimini. If you look it up on google maps then it will show you no roads or houses. Simply the outline of the island and it's name. Perhaps because it is a privately owned island. It's a beautiful island although it is very artificial. It's the kind of place where you can put your wallet on a table and walk away without worrying about it being stolen. 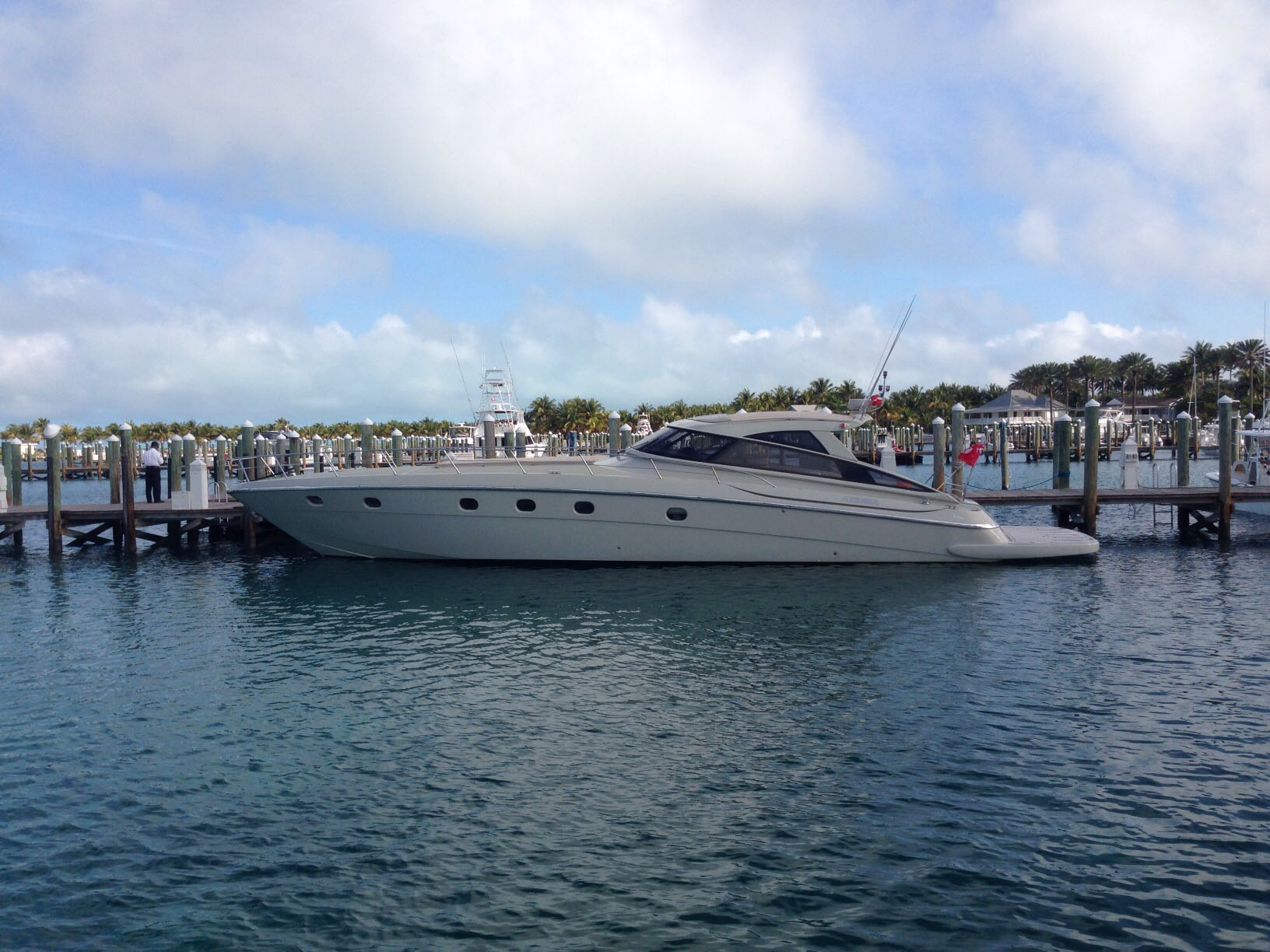 I have spent every night since I arrived onboard the "Kore". In fact as I write this I am still onboard. I have the boat all to myself. Ciro left for Miami a few days ago. That's the kind of trust I have received. Jonathan however is in charge of it and checks in on me from time to time. 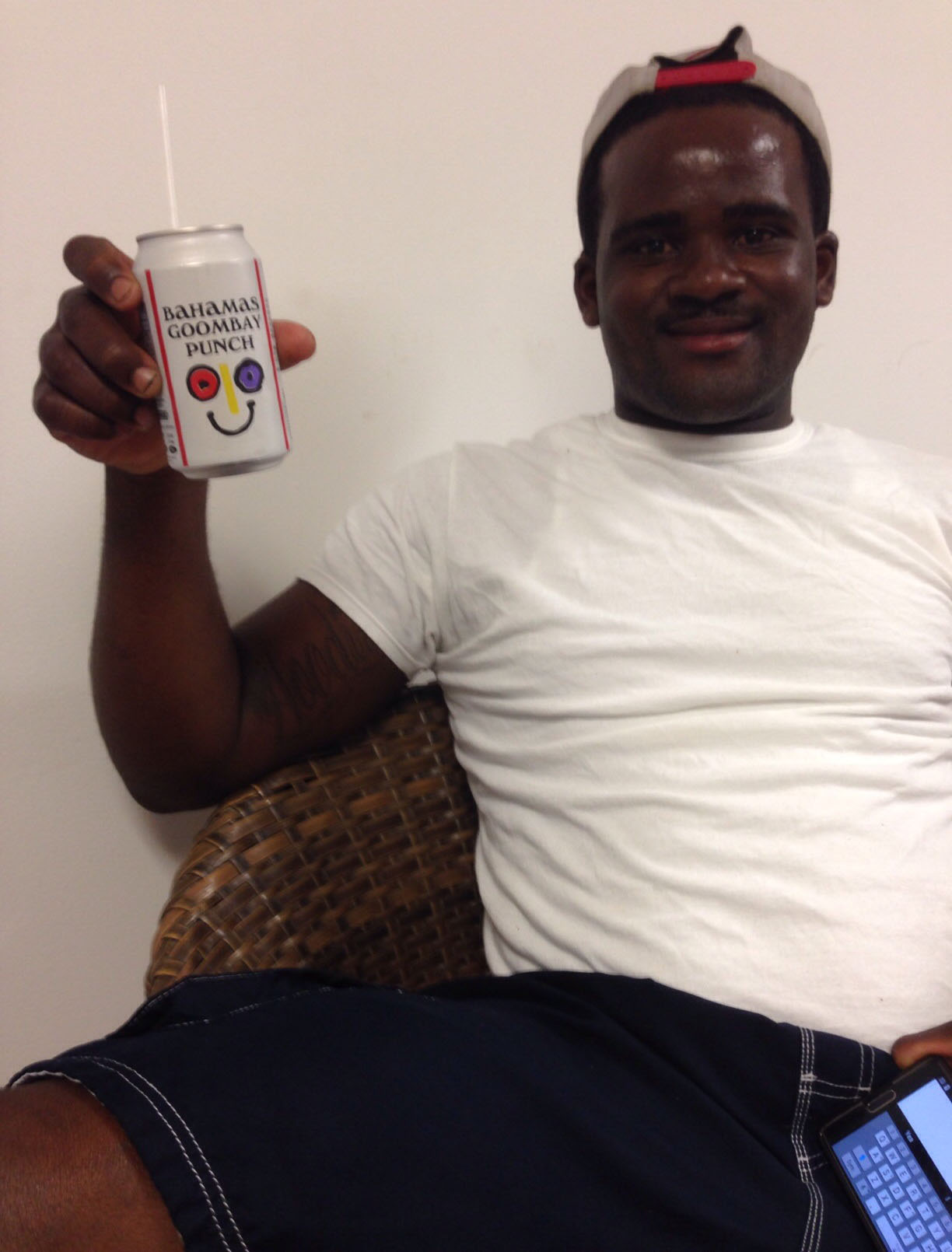 JonathanJonathan is an extraordinary 25 year old who lives and works on the island. I met him for the first time at Marina Hemingway shortly before he flew back. He may only be 25 years old but he is much older than that if you measure by life experience. Jonathan does gardening for the family within their huge territory and helps out with the boats (they have a lot). The house used to be owned by an American president, but nobody remembers which one because: "He was only a president". The current family is valued at usd 4 billion. I guess with that kind of money you could buy a Ferrari...or 10...and set fire to all of them just to watch them burn. Afterwards you wouldn't even notice that you had spent any money. 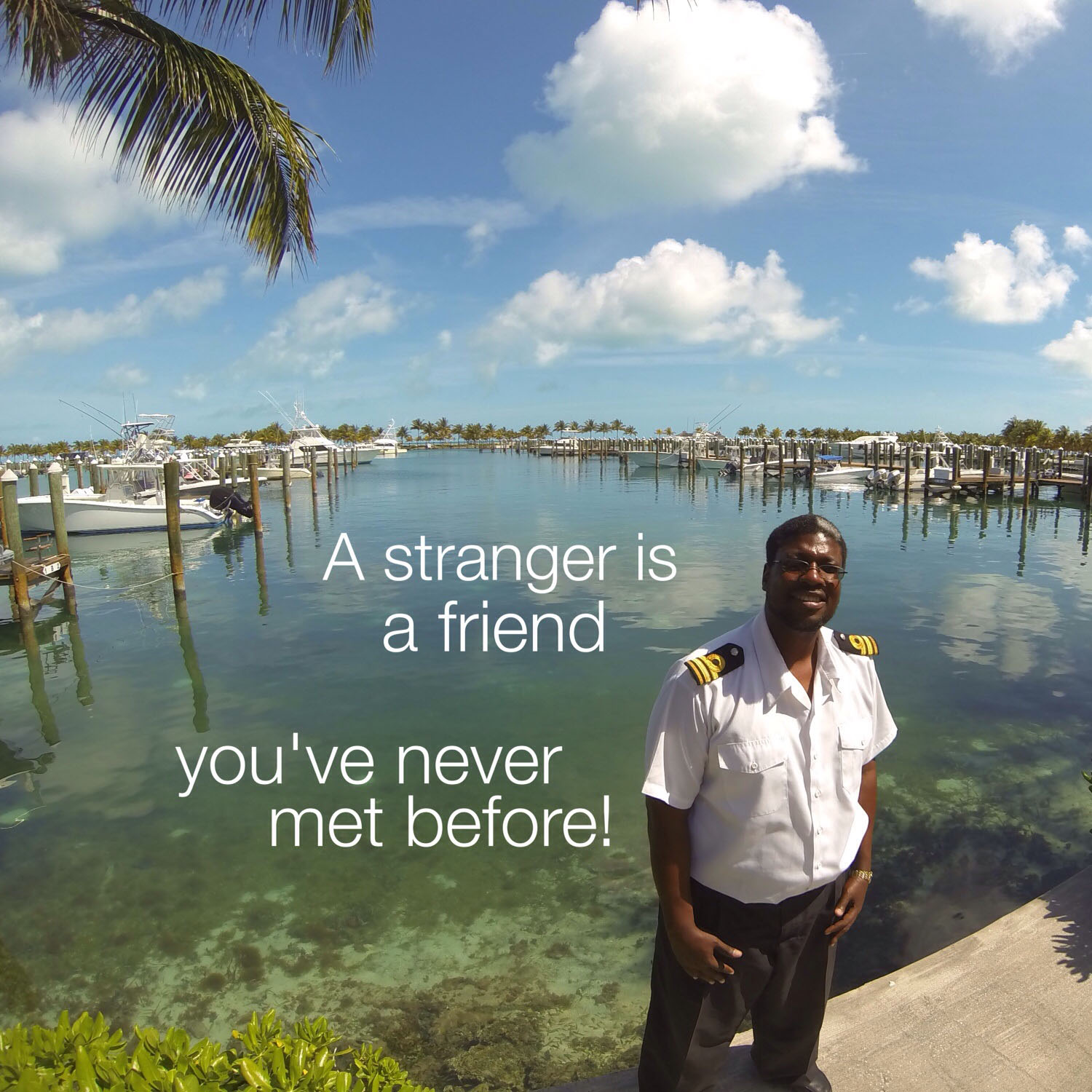 CarltonI was introduced to Carlton Bowleg who is the customs officer in charge on Cat Cay. He looked me in the eyes with a smile on his face and said: "I'm gonna get you to Nassau"! He has been an amazing help and he came up with a plan to get me from Cat Cay to the nearby island of Andros. Carlton's father, who is the Captain of the mailboat, could get me to Nassau. Unfortunately the weather changed and it got too rough for the 2 hour boat trip to Andros. So I'm still on Cat Cay. And still living inside "Kore". You see, the family is currently not on the island. They simply use the Cat Cay residence as a weekend "get away" once in a while. Who knows how many houses they have... 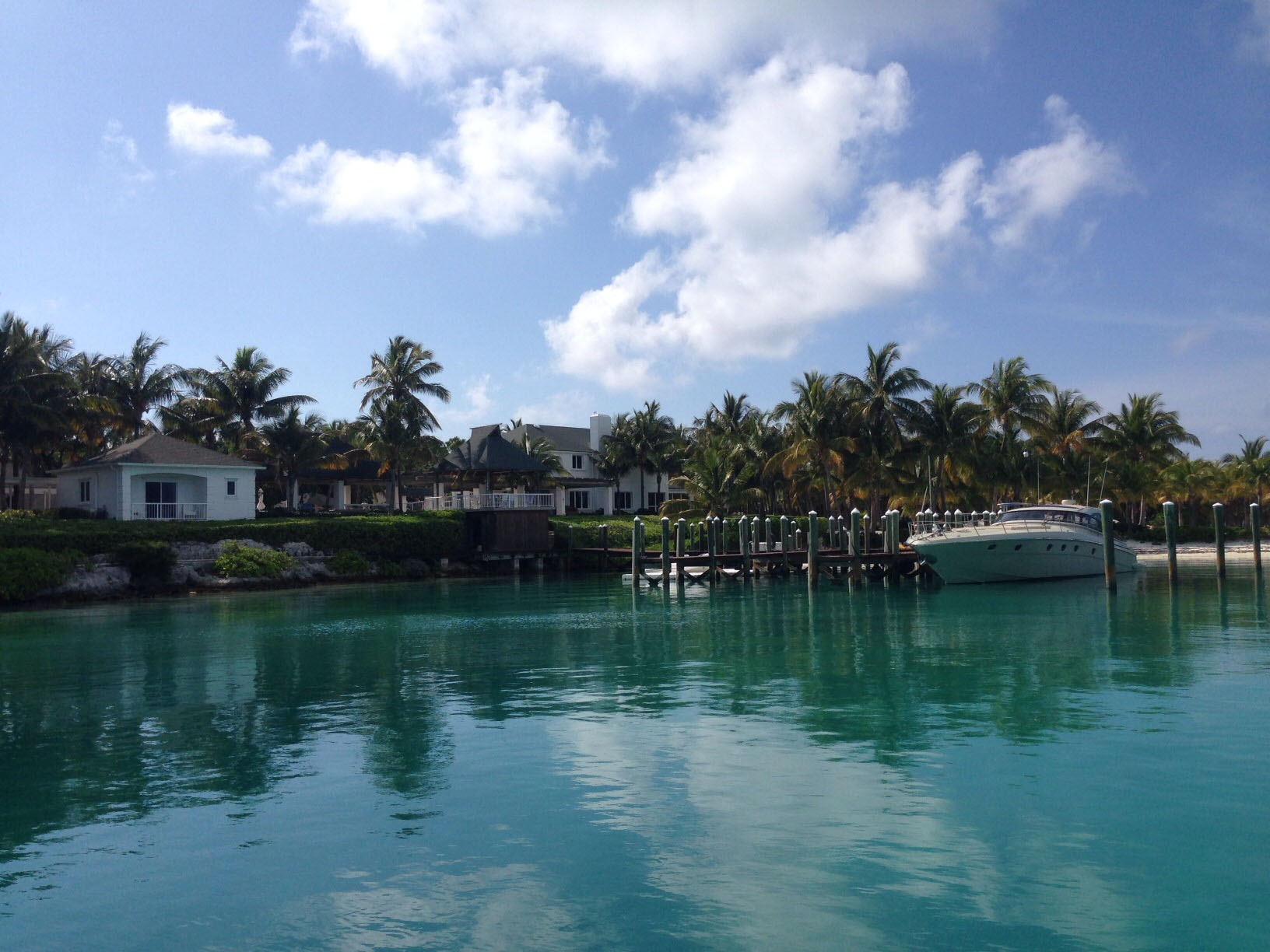 The weekend residence. Probably 1 of many."Plan B" is that I leave Sunday from Bimini on the scheduled ferry to Miami, USA. Then I find a bus to Fort Lauderdale. Monday morning I embark on a scheduled vessel to Freeport in the Bahamas. Later that day I will embark on another vessel to Nassau where I will arrive Tuesday morning. It's not the shortest route but it is perhaps the most reliable way to get there."Plan A" is to embark on any vessel (between now and Sunday) that comes to Cat Cay or Bimini and continues to Nassau. 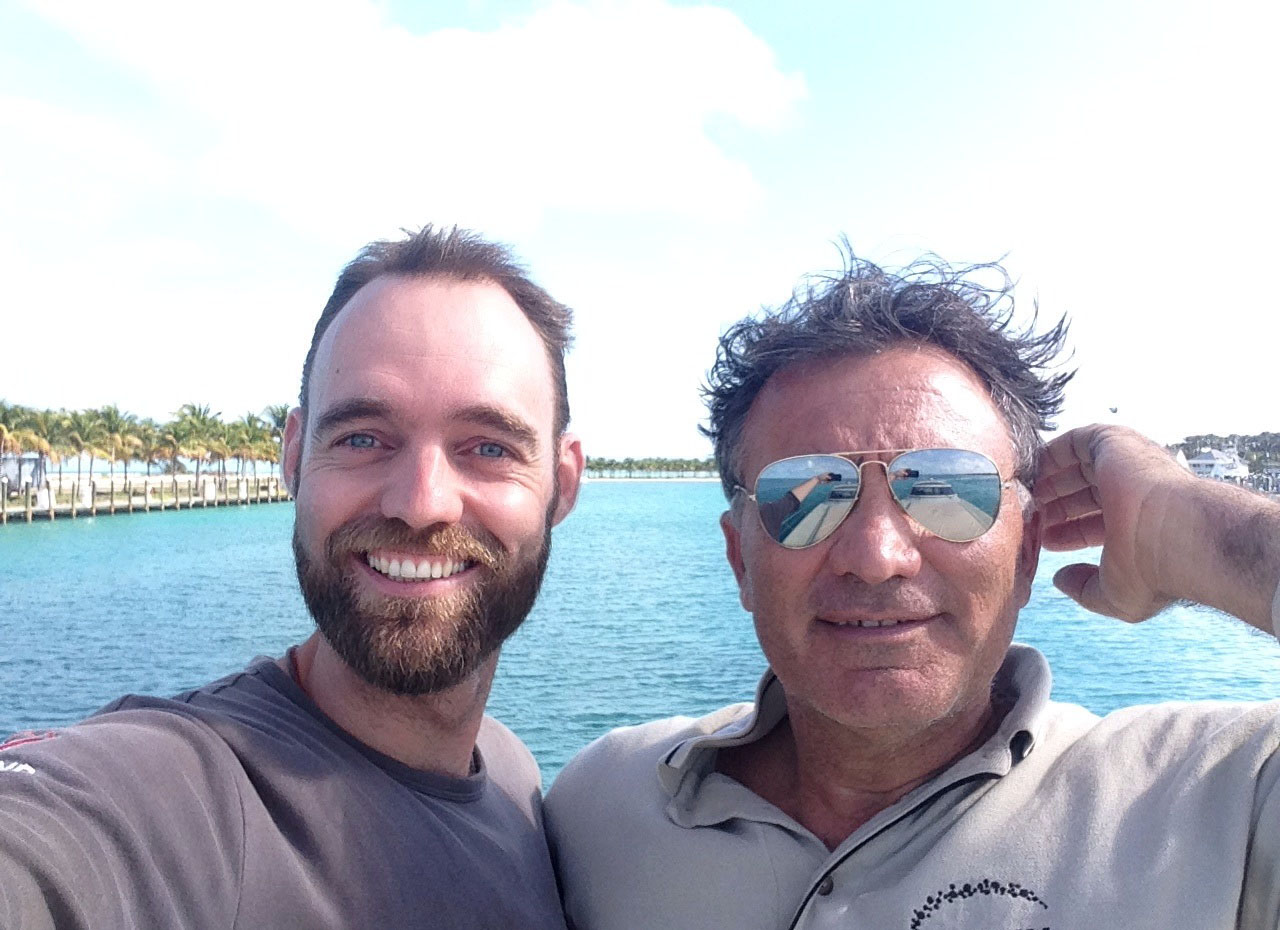 Ciro and I.When you think about it I have lived with people ranging from poor, to rich and now the super rich. And I have done it all on an average budget of usd 20/day. I guess it proves perfectly that what you have in your pocket does not decide where you go in life... 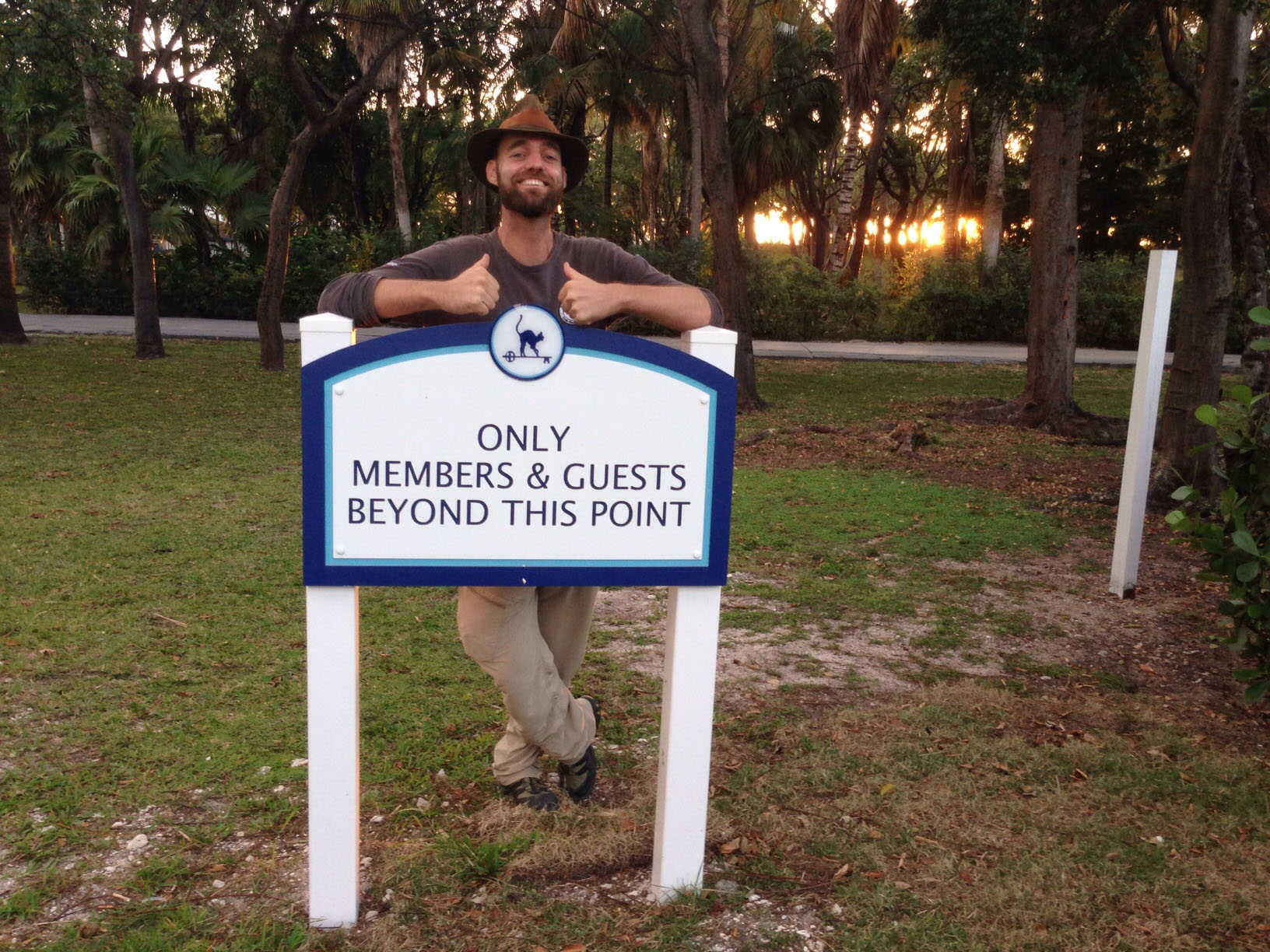 Best regardsTorbjørn C. Pedersen (Thor) - going where I never knew I would.