View Comments
There is not a lie on this planet that will not be told to you at the border to Senegal.

I had made my way from Nouakchott in Mauritania to the border city of Rosso. I arrived in a shared taxi which almost had enough space for my legs and if I had been a head shorter then the roof of the car would have been no problem either.

Mauritania is a lot of desert. But where the desert ends Senegal begins. A river divides the two countries and it immediately becomes more lush on the Senegalese side. Two ferries transport vehicles and goods across the river every 15-20 minutes and it is free for foot passengers. However that does not stop people at the river from telling you that it is much cheaper to cross in their little pirogue boats at a fine price. A random fellow in a dirty T-shirt came to tell me he was police and that I should follow him. Nonsense! I asked for some identification and then he gave up and walked away. Lies are told about how customs on the Senegalese side will confiscate my Mauritanian currency...so I would do best in changing it on the Mauritanian side. Lies, lies, lies.... 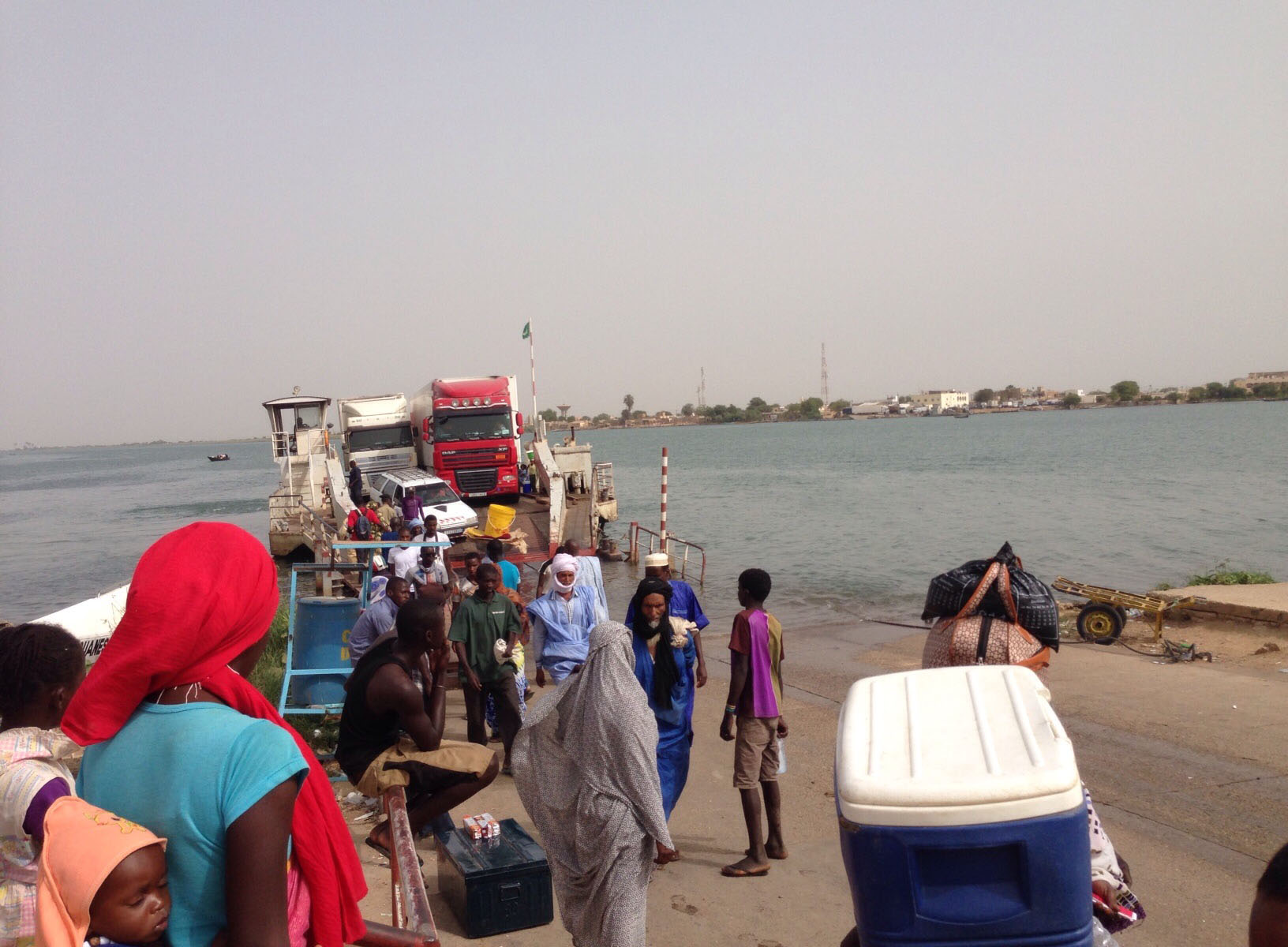 I walked onboard the ferry as soon as it arrived and a few minutes later I had arrived to Senegal on the other side. An immigration officer immediately spotted me and showed me to the immigration office. It couldn't have been easier. However you are required to buy a €50,00 visa to enter Senegal and they will not accept USD. Naturally there are plenty of helpful souls who are ready to exchange whatever currency you are carrying at a favorable rate. Favorable to them of course. 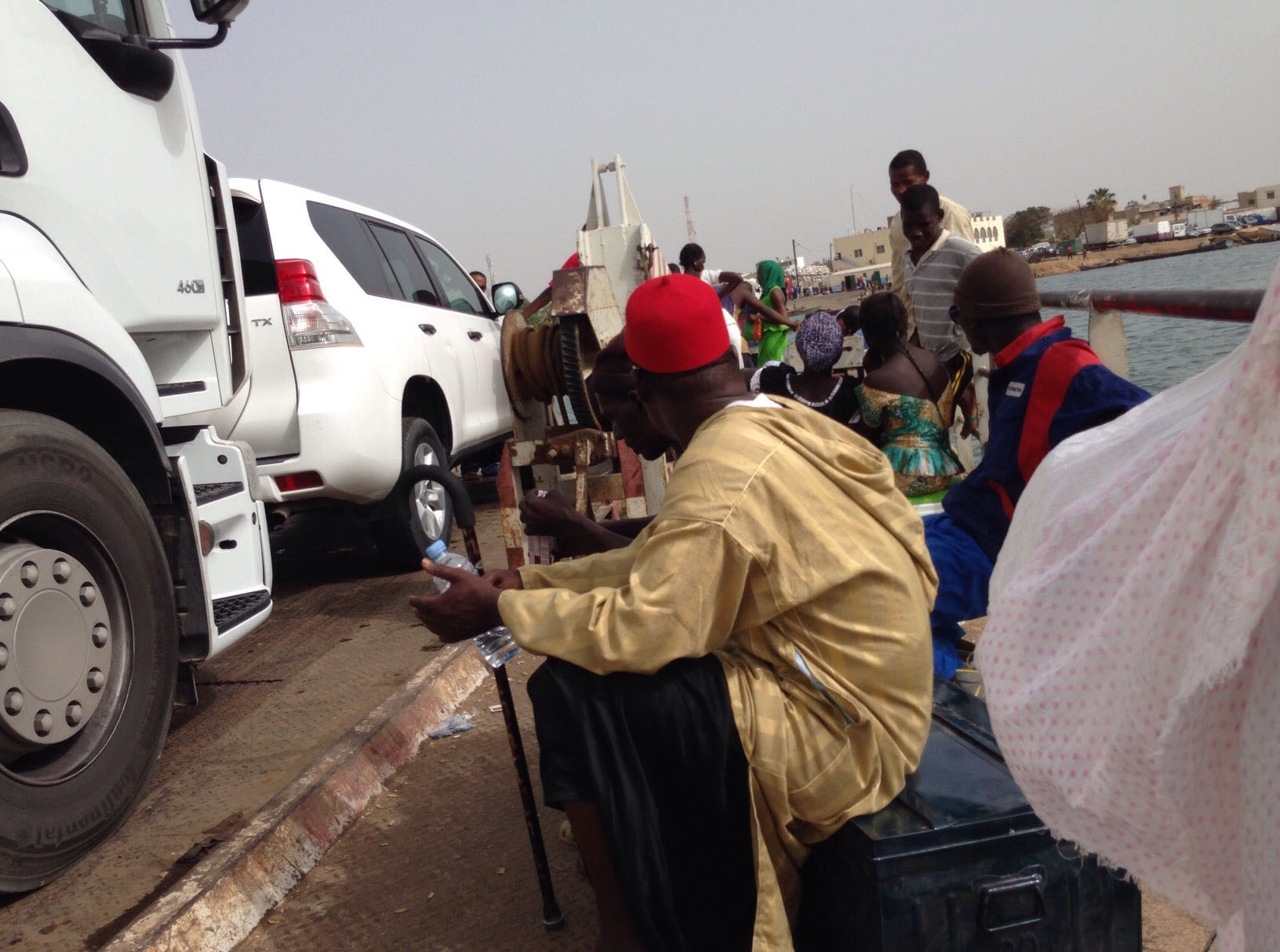 The immigration officer in charge, Gottfred, couldn't get the biometric visa system to work. There was something wrong and he was waiting for a technician. Gottfred wanted me to buy my visa at the border but then travel to a "nearby" airport only 100 kilometers away to arrange for the biometric procedures. I explained that I would have additional costs in that which were not lucrative to me. Then he told me to wait as the technician was now on his way. An hour later we discovered that the "technical problem" was an ink cartridge from the printer which had gone empty. A few hours later it had been replaced. 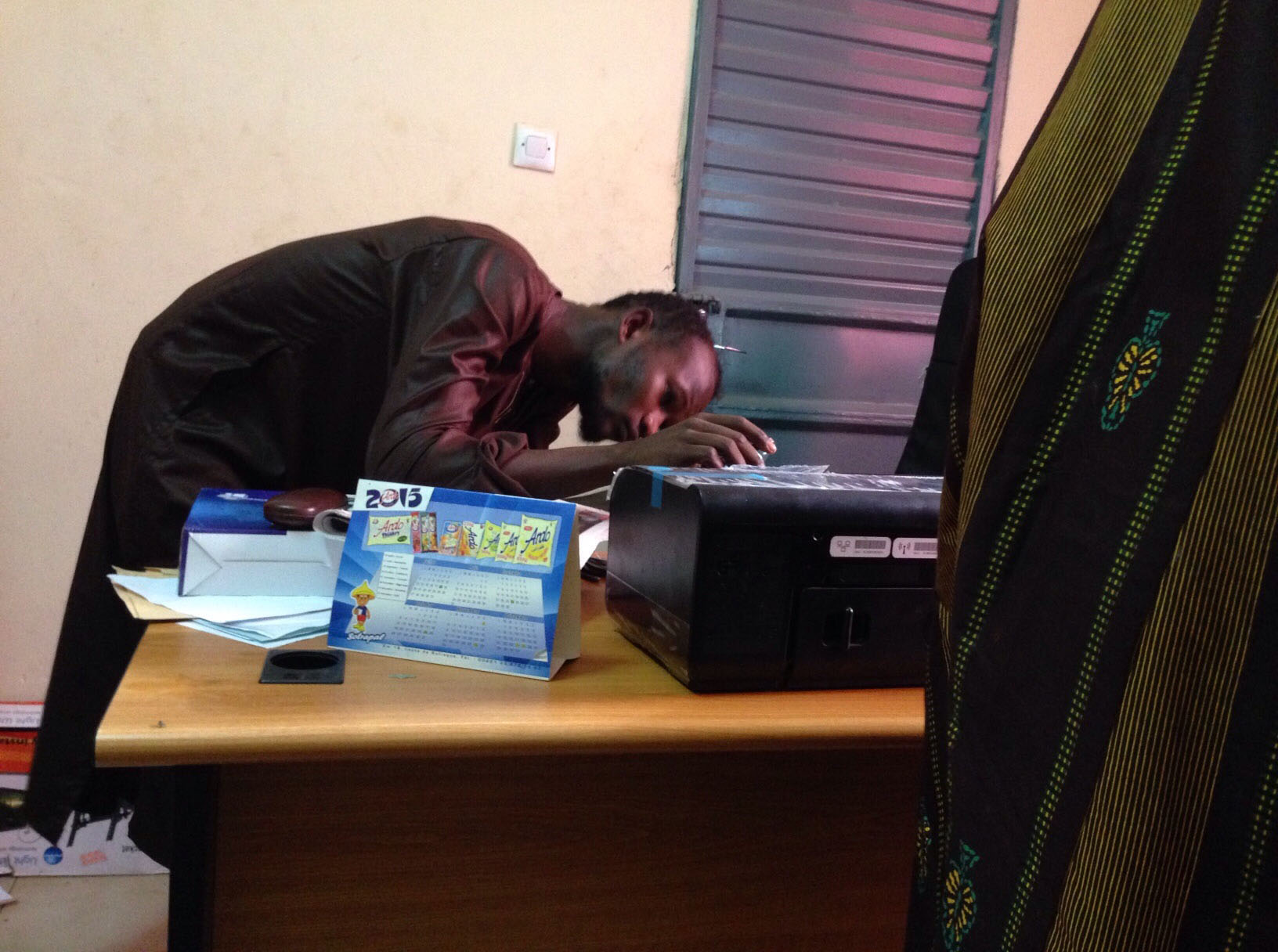 Another shared taxi got me to Dakar which is the capital of Senegal. It was 2am and dark. Exactly the opposite of my preferred conditions for arriving to a big city. A group of taxi drivers at the transport centre were happy to offer me crazy prices. I knew where I was going and it wasn't far away. But it was too far to walk. I had bought a local sim card and I had already been in touch with my couchsurfing host in Dakar. Eventually after some hardcore negotiating I managed to obtain a reasonable price from one of the taxi drivers. And around 3am I was on the right street corner. Askey, a Baye fall, was ready to host me and didn't mind the slightest bit that I arrived so late. He explained to me that he normally went to bed really late anyway. Besides he just arrived from a concert which had ended. A Baye fall is in many ways similar to the Rastafaris. He says "yeah" a lot. Yeah. 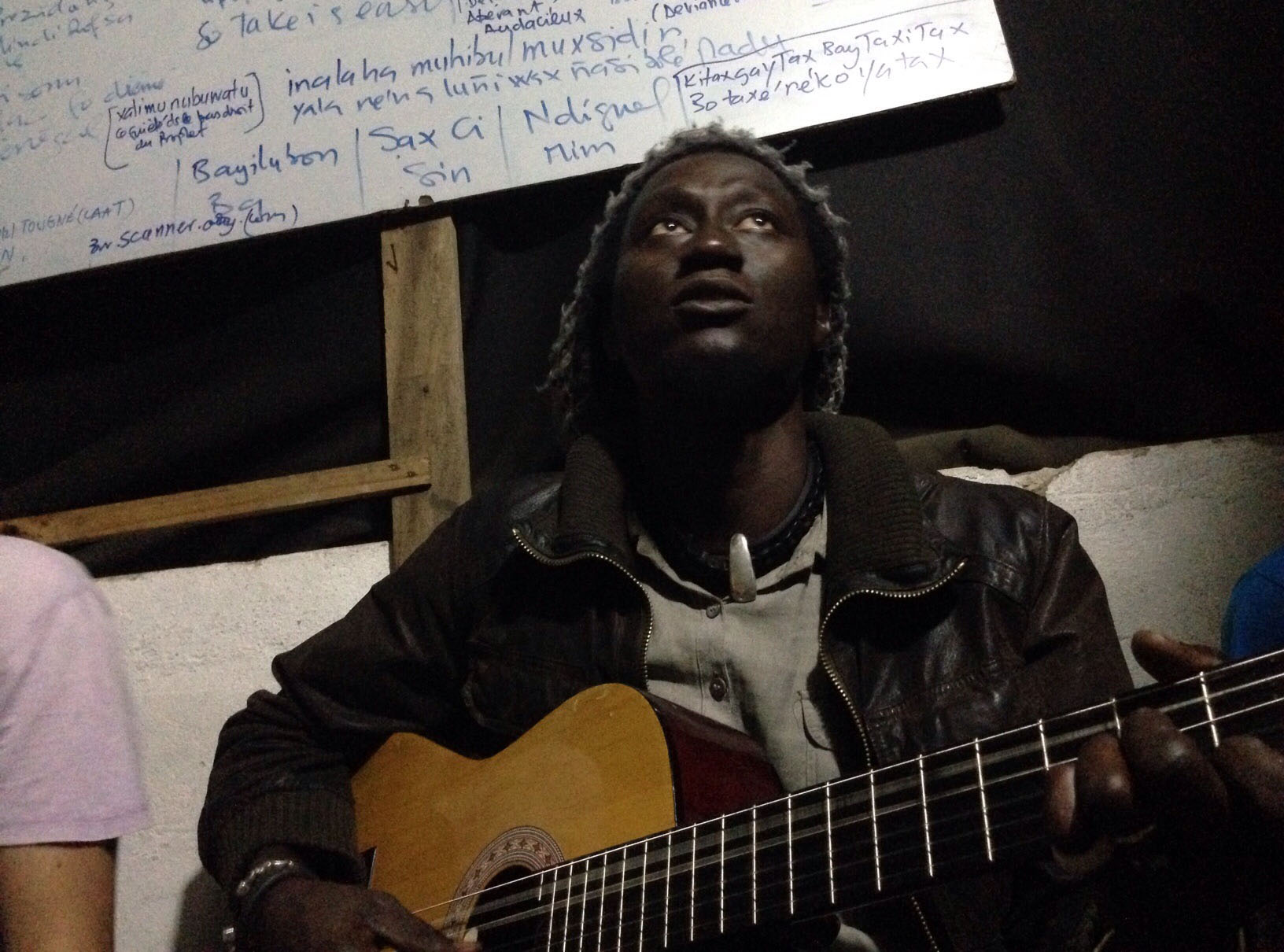 Askey is an extraordinary good ambassador for his country. Everyone should meet someone like him. Yeah. He is very talented with a guitar and hides his long dreadlocks underneath a beanie. Askey lives on a rooftop. Yeah. He manages the building which belongs to his uncle. Yeah. There are around 55 rooms in the building so between music school and managing the building he has a lot to do. But he still manages to sleep late almost every day :) 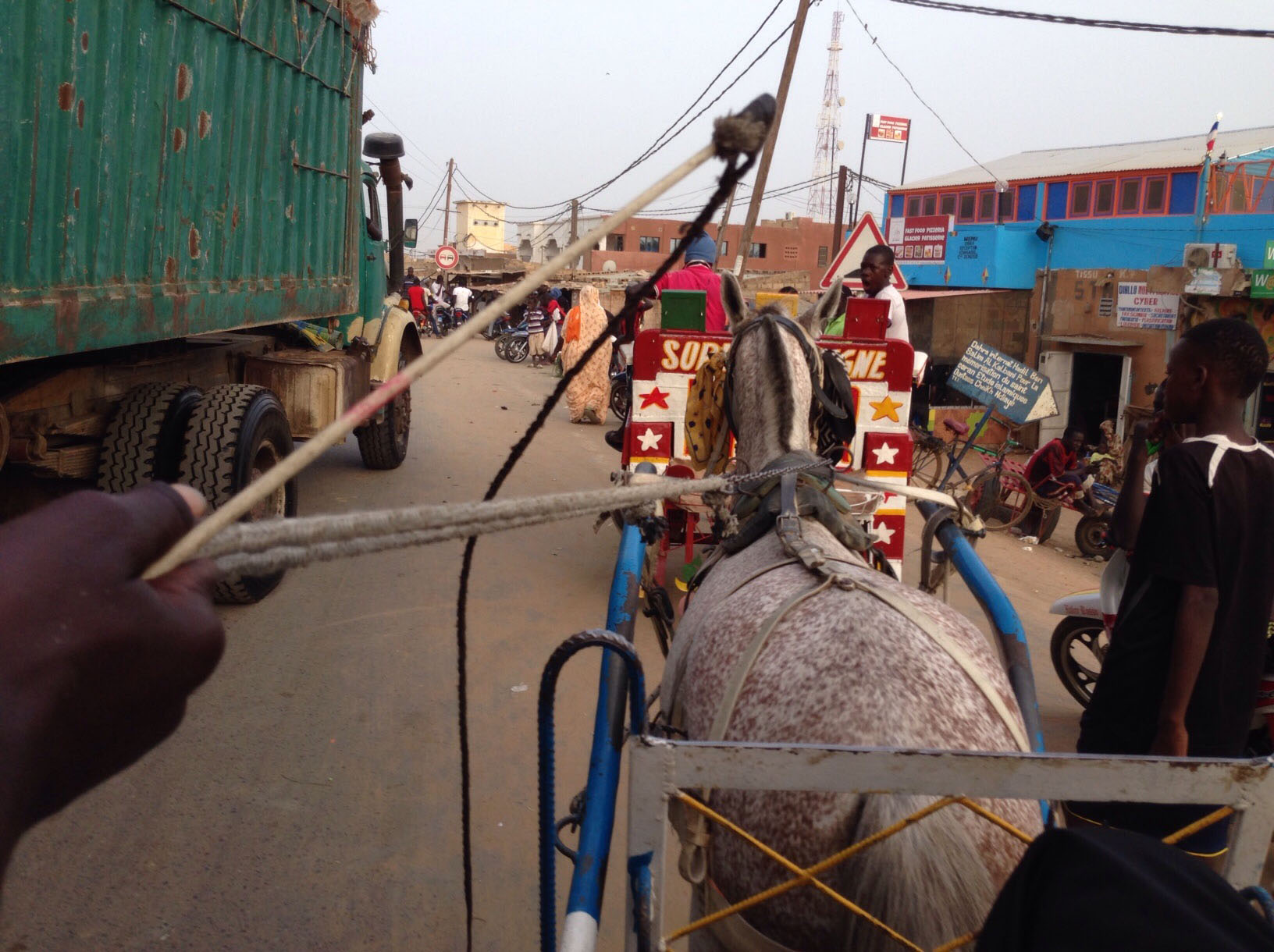 People in Senegal are very beautiful. I think you can find beautiful people all over the world. But some countries seem to have more. Senegal is one of those countries. Most people have very beautiful skin as if there are no imperfections. The facial features are incredibly pure and most people look physically fit. The woman do not walk. Well, of course they do... but it almost looks like they cruise or float. They more or less hover above the ground and they all posses a very feminine gate. Looking down the street is like looking at a supermodel conference. 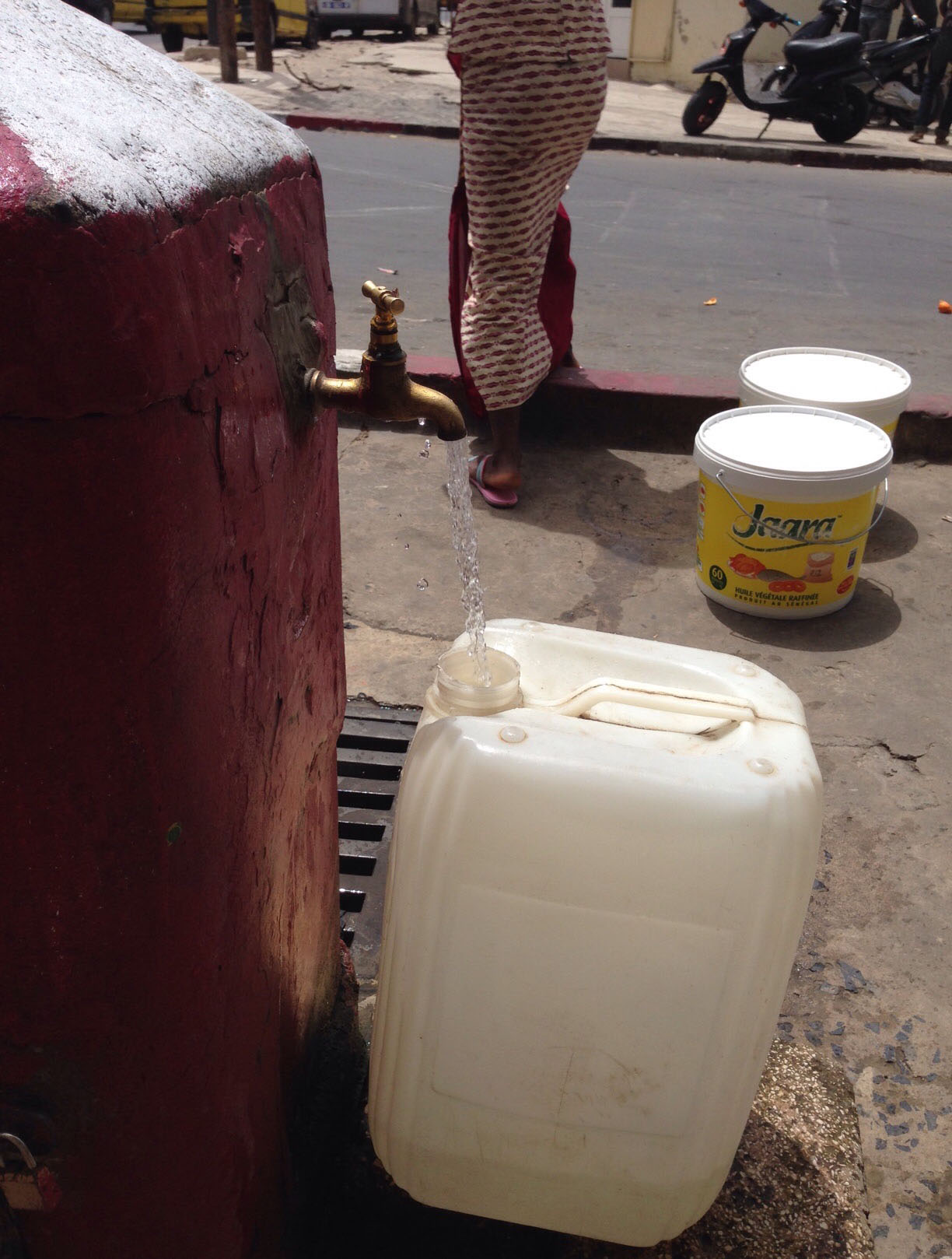 But being a woman here is not easy. Senegal is per definition a developing country. There are political plans to move forward and become an emerging country. But it takes work. Washing machines are an utopic dream for most. Washing clothes is done by hand and it is very time consuming. Far from everyone have access to proper toilet facilities and basic hygiene still has a long way to go. Nonetheless people smile, enjoy music and handle themselves with pride. I have seen slim well dressed women float down to the water tap which is available on most street corners. There they fill a large container of water and with some help lift it up onto their head. And then they femininely float away again... but with an incredibly heavy load upon their head. 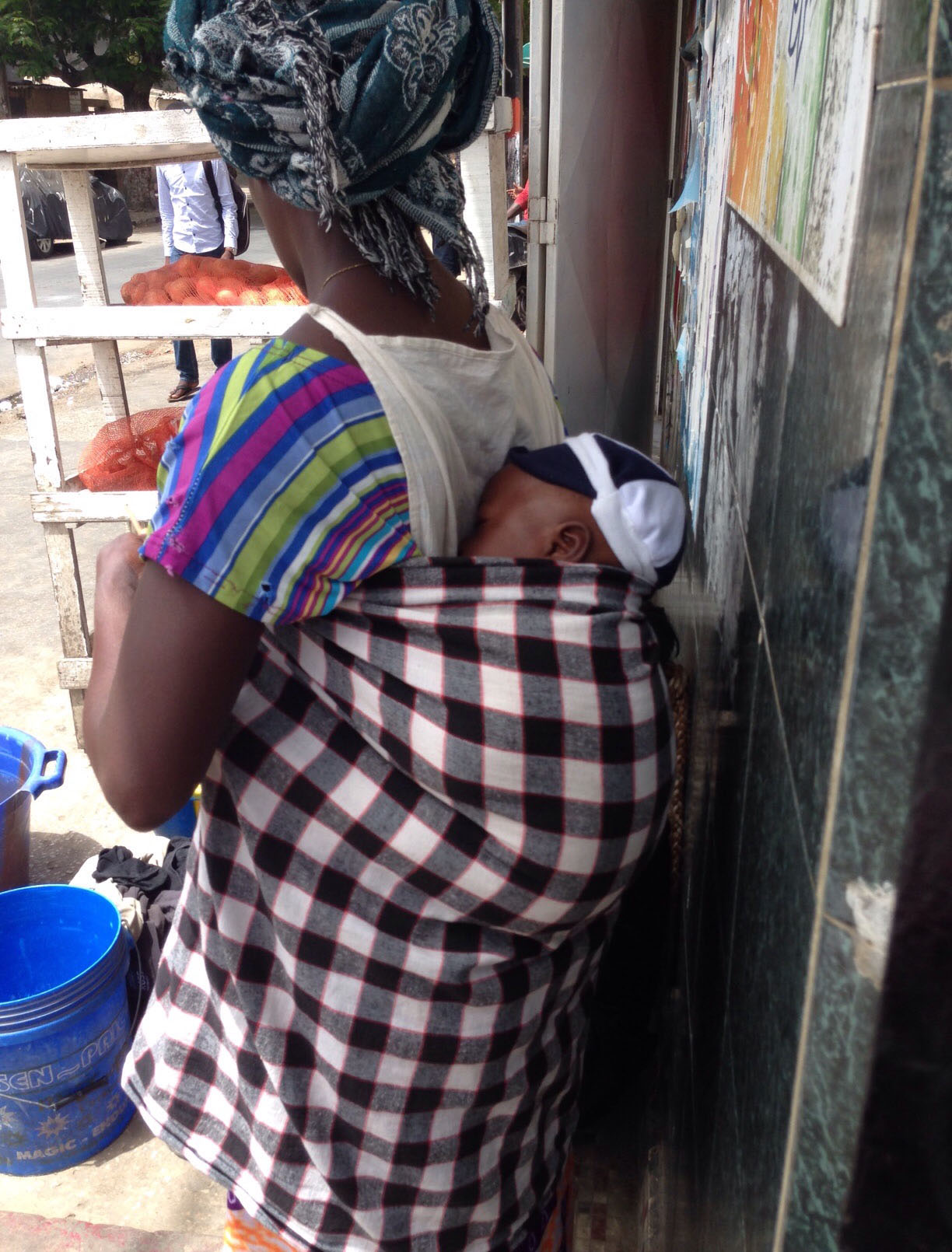 Hans Rosling, a Swedish professor, has been of great interest for me. He spent more than 20 years in African countries and is a master of statistics and the art of making it interesting. He as many is a key speaker towards how health and education can bring people out of poverty. But if we all had washing machines and cars then we would create more problems for all of us. So the development would need to occur in a energy conscience way. The "developed world" would need to move towards a green and energy efficient way and "developing countries" and "emerging countries" will need to adapt to that. Within the lifetime of many that live among us we have grown from a human population of 3 billion in the 50ties to 7 billion today. Will the rapid growth continue? Many believe that with health, education and family planing it won't. All of this is theory for some... but it is reality for the Senegalese. 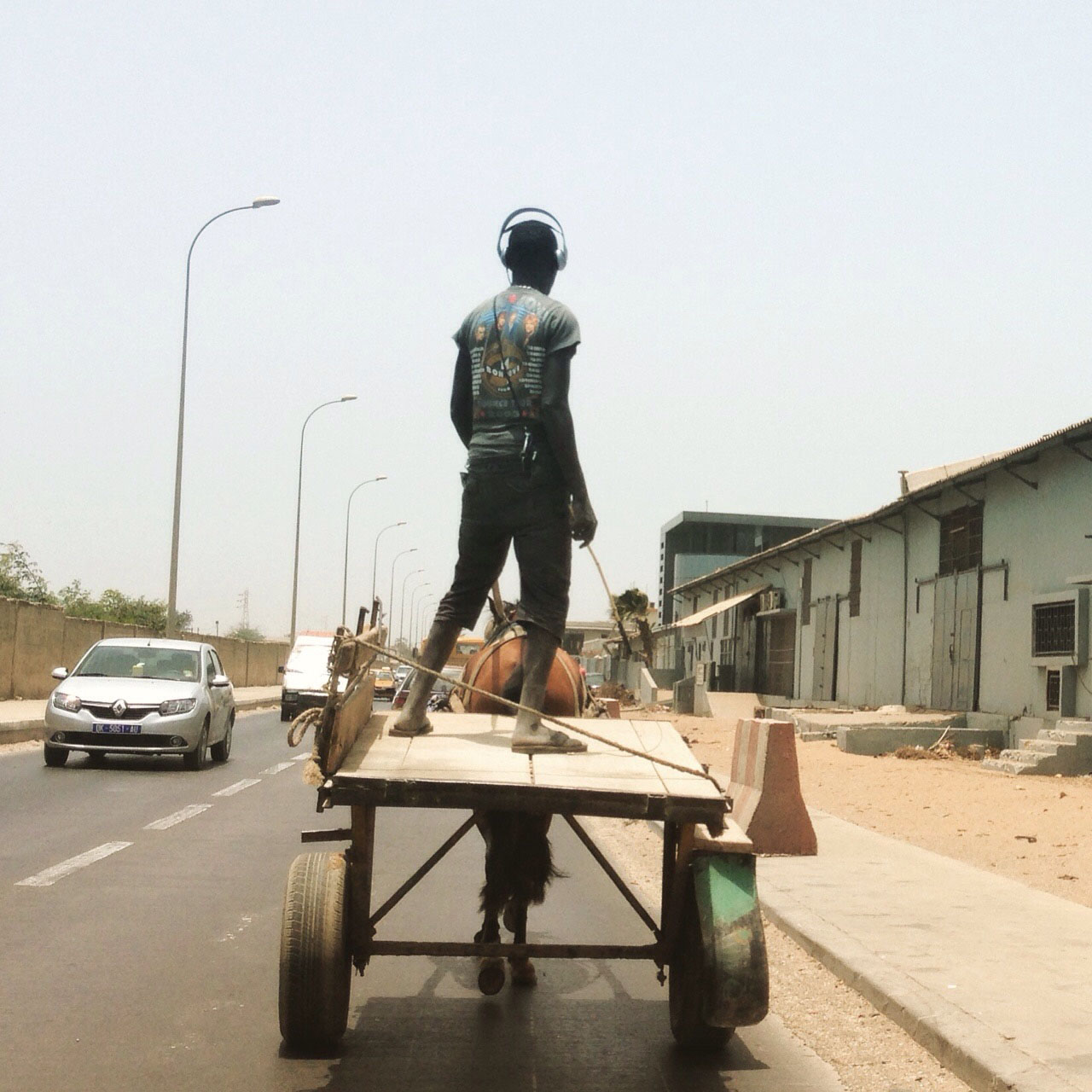 Senegal has every level of society. It ranges from the super rich to the super poor. And as any country it is comprised by the happy, the sad, the hopeful and the hopeless. You can buy a guitar or a tailor made suit for no more than $20.00. "Teranga" is absolutely worth mentioning when you speak of Senegal. It is a local word which simplified covers "great hospitality". And that is certainly something you will find in this country. I have found great hospitality in so many countries - but here they have a word for it! :) 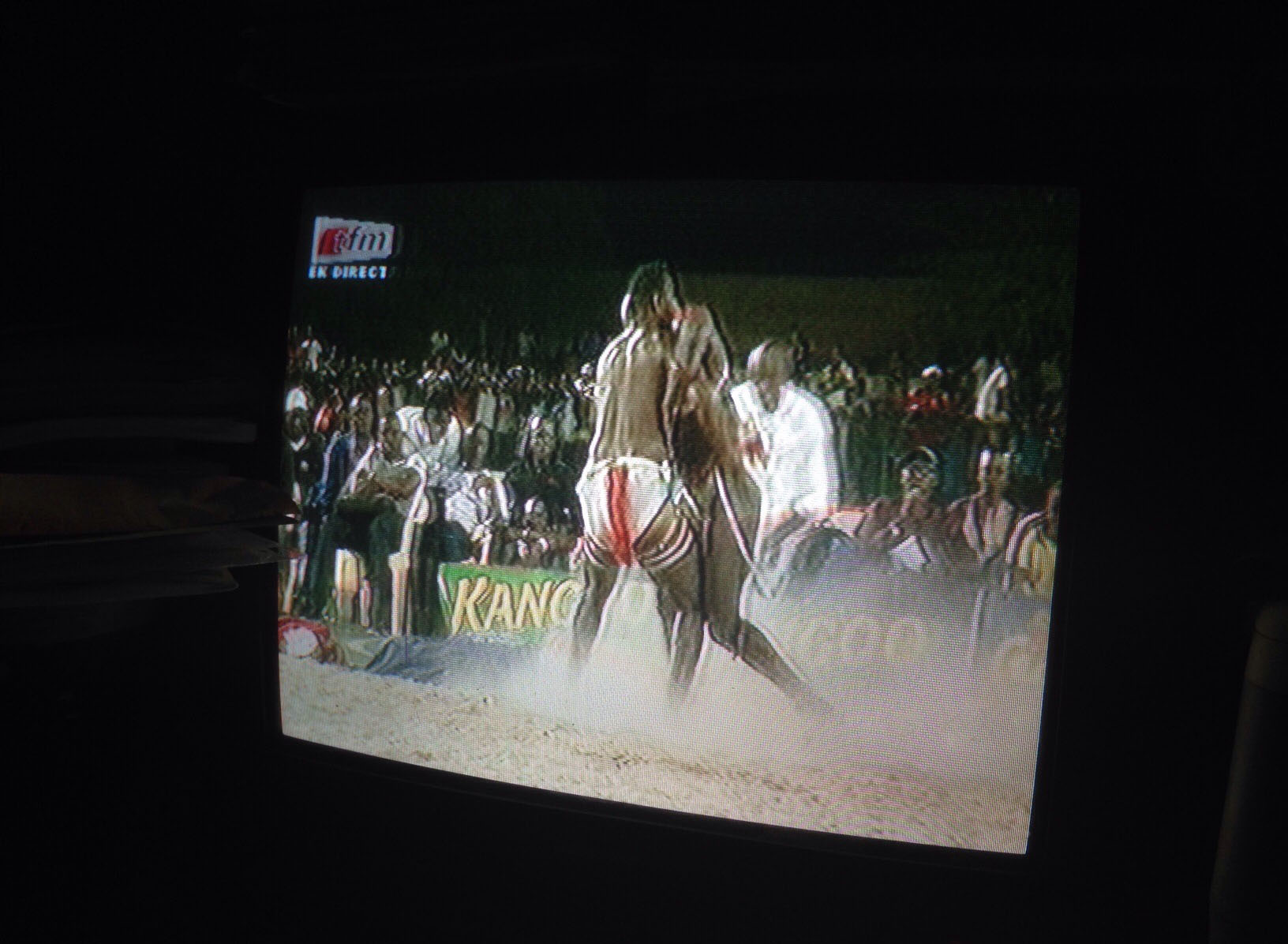 Freedom of speech is also found in Senegal which may surprise some people. Especially some of the neighboring countries will not fully understand how a popular comedian is able to entertain on television everyday by monkeying around and speaking his mind about the president! And not everyone is for this. But most Senegalese agree that this is a part of what it means to have freedom of speech. And freedom of speech is certainly a building block of the society which I was brought up in. Which makes it all the more precious to me.

Askey will invite just about anyone to come and stay on the roof. He is quite open like that. But he does it hoping that other people will open their doors to him someday. He hopes to travel and develop his music. In his roof I have met many new faces. Among them are Max and Amaury from France. They did nothing short of hitchhiking from Paris to Dakar! Just a little personal mission for the two 26 year old adventurers. They are both from Normandy so there might just be a little viking in them :) It only took them 1 month to reach Dakar which included about 2 weeks sightseeing in Morocco. That is something to think about. Anyway, once they reached Dakar they decided to continue further south into Africa and recently returned to Askey's roof. Now they have paid Grimaldi lines (containership) to travel across the Atlantic from Senegal to Brasil. Bon voyage mes amis. 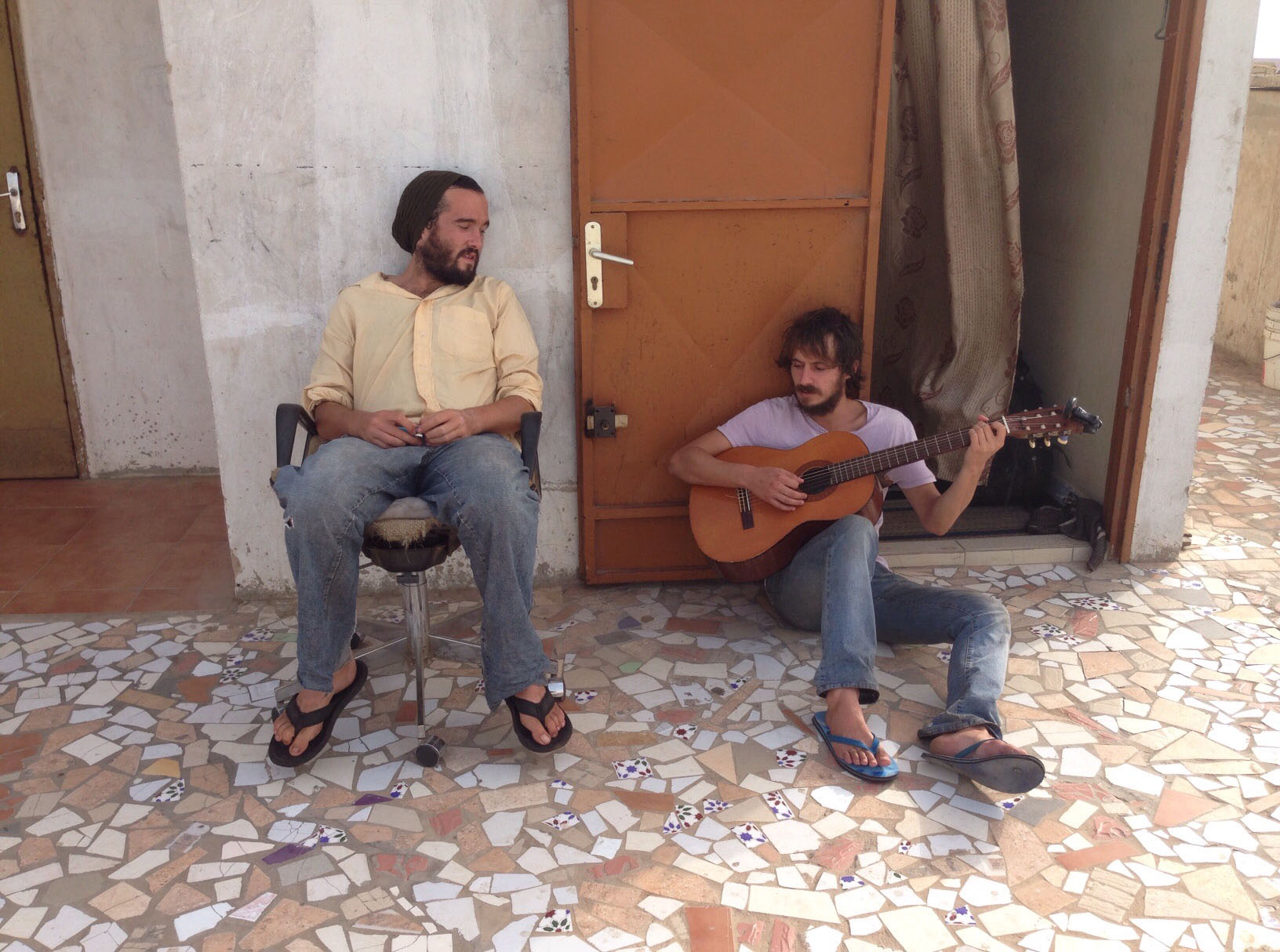 For now I am looking for that boat which will carry me out to Cape Verde. A good boat can do it in 2 days. But there isn't a lot of traffic. A sailboat left the other day. The captain is French and he goes regularly. But he had no room for me although I believe he would have helped if he could. Let's see what the wind will bring :) 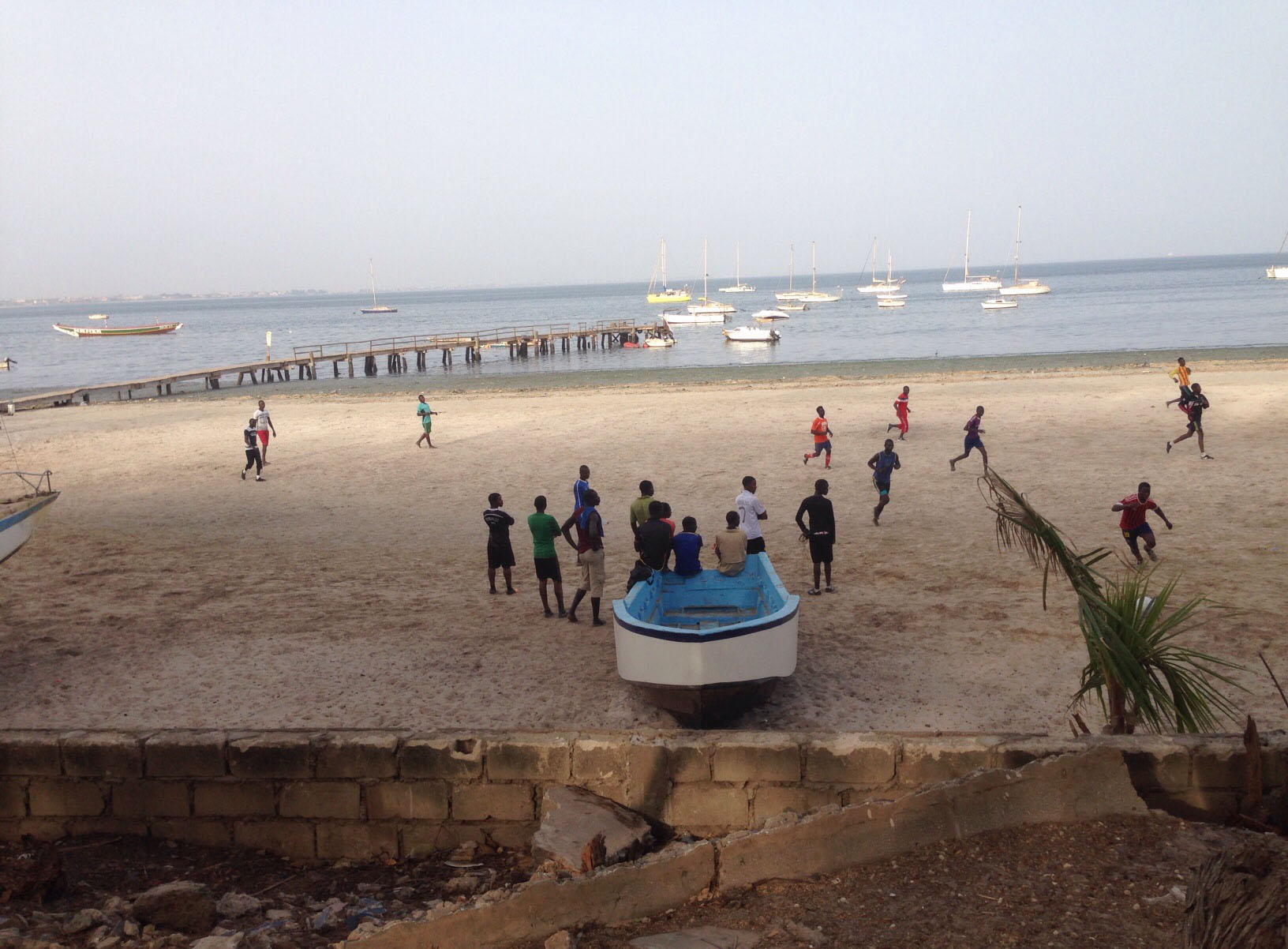 Some say that the name Senegal comes from the native language Wolof and is derived from "sun gal" meaning "our boat". How fitting.

RT @SalomonSports: This weekend @onceuponasaga won the biggest traveller award! We are glad to be part of his journey exploring every count…