The "escape" from Cape Verde

View Comments
Promoting travel, smiles and the goodness of mankind

Just as I was about to sit down and write this...it came to me...that perhaps I enjoy the challenge more than the actual travel. Yes, I think that is the case. I absolutely love to travel. I enjoy diving into all these cultures and discovering first hand why we care about people far away from us. Why we send money, support, people, medicine and know-how to people we have never met - but who have suffered greatly for various reasons. It's worth thinking about. 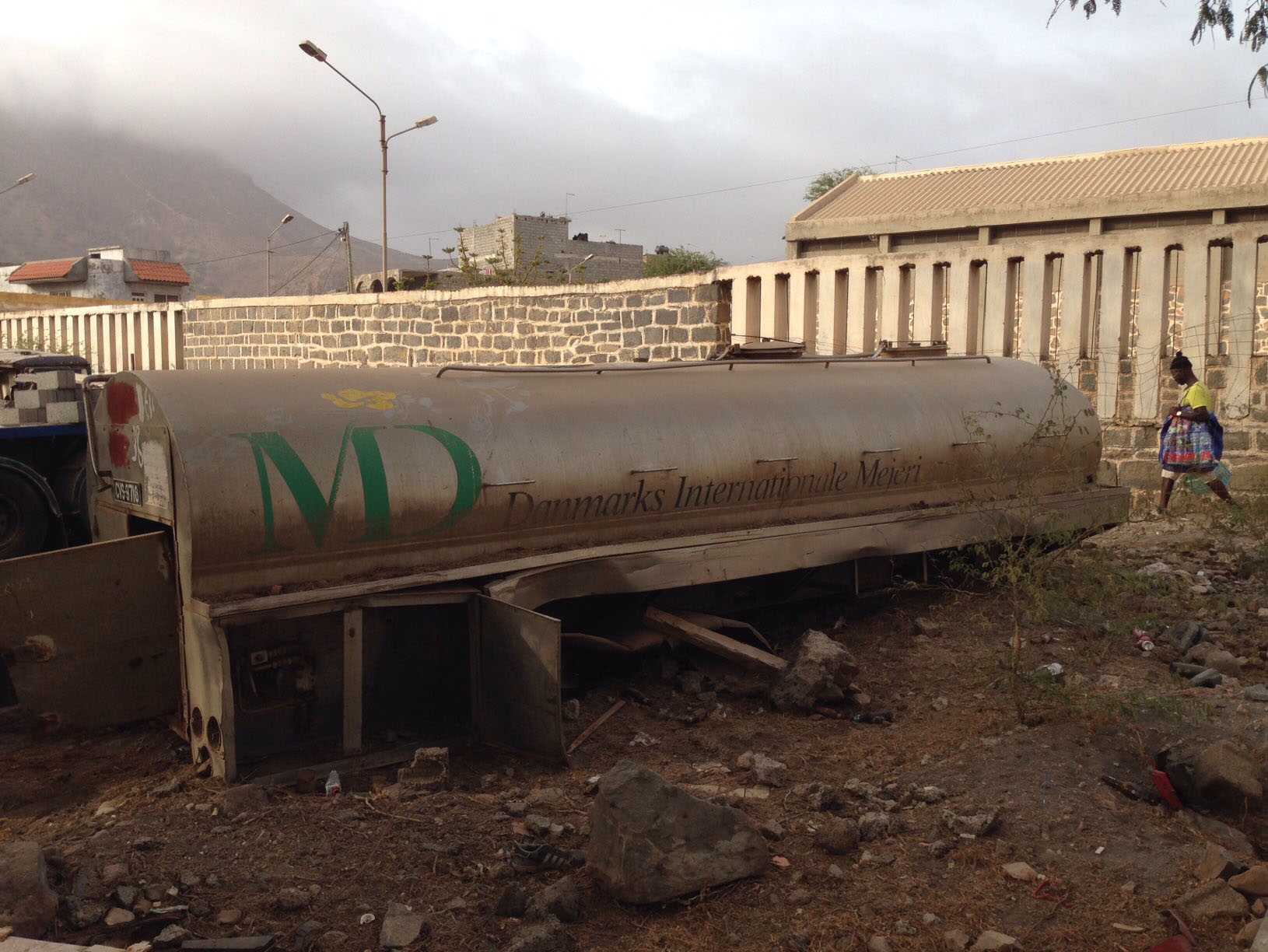 I spotted this old Danish milk tank from MD Foods. Memories from my childhood.

But in reality while I do enjoy meeting new people, new cultures and different environments...I do also see the worlds countries as an abstract obstacle course for me to complete. Country number 100 will be Congo unless something changes. And 100 countries is kind of a psychological halfway marker. I did all of this to myself. I decided that I would travel to every country in the world without flying. And I created the rules of which this project must be subject to:

I think that many can do what I have done so far. But I also think that many would fail. And even more people will never try. And that makes this a good challenge. Perhaps it is the exact reason why I feel down when I am "stuck". The lack of progress gets beneath my skin and effects my mood. I was hoping to "escape" Cape Verde a lot faster. But it proved a lot more difficult than anticipated. 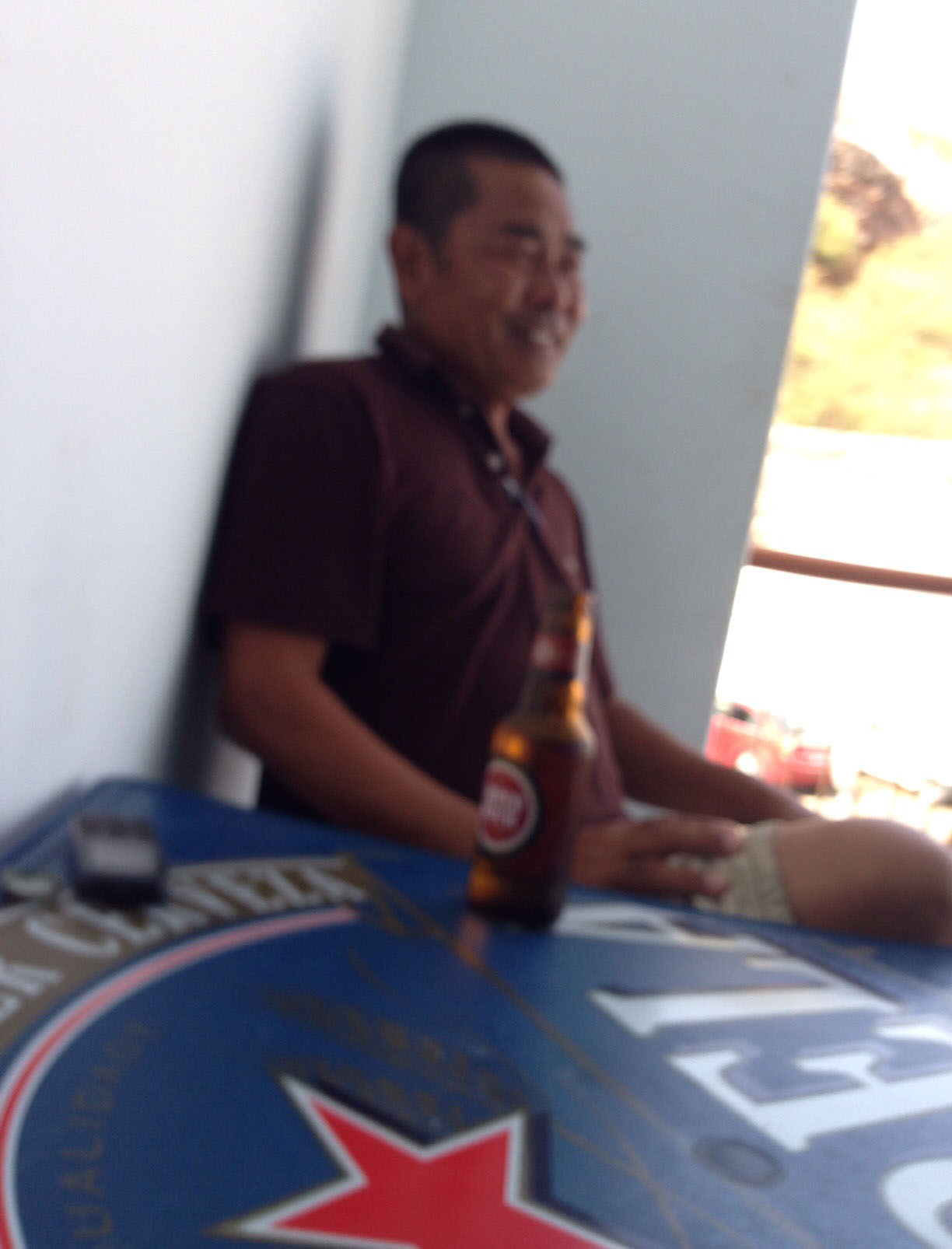 Captain Kazunori is well known at the marina in Praia. His Japanese fishing boat has been in Cape Verde for 7 years. And so has he. Misfortune and bad decisions placed him in Cape Verde. He only managed to fly home for 2 weeks within the past 7 years. He has a wife and children in Japan. He is the owner of a fishing boat with no fuel. And Kazu has no money. Some of his equipment has been stolen off the boat and his partner in Cape Verde is somewhat in control of the boat. The partner tells Kazu what to do. So now he isn't fishing. He sometimes gets a transportation job handed to him from the partner and then the partner pays for the fuel. Selling the boat is also a lose/lose situation due to bureaucrats and laughable offers. It's a sad story. 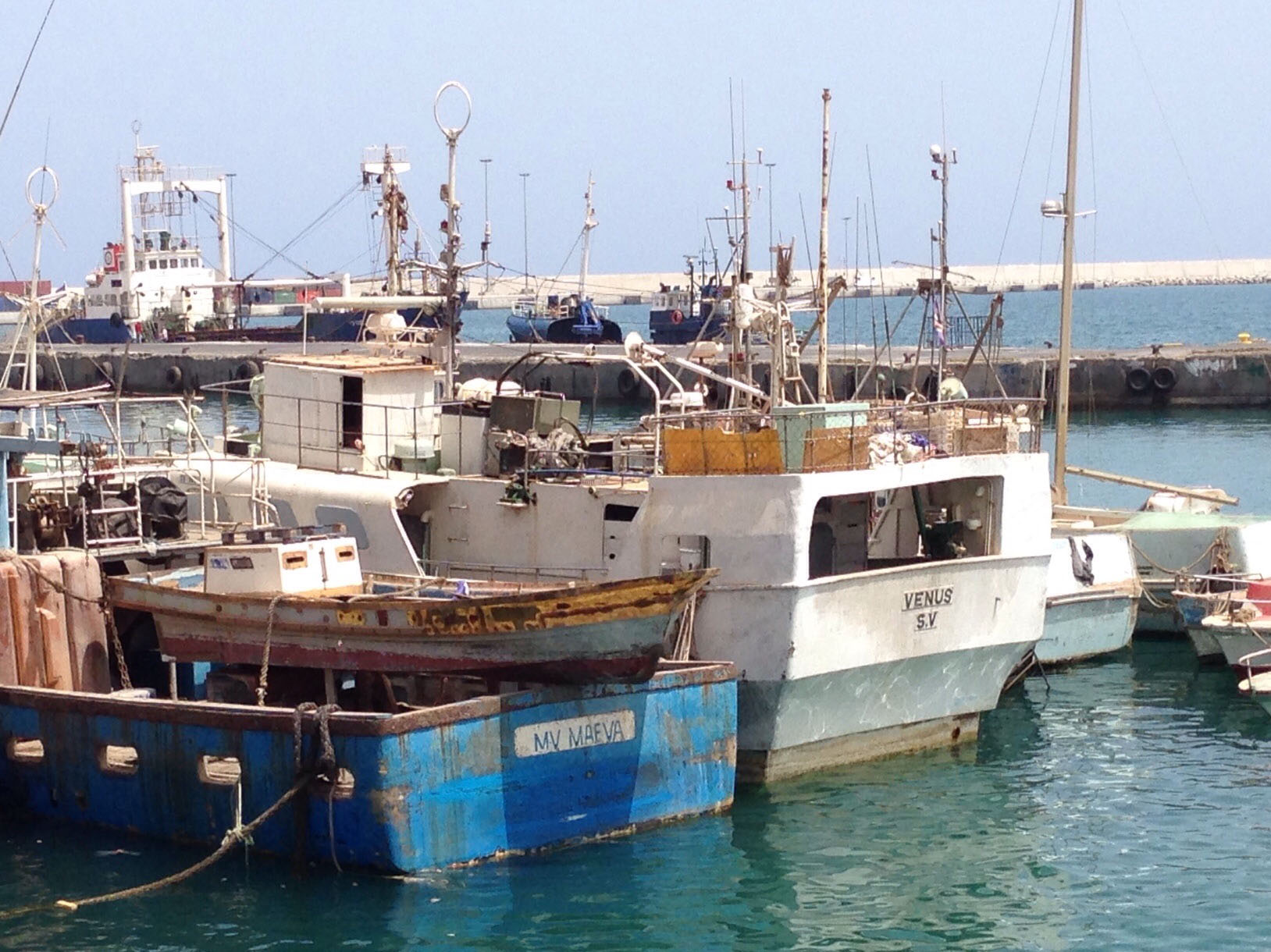 He is a nice guy. And he almost left to go to Senegal last week. But he didn't. And I think that he would have brought me along. Actually, the partner might be sending him to Senegal today?! But who knows? I have been onboard his boat, the "Venus", a few times and I have bought him a few beers. And I could put all my energy into trying to help him, create awareness and perhaps raise money...but I tell myself: "One project at a time". I try really hard to promote the countries that I visit in the best way possible. I try to promote and increase awareness about the Red Cross Red Crescent movement. And I am trying really hard to reach every one of this planets countries without stepping into an airplane. In all honesty I think this would have been a lot more fun if I didn't deal with all social media, with all the Red Cross interviews, stories, pictures, descriptions and this blog (which on average takes 5 hours to create). If I simply traveled for travels sake and spent as much time in any one country as I pleased. But then this wouldn't be "Once Upon A Saga". Traveling like this is very much like having 203 cakes in front of you and sticking your finger into the frosting - but never getting to eat the cake. Not quite true though...I tell myself that I will have some idea about which countries I want to revisit during the rest of my travel life. I should be back home before I turn 40 and that leaves me with another 40 years of traveling...at least. 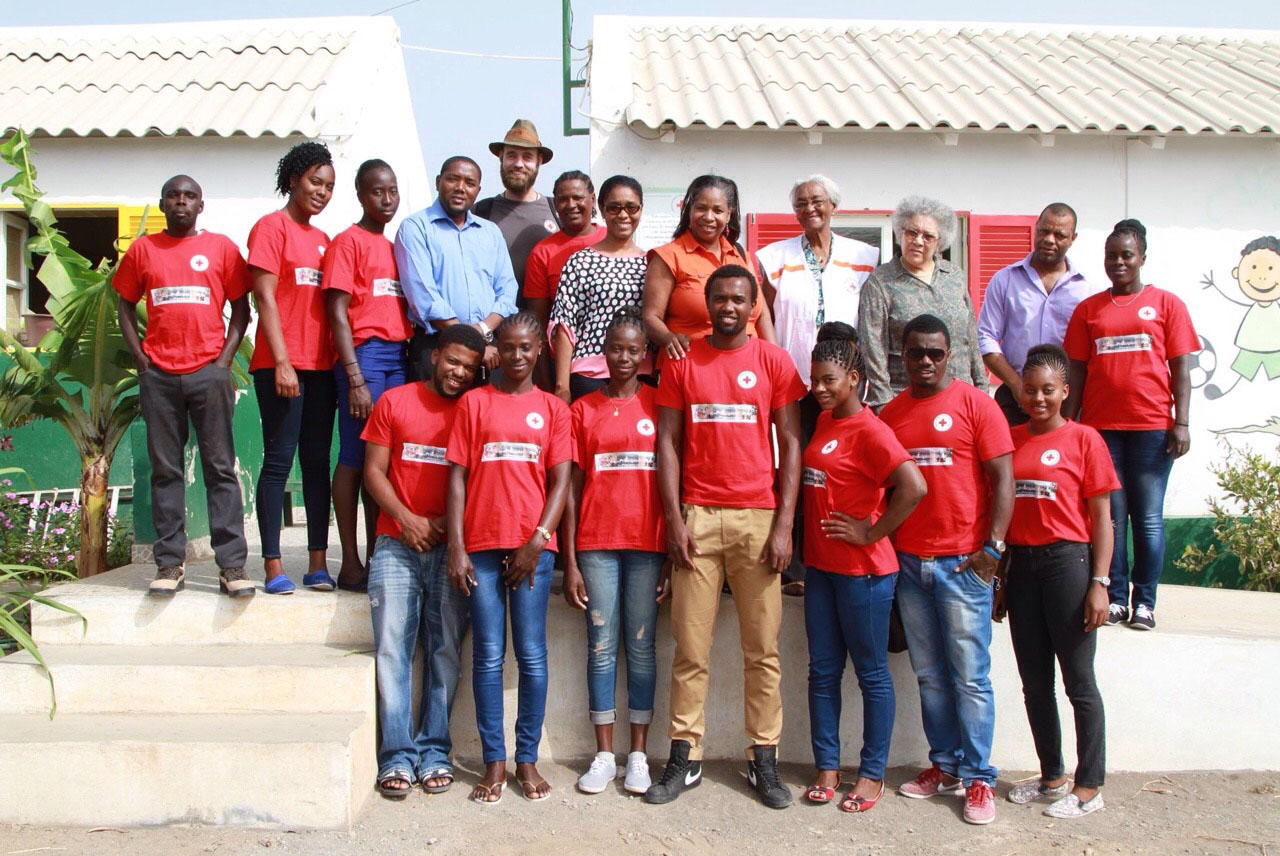 I had the pleasure of celebrating the international Red Cross Red Crescent day together with Cape Verde Red Cross. We did so in Tarrafal which is a village on the north side of the island Santiago. This year also marks 40 years of independence for Cape Verde and furthermore 40 years of Red Cross presence. And as it happens to be, the Danish Red Cross sponsored the very first project in Cape Verde 40 years ago: A kindergarten in Tarrafal. 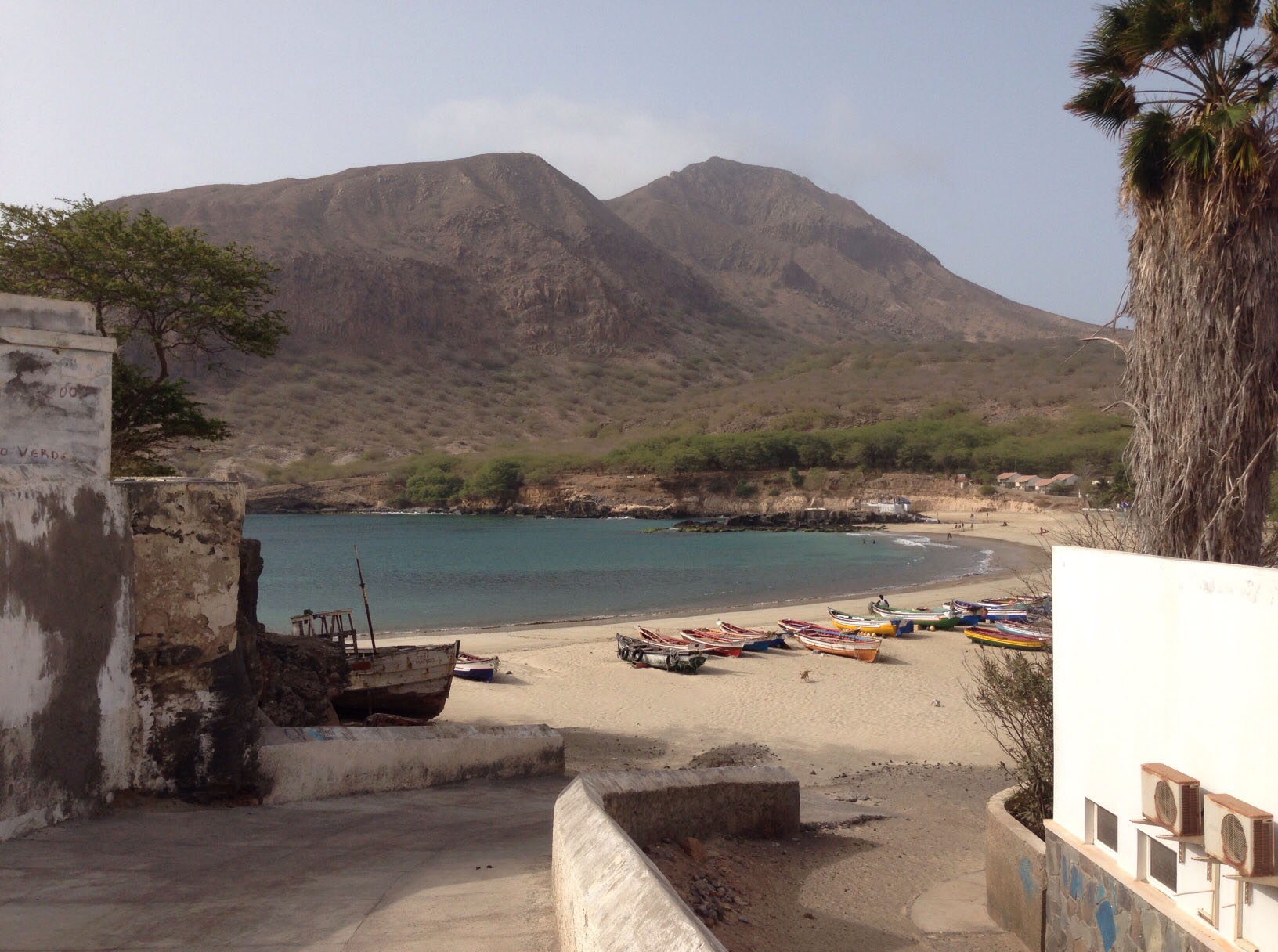 Tarrafal is a lovely, quiet little fishermans village. It has a decent beach and plenty of youth. It also has a great deal of good food and friendly faces. I like that about Cape Verde. There is time for personal contact, handshakes, kisses on the cheeks, sitting down for coffee, playing chess, listening to music, fishing, eating cachupa, drinking grogue... 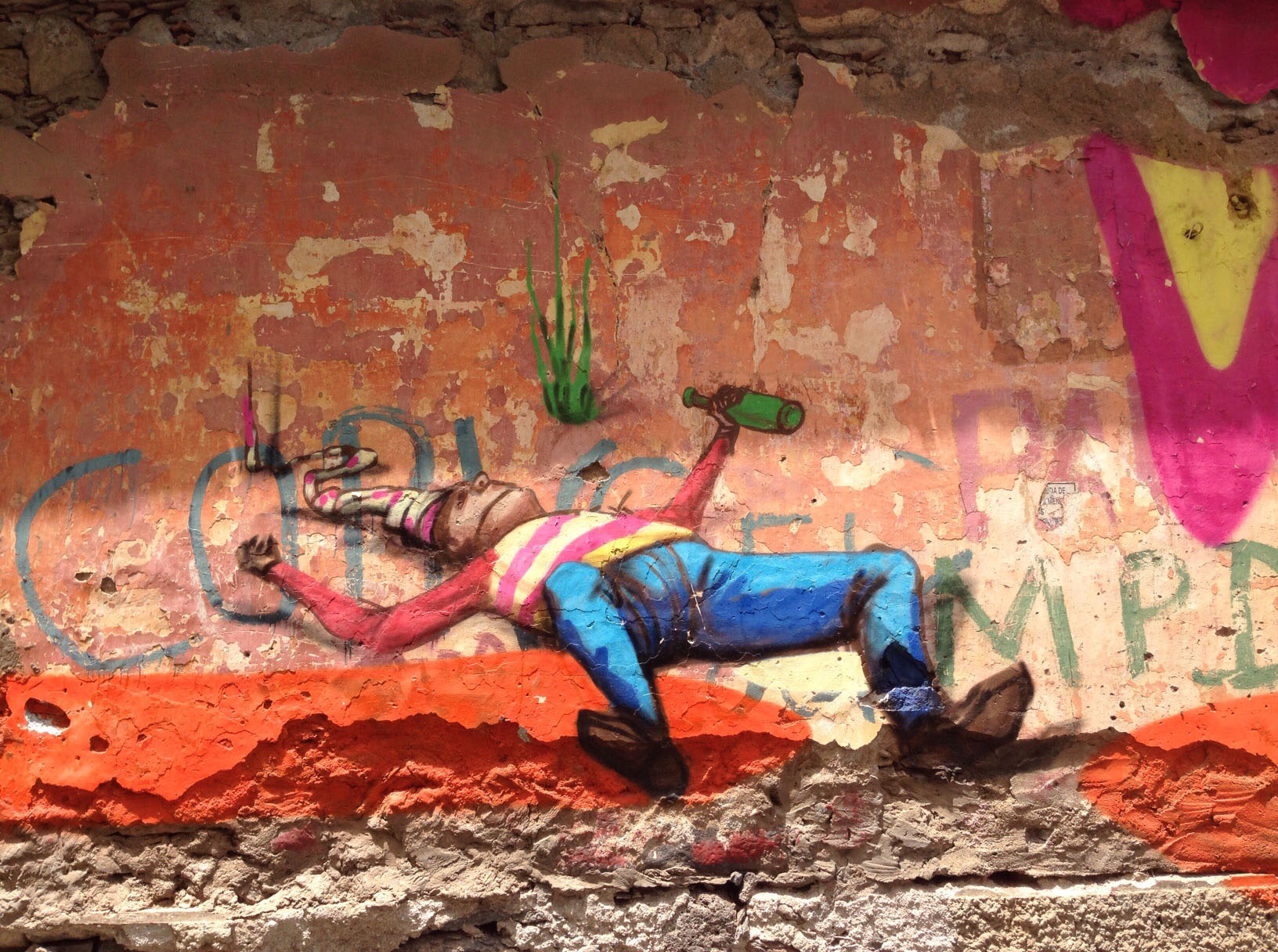 Grogue, also known as grogu or grogo (derived from English grog), is a Cape Verdean alcoholic beverage, made from sugarcane. Its production is fundamentally artisanal, and nearly all the sugarcane in Cape Verde is used in the production of grogue. It has a high alcohol content (up to 65 % by volume). Quite a kick if you are not expecting it!! The first time I tried it, it was served in something that looked like a beer bottle so I thought it was beer. I washed down a big mouthful and was quickly surprised. It burned!! :) 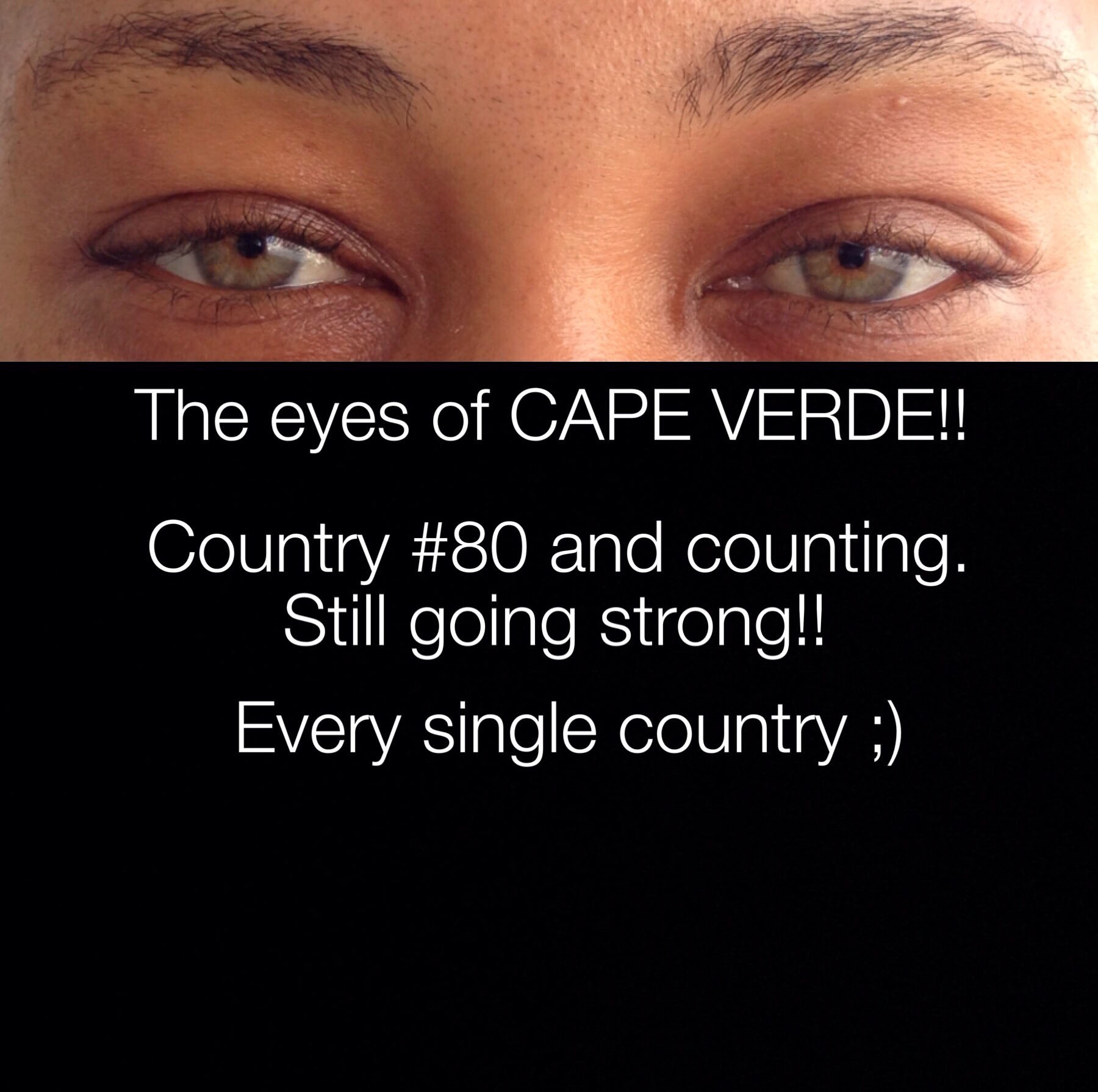 I'm still taking a picture of someone's eyes in every country and often it is coincidental who's eyes I get. But sometimes I see a pair of eyes and it just "has to be those eyes". It happened in Barbados and it happened again in Cape Verde. I can't believe I still get shy when I ask people...I mean seriously!? After so many countries?? :)

Has the world gotten more dangerous over the past decades? I came across an interesting article where 5 authors (scientists and scholars) were asked about this. It caught my attention because I'm often asked about security while the media keeps screaming things like: EBOLA, BOKO HARRAM, TERROR, ISLAMIC STATE, POVERTY, CLIMATE CHANGE, DEATH!!! But confirming what I heard several years ago, we are actually doing quite well. I'm not saying that there are no people who are suffering. Because there are. And I continue to say that desperate people will do desperate things. But all in all we are developing in a much healthier direction. 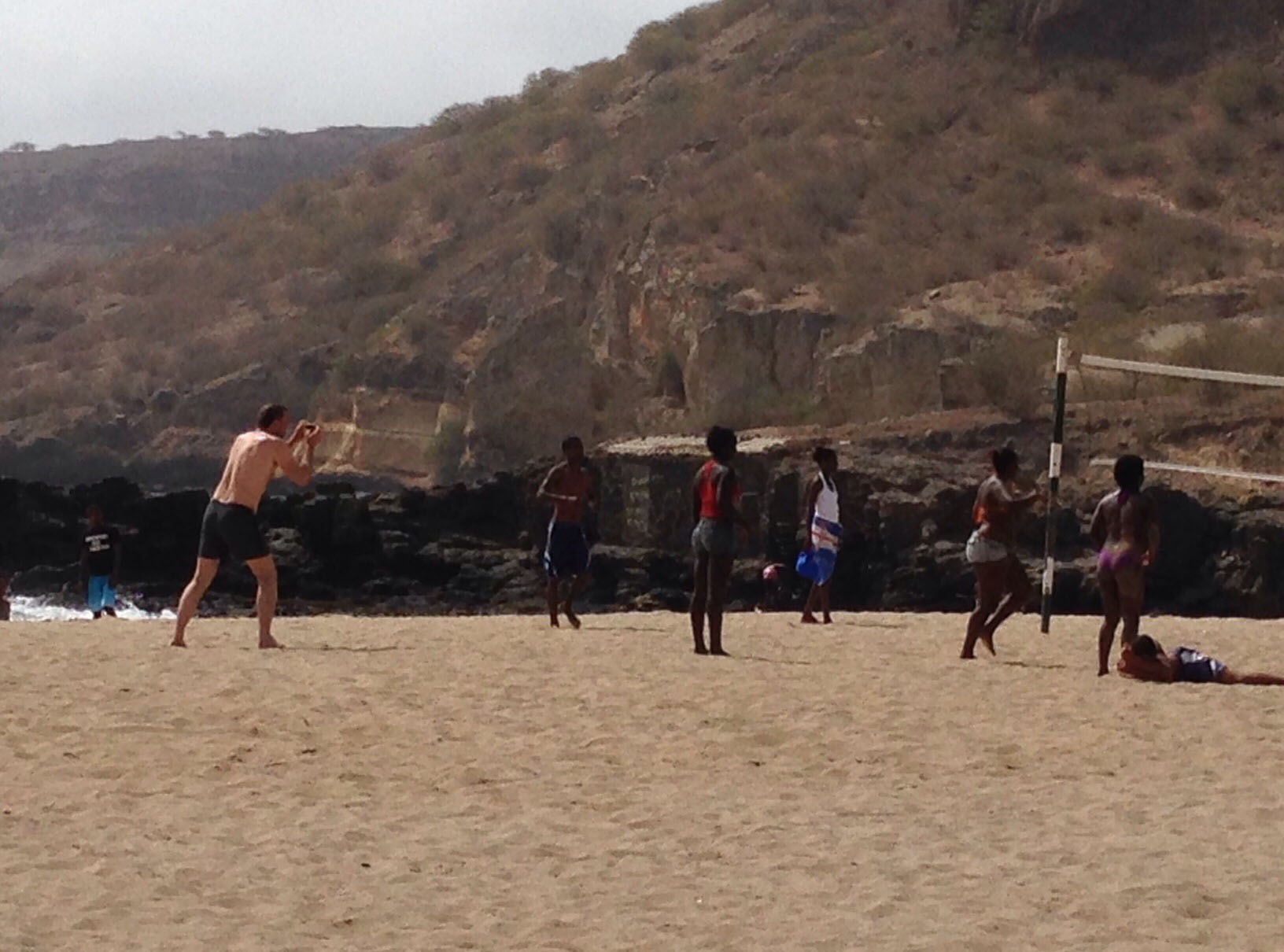 Catching a picture of a man taking pictures of young women. Priceless!!
Each author was asked about the world today, and whether it is in better shape than in 1990, when communism was on its deathbed and the Internet was in its cradle. They noted the world has seen extraordinary declines in poverty and child mortality, epic rises in global trade and investment, and the spread of democracy and human rights. The threats of loose nuclear weapons from collapsing nations, debt crises in Latin America, Southeast Asia or Russia, a war between India and Pakistan, the collapse of Africa and a litany of global pandemics have all been avoided. So there you have it! And they are all smarter than me :) 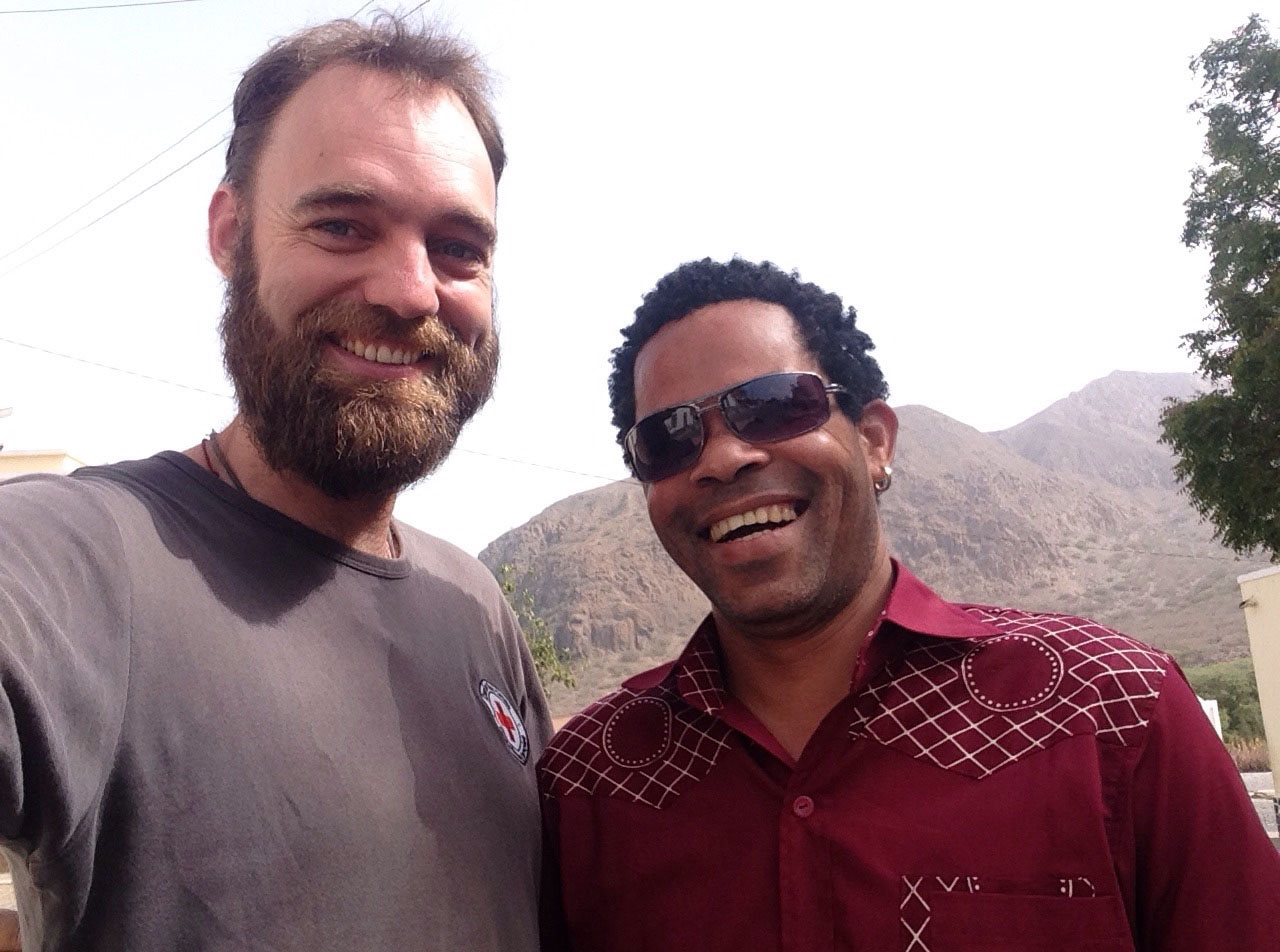 I didn't meet Lenny Kravitz, but I probably came as close as I ever will on this journey when I met Paulo Cabral. He is a photo journalist, among other things, and he had no idea about who Lenny Kravitz was. So I showed him a picture and he completely disagrees :) One afternoon when I met him and he mentioned that the local cinema was showing a Danish movie. It was as a part of the "Festival de Cinema Europeu em Cabo Verde" (the European cinema festival in Cape Verde). He went to see the movie at 7pm but invited me to join him at 9pm when it was showing again. The movie is about a historical important transition within human rights. And on top of that it has a lot of intrigue and also a forbidden love affair. It's all true! (sort of). The English name of the movie is "a royal affair" and it has been filmed in Denmark, it stars Danish actors, it explains Danish history and it did so in Danish with Portuguese subtitles. It was a very nice but also very surreal experience to sit so far from home, in a Cape Verdean cinema and see a Danish movie. There is a scene where the Danish king, who happens to be insane, is given a young African boy as a "pet" (the movie is set around 1770). Knowing that Cape Verde was born out of the Portuguese control of the African slave trade, it felt especially awkward to watch that scene. But watching it in Cape Verde was definitely a great overall experience and a story to remember. It was good to see a slice of my country, as I am so far away from it. 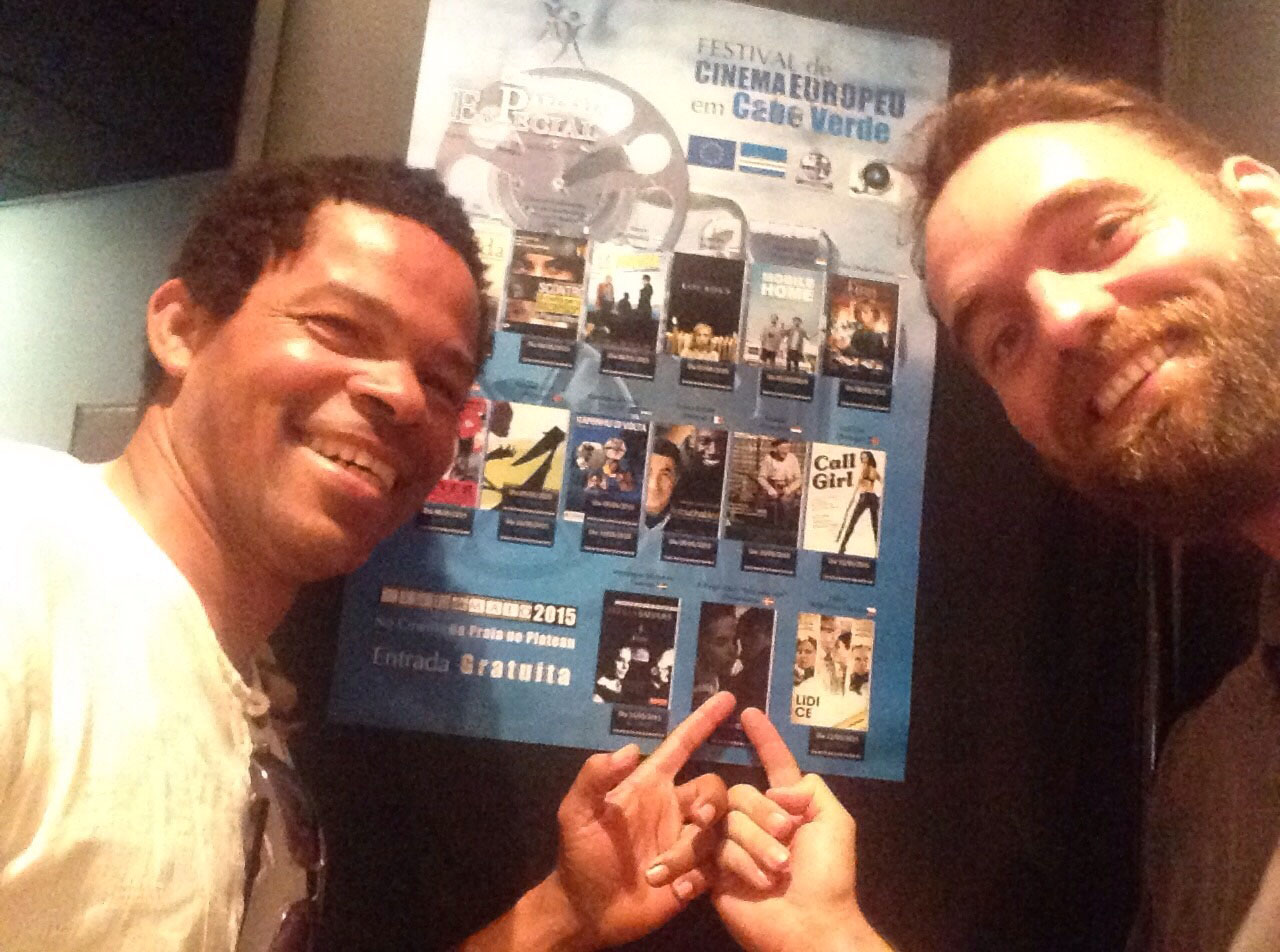 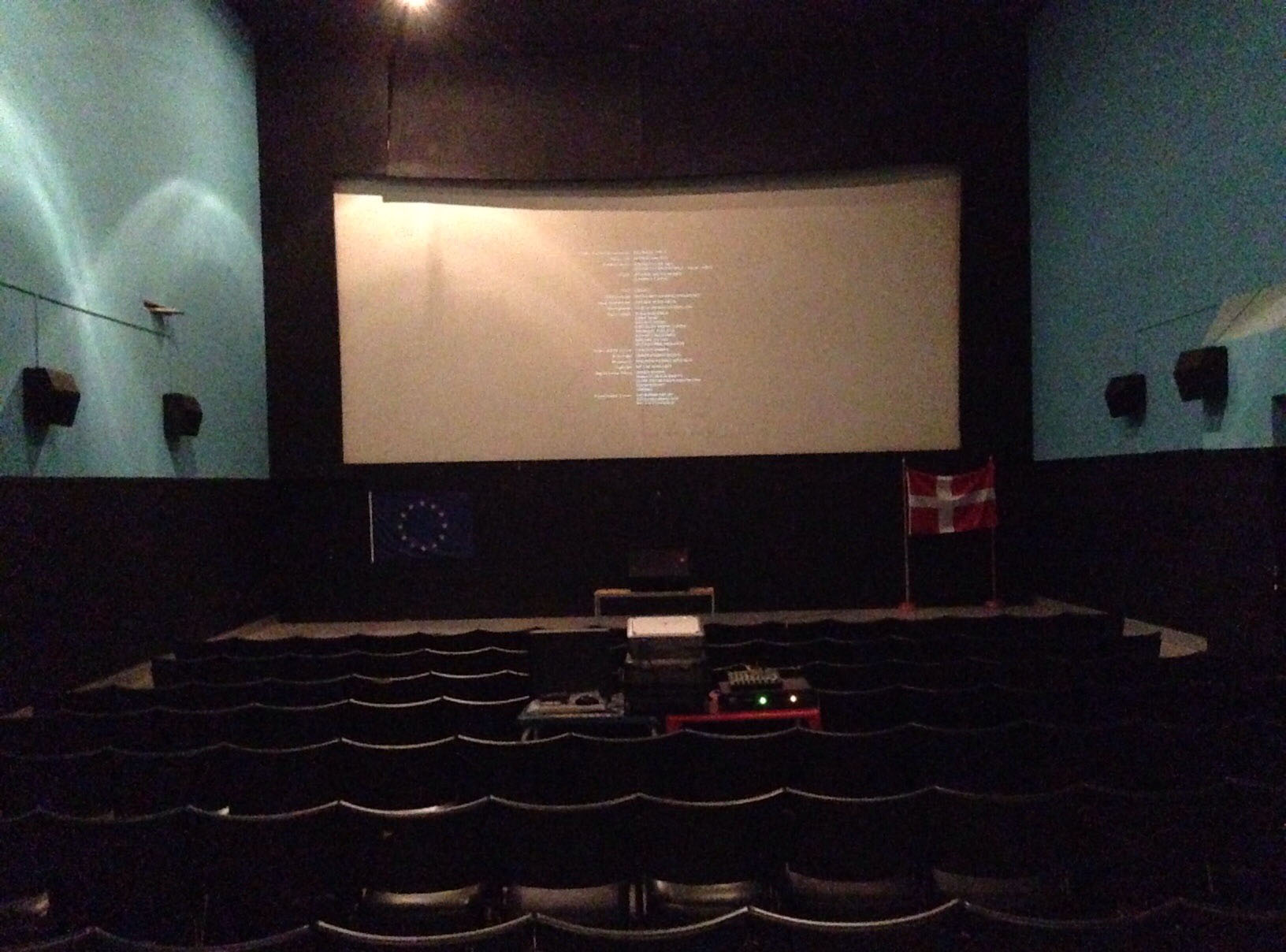 Paulo Cabral and I at the Cape Verdian premiere :)
Finally, the interview with Magarida Fontes on national television went really well. I still haven't seen it as I haven't had a strong Internet connection so far. But it has been seen by many people and I have been recognized by hundreds of people on the street which must be a new record! :) I do not envy the big stars of our world as they must live through it every day and every where. It's fun to begin with...but the fun quickly wears off... 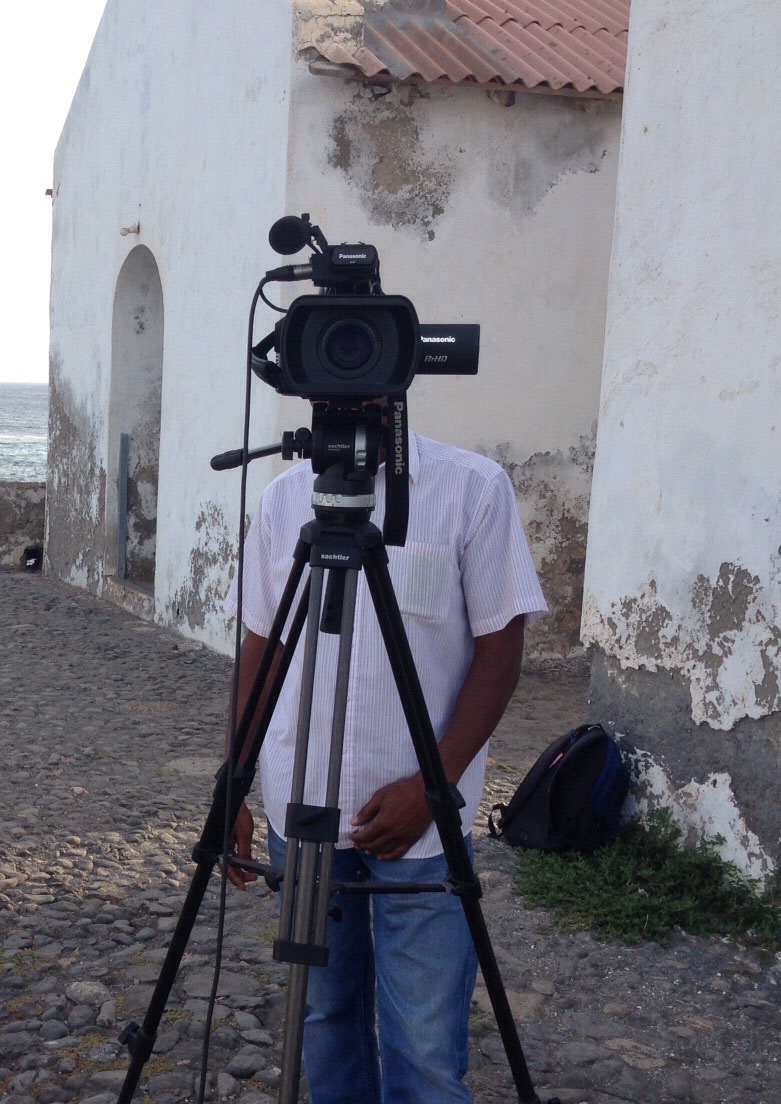 Click here for the interview
Which is not why it is good news that I have left; but leaving is still very good news! :) Also not because I couldn't spend more time in Cape Verde. Because I surely could! Just not within this project. MAERSK TO THE RESCUE! :) The good captain of the "Clara Maersk" has welcomed me onboard. It was coordinated through Maersk's head office in Denmark like it also was the last time. This ship is registered with a Danish flag...so all in all the last week of my Cape Verde visit has been quite Danish (MD Foods, Cinema, ship). We are heading to Guinea Bissau via Sierra Leone's capital Freeport, so it will be a few days (but surely more comfortable than getting here) ;) 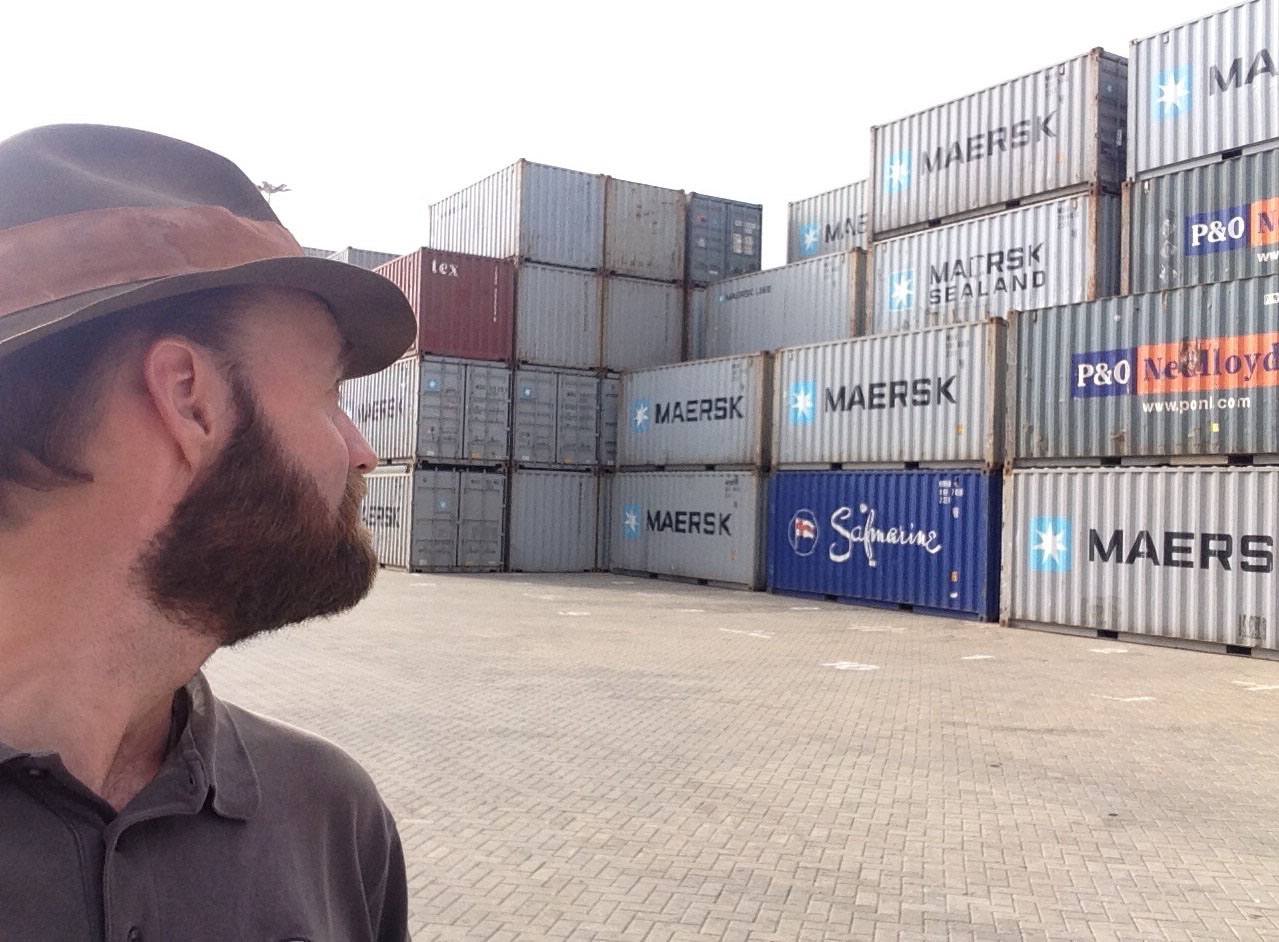 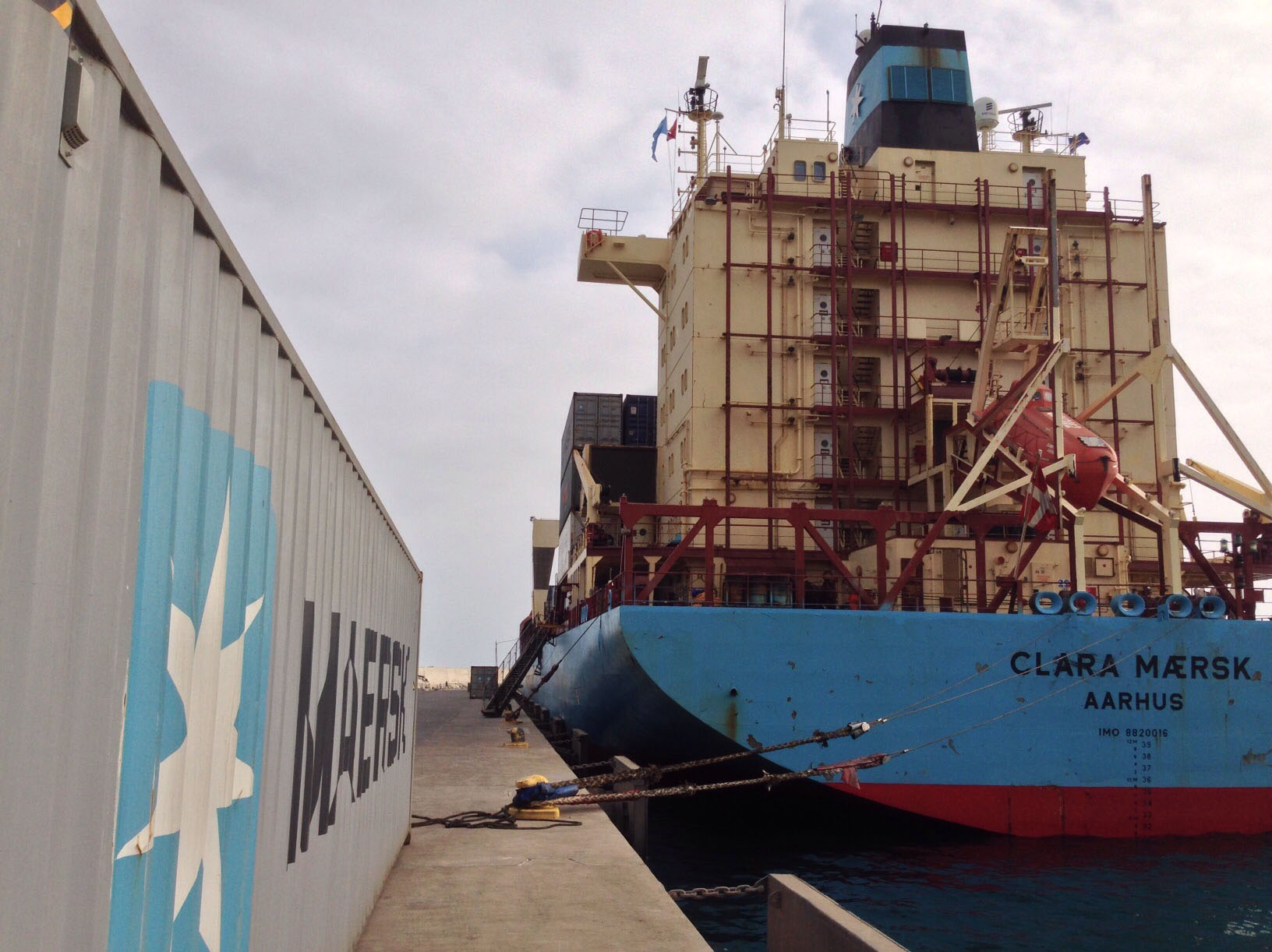 Once Upon A Saga - every country in the world without flying.
back to top