Comoros - you've heard of it, right?

Okay, granted: You have no chance of being the first person to reach Comoros. People have been living here for at least 1,400 years and the first European explorers found Comoros 500 years ago. But something you should know about Eastern Africa is that the European explorers were not the first outsiders to arrive! Nope, because Eastern Africa is close to the Middle East and Arabic seafarers got here first. So you are way to late as an explorer...although: Who do you know who has been here? Oh, you don't know where it is? Well it's a tiny archipelago formed by 3 volcanic island and they are jammed in between Madagascar and the mainland of East Africa. That puts them in the Indian Ocean. 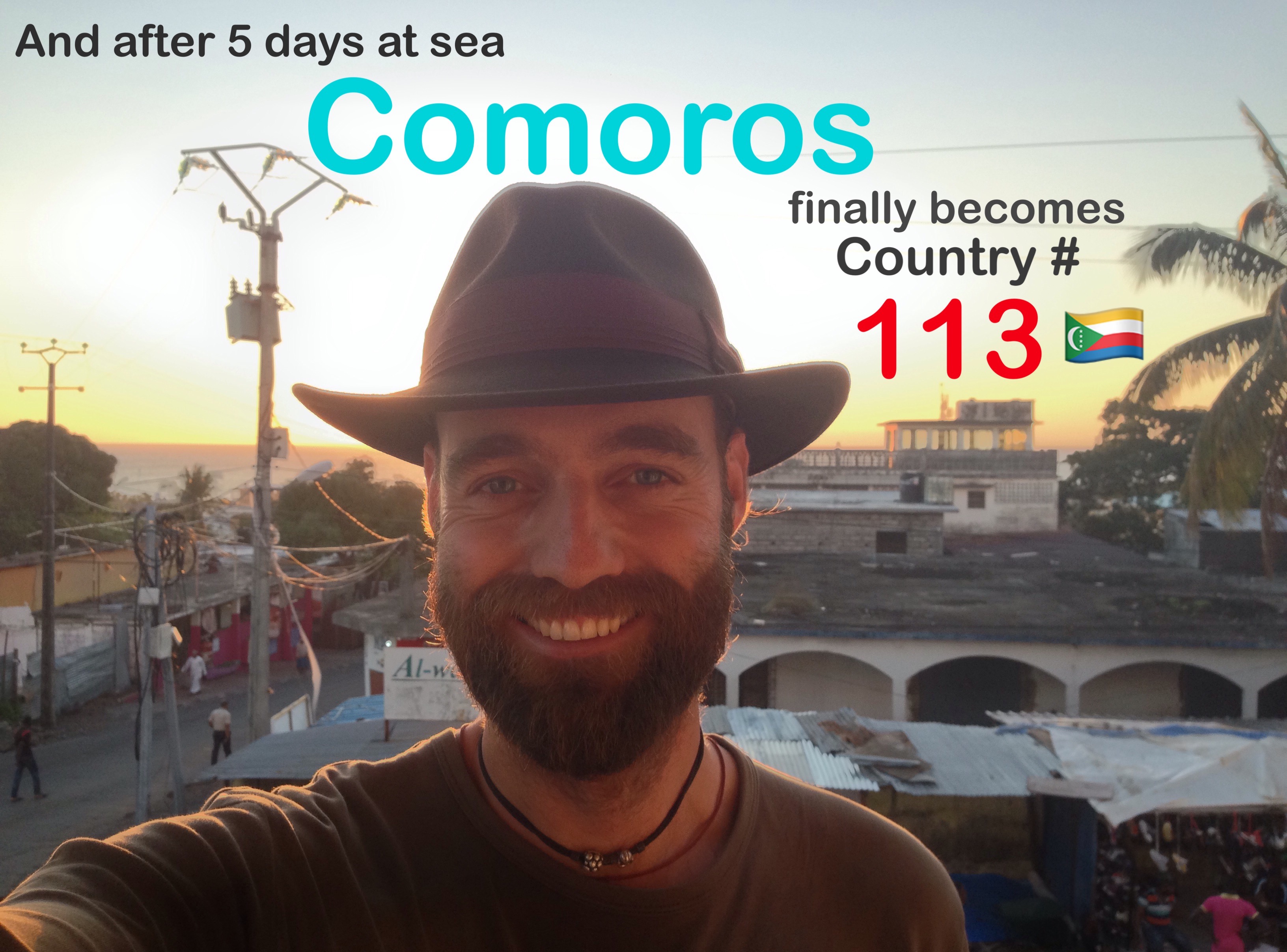 The population is kind and peaceful. The country has seen its share of violence, but that's over a decade ago and revolved around who gets to be the biggest fish in a very small pond. About 20 coups/coup attempts have swept across the Comoros island. 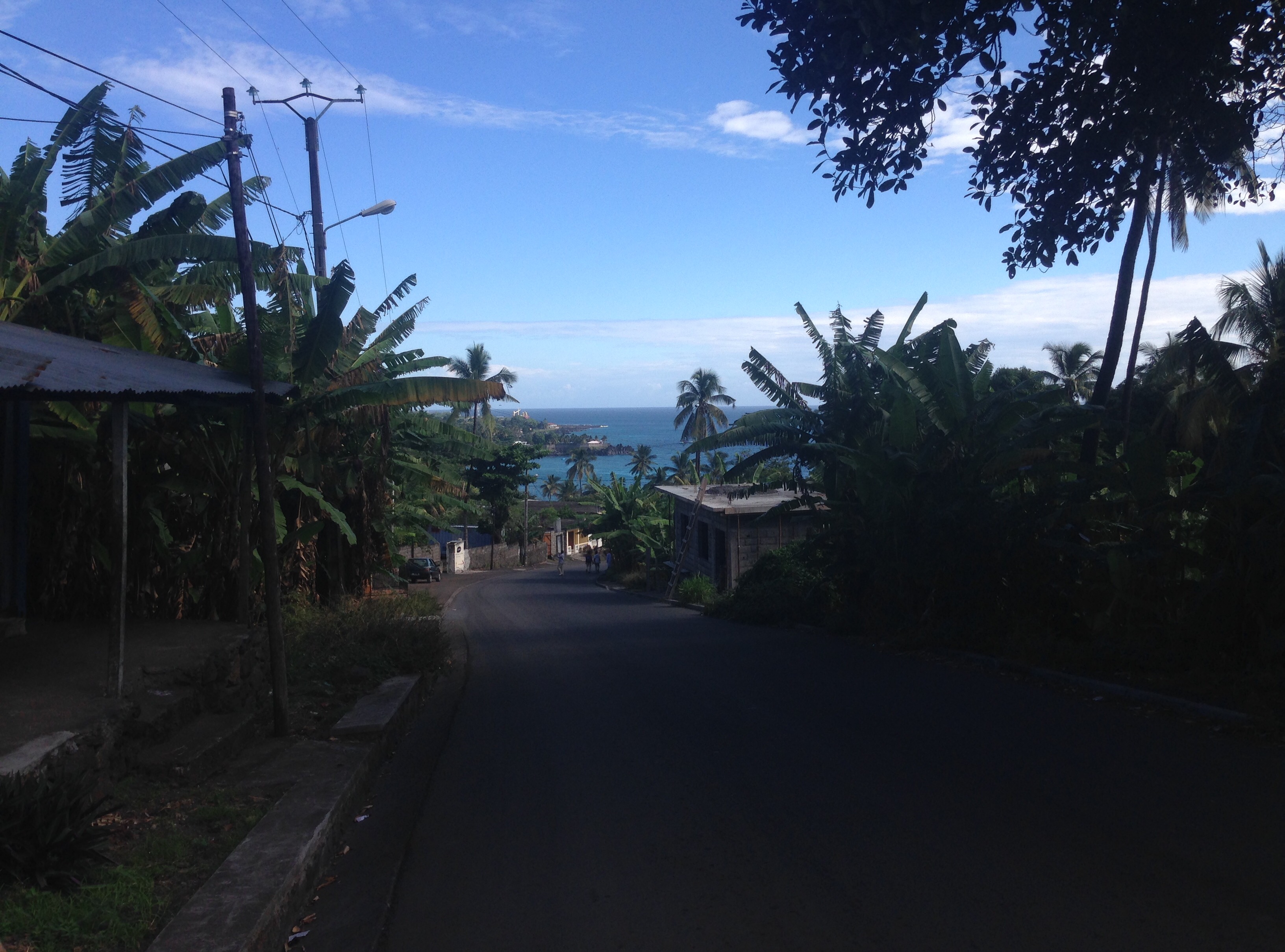 It's one of Africa's 54 countries and a member of the African Union. However it's also a member of the Arab League. Actually the most southernmost country of them all. French is commonly spoken by most Comorians, however amongst them selves they commonly speak Comorian or Arabic. So I got to brush up on all the French which Western and Central African countries had beaten into me (the beating most took place in Central African countries). 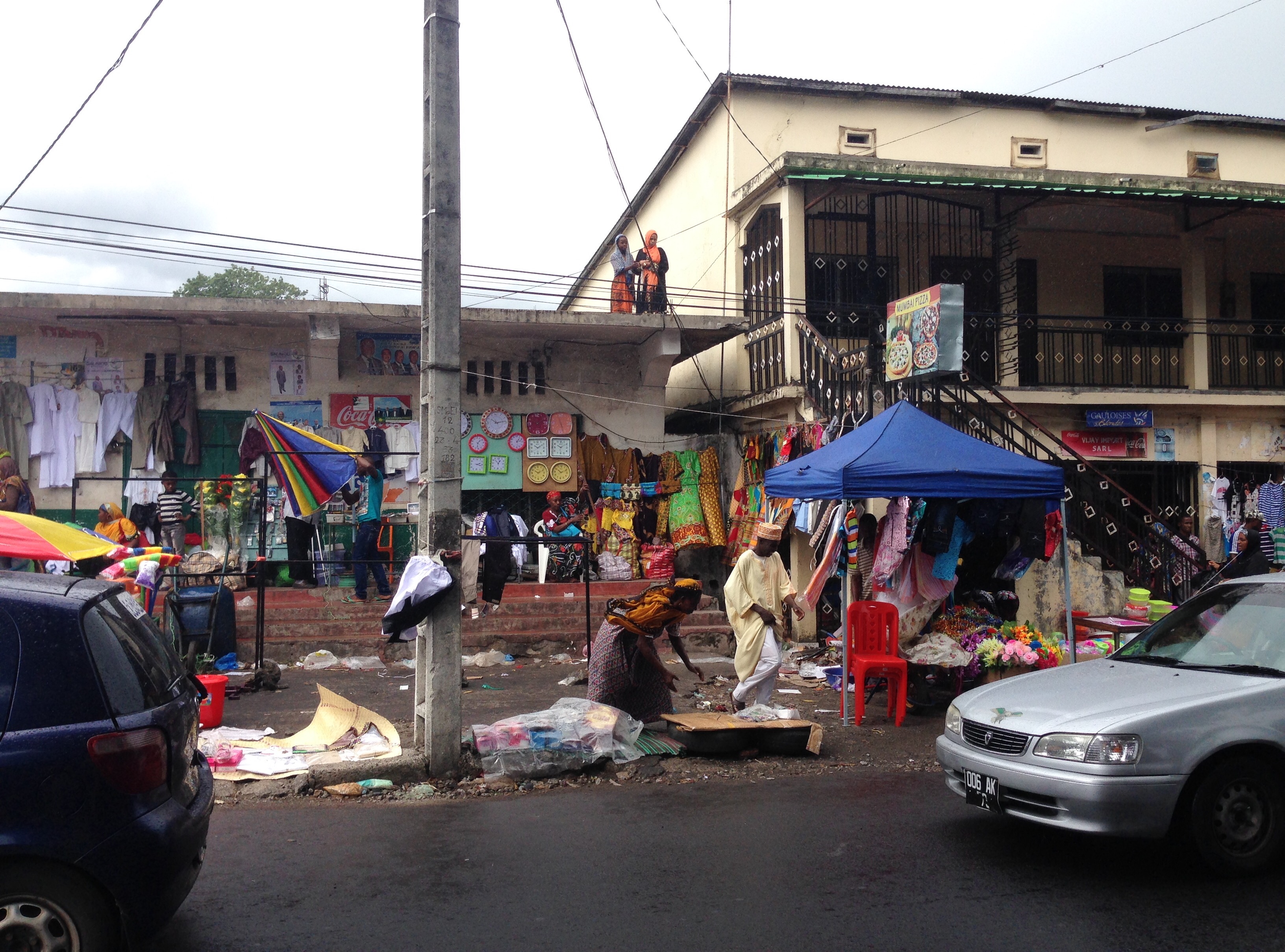 As a huge contrast to Tanzanian Zanzibar no one has even come close to harassing me with "very cheap prices" and other common tricks. Nope, Comorians simply greet me with a Salaam Alaikum (peace be upon you) or a Bonjour Monsieur. Everyone is super friendly and forthcoming if I approach them. No one has been over eager to sell me anything. Islam runs deep in Comoran history and Sunni Muslims account for around 98% of the population. 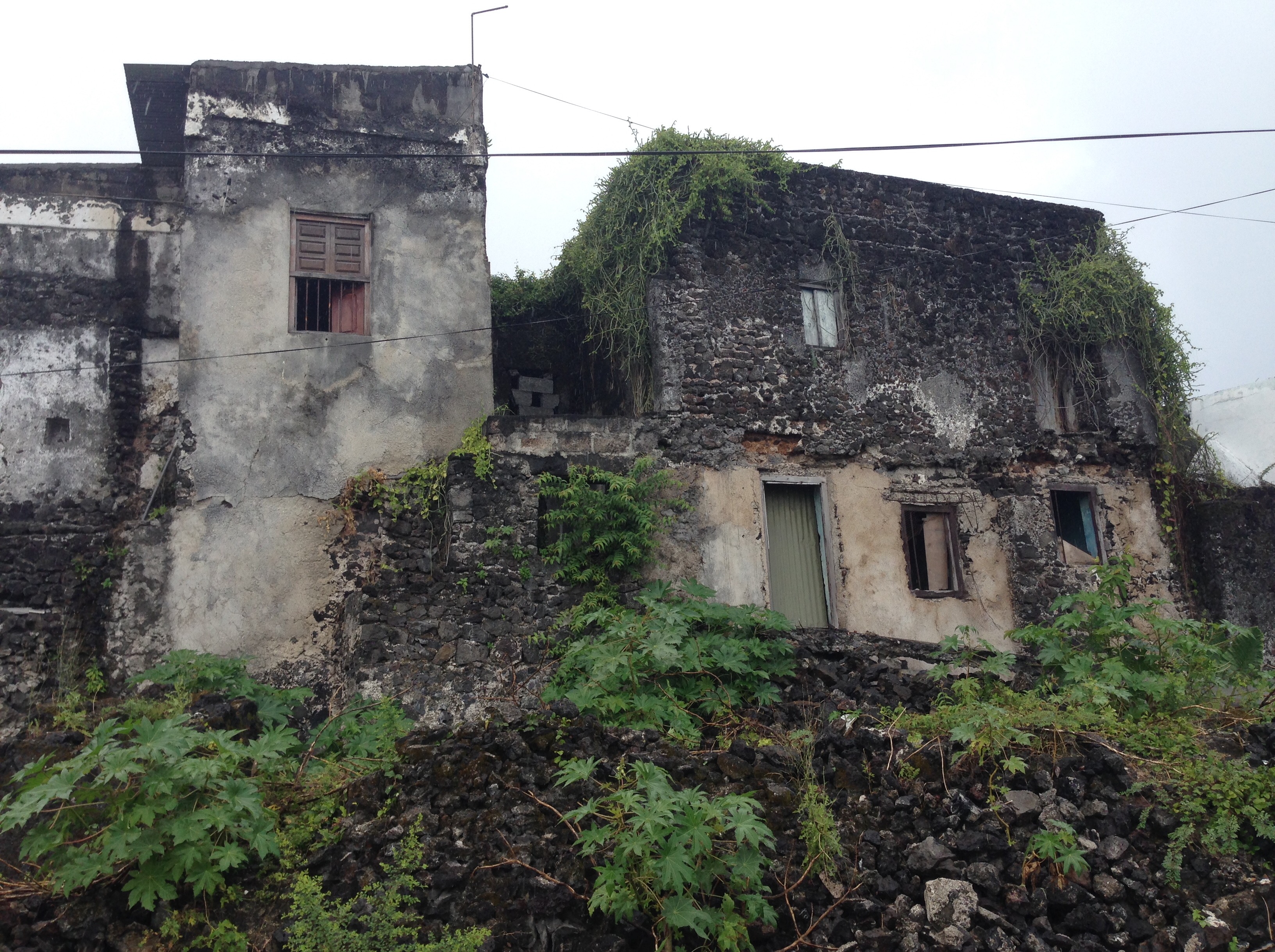 It's a severely poor country which would baffle anyone with a minor sense for business. Simply because it's made for tourism!! Beautiful beaches, friendly population, nature to hike in, an active volcano to stick your head into, fresh fish to be eaten, culture to be explored. On that note I believe this is the first country I have come across with multiple women wearing some sort of facial paint? It immediately caught my eye as I disembarked the "Aziza" which had brought me to Comoros from Dar es Salaam. 5 days at sea with a few passengers, a few goats, a few cows and a lot of cargo. This volcanic island was a sight for sore eyes when it appeared in the distance. 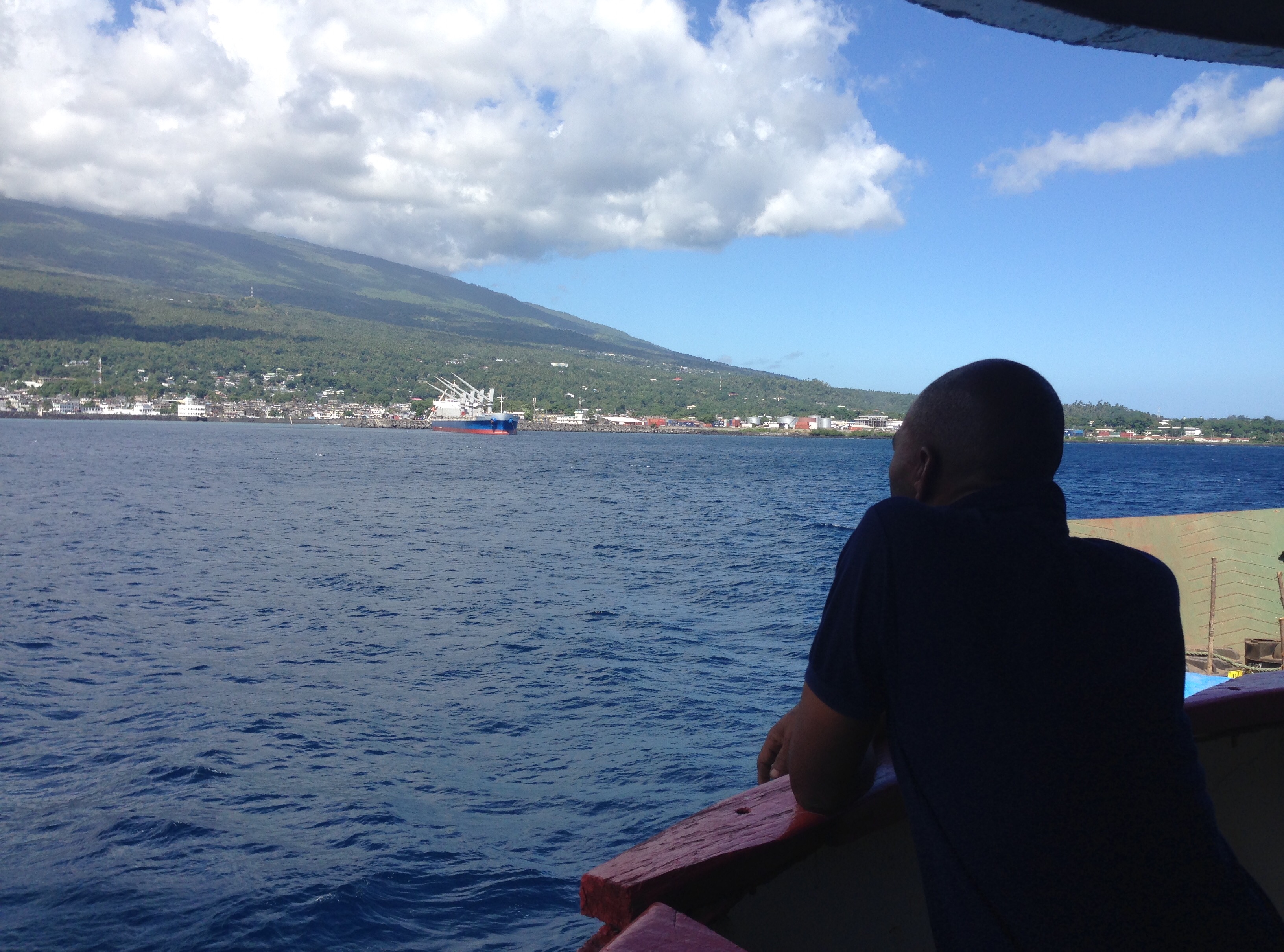 Immigration came onboard and chaos took place for a while as if this was the first time they had ever received a boatful of passengers. And I'm fairly sure it wasn't the first time! However as the dust settled and we were permitted to disembark the ship immigration was straightforward as the highest port authority, a mister Almiraty, guided us through the process. A visa on arrival costs the same as a visa at the embassy: €30. I paid for it then and there, received 5 stamps in my passport and was released into Moroni, the capital city (town) of the Comoros islands. 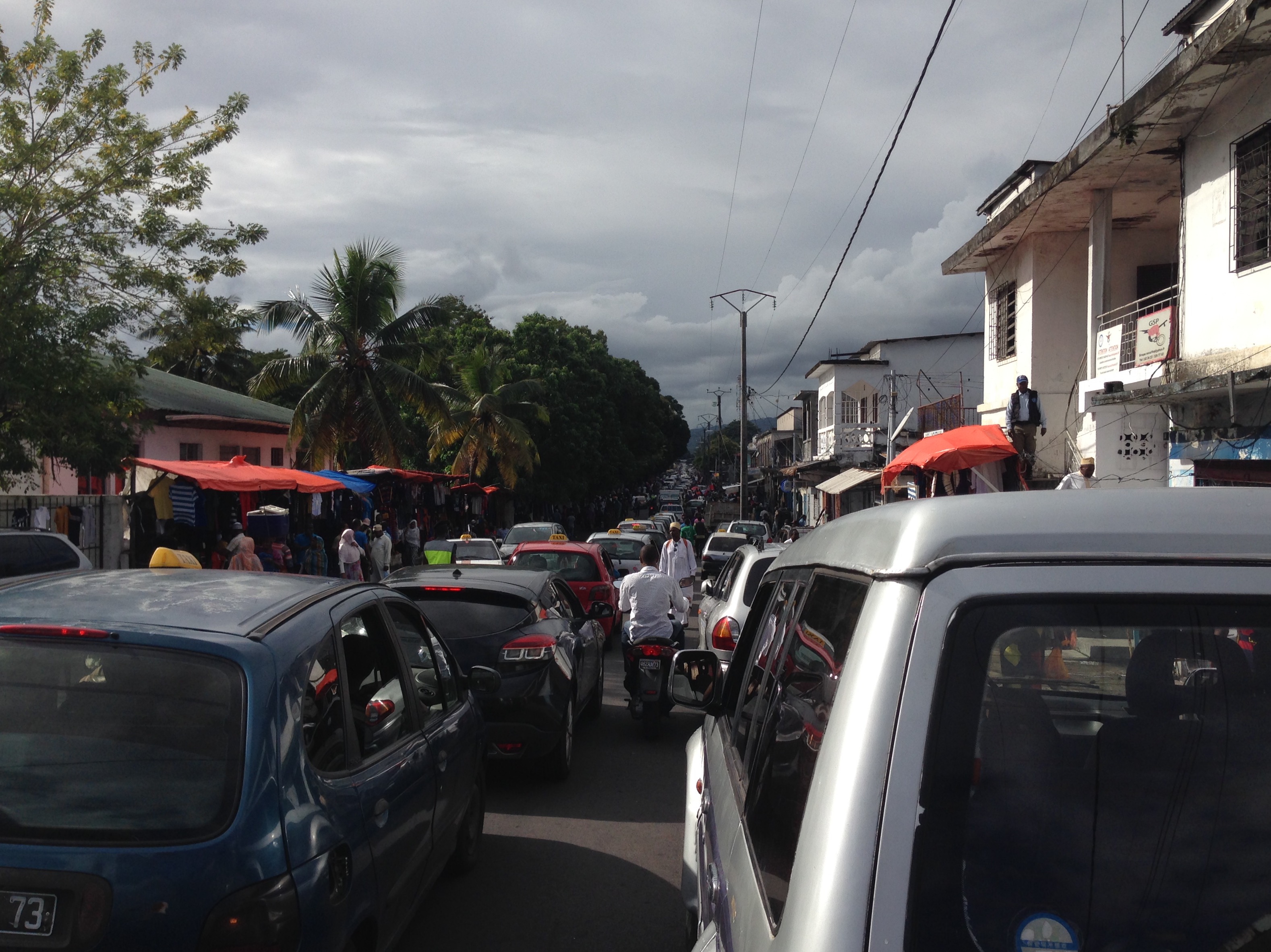 That is when I began to notice these painted faces among several women in the streets. It's known to foreigners as the "Comoran mask" and consists of a paste of ground sandalwood and coral. Apparently as protection from the sun. Amongst Comorians it's known as "msinzano". Traditional Comorian women also wear colorful sari-like dresses. 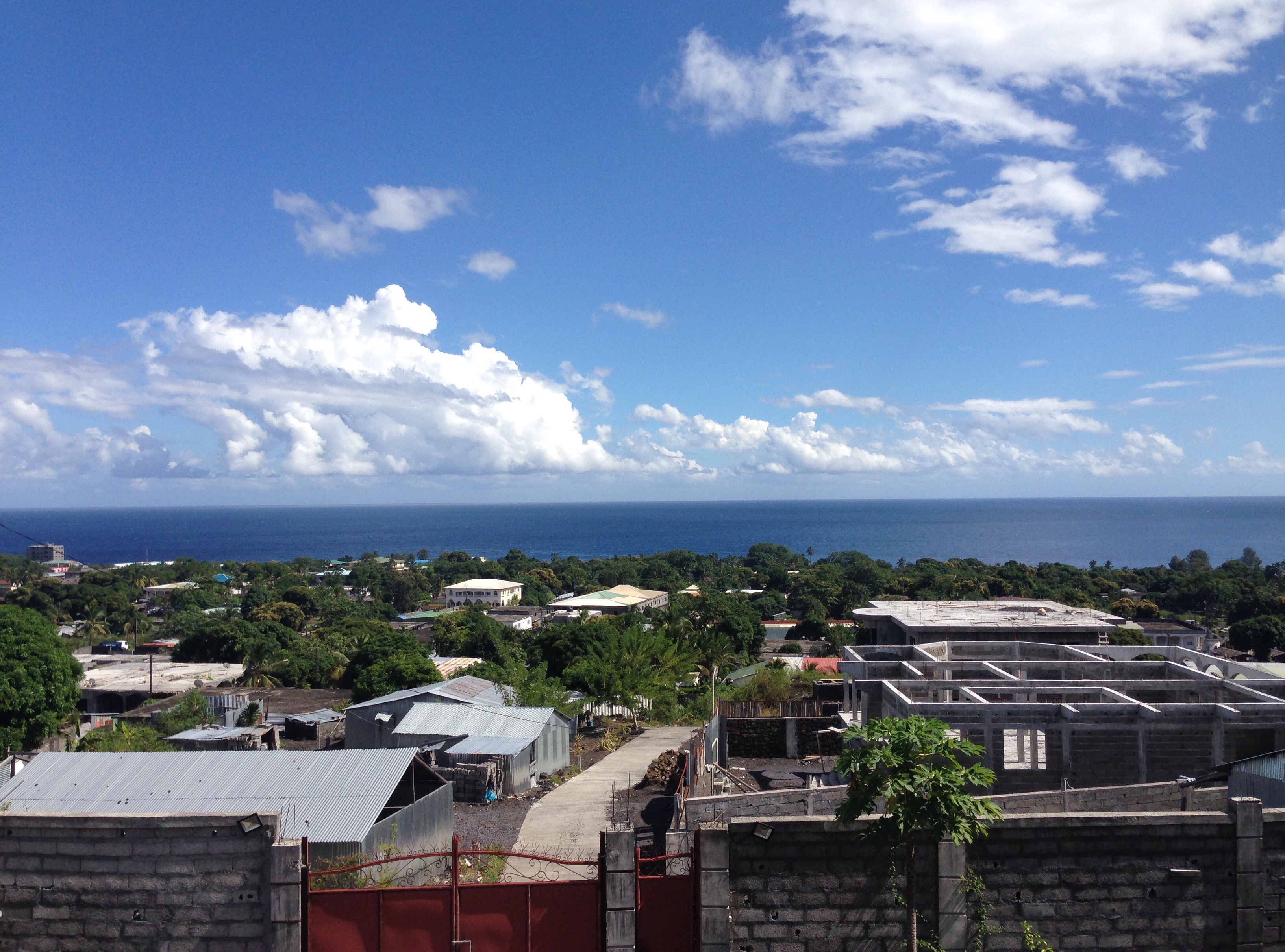 I've found my way into a part of the already small expat community. Comoros is only about 800,000 inhabitants and with a handicapped economy there isn't much of an expat community to begin with. However the ones I have met are great! One night I was invited to dinner in a flashy house with an extraordinary view and a spectacular garden. It costs less to live in that palace than to live in my apartment back home?!? So good for them. I was served rum with banana and later on wine and dinner. Amongst us were Alexis and Julia from France, Raf and Annalis from Belgium, Elodie and Leo also from France, Audrey from France and Martin who was only visiting for a few days...but also from France. However they all stayed kind to me and kept conversations in English. Mercy on their souls! ;) 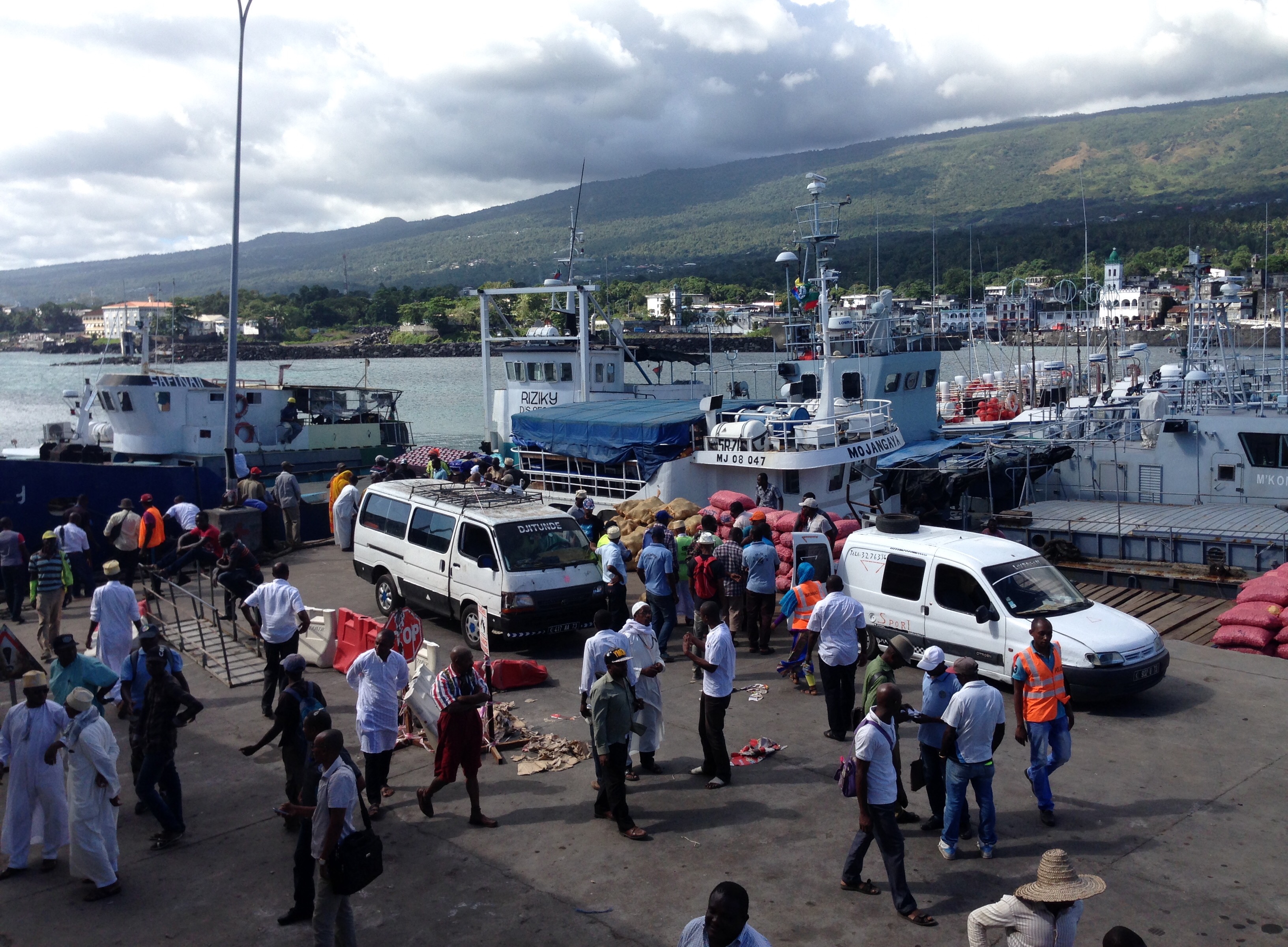 Since Raf works as a mechanical engineer at the main port I hooked up with him again a few days later. He showed me around and pointed me in the right direction regarding finding a boat ride towards Madagascar. Initially when I arrived onboard "Aziza" I saw two small cargo ships, "Mojangaya" and "Riziky", which were both offering to take passengers to Madagascar. So I automatically thought that finding a ship would be easy. However Raf told me that those 2 only come around once every month! They just happened to be there on the day I arrived. 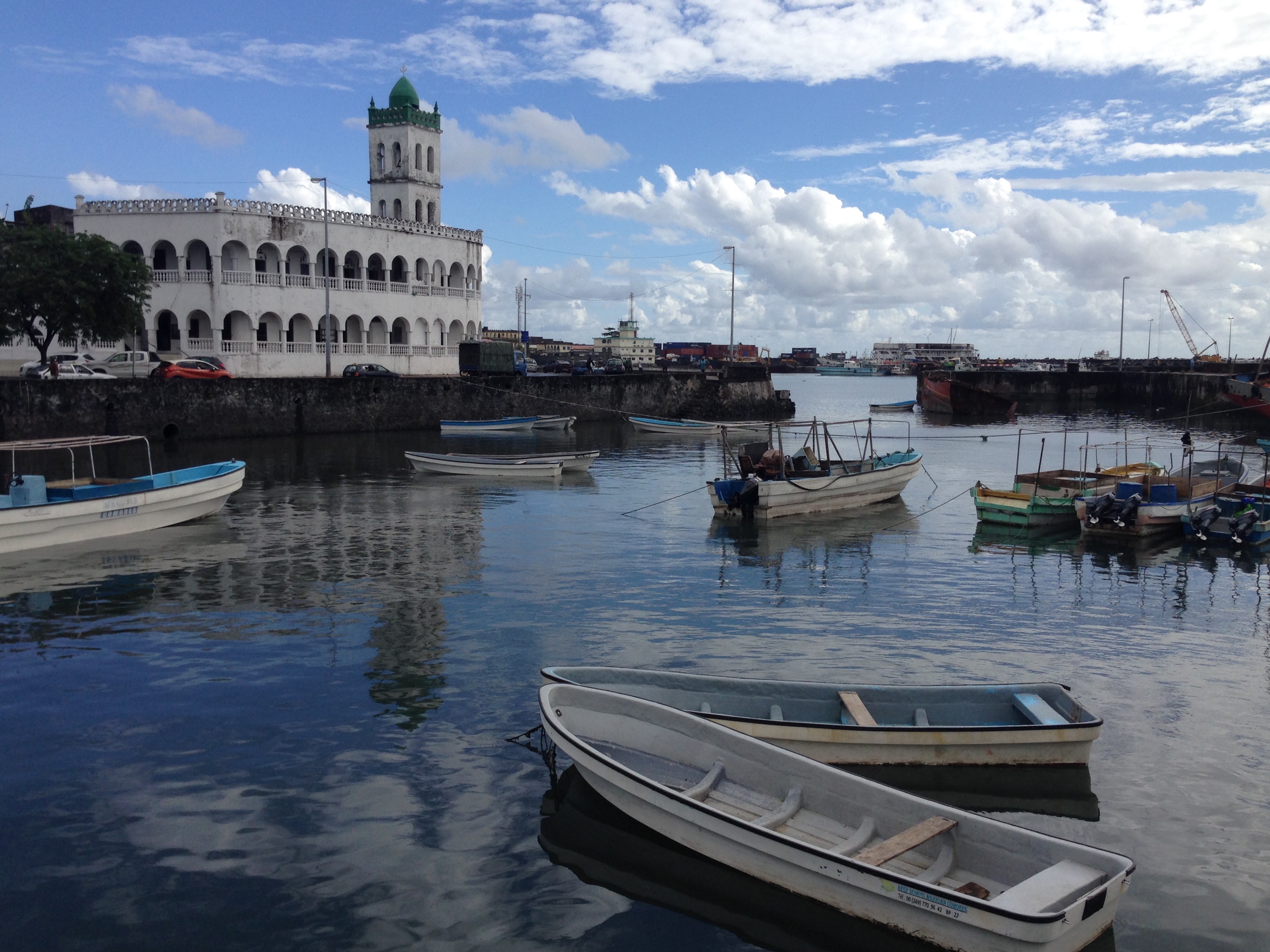 There's another option; a ferry departs every Wednesday but charges €150!! That's a pretty steep price on a $20/day budget. So let's see what gives...I might work something out one of the upcoming days. I'm keen on mowing onward soon. However I'm also really hooked on trekking to the top of the nearby active volcano known as Karthala. It can be done within a day (up and down) if you start early in the morning. 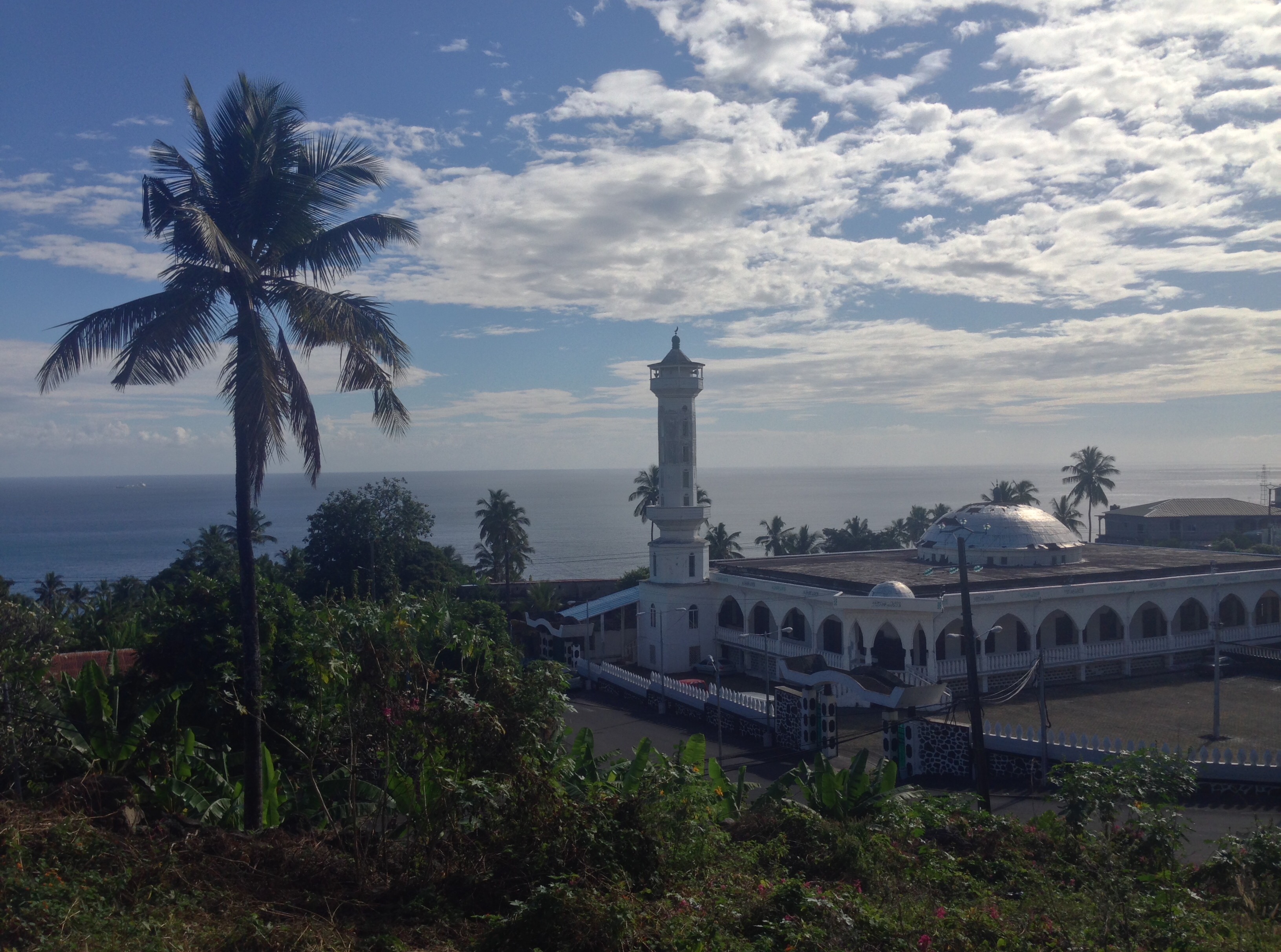 We're within the month of the Ramadan which is a holy event for Muslims all around the world. It's a month of fasting between sunrise and sunset. During the remaining hours they can eat and drink as they please. It's supposed to be good for a number of things and not only being strictly religious. I imagine there must be a lot of social bonding for people who are all going through the same thing while looking forward to dinner. Apart from that I also see that it strengthens discipline in some ways. Anyway...its naturally a big thing in a country with 98% Muslims. 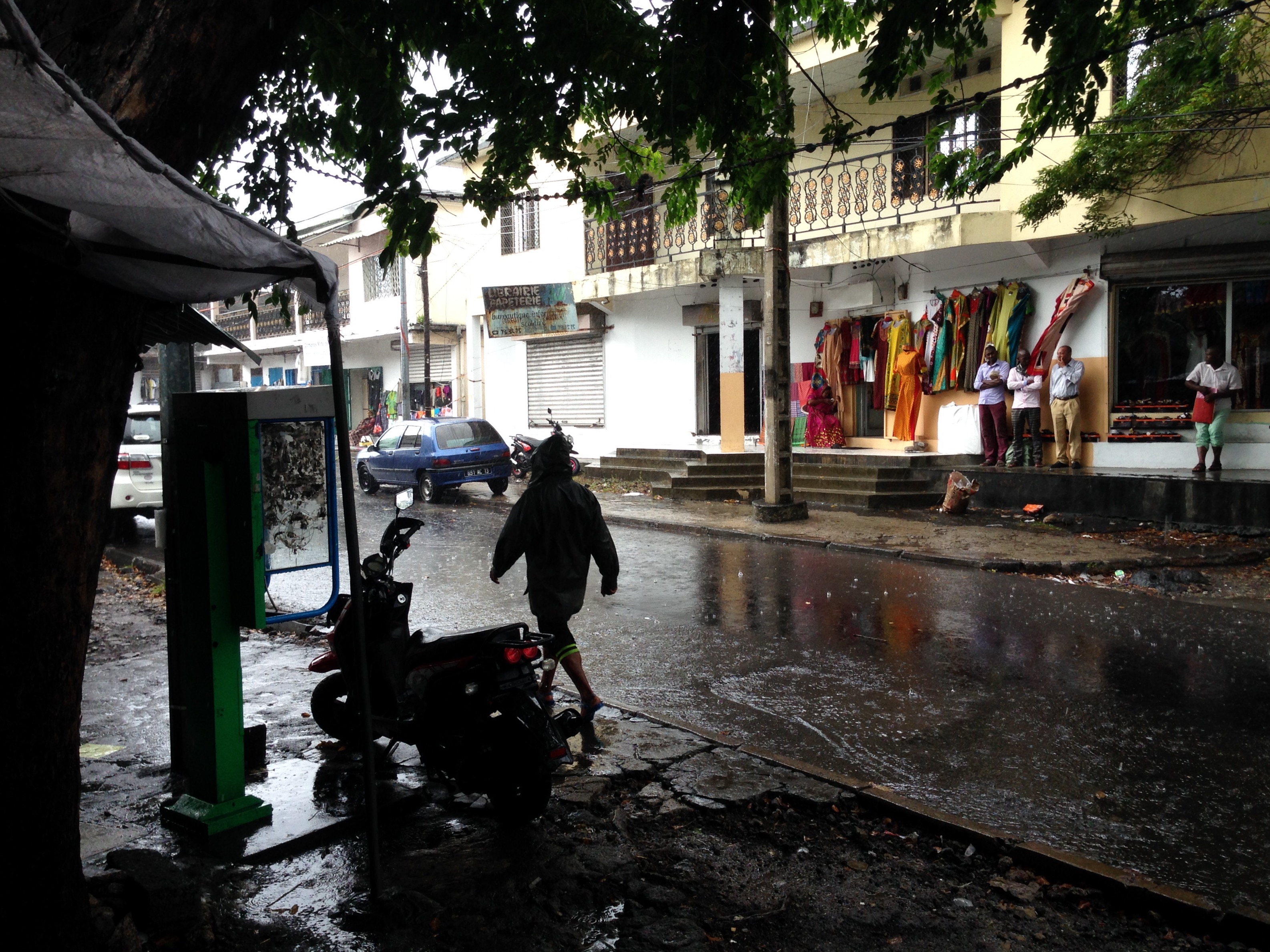 And it's a bit of a shame for me. Because I walk around Moroni seeing all these potentially nice looking restaurants and coffeeshops which are all closed during the day due to the Ramadan. Besides many places close early so I need to get stuff done as early as possible. Internet is a bit of a headache as there are constant power cuts and a general lack of wifi. It's available though of you know where to look for it. So is food during day hours although I consider it immensely impolite to eat and drink in front of anyone who is fasting. 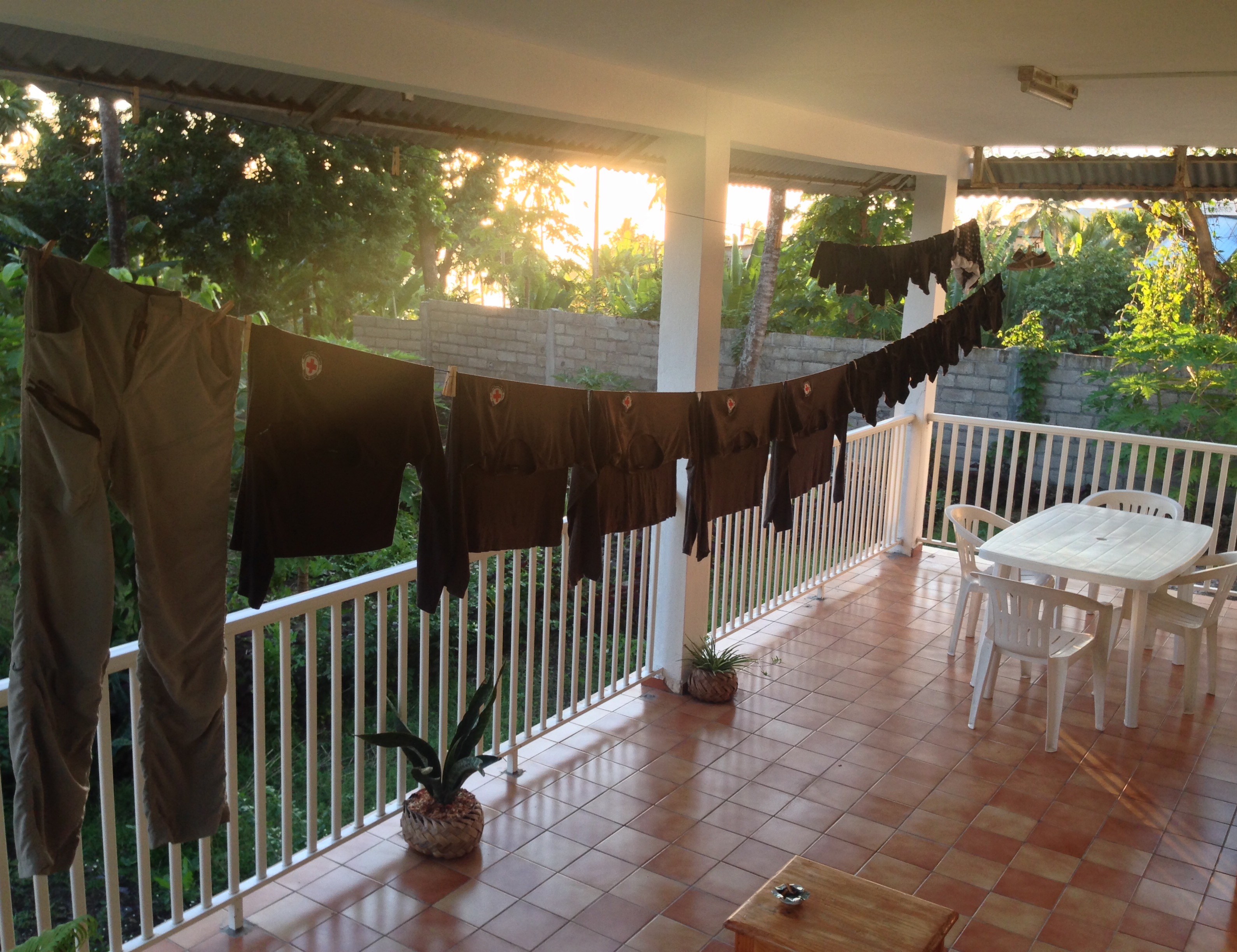 You would most definitely get away with eating in front of a fasting person though. The population is too polite and too passive to object. In general were not at all talking about religious fanatics. Quite the opposite with alcohol available in public places and a general easy moderate attitude to religious doctrines. 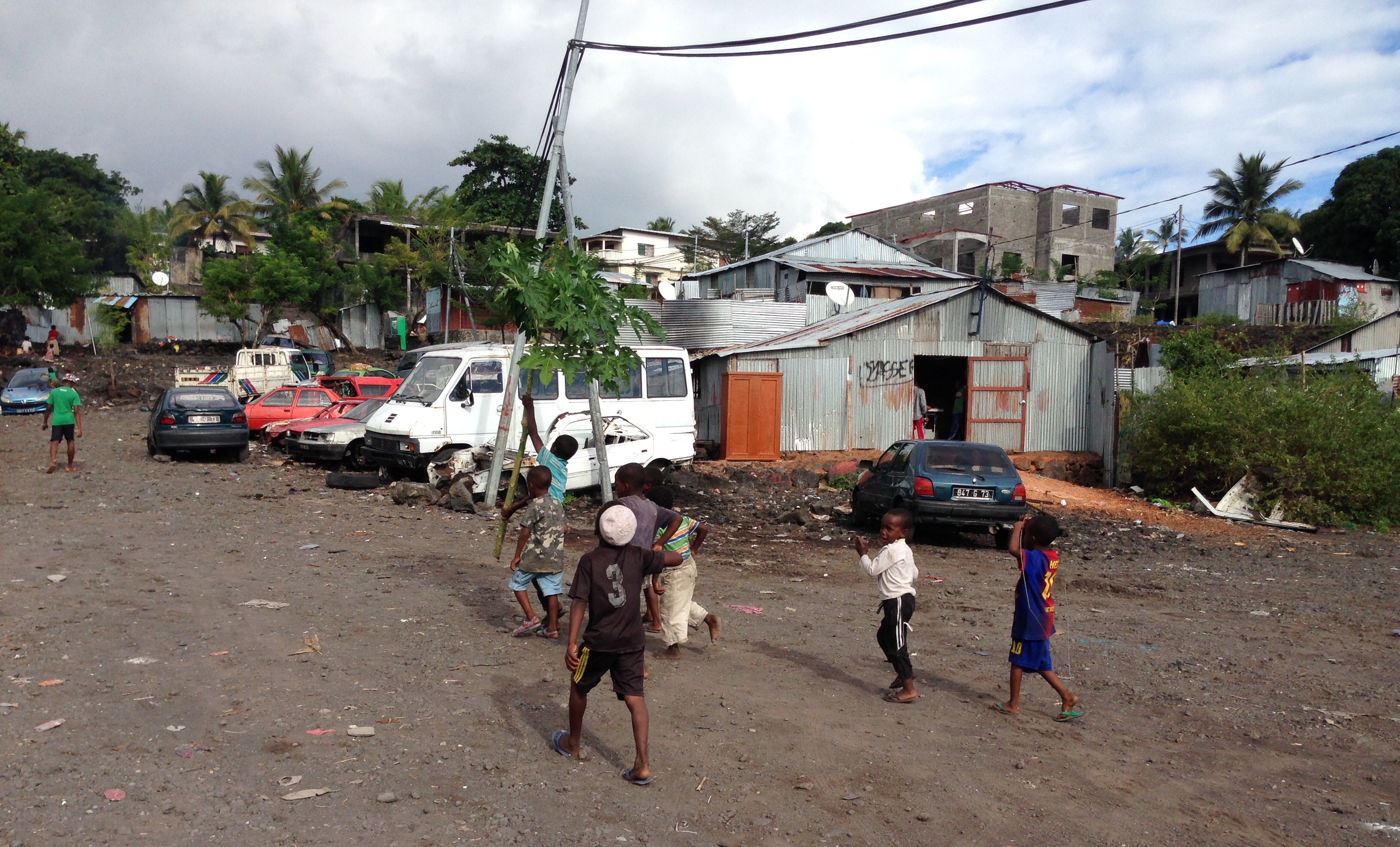 So what do I think about one of the worlds poorest countries? I think the population is asleep...as are most people in the world ;) Nothing comes from nothing. Go to sleep early and wake up late will not work for most people. As well as working hard all day may not make you a millionaire. Work smart. Dream big. Get started. Hold hands. Listen, learn and be patient...but not too patient. Smile, be kind and don't be afraid of what you don't know. Comoros should be rich! Perhaps someday you will be sipping your Bacardi here ;) 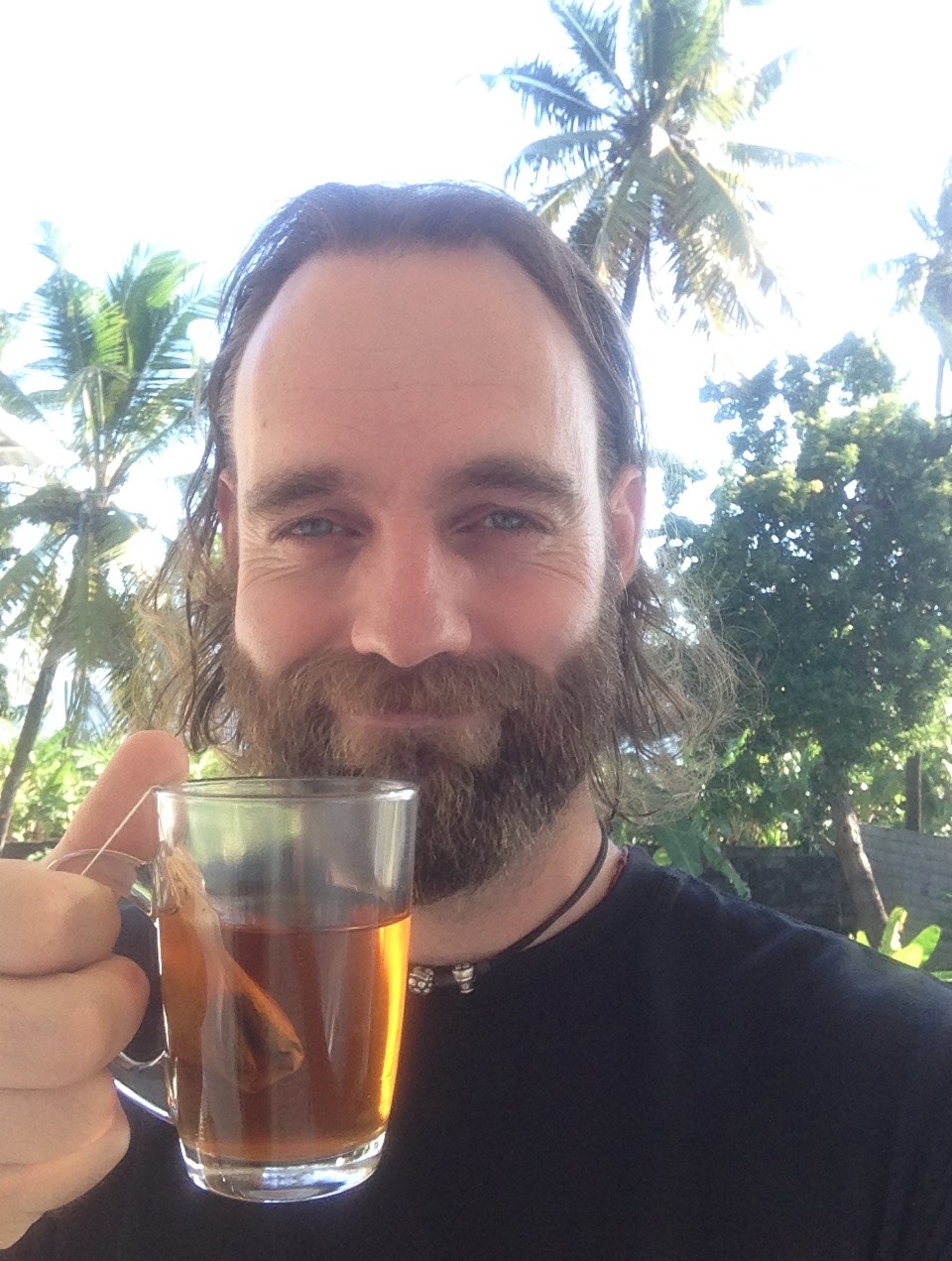 Best regards
Mr. Torbjørn C. Pedersen (Thor) - not a millionaire.
"A stranger is a friend you've never met before"
Once Upon A Saga
facebook.com/pages/Once-Upon-a-Saga
instagram.com/onceuponasaga
twitter.com/onceuponasaga
youtube.com/channel/UCSy7qFQzxM9VOaMeOfYia_g
linkedin.com/profile/view?id=41191761
blog comments powered by DISQUS back to top

Close call with a van! https://t.co/GmpOIszSvR

Last night I had the pleasure of meeting up with Marcus and Phil from at the newly opened #SoHoHouse in Hong Kong 👍… https://t.co/21fwFhK2NZ