Hong Kong has been good for the Saga - let’s go!

Nothing is so bad that it isn’t good for something

Am I the only one tired of hearing this phrase: “not this month but perhaps the next one?” Sure not! Hasn’t the entire world been in that situation long enough?

Tough times all around. If you missed last week’s entry then you can find it here. It was pretty good and the last time I had a drop of alcohol. Now the focus is on completing the 78km (48.4mi) highly mountainous Wilson Trail!! It will be the fourth and last of Hong Kong’s ultra-distance trails as we have already conquered the MacLehose Trail, the Hong Kong Trail and the Lantau Trail. The later turned into a really nice video which you can watch here.

Just tap the image or click HERE to watch how we handled the Lantau Trail.

There’s is no doubt that I’m using the trails to cope mentally with the situation. There’s a time glass with sand pouring into the bottom half. I don’t know how many grains are left in the upper half but it’s not an endless supply. Quite fitting I’m at a cafe while writing this and the speaker is blasting out a bossa nova version of “should I stay or should I go now”. I’ve been contemplating what I want. I do want to complete the Saga and clock the final nine countries before heading home. And I know that will take no less than ten months to do. However I (like nobody else) haven't got any idea about when that might kick off? We’re just all asking each other in hope that somebody has an answer. Most of us have adapted to the new normal. Sometimes we hold our breath while passing someone and slowly exhale once we have moved beyond them. We are sometimes more cautious about something we touched and focus on not touching something else until we have scrubbed those hands clean. Masks are still the norm here in Hong Kong where we started hoarding toilet paper long before the western world. But life is going back to normal. The demonstrations, which had Hong Kong in the media before COVID-19, have been flaring up again. The Savagar’s who have been hosting me since I arrived are also finding a new normal. The oldest of their sons (12y) started school again last week. The youngest one (9y) will turn a year older in a few weeks. He very excitedly started school this week. Both of them on a half-day basis but they seem very happy. Their parents went back to work but ironically were advised to stay at home last Wednesday as the demonstrations were back (at least for a day). If it isn’t one thing then it’s another. Hong Kong is on a path to become completely observed by mainland China and the date at the 1997 handover was set for 2047. In Beijing a series of changes to how Hong Kong operates have been decided upon. This doesn’t sit well with everyone in Hong Kong. So there are two sides like in any argument and am not choosing any. I want to remain neutral and remind everyone that I’m a guest here. Besides as a goodwill ambassador of the Danish Red Cross I have a good excuse to stay neutral. The Red Cross is always impartial and neutral. The news reports that there’s a movement among the protesters to gain favour from the President of the USA. Some analysts warn that if the USA gets involved then it would give certain authorizes an excuse to respond more aggressively. Who knows? It’s highly complicated. It may seem simple on the surface but it truly isn’t. If you’re going to take sides then I advise you first to study the situation well. And once again...I’m staying out of this one. 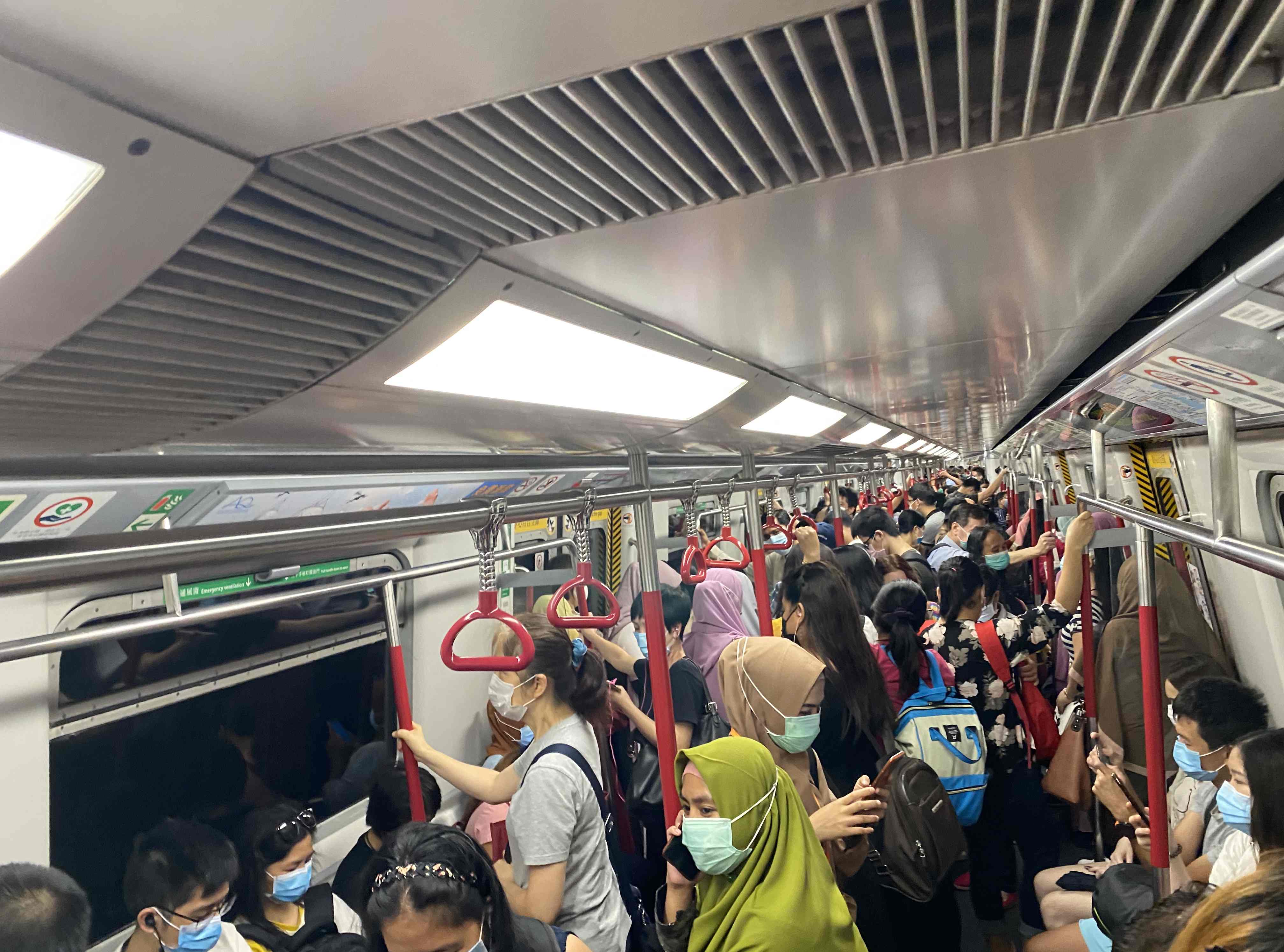 Eid Mubarak! Hong Kong has a small muslim minority but they were visible last Sunday as the eid began! :)

This is going to be a short entry. You should know that being stuck in Hong Kong has been a blessing on many fronts but not a vacation or a rest. It has been a mental battle. Because as I mentioned I want to complete the Saga. However I also want to go home. I’ve been wanting to go home since 2015. I want to spend time with my parents before that’s too late. I want to wake up with my fiancée. I want to be there for my friends and family. There isn’t an unlimited amount of grains in that time glass. Yet it is undeniable that Hong Kong has been good for the Saga. Followers across social media have grown remarkably which is great. That means that the values of the Saga are reaching further and it likewise benefits the projects partners. I’ve without a doubt done more interviews out of Hong Kong that anywhere else on earth. I finally feel that it’s quieting down after a hectic month. Can you believe that it’s been more than a month since the CNN article ran and started an avalanche of interviews and collaborations. It’s usually “15 minutes of fame” but this turned into a month. It’s down from three interviews per day to about one per day now. And that will decrease further. What a ride! I’m a lot fitter now than I was when I left the ship on January 28th. I run regularly and then there have been all the ultras. I have an extensive network across Hong Kong and some really good friends. I’ve experienced four birthdays under the Savagar’s roof and it looks like I might get a fifth. There have been several wonderful collaboration with schools, companies and organizations. Last weekend I was invited to join the World Wildlife Foundation (WWF) for half a day. They reached out and invited me to visit their Oceans Celebration event at Hoi Ha Marine Park. As a child I was a member of the WWF and received a magazine with pictures and stories about animals and how to preserve the environment. 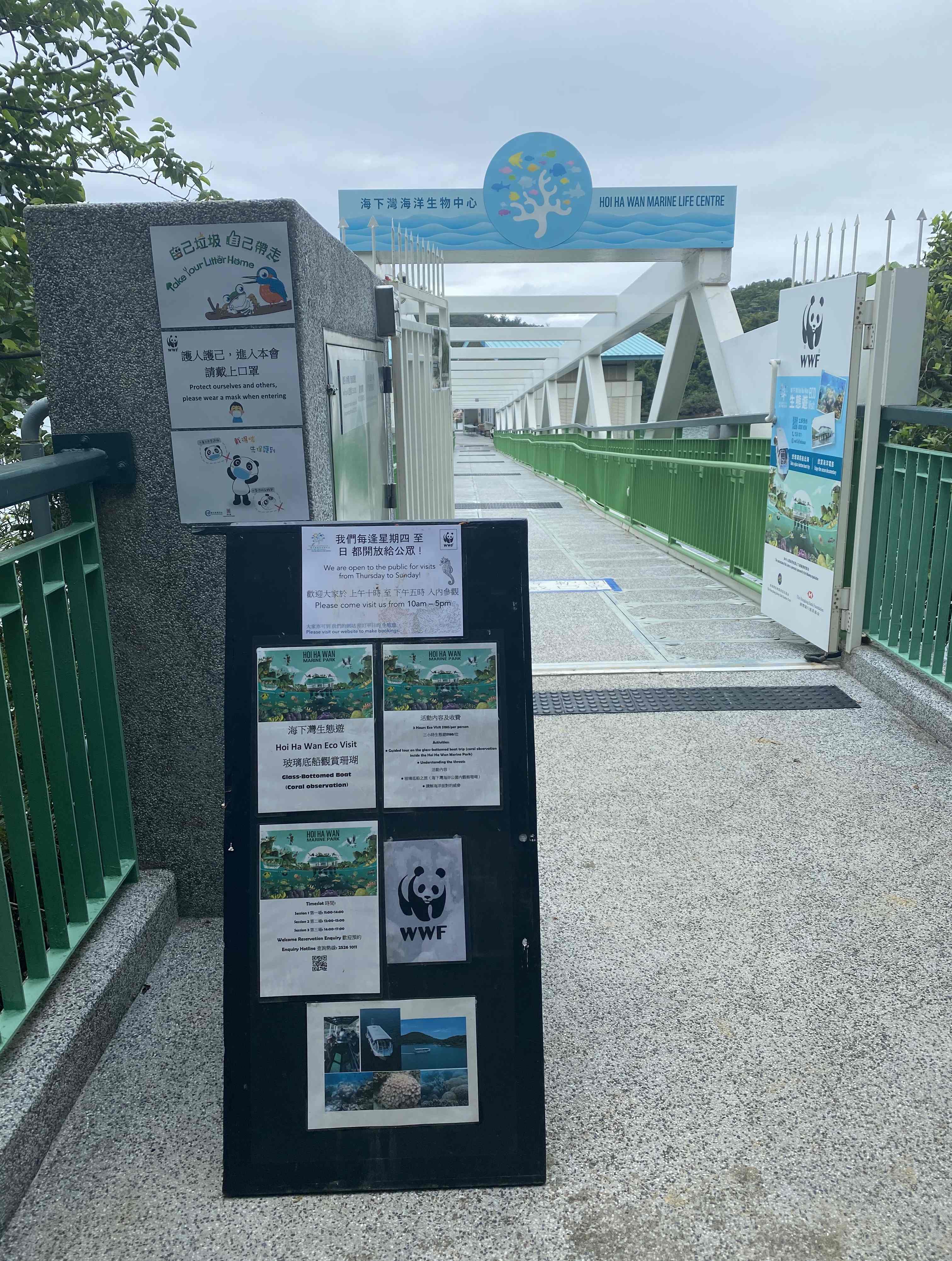 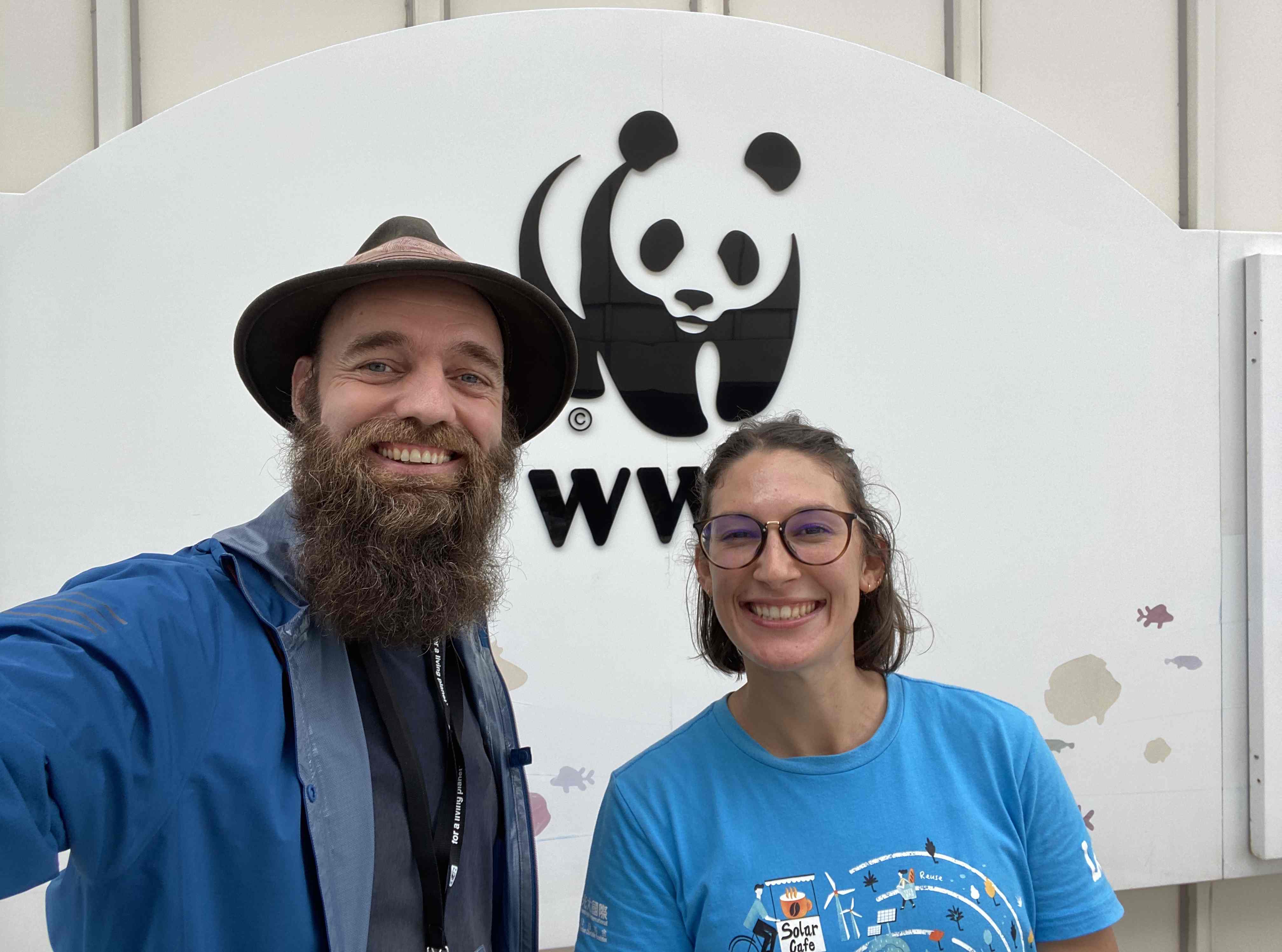 The very kind Pia Ricca and I before the WWF logo.

WWF was founded in 1961 and is today the world’s leading conservation organism with a global network across a hundred countries. On arrival I was greeted by Pia Ricca from France who runs the centre. And I’d truly recommend anyone to visit!! The location alone is spectacular. But so is the work they do. Before getting into the glass bottom boat we had a briefing on marine life and the harm which plastic waste does to it...and in turn ourselves! We are literally eating plastic at this point. While people are just people I’m ashamed of that element within us. What’s wrong with us? How is it possible to have “disposable plastic products” when we know it will outlive us on this planet when discarded? I learned a lot about corals too and after the boat ride I joined in on a Cantonese presentation called: “Sharks: Friends with Fins”. While I don’t speak Cantonese I still understood the message: we are not on their menu - sharks should not be on ours! Hong Kong handles at least 50%, and possibly up to 80%, of the world trade in shark fin. Yeah...the WWF is doing a great job. 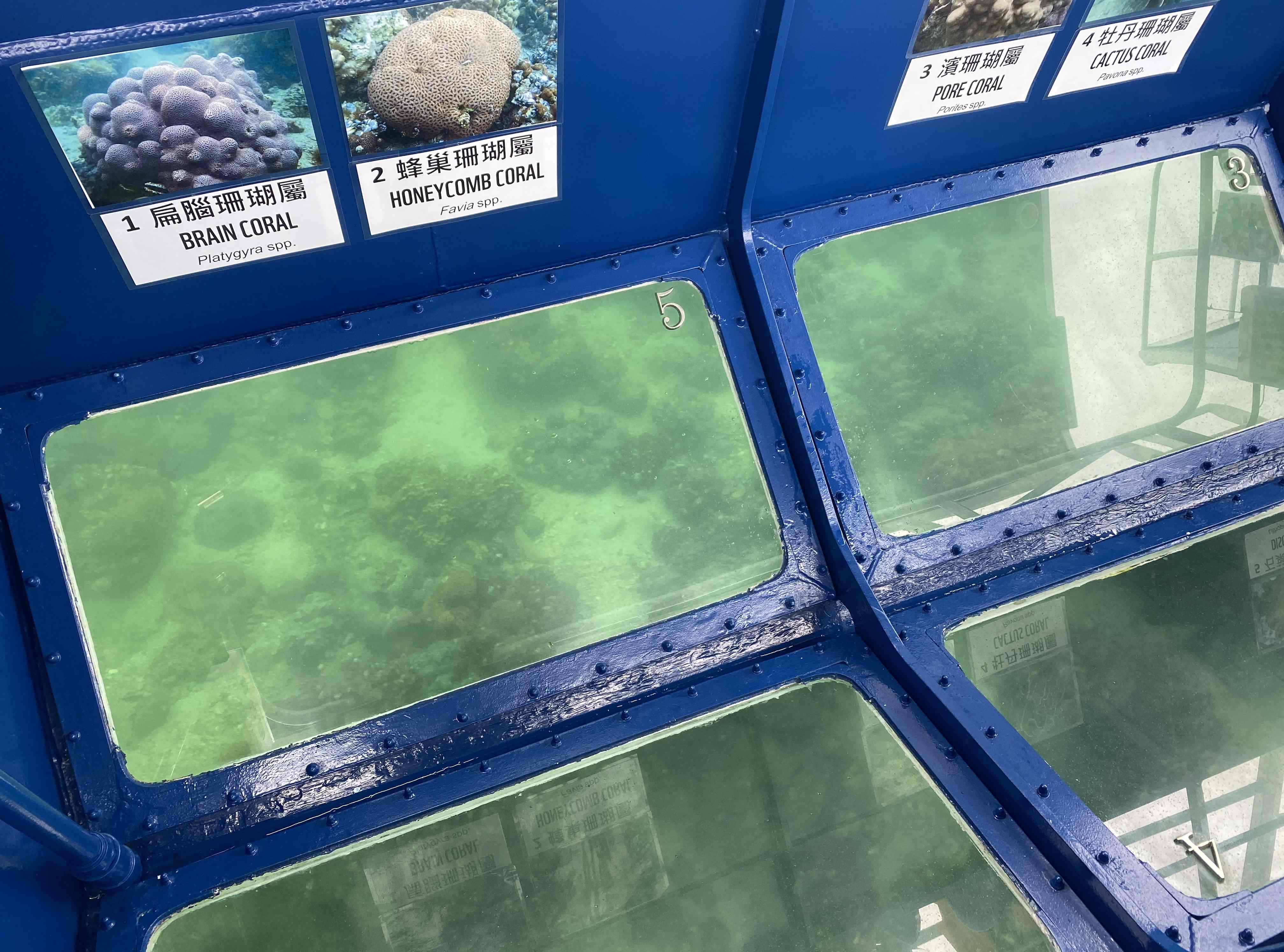 Spotting corals and sea cucumbers through the glass bottom boat. 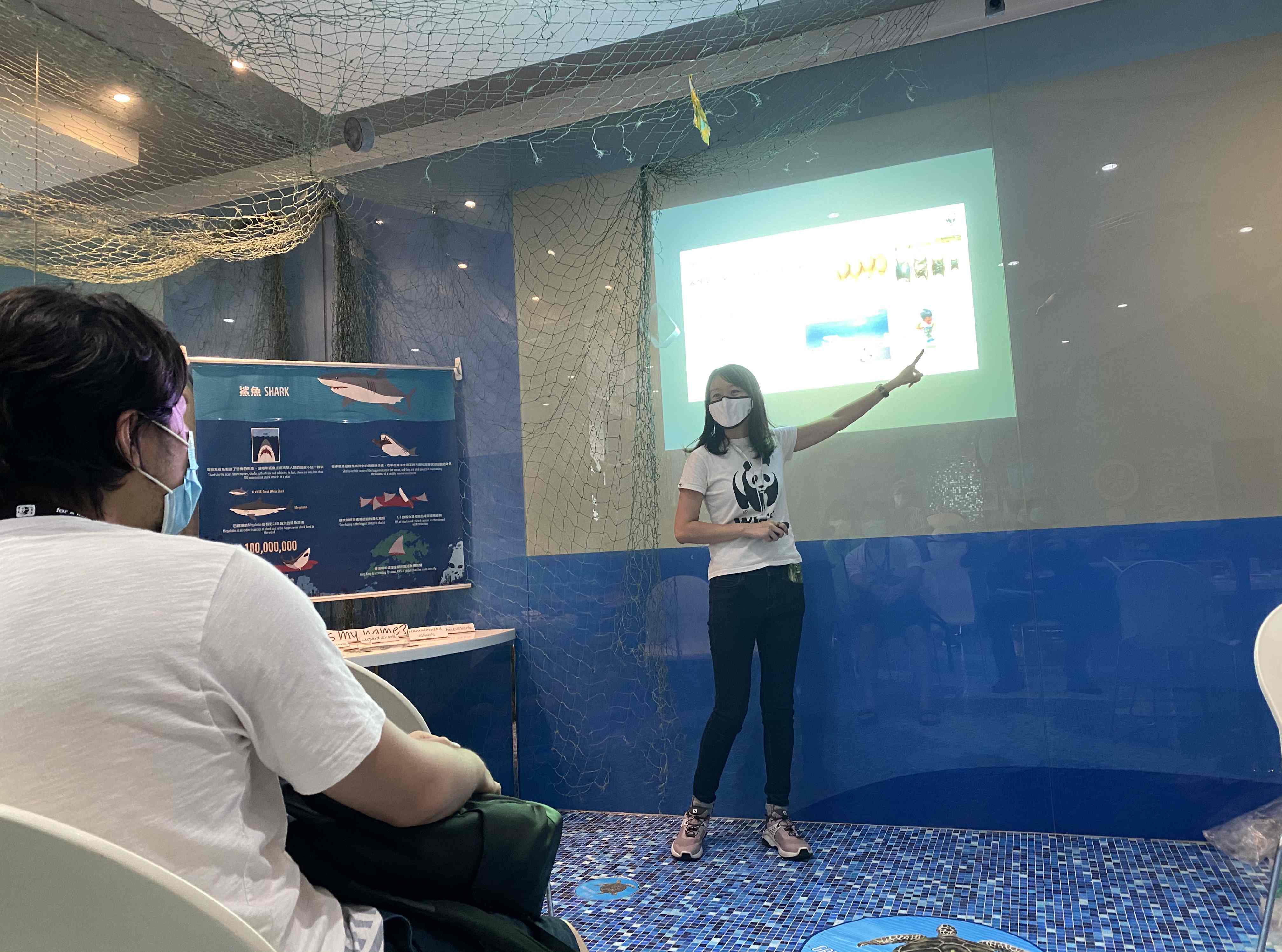 Sharks are our friends :)

This past week has been one of many good encounters. Am I happy? Well that seems like an existential question but I probably couldn’t be doing any better given the circumstances. I received yet another invitation to join the Leung’s for dinner. They are such kind people and it offered a nice oasis of quiet, kind comfort. My leg into a seat at that table goes through Svend from the Danish Traveller’s Club (DBK) as his lovely wife Ophelia. Both Svend and Ophelia work at SAAB and have been really helpful in an abundance of ways. Most recently Ophelia delivered the “new” Saga uniform to me at their office. It looks a lot like the one I’ve been wearing for the past 2.5 years however it now features three new elements on my left arm: Geoop, Ross DK and Denmark. I’ve always wanted to have ‘Denmark’ on the uniform but it seemed wise to be country neutral while going through some countries. With the remaining nine that shouldn’t be a problem at all. Geoop and Ross DK are the official financial partners of Once Upon A Saga and I just wanted to add them something extra for all their loyalty. They did not demand that I added it to the uniform...it was my choice and it looks good.Since Ophelia handled every arragement in getting the cloting done I had to ask her how much I owed her. She replied: "give me all your Egyptian pounds and Mongolian tugrik". It has been something of a joke for a while. I spent way less time in Egypt and Mongolia than aticipated and left both contries with too much spare money. For years I've been trying to exchange it but those are tough currencies to sell. We sort of figured I'd have a chance somewhere in Hong Kong and maybe that is true. But I never found that place and I have looked. Now I'm not particularly supersticious but sometimes I wonder if there are certain things which need to fall in place before I can move on. Such as: perhaps the universe will keep me "imprisoned" in Hong Kong until the pounds and tugrik have been traded?" Nonsense of course...but? No...it's silly...but? Anyway...Ophelia wanted to help and took them off my hands as part of the payment. 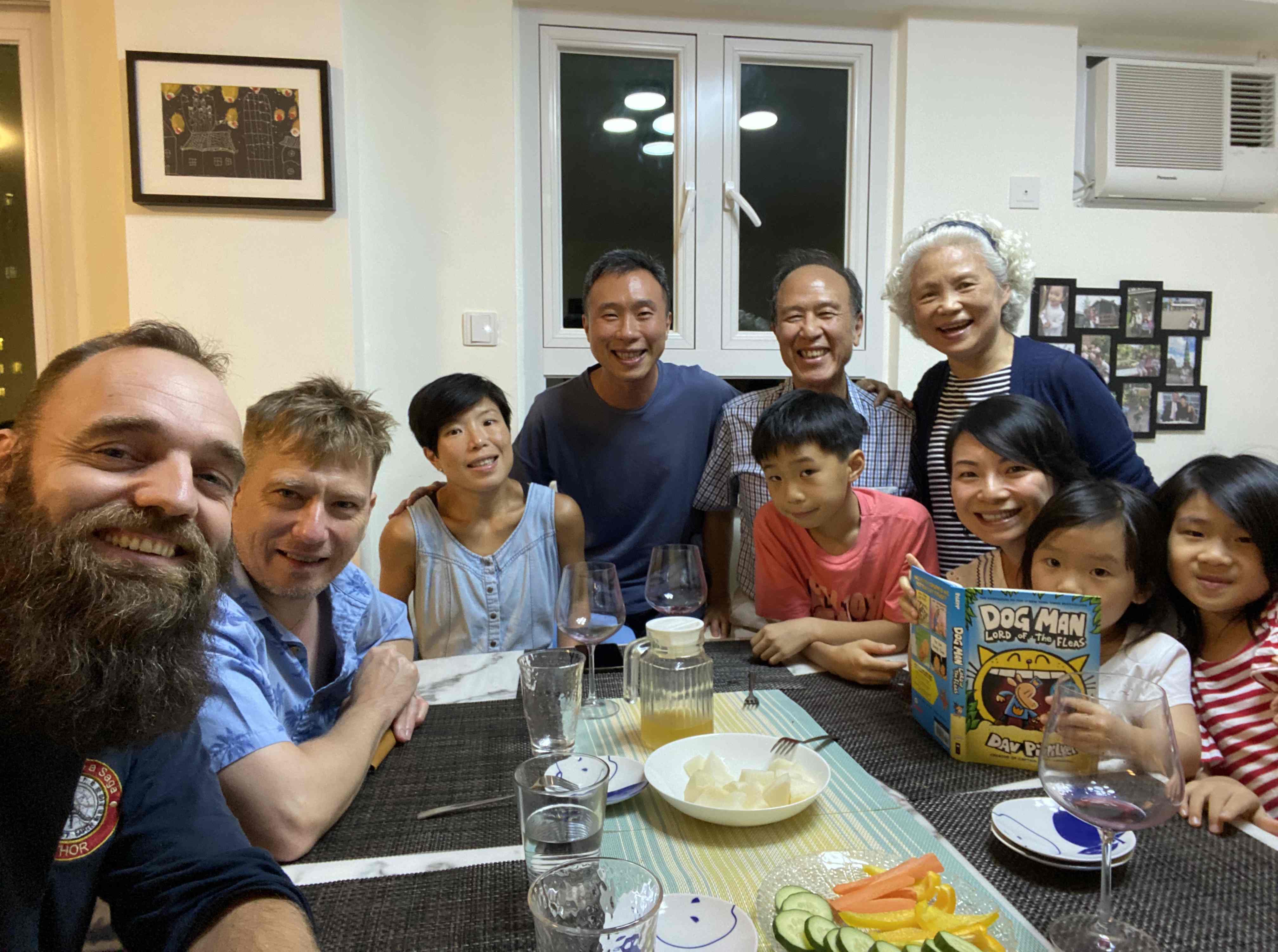 Hanging out with the Leung's. Ophelia has a wonderful family :) 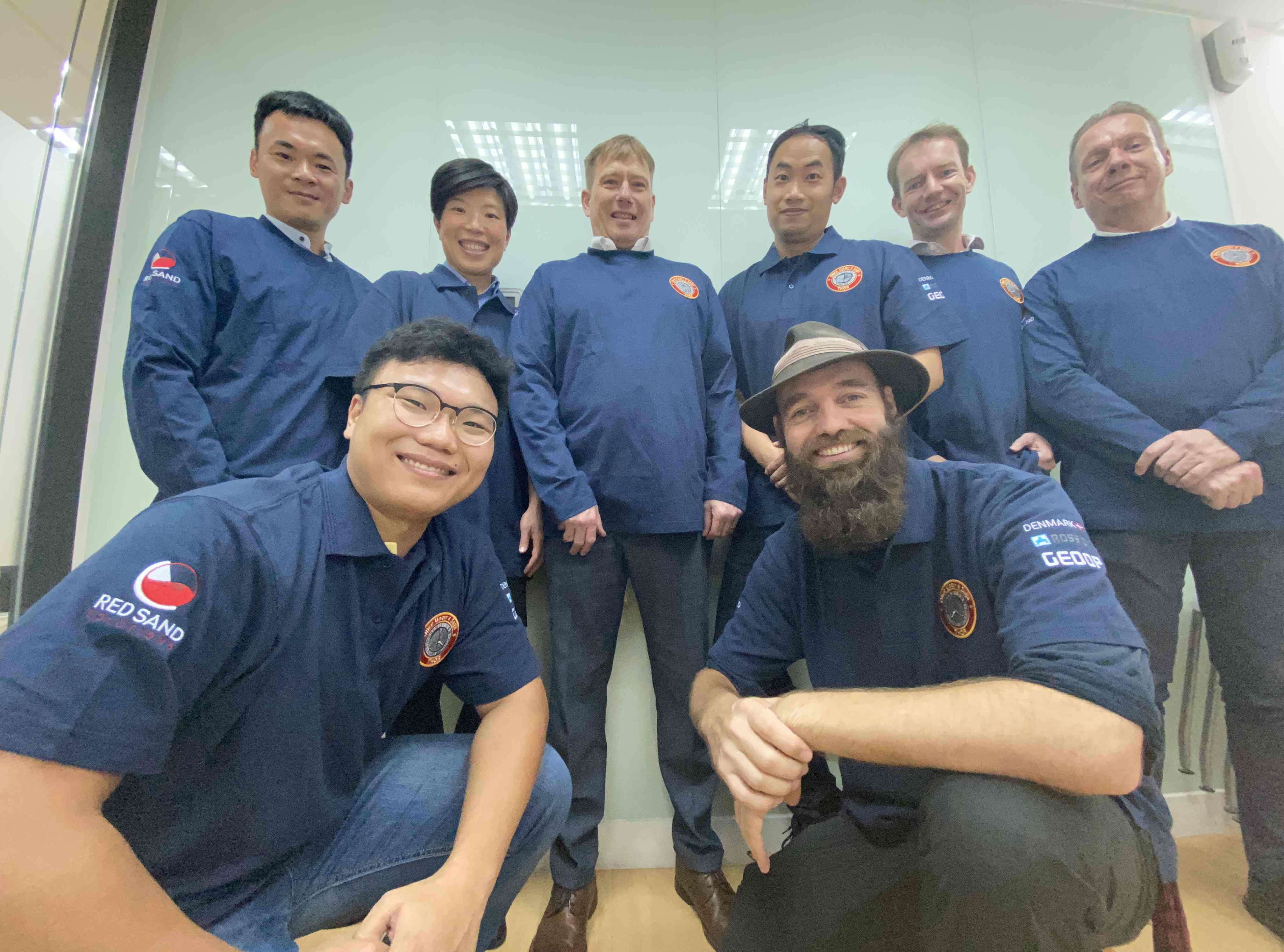 TEAM SAGA! Don't we look sharp. We will be traveling together to the remaining countries ;) Not quite. But the SAAB team did accept to pose with me :)

And that’s just about it for this week. The entry could have been three times longer if I chose to mention everyone but that always seems to be the case. I’m grateful to everyone I’ve met, corresponded with or have heard from. Hong Kong has been kind and who knows how much longer we have here? I’ve been in dialog with Pacific International Line (PIL) and Swire Shipping | CNCo to hear what’s possible now. Not much it seems but they are keen to help. Not this month but maybe the next. Let’s see and keep on keeping on. 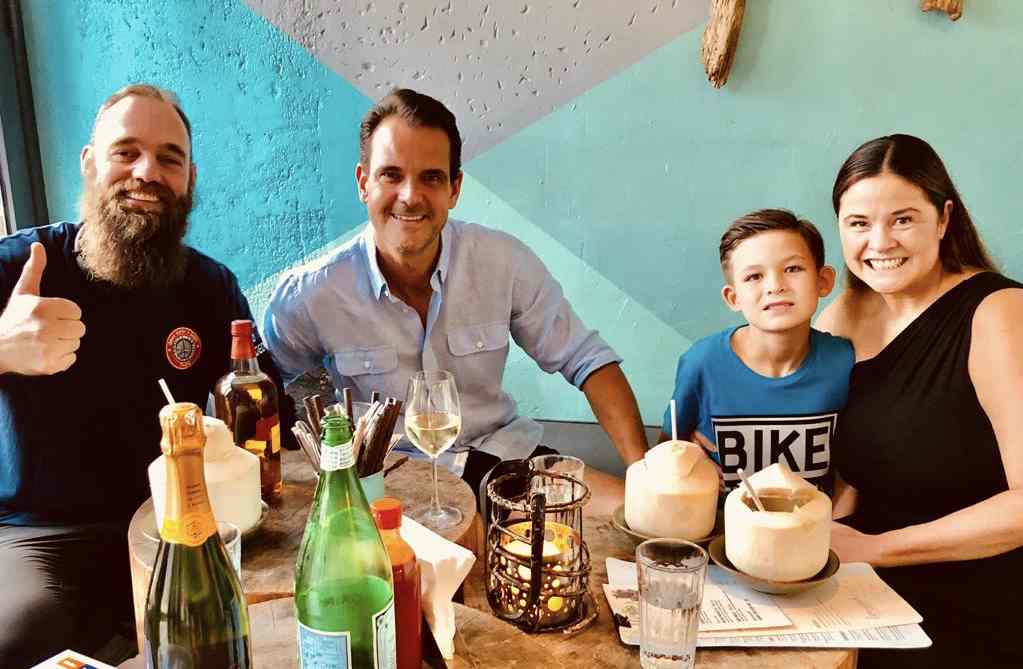 Dinner in fine company! From the left: Ole, Sebastian and Marcia :)

Best regards
Mr. Torbjørn C. Pedersen (Thor) - Thankful for all the kindness.
"A stranger is a friend you've never met before"

@Not_TophU Yes by far, the previous record holder was Lebanon with 102 days. Hong Kong rings in at 155 days now.