My final days - Love from Benin

The one who does not dream slowly becomes mad

Thierry with his son Noam.Truth be told I have been given an oasis to rest in and follow up on all that I have been behind on. Thierry, my host, has opened his home to me and I have enjoyed the family life of sharing a house with a father, a mother and a 10 month old toddler. We went to the beach together, we have been out for dinner...but mostly I have enjoyed home cooked meals and the comfort of being able to do whatever I wanted to; read, sleep, go for a walk etc... 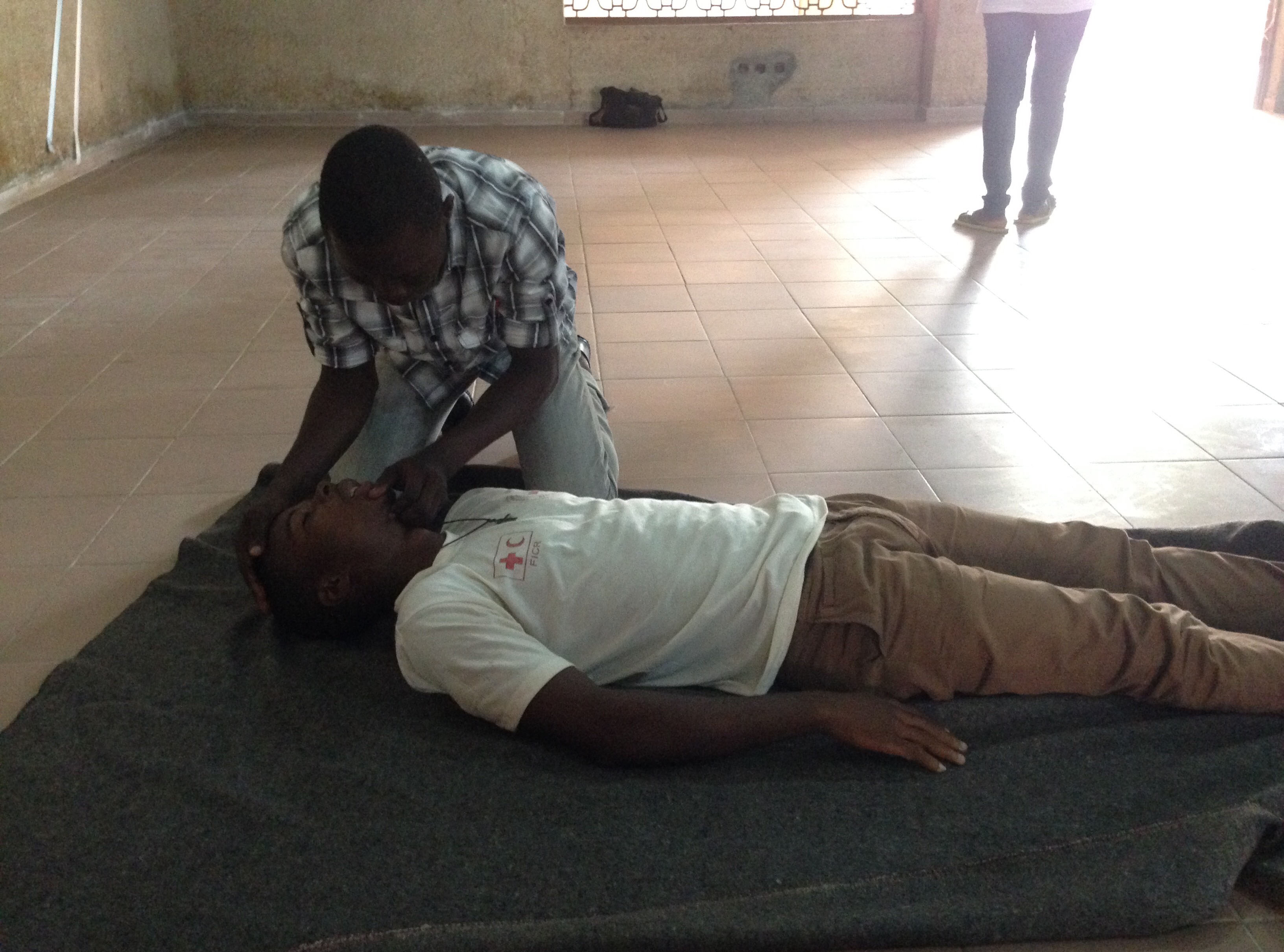 First aid demonstration.The Benin Red Cross has kept me somewhat busy. I have been invited to meet with 3 separate local branches on 3 different days of which 2 danced, sang and performed for me and the 3rd had a (in the beginning) serious meeting with me around a long table. I was pulled aside and told that I serve as a great inspiration for volunteers of the Red Cross. I am in a sense a volunteer myself, and by showing strength and dedication through this journey, I inspire those who stay at home and help in their local communities. Now that is a responsibility I do not take lightly. And it is yet a great honor. 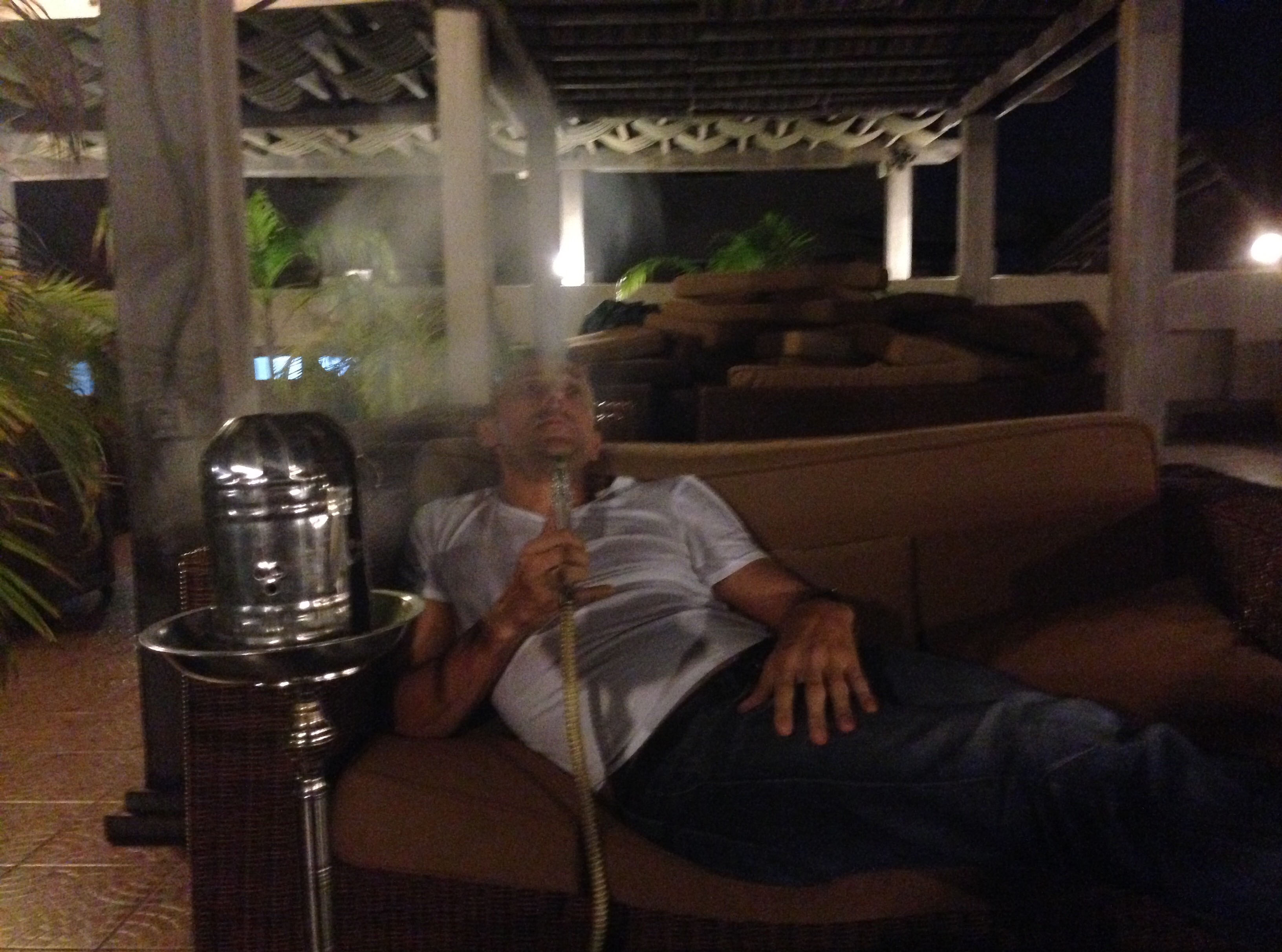 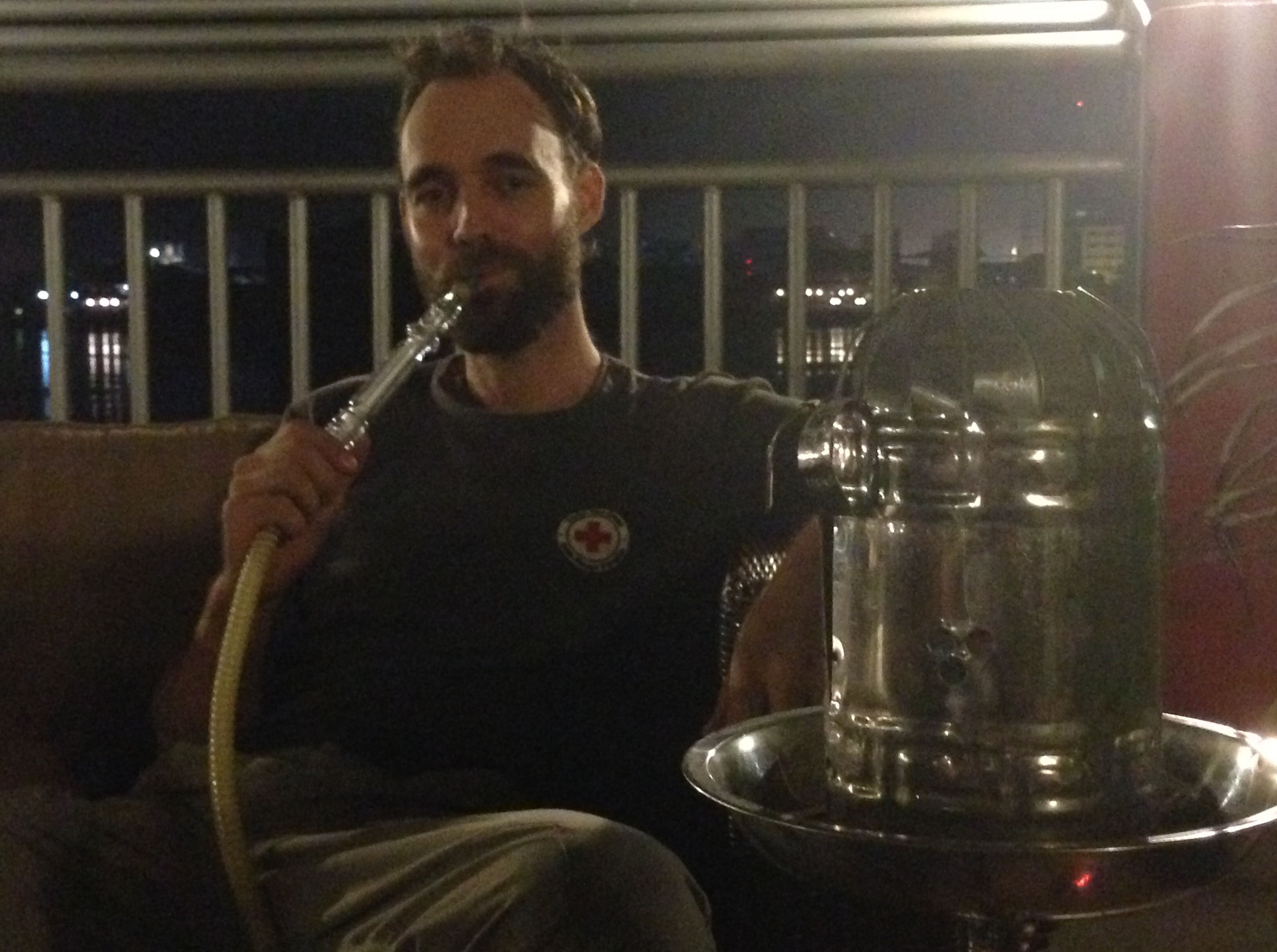 I have a weakness for shisha. There is plenty of it here because of a large population of Libanese. Thierry likes it too :)I've been reading about Benin and the its history and not too long ago (1975) it was known under a different name: Dahomey. I like looking back to the time before colonialism. But it does not seem to me that the regional history stretches far back in time in terms of known civilization. Many west African countries have history which dates back thousand of years. But not here. However hundreds of years will still form a strong line of traditions and customs and there is no doubt that you will have a great time in Benin. 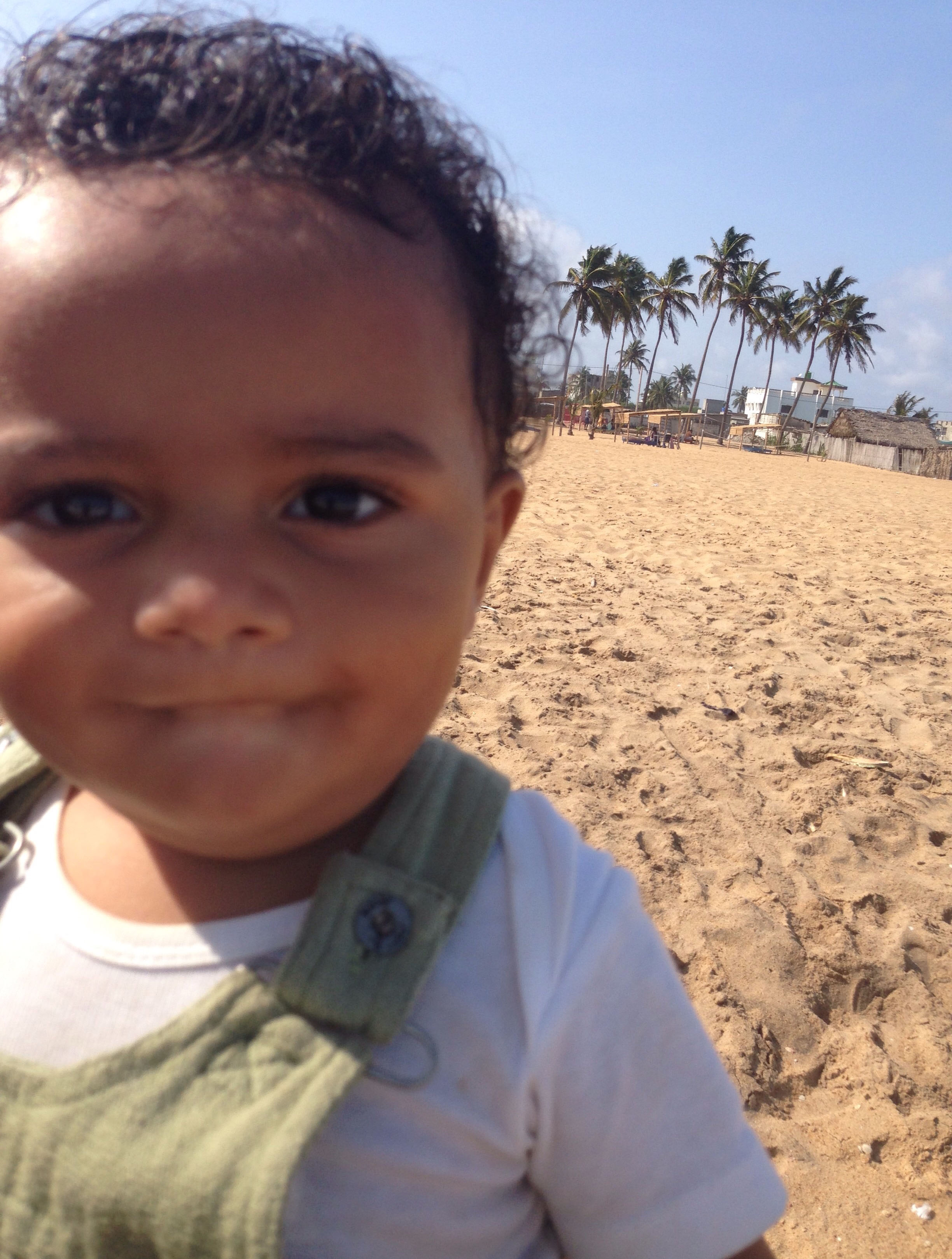 Noam at the beach. Part French, part Congolese, growing up in Benin - a good start to life!Once upon a time there was a strong and fierce empire known as the Oyo Empire. It was the most significant large scale military force in the region up to the 1700s. After this the Dahomey Empire slowly took over. This is where it gets interesting for me because they had a special, almost Spartan, way of bringing up their young ones to be fierce warriors. The Dahomey empire was a very strong military force and would raid villages outside of its empire and take thousands of prisoners of which some would become slaves. However local court protocol demanded that a certain percentage would be decapitated...so that was the faith for many as well. 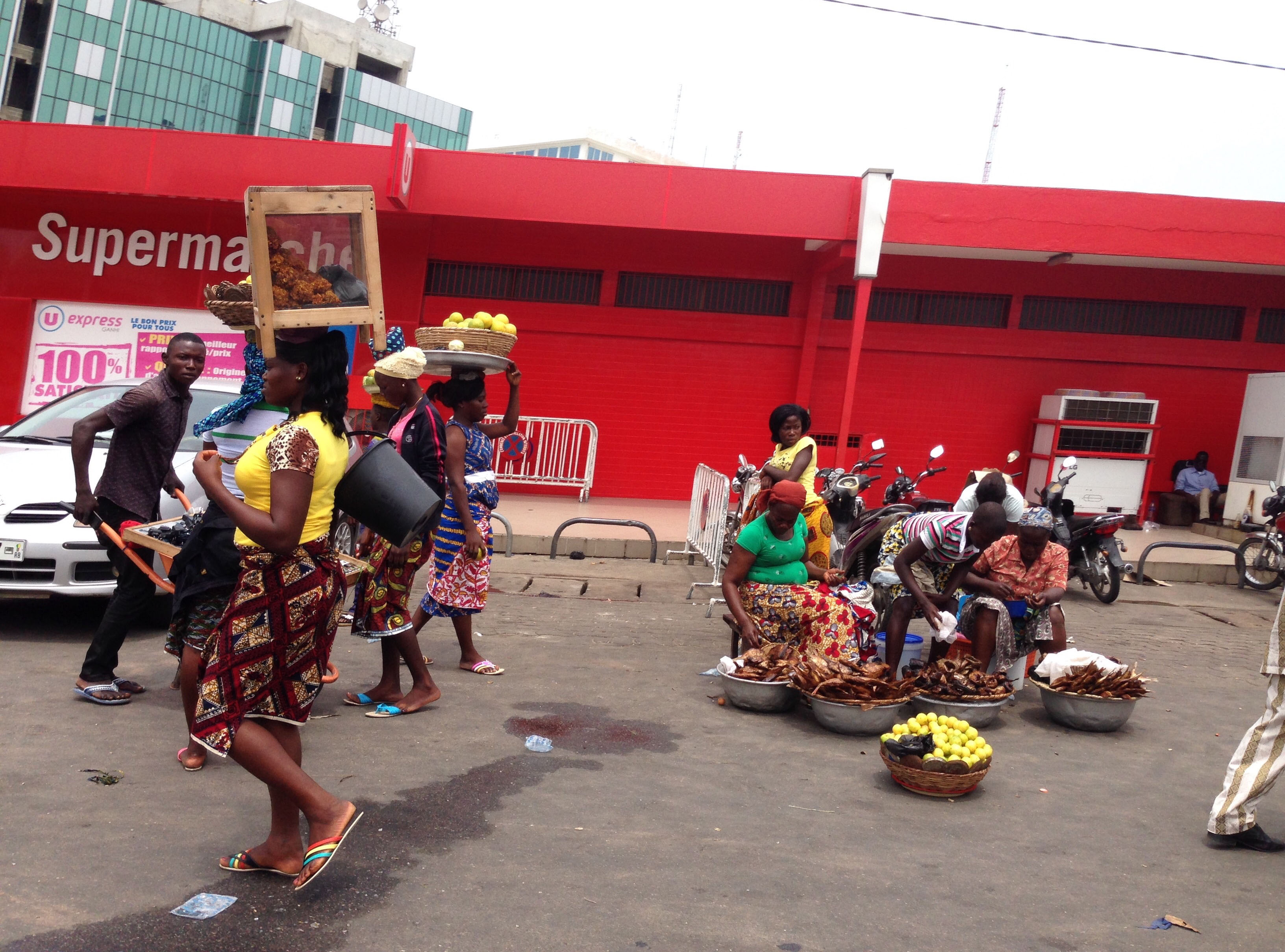 Decapitating people is silly. Then what would you carry stuff on?? ;)Slavery in Africa as such has been around for thousands of years and did not start with European colonialism. It is more myth than fact that European colonialists would raid the coast of Africa for slaves and disturb the peace and harmony of families holding hands and singing songs. In reality if Europeans actually tried to do that they would more than likely have been slaughtered by local tribes, empires and kingdoms. Having said that...outstanding sea fairing explorers like Vasco Da Gamma have caused their fair share of death, terror and destruction by bombing the coasts with cannonballs.

An old Norwegian ferry has found the shores of Benin. What will be its faith - a restaurant?But the slave practice, of which Benin has a huge historical share in, was more common than often a collaboration between locals and Europeans. The Dahomey empire became extraordinary wealthy by selling slaves to the Europeans. It is estimated that the king of Dahomey was earning around £250,000/year by selling Africans to Europeans. The number of people exported in the 1780s was around 102,000/decade. However the number would probably have been a lot higher had it not been for the court protocol of decapitating prisoners of war. "Here is your choice: Death or slavery?"That was long ago. Today Benin is a peaceful and loving place to be. Cotonou is not the capital. Porto-Novo is. But Cotonou is by far the largest city and a more "happening" place. I love it here. People are so friendly. Well, people are generally friendly everywhere in various ways...but I have been here longer than other places so Benin has had the chance to step deeper into my heart. 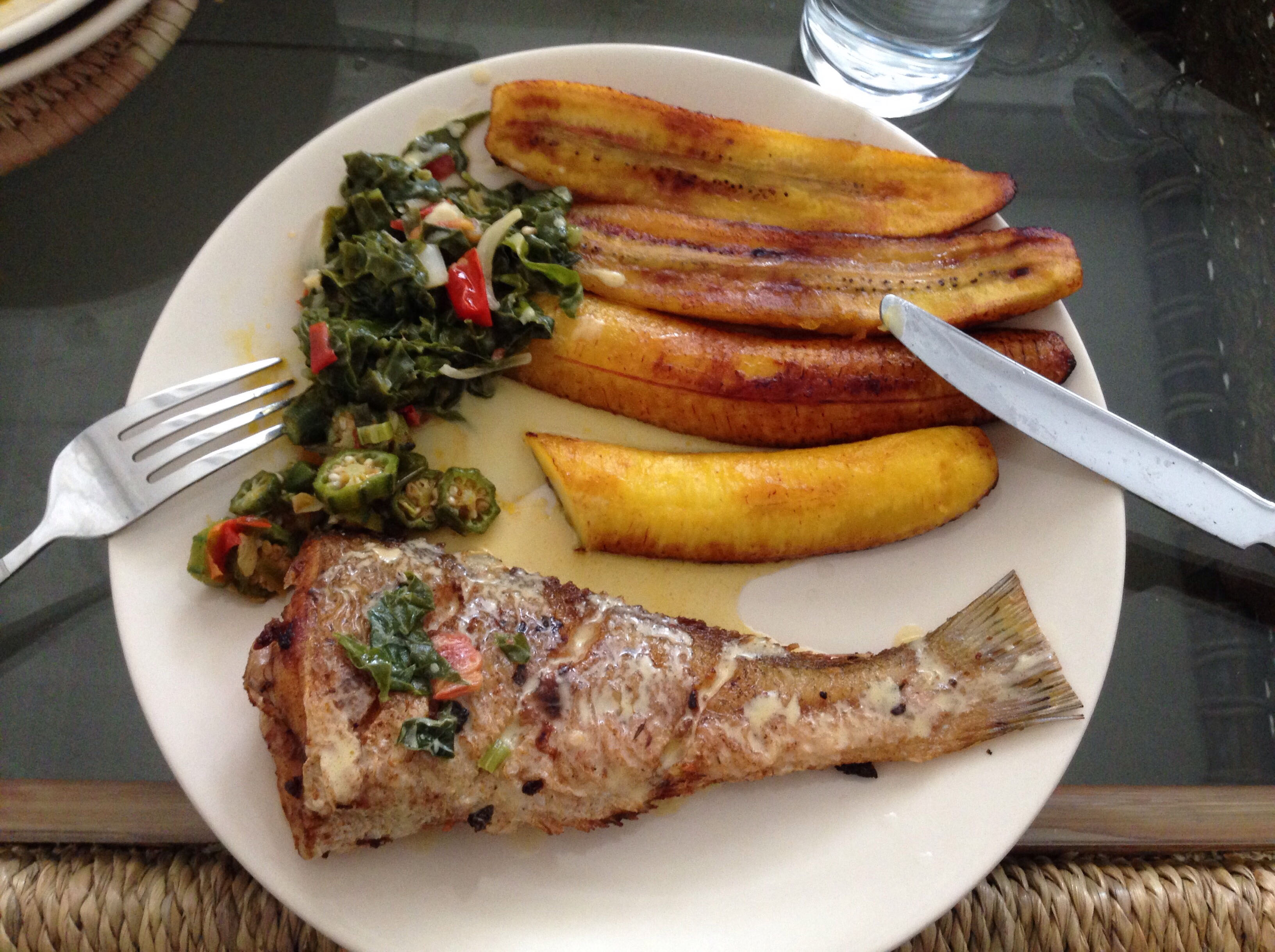 I joke a lot with the locals and they make me laugh and I make them laugh. I speak less than a hat full of French words. But somehow we always make it work so that we understand each other and it is often a lot of fun :)"Moto-taxis" are by far the cheapest and fastest way to get around. It's quite organized in Benin and drivers must wear helmet and a yellow shirt with their license number written upon it. The ride itself however is somewhat chaotic at times with a different standard of respect for the rules. But I tell myself that "he is a professional". After all...he's wearing a helmet and is licensed?! ;) 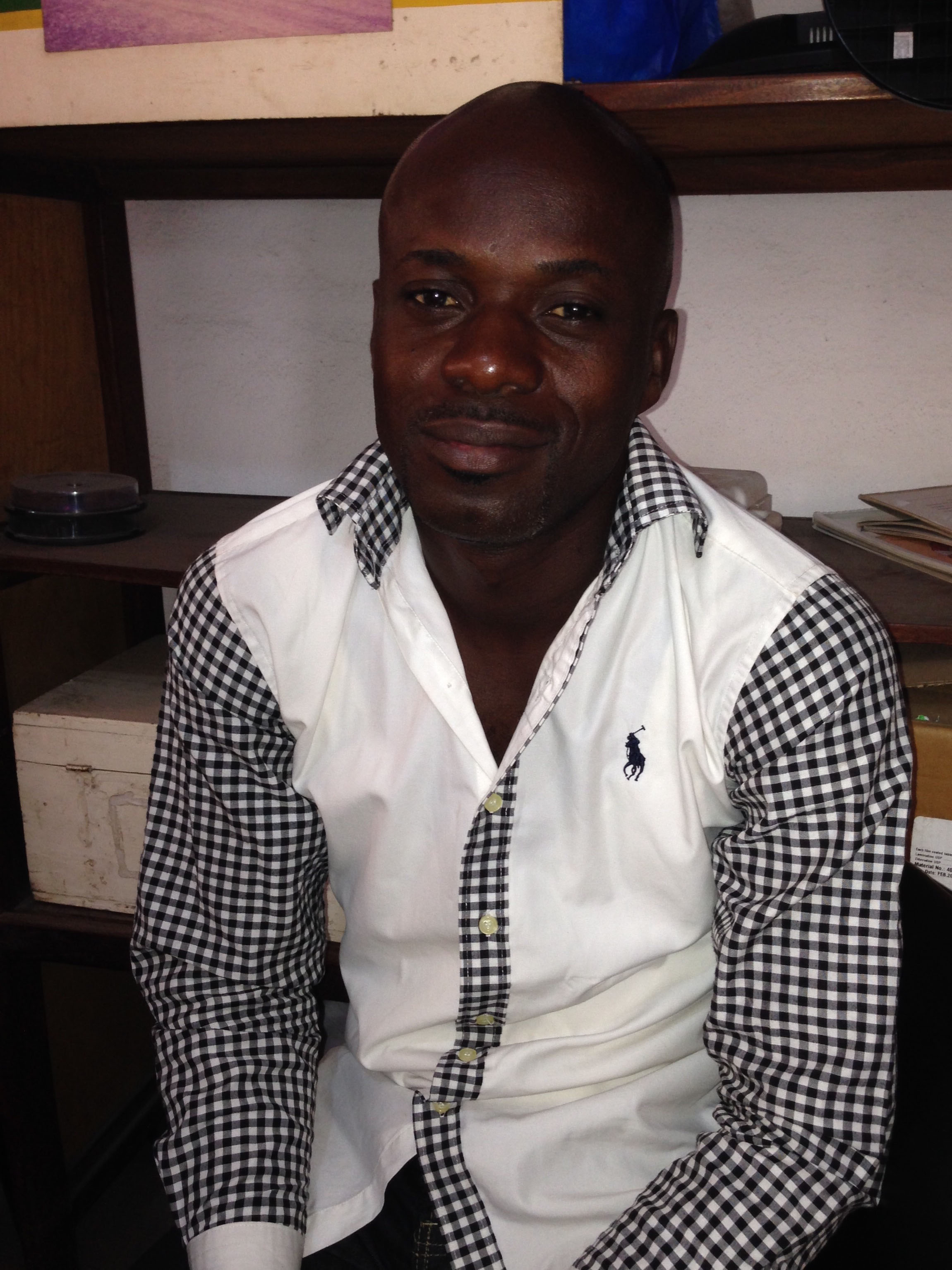 Apollinaire Affantodji.Today I met Apollinaire Affantodji who is local to Benin but speaks 9 languages. Well done I say!! But honestly it's not all that uncommon for people around this part of the world to know many languages. In Apollinaires case he married a woman from Togo who comes from a different tribe so she speaks another language. So in his house the mix languages a lot and on a daily basis they speak 4: Mina, Fon, Watchi and French. Imagine growing up in that house!! :) 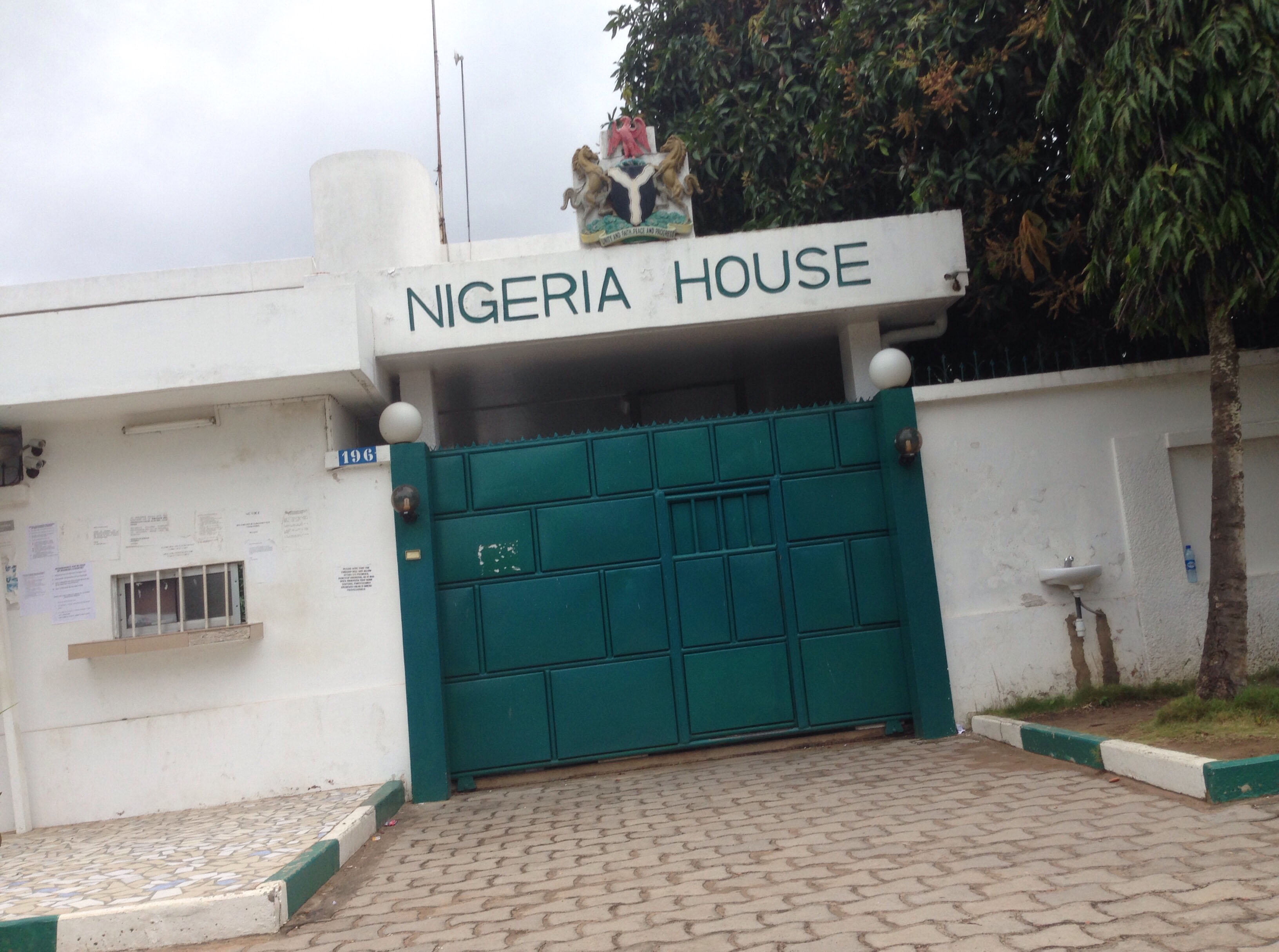 The Nigerian embassy handed me my visa the same day I walked through the door. Procedures demand that they do not issue visas to non residents and being a resident of Denmark I was out of luck. But I stayed polite, calm and positive so they said they would think about it and asked me to come back later. 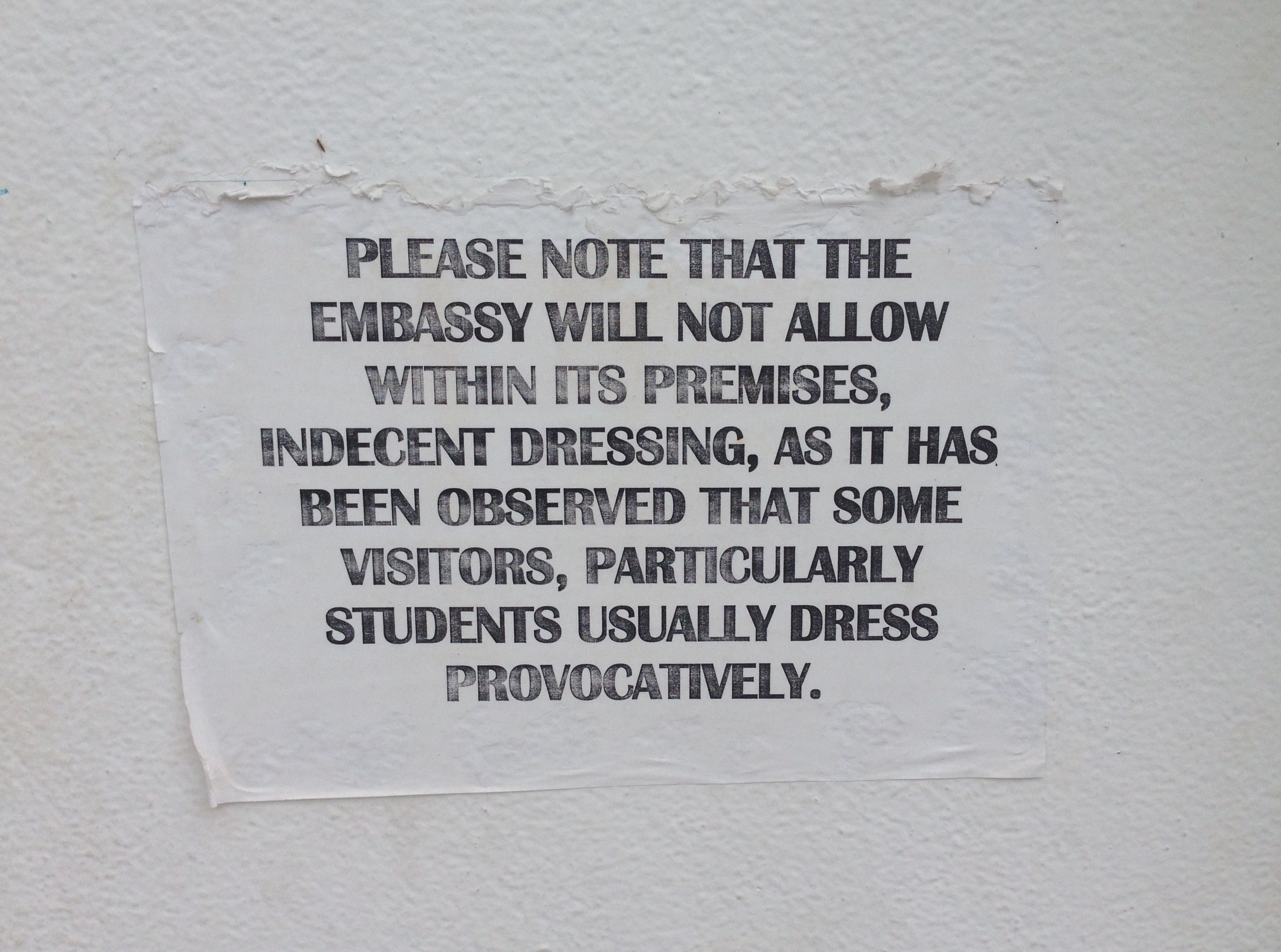 Around noon I had another meeting with Isidris in the embassy. He's been at the embassy for some 30-40 years and has seen a thing or two. He dismissed a man from Benin and told him to fly home in order to get his visa. He also dismissed two girls (possibly French/Polish/Indian?) and told them to come back late in the afternoon. Then he looked me in the eyes and asked if he could get me a cup of coffee or something else! I'm not sure why I was treated so well but I think I might have something to do with the experience I have gained during the past 20 months. I don't get upset or impatient in front of people like Isidris...because what's the point? Isidris is the "king" in his "empire" and it makes no difference to him if you get to go to Nigeria or not. So if he feels that someone is rude then that might just be enough excuse to send them away. He just wants his job to be easy and what can be more easy than polite, smiling people? 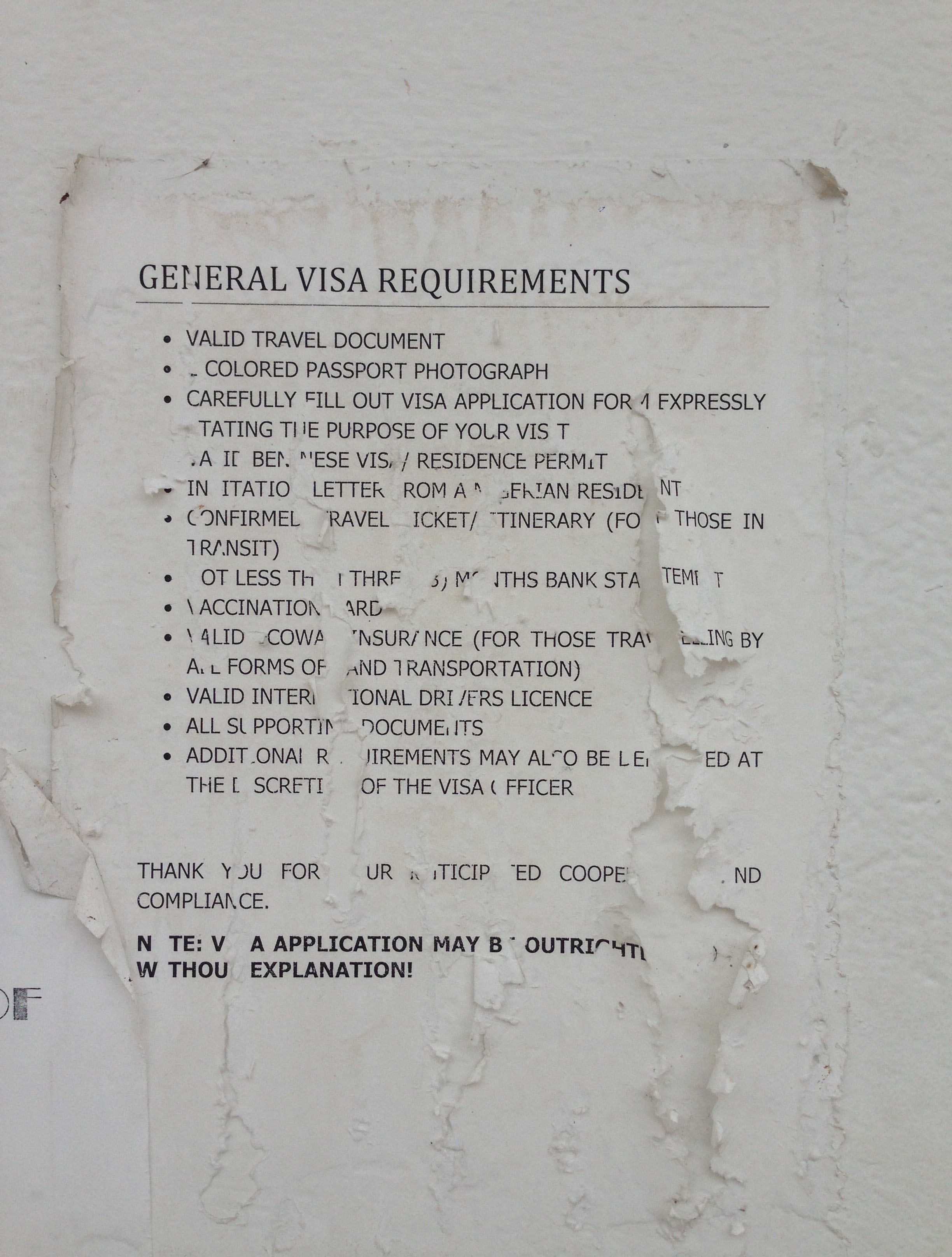 I've also started working out...it is small stuff. 15 minutes here and 30 minutes there. But it will eventually be a part of strengthening my body. I'm more or less back after the malaria I had I Ghana. My hands continue to shake at times and they didn't before the malaria. So I contribute that to the sickness. 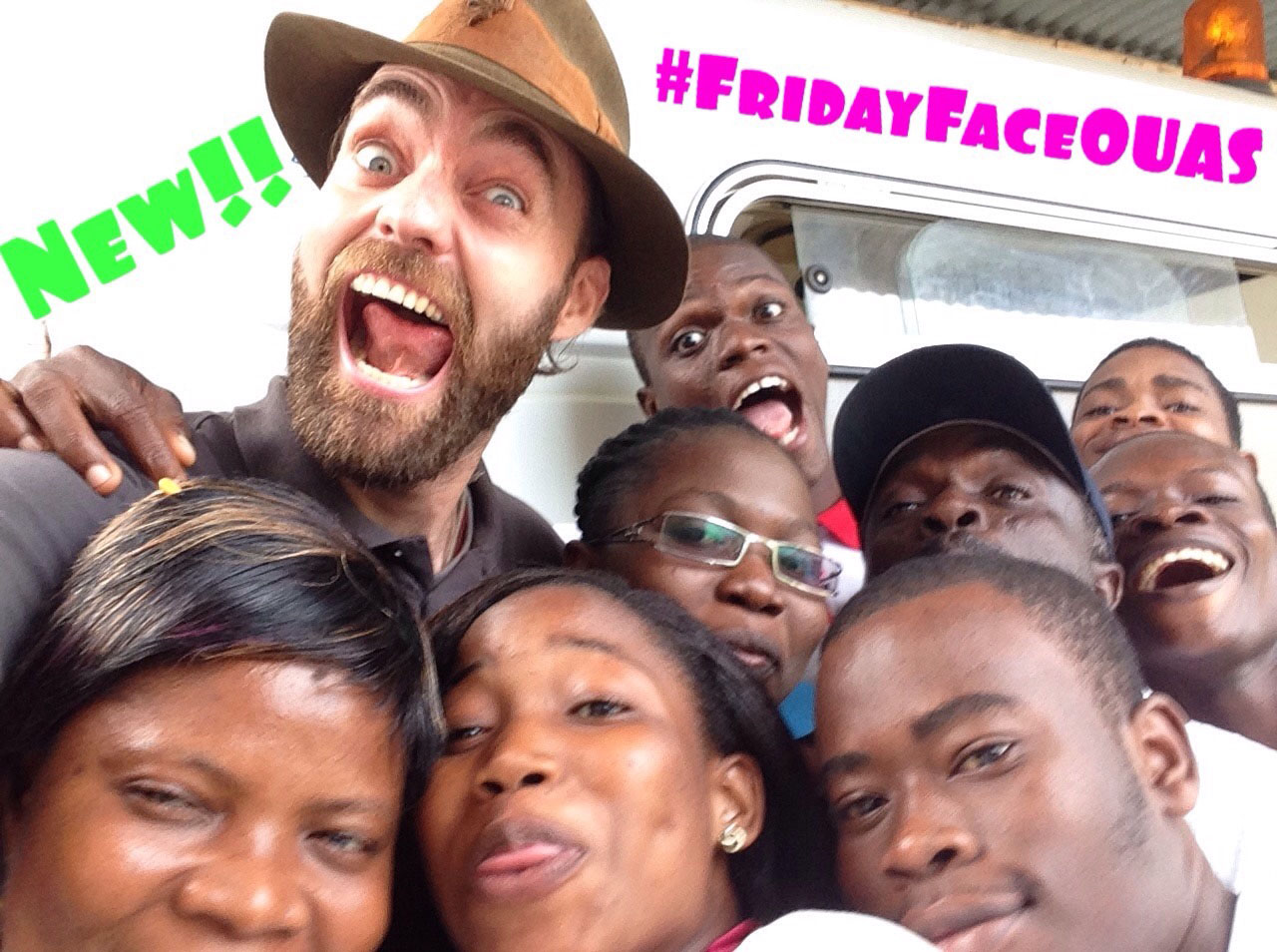 #FridayFaceOUAS is a new recurring event which will feature every Friday.On Sunday I will cross the border to Nigeria. Now THAT will be a great adventure!! :)Best regardsTorbjørn C. Pedersen (Thor) - only slightly mad :)Once Upon A Saga