Why would you travel to every country in the world without flying?

Hi there,I left Denmark, which is my home country, on October 10th 2013 with the goal of returning home again, once I had spent more than 24 hours in every country in the world. To make it unique and adventurous the aim was to do it completely without flying. I'm not sure that I was driven by much more than the adventure when I left home. I was certainly fond of the famous quote delivered by mountaineer George Mallory, when asked why he wanted to summit Mount Everest? His reply was slightly annoyed but legendary: "BECAUSE IT'S THERE!!"Today I am much more clear about what the purpose of this journey is. But the purpose is actually several things combined. Here we go:

To do what no one has ever done beforeNot many people have actually reached every country in the world in their lifetime. Far less people have done so than people who have summited Mount Everest. I find that to be an interesting thought. Interestingly nobody has ever traveled to every country in the world completely without flying. Some adventurous souls have however come pretty close. Doing something new is exciting and it turns out that it serves as a source of inspiration and motivation for many. But the inspiration is not always what seems most likely. Some are naturally inspired to visit new countries and far away cultures. But some are inspired to finish an education, to marry a loved one, to do the dishes, to take a chance... It fascinates me and makes me wonder where inspiration really comes from. If I'm unable to complete this journey - then someday someone will. 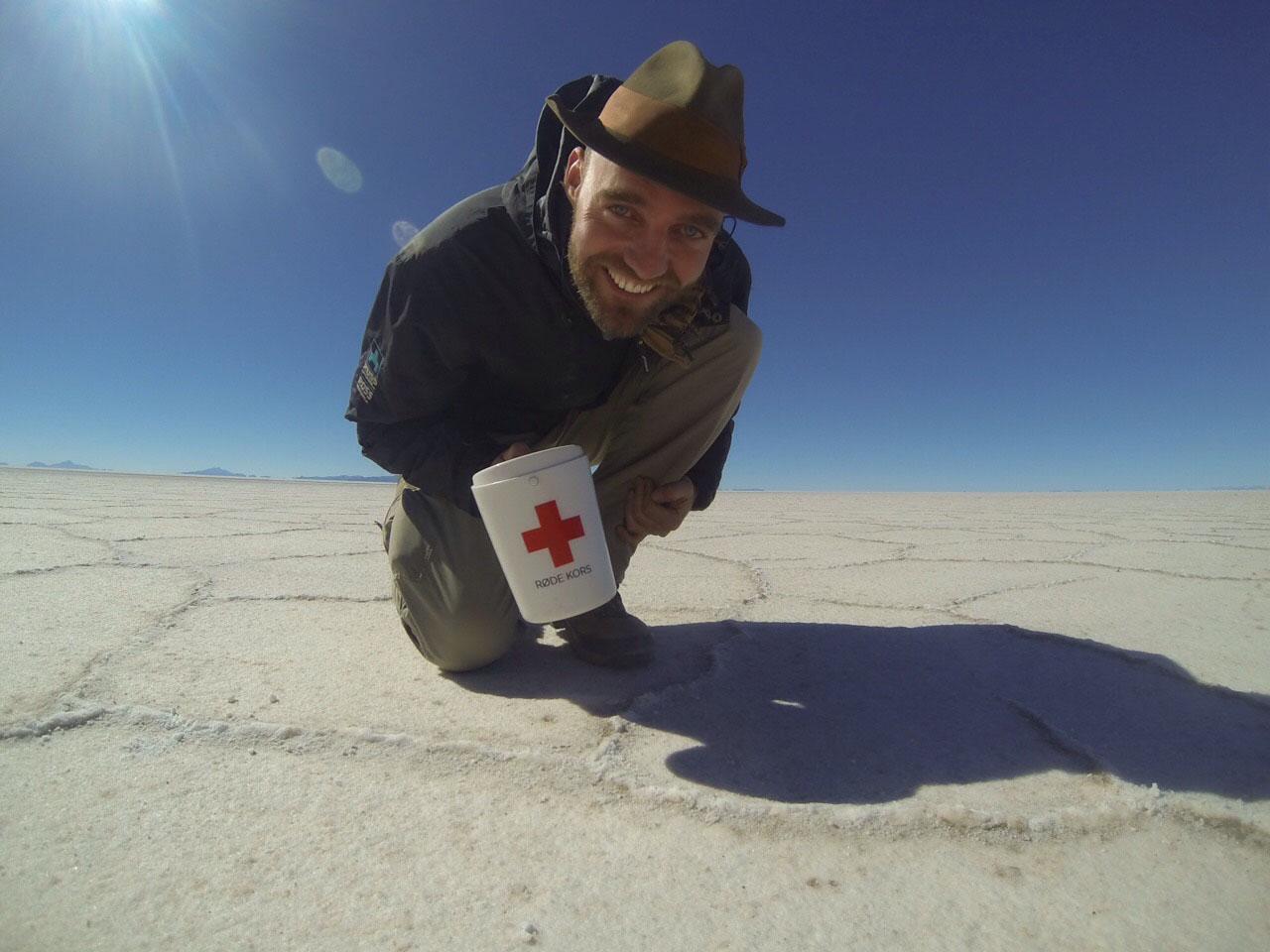 The Red Cross and Red CrescentI have been given the honor of traveling as goodwill ambassador for the Danish Red Cross. As such I get to represent and promote the Red Cross in 192 countries in the world. That means that the Red Cross is basically in every country in the world. Like most people, I knew very little about the movement when I left home. But from interviewing and listening to volunteers all over the world I have been amazed. I am on my knees for the millions of volunteers that make a difference in the lives of further more millions of people every day. And most people have no clue what the Red Cross does. It seems that people only learn about it when they need it. It is an adventure within it self to learn about this old organization which was founded in 1863. And it is certainly an honor to promote it publicly. 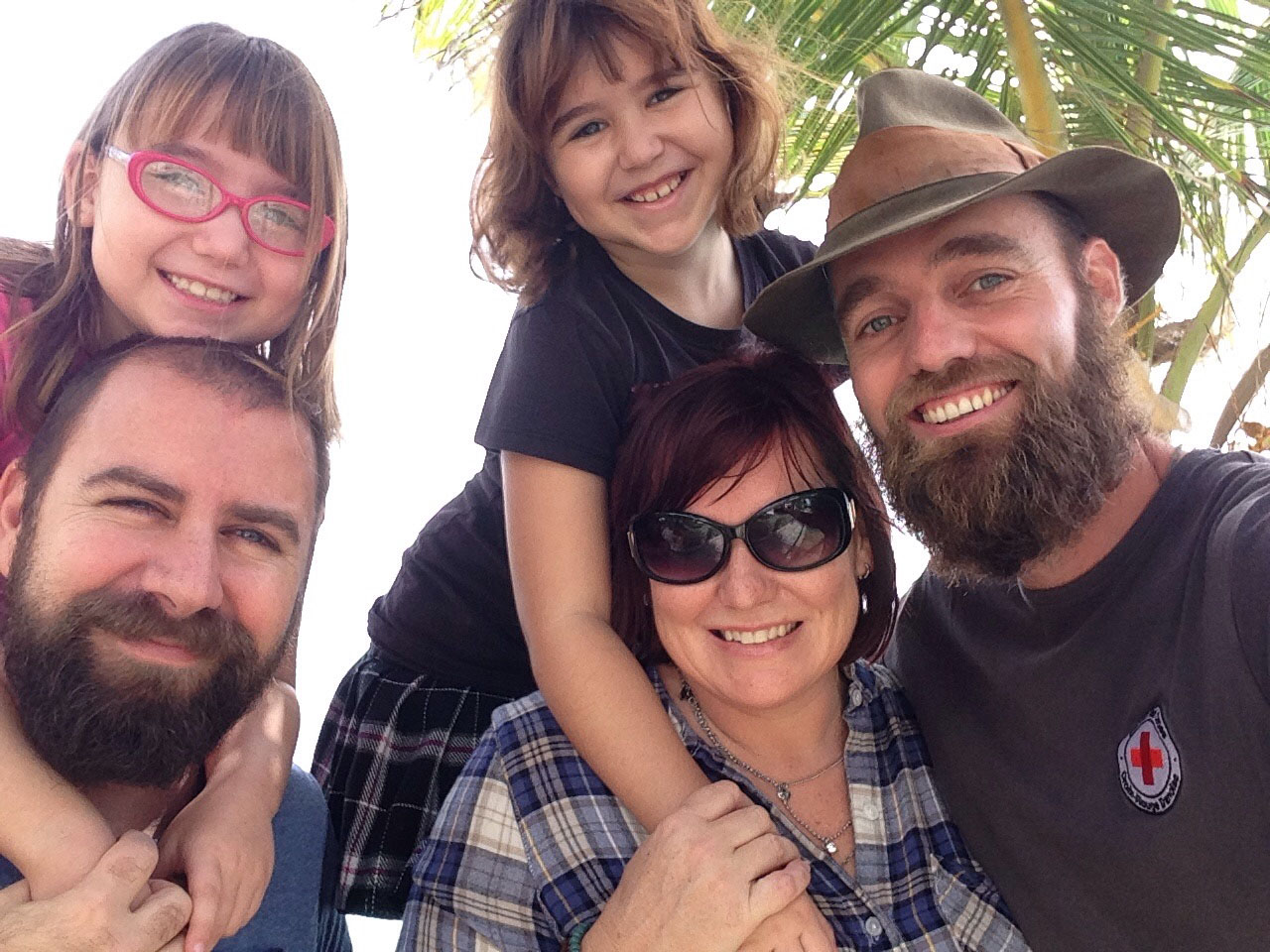 The world is not what most of us believeIn the beginning of this journey I thought that I had embarked on a "country project". But I quickly learned that I was on a "people project". After all, what are the countries worth without people? The mainstream media is showing us the sensational part of the world. Basically all which is newsworthy. As such we often end up hearing a lot about terror, corruption, conflicts, natural disasters, decease, extremists...the front page is full of terrifying stories. And if that is our world then who would like to visit? 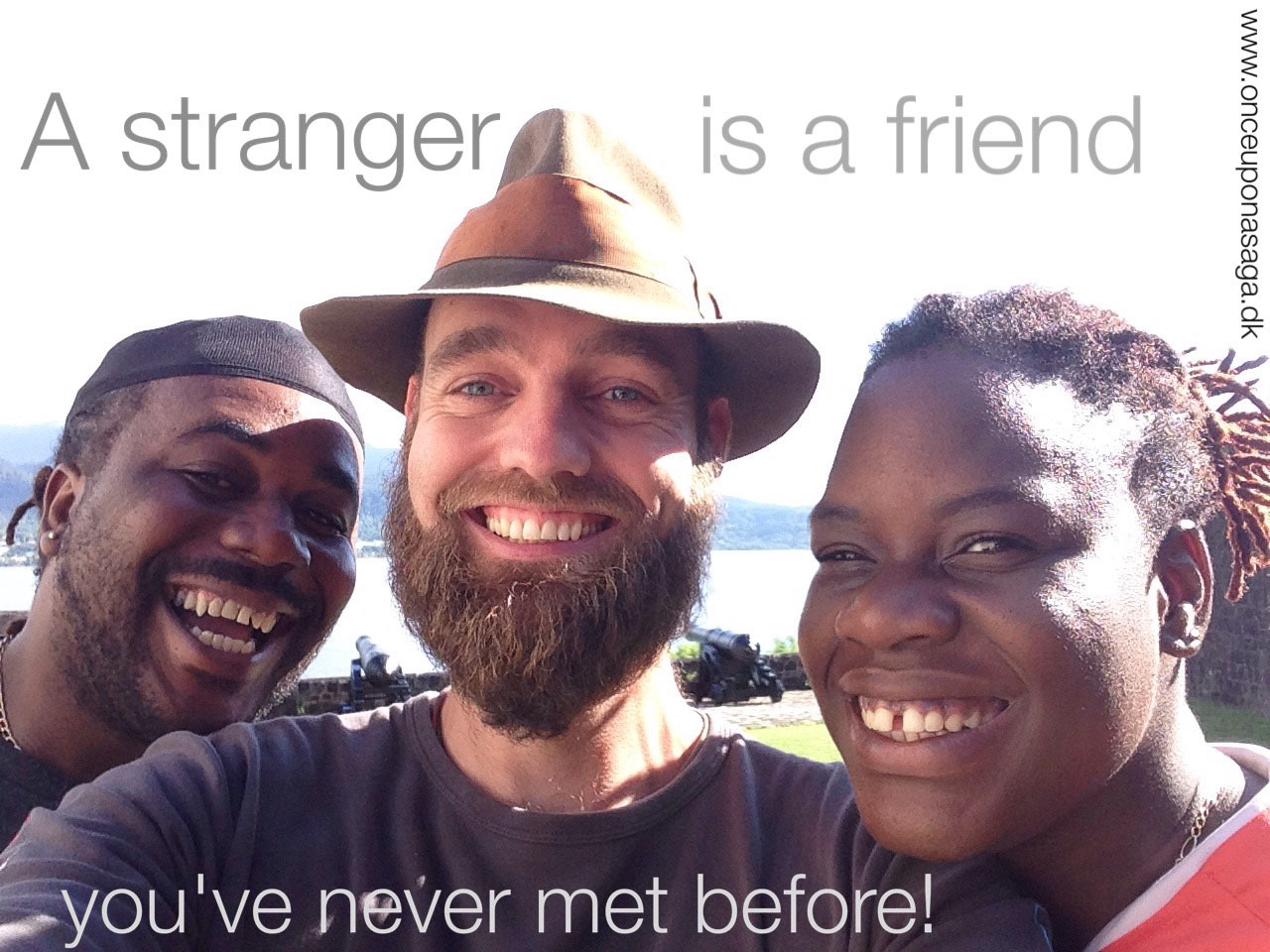 Fortunately I have so far found, that while the world isn't perfect and has much work in store for us, most of everyone we share this planet with are good well meaning people with good intentions. Politics and religion is important to some people. But often I find that these five things are far more important: Family, food, music, sports and talking about the weather. I find that most people just want to carve out a small part of the world for themselves. They ask for little more than to get by in life and to see their loved ones prosper. Is it newsworthy? Apparently not really. But it certainly represents the vast majority of everyone on this planet - and probably you too. 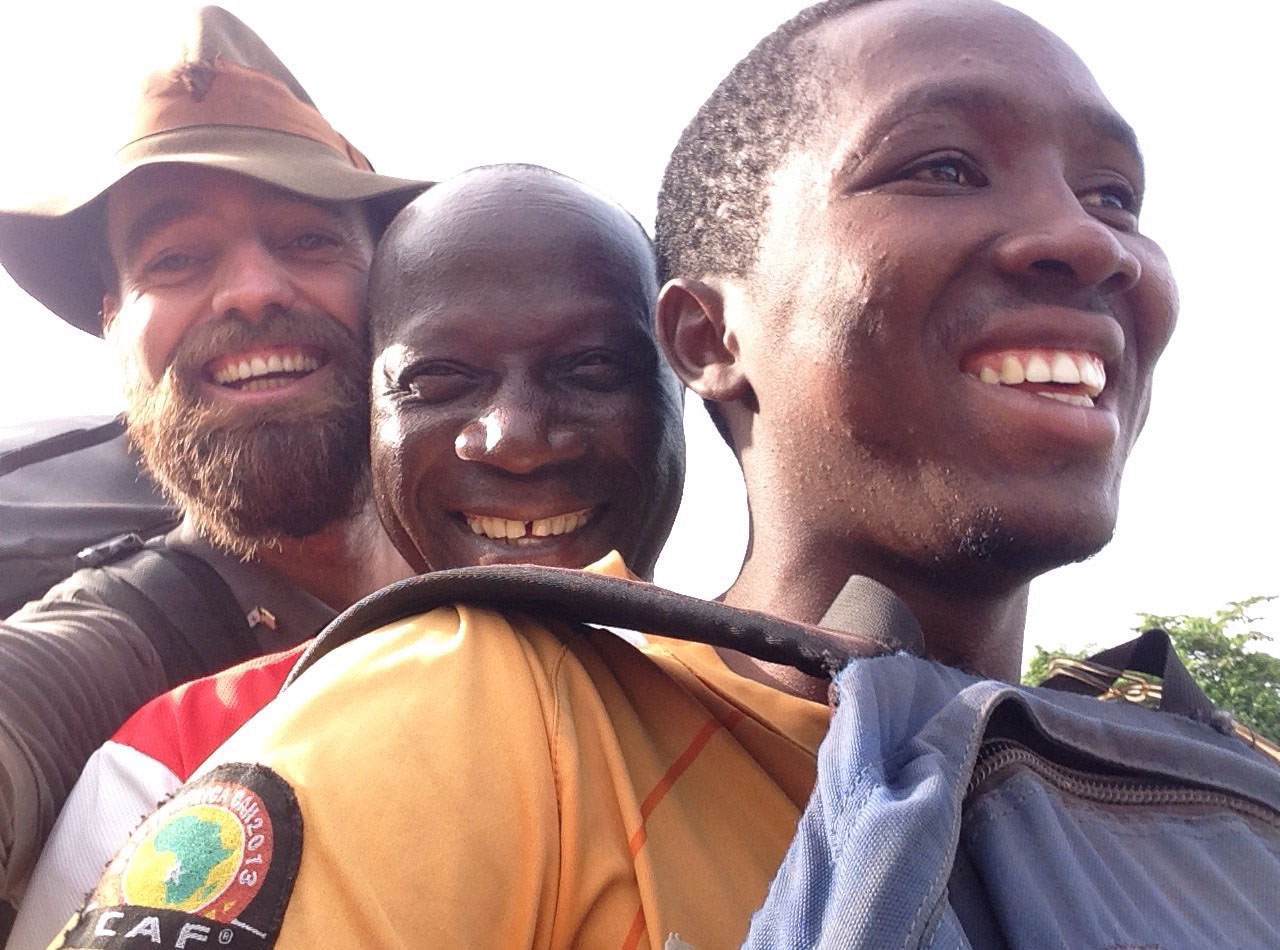 What do you think the world would be like if journalist were obligated to balance out their reports and offer a more informed worldview? If they couldn't just report that the world was suffering from the biggest Ebola outbreak it had ever seen. But had to inform that the only three contaminated countries (of 54 in Africa) combined have a population of more than 20 million people, and that in a period of 18 months less than 12,000 people died, compared to victims of traffic accidents or malaria cases in the same period? Or how about if a journalist were obligated to inform that a country like Sierra Leone, while battling Ebola, is rich in traditions, culture and history which has developed during more than 2,500 years? Would we then think more about people as people? Or would the world still be too complex and too far away?It is my absolute greatest honor to be able to give every country I visit some form of representation in a positive way. Every country in the world has the right to be viewed as the potentially best country in the world. If you want the negative stuff then there is plenty to be found. We should never ignore the darker side of life. This part of the Saga is however about balancing out the information by shining some light on the everyday people, of which there are most.

Traveling on a low budgetI am traveling the world on a $20/day budget. It covers meals, transport, accommodation and visas. It's possible because a lot of the world is pretty cheap to live in if you buy local food and travel like the locals. And often I get to sleep somewhere for free. Occasionally in a home which belongs to someone I have just met. I do not need to buy a visa everyday so the costs of that is brought down over time. Public transportation is often very cheap and certainly affordable most places. But it does at times feel like torture to continue on a low budget. Sometimes I want a good bed, more luxury and a big fat steak.I am however sticking to the budget because according to most people their dreams are held back by the lack of time or the lack of money. Sometimes both. You've got to make your own time - but this project will show you that you need not be a millionaire to travel, cross borders, discover cultures and make new friends. It is however also true that $20/day is a fortune for some people. It's relative. Some smoke cigarettes for more than that.

As you can understand this project stretches over a lot which makes it harder to understand. Besides every country in the world becomes too much for many to understand. Including me. If I had launched a project in which I was going to every country in Africa then it would still be a lot of countries. But it would be easier to comprehend. I see it in the same way as wining the lottery. If you win $1 million then you kind of understand that you can pay off your debt, buy a boat, a house and a car - or even stop working for a number of years. But if you won $1 billion you wouldn't have the faintest idea what you could do? Could you buy a country? Would you ever need to work again? Would your children ever need to work? It becomes too abstract. Sort of like: "Every country in the world without flying".

I'm still curious, the world is pretty amazing and there is much to learn. I get tired at times and a little fed up. But I've come this far and I'm not one to quit. Besides, "A stranger is a friend you've never met before". Who might I meet tomorrow? And what about you? ;)