As I began in last week's entry: I definitely love Lebanon...NOW GET ME OUT OF HERE!! My patience is running really thin. I only have one way home and that is through every country in the world. 60 more to go. 50 days in Lebanon is well above average however it’s still no record for a single country within the Saga...waiting 48 days for a visa is.

When life gives you lemons then make lemonade. I’m really trying to get the best out of the situation. I don’t have many alternatives to waiting for the visa. I have been to every country west of here. Lebanon only borders Syria and Israel. If I go to Israel now then I will be closed off from visiting most of the Middle East due to politics. I cannot go to Syria without a visa and Syria’s capital is tauntingly close. Reaching Damascus from Beirut is just a three hour drive. It suddenly reminds me of staring across the the Congo river two years ago. I was in Brazzaville and wanted to cross the three kilometer (1.86 mi) wide river which separates the two Congo’s. That ended up taking about 50 days. Now I suddenly also remember the pyramids of Giza: “man fears time, time fears the pyramids”. I want to go home... There is no quitting of course so how did I pass time between last Friday and now? Quite well I should say! Philip is a young Danish, dane from Denmark! Another Viking who likes to travel. He has already clocked up somewhere between 75-85 countries. I really like when people don’t know how many countries they’ve been to. If you don’t know then you’re not counting and that’s what travel is ultimately about. Philip has been touring the Middle East and contacted me as he was making his way to Lebanon for a few days. As fellow Vikings we obviously met up and had a good time. More about that later on. 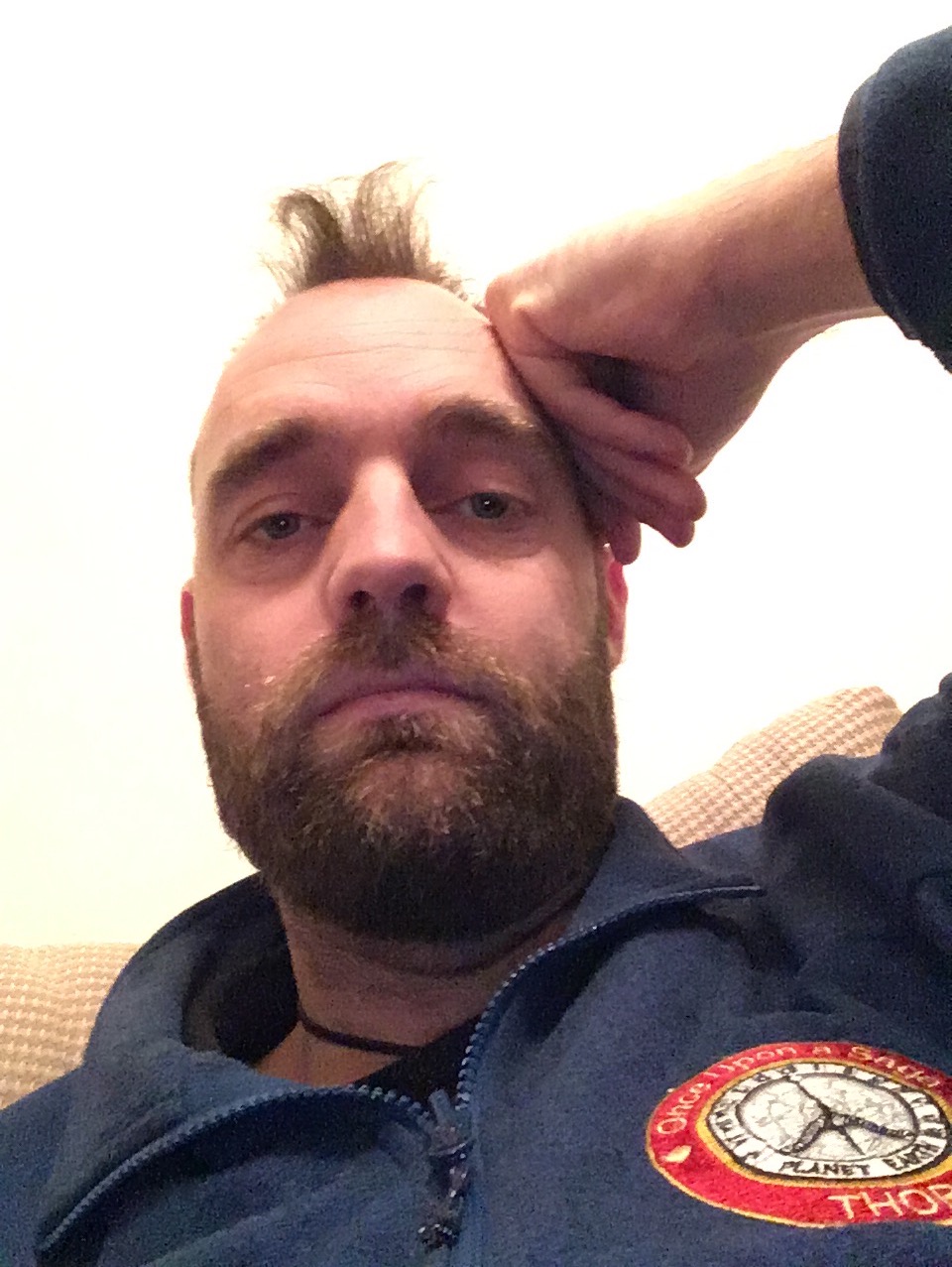 Sometimes I get REALLY fed up with it all...

Can you believe we still haven’t received the money from the crowdfunding campaign at Indiegogo? They wanted us to fill out a W-8 or W-9 tax form and the issue we got hold of was incredibly complicated. I didn’t know what to make out of the abbreviations in the form? Indiegogo’s customer service is called “Indiegogo Customer Happiness”? Indiegogo is taking a cut of the money you have donated. However they couldn’t fill out the US American tax form even after having all the Saga's details (address, bank account etc). And they couldn’t guide us in any way. I found that to be pretty far off from what I expect from an international crowdfunding platform. Then at some point I couldn’t reach them at all! I sent six reminders before I finally got an answer stating that there was nothing they could do to help?! Think about it for a second. Indiegogo profiles an easy click platform and promises the money on your account within 15 days of an ended campaign. However suddenly you need to fill in some technical tax forms for them to release the money. Why would I as a dane be filling in tax forms from the USA? There is no information about this in their FAQ page. Where is the money until it’s released? It must be in their bank account where they earn an interest rate on top of their cut. How many clients does Indiegogo have annually? This has obviously taken a lot more effort on our part than anticipated but I’m happy to say that several people chipped in over the past few days. Friends and friends of friends have been messaging me and we worked out how to deal with the paperwork and bureaucracy. As of two nights ago I received an email from Indiegogo Customer Happiness stating that the money would now be on its way. Fingers crossed. 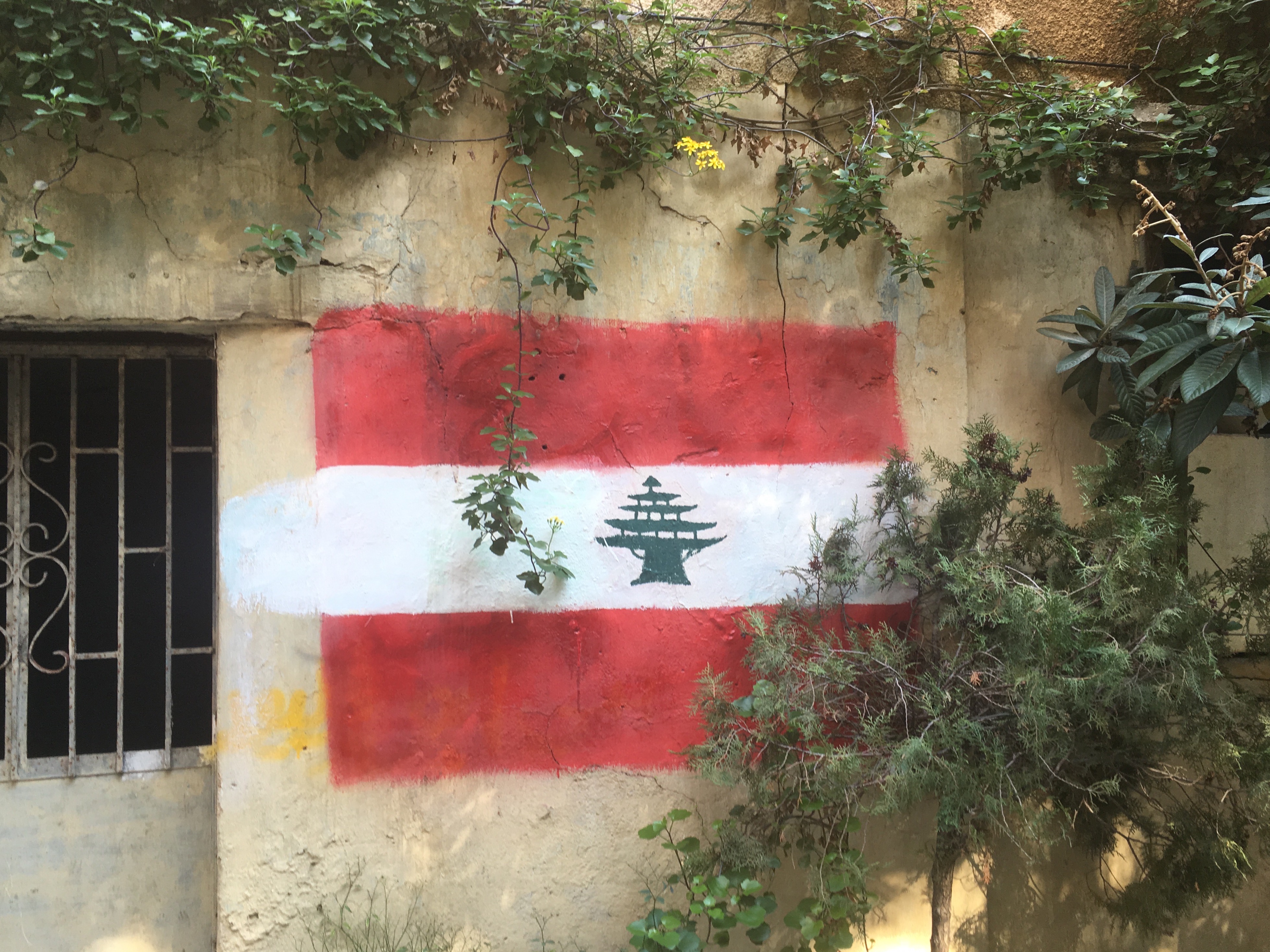 The Lebanese flag shares it's red and white colors with the Danish flag. Furthermore it has a cedar tree in the middle. My middle name is "Cedarleaf".

There is consensus for the idea that Syria’s tourism ministry would be excited in having me visit. Syria doesn’t get much positive attention in the media in spite of how much culture and history it has to offer. Damascus is regularly listed as one of the world's oldest continuously inhabited cities. People have lived in Damascus for more than 10,000 years and that’s just scraping the surface. I’m still in Lebanon so my focus on positive promotion is still here. I’m really looking forward to telling you more about Syria when I finally go. I mention all of this to say that I’ve been trying to work out how to get in touch with Syria’s tourism ministry? I’ve emailed their webpage, tweeted to a few accounts and contacted their Instagram account. Also I’ve been looking around my network to find out who knows who. Nobody wants to move forward more than me! However for now we are waiting and before you ask I might as well say: no, there is no other country we can easily go to in the meantime.

George and Rabih both work for Safmarine (www.safmarine.com) which is an independently operated shipping company in the Maersk group (www.maersk.com). We met when I made my presentation at Maersk’s office a while ago. I first saw Lebanon’s snow when I arrived to Beirut on November 11th. It was a clear day and the mountain tops behind Beirut were white. As you may remember, immigration didn’t allow me to enter Lebanon that day and I ended up in Egypt instead. That doesn’t matter now. What matters is that I saw the snow and now, 12 weeks later, it’s finally time to ski!! George and Rabih have been skiing for 15-20 years. They absolutely love it and invited me to join. The weather was perfect!! A deep blue sky above the virgin white snow. 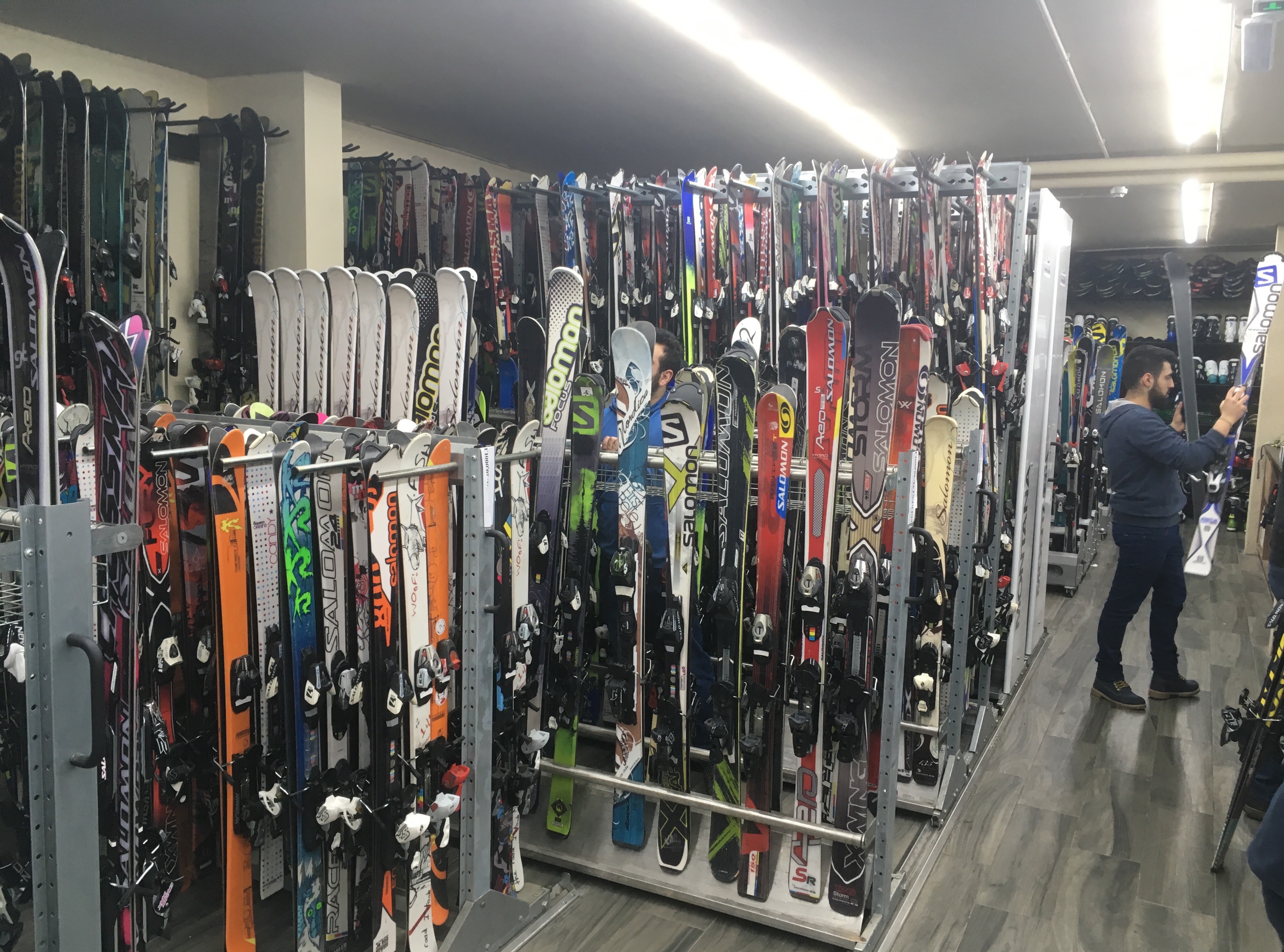 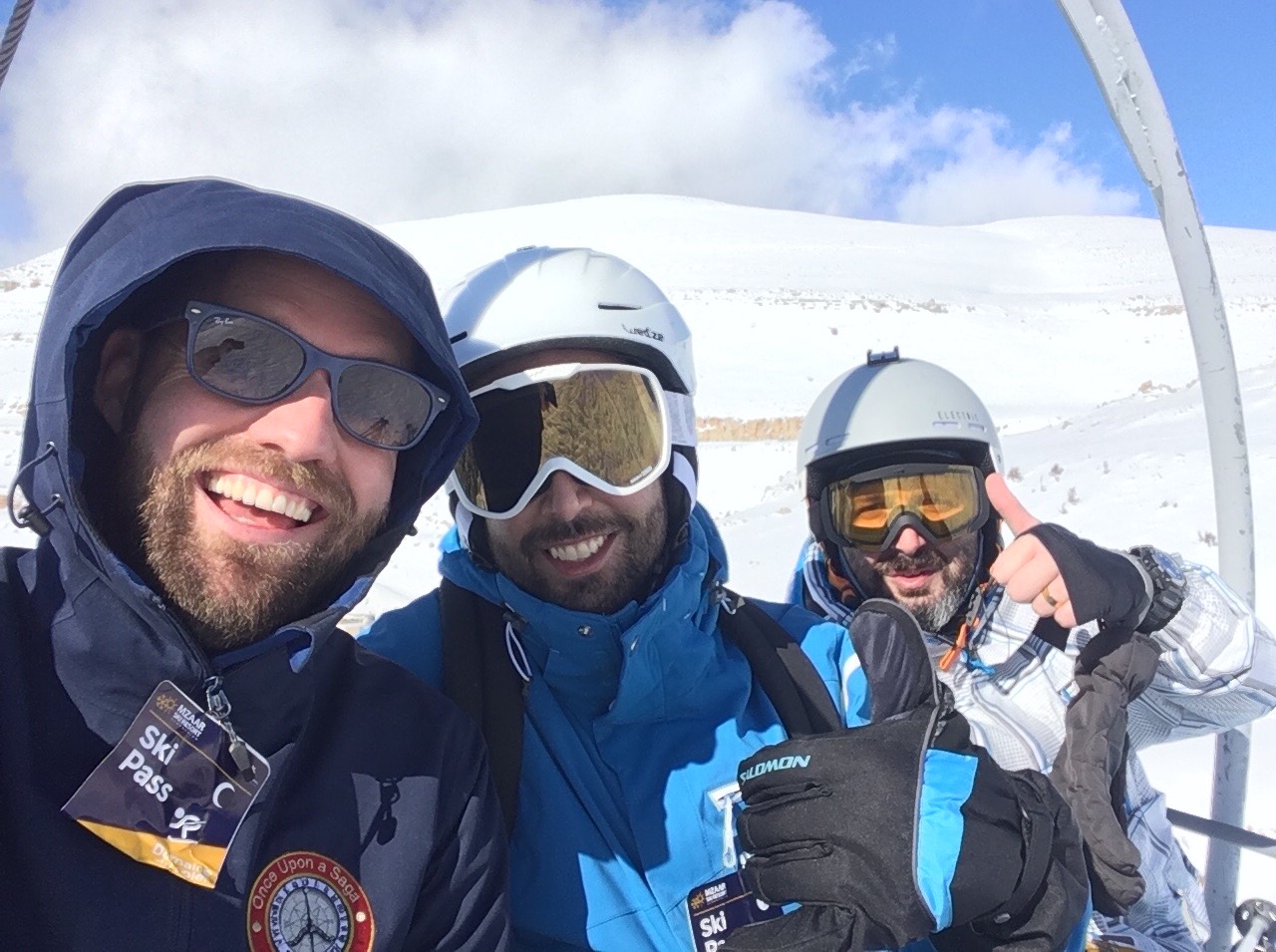 Rabih in the middle and George on the right. Let's make them FAMOUS! ;) 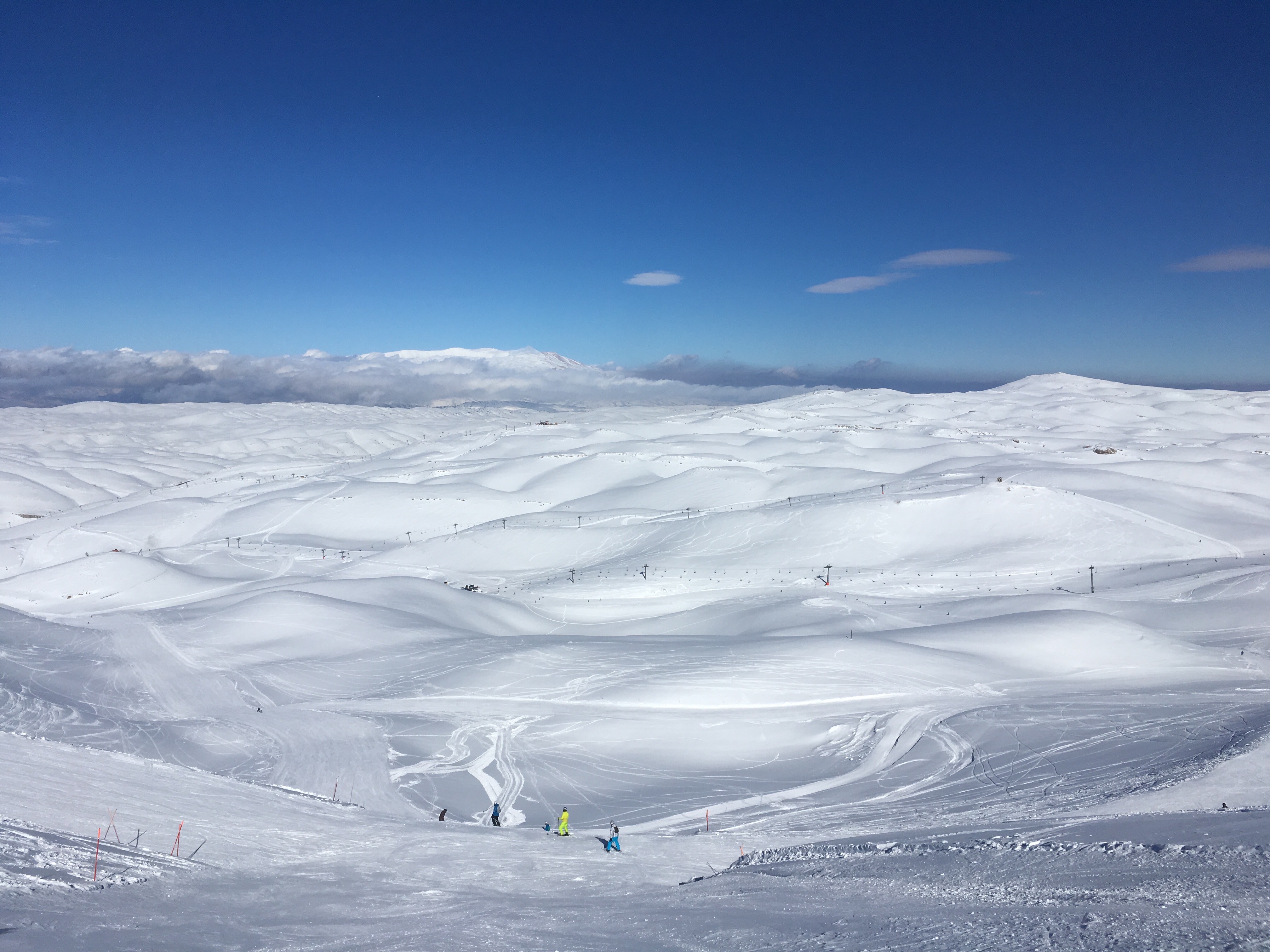 We went skiing at Mzaar-Kfardebian, which boast more than 60 km (50 mi) of slopes. That makes it the biggest ski resort in Lebanon (and the Middle East). Obviously I blew my budget but it was definitely worth it!! Skis, gloves, boots and a pass ran me around $50 for a full day. Now I need to be careful what I write because my fiancée was here in Lebanon over New Year. So let’s say: her visit excluded, that day on the slopes was the best day I’ve had in Lebanon so far!! 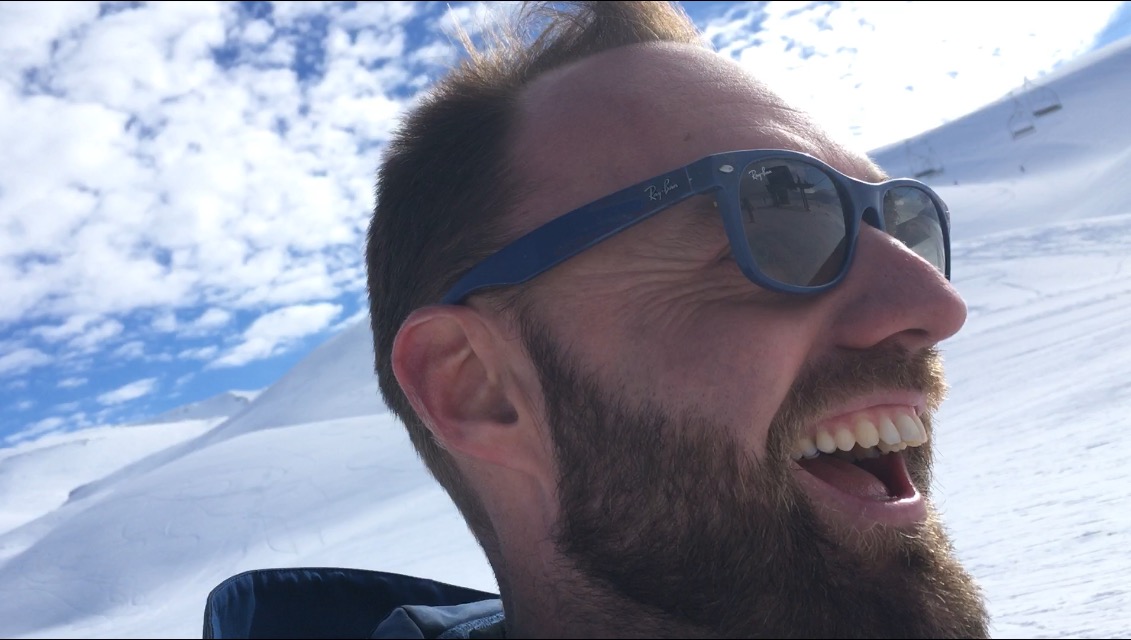 Thank you George and Rabih for one of my very best days in Lebanon! :)

I used to work as a ski instructor in Austria many years ago. Within the Saga I’ve only been skiing once which was four years ago. That was in Greenland which actually has something in common with Mzaar. Greenland has no trees and when you ski you look down across the ocean. Mzaar hardly has any trees and there too you see the ocean as you zigzag to the bottom. We truly had perfect conditions and my brief fear of having forgotten how to ski was swept away the second my skis touched the snow. Just like riding a bicycle ;) 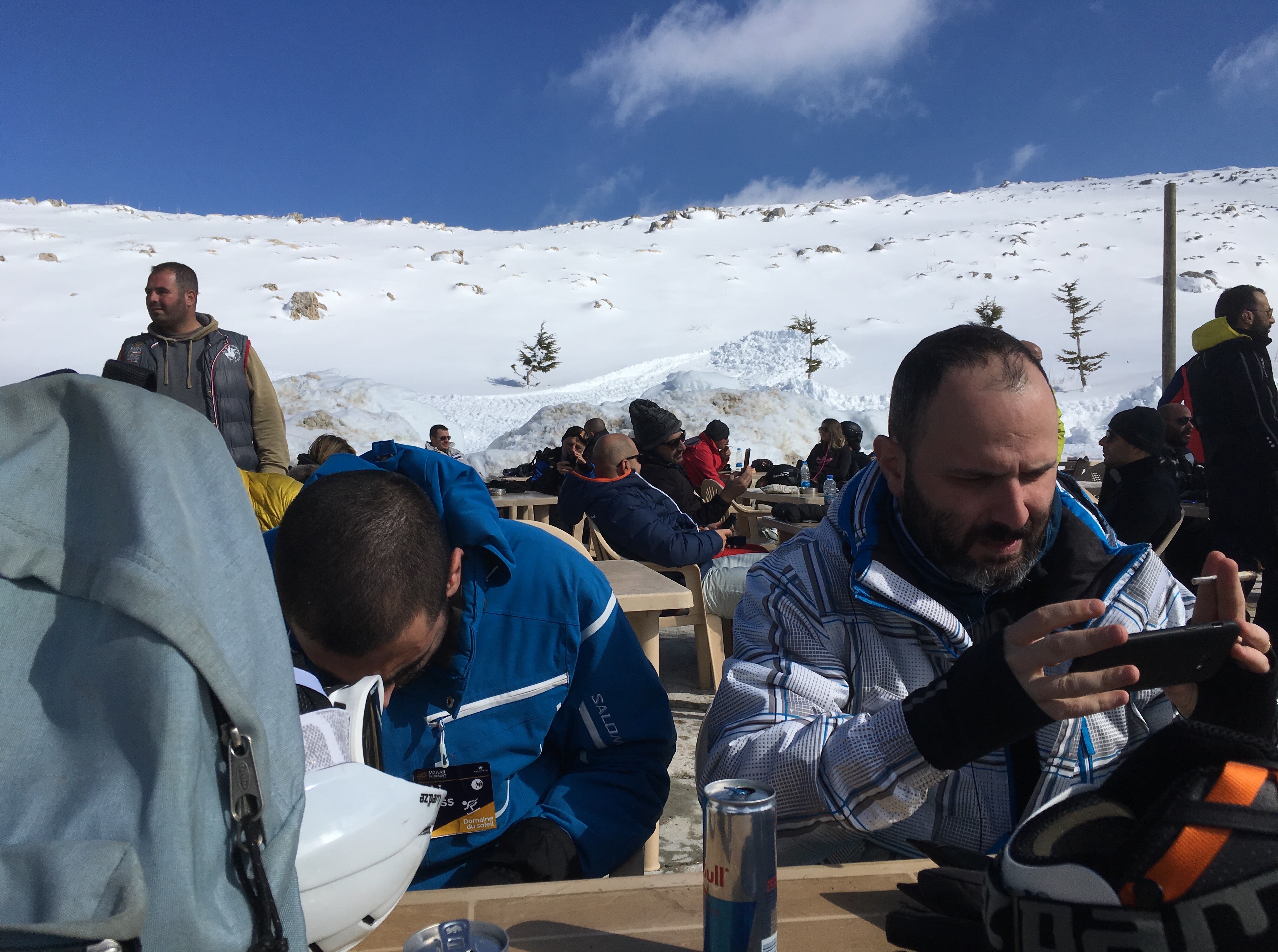 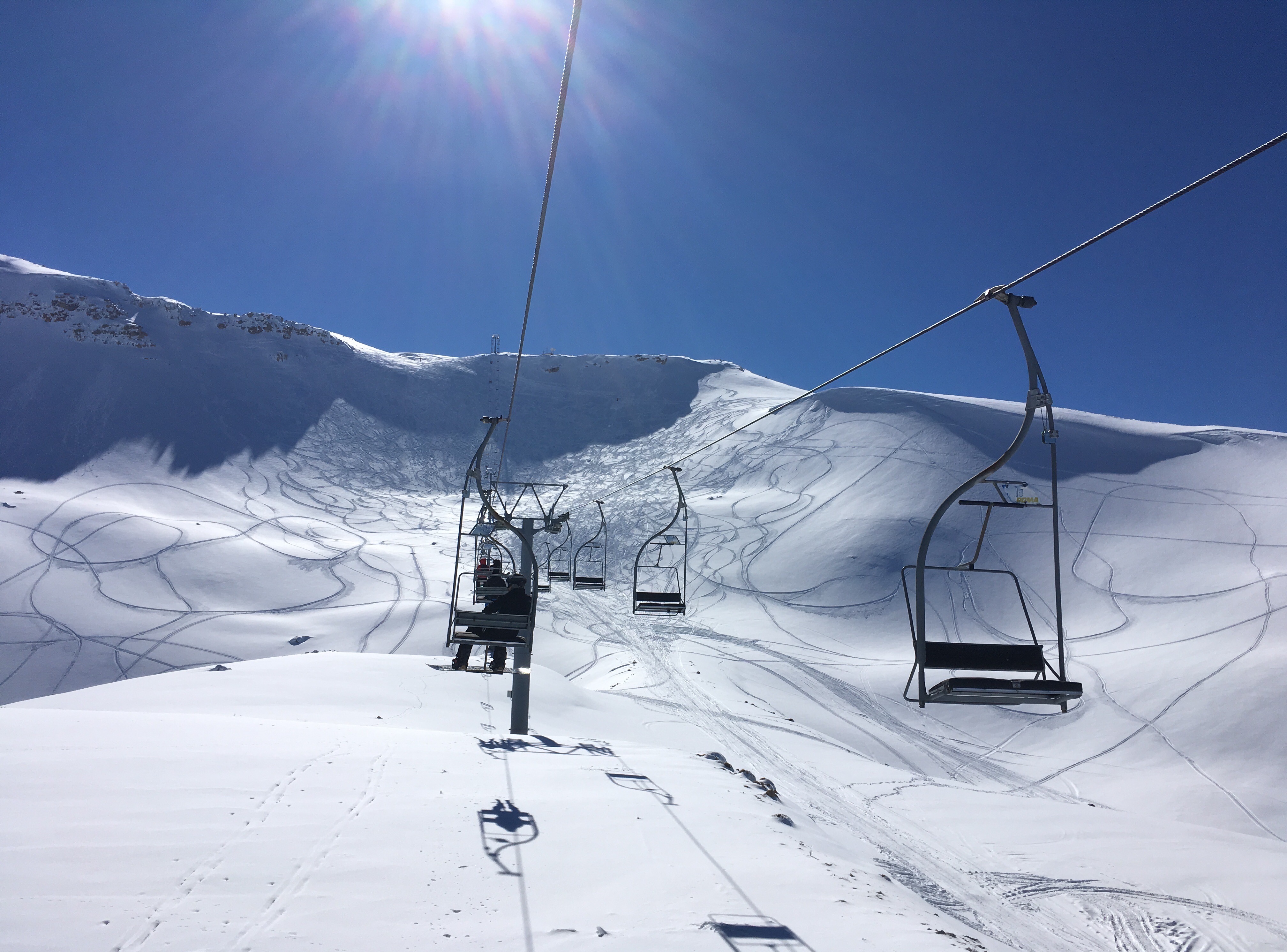 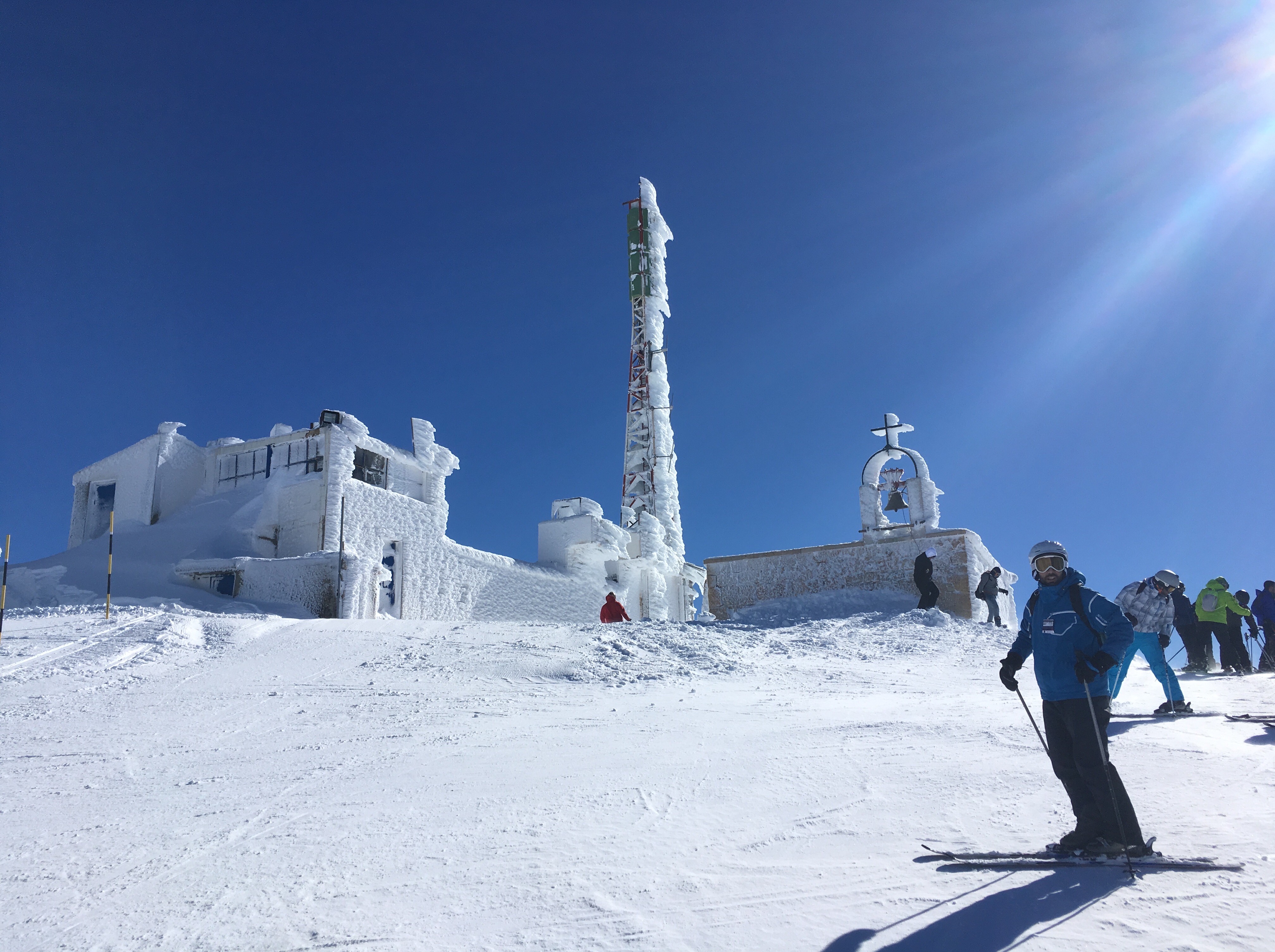 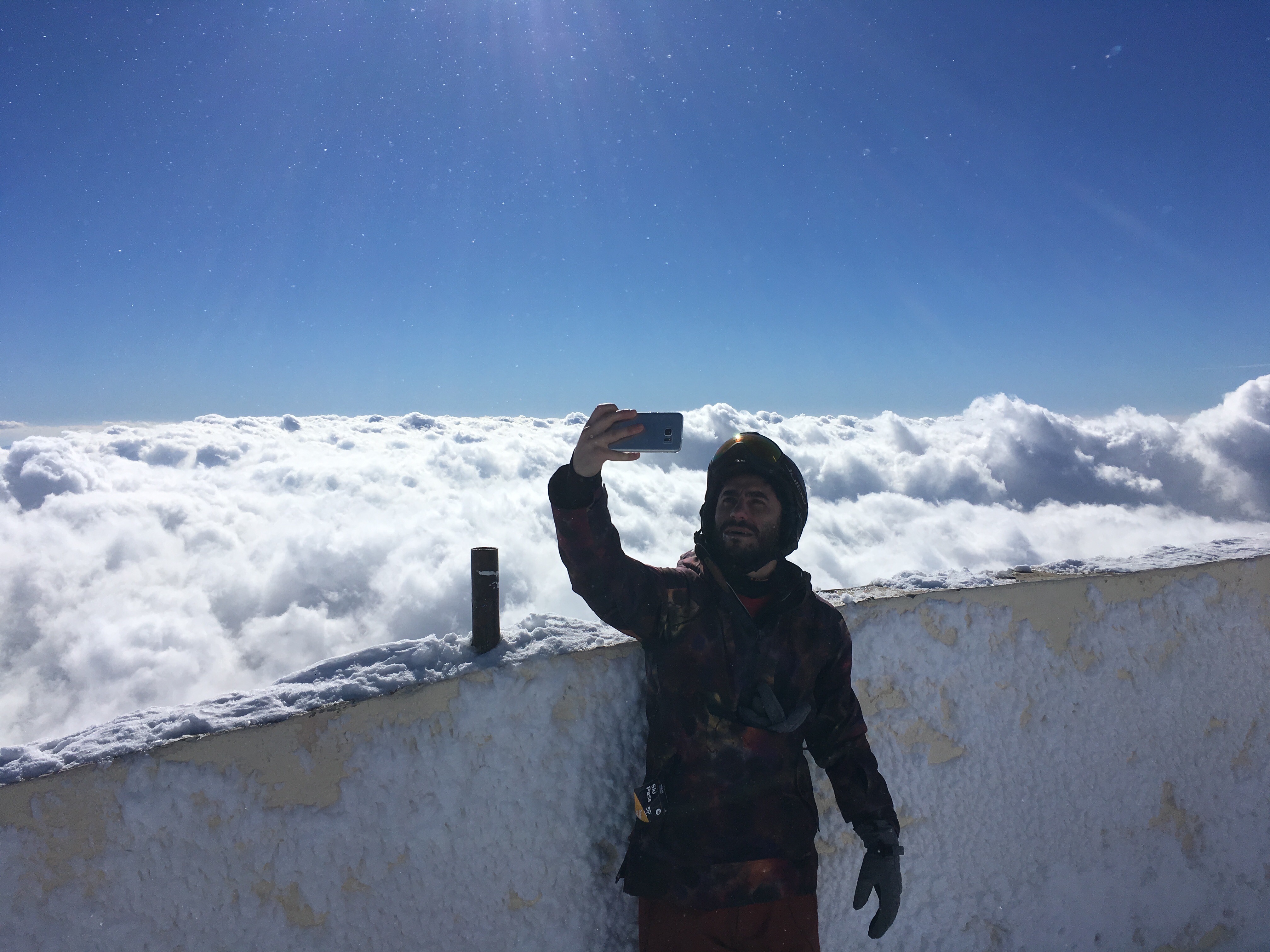 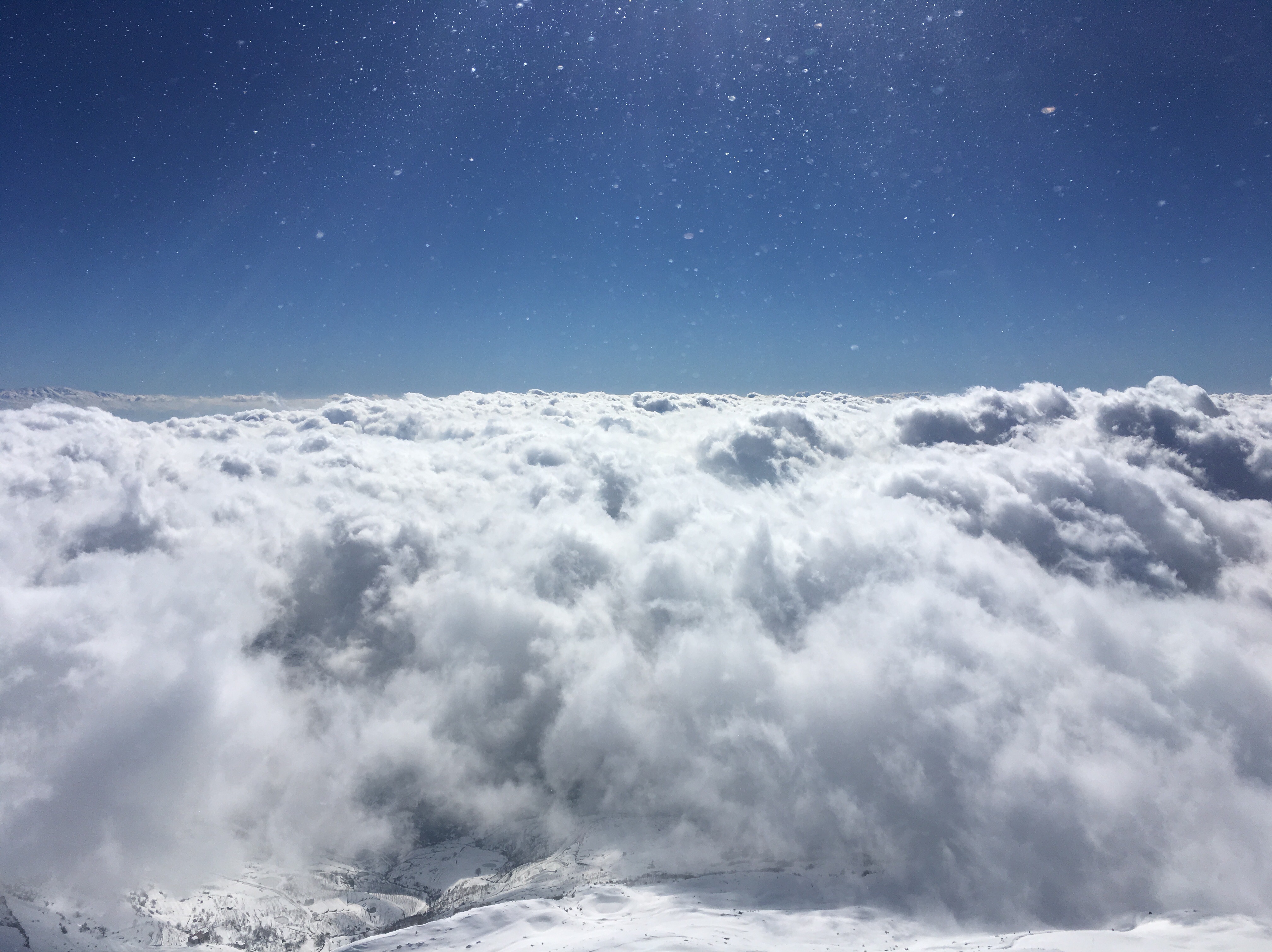 Above: perhaps my best photo yet? The view from Mzaar across the clouds. The snow in the wind looks like stars.

Below: the best way to end a day on the slopes is with a greasy cheese burger from Snack Simon! :) 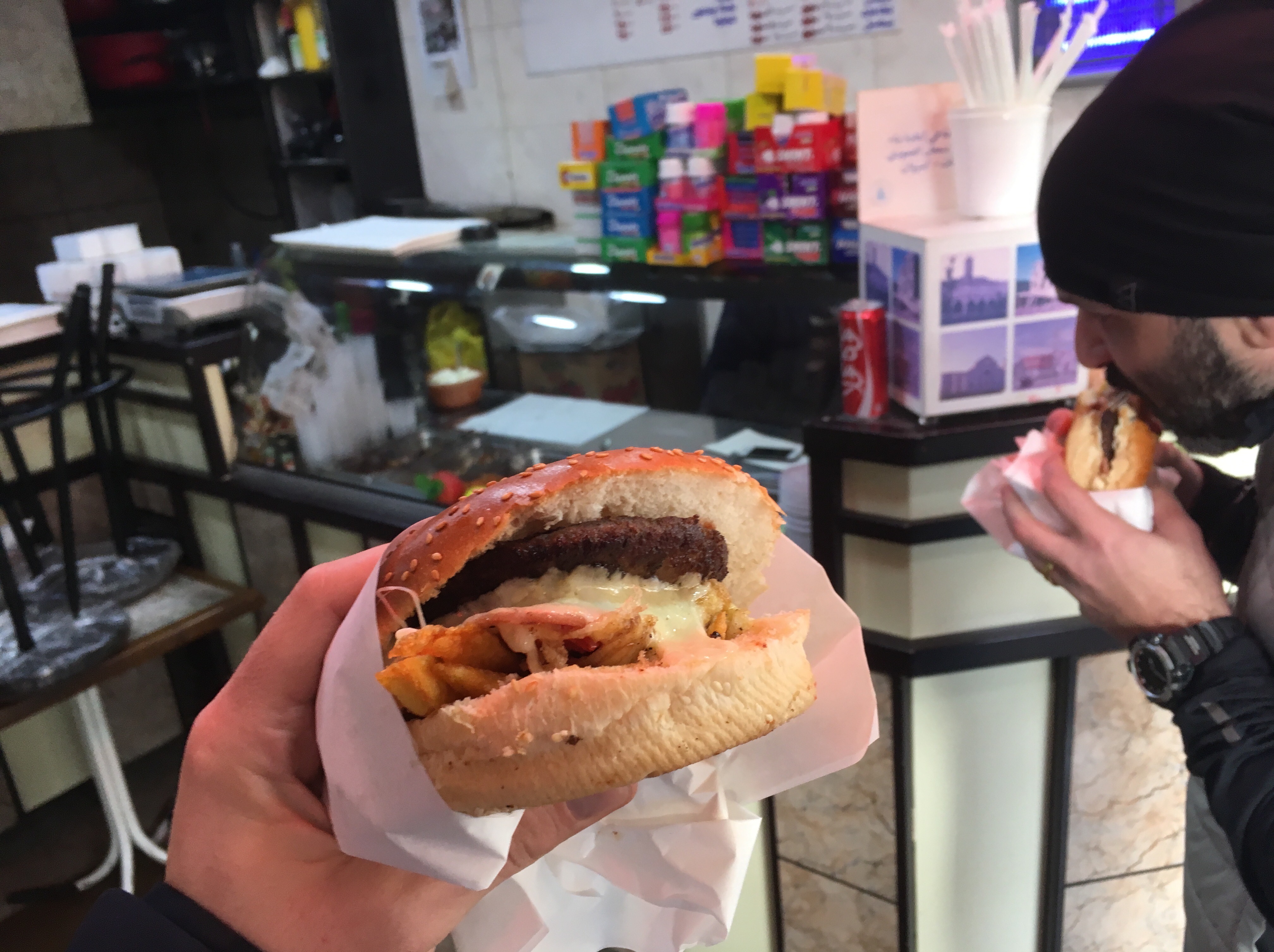 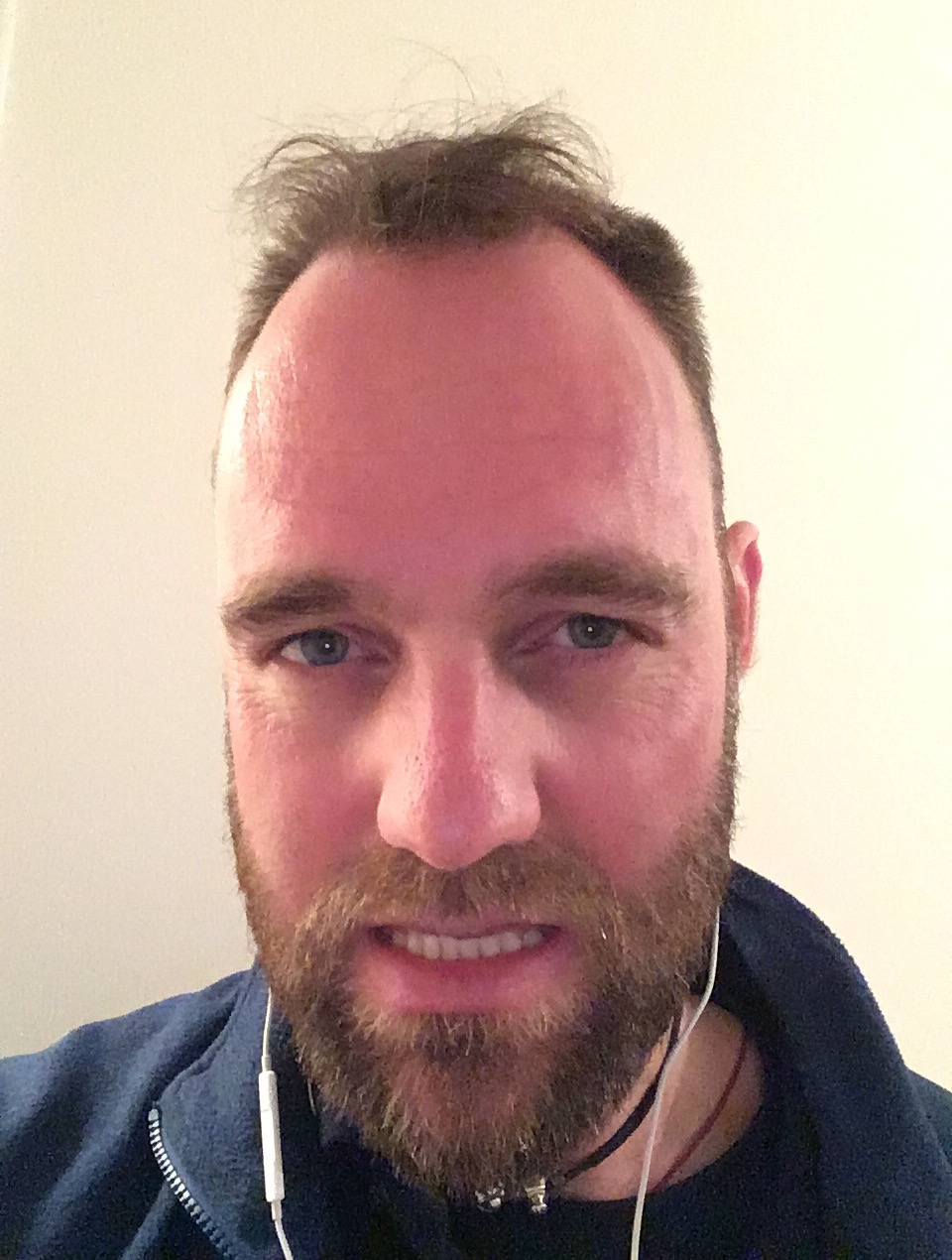 Remember sunscreen!! Stupidity is its own punishment!

I’ve been doing some research on quantum mechanics and quantum physics recently. It is not the first time I get caught up in quantum theory and I can go on about it for a long time. It’s pretty much like magic! We use quantum physics on an everyday basis. It surrounds us in our every day life and yet we hardly understand it. How can something be in two different places at the same time? Why does something react to something else thousands of kilometers away without any obvious connection? Why do salt crystals form cubes while ice forms hexagons? It’s pretty fascinating and very complicated. I won’t go more into it now - I just wanted to say that I’ve been spending time on that too. I’ve also watched season five of Suits so now I’m ready for season six. I’ve been studying history, reading up on facts about various countries, I’ve looked into future logistics, I’ve started on applying for additional visas, I’ve been managing social media and I’ve been looking into finding a way to go to the top of Sama Beirut, which is Lebanon’s tallest building. 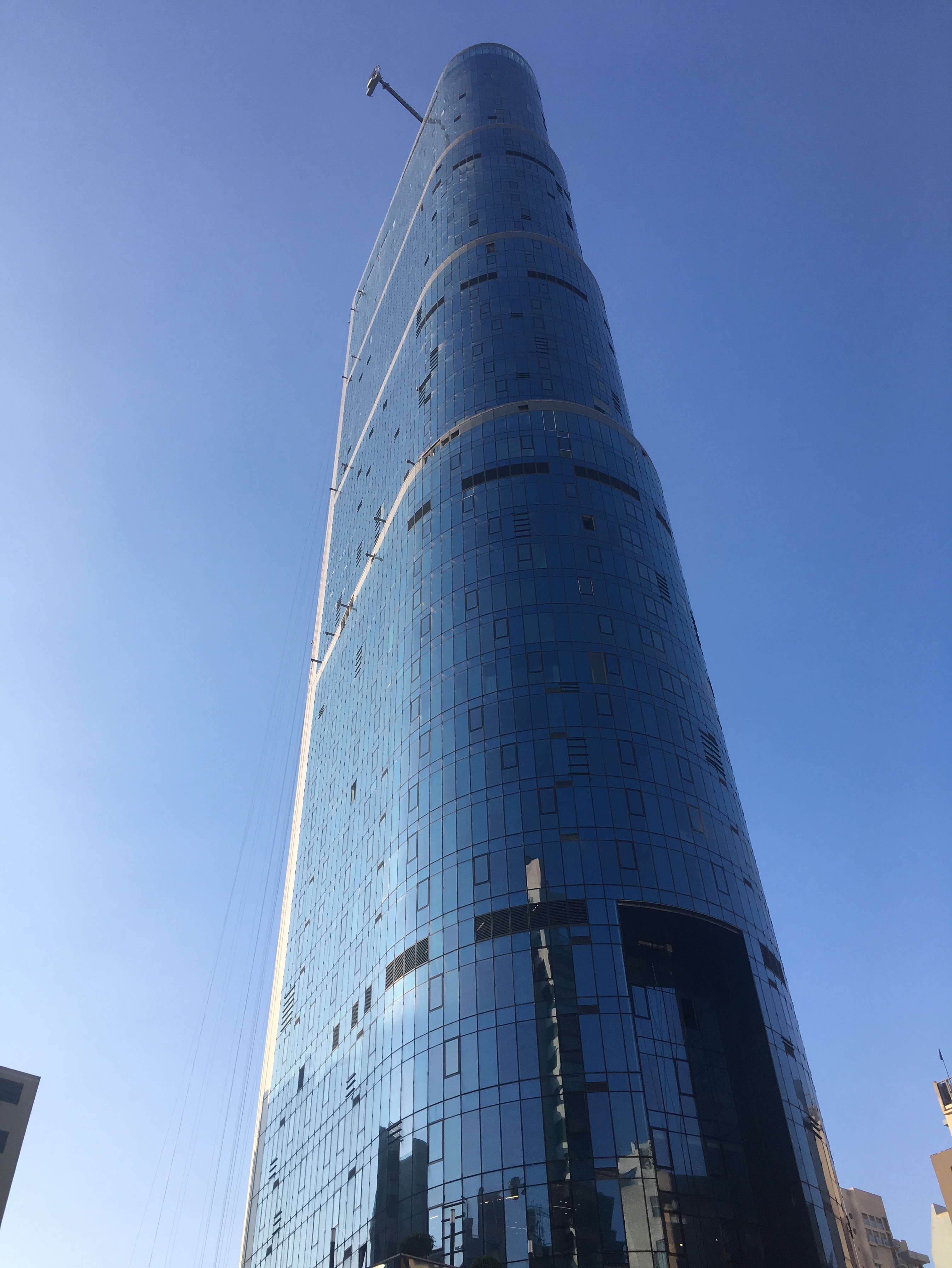 Sama Beirut in the afternoon. 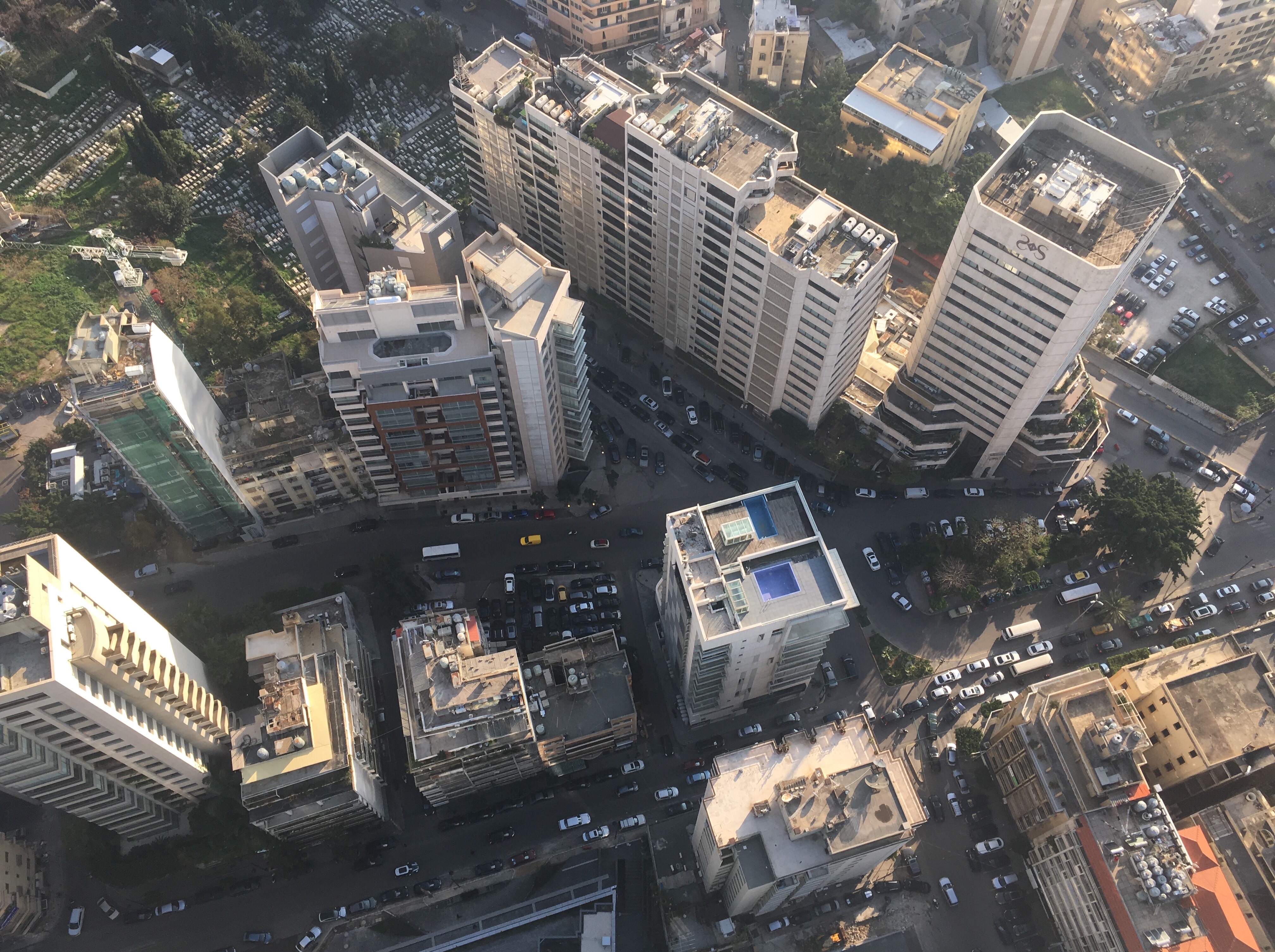 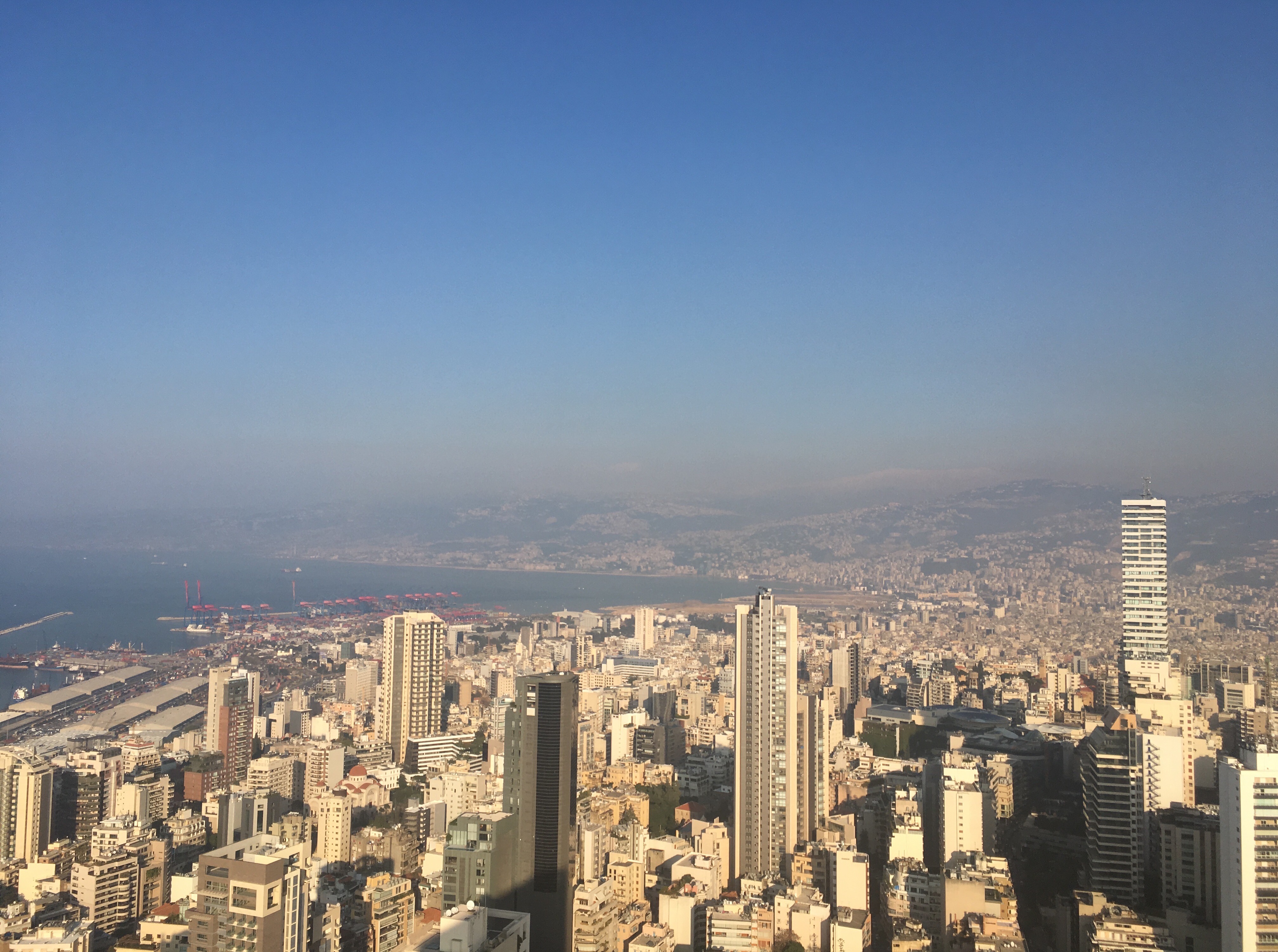 Thank you Jihad for providing this opportunity! :)

The penthouse apartment of the Sama Beirut is 1,414 m2 and the price is set for about $27 million! That’s more money than I’ll ever make in my entire life (probably). And then you still need to furnish it ;) Through Once Upon A Saga Instagram I got in touch with Jihad who works in sales and marketing at Sama Beirut. He invited me to come by and Philip (my Viking friend) joined in. Jihad is a great guy and together with him we took the elevator up to the 50th floor. The Sama Beirut is 195 meters (640 ft) tall and dominates the skyline. The first apartments were put on the market in 2016 but the penthouse is still free if you have $27,000,000 lying around ;) 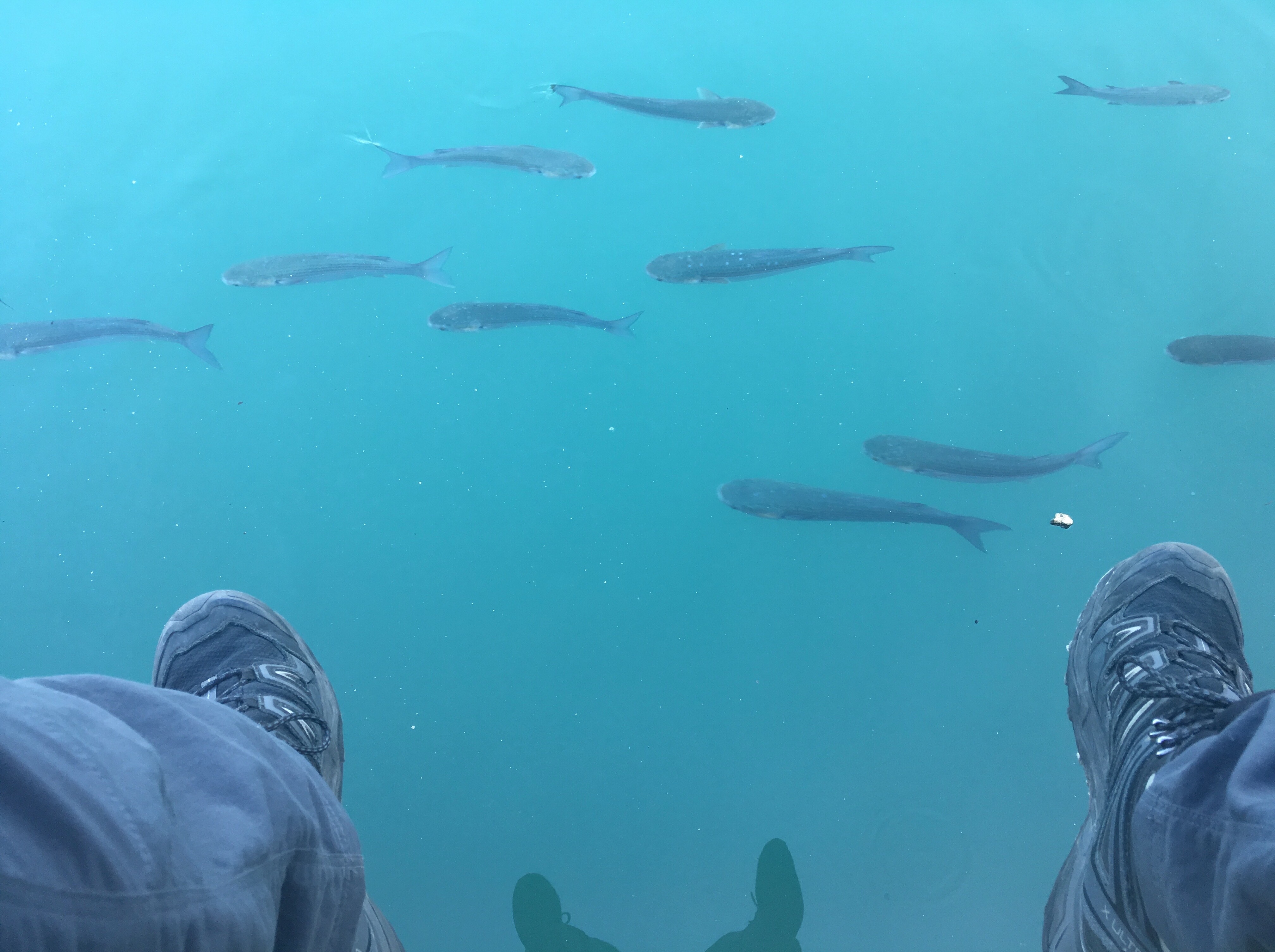 Shereen from www.frontpage.co.com set up an interview with Tele Liban. The lovely Neyla Tabbara met with me near the marina and we are now holding out for the results :)

I asked online if there was anything I should enter into this blog? Any questions you want answered or anything specific you want to know? Jorge Zelaya was the only one to ask anything. On the flip side Jorge had two questions:

How has this experience taught you to overcome obstacles???

That’s an interesting question. I guess the clearest example is to say that I wouldn’t have come this far if I gave up anywhere along the past four years and three months. By that I mean I’m rewarded by not giving up and have 143 countries behind me, many fond memories, lots of practical experience and a truckload of new friends all around the world. The key to succeed in a project like this is not only to be stubborn and never give up. If you’re sitting at the bottom of a well and you’re only stubborn then you’ll never get out. You also need to look for alternative ways forward and create opportunities. The stories are manyfold but overall I can say I got this far by being able to make new social connections, think outside of the box and get out of bed when I had no reason or will to do so.

When do you plan to reach your goal? When will you finish and where?

That’s a much easier question. We have 60 countries left and 143 countries behind us. It’s been 1,576 days since I left home which means an average of 11 days/country. Now we can estimate that the remaining 60 countries will take 660 days to complete which is just shy of two years. The last country of the Saga is the Maldives and I’m fairly sure nobody there knows it ;) 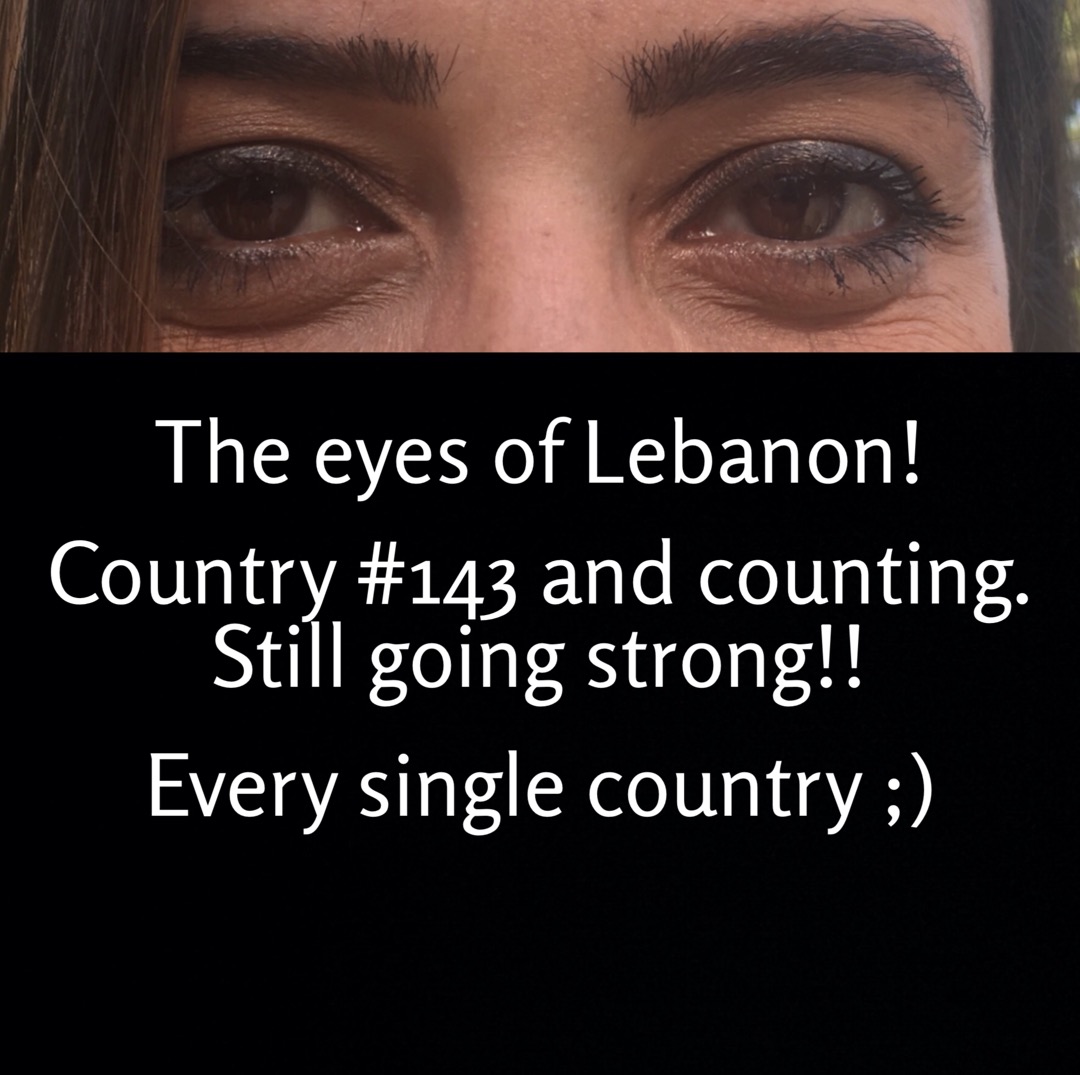 Your assignment, should you choose to accept it: smile to a stranger or two and ask them where they are from :)

HAPPY #THROWBACKTHURSDAY! 🙂 On April 7th 2021, it was a Wednesday, I got my second jab of the Pfizer BioNTech vacc… https://t.co/IaGRS2mXd2

I will DEFINITELY #bungyjump when the Saga reaches #NewZealand 😍🇳🇿 https://t.co/fd0FyfUvPJ