It truly looks like I’m in Hong Kong for the long term. It has been long already but it will be longer still

The weather around here is either hot and humid, or grey skies and hard rain. The difference between the two is often just a matter five minutes so good luck getting dressed for the day. I have several times checked the weather forecast and expected one or the other. But I find the weather forecast in Hong Kong rather useless. The Hong Kong Observatory is however really effective in warning against typhoons, cyclones, extreme heat etc through a free app called HK Warnings. For a while now we have been “enjoying” roughly 31C (87.8F) and close to 80% humidity. 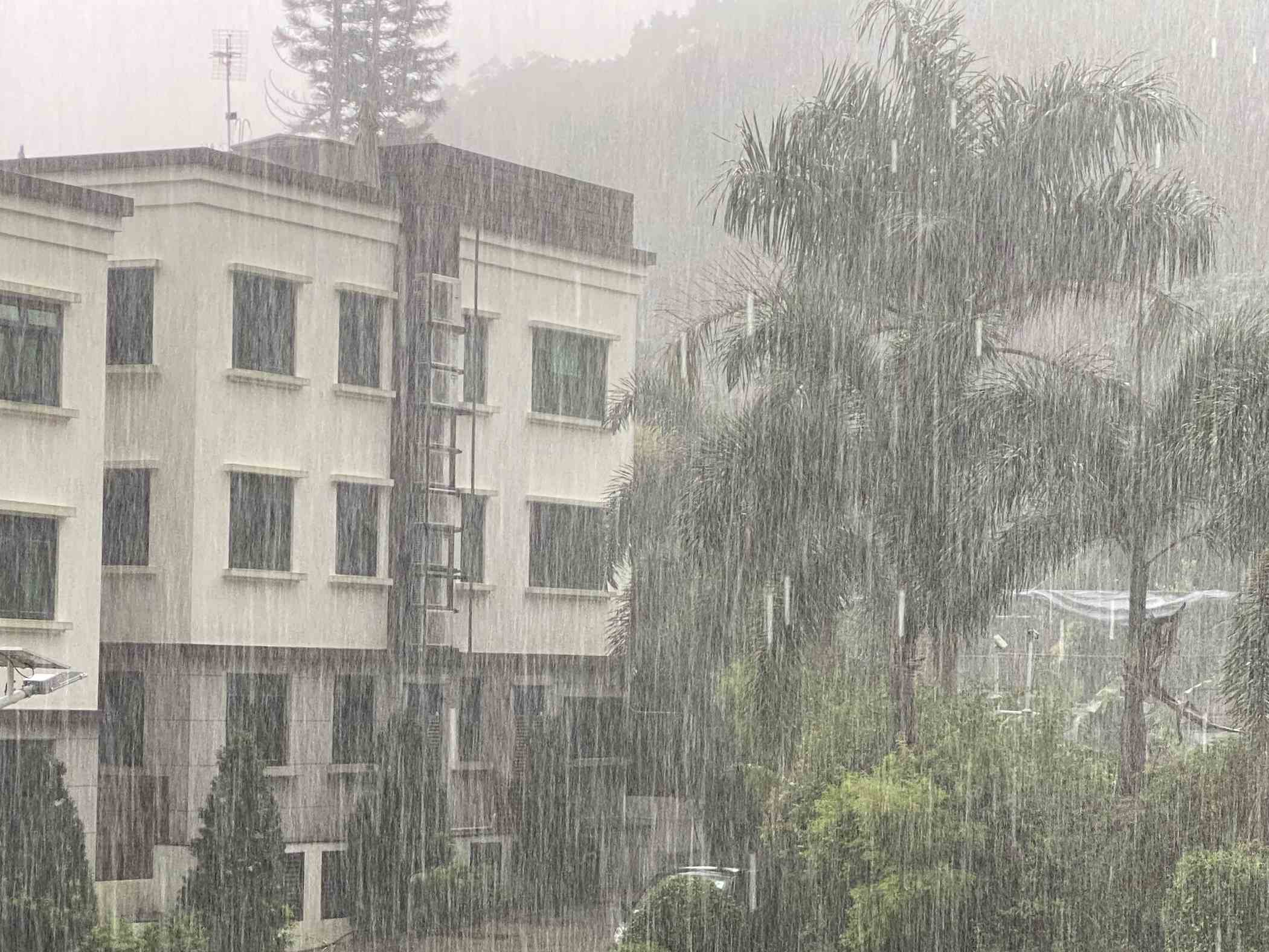 I’m well aware that there are plenty of stories about countries getting ready to open up for tourism again. And that is great news. Unfortunately it doesn’t seem to have a strong connection to when the Saga may be able to continue. Shipping-wise the world is in a problematic situation. I wrote about this in last week’s entry. Hong Kong’s borders remain closed as do those of New Zealand, Australia, Palau and many more. Most other borders remain closed to be frank. The COVID-19 situation in H9ong Kong is as good as it gets however Hong Kong is closely related to mainland China and Beijing has recently seen a spike in cases so that keeps Hong Kong’s borders shut. And the ships which are struggling to make crew changes are definitely not risking getting the virus onboard. So let’s get that cure on the market ASAP! The overall “lock down picture” is beginning to look more and more unsustainable to me. We have known for a long time that those most vulnerable to COVID-19 are people above a certain age, those with comorbidity and people who struggle with obesity. Smoking is apparently also a really bad idea as it creates more receptors for the virus to attach too. I wonder if it isn’t just time to open the world up again? Simply open the borders and go back to work. As we know who to protect and shield from the virus then we might simply do that while the rest of the world continues. We could carry on with hand sanitizers, masks and a level of social distancing until the cure is on the market. Wouldn’t that be better than keeping the world locked down? I don’t know…I’m just thinking and perhaps I need to think some more. 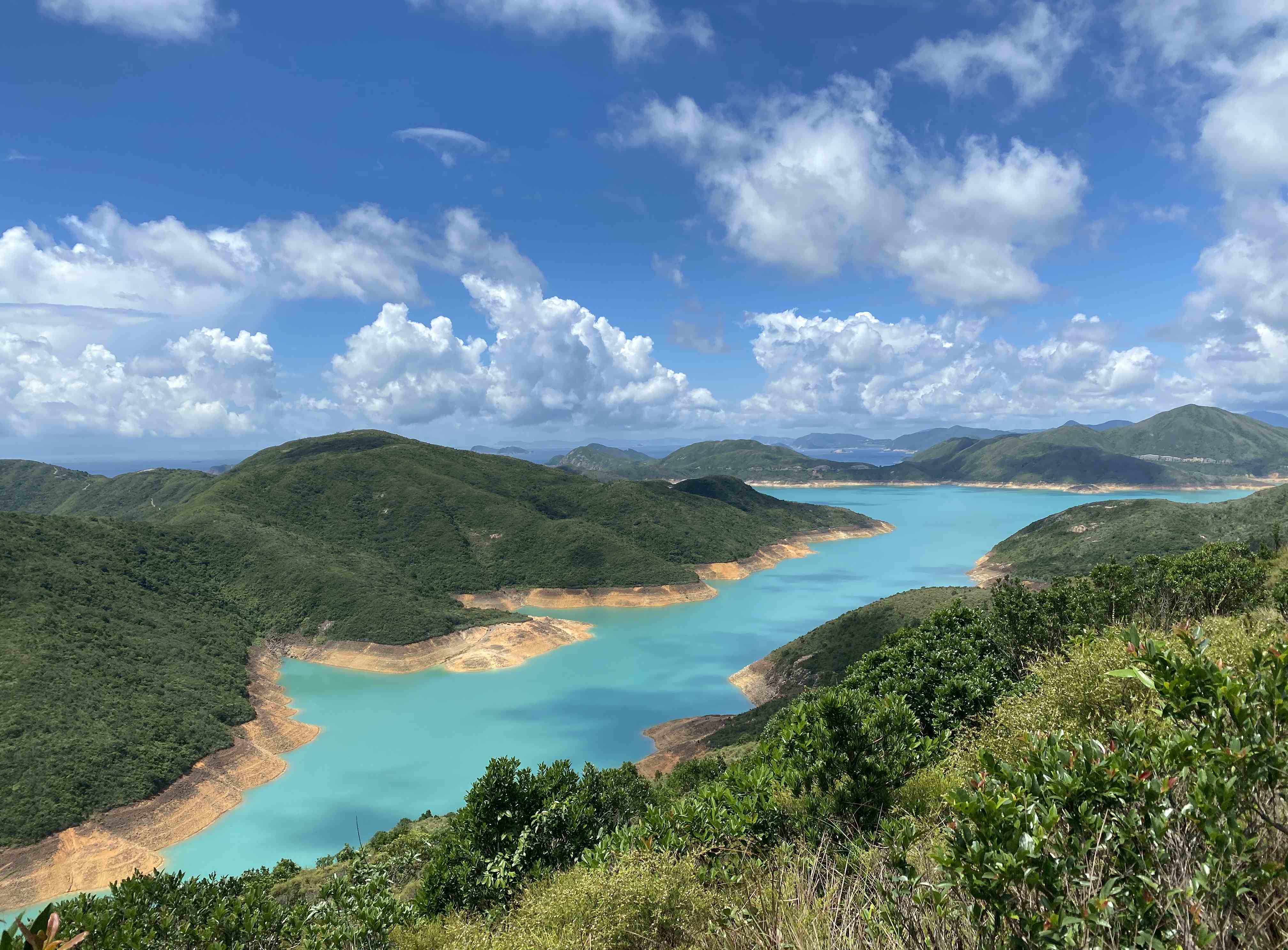 The unfiltered reality of what High Island Reservoir looks like on a clear day.

This week started off with a brilliant challenge! Jakob, who’s another Viking from the Kingdom of Denmark in the high north of Europe, is an expat here in Hong Kong and super competitive. He’s also a great guy and friend of Ole who just flew his family back to Denmark last week. Last Monday Jakob and I had dinner and then went on to try some whiskey. Somewhere in between all of that we decided to challenge each other to see who would complete the week with the highest amount of steps!! As mentioned: Jakob is highly competitive. So this is a lot of fun! Jakob had a head start on me with roughly 20,000 steps but that did not faze me at all. Because I’m pretty competitive too ;) 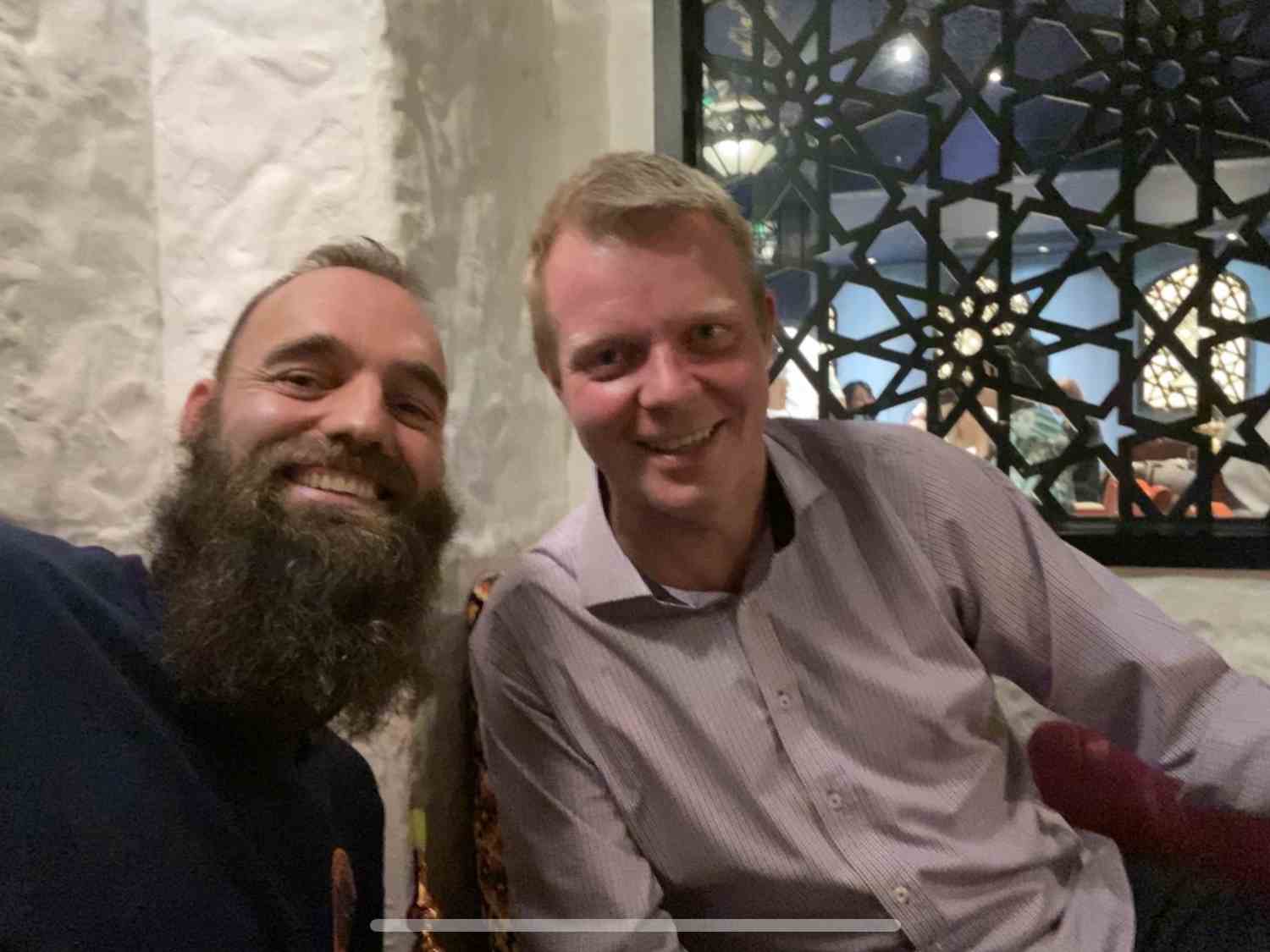 Jakob...in the belief that he will win. Lets see about that. 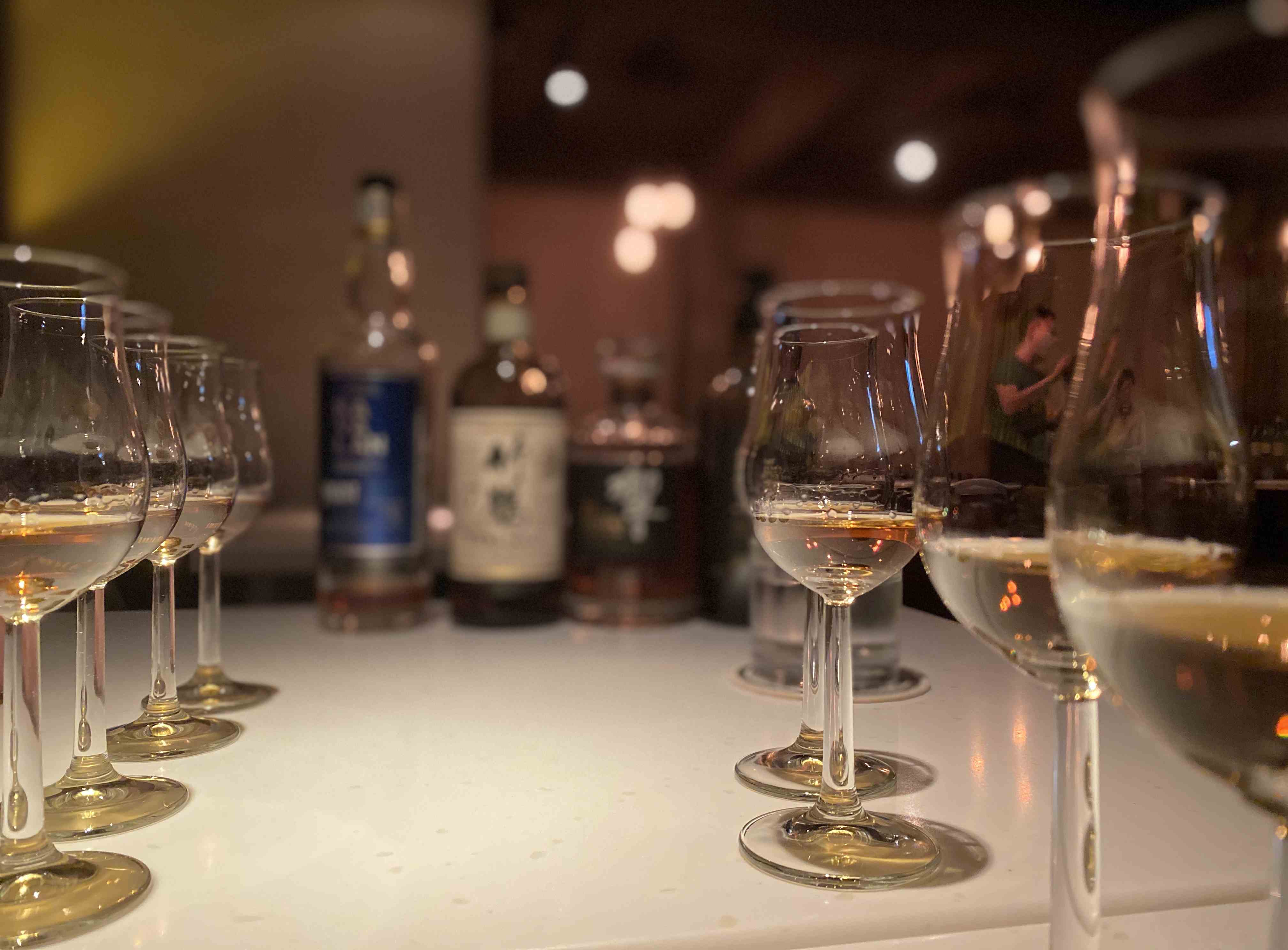 So Monday, Tuesday and Wednesday Jakob was ahead in the race. But I had a plan to change that. I worked late Wednesday night (02:00am) and took Thursday off! Thursday morning I then sat out early to complete stages 1+2+3 of the MacLehose Trail in an attempt to even things out and get ahead. Over a period of 7.5 hours I covered 36km (22.4mi) with an 1,581m (5,187ft) elevation gain clocking up about 39,000 steps ;) 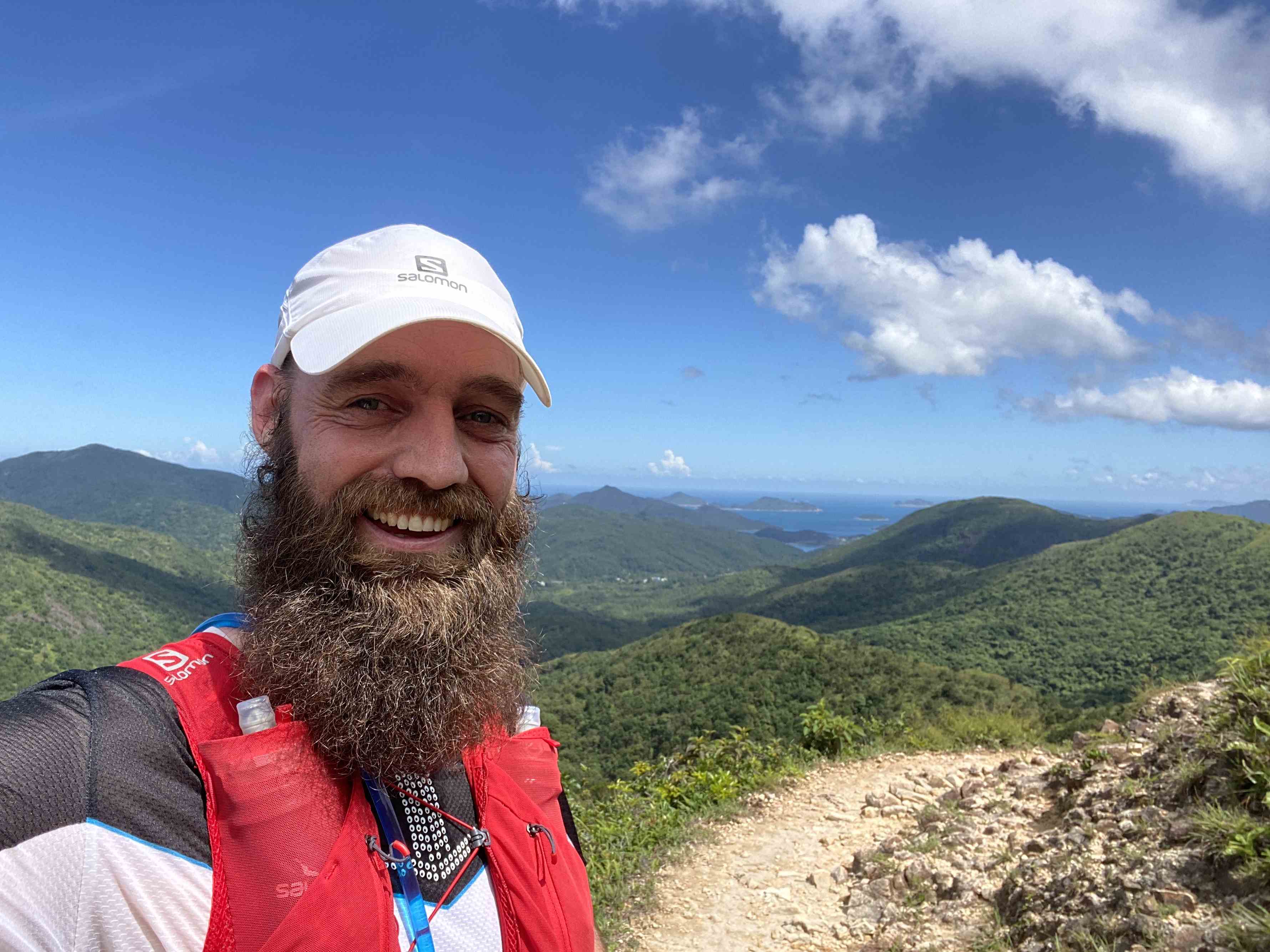 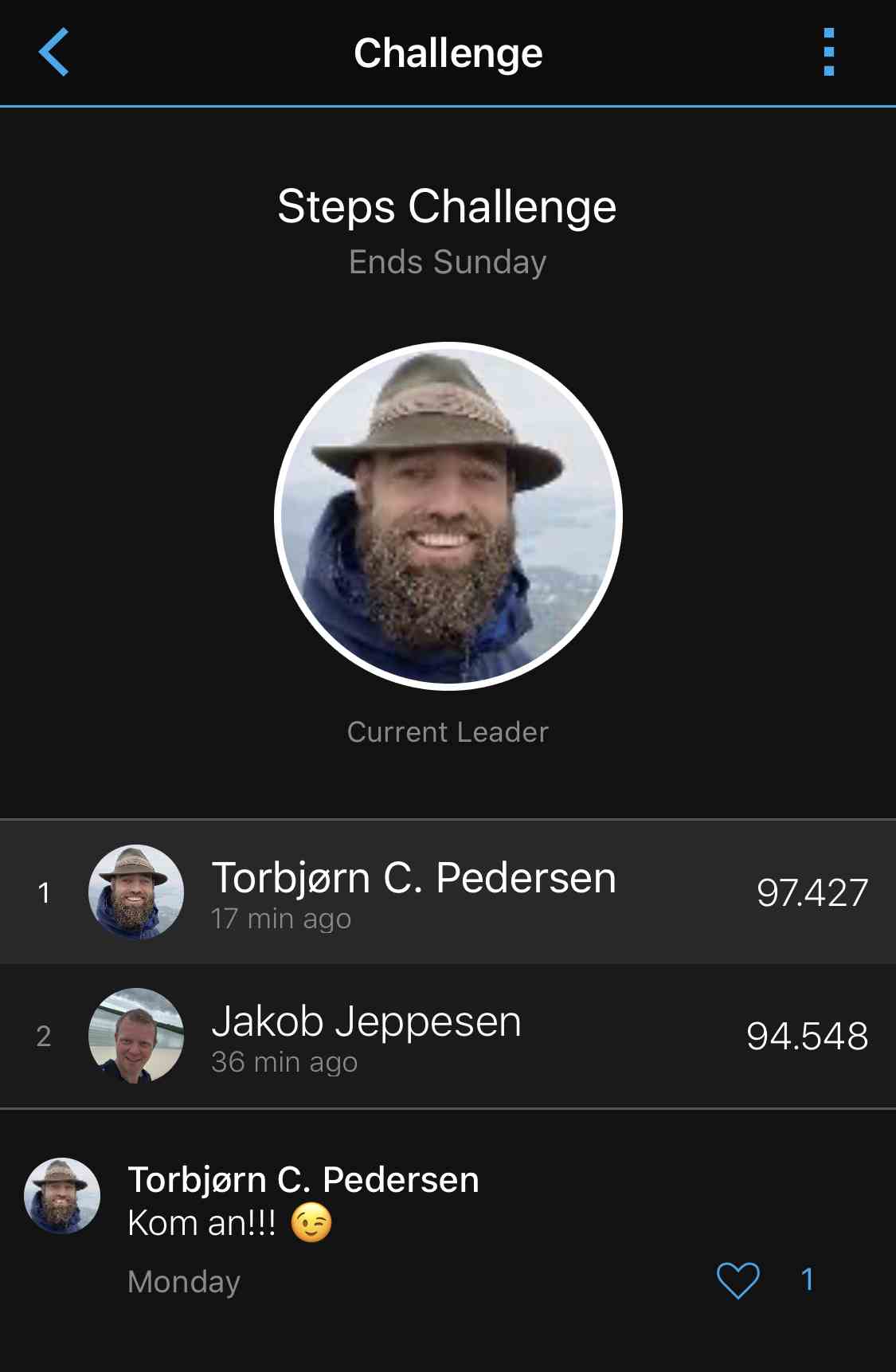 This week also presented Harry’s birthday! It used to be a big laugh when we joked whether I would be around for his birthday or not. Hahaha? Well…last Wednesday we welcomed Harry to join the rest of us in “the double digits club”! Harry is the youngest son in this wonderful family which has now hosted me in Hong Kong for 143 days! And Harry turned ten years old!! On the day I picked him up at his school and treated him lunch at The Foreign Correspondents' Club. Harry really wanted to visit the club on his birthday and he also wanted to meet an important person! To accommodate Harry’s wish I invited my friend Tim Huxley to join us. He is the Director of Mandarin Shipping which owns thirteen ships and he is furthermore both the treasurer and Second Vice President of the Foreign Correspondents’ Club. Mission accomplished and Harry was happy. Incredibly I have now been in Hong Kong long enough to celebrate all five birthdays within the household of my host family. 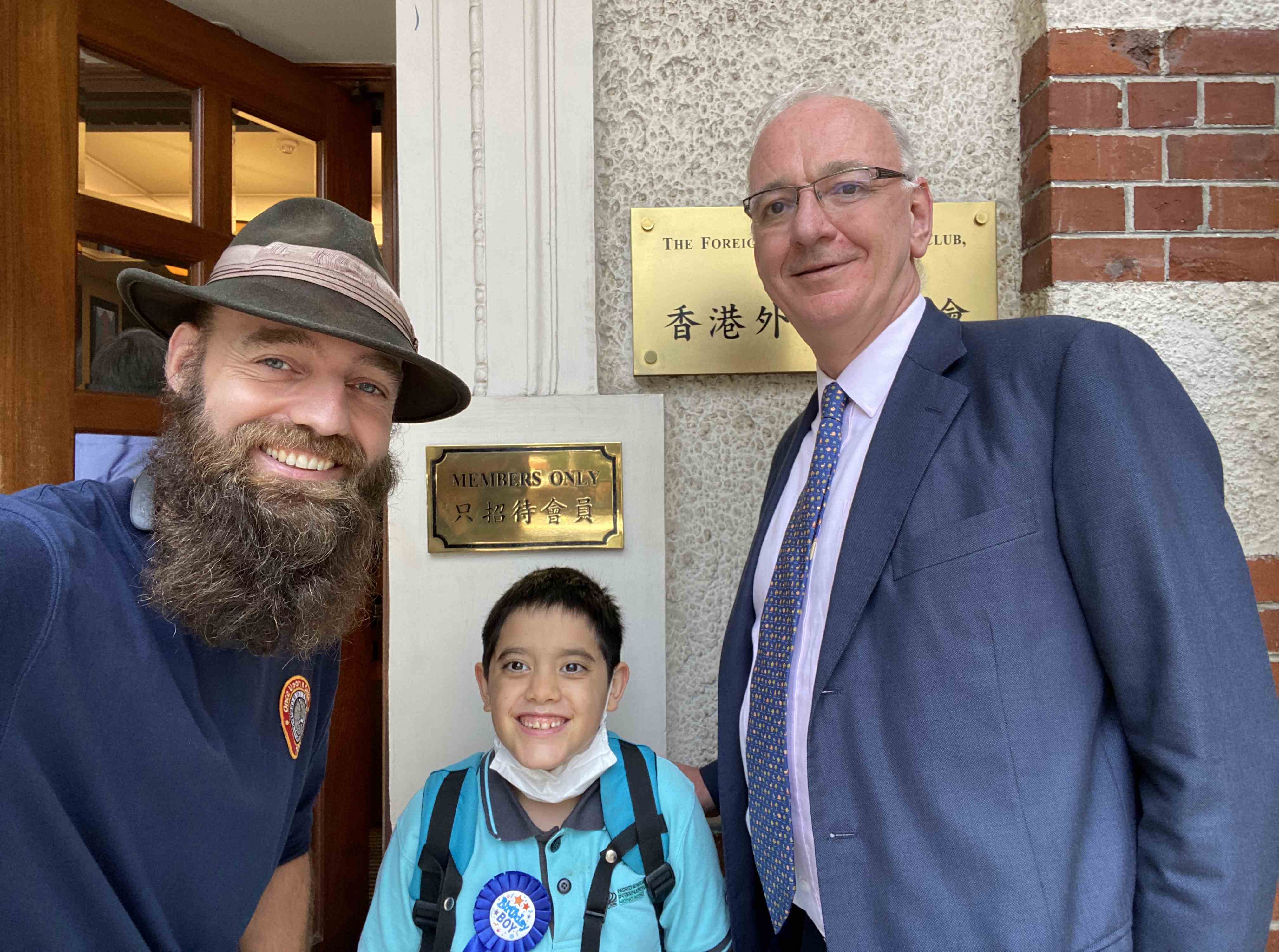 Harry with his 'Birthday Boy' badge next to Mr Tim Huxley in front of the Foreign Correspondents' Club :)

Yeah – so what about the Danish Red Cross? Anyone who has met me within the Saga is aware that I am both passionate and knowledgeable about the Red Cross. Well can you believe it: I still haven’t heard from my contact or Danish Red Cross HQ this entire year? It doesn’t surprise me though. It is not uncommon for them to give me the silent treatment. There is clearly some discrepancy between my version of the Saga’s role within the movement and that of the Danish Red Cross. And just for the record I’ll once again stress that the Danish Red Cross as a national society is doing a formidable job on the humanitarian front. Lives around the world are better due to the long standing efforts of the Danish Red Cross and efforts by fellow national societies (191 other countries). It is simply mind-boggling to me that the Danish Red Cross along with the IFCR (International Federation of the Red Cross Red Crescent) has managed to get so little out of the efforts that have come out of this project since October 10th 2013. I have after all personally engaged with the movement across 189 countries which is something no other person on earth can say. And that effort alone has cost somewhere around a year of this project. The Sagas values include integrity, strength, humanity, persistence, accomplishment and furthermore offers a rich heritage of both motivation and inspiration to people. I wonder how that wouldn’t be compatible and useful to the Danish Red Cross? Furthermore the Saga took its beginning at Dybboel Moelle (Dybbøl Mølle) in Denmark which is a historical setting for the 1864 Second Schleswig War in which Louis Appia and Charles van de Velde attended as the very first Red Cross observers in history. Not to mention that the Saga began in 2013, which was 150 years after the Red Cross was formed (1863). Yeah…you’d think it wouldn’t take much effort to make great use of a Red Cross Goodwill ambassador who has accomplished all of that. And yet I haven’t heard from the Danish Red Cross HQ all year. Oh well…that’s just me wondering about lost opportunities. I’m sure they have a good excuse for not replying to me when I contact them. They must be busy. So in your case please don’t stop donating to the Red Cross. It does after all help alleviate the suffering of the most vulnerable people on earth. 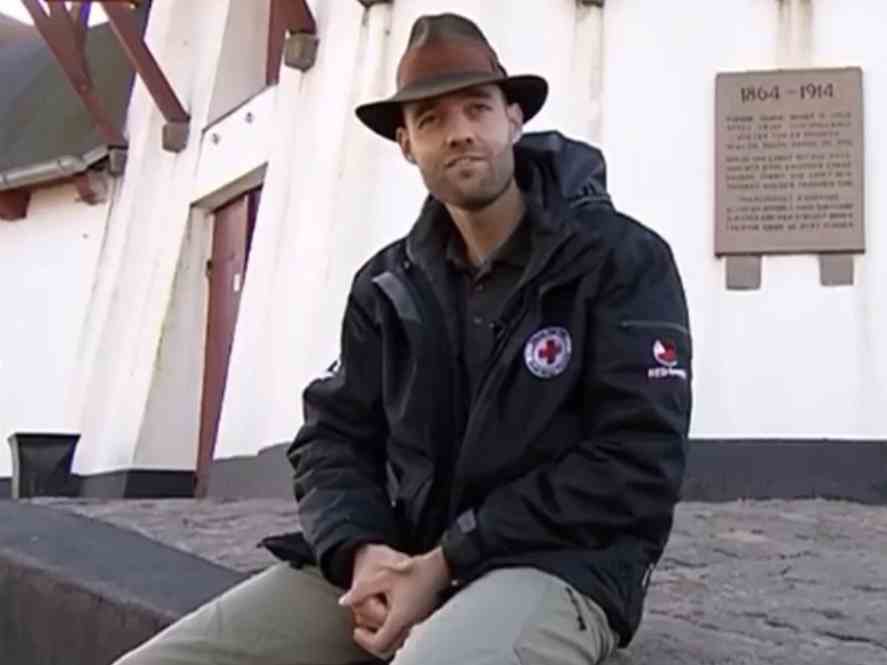 And that brings us to the end of this entry. I’m mentally exhausted and will take a break next week. I have spoken with the Hong Kong Tourism Board who have been helpful in contacting some luxury hotels. So starting next week I’ll be living it up from Monday to Saturday. The idea is primarily to take a social break and have some alone time. It will also be nice to wake up to new surroundings. The Savagars have truly been the most incredible hosts I could ever wish for. They are almost like family and they have taken really good care of me. However it is time to give them their home back. Nobody could have imagined that my stay in Hong Kong would have run this long and 143 days is equivalent to nearly five months. So I will be moving into an apartment starting from July 1st which has come into place with help from a group of Danes in Hong Kong. I’m sure that I could have continued to stay with the Savagars if I only asked but I am truly in awe that they have hosted me for as long as they have and I think it is time for a change. Especially now that I sense that I am stuck in Hong Kong long term. It will be the end of an era and the beginning of a new. 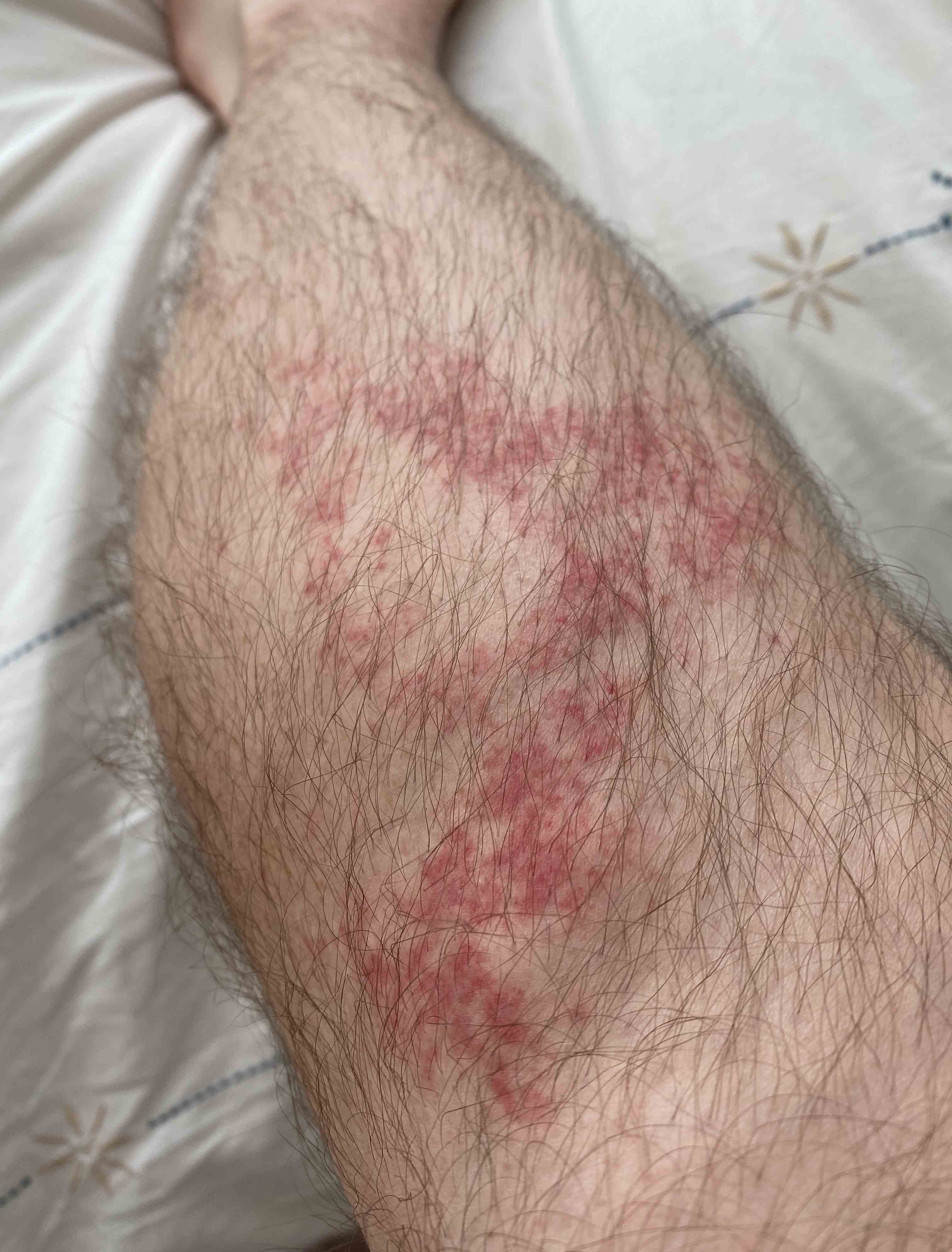 Thank you all who wrote me regarding my leg last week. It was gone after just three days. We think it was exercise-induced vasculitis which is commonly known as "Disney rash", "golfers rash" or "hikers rash".

Every so often when receiving change you’ll get a coin which predates the handover 🙂 The transfer of sovereignty o… https://t.co/pVBcAdz8w4

@ThomasLindegard Keep on keeping on 👍 #KOKO