Making the best of it

My goodness!!! We came to Hong Kong for four days of transit and now we have been stuck here for A HUNDRED TIMES THAT!! Fortunately, we have been making the best of our time here. Anything else would have been sad.

Last week’s entry: Fighting for what we believe in (still in Hong Kong)

First things first: We're stuck!! I don’t know when we will be able to move forward. I hear that both Sri Lanka and the Maldives are open for tourism now. They are far away though – imagine getting on a ship for weeks or months and then while onboard learning that the borders have been shut again. Rumors have it that Australia might not open up until 2022. The land borders around Hong Kong are still closed, ships are reluctant of taking passengers, the nearest of our remaining nine countries are closed and the world is still dealing with general uncertainty of the pandemic. It seems that priority residents in Hong Kong are about to get vaccinated now. I haven’t been able to find any information about whether anyone has been vaccinated yet though? Soon I guess. I need to carefully chose which vaccination I want (if I can) because it won’t do us much good if the one I get isn’t accepted in any of the remaining nine countries. Yeah, it’s complex!! In the spirit of my Viking ancestors it seems that I should just get on a sailboat and head out on that great adventure! In the real world that isn’t a great idea. Apart from the hassle of organizing it, the journey would come with great risk and a very low probability for success. The most likely scenario would be to get chased away from land by the coastguard. 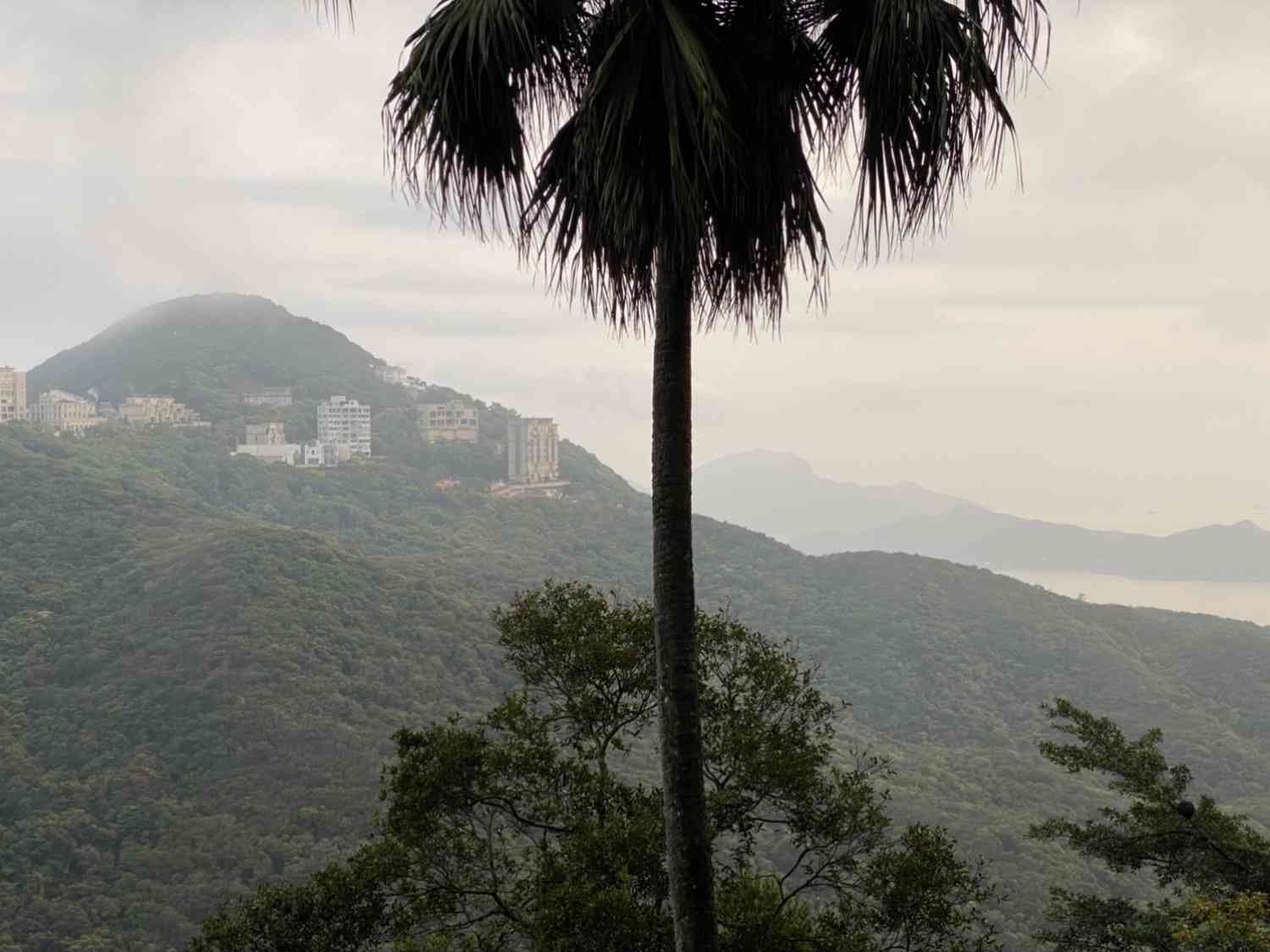 Yeah – so we remain stuck. And for how much longer? That is anyone’s guess. Wealthy nations have been hoarding vaccines which is preposterous! Yet, beneficial to the Saga as Hong Kong is undeniably wealthy. The pandemic is however a global affair and any country left unvaccinated can (and probably will) generate yet another mutation which could start things all over again. In wealthy countries families are usually small and the homes are spacious. In poor countries family sizes are often large while the homes are small. Where do you think the virus is more likely to spread quickly? Yeah… 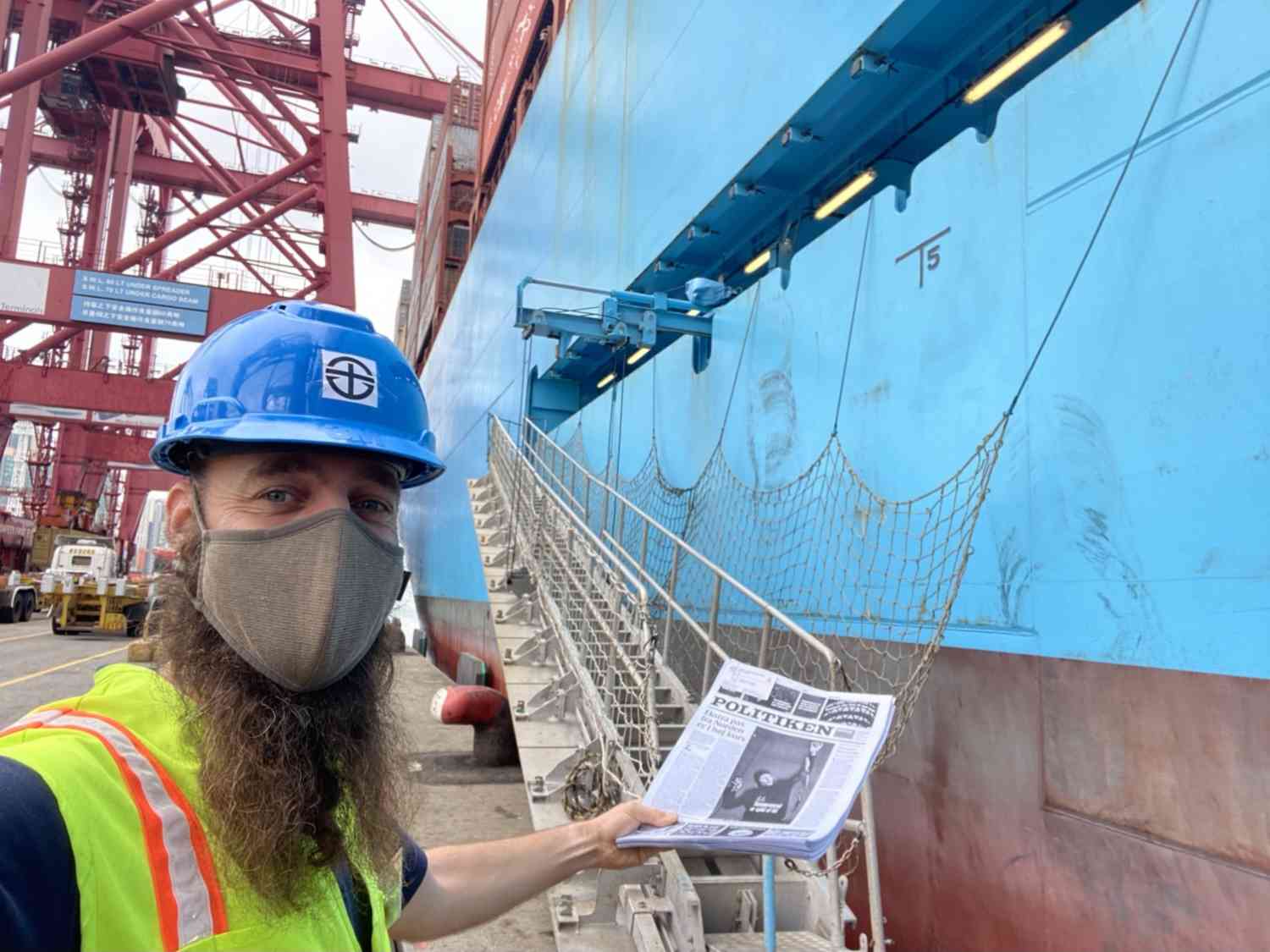 Delivering newspapers in six different languages to the crew. Most people have no idea how bad the situation is for the seafarers!! They don't want your pity. They are tough and know the job. But they deserve what's right and that is to acknowledge them as key workers. 90% of global trade is shipped. The crew NEEDS to be able to get on and off the ships for crew change.

Okay – the last 400 days. We reached Hong Kong on January 28th 2020 for a four-day transit before heading on a ship to Palau. The four days were extended by an additional week due to Chinese New Year. The virus had not been named yet and it hadn’t been declared a global pandemic. Wuhan, which is a thousand kilometers (620 mi) from Hong Kong was rapidly gaining fame in the media. After about a week in Hong Kong Palau closed its borders to Hong Kong, Macau and China. We looked toward making a connection to Palau via South Korea but a religious congregation brought the virus to South Kora which began spreading rapidly and borders were shut. Then we looked towards a solution through Singapore but domestic helpers had caught the virus which was now spreading rapidly and borders were closed. We tried to send me via Taiwan but they shut their border. Then we looked into getting me far away from the region on a ship to New Zealand or Australia. But they soon closed their borders as well. And then it was declared a global pandemic and we were stuck. For how long? A few months maybe? Haha…guess again. 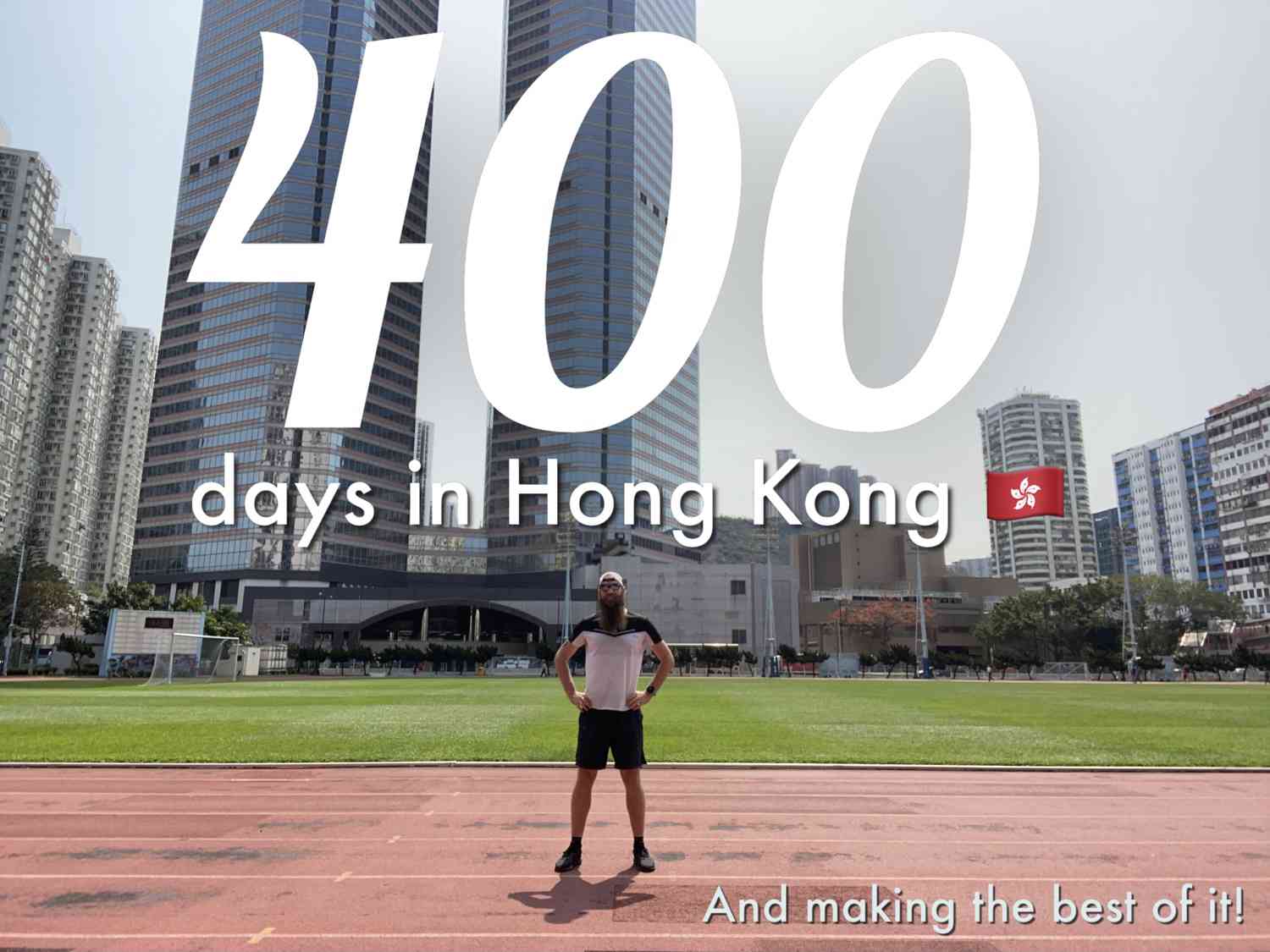 The Savagars hosted me for the first five months. Then I lived a month in Fotan near the Andersen Clan. Next stop became an apartment in Tsuen Wan West for several months before I landed in Kwai Chung where I still am now. Very fortunate one must say! Hong Kong can be expensive and especially because of accommodation prices! But people have been very kind to us in Hong Kong and I have always had a bed to sleep in. We’ve had more than ten speaking engagements while here, several collaborations with companies and organizations, we’ve made an astonishing amount of new contacts, I have personally made many new friends, we have explored Hong Kong at great length, an array of challenges have been achieved, interviews have been nearly nonstop, social media has grown remarkably and I would argue that I’m in much better health than before we arrived. In fact, probably better than almost any point within the past seven years. I was quite fit when this all began on October 10th 2013 but it has been in decline ever since. 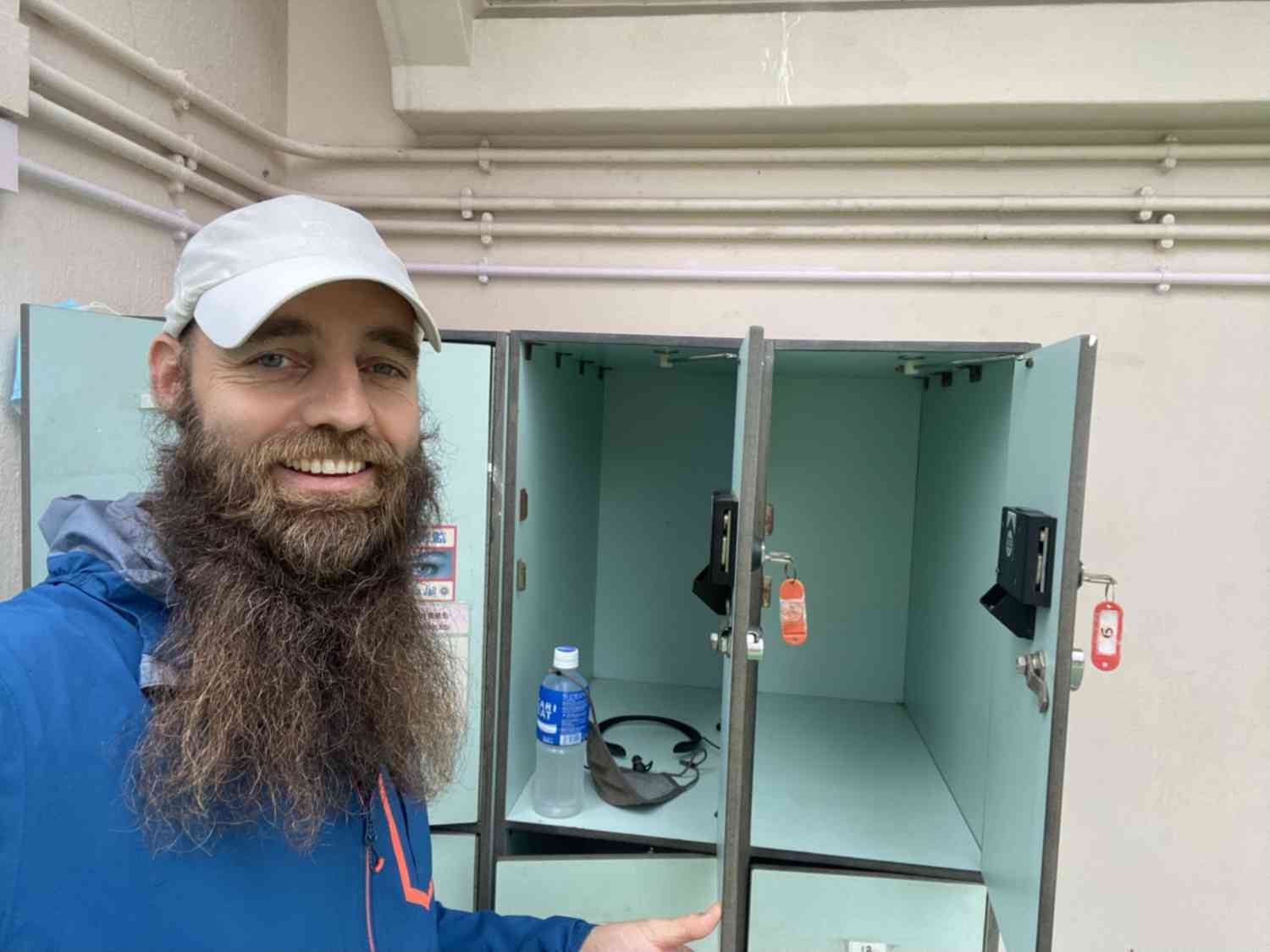 I have been training at Kwai Chung Sports Ground. 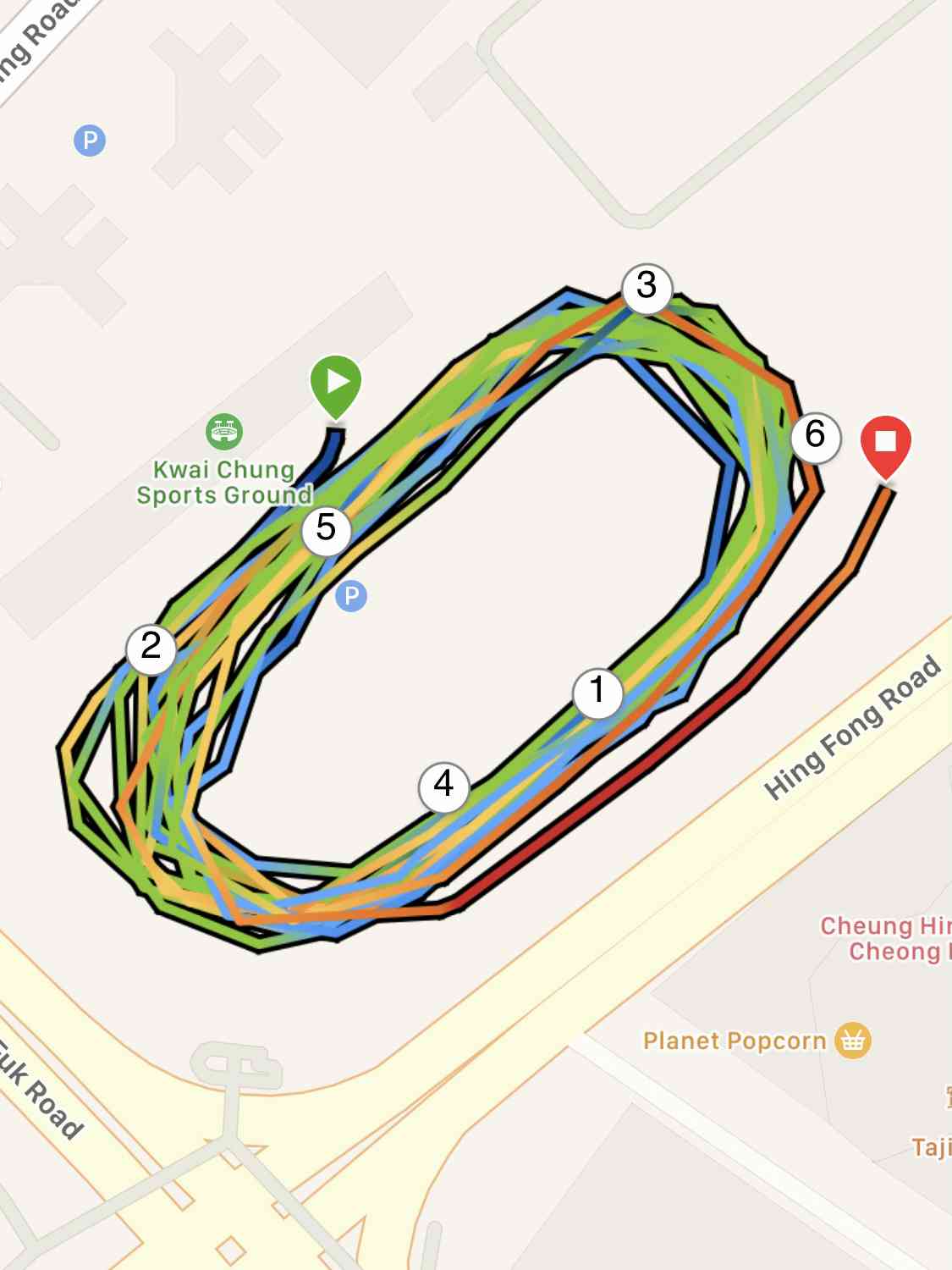 I find it truly remarkable how established I have become here in Hong Kong. I hold an employment visa, a Hong Kong ID, I have a job, an apartment and just two days ago I received my Hong Kong driver’s license. My bags have been unpacked for several months. I shop for groceries, cook most of my meals, do the dishes, clean the apartment, do my laundry, meet up with friends etc. For years I have been saying that something which helps me through Once Upon A Saga is that I hold a high degree of adaptability to my environment. Essentially, I can be happy anywhere. Or at least content. For years I have also been saying that the reason why most people who set out to visit every country never accomplish the goal, is because they settle down, fall in love and loose focus. Personally, I do not think I’m very patient. I think I am highly determined which can easily be misinterpret as patience. And my determinism is not wavering from the overall objective. But established in Hong Kong – oh yes indeed. 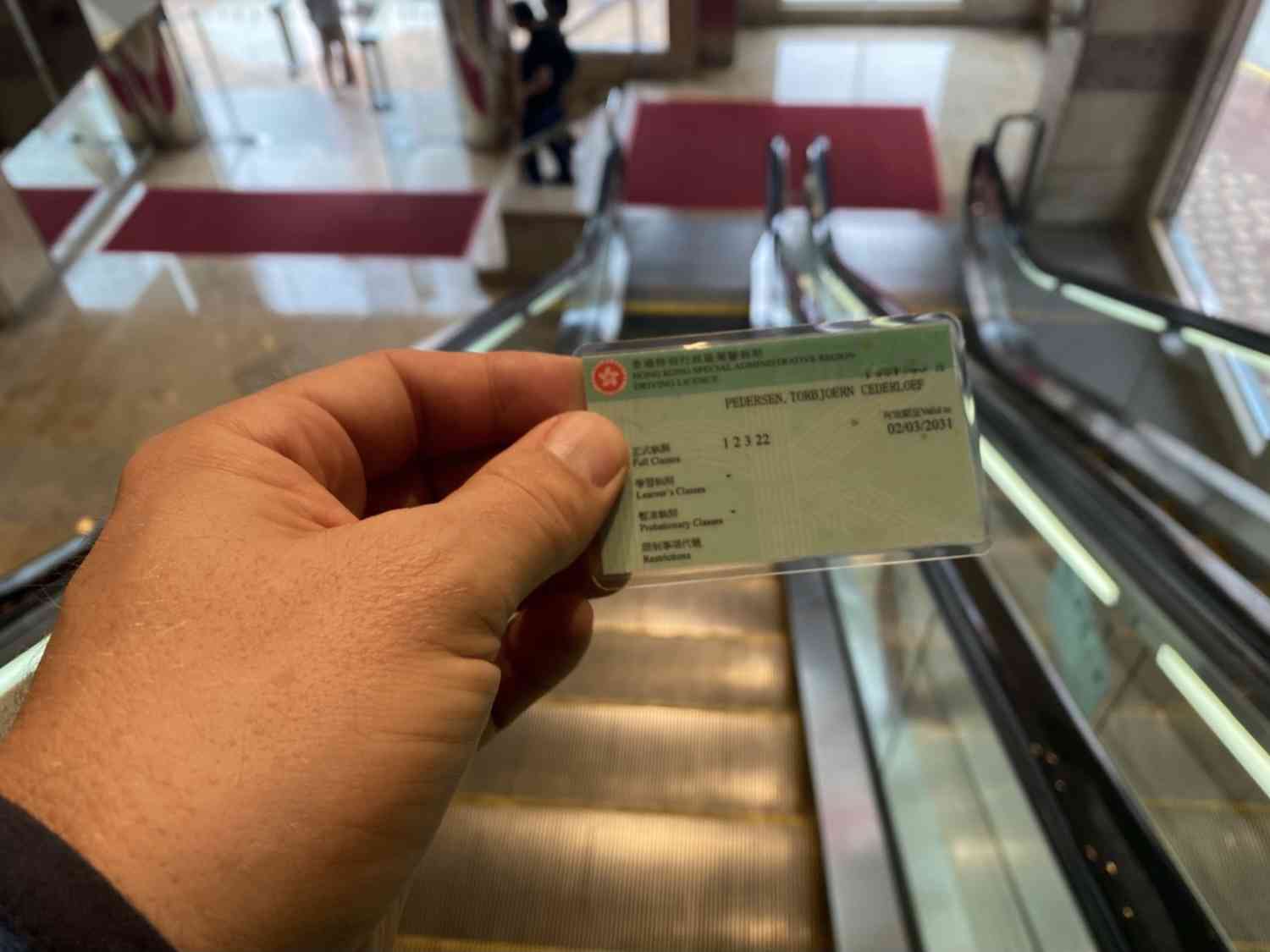 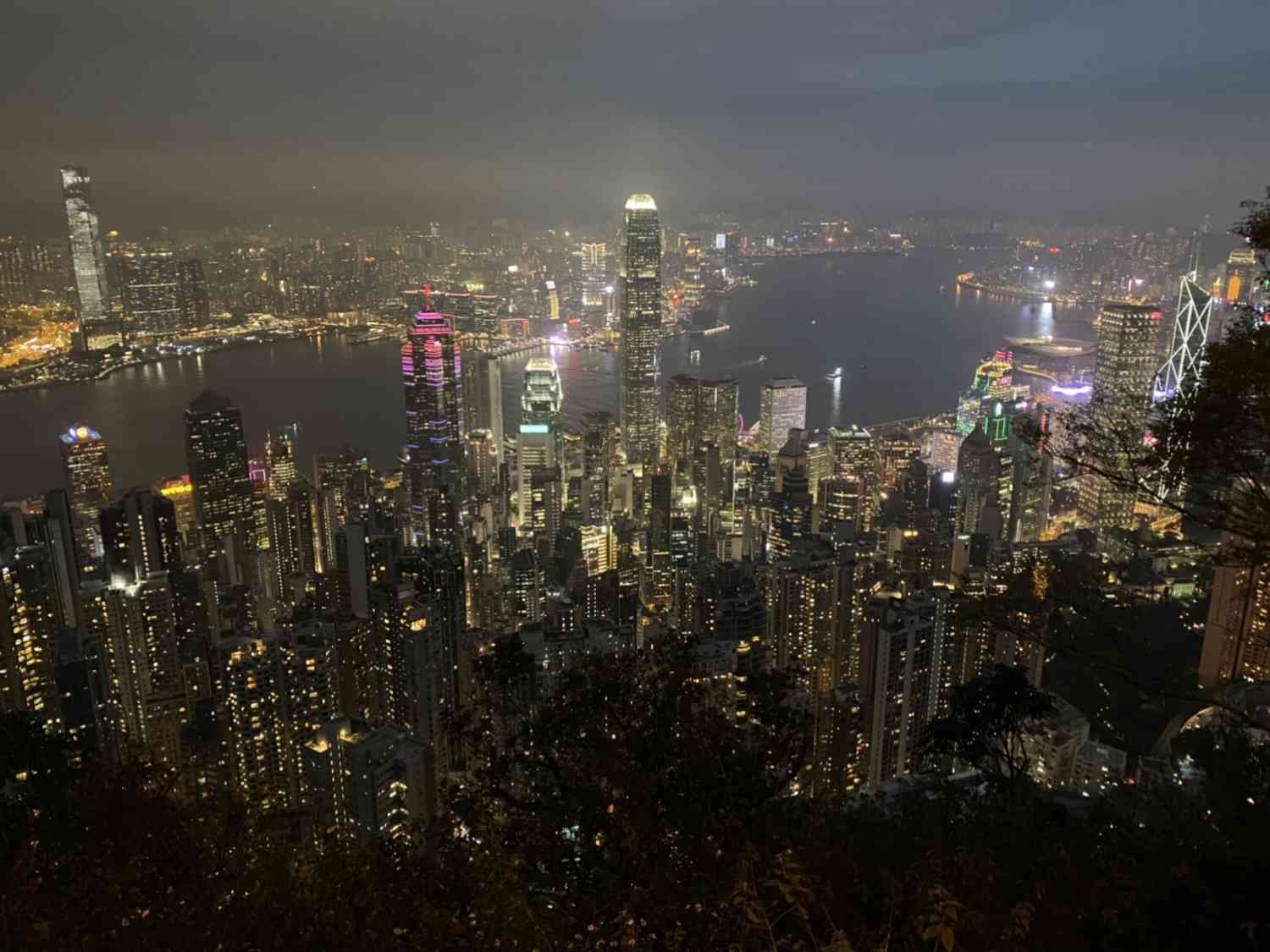 And back to the same old song: how fortunate that we got stuck in Hong Kong! It was truly improbable given that all our time prior to the pandemic was spent on small pacific islands and on ships going between them. Hong Kong was only supposed to have been four days of transit. Think about that in the big picture. And yet we got stuck in Hong Kong. Had we only reached Palau then the odds would have been that you would now be reading about corral, tropical fish, sand and coconuts for the fiftieth time. What makes Hong Kong great for the Saga is how rich it is in opportunity. If my days were spent counting sand grains then the Saga would probably have ended long ago. That has fortunately not been the case. Have no doubt: the pandemic SUCKS!!! And I am by far not the one to suffer the greatest from it. Yet, I’d argue that we are own masters when it comes to making the best out of a bad situation. In Hong Kong my friends and I came together to raise more than USD 10,000 for the Danish Red Cross. Where else within the Saga would we have had the time to do something like that? I could have gained weight and taken an unhealthy liking to alcohol. Instead, I’m a day away from challenging myself with the Goggins Challenge. My goodness I love Hong Kong’s mountains, its beautiful beaches, the well-maintained trails, the waterfalls, the wildlife and all those things which Hong Kong isn’t famous for. The urban life is incredible too. Café’s, restaurants, markets, the skyline, the museums, the bustling districts and hidden gems. Naturally best of all I enjoy the people! 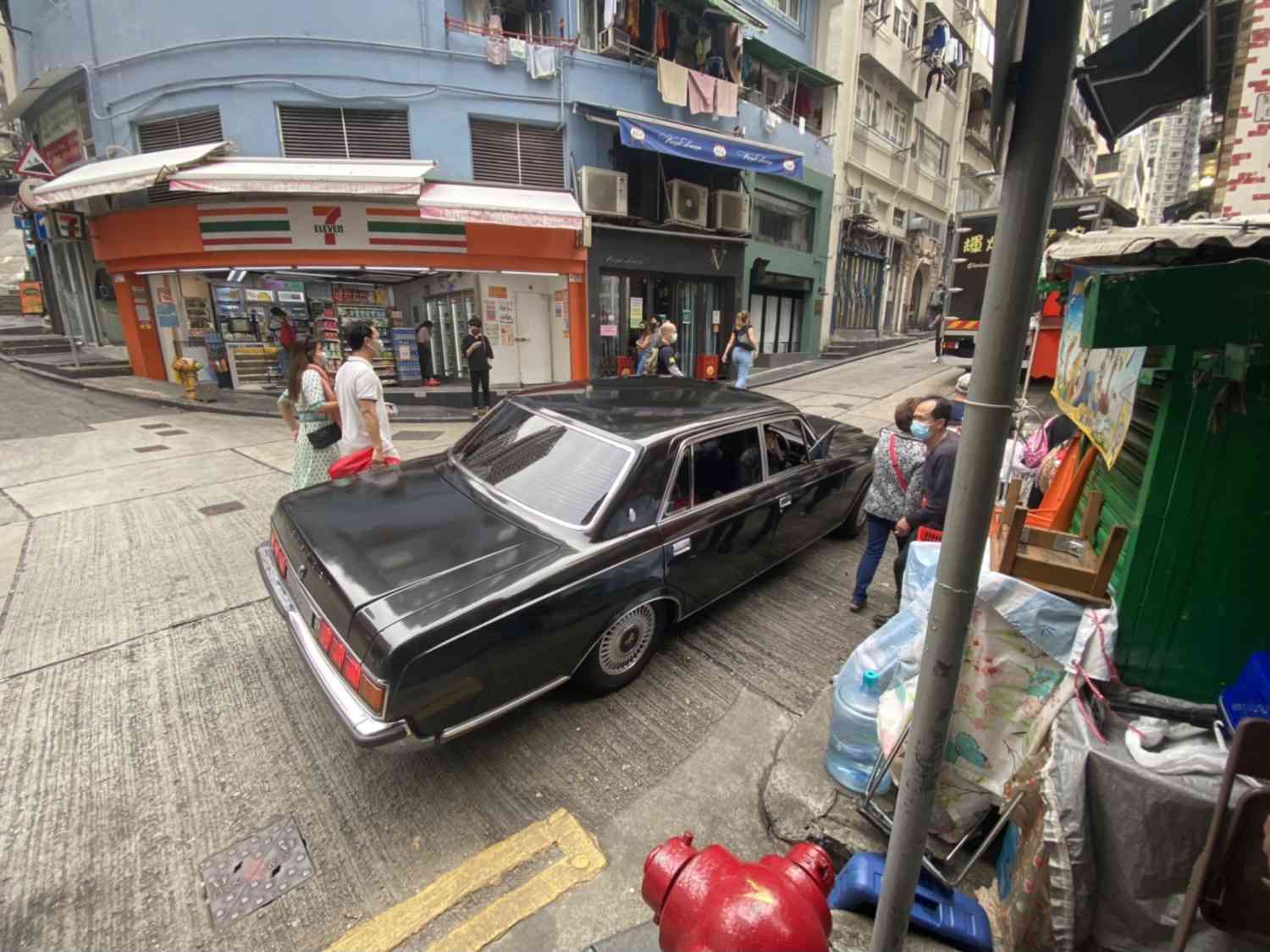 I was hanging out in SoHo with Michael when this thing rolled by.

Hongkongers are cool. The diversity is rich so you’ll have no problem spotting a fashionable young man with a slick haircut, the right shoes and all the swagger in the world. Then look to the other side and see an old woman in traditional clothes smiling at you with all of her two teeth. A tram might just roll by followed by a Tesla. Not everyone speaks English in Hong Kong. In fact, lots of people don’t. But they seem to do their best to help me regardless. Sometimes they shy away because of the language barrier but those occasions are rare and often end with them helping me anyway accompanied by some laughter. I fully comprehend living in a world with an uncertain future. It is hard to say what Hong Kong might look like in a couple of decades. But that would be the case regardless of any political pressure. Keep in mind that the iPhone didn’t arrive until 2007. We live in a world that is constantly changing and most things which do not change die and disappear. Be ready to adapt. We will never return to life as it was in 2019. But hey, some people are living their lives as if it was still the 90s. So, feel free to avoid change if you like. 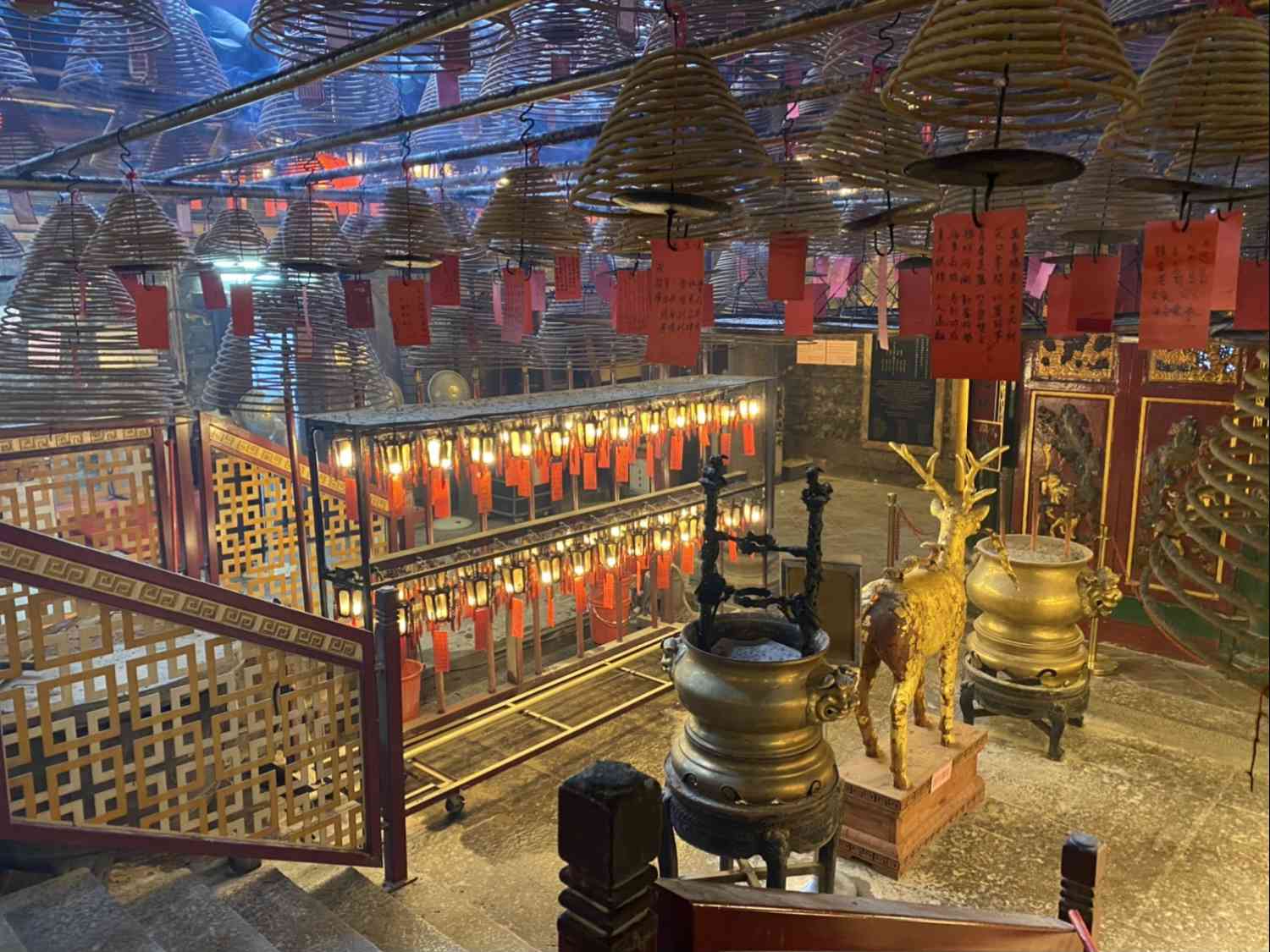 Take a step off the busy streets of Hong Kong Central, and enjoy the tranquil mystique of one of HK's oldest Man Mo Temples.

Holy heck – that’s about it. It has been a busy week but I won’t bore you with the details. There are several new collaborations, a few new interviews will also be coming out soon, some big and some small, I’m servicing a ship today and another one on Monday, for the time being I think I’m done visiting government offices, I’ve been keeping up with friends and training for tomorrows challenge. I’m really curious to see how I’ll handle with the sleep deprivation and physical stress. Stay safe and sane out there! This virus…it too shall pass.

Quarantine day 7: I tested negative for the 2nd time since arriving to #Palau 🇵🇼 I arrived on a ship with 23 vacci… https://t.co/9qrschbW0w

I watched ‘Lincoln’ today and shed a tear towards the end. What a movie 🎥 And upon doing a little research afterw… https://t.co/OVtfryBggH