I have frequently described challenges and problems as a wall which must be passed. A wall with a locked door. “Go and look for more doors” I say. Well, I find myself sitting before the same big door to the Pacific which closed in March 2020. Where are those other doors? I found quite a few – but they are all locked as well.

Last week’s entry: From sweat and pain to luxury | in Hong Kong

My goodness it bugs me still being here in Hong Kong!! Don’t get me wrong. Hong Kong is a fine place and under different circumstances I would be thrilled and in peace being here. And in many ways, I am grateful to be in Hong Kong during the pandemic. But come on!!! Four hundred and seventy-two days later and we are still nine countries from completing a now 7 years, 7 months and 4 days old effort in trying to pull off mission impossible. Am I motivated? Am I stubborn? Am I determined? This year is different they say. We have vaccines now they say. “They” say so many things. Wifey and I have been fully vaccinated for a while and I struggle to see any benefits. It is the socially responsible thing to do of course and that should be enough for anyone. But people are just people and people are selfish: “what is in it for me?” Less than 10% of Hongkongers have had both jabs in spite of the vaccine being both available and free. That is an epic distance from reaching heard immunity. Why is there so little incentive from government? Fear has had time to grow among the population and people seek excuses not to get the jab. According to a survey in the South China Morning Post I could read that 78% of Hongkongers are reluctant due to concerns over vaccine safety and potential side effects. 67% worry about serious side effects or even death. If those were my concerns then I would also avoid the jabs!! But those were not my concerns. I had no concerns at all. In the same article I could read that the death rate among those inoculated from April 12 to May 9 (one month) was 0.16 per 10,000 people, whereas it was 4.67 among the non-inoculated. That sounds convincingly in favor of getting vaccinated right up until the point where you think a bit about those numbers? Hmmm…”the non-inoculated” – do they include every type of death regardless of the virus? Because Hong Kong has “only” had 210 COVID-19 related deaths throughout the pandemic and 4.67 per 10,000 people must be around 3,500 people in a population of 7.5 million? Apples and oranges. Well, what can you do…there is hardly any COVID-19 within the Special Administrative Region of Hong Kong…the fragrant harbour, Asia's World City, the Pearl of the Orient… 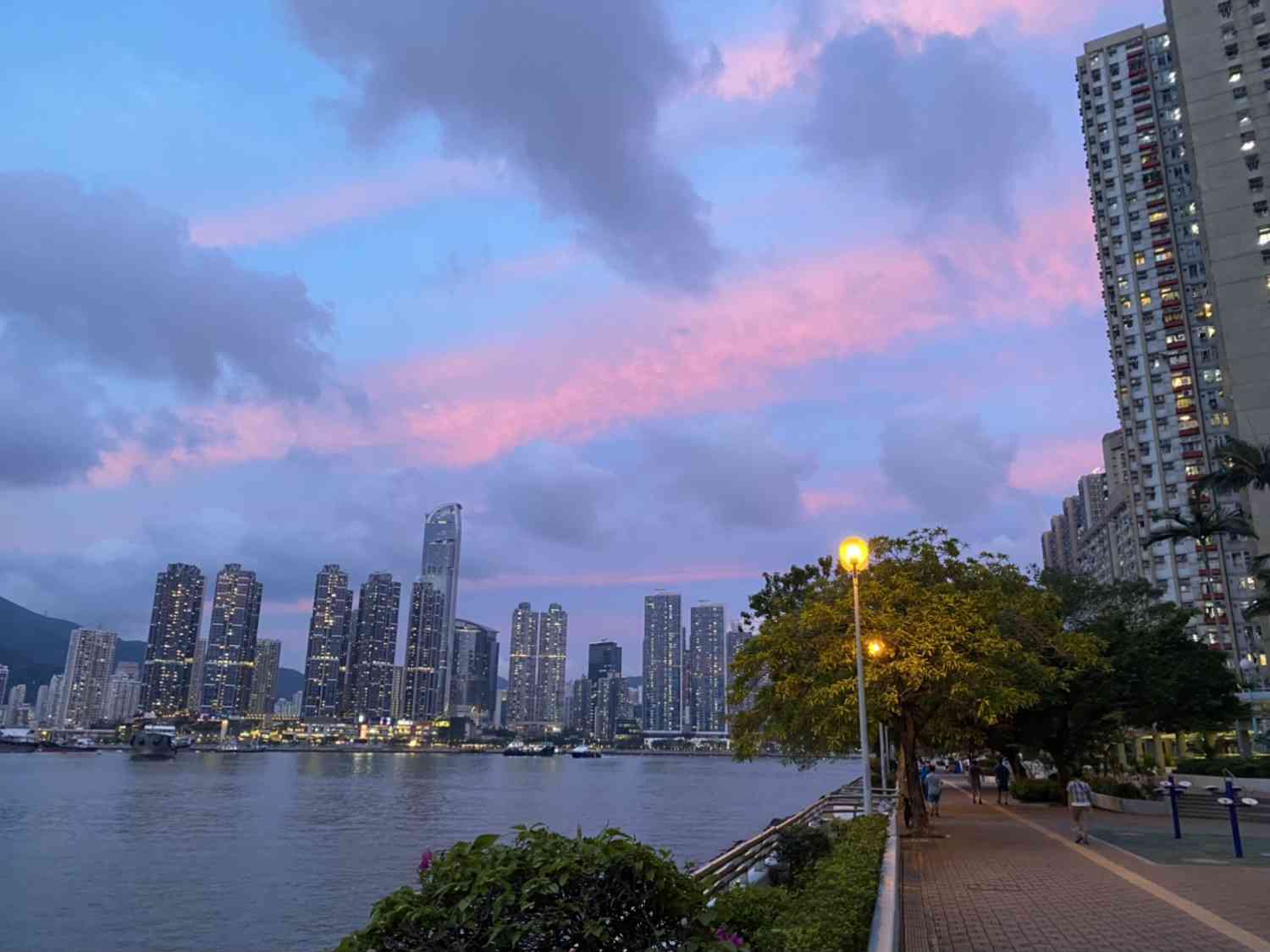 The weekly 'Thursday Urban Hike' with friends is a favorite of mine in Hong Kong.

A friend of mine had to leave Hong Kong to go and see family. On reentry he was to be faced with three weeks of quarantine according to Hong Kong’s rather tight COVID-19 restrictions. Fortunately for him a little incentive has been given towards those with both jabs: as he returns to Hong Kong he will “only” face two weeks of hotel quarantine. And there are a few other incentives here and there in terms of dining at restaurants where you in some cases can be seated six or eight together if you have been vaccinated and possibly also stay out later. However, all in all no real incentive in a world driven primarily by incentive. That big door to the Pacific! When will it unlock? How much fight do I have left within me? 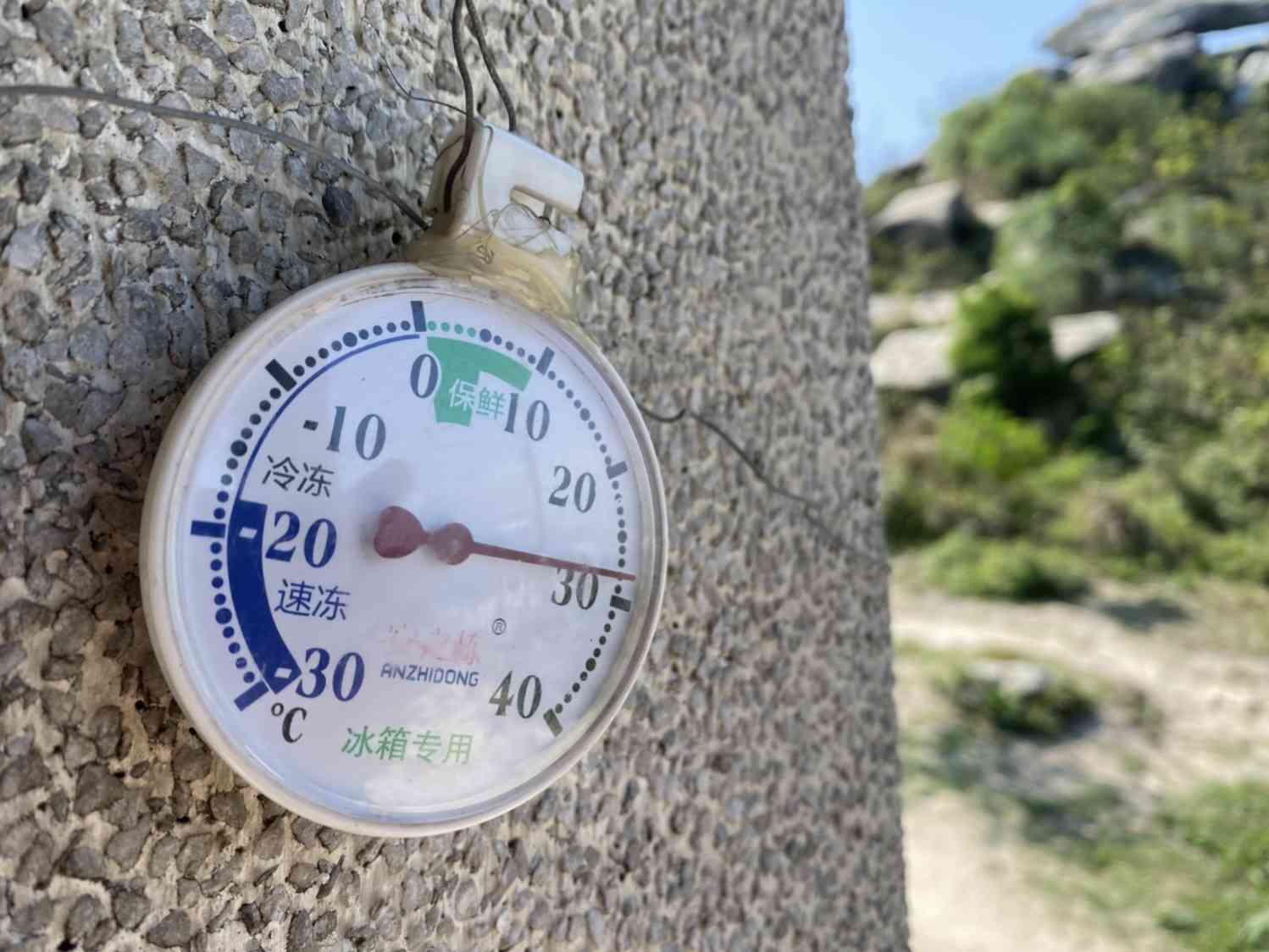 Temperatures are rising and we've had a few black thunderstorm warnings.

Listening to the BBC World News every day is hardly uplifting. Listening to any news rarely is. Bad news travels fast. Sometimes I think my greatest personal benefit from visiting all of these countries on a small budget without flying has been to meet so many people and discover that it’s really quite normal and mundane out there. The Jews and the Arabs are at it again as Israelis and Palestinians battle it out once more. “The eternal conflict”. I wonder if my grandchildren will be reading about regional clashes between them? I wonder if I’ll have grandchildren? Fortunately, I have been to both Israel and Palestine and know for a fact that they are both people. They love their families, they care about sports, food, music and they discuss the weather. The conflict itself…well, it is by a lack of a better word tremendously complicated. And Myanmar…oh how I enjoyed the serenity of that nation as the Saga entered across the border from India. Life became easy, the food was oh so good, chopsticks, smiling faces, a lush landscape, kind people, Buddhism…I’m sorry to hear about the suffering today. Naturally not everyone is suffering….but some are. Some are dead. And India!! Oh India you great an magnificent nation!! Incredible India!! Great country – great people! COVID-19 certainly got its grip on India now! It is such a large country filled with an immense diversity. Rich and poor. I recently spoke with the founder of LittleBigHelp who’s a fellow Dane that got invested in helping people in India’s slum areas. I have found that much of LittleBigHelp’s work mirrors the good humanitarian work of the Red Cross and Red Crescent around the world. But although the Red Cross is the world’s largest humanitarian organization it simply cannot reach everyone. That is why I’m so happy to hear that Lisbeth Johansen founded LittleBigHelp and is doing her part. Most people talk about doing stuff and never get down to business. This is a well-founded case of making a big difference to some of the most vulnerable lives in West Bengal. And on May 30th there’s a charity run which I have signed up for and I invite you to do the same. There’s a small entry fee (USD 15) and the money raised goes to help those who need it the most. You can sign up for the ‘Once Upon A Saga’ team if you want and walk or run the 10km (6.2mi). There are other distances as well. Sign up and represent your country! :) 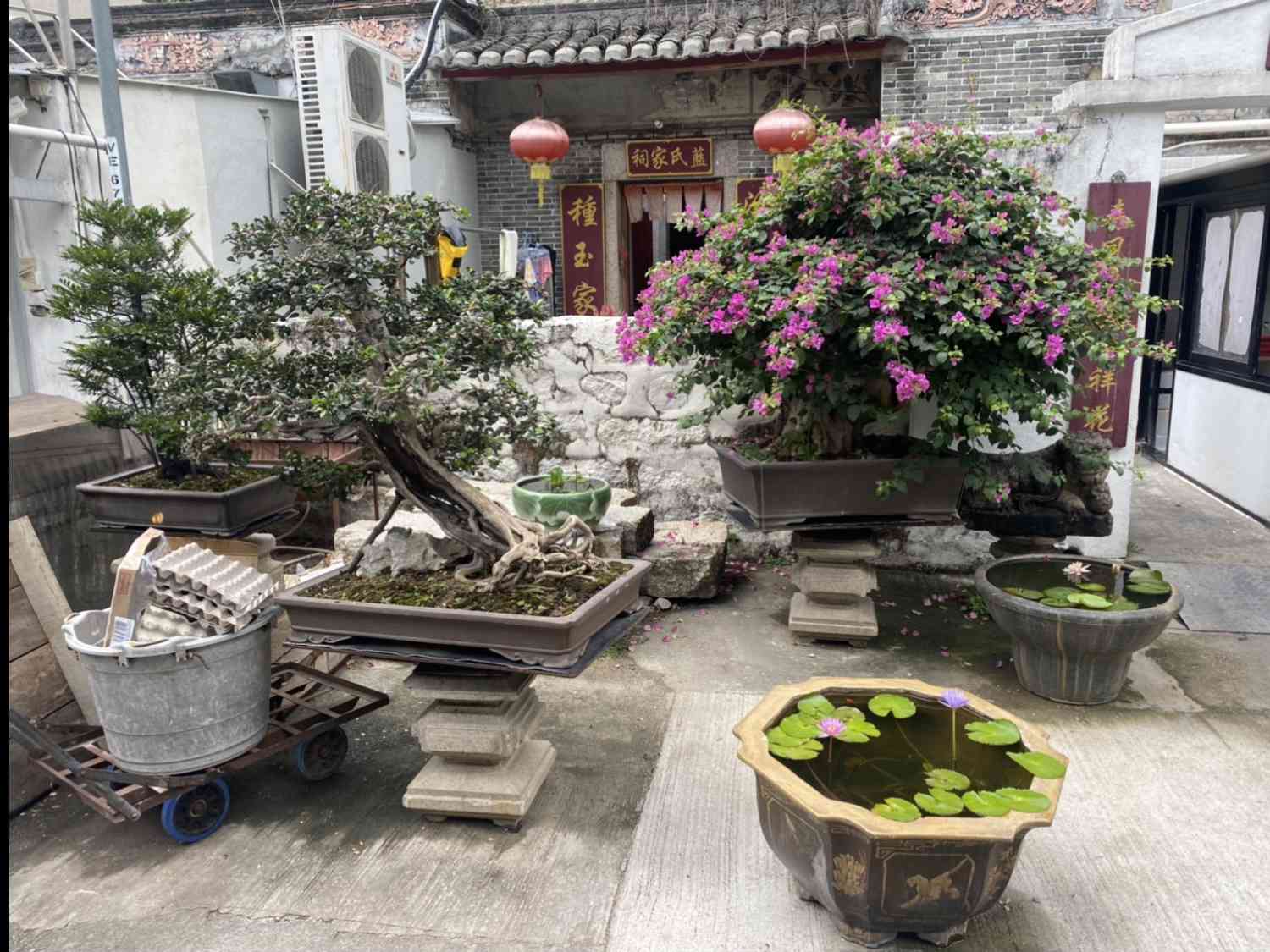 A quote has over the years become very dear to me. It is from J.R.R. Tolkien’s book ‘The Fellowship of the Ring’ and it goes like this: “I feel thin, sort of stretched, like butter scraped over too much bread.” I feel like that. I’m fully aware that the social media of Once Upon A Saga doesn’t reflect the reality of what I endure throughout this project. The social media reflects snapshots and often something fun, interesting or downright glamorous. I probably get more done on an average week than the average person does and when I’m busy – I’m truly busy. Once Upon A Saga has been a nonstop ordeal for nearly a fifth of my life now. My goodness. I look into the mirror once in a while and wonder if I’m mad! Have I made the correct life choices? Should I quit? What will we win from completing this project and what will I lose? We have come so far and yet we still have so far to go. Nine countries left will require no less than ten months. It sounds absurd but that is the nature of things. Gunnar Garfors from Norway managed to visit 19 countries within a single day and yet we need ten months for nine under the best of circumstances. Not the same nations though. 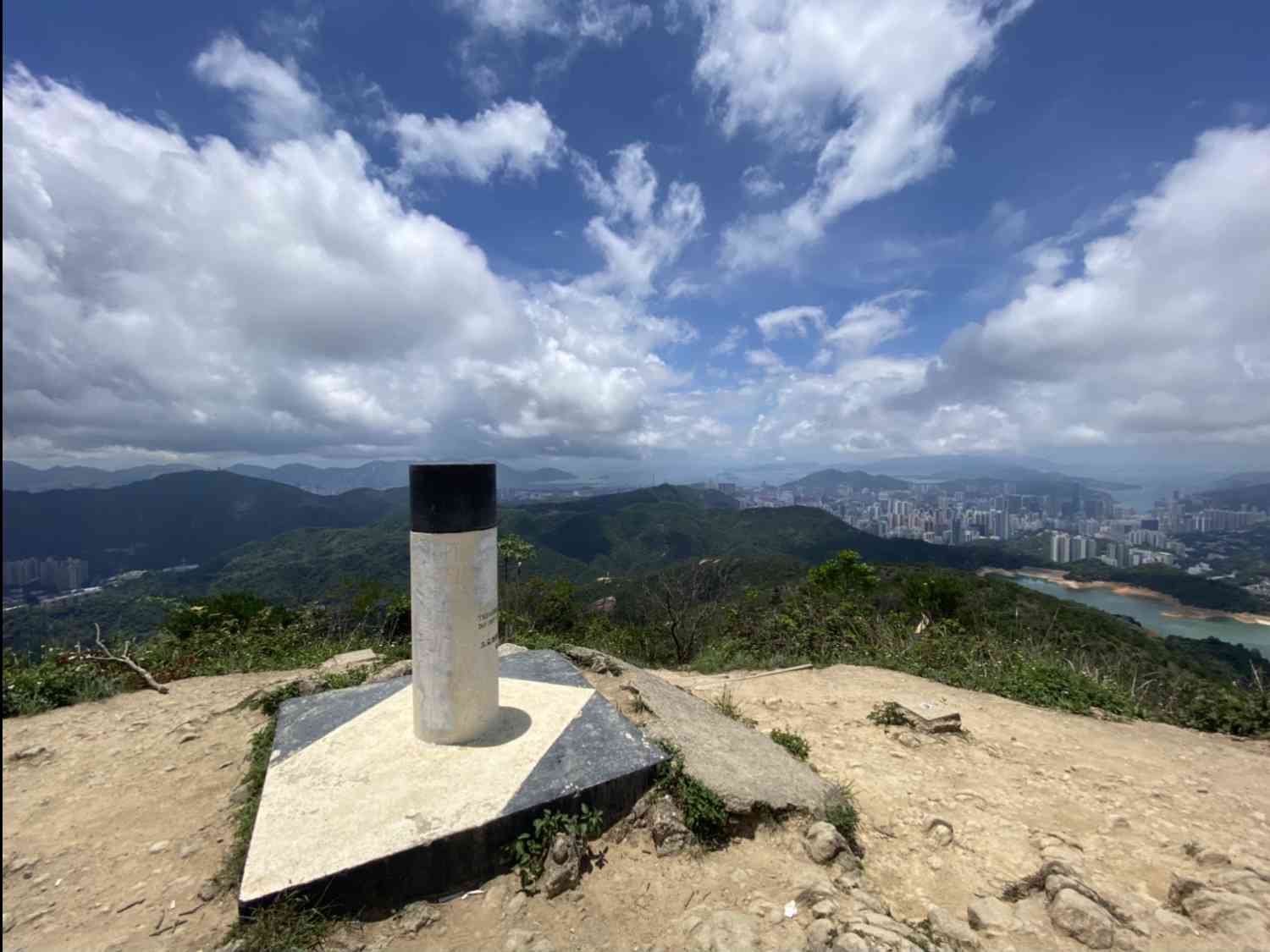 The view from Needle Hill on a beautiful day.

On June 20th next month my lovely wife aka Le aka wifey will board an airplane and return home to Denmark. We do not know when we will get the chance to see each other again. Prior to her arrival in Hong Kong, we had not seen each other for nineteen months! I may have a shot at getting to Palau soon but with no exit strategy. Getting to Palau would mean a country less while getting a country closer to home. Palau is an astonishing beautiful country and a prized holiday destination. But as the Jamaican woman within the movie ‘Meet Joe Black’ said: “Like you come to the island and had a holiday. Sun didn't burn you red-red, just brown. You sleep, and no mosquito eat you. But the truth is, it bound to happen... if you stay long enough. So take that nice picture you got in your head home with you, but don't be fooled. We lonely here mostly too. If we lucky, maybe... we got some nice pictures to take with us.” What a trade Palau would be for Hong Kong!! Beautiful and fresh to begin with. Progress! But soon enough the mosquitos will get me and the sun will burn me “red-red”. Yet…we might make that trade when wifey leaves. 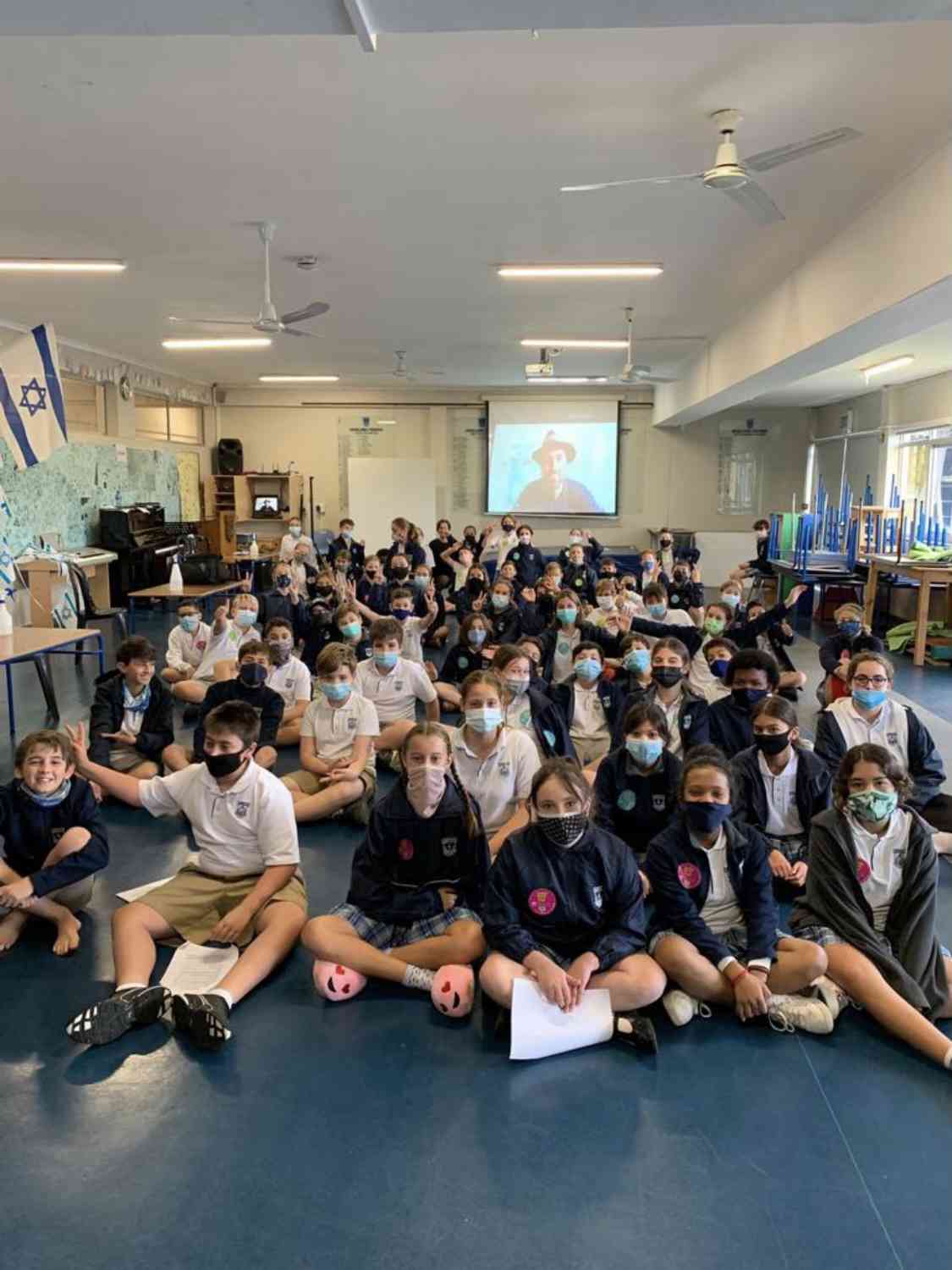 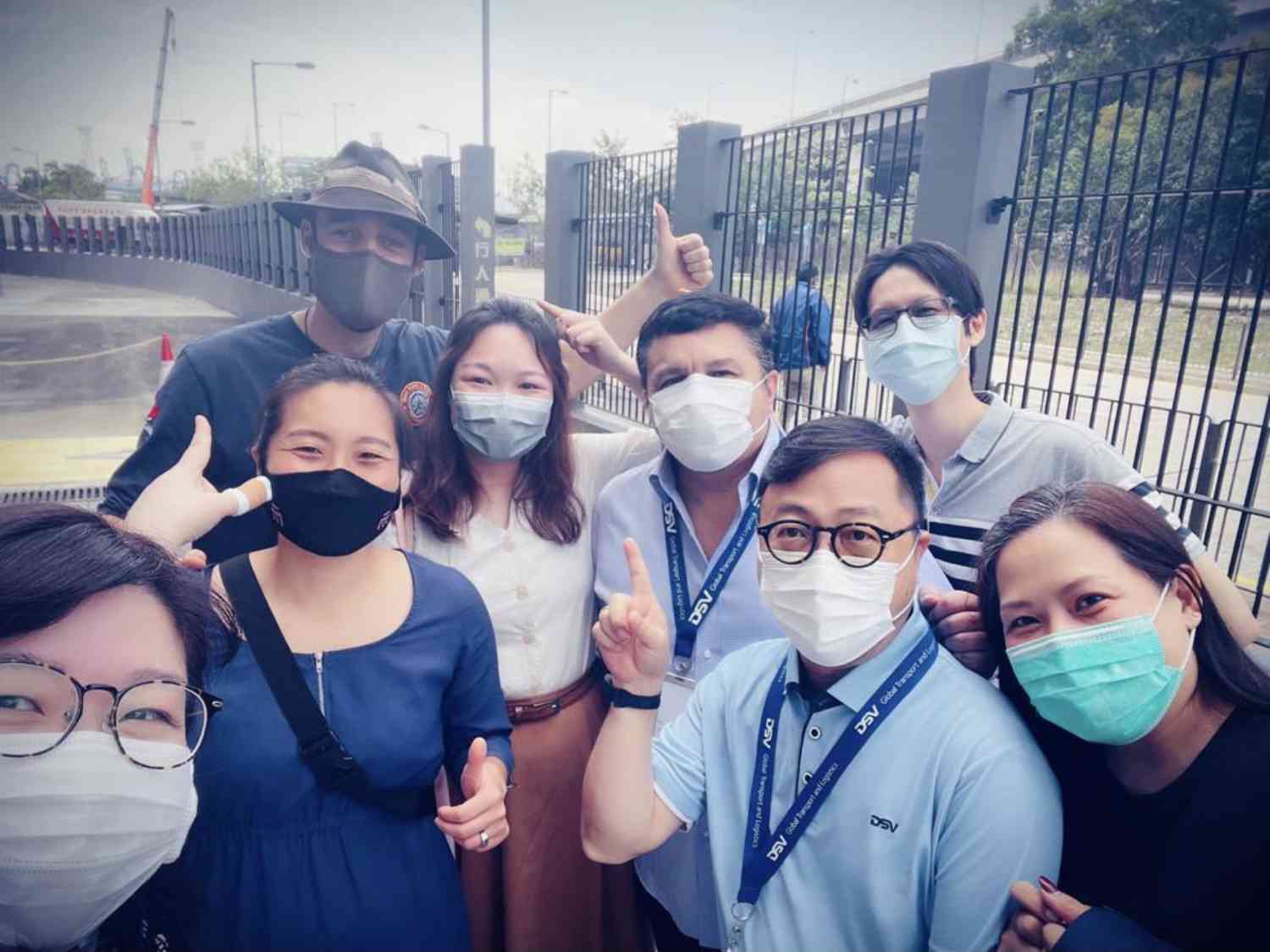 Sometimes happiness is having lunch and sharing stories with this fun team from DSV in Hong Kong. 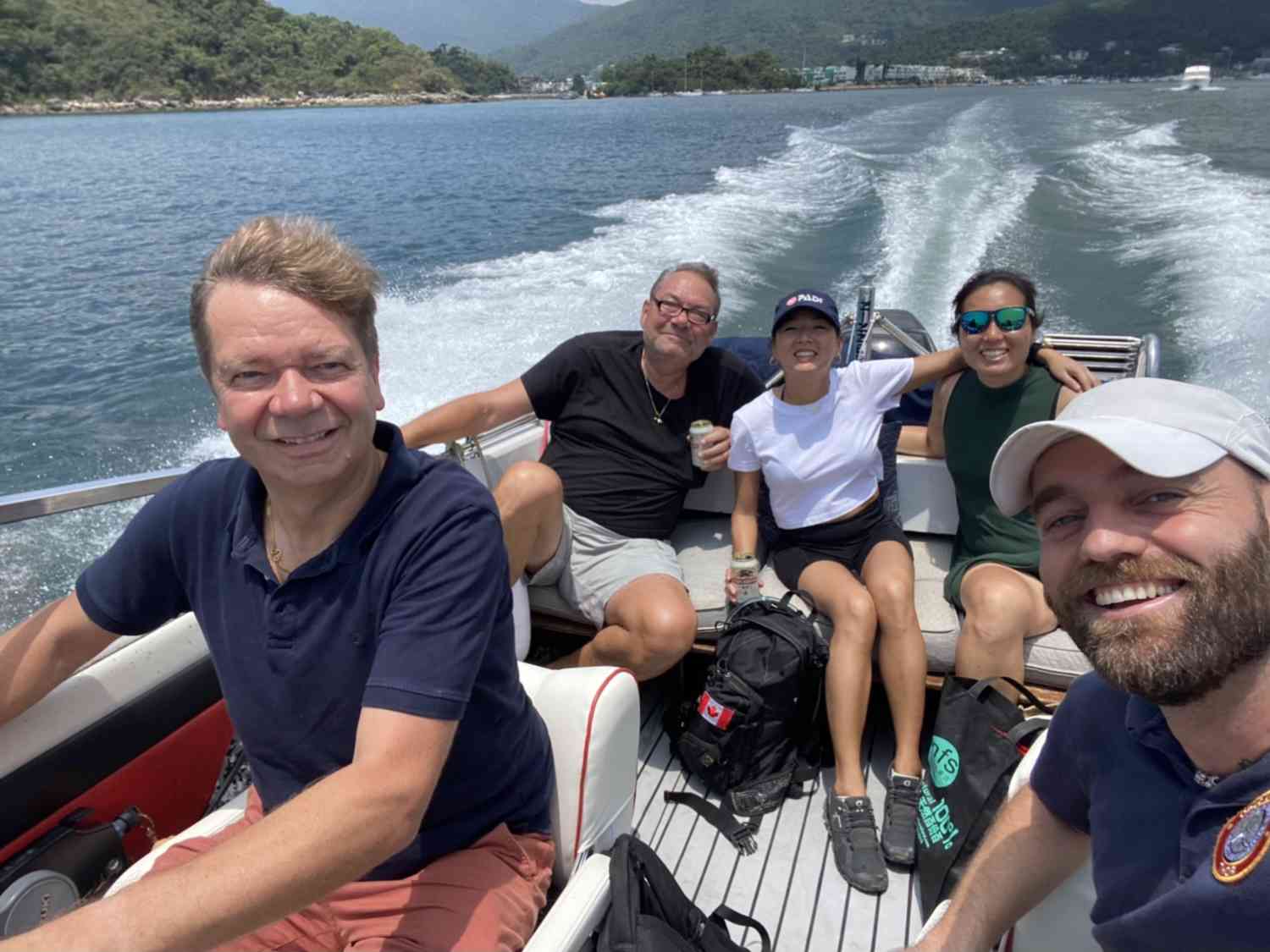 Sometimes happiness is going on a boat trip with friends. 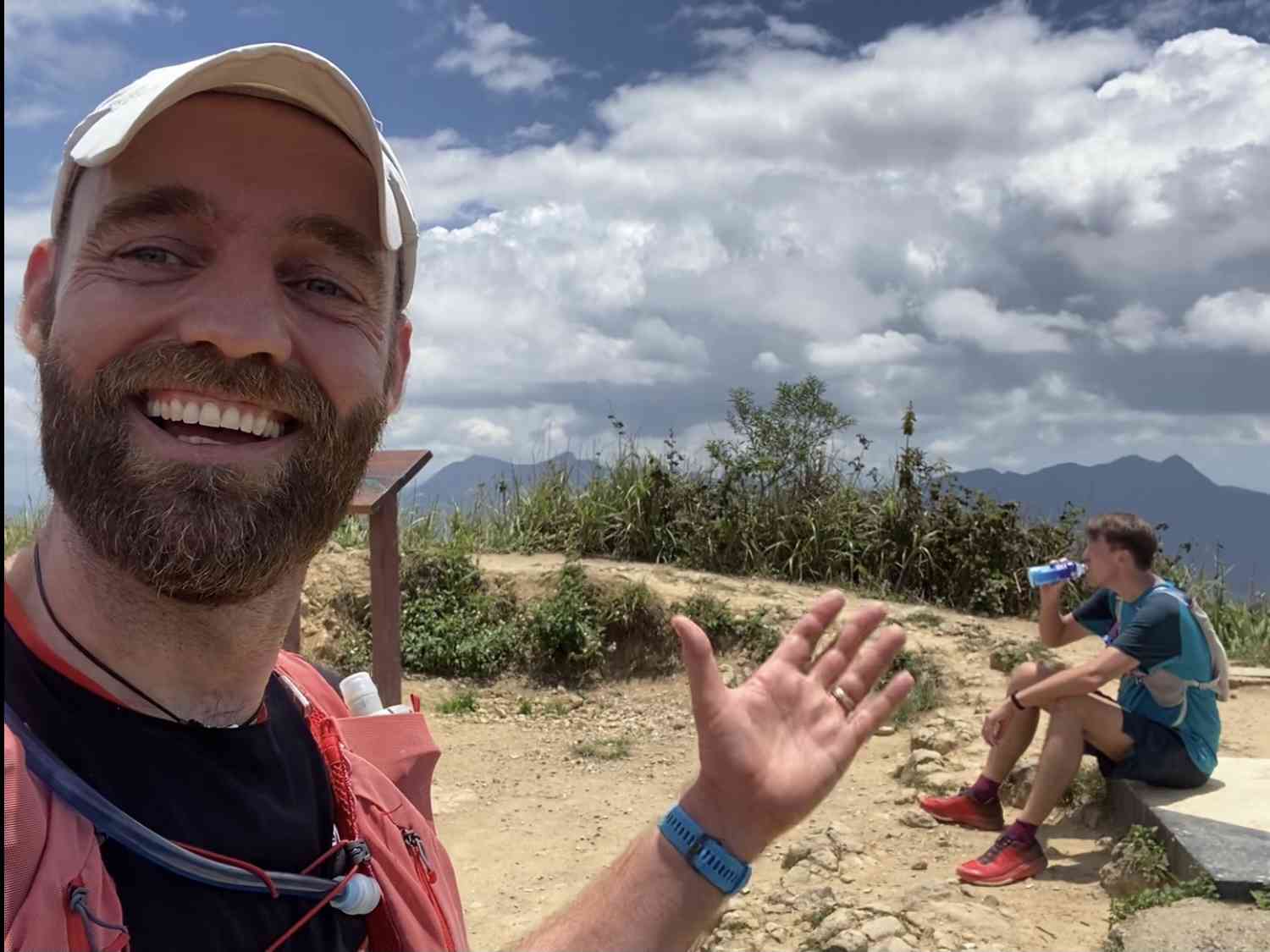 Sometimes happiness is enjoying nature with a good friend. 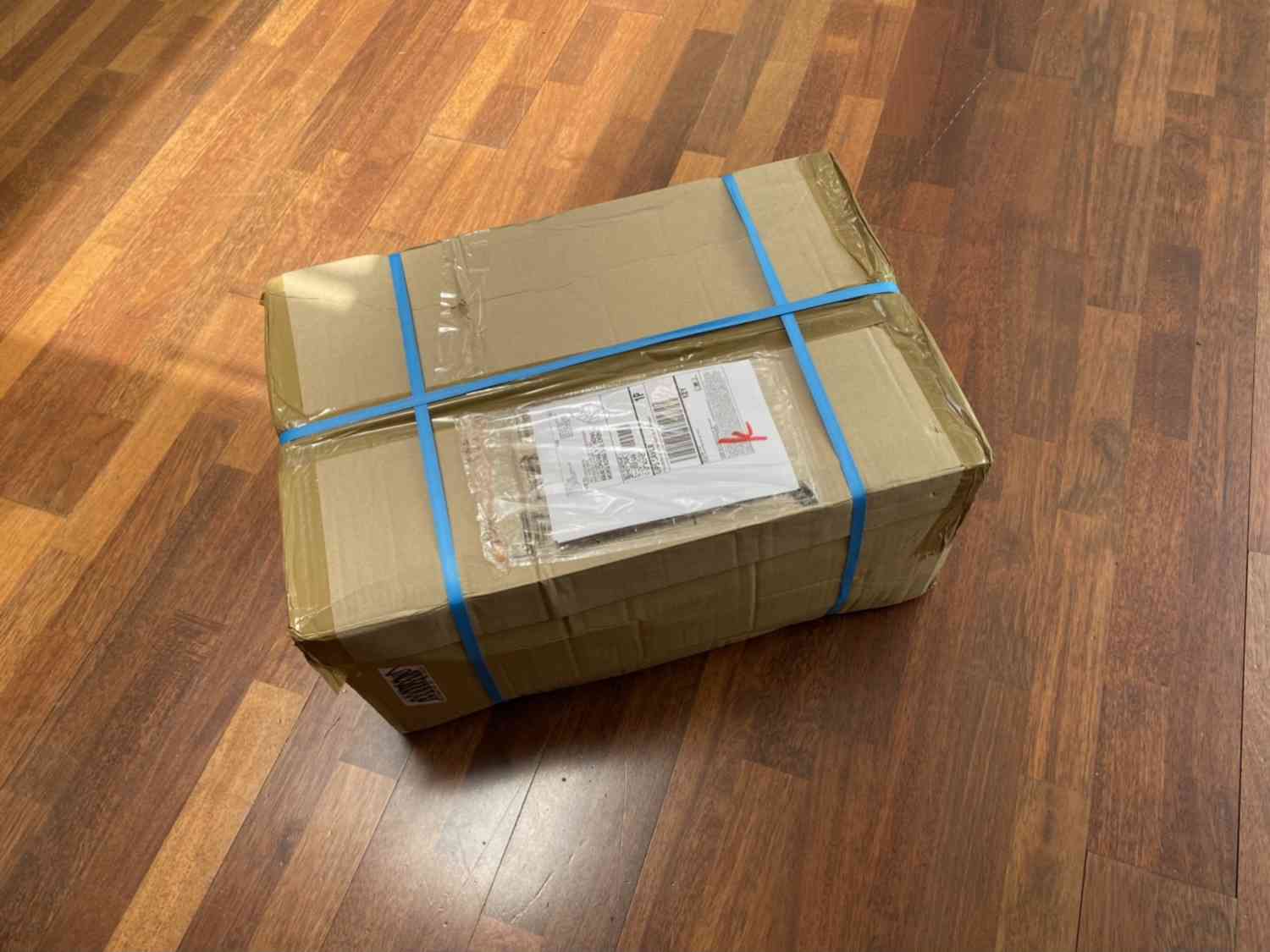 Sometimes happiness is getting a box full of new Salomon gear from France! 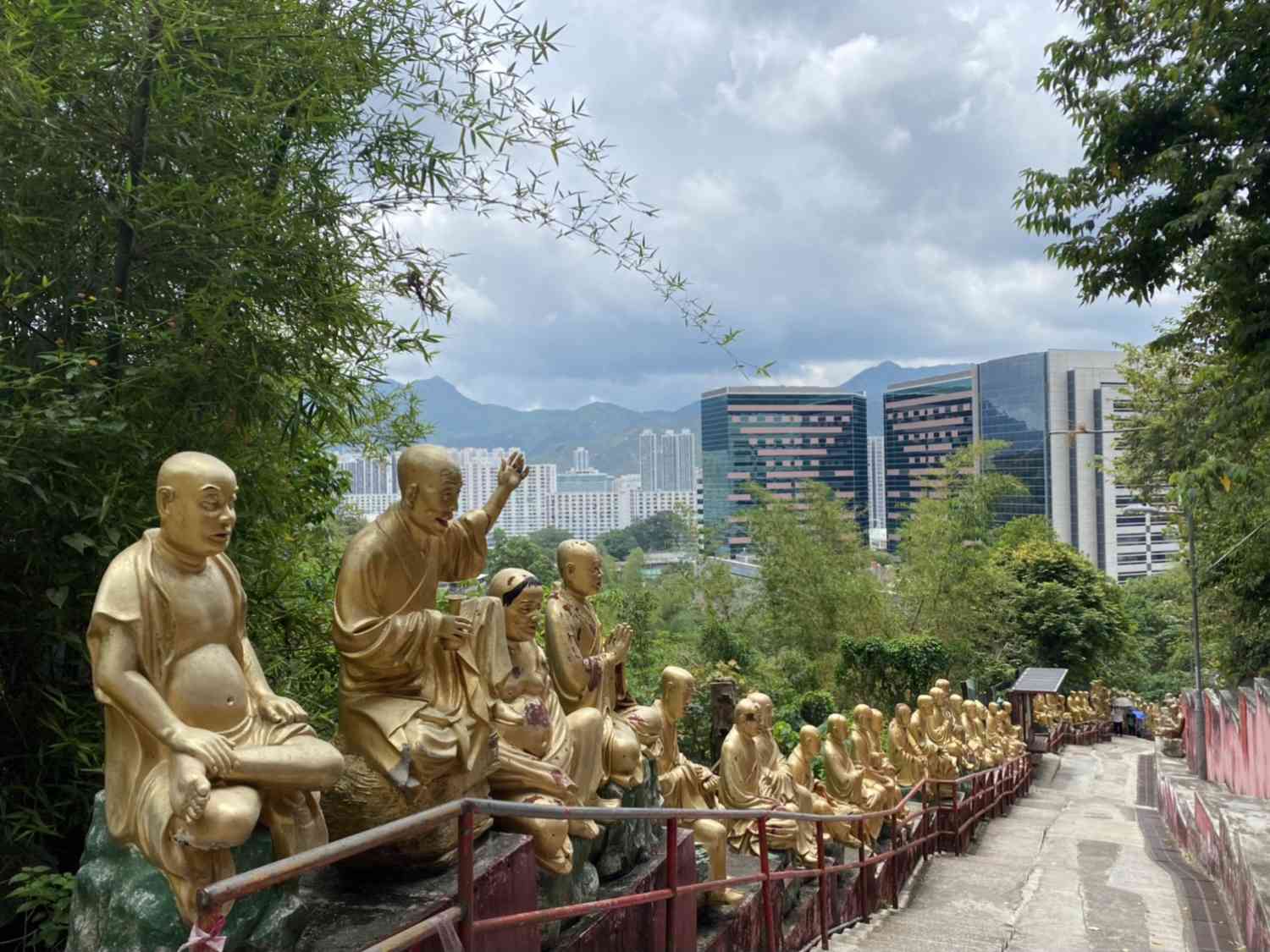 Sometimes happiness is visiting the 10,000 Buddhas Monastery with wifey. 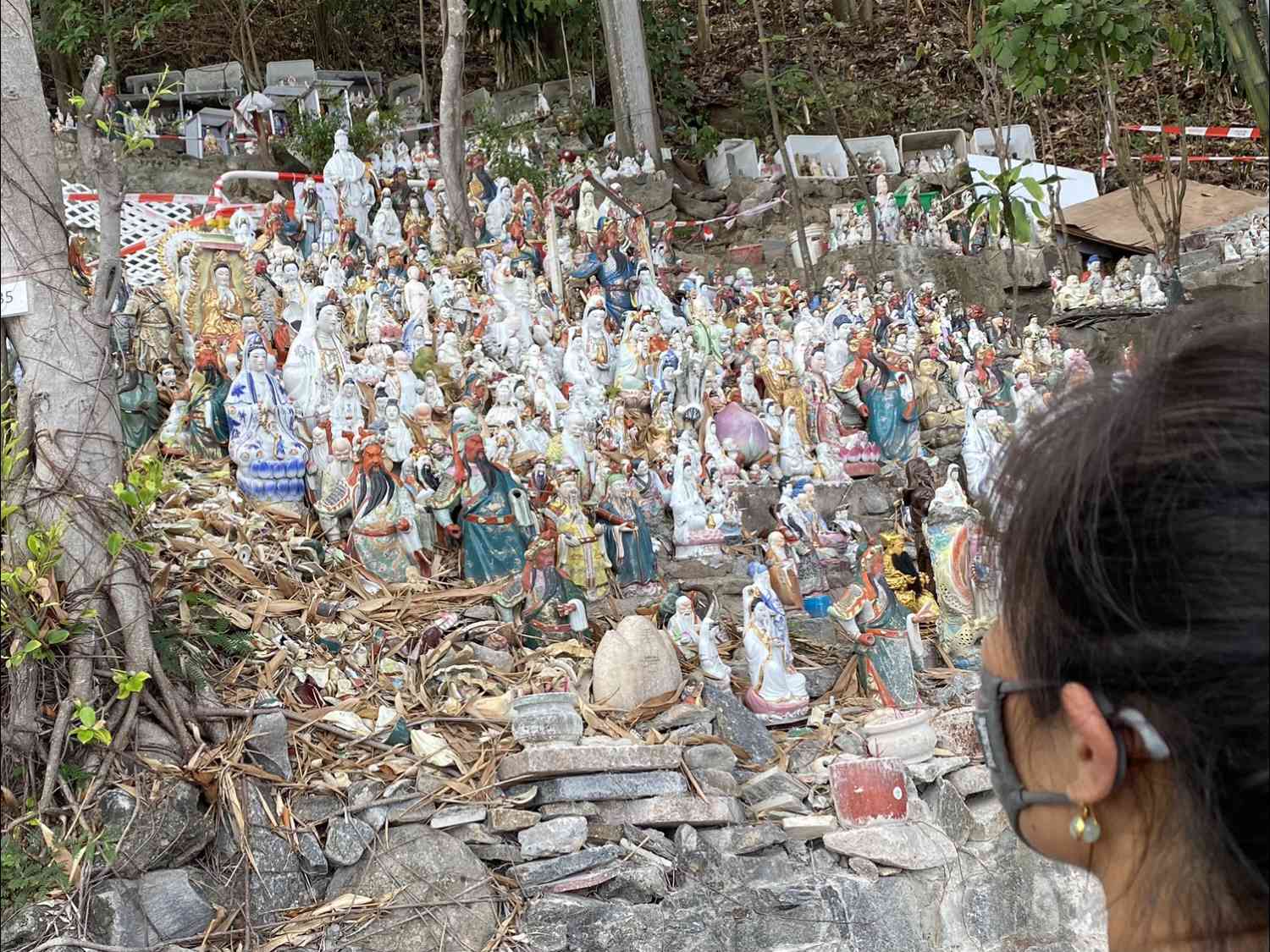 Sometimes happiness is visiting "A sky full of Gods and Buddhas" with a loved one. That place was a lot better kept a year ago when I first visited! Time flies - I don't. 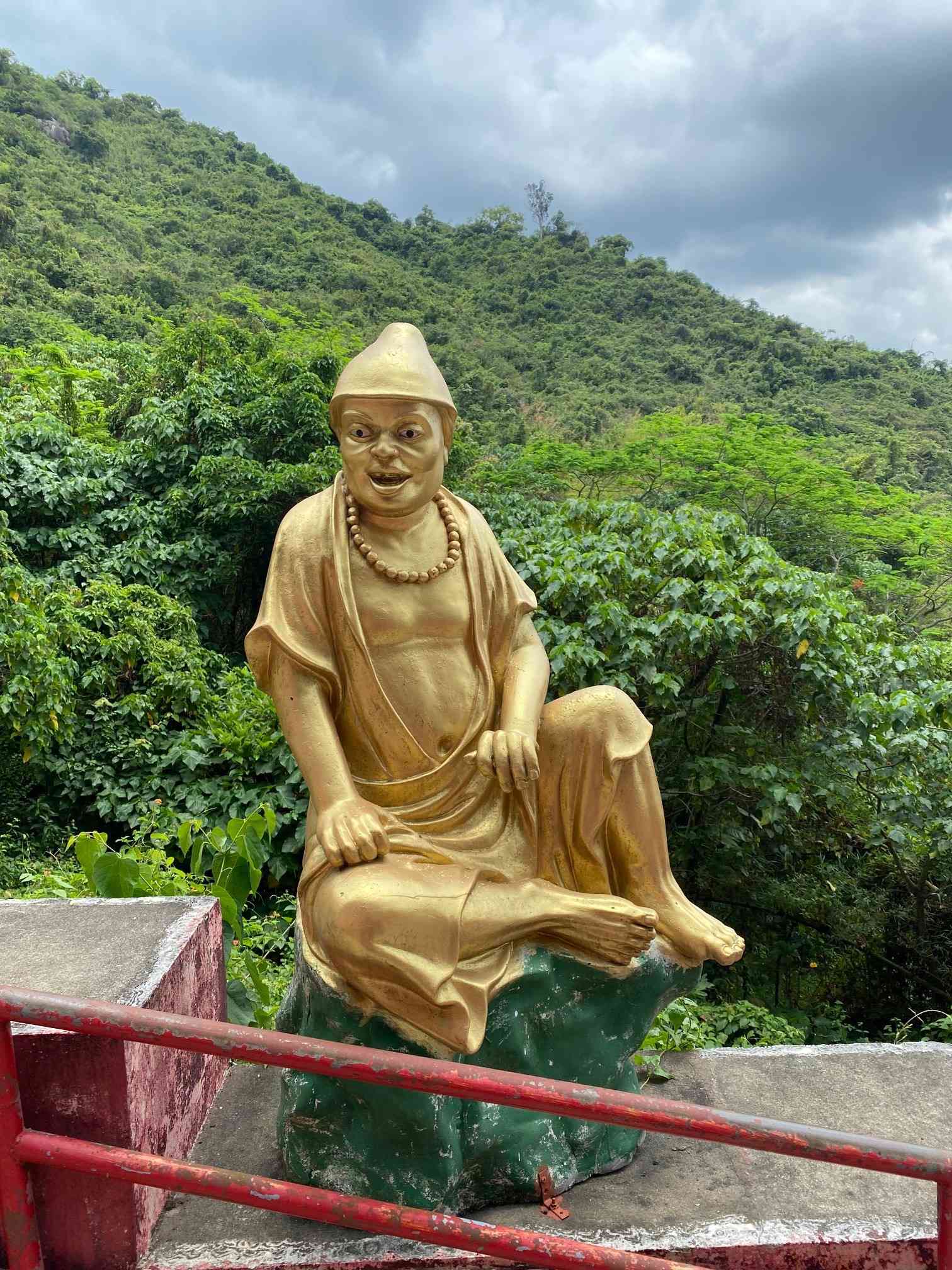 But happiness is volatile. One minute you smile and the next you stare emotionless into the horizon. Sometimes I wish I was a fool on a hill "with a foolish grin".