Let it burn!! (from Hong Kong)

It has now been eight years since I left home. So, there’s that. But, there’s also the story of the HK Hot Wings Experience, a twisted ankle, a few typhoons and good news regarding Palau.

Let’s start off with my ankle. I have quietly been training for the HK50 race which was supposed to take place last Sunday. It’s a 50km (31mi) trail run with a 2,212m (7,257ft) elevation gain. The cut-off is set at ten hours. I was hoping that I would be on a ship heading towards Palau long before the race date – but obviously Sunday came and went with me still in Hong Kong. Last Friday (two days before the race) I was walking down some stairs when I suddenly lost one second of my life. It is hard to explain. It felt like a system reboot. Everything went black for a second or less and the next thing I knew was that I had missed two steps on the staircase and my right foot was coming down at a twisted angle with my full bodyweight on top of it. I heard a sound akin to when crushing a plastic cup and then felt the immediate pain. What the heck happened? I was on my way out of the building to go and get a PCR test some ten minutes walking distance from where I live. Could I still step on my foot? Yeah. It felt a little weird but not painful. So, I kept going while wondering about what had really happened? I was in and out of the test center in just a couple of minutes and then made the walk back. After taking my shoes off I decided to rest for a bit and laid down in my bed. I took my socks off and noticed my ankle was swollen. Darn it! Two days to the race. Now what. 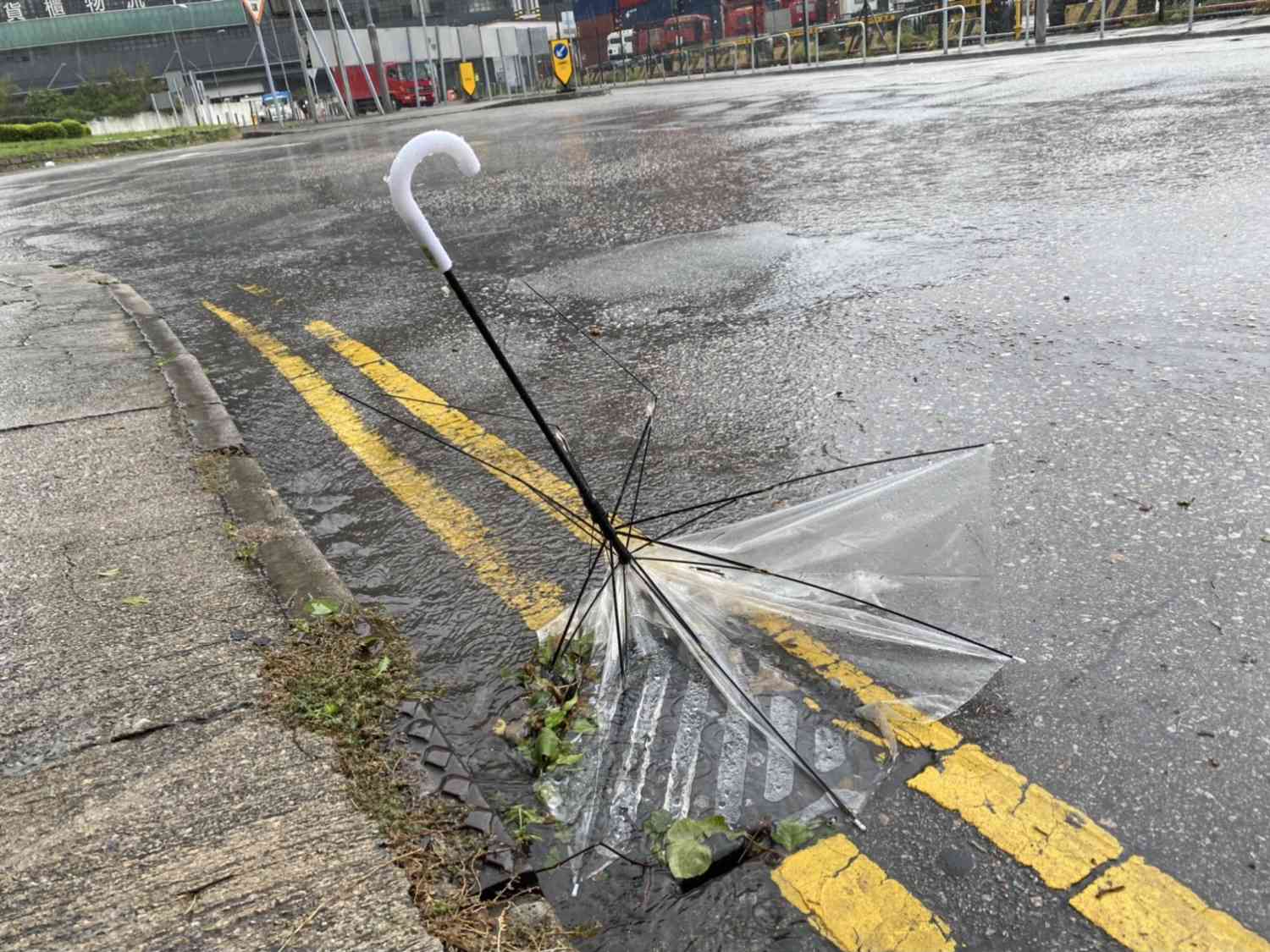 While I probably could have made it through the race on my slightly injured ankle, I also knew that the race wasn’t going to make things better. Could it possibly cause a long-lasting injury? Well, that weekend we had a lot of rain in Hong Kong and the race organizers eventually cancelled the event and moved it 13 days into the future to the scheduled backup date. It has been a week now since I twisted my ankle and it’s still not well. Even a bit swollen. But I have been out for a run and it went well so I think I’ll dare the race if I’m still here on October 23rd. I’m guessing I am but more about that in a moment. The hard rain here in Hong Kong wasn’t a coincidence. Typhoons have been whizzing by left and right lately. We haven’t taken a direct hit though so we were "only" left with occasional wind and a few rainstorms. Hong Kong is truly fascinating! While certain areas quickly got flooded it took very little time for the water to recede. The urban underground drainage system here is world class!! Well, a few days later another typhoon formed east of the Philippines. And much like the previous one it headed north, capped the top of the Philippines, turned left (away from Hong Kong) and continued to Vietnam, Laos and Thailand. Hong Kong partially shuts down during such instances and the government warns people to stay inside. But Hong Kong is home to 7.5 million beating hearts so you always have some people out and about. 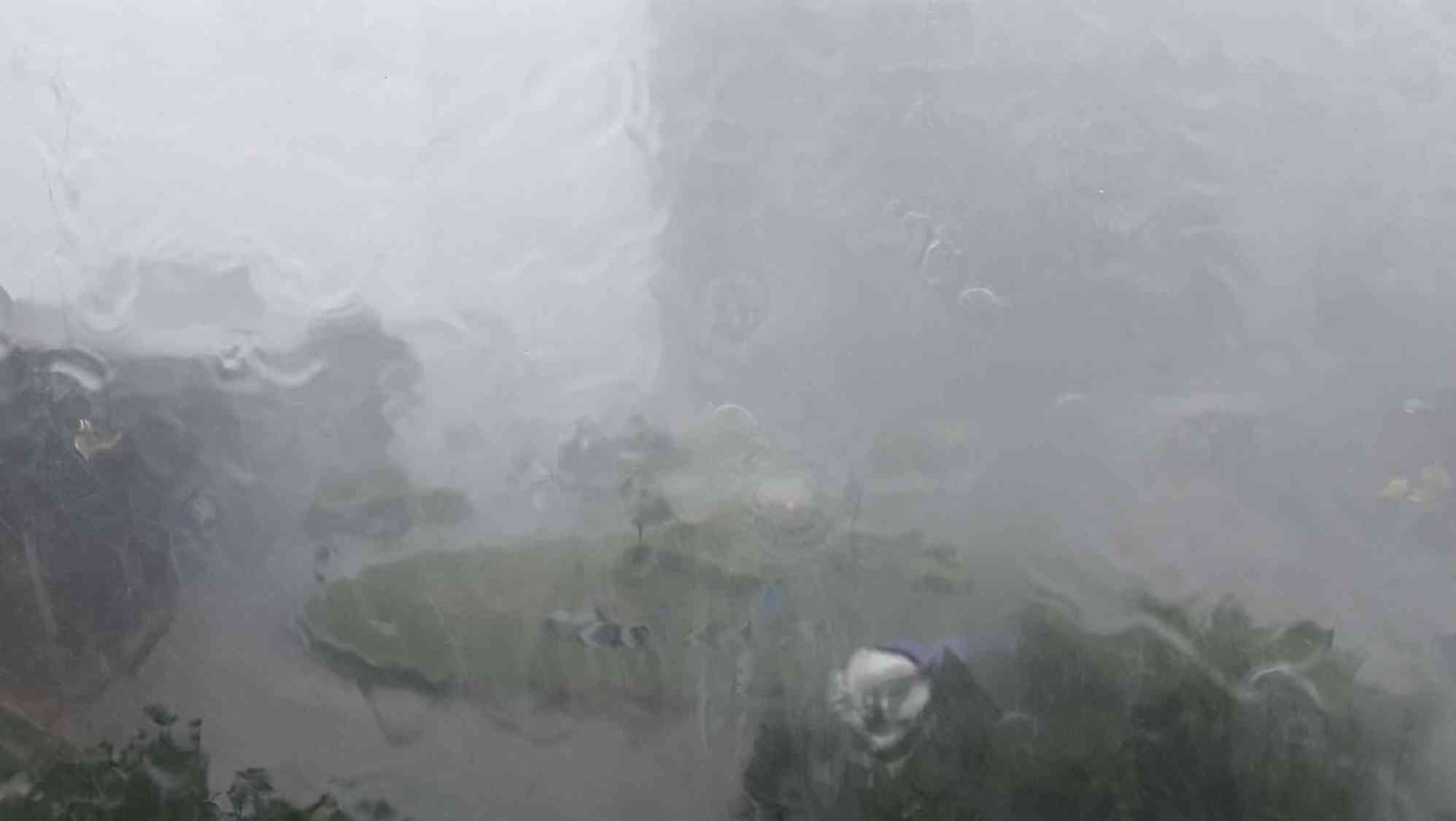 Hard to tell if there's anyone out there when it rains this hard!

The HK Hot Wings Experience was a massive success!! And what an experience to sit down among friends and devour ten spicy chicken wings, gradually getting more and more spicy until the last one. We have all tried spicy food at some point. Maybe you love it and maybe you don’t. But what would it be like to bite into some of the spiciest hot sauce known to mankind? Aren’t you just a bit curious? I certainly was! We got the hot sauces from Fiyah Heat Store in Hong Kong. Eight of them turned out to be from the USA, one was from Canada and one was from Dublin in Ireland of all places. The twelve contenders were: Amy (Hong Kong), Poul (Denmark), Christian (Denmark), Kai (Thailand), Jakob (Denmark), Jesper (Denmark), Rose (Hong Kong), Kenneth (Denmark), Louise (Denmark), Luis (Hong Kong), Thomas (Hong Kong) and myself. We had a bunch of spectators too: Margith, Hans, Jessi, Frank, Camilla, Sofie and Anton. Denmark is known for the concept of “hygge” which essentially means creating a warm atmosphere and enjoying the good things in life with good people. And we certainly enjoyed that! 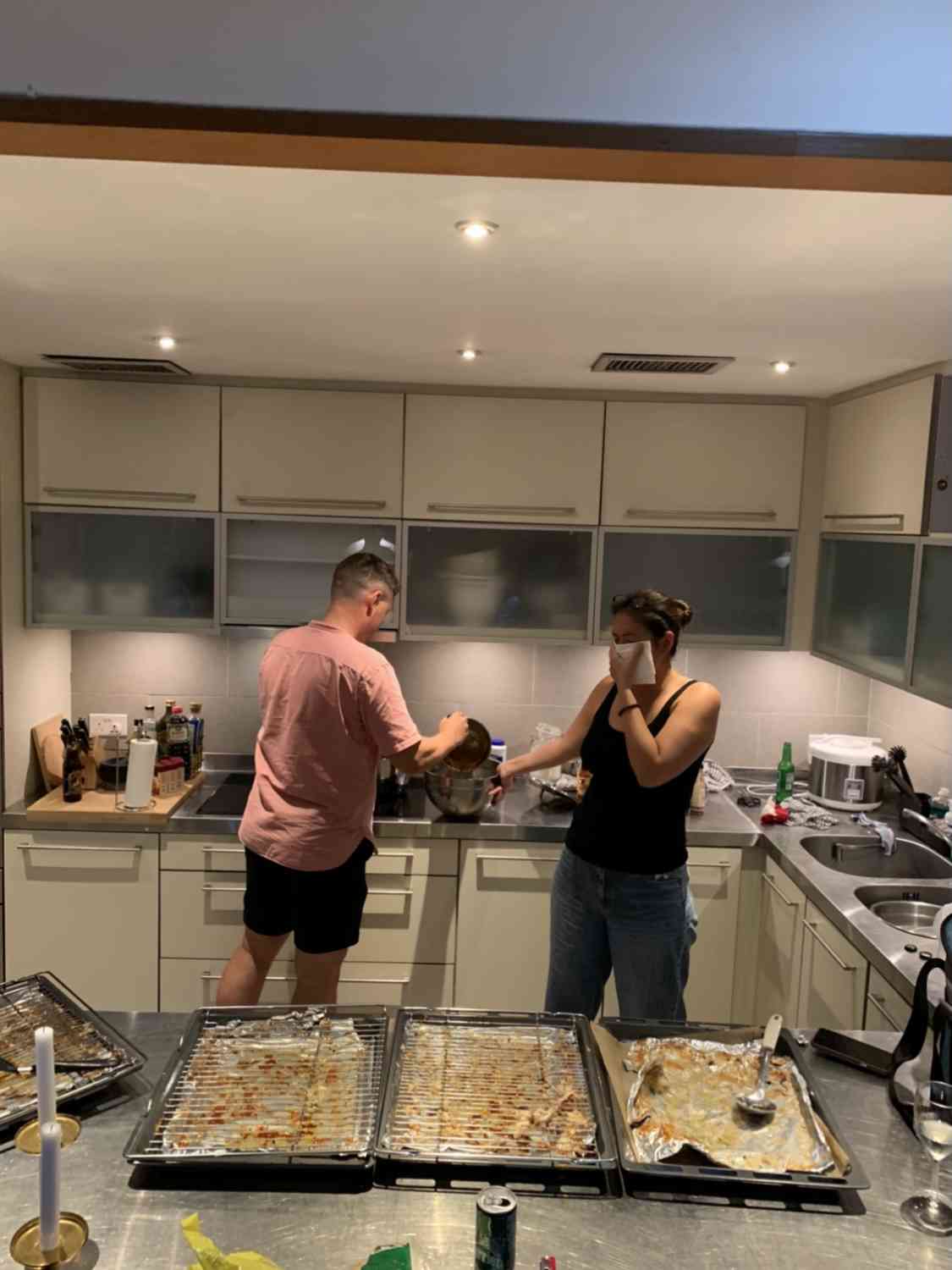 Kenneth and Rose did a superb job preparing the wings! :)

Patrik Wallner is a friend of mine and he was there filming everything. Patrik is a very skillful artist and we were lucky to have him. He works professionally with known brands such as Red Bull and Adidas, for whom he produces skateboarding videos, being a skateboarder himself as well. His content has even made it on ‘Last Week Tonight’ with Jon Oliver. You wouldn’t know it from meeting him because Patrik is a very down to earth and humble guy. Patrik showed up with two cameras and attached a microphone to me. One camera was static and he kept the other handheld while moving about between us. It is arguably the BEST video on Once Upon A Saga’s YouTube channel now and has already received a lot of praise. If anything, Patrik certainly caught the hygge of our HK Hot Wings Experience. I hope you’ll like it too. 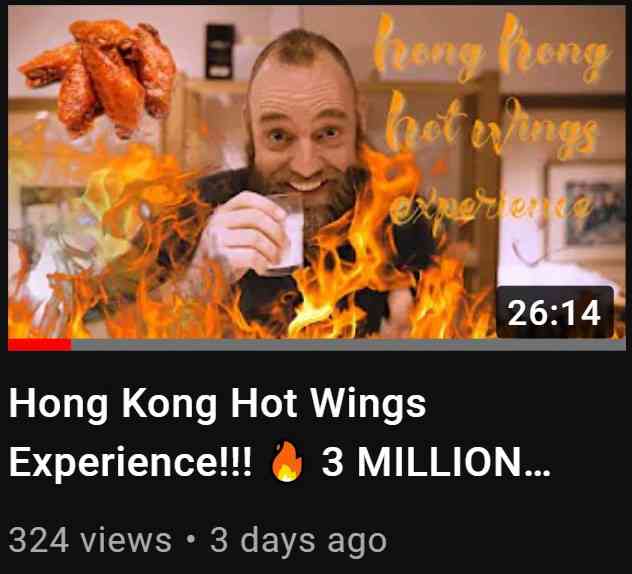 Click HERE or on image to watch the event.

Something special happened after we were done eating the hot wings. The atmosphere was magical. Everybody was in a really good mood and chatting away. And what I soon realized was that everyone had their own personal story which they were dying to tell!! Twelve people who had all had a taste of some severely hot chicken wings! “I didn’t like the taste of…the one which got me was…I couldn’t make it past number…the best one was number…” It had been a true experience for so many people including myself. And we caught it on video! How amazing! What a precious memory from Hong Kong :) 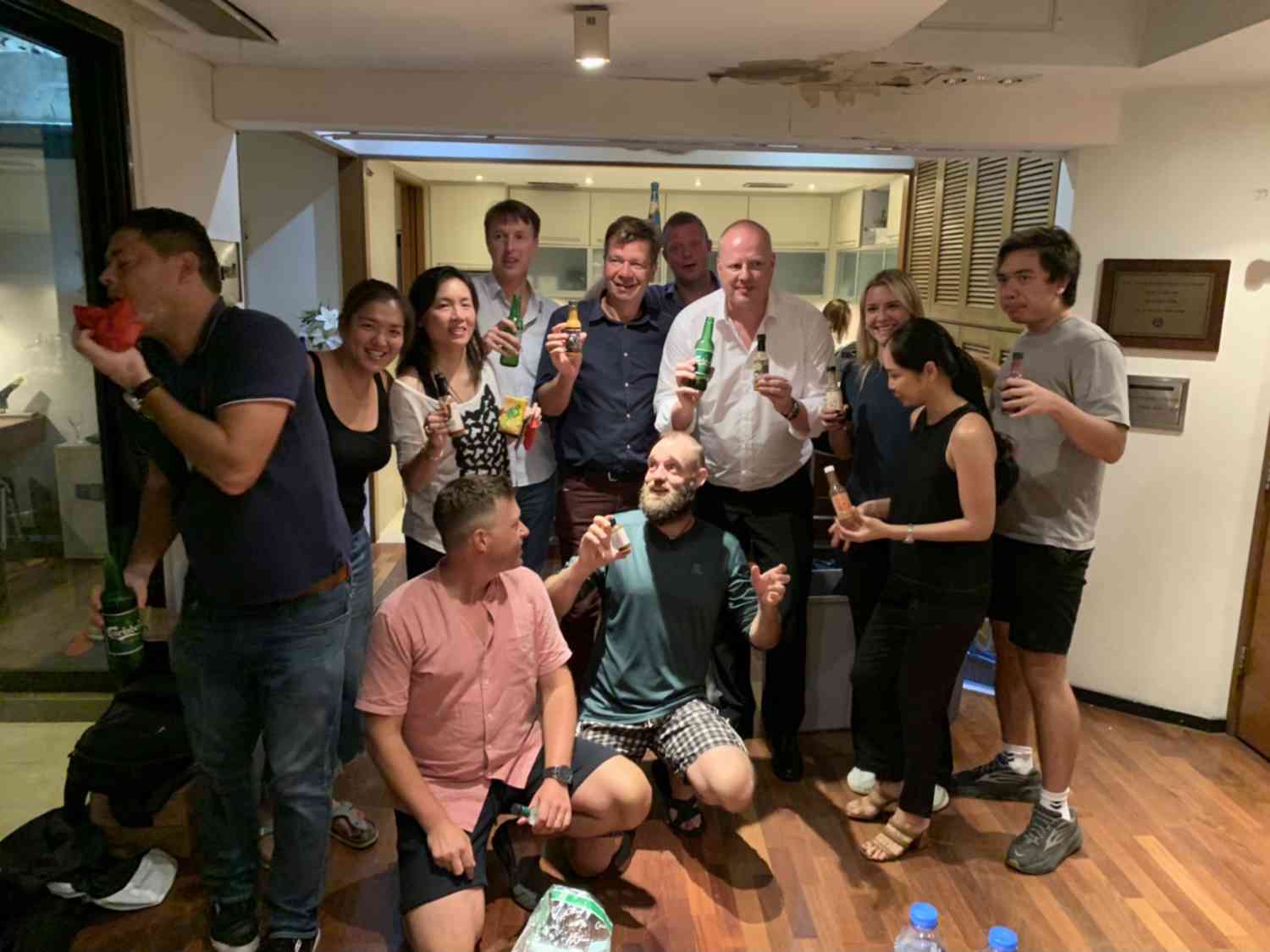 And what about Palau? Well, that pacific paradise, consisting of more than 200 small volcanic and coral islands, remains exactly where it was when we first reached Hong Kong for transit purposes more than 600 days ago. And yet, we may be closer to reaching Palau than any time since then. There has been a breakthrough. Our Dutch friend Roel, who is certainly a stranger turned friend, has done a lot of networking and footwork on our behalf in Palau. So much so, that I was contacted by a couple of members from President Whipps Jr. (what a name) legal team. We had a zoom call the other day and it was a delightful conversation. The two ladies also became my first interaction with Palauan’s which was quite exciting on its own. They were really sweet and very helpful. Palau is actually open for quarantine free tourism but it requires that you arrive on a vessel with everyone being vaccinated. This is easily done with an airplane. It’s not hard to get the flight crew vaccinated and demand that all passengers are vaccinated. It is however hard to find a containership where the entire crew from a multitude of nations are all vaccinated. And since I may be traveling to Palau onboard a ship alongside unvaccinated crew members, I need the support from Palau’s government to disembark. During the zoom call it quickly became clear that I have their support but we need to work out the details. Will I need to quarantine in Palau or not? Will I need a booster shot or not? It has after all been about six months since I got my second jab. And we also need the support of Pacific International Lines as they operate the vessels. So, think about this: in order for the plan to succeed we need Presidential approval along with access to a containership during a global pandemic. A tall order! Well, we’ve had Presidential approval to enter a country before (Ivory Coast during the Ebola epidemic) and we’ve been granted access to board containerships before. But my goodness – life could certainly be a lot simpler than this. I can only dream about waking up next to my wife back home in Denmark. 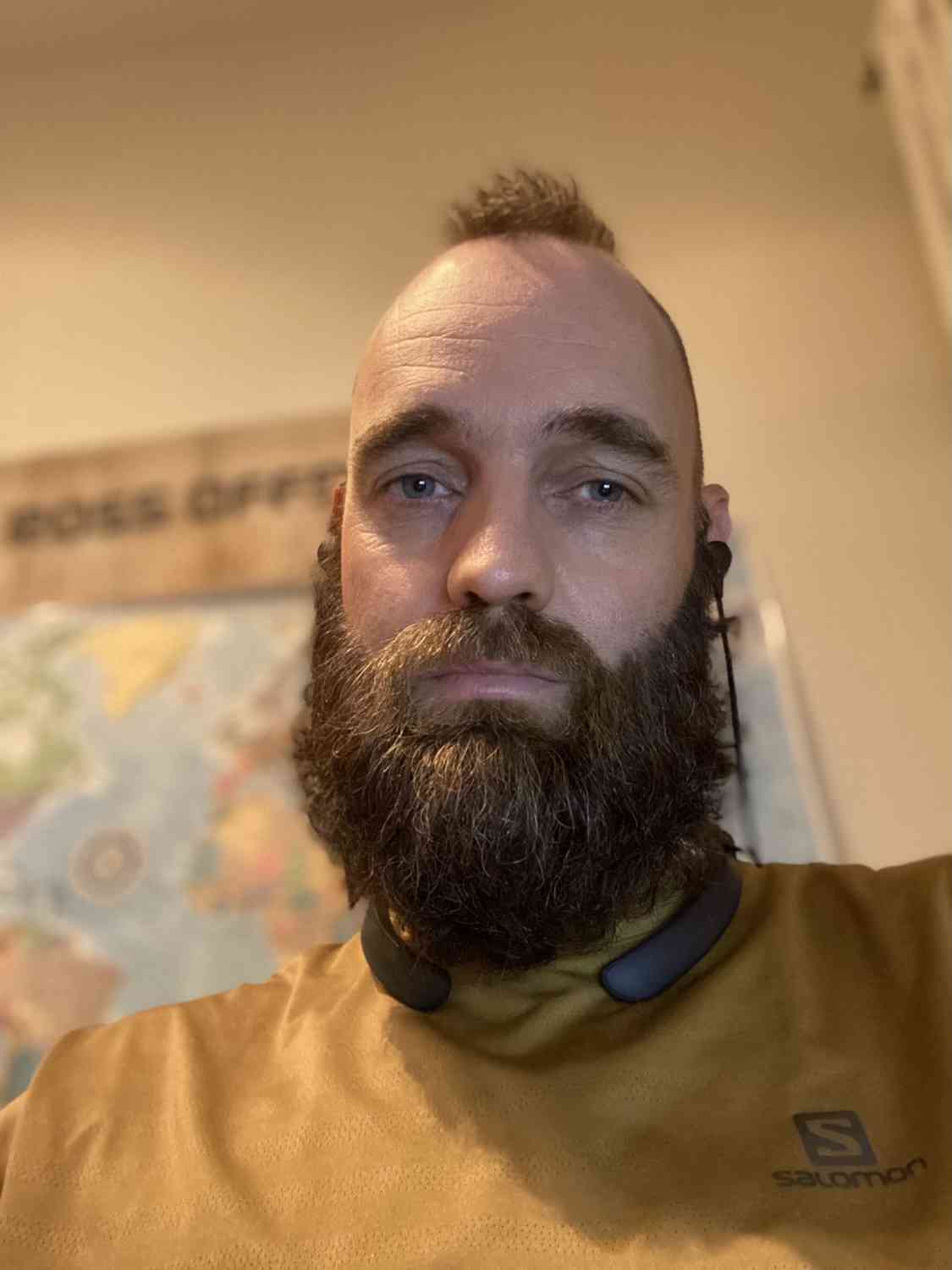 It's not easy people. But I'm still fighting for it. 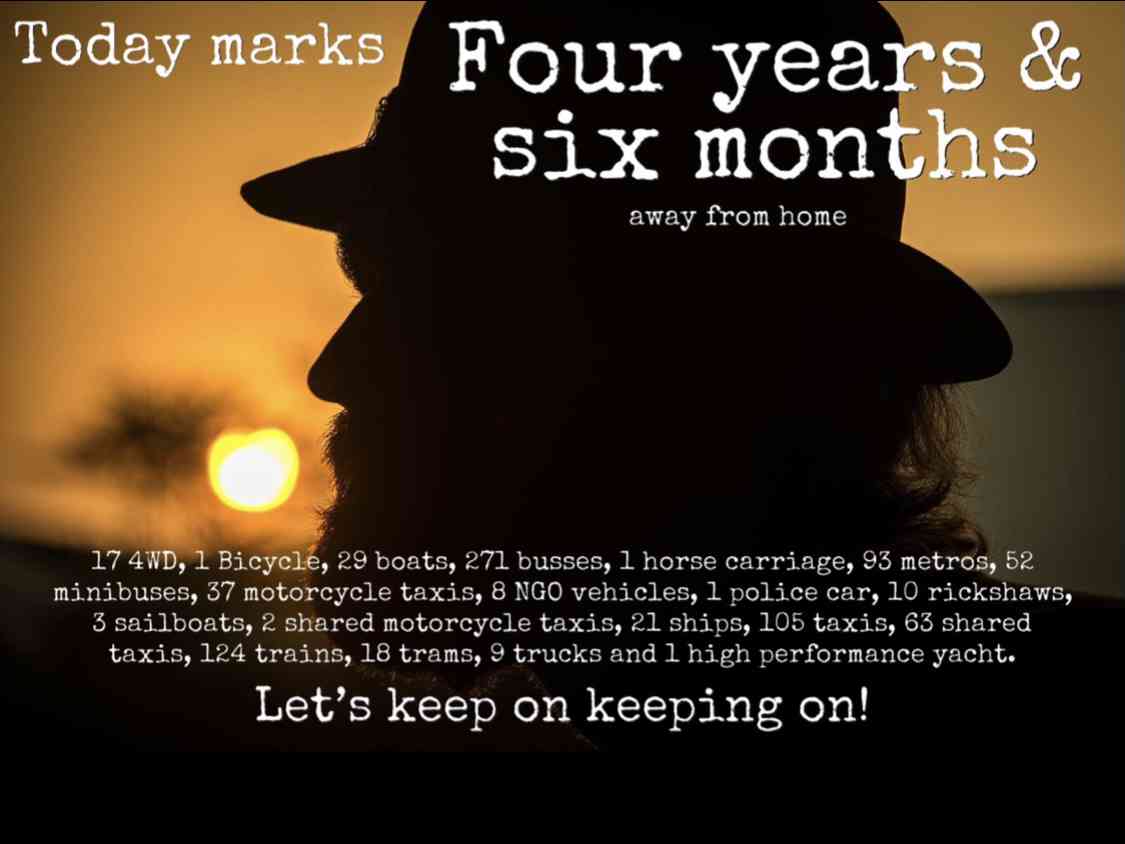 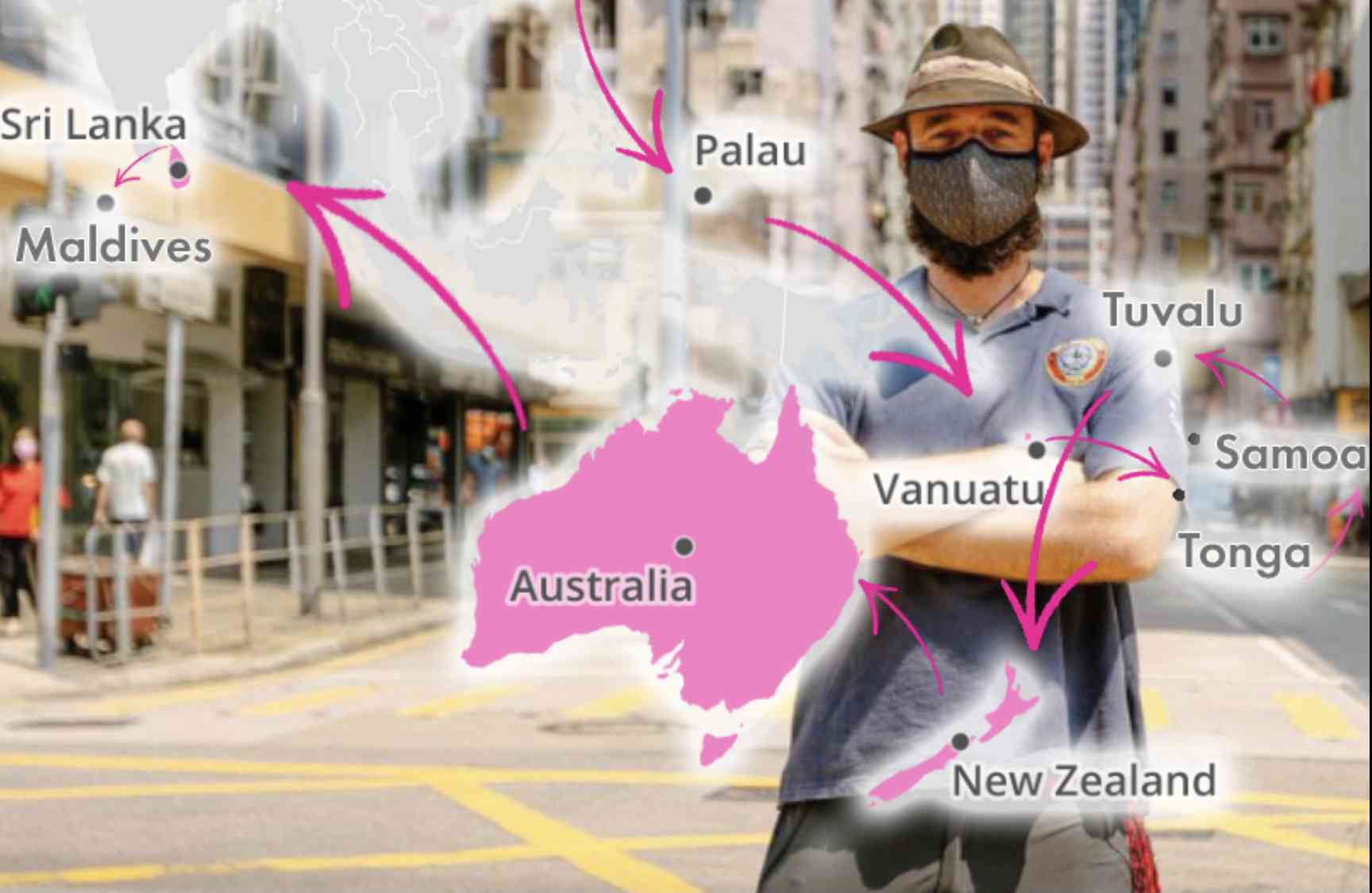 I’m looking forward to reaching Palau and showing you all what the island nation looks like through my eyes. Meanwhile we are holding on here in Hong Kong more than eight years into a nearly impossible project. While I do try my best to keep my spirits up it is pure madness what I have overcome at this point. And on top of everything else the past 600 days in Hong Kong have been a mental war between giving up and heading home vs sticking with it and reaching the final nine countries. My friend Jessi suggested I could make use of the World Mental Health Day 2021 which coincided with the eight-year day of Once Upon A Saga: October 10th 2021. But I opted not to do so. It is tempting to “burn it all” and head home. Eight years is a really long time to stay focused and motivated. A really long time. But it’s not like there’s nothing to show for it. The world deserves a positive promotion. Too much is far too often overlooked and overshadowed. The world is not a perfect place but it is in far better shape than most people know and believe. We have reached 194 countries from the targeted 203 leaving us with 9 to go. There has been something nice to say about each country. There has been something interesting to learn. And most importantly there has always been someone kind to meet. Yeah, so for now let the only burning be the one of some really hot sauce.