I still cannot believe it

After 708 days of being pandemically stuck in Hong Kong we are now at sea! That is a very long time to wait for a solution to come into fruition.

Last week’s entry: Please, give me a break

With 708 days in Hong Kong, I have had 708 days to give up. The first five months were spent living with the wonderful Savagar family, who initially expected to host me for four days in their guestroom. I remember reaching Hong Kong on Pacific International Lines (PIL) good ship Kota Hening back on January 27th 2020. The news had begun to report on a virus outbreak in a Chinese city called Wuhan which I had never heard about before. The captain provided me with a mask and told me that I’d better wear it. The following day I disembarked the good ship and met PIL’s agent Mr Keith Leung, headed to immigration and then Mr Keith drove me all the way out to Sai Kung where the Savagars live. You all know what followed…hoarding of toilet paper, lockdown in Italy, mass graves in New York, lockdowns, travel bans, handwashing songs, the first vaccines, uneven distribution, political polarization, anti-vaxxers, new variants, and I guess that more or less brings us up to speed. My goodness we have looked at many options for leaving Hong Kong and making our way to a new country! This is the very first plan which bears fruit. We have been able to leave HK thanks to efforts by Roel (our Dutch friend in Palau), Pacific International Lines in Singapore, my friend Bjarke in Singapore did his part, Frank at MTL in HK helped out, Vikas at Anglo Eastern in HK helped, we’ve had support in Palau from Anguar State all the way to the heights of Parliament in Koror. And the first step on this particular road was taken back in June 2021. What an achievement of collaboration. So many to thank for so much. Let’s take a look at how my last days in HK were spent. 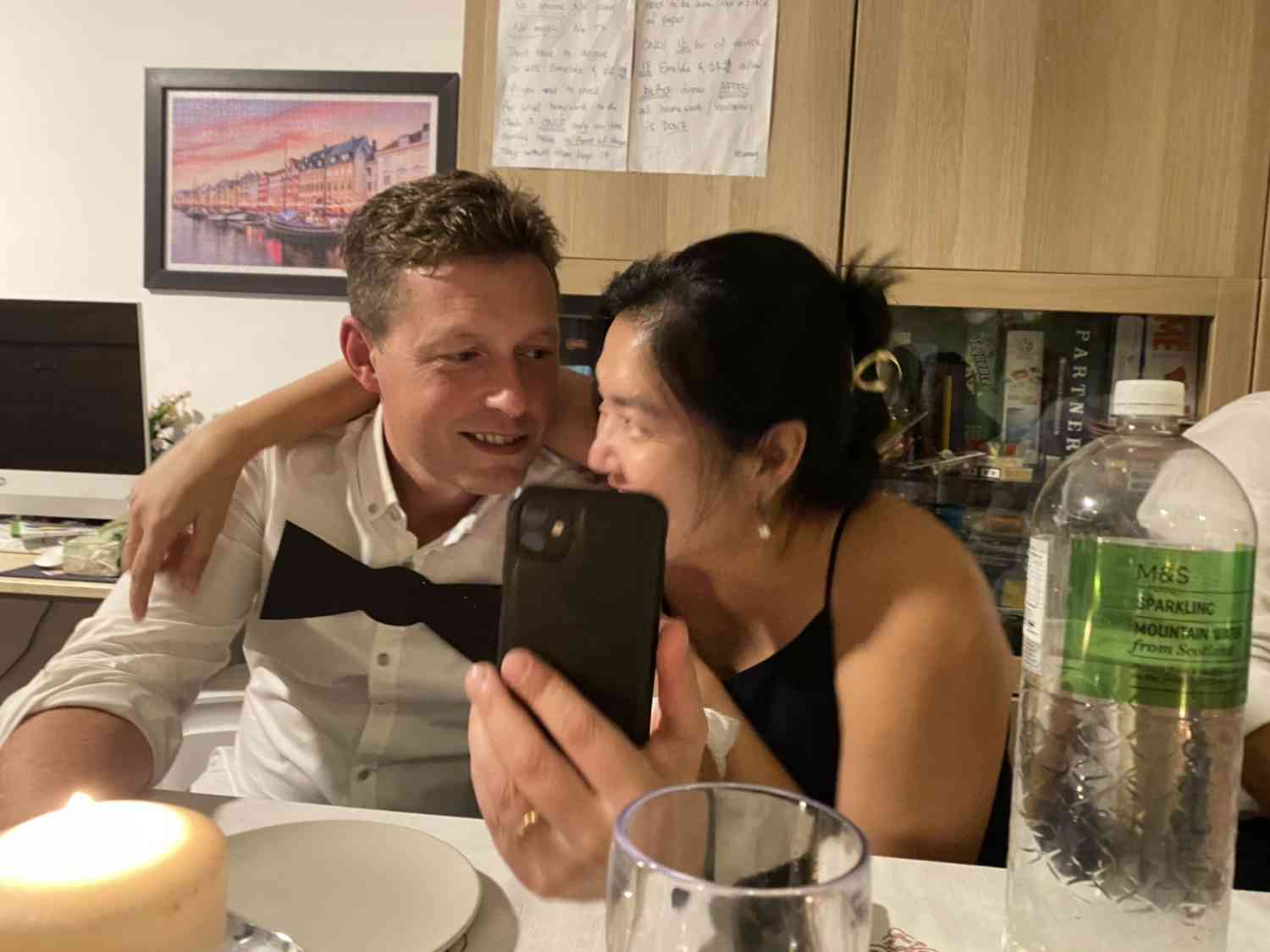 New Years Eve was spent at Kenneth and Rose’s home together with their two children Sofie and Anton. And once again much of the Danish Mafia in HK was present: Thomas of the Andersen Clan, Anita, Christian and little Victor. Poul and Amy along with Poul and Amie! And we were even joined by Reverend Rebecca Holm. Kenneth is a master chef and along with an entre by Anita’s hand the New Years Eve meal was spectacular! 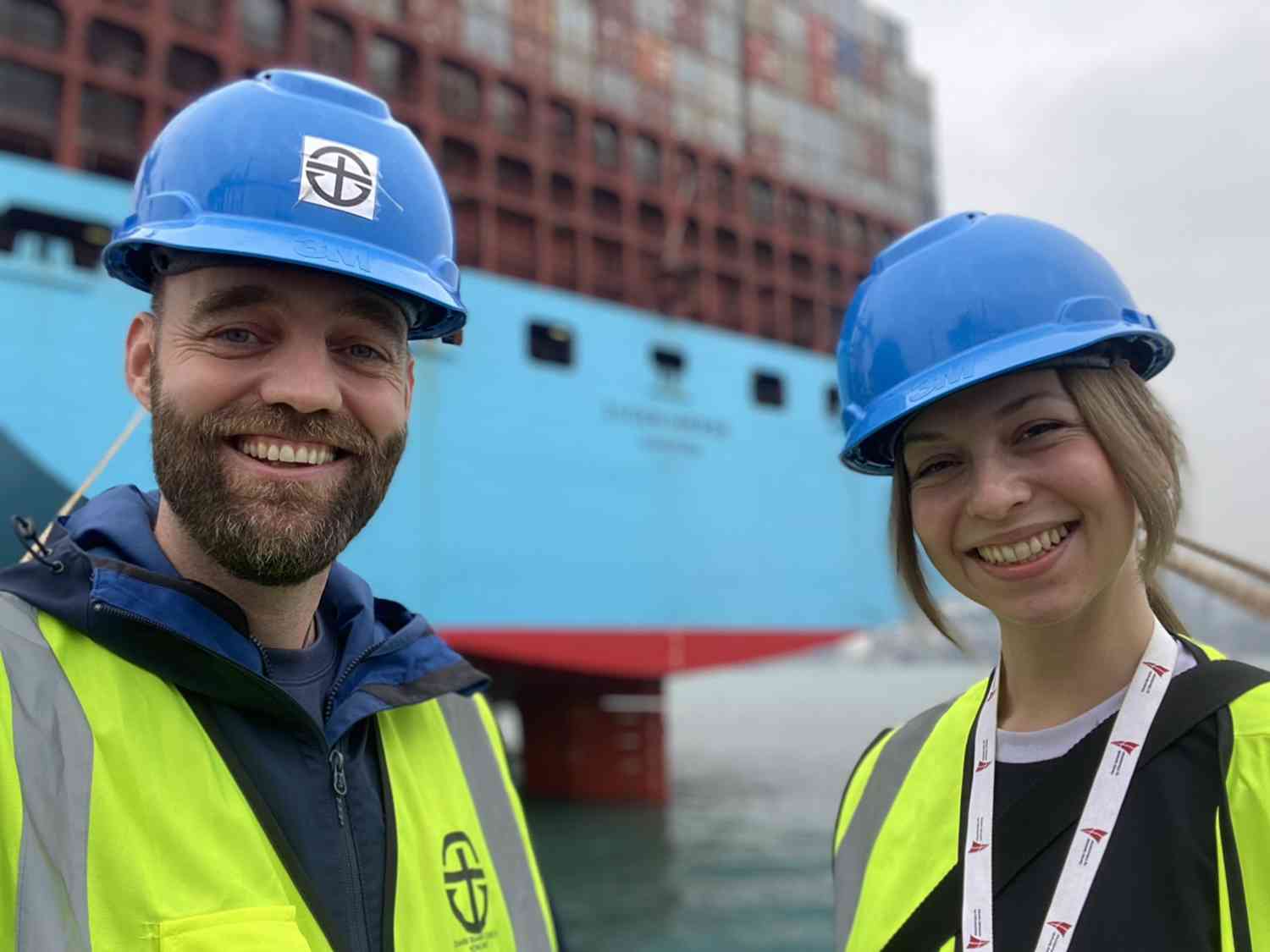 It has been a pleasure serving seafarers and Danes alike through my job hat the Danish Seamen's Church in Hong Kong. Everyone can look forward to meeting Reverend Rebecca Holm :)

I have been saying farewell to Hong Kong lately. I don’t know if I will be returning although I think it is currently the best plan. Because from Hong Kong I could probably board a vessel to Australia or New Zealand where I can get a new passport. I’m only left with nine pages and just as many countries. New Zealand doesn’t even have a Danish Embassy. It is run from Australia. But New Zealand has a very kind Honarary Consul. Palau, Vanuatu, Tuvalu, Samoa and Tonga certainly do not have Danish representation. Sri Lanka might but that’s far away and The Maldives definitely doesn’t. I would run out of pages in no time. So that's a bit about that. This week I was fortunate to get invited back onboard the “Wine Knot?” which is a sailboat my friend Henrik has access to. We headed out to sea along with a bunch of friends and had a nice dinner at a floating restaurant. Over the years I have come to learn something about myself: I have a tendency to get seasick if I am exhausted, sleepy and dehydrated. I was two out of the three and felt rather queasy heading out and returning. I avoided throwing up and instead had a good afternoon nap on the way back. But still, it was a nice way to say farewell to Hong Kong’s shoreline. Hong Kong has a staggering 1,189km (739mi) of coastline and more than 250 islands. There are around 100 beaches and the territorial waters are 1,651km2. I may have been queasy but I got to say farewell. 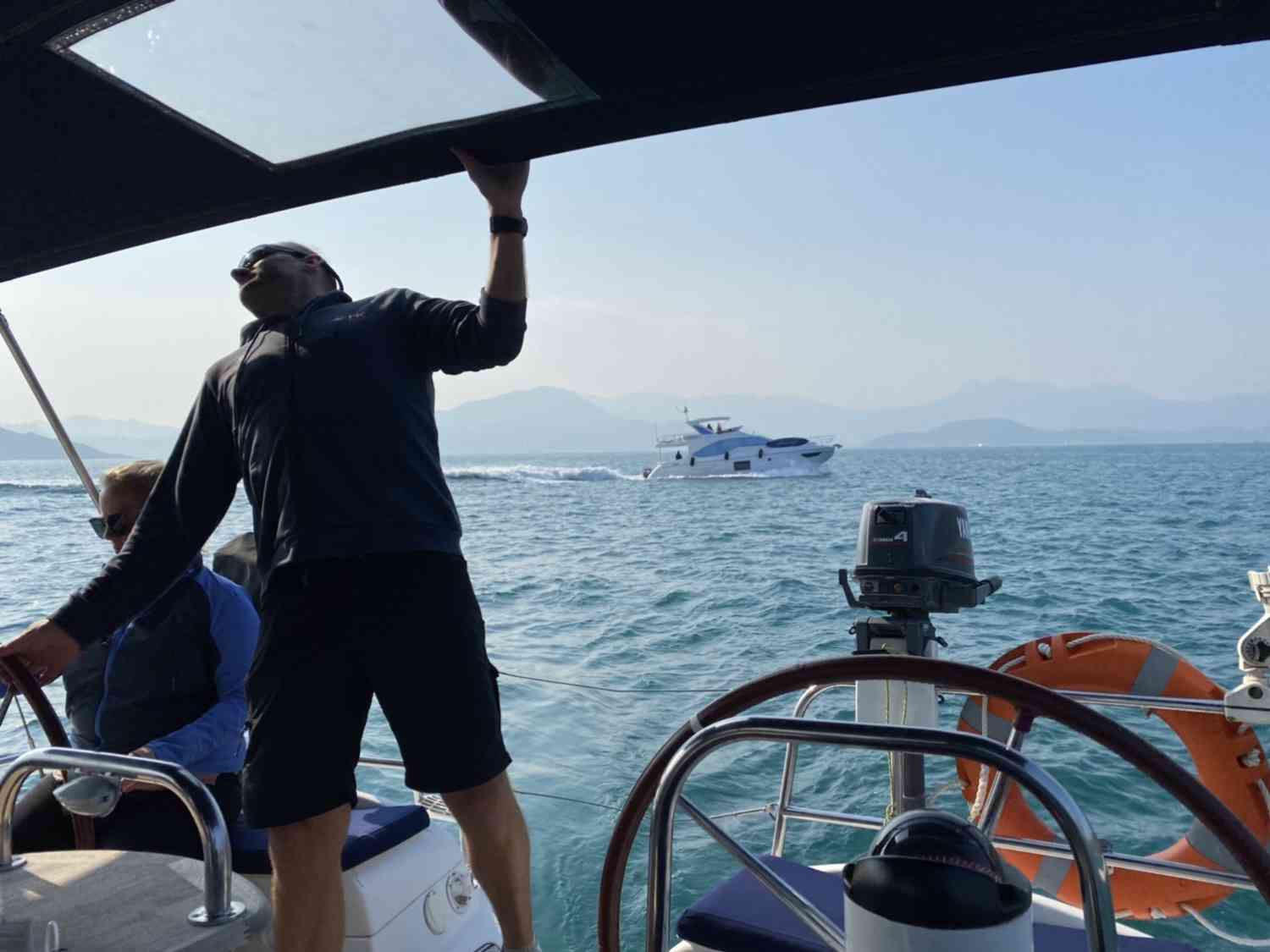 Henrik reading the sail and perfecting the trim onboard the Wine Knot?

The next day I said farewell to the mountains. My goodness I have spent a lot of time in the mountains. I once sat out to reach the twenty highest peaks. I have hiked and trail runed across the many of Hong Kong’s hundreds of trails and all four ultra-distance footpaths. On April 11th 2020 I did my very first ultra-distance. It was the Hong Kong Trail which measures 47.5km +/-1km (29-30mi) from Victoria Peak to Big Wave Bay on Hong Kong Island. The Trail has an elevation of 1/8 of Everest. I did it together with three friends: Dehua, Leon and Brett from ‘The Running Klub’. Brett has since coached me a bit. Back in April 2020 we did it in 12:06:00 and my body was destroyed afterwards. But the day after the boat trip I aimed for a sub six-hour time and clocked it in: 05:59:28!! Trail running and hiking has been a big part of my life while in Hong Kong. And I’m a big believer in that we must aim to be better tomorrow than what we were yesterday. Cramps began to set in after five hours. It was a mind over body thing and it left me severely exhausted. But I reached my goal! Hong Kong has some breathtaking nature and I will miss Hong Kong. 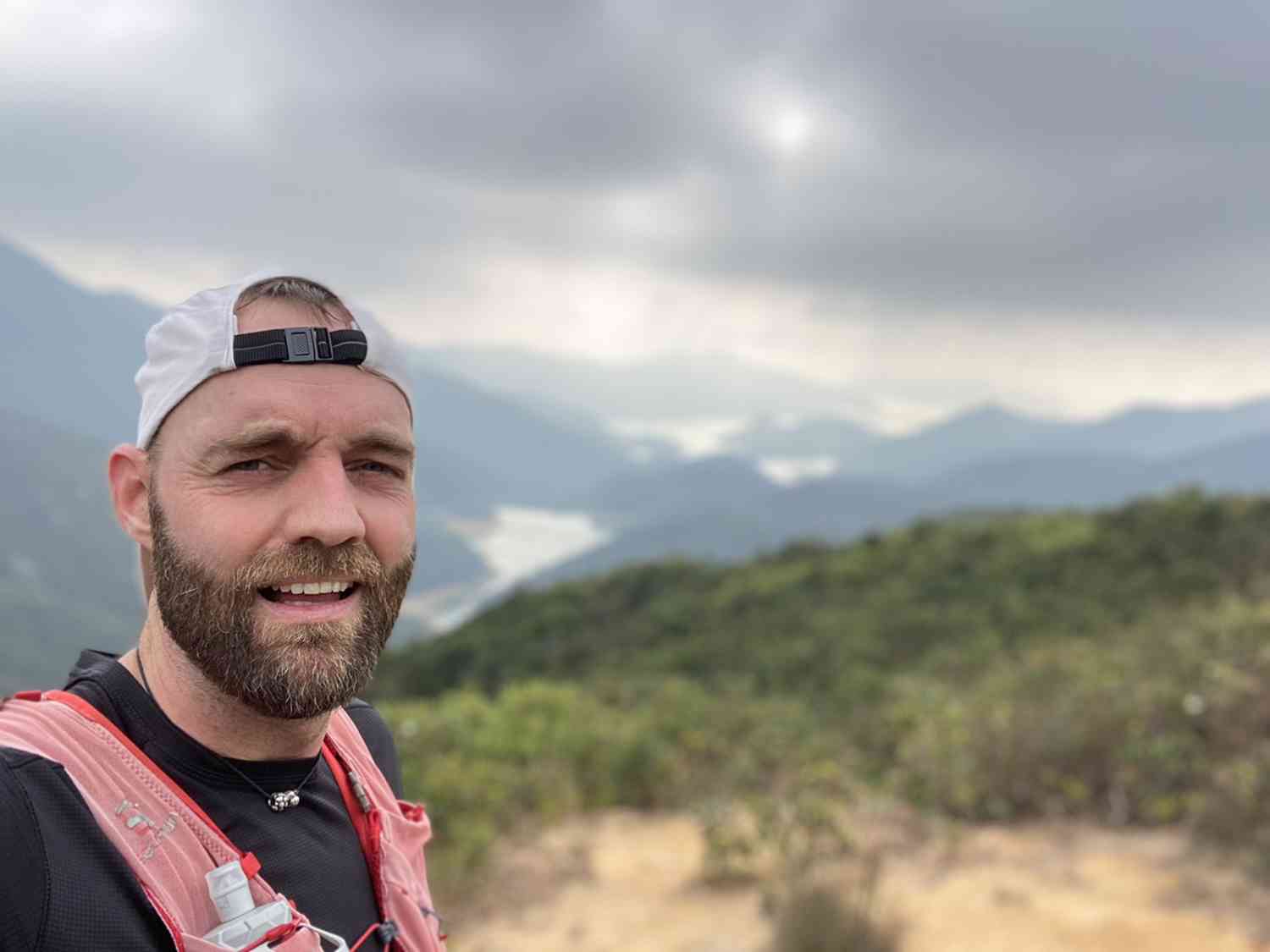 I took this photo halfway when I was confident. I lost confidence after 5hrs and was convinced I would't make it under six hours. It was only during the last 20 minutes I saw I still hada chance. And I was in doubt until the very last minute!! Close cut!! My average puls across the six hours was at 150 beats per minute!

The very next day I said farewell to the city which Hong Kong is most famous for. In reality 75% of Hong Kong is nature and only 25% is urban setting. But perception is reality. I met with my friend Kenneth for lunch and afterwards I met up with my good friend Anita for 90-minutes of foot massage followed by dinner. Hong Kong has an amazing city where just about anything can be found. The following day I had lunch with Thomas of the Andersen Clan. After my five months living with the Savagars, I lived for a month in Wong Chuk Yeung near the Andersen Clan. 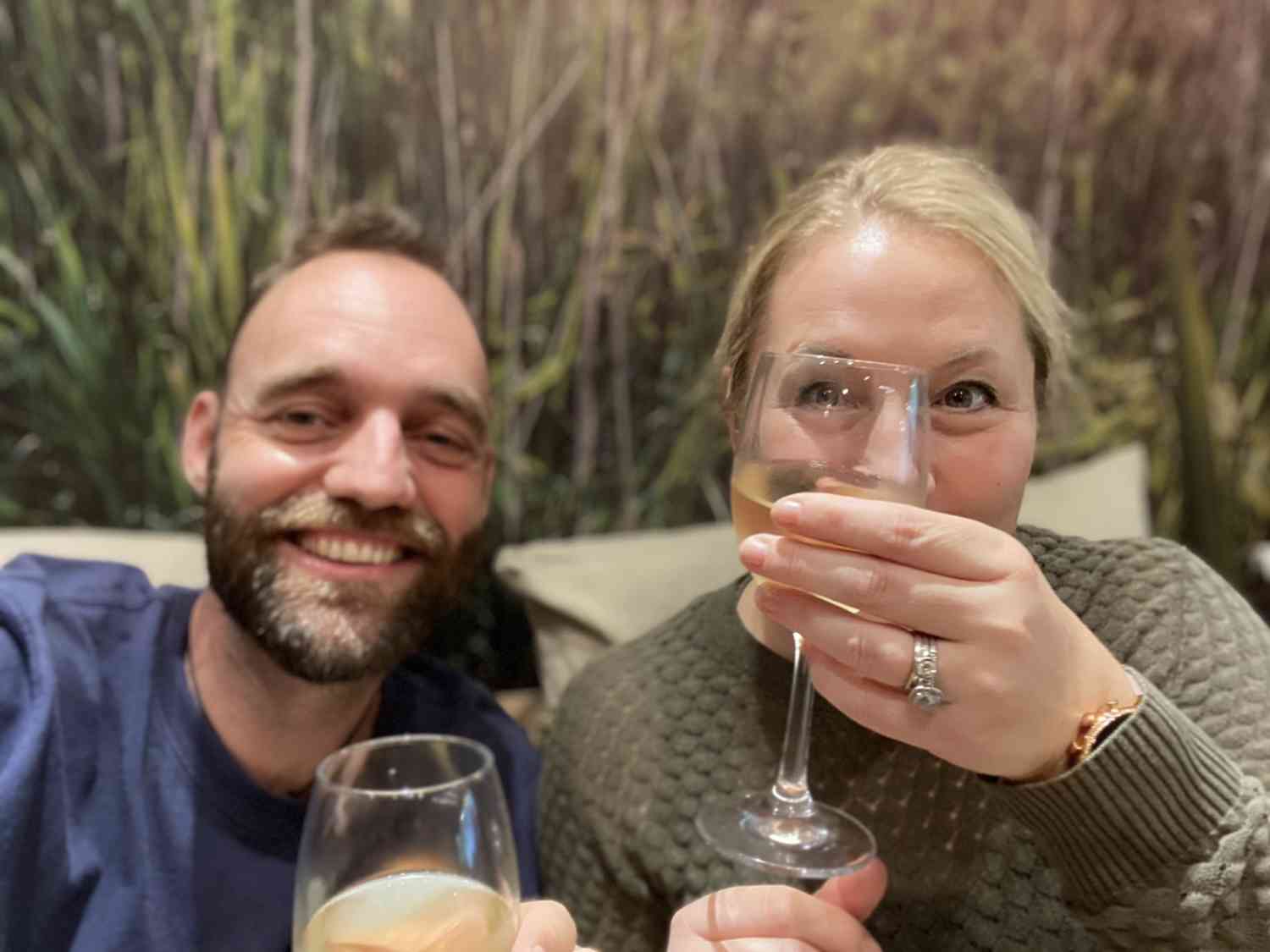 White wine and foot massage with Anita. Afterwards we had dinner with her husband Christian and their son Victor.

I thought that I would be ecstatic over the news that I am leaving Hong Kong. Or at least happy? But in reality, I am not feeling much emotion at all. Perhaps it needs more time to sink in? Before arriving to Hong Kong, we were reaching a new country every 12.37 days on average. My time in Hong Kong has by no means been wasted. I summed up some of the highlights and shared it across social media. It went something like this:

Saying farewell to Hong Kong is HARD - but in a good way…so many memories. Good and bad. Ultra-Wifey has been out to visit twice.

I have some amazing friends in HK.

I’ve had an amazing collaboration with Discover Hong Kong.

I’ve reached all sorts of crazy side goals:

I’ve never throughout my life been anywhere for as long as this in any one place without crossing a border! My mother is from Finland and my father from Denmark. So even as an infant we would travel to see family.

This is not goodbye - this is farewell. Hong Kong, like any other place, is constantly changing and I WILL BE BACK to see what the future has in store.

We have now returned to the Pacific Ocean on our way to Palau which I’m sure is an amazing country (and we may return to HK in Feb).

If you’ve ever been to Hong Kong then you know what I’m on about. If you’ve lived in HK then you were very lucky.

Last Wednesday we boarded the good ship ‘Kota Ratna’ which will pass by Taiwan, Guam, Saipan, and Yap before finally reaching our first new country in two years: Palau here we come! I have been received well onboard by the kind Captain S. M. Abbas Zaidi and his brave crew. They have been bending over backwards making my stay as comfortable as possible. The food is good and everyone has been really sweet. Unfortunately, I fell seasick almost immediately and have spent much of my time lying down. I guess I will need to earn those sea-legs back again. But other than that, I have been sleeping like a baby! We have reached Kaohsiung in Taiwan which is why I once again have internet. I expect to be offline from now on until we reach Koror in Palau around January 19th. By then I’ll share my stories from onboard the good ship Kota Ratna! Some really good news is that the ENTIRE crew is vaccinated!!! So I might not need to quarantine in Palau at all.

Thank you all. You’ve helped make Hong Kong truly special to me. Stay safe and sane wherever you are. 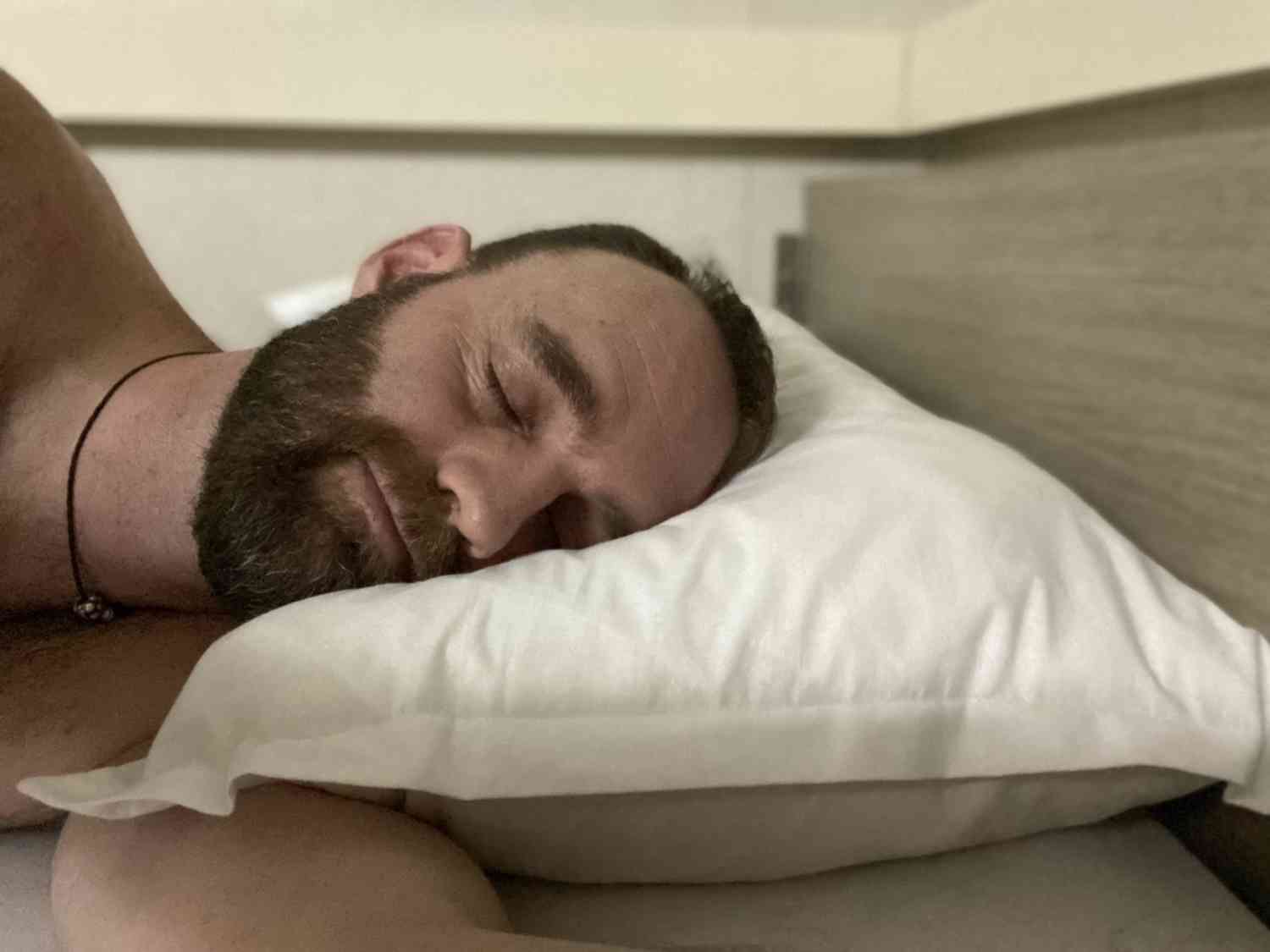 Onboard the good ship Kota Ratna.

Best regards
Mr. Torbjørn C. Pedersen (Thor) - your humble host of Once Upon A Saga.