Leaving Australia – alive! Is it a miracle?!?

Somehow, I am still alive?

Townsville – Brisbane – Sydney – Canberra – Melbourne – Launceston – Judbury. Yes, that is a list of places within ‘Straya where I have slept…and woke up the next day during this visit. And what a long list of fine people I could also have made based on that.

There is much to be said about people and irrational fear. And there is much to be said about fear itself. Fear sells and fear spreads. As someone who has been to most countries in the world, I can comfort you a bit. The world is by no means as dangerous as some people might have you believe. Neither are strangers, foreign cultures, the most common religions, or dropbears. Well, the exception might just be dropbears! Stay away from those vicious creatures. Ultra-wifey flew all the way from the safety of Denmark to the country which is often said to have eight of the worlds ten most deadly animals. She thought she would never see that day! But she came to Australia anyway. And she ended up having a really good time, she did not die, and she left again with many fond memories of many kind people and many interesting places. From Kara in Townsville to Cam in Melbourne, I too have had a good time. 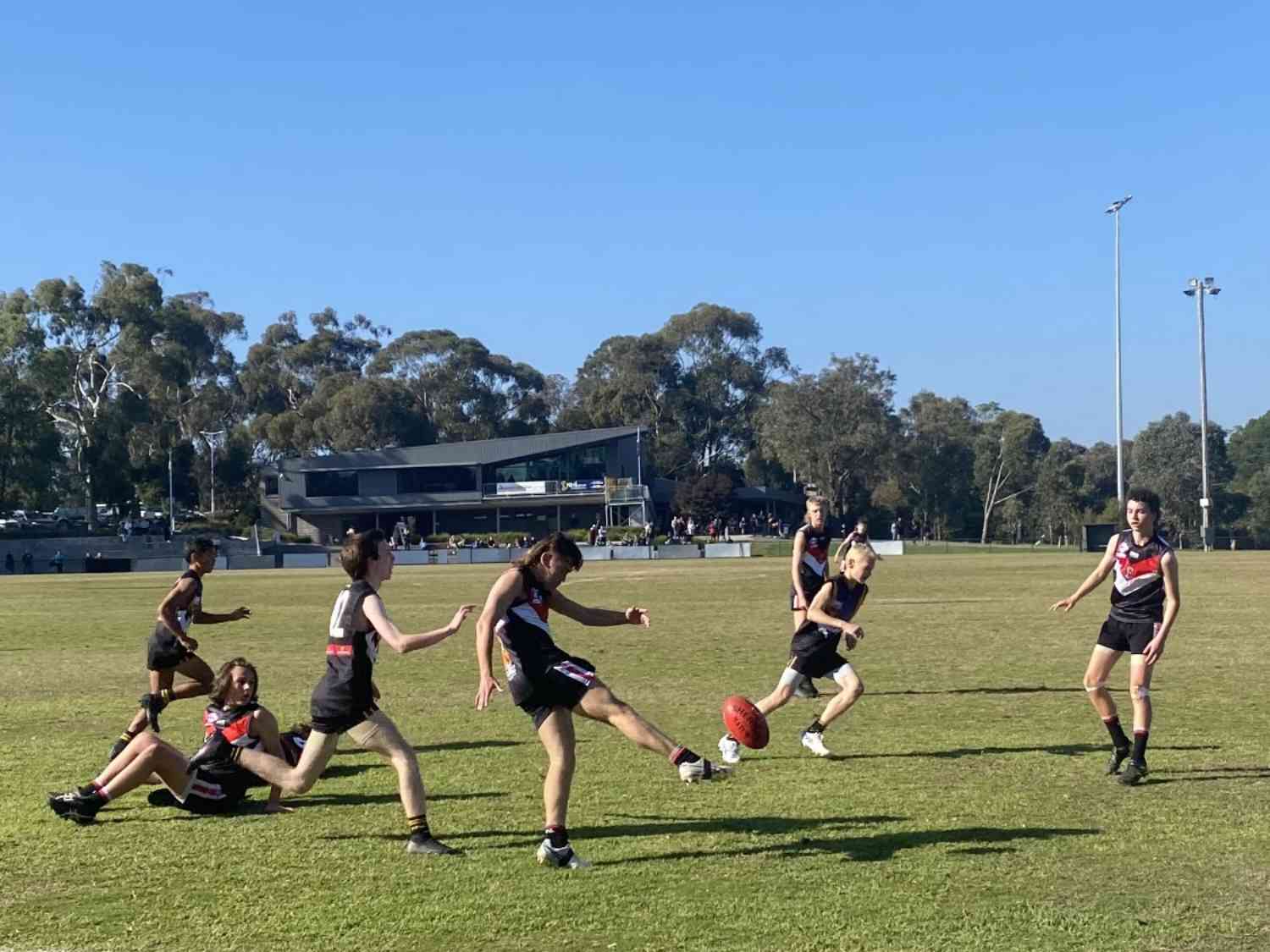 My goodness the Aussies love their AFL!! And their mullets too ;)

I really like how my story with Cam begins. Mostly because it plays so well into the Saga’s motto about a stranger being a friend you’ve never met before. Cam and I met in Bangkok, Thailand, back in 2006. Back then I was a very green traveller and had never backpacked a day in my life. I was however working as a logistical manager on a cement project in Libya. A break in the Libya project had led to my arrival in Thailand as I wanted to see Angkor Wat. Little did I know that Angkor Wat was actually in Cambodia and not in Thailand. Yes! That is how green I was back then. I also bought everything you could possibly imagine at the airport terminal in Bangkok: my hotel room, limo service to my hotel, and even a chauffeured tour around the most touristy sights the following day. They must have been laughing at me as I left the airport. Cam on the other hand already had some real adventurous travel under his belt. He was living on the smallest budget you could imagine and had his accommodation in a tiny concrete room with no windows. By chance the two of us met on a street and began talking. As we were both hungry Cam offered to show me a nearby (cheap) food court. And the next day Cam joined me on the limo sightseeing tour as I had plenty of space in the car anyway. 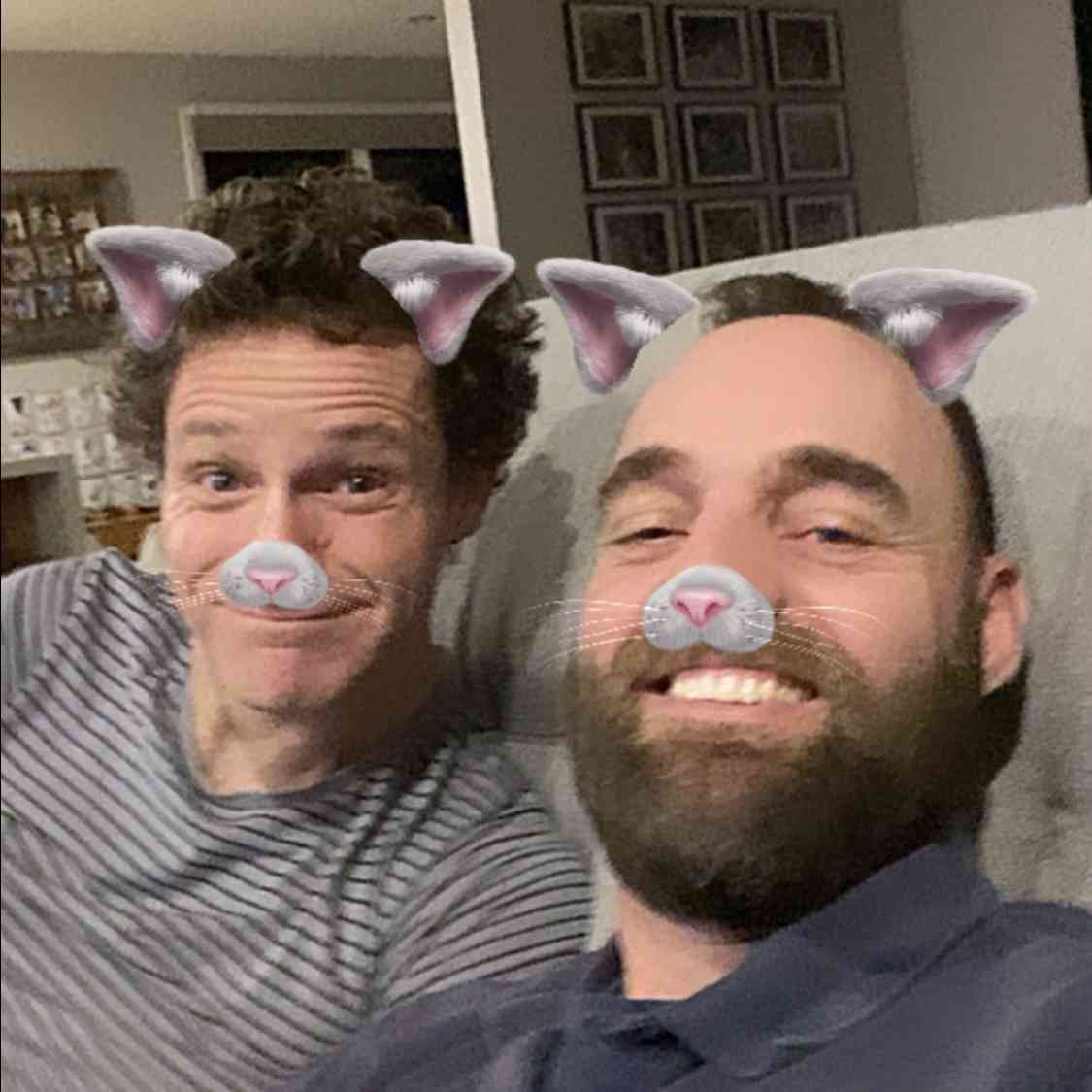 Mocking about with filters :)

It happens so often here in life that we meet people. Sometimes that is all it is. While sometimes it grows into more. On my third day in Bangkok back in 2006, Cam was getting ready to leave for India and I was catching the train north to Chiang Mai. We exchanged email addresses and parted ways. And that could have been the end of a friendship between two young men living on opposite sides of the planet. But as you would already know, if you watched our video, it was far from it. And as such I have been in and out of their home several times while during this visit to Australia. 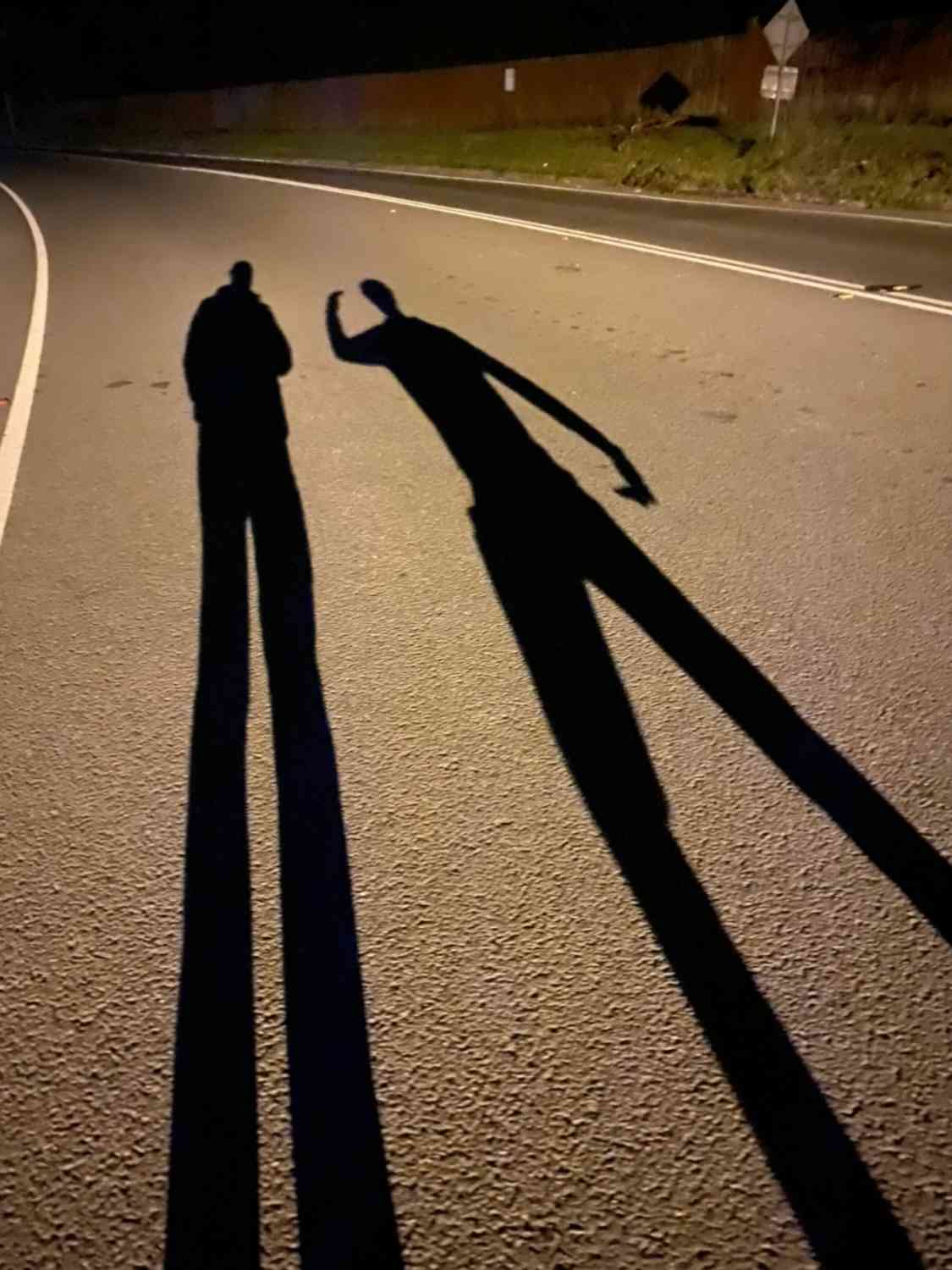 On a late night walk with Cam.

Australia is not perfect. But that is alright because then there is still something to strive for. Perfect countries do not exist. Australia is however a well-loved country all over the world. Personally, I have never come across anyone who did not adore Australia. And it certainly is a mighty fine country for a variety of reasons. I enjoy the work of several Aussie actors: Hugh Jackman, Nicole Kidman, Cate Blanchett, Chris Hemsworth, Eric Bana, Heath Ledger, Paul Hogan, Margot Robbie, Guy Pierce and many more. For years I’ve enjoyed Aussie music: Kylie Minogue, Sia, Natalie Imbruglia, Gotye, Olivia Newton-John, Nick Cave, AC/DC, INXS, Midnight Oil, Savage Garden, Crowded House, The Waifs, Xavier Rudd etc. And I have spent many hours listening to Australian comedians: Tim Minchin and Jim Jefferies. Yeah – the last list is short for me albeit they have plenty of others. Kangaroos, didgeridoos, koalas and boomerangs. There is a lot more to the country than that. I feel privileged to have seen and experienced a lot of it. 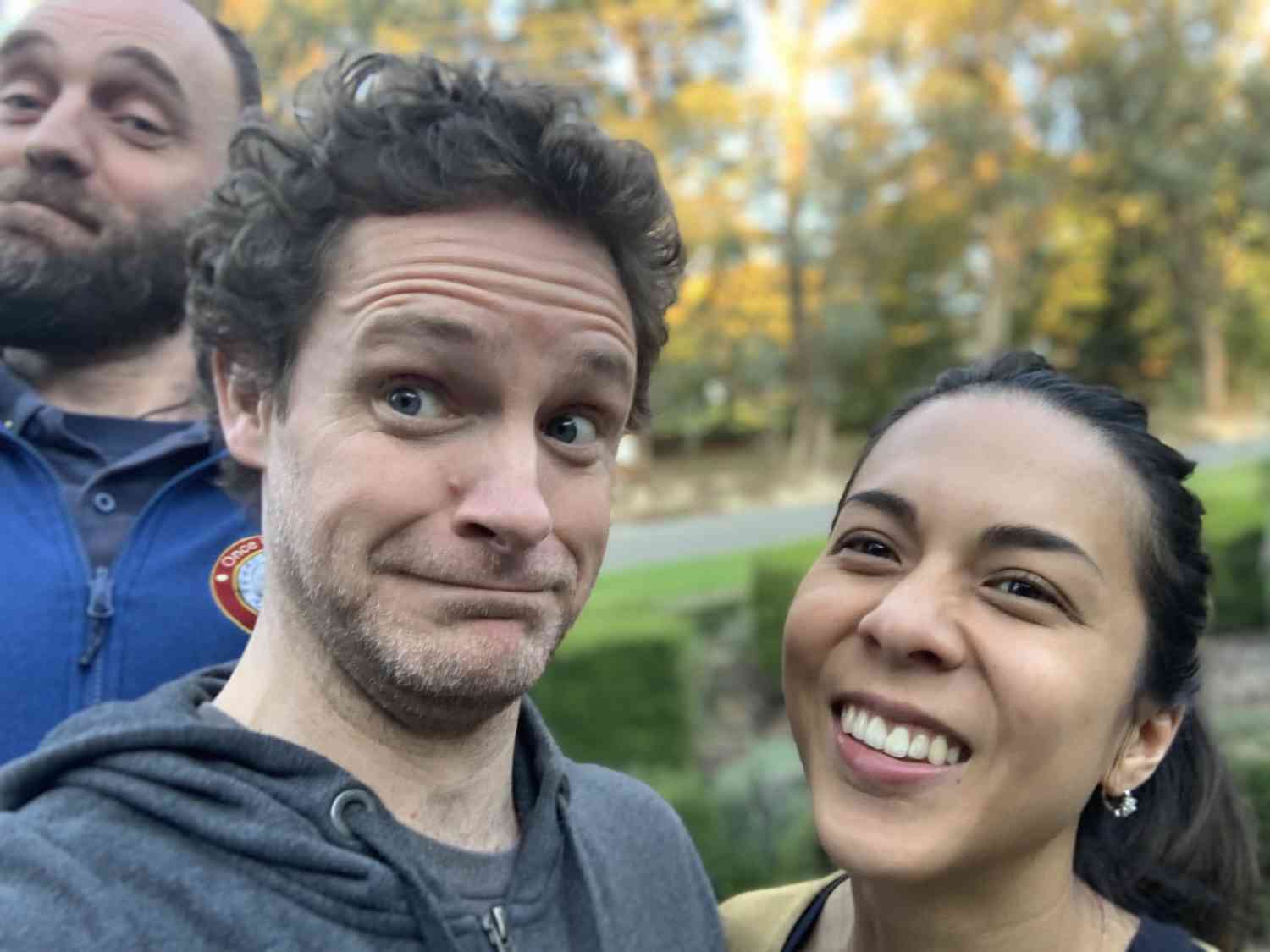 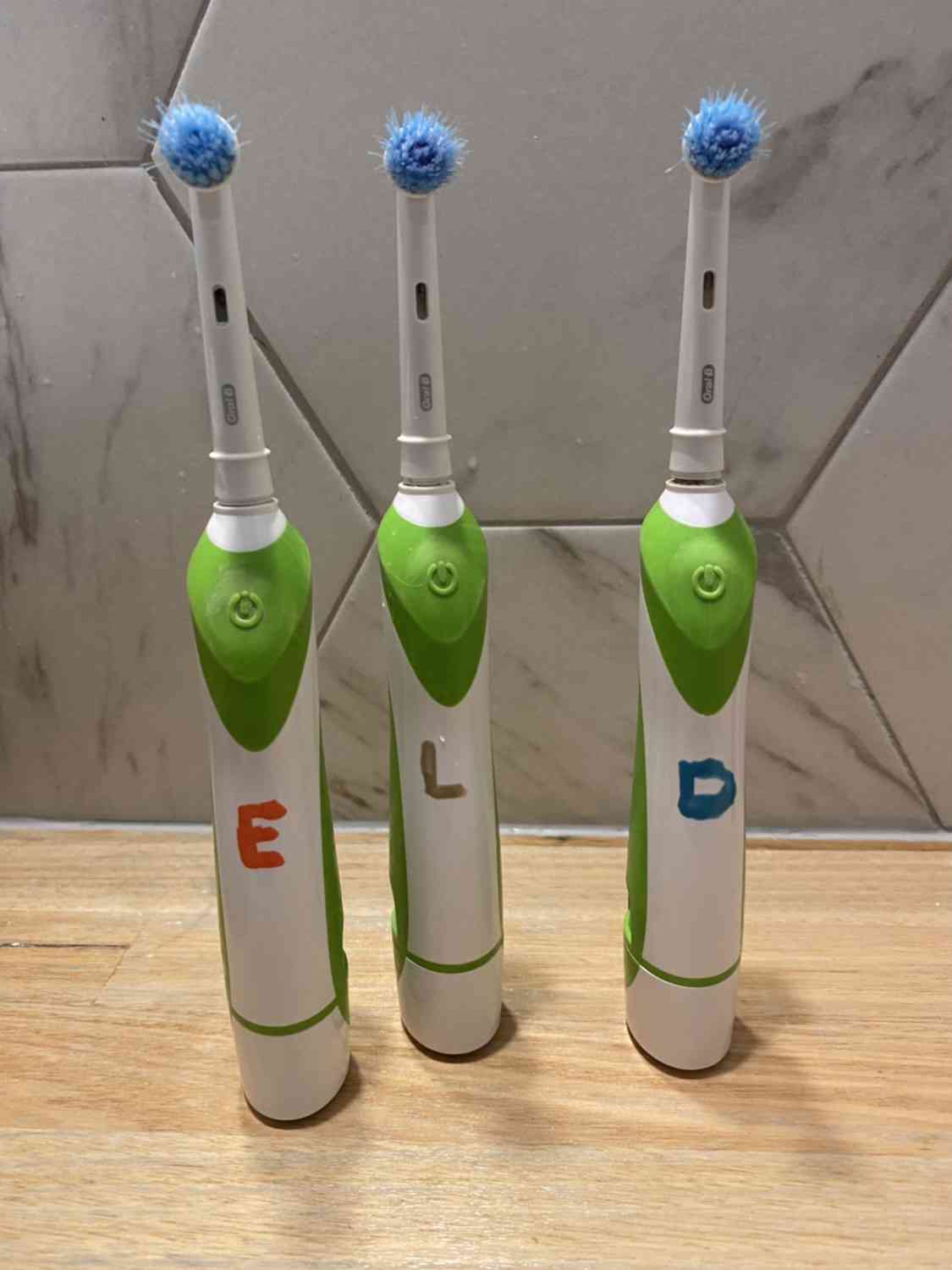 And their three children...

It has been good staying with the Brookes family. My days mostly started at 07:00am just before the first kids got out of bed. 2-year-old Darcy and I would sometimes have minute long conversations based solely on: “hi Thor”, “hi Darcy”, “hi Thor”, “hi Darcy”, “hi Thor”, “hi Darcy”… Cam is a teacher at Donvale Christian College and leaves every morning to go to work. Justine used to work there too but now spends her days being the worlds best mom and keeping the house. I have often observed Justine while she interacts with her children and wondered if it could possibly be done any better? She seems like a natural and clearly enjoys motherhood. One day takes the next: shopping, cooking, laundry, going for a walk, naptime, friends pop by, firewood is lit, The Voice on tv, red wine in a glass… Cam and Justine have three wonderful children and that is undoubtably a product of the upbringing provided by their parents. And a large part of these children’s life has been subject to some of Australia’s hardest and longest lockdowns. Australia does however seem to have moved beyond the pandemic now. As has most of the world…but not all of it. Walking through the 100 Acres Reserve with the Brooksies. 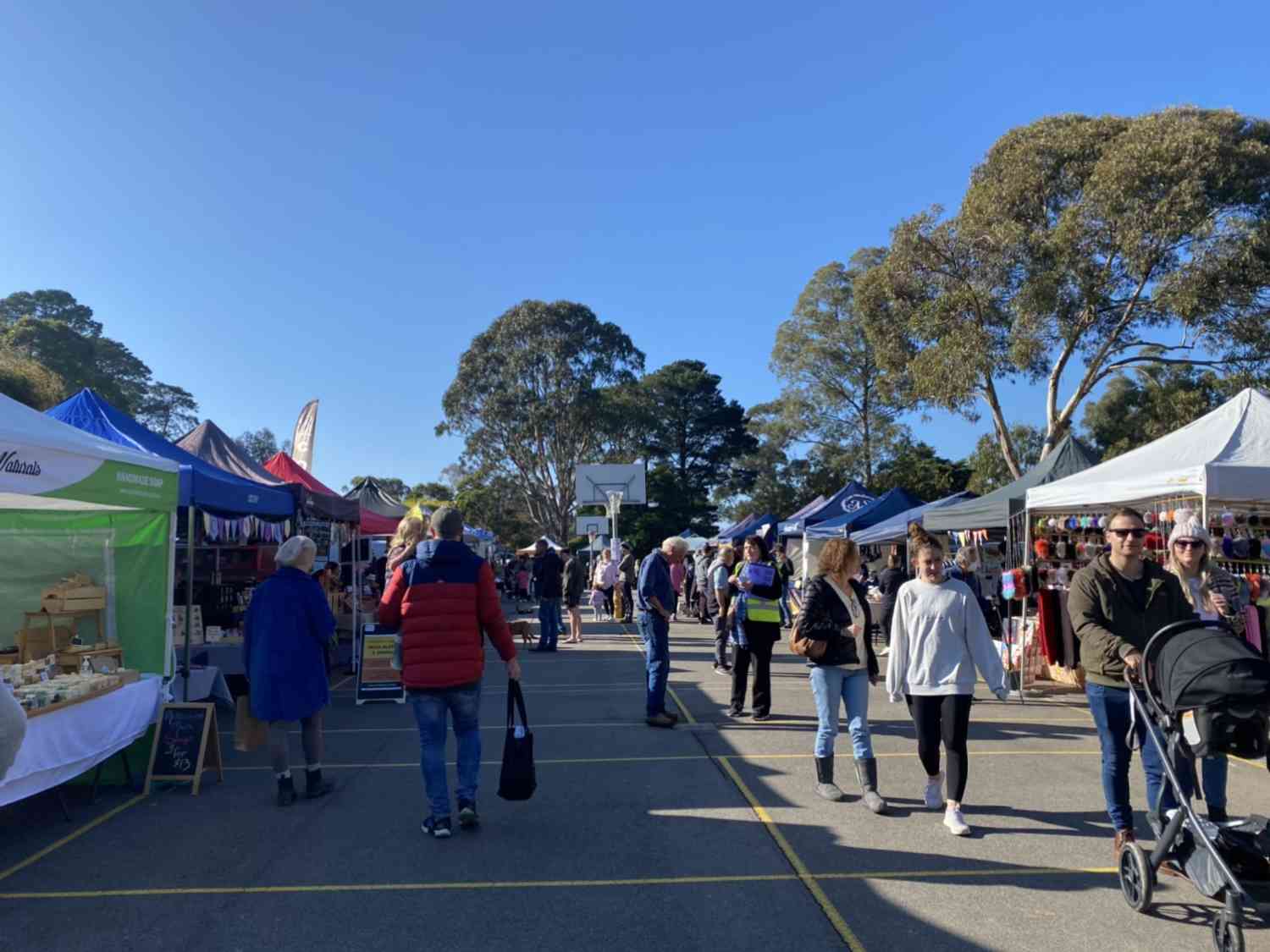 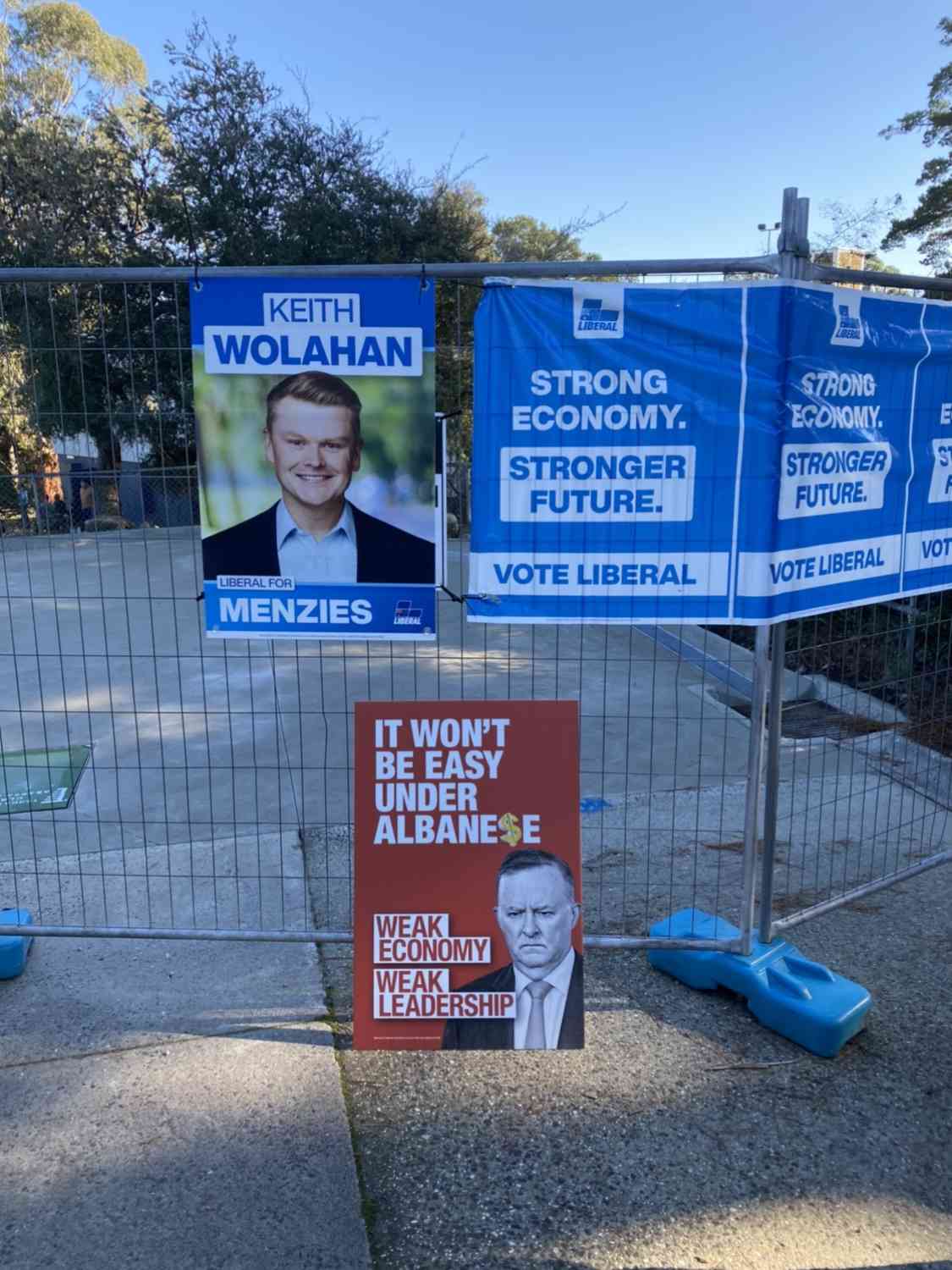 A bit of pre-election slander. As it turned out; Albanese won.

On my last night with the Brooksies we sat down and watched The Greatest Showman starring Hugh Jackman. A solid movie in really good company. Cam and I had been to a few bottle shops trying to find two of my favourite beers: Leffe and Hoegaarden. Both of them are Belgian beers and were unfortunately not available that day. Instead we got Erdinger and La Trappe. The first is German and the latter is Belgium. Solid beer countries with long histories of brewing. I’m not much of a beer drinker and often avoid alcohol. But the occasion called for it and I know what I like. It is always interesting to see how countries differ. In Denmark you can buy alcohol in supermarkets, at kiosks and most anywhere. But just across the border in Sweden you need to go to a bottle shop. The same goes for Australia. Different countries different solutions. 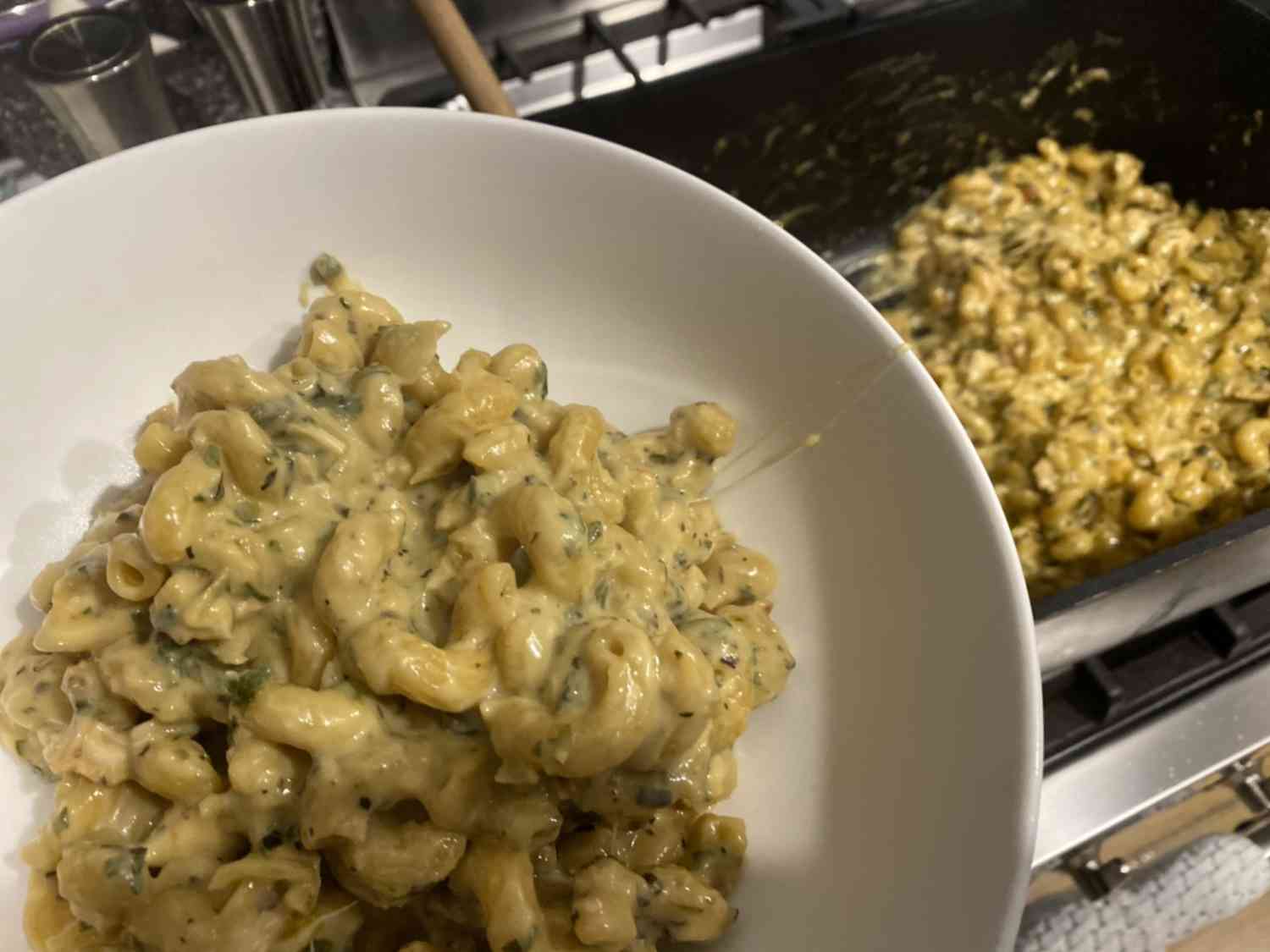 Another of Justine's talents is cooking!! Here: home made macaroni and cheese - WITH CHICKEN!! YES!! :)

The next day when Cam returned from work he offered to drive me to the port. I had spoken with the ships agent who said I was okay to join the ship at 7:00pm. It is no small matter to join such a ship as a passenger. In most cases it would be unheard of and as such it is a privilege. This particular privilege was bestowed upon me by my friend Poul in Hong Kong. He works at ZIM and was hoping to get me on a ship out of Hong Kong after we met back in February 2020. But as we all know, the pandemic got in the way of many things for many people. As such I was delighted when Poul earlier this month told me that Hong Kong based Gold Star Line operates vessels between Australia and New Zealand. Poul then proceeded to make the introduction and that is the short version. The longer version is available in last weeks entry. Within this entry everything was settled and Cam was driving me to the port. While on route I checked my phone and found an email requesting me to provide an official negative ‘PCR test result’. It was 6:30pm. How to deal with this? 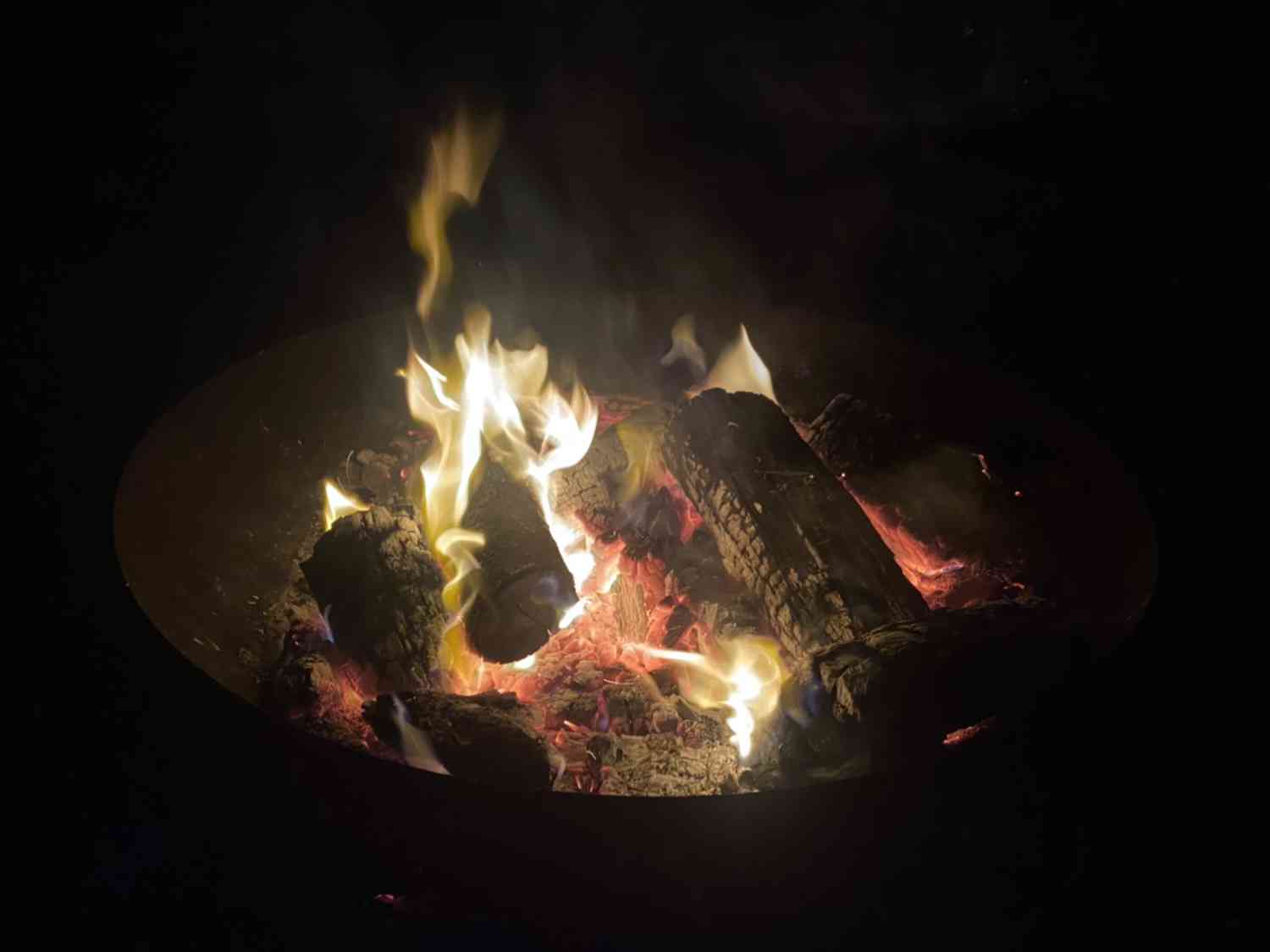 Cam and I pulled over to the side. Overall, I have nothing but good things to say about everyone involved in getting me onboard the good ship. However, something had gotten lost in translation. Parent company, charterers, owners, ship brokers, Hong Kong office, Melbourne office, ships agent…there were a lot of parties involved. The matter of the case was that I was joining the ship in 30 minutes and did not have a recent PCR test result. I had several COVID-19 quick tests kits in my bag but they would not do. Cam and I searched the internet for any nearby clinics but they were all closed or could not provide same day test results. As it turned out, the airport was our only option. The good ship was not leaving until the following day so a small delay was no problem. However, things change and it was better to get onboard asap. Off to Melbourne Airport it was! We arrived at the airport around 7:00pm and I headed straight for the test centre while Cam went to find a parking space. I explained my situation, the staff was helpful, my sample was taken, and I was soon waiting for the test results. 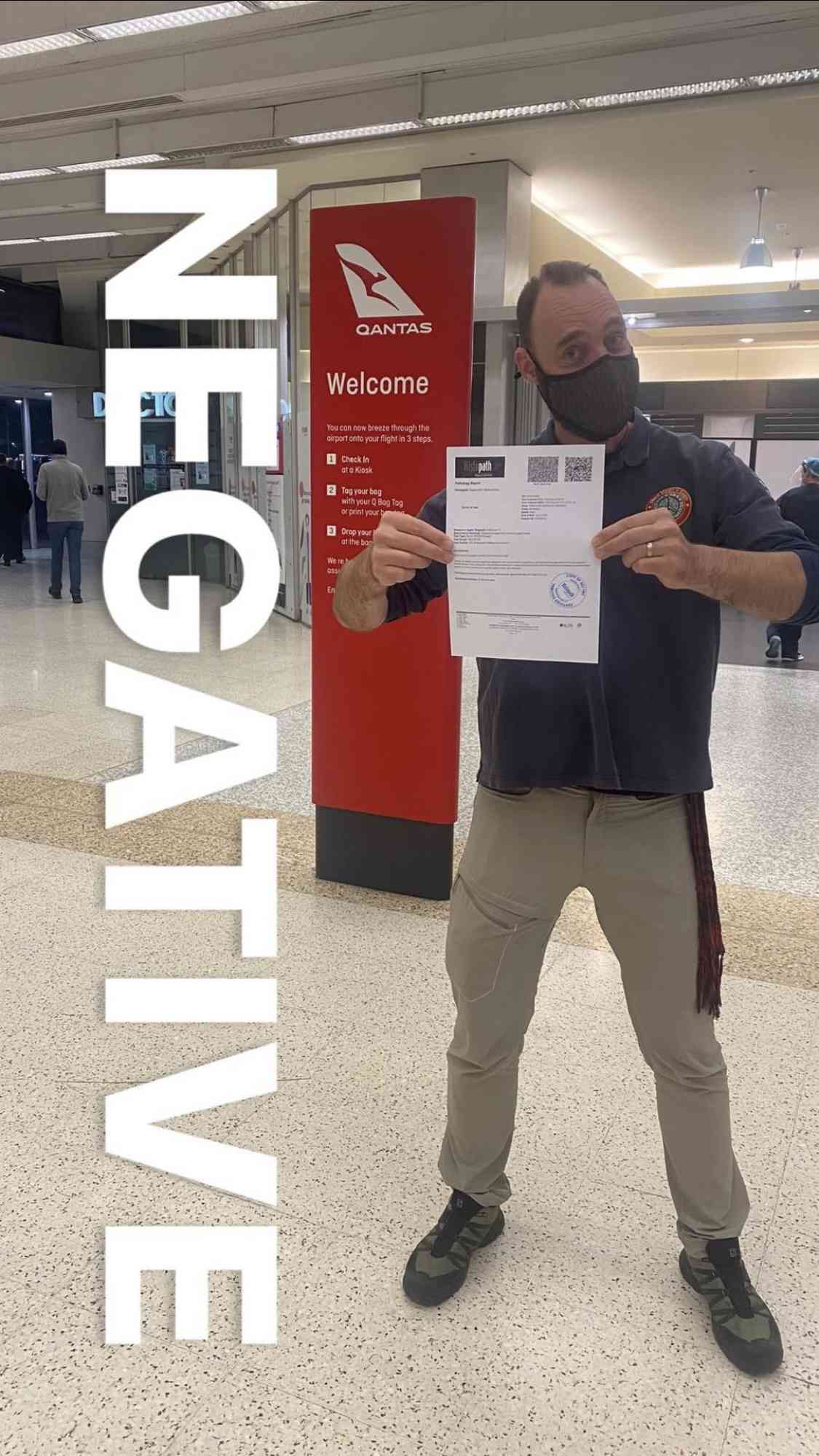 At around 8:00pm I had the result: negative. I wonder if I will ever test positive for COVID-19? I have surely had a lot of close encounters with people who tested positive and my goodness I have had a lot of tests done by now!! But Mr. Negative I am. Off to the port we went. And we reached port security around 9:00pm. Quite impressive I must say, that this only led to a two-hour delay. Port security was kind and we were soon received by the Australian Border Force as well as with immigration. They were really kind and professional as expected. I was cleared, Cam and I said farewell, and I was brought to the ship. It was dark outside as the sun sat around 5:10pm. I was well received onboard by Captain Semeniuk and Third Officer Golovitsky. I was shown to my cabin and had a good night’s rest. The following morning, I stood up, had breakfast, walked down the gangway, and took a picture with the good ship behind me. And later that day we sat course for Sydney on our way to New Zealand. A 16-day voyage in total with eta Auckland on June 7th 2022. To be continued… 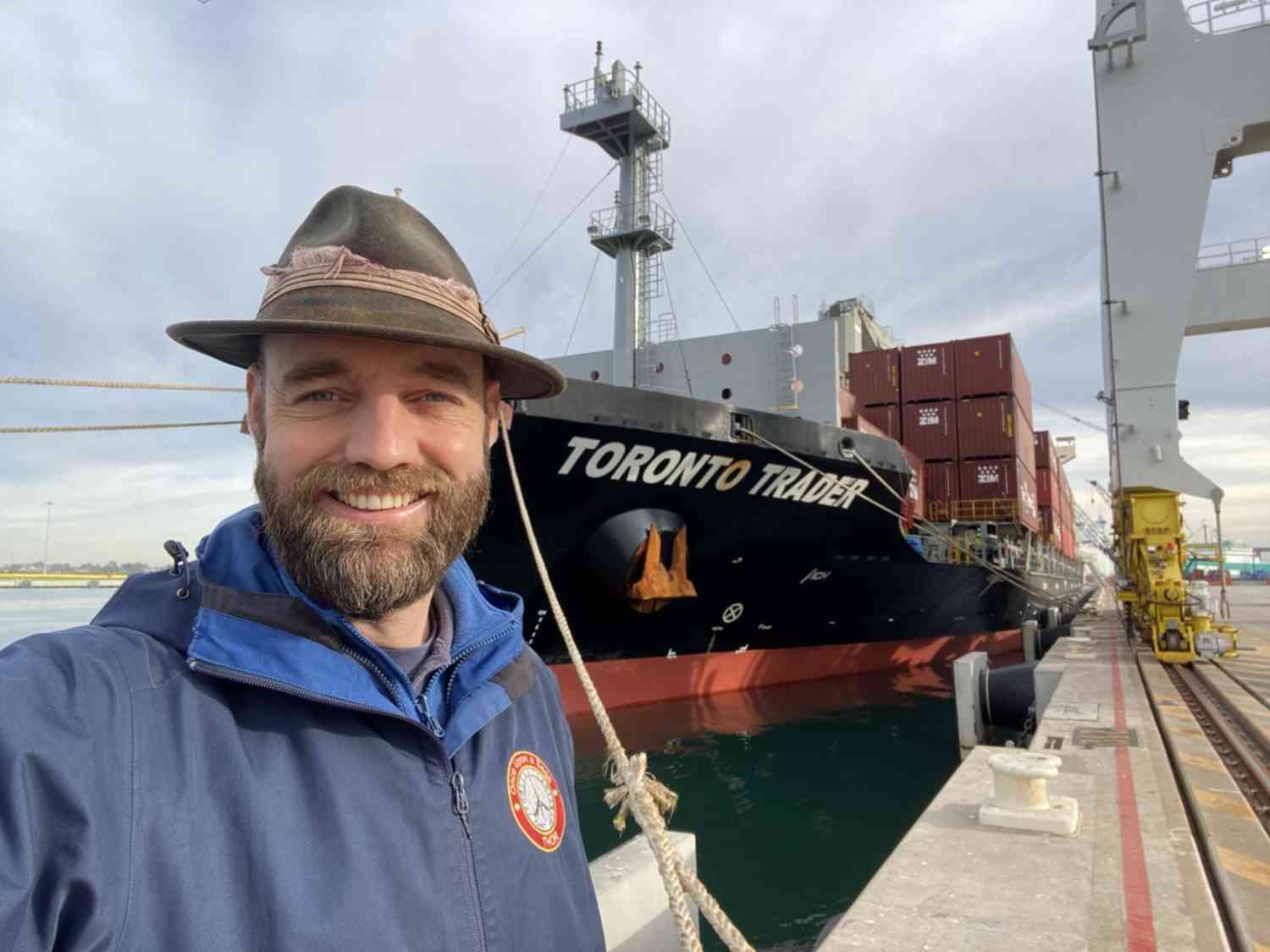