Belize & Guatemala in the hurricane season

Aldous Huxley is often quoted as saying: "To travel is to discover that everyone is wrong about other countries". I've already been to Belize and Guatemala - and it is still true. 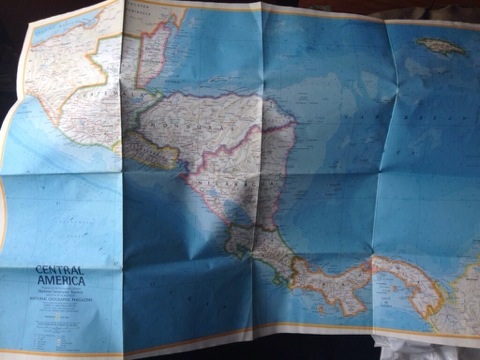 Map from 1973I got into Belize from Mexico without paying anything at all. It is free to enter, but you do need to pay an exit fee. A bus took me to Belize City which is not the Capital but it is the largest and most living city in the country. It is also a city that looks like it could need a helping hand with the  roads, burned-down houses and wooden houses that in general need a lot more than a little bit of paint. But it is alive in a vivid Caribbean way. Yah man. Jammin. 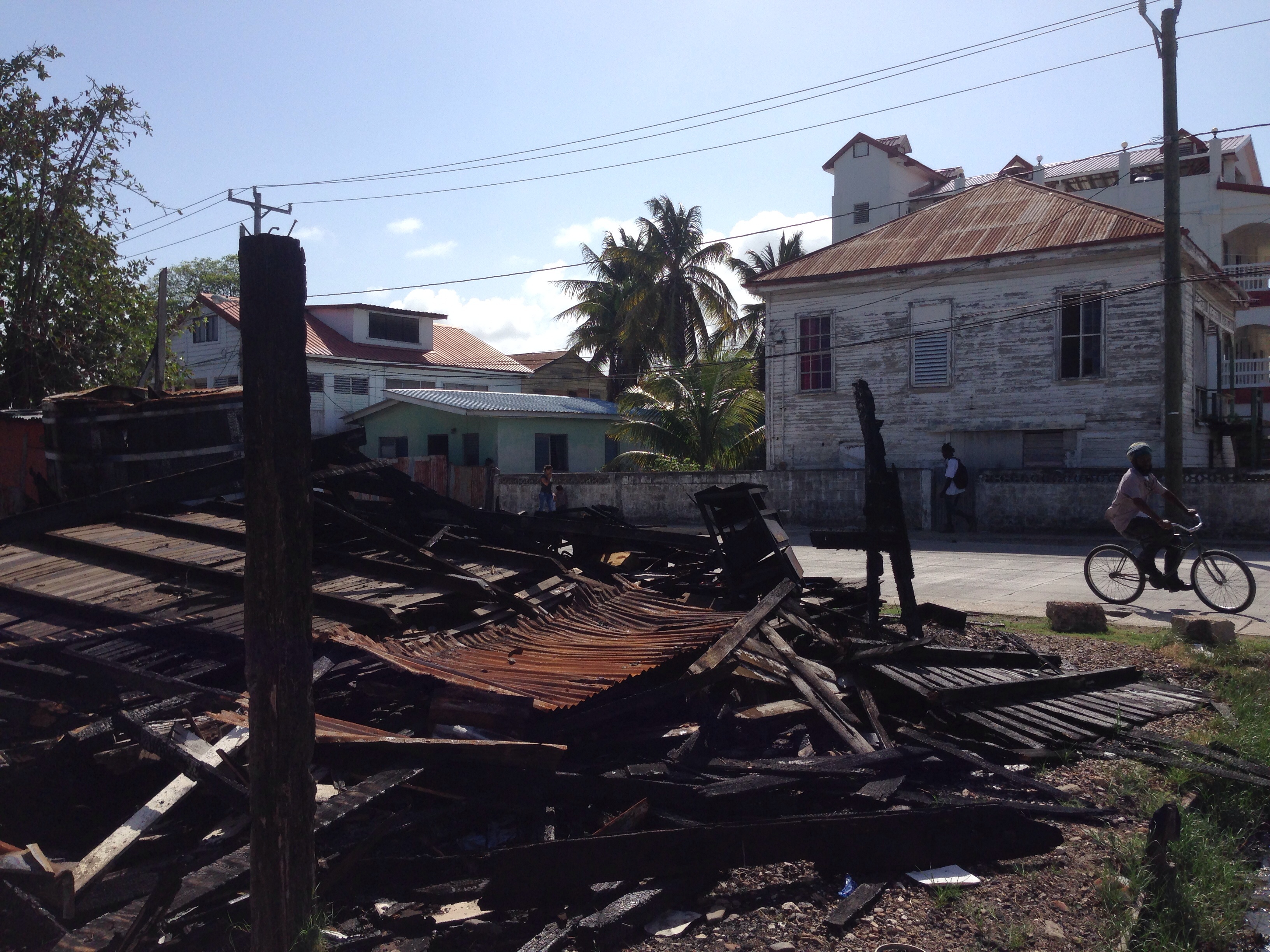 Man bikes past a burned down house. Don't worry be happy now.Belize is PACKED with ancient Mayan ruins and many of the current descendents are from some of the massive Mayan cities that are being uncovered today. It was a very sophisticated society which dates back about 4000 years. It is credited for having the only fully developed written language in the pre-Columbian Americas. If that's not enough for you then have a look at their flag. It's the only flag in the world with people on it.I put this to you: if you spend a week in Belize City and only in Belize City then you will have one view of the country. If you do the same in the jammin almost Caribbean southern part then you will have a completely different view. And if you can keep up then you will have a 3rd and completely different view of Belize if you spend a week inland with the lush forests and spectacular ruins. However Belize is a really small country and you can reach all of this within a few hours. The diversity is compelling. 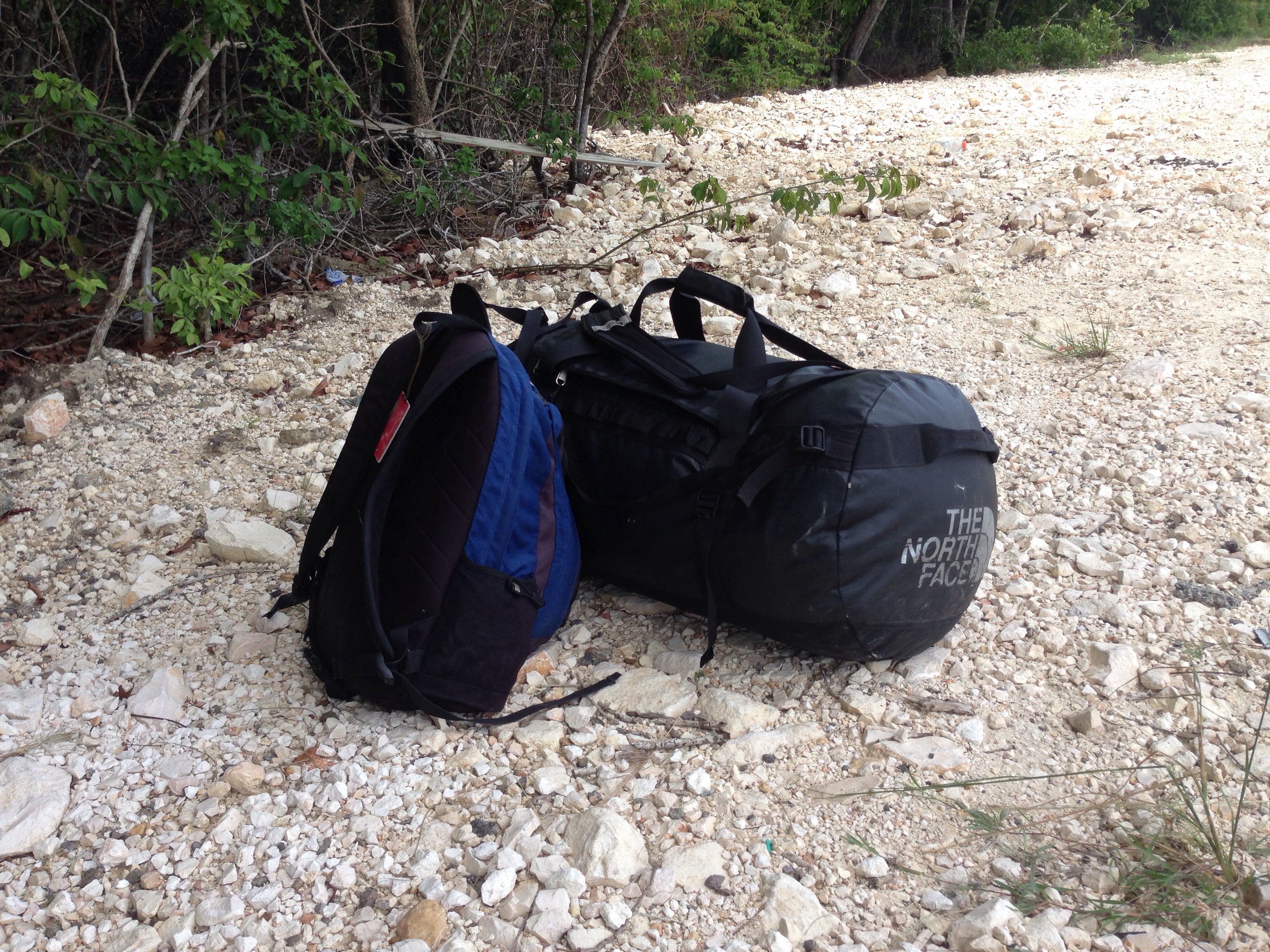 I asked 2 separate men at the bus station if the red bus was the bus taking me inland. After getting about 10km out of the city I discovered the bus was heading back to Mexico. It's all part of the fun and I lost half a day at the side of the road trying to catch a new bus going back to the city.I was greeted by Belize Red Cross like by no one before. They were ready for me on the balcony as I approached the building and the media was there. When I got inside everyone was wearing their Red Cross attire and I was asked to tell a little about my journey so far. Everyone gathered around me and listened while I spoke. I was very touched. Unfortunately the office had recently lost a dear friend and colleague and I was told that this journey which I am on is inspiring. I think nobody will ever know how much that means to me. 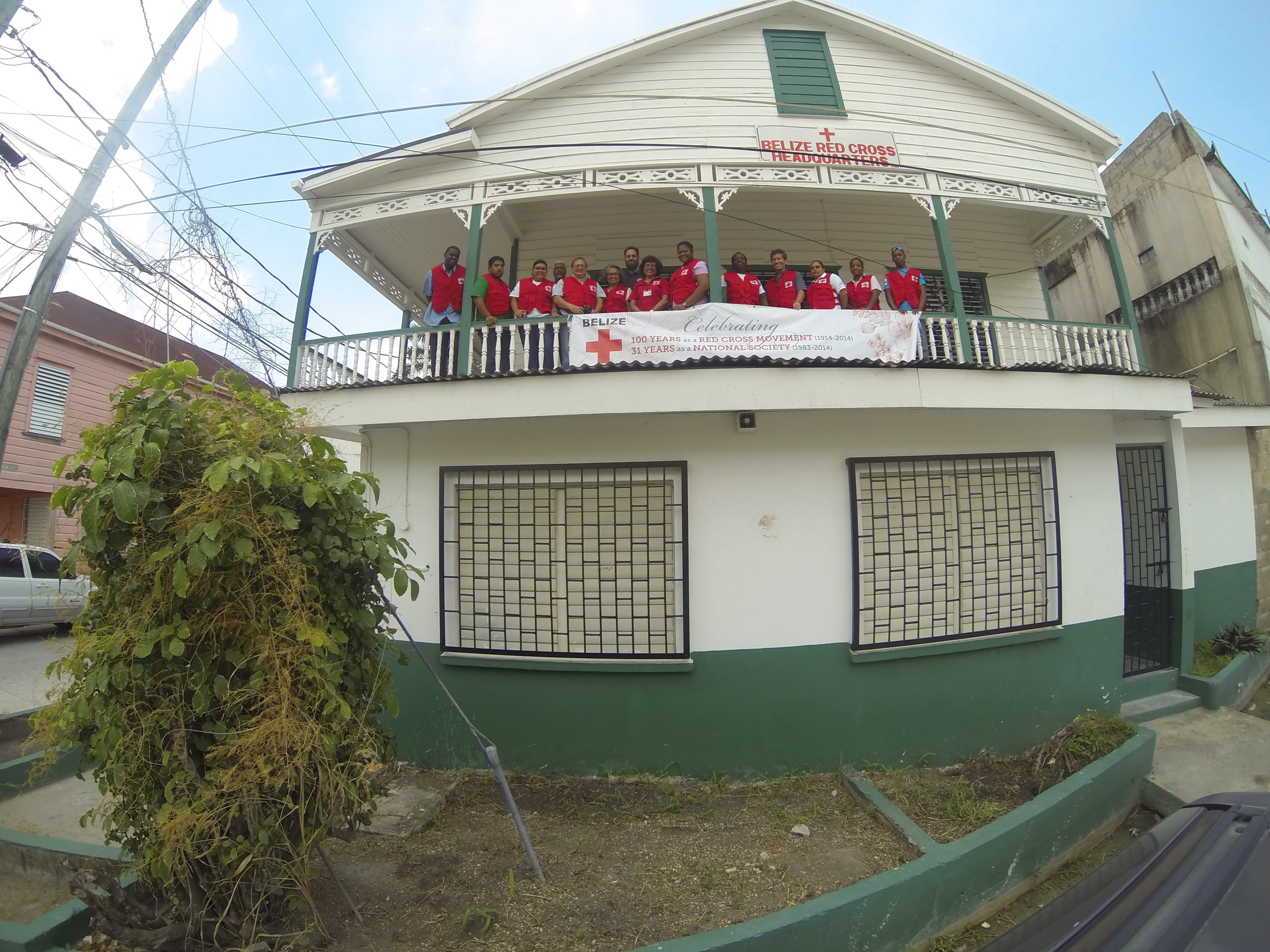 Headquarters for the Red Cross in Belize - amazing people!After leaving the unreasonably hot and humid city and heading towards the border of Guatemala I was aiming for a certain excavated Mayan city called Xunantunich. If you climb to the top of the 40m high temple then you can see right over the treetops and into Guatemala. 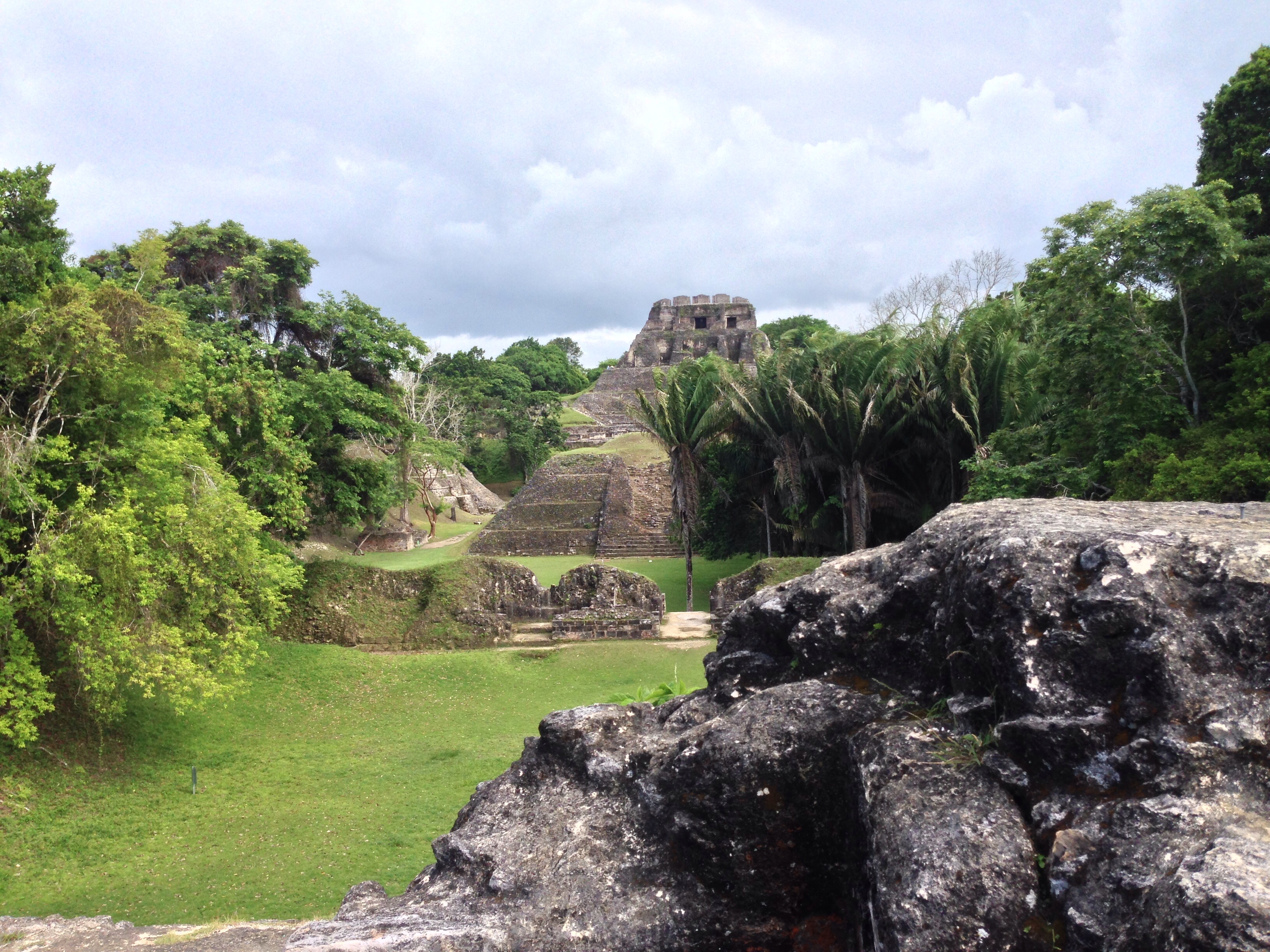 Xunantunich Mayan ruins.The bus driver stopped the bus and let me know that it was time for me to get off. I got off and the bus continued. I had a look around and I could neither see any temples nor anywhere I could sleep for the night. But a friendly woman who also got off the bus pointed me in direction of a small farm down a dirt road and said that I would find accommodation there. It was the most beautiful and peaceful place I could ever wish for. Green grass. Trees with flowers. Horses. No traffic. The farm or guesthouse as I should call it was very well kept and beautifully detailed. I couldn't find the owner but I met 2 guests who immediately became travel buddies. Matt from the UK and Siobhan (pronounced Chevan) from Canada. 2 of the most lovely people who seemed to understand how to enjoy traveling. 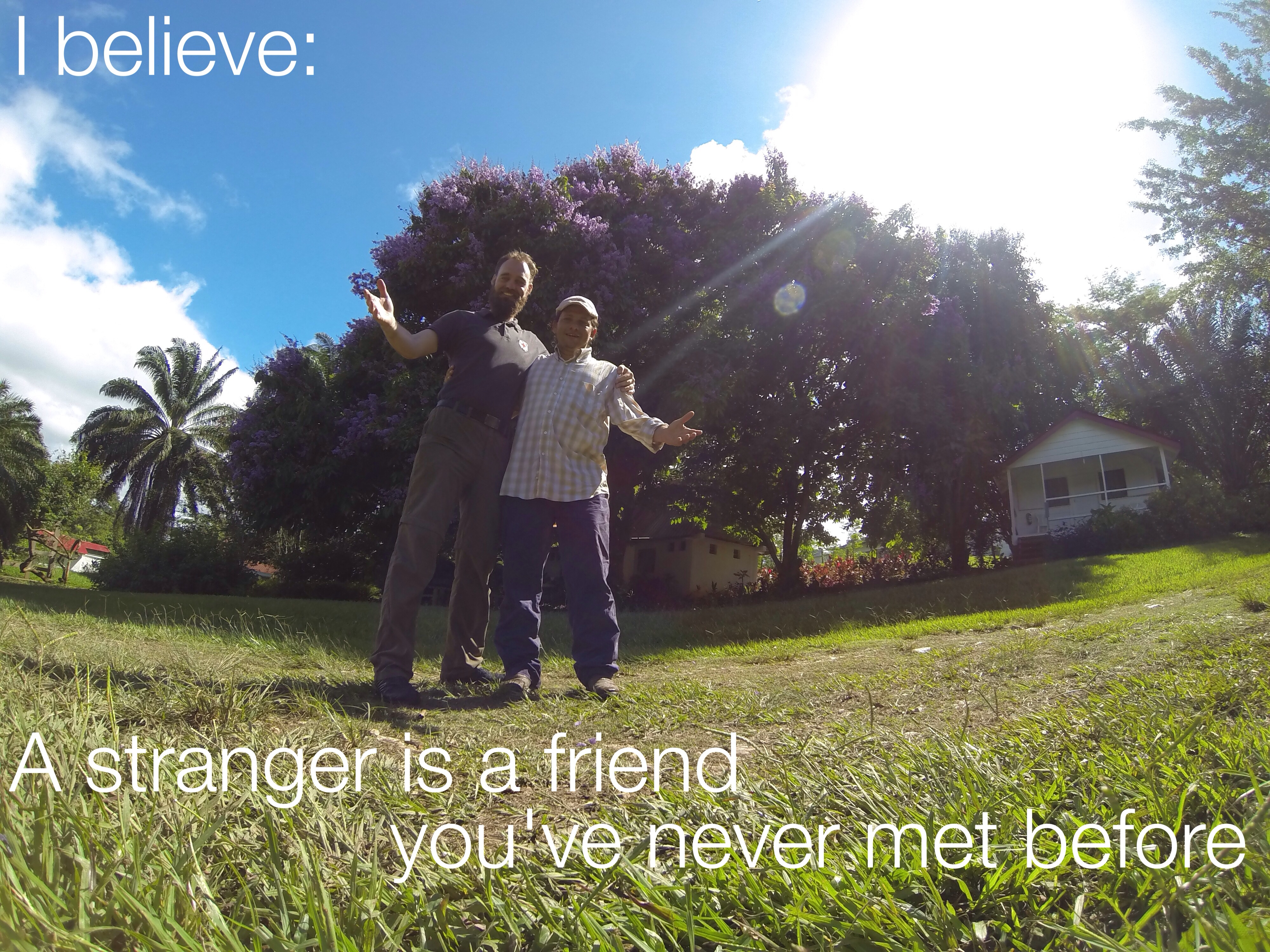 Santiago is such an interesting person! I'll be back! Check out www.hannastables.comThen Santiago showed up. He is the owner and he immediately sized me up and then invited me to join everyone for lunch. Although I had to sit in the back of his pickup truck for the ride. Gold!! I don't know what it was with that ride in the back of the pickup truck but I felt the same sense of happiness that I got from sticking my head out of the train in the Balkans. It's hurricane season in Central America. Most of the time we have blue skies and unbelievable heat combined with high humidity. But pretty much everyday we get rain. Yeah, not the rain you get. I mean: WE GET RAIN!! But it's warm rain - so that's okay. Although I feels like I can't remember the last time I felt dry. Or that anything I own was dry. Everything is constantly humid. 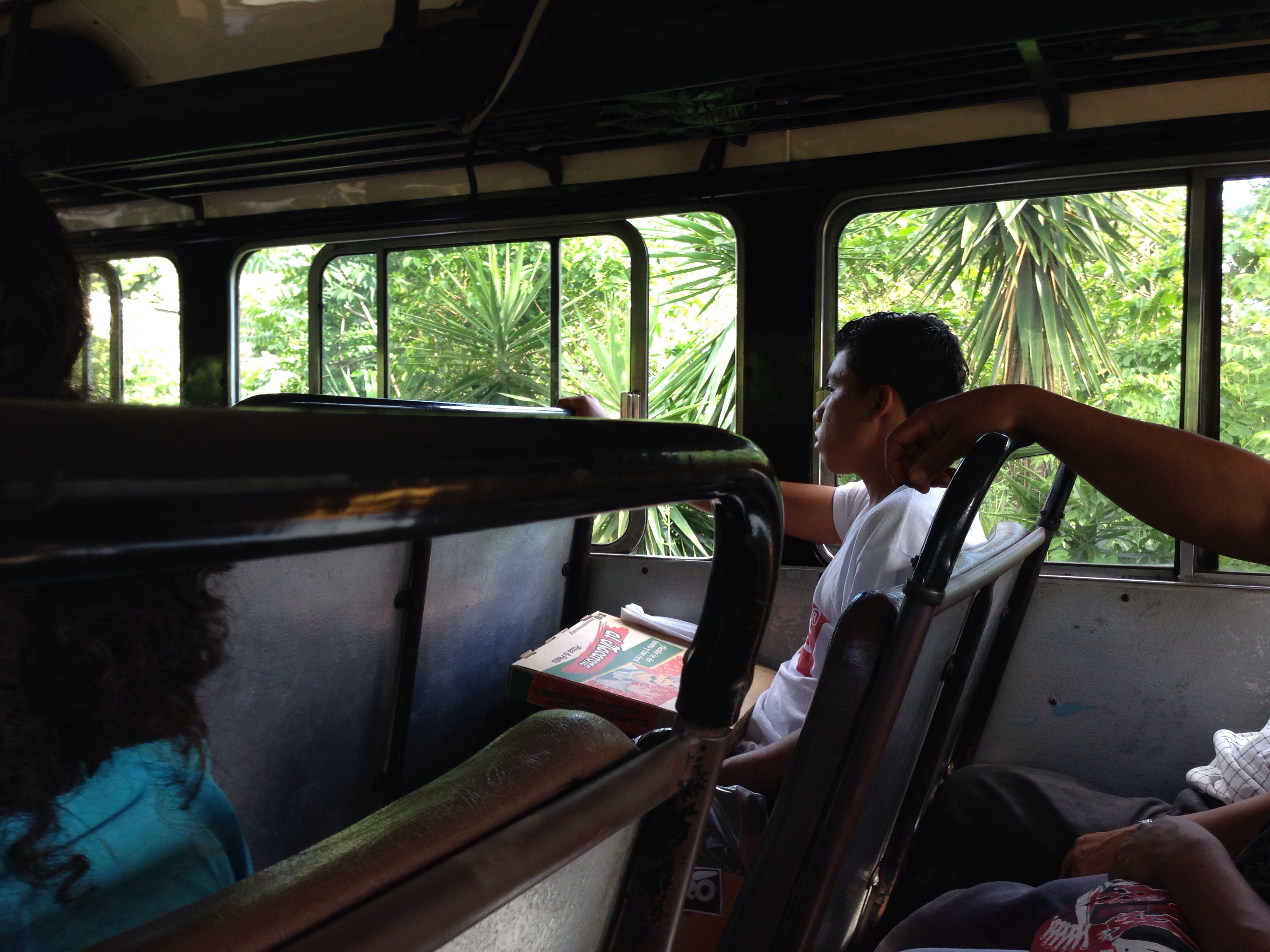 Busing it through GuatemalaSome people probably think that I am on a paid vacation here. But it feels like work a lot of the time. But it is a job that I enjoy. I try to stick to the dkk 100/day budget (usd 20/day) and that means that everything takes more time because you rarely get the best offer for anything the first time. I also write a lot. I need to contact many people and stay in touch with others. I need to investigate, book, sleep, eat, move and start all over the next day. I have seen wonderful things and met so many people that have changed my life. If this journey takes my life (and that's not a part of the plan) then it is all worth it. Having said that I so so so so need a rest now and I am planing to give myself one very soon.Guatemala:I absolutely love Guatemala! It is such a beautiful country with vast jungle climbing up the hill sides, lush fields, men in shirts and cowboy hats. Actually I would say that although the roads are good and the infrastructure is fine you would easily be able to fit a horse into your household unless you live in the city. This is so very much horse country!One of the world's most famous Mayan sites is called Tikal and can be found in the north. I met a great guide there in 2012 and we stayed friends since then. 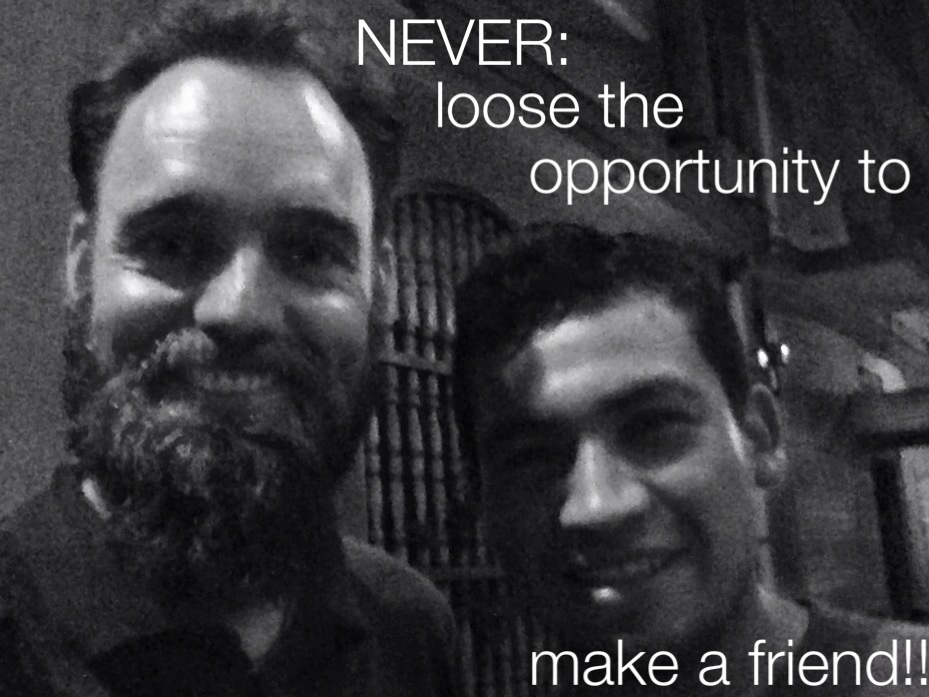 Elmer and I met for beer 2 years after we met the first time and he told me that I'm his first guest ever to do so :)I crossed the border together with Matt and Siobhan. Another border crossing that didn't take much time and went smooth. I Guatemala we avoided all the expensive tourist trap taxi's at the border and walked for a little while until we reached the bus terminal. That is pretty much standard procedures now. The 3 of us made it to Flores which is a unique city in the north of Guatemala near Tikal. Flores is a town which is limited in size by the island it sits on. It's in a large lake and there is a road that leads to and from the island which gives it an appearance almost like a castle with a moat. In Flores we parted after 1 night and I continued south to Guatemala City which is the capital. It's a busy city with limited wifi opportunities but you can always find an intent café. After a night in the city I was already off to El Salvador. 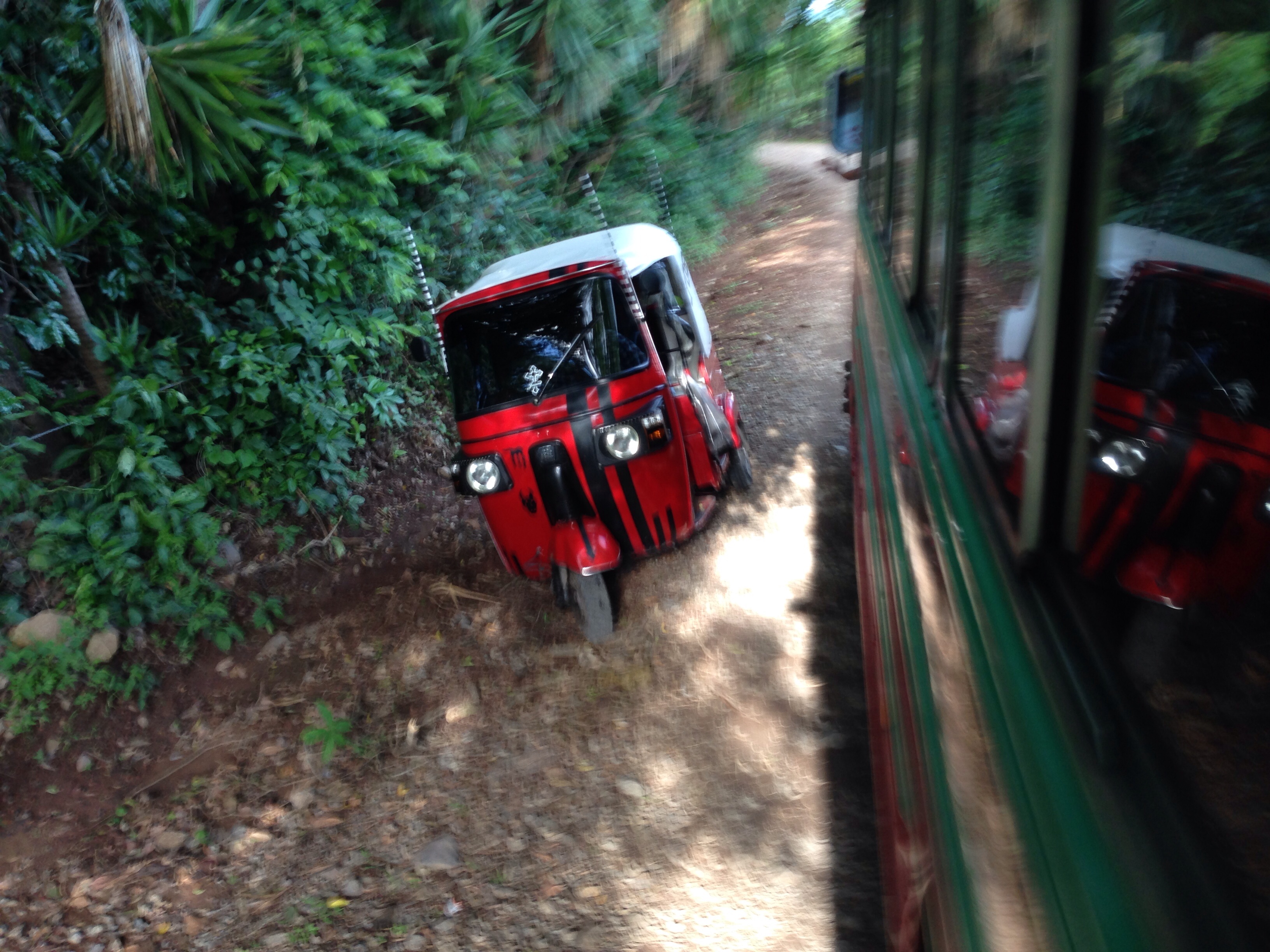 For unknown reasons our bus went off the main road and into a narrow dirt road up a mountain side. The detour lasted about 20 minutes and included pushing a tuctuc off road :)It was a short run for me in a country that I hold so dear in my heart. Perhaps I love it so because I have already seen more. The last time I was in Guatemala I was on a motorcycle and had a crash that was nearly fatal. That's not the part I love. I love the nature, the friendly people, the food and the possibility to find it everywhere. The countries history is full of revolution, conflict, warm blooded passion and a cry of life. The culture is deep and profound and is in it's own way unmatched by any country in the world. You could live a life in Guatemala and be happy. But for many that is not the reality. Unfortunately Guatemala is a part of the drug route from south to north and that brings cartels and struggles for power to the beautiful nation. Every country has a downside and with Guatemala it is mostly due to human nature. 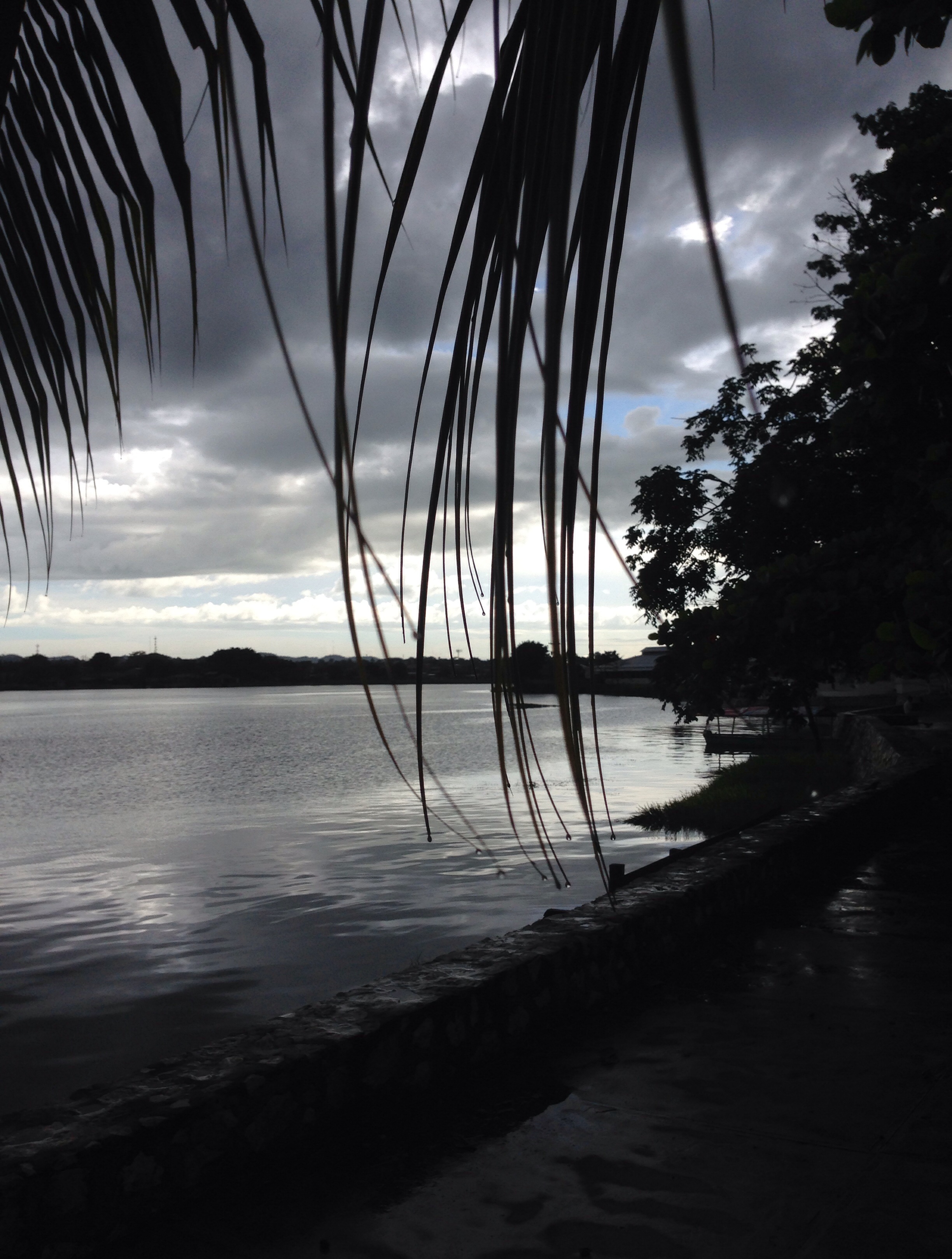 You will never understand the beauty of Guatemala. You're better off dreaming about it ;)I however see no reason not to visit Guatemala, swim in the sea, hike the volcanoes, ride the horses, enjoy the sun, discover the temples, bathe in the waterfalls, feast on the food and make a new friend. Because I have visited Guatemala twice; and I only have good to say about what I saw. 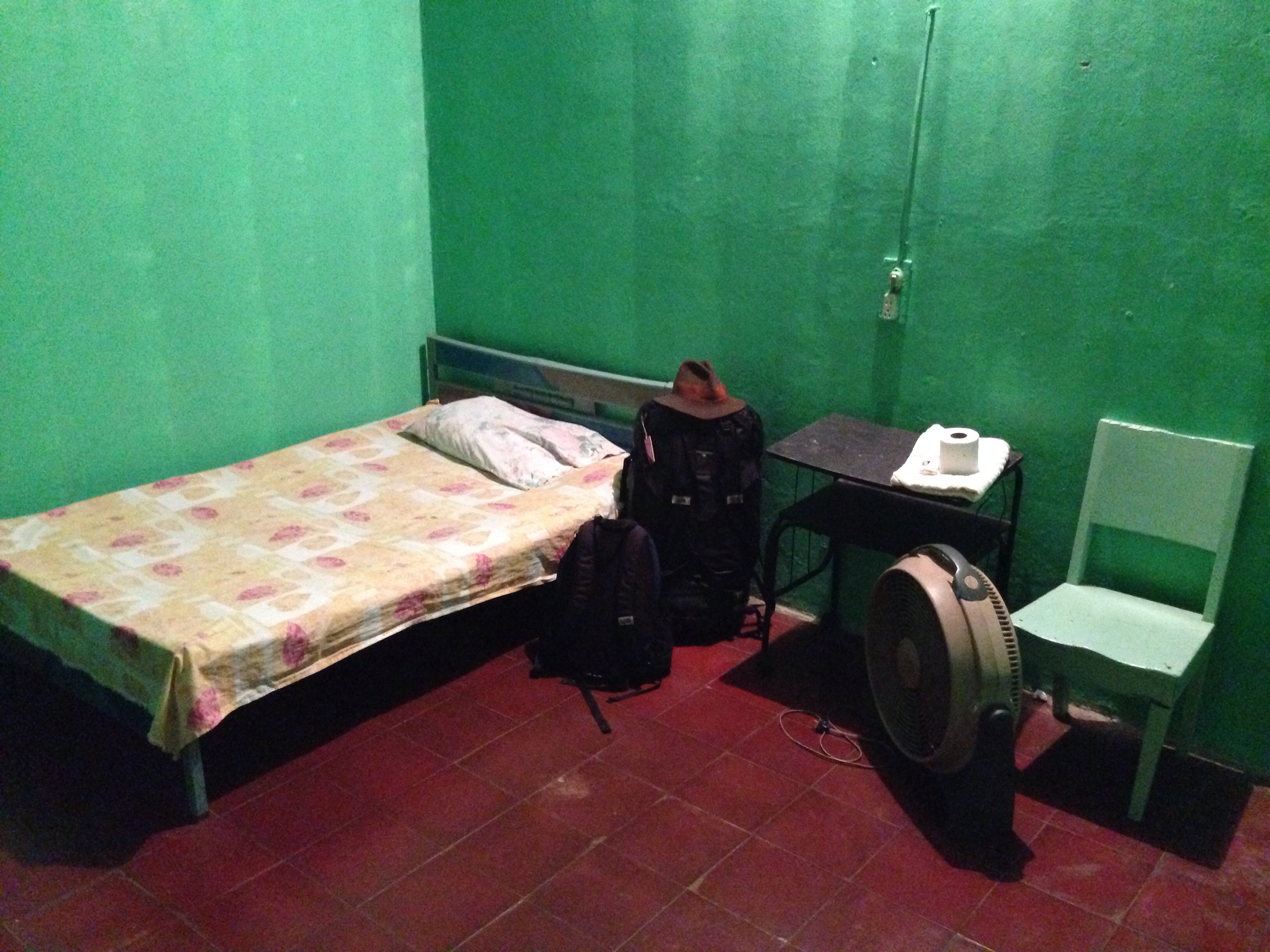 Once I crossed the border into El Salvador I was stuck until the next day and had to sleep in this damp, hot overpriced room. But I'm close to being on budget! ;)Best regardsTorbjørn C. Pedersen (Thor) - enjoying the hurricane season