Is Vanuatu the best country in the world?

Best country in the world?

Ultra-wifey is in Vanuatu and I would much rather be spending my time with her, than taking out a full day of writing you. I hope you are on the same page with me on that. So, here is a short one. Enjoy.

The rather violent seasickness of last week had me off balance for a few days. That surprised me a bit. I thought I would have recovered swiftly. Once in Port Vila I checked into a hotel ultra-wifey and I had booked. I had a night there ahead of her arrival. The following morning Mali from Tropical Agencies Ltd gave me a tour of the capital so I could gain my bearings. And then I was off to pickup ultra-wifey from the airport. Her flying in to Vanuatu became the 25th visit on her part during the Saga. With 52 weeks in a year, we have been wondering if we might have spent a full year together out of the past nine? She is an amazing woman and I’m always happy to see her. Vanuatu greeted her with four days of nonstop rain. We made the best of it. We always do. With five months since her last visit, we had a lot of catching up to do. Sure, the internet is wonderful for staying in touch. But it doesn’t beat having a face-to-face conversation. 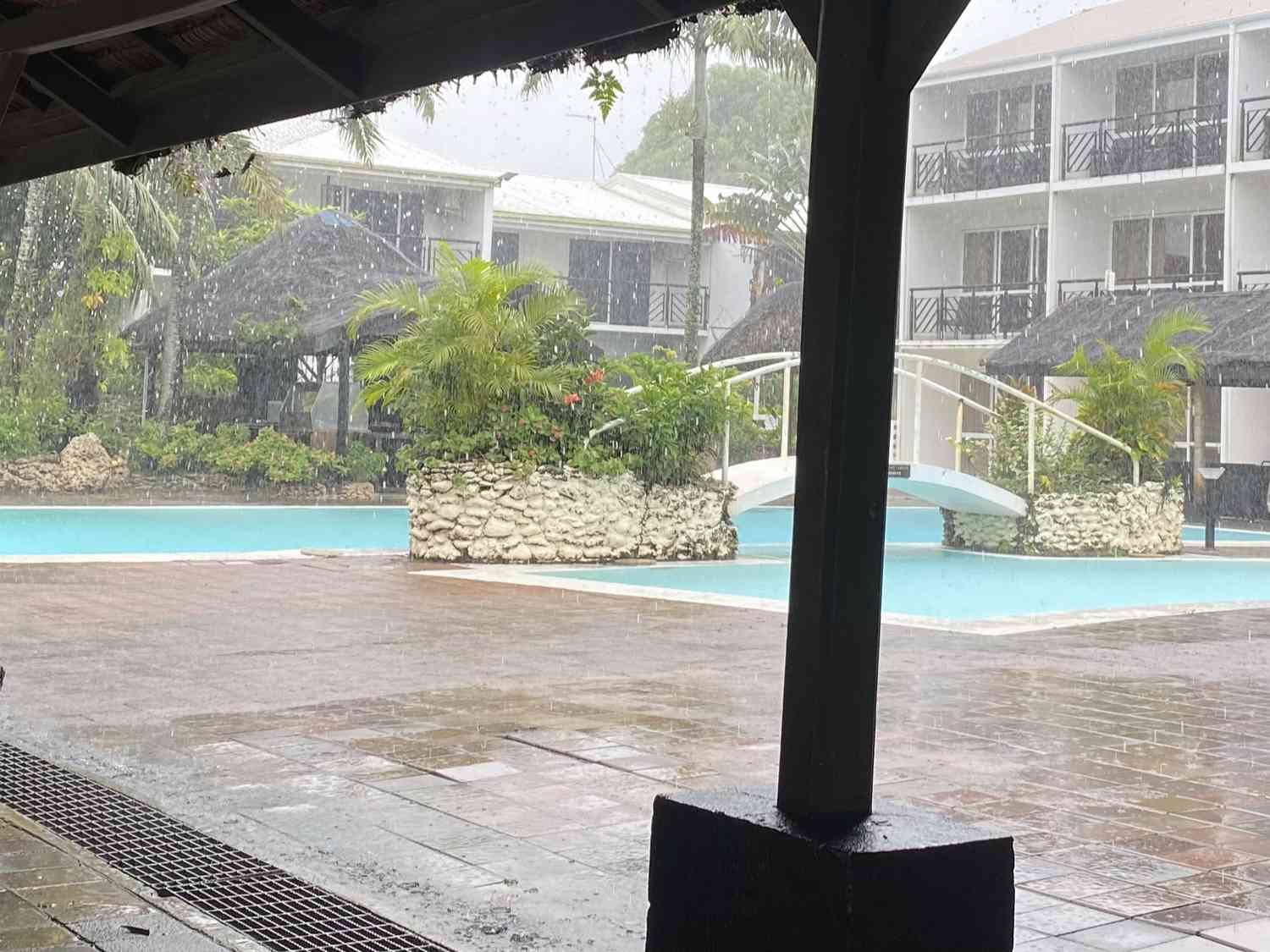 While the rain gets you wet it has still been at least 25 degrees Celsius (77F) and a humidity of around 78%.

Within Once Upon A Saga, I aim at promoting the positive and the interesting of every country. The thinking is that every country in the world is the best country in the world to someone – so I should look for that angle. There’s also the entire “to counter the daily negativity in mainstream media” thing. I have seen more of this planet than most. It has shaped my world view and I fully recognize that the world is not a perfect place and that we have much work ahead of us. But overall, it’s a lot more friendly, peaceful, and normal, than most people give it credit for being. Most people enjoy hearing me praise their country for the good it contains. Over time I have also noticed that a lot of people do not like to hear me praise other countries. Especially rivaling countries. And there is a lot of friendly reviling out there. A definition of a developing country is: “a poor agriculture country that is seeking to become more advanced economically and socially”. Most pacific island nations would classify as developing countries and as amazing as they are, it often makes things more difficult. That extra element of difficulty is something I find charming – yet at times down right annoying. There are a few things ultra-wifey and I have been wanting to do in Vanuatu and it seems it won’t come into fruition due to complications you wouldn’t have in a developed country. 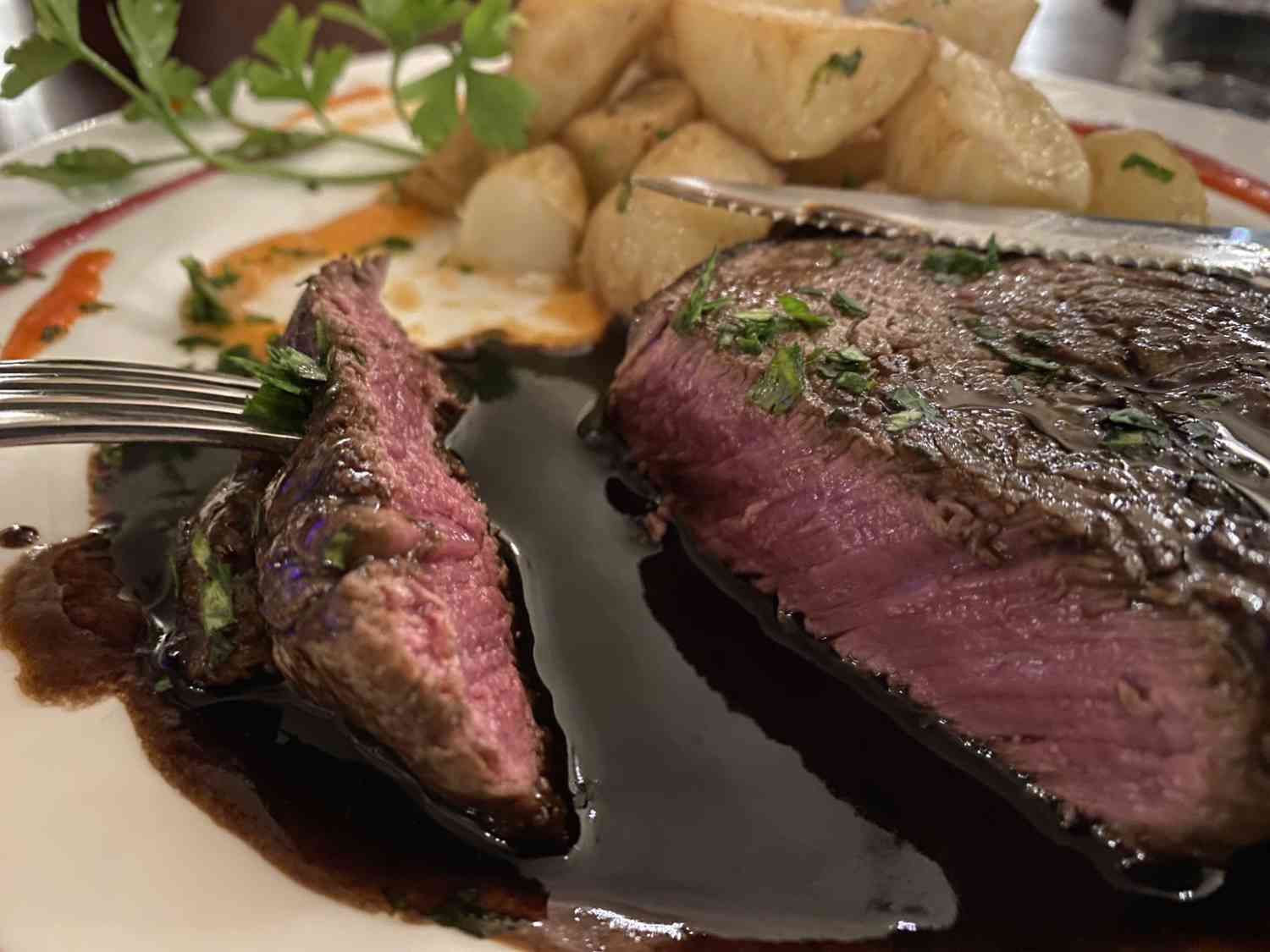 I had this beef at Ristorante Casa Mia and it may very well have been the best I've ever had!! Two days later ultra-wifey ordered the same and it was less juicy and more chewy.

If you read through the website of the Vanuatu Tourism Office then you will have no doubt that Vanuatu is the best, or at least one of the best, countries in the world. World-class this, and world-class that. Ultra-wifey and I joined a half day trip and our guide (Alfred) was a formidable ambassador of Vanuatu. He spoke a lot and it was just pure praise for Vanuatu. Best food in the world, the best people, most safe, best scenery, best communities, best culture, best farming practices, best social structure, best wildlife, best, best, best… Alfred did however acknowledge that Fiji has more islands than Vanuatu. Kidding aside Alfred did a really good job. And as a guide he is supposed to point out all the little wonders of Vanuatu. I’m sure Alfred was correct when he mentioned the high quality of locally grown food crops and the health benefits which comes with it. I’m not sure that the life expectancy of Vanuatuan’s is as high as ninety years? While there are many differences between the pacific island nations there are also many similarities. And it is all connected despite distance and rivalry. There is a certain understanding between pacific islanders. And there is a lot of pride. A friend of mine visited Vanuatu some time ago, fell sick, went to the hospital, and wrote a blog about his experience. I don’t think my friend was overly critical – he was just realistic in his descriptions. The comment section of his blog is full of death threats! It is also possible that those commenting were merely hungry as this pacific paradise practiced cannibalism as late as within my parents lifetimes ;) 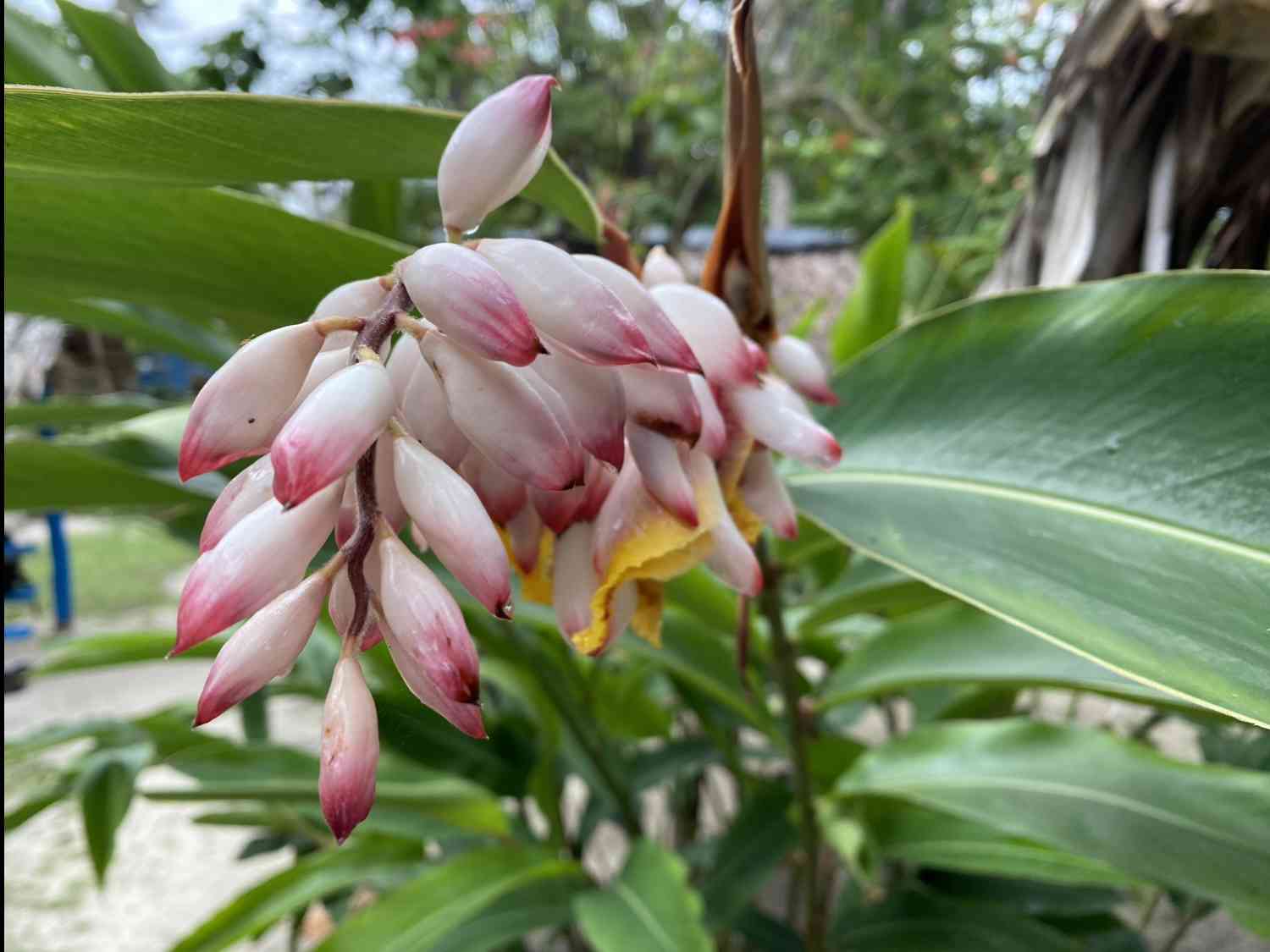 The beauty of Vanuatu is truly something. Ultra-wifey and I have been wanting to do a demanding full day hike we read about. But we need a guide and nobody seems to be offering the hike. It has been a struggle trying to get a hold of anyone who even knew the hike. But we managed. And it has been even harder to get a guide. We are still trying.

Yeah – as a foreigner in a country you are a guest. And as a guest you should stay polite and grateful. You should not be judgmental and demeaning. That doesn’t mean you cannot be realistic. So, is Vanuatu the best country in the world? Sure – there is much to praise: amazing meat, spectacular scenery, safety, kind people, diversity, authentic culture, fresh produce, curiosities etc. Vanuatu is as much the best country in the world as any other country in the world. It’s a silly comparison of countries anyway as you would need to define your parameters and in many cases it would be subjective. Yet, people keep asking what the best country in the world is? Great news for Vanuatu is that they are about to reopen for cruise ships. It’s a huge industry for Vanuatu which the country has not benefitted from in more than two years. Vanuatu used to have between 10-15 cruise ship calls every month! That declined to zero during the pandemic. But Vanuatu is now open for business again and the first cruise ship is due to arrive in November 2022. They typically stick around for less than a day hence daytrips are abundant. Okay – the rest will be in photos with captions. Enjoy. 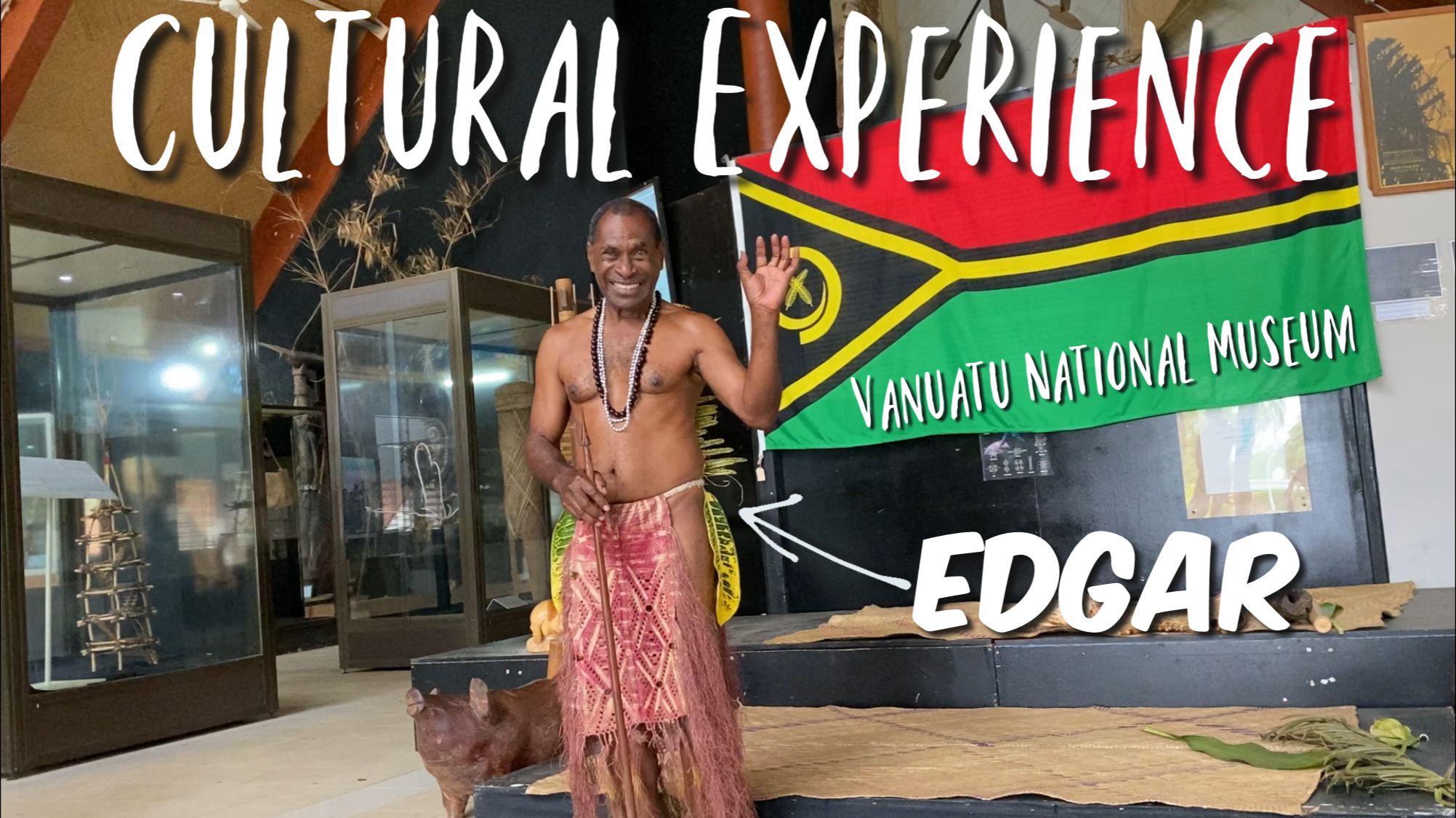 Edgar at Vanuatu National Museum is a national treasure!! Take your time to find out why right here (or click on image). 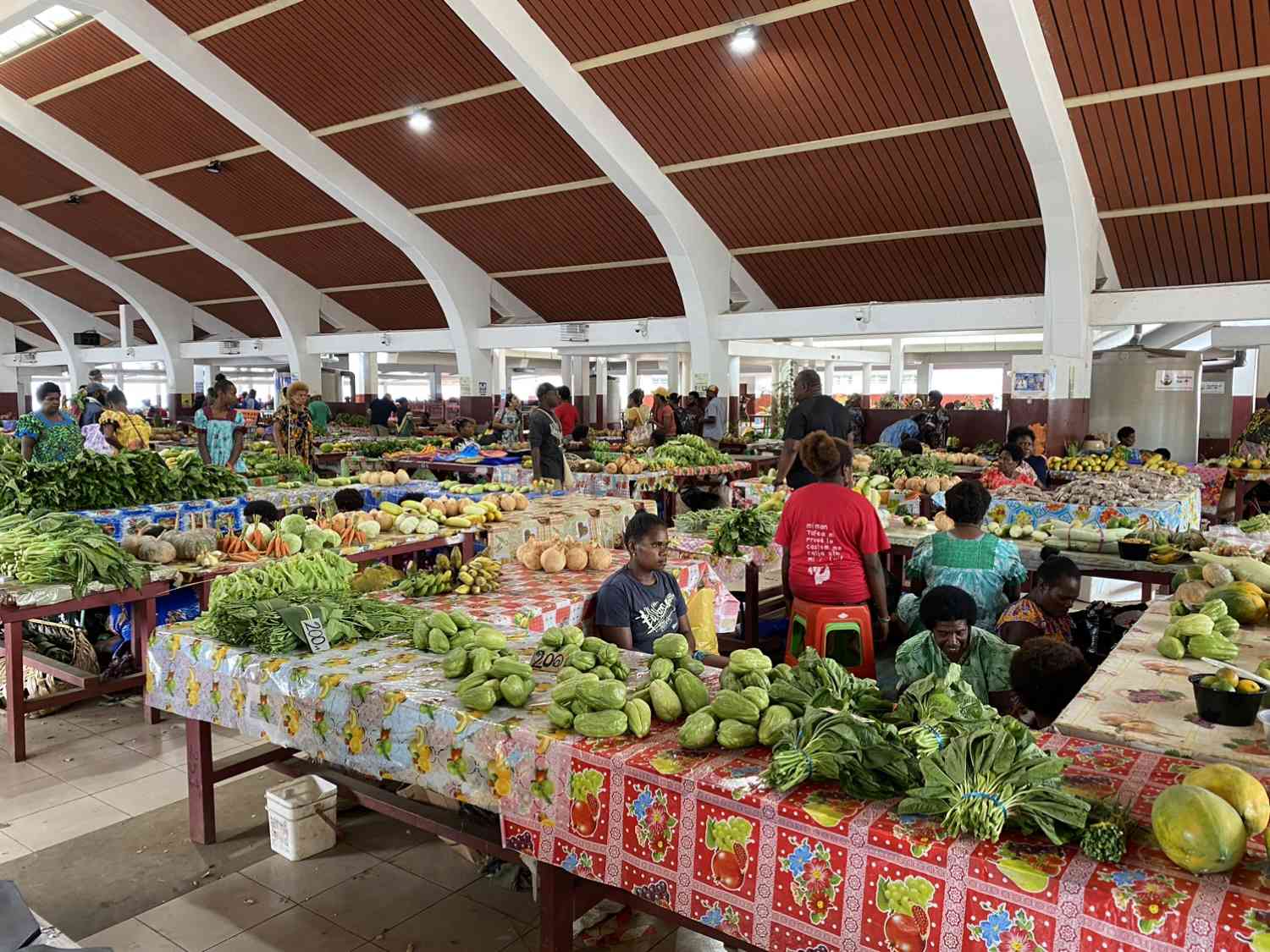 At the local market in Port Vila you can find fresh produce and get a delicious fish or beef meal for just 500 vatu (usd 4.00) 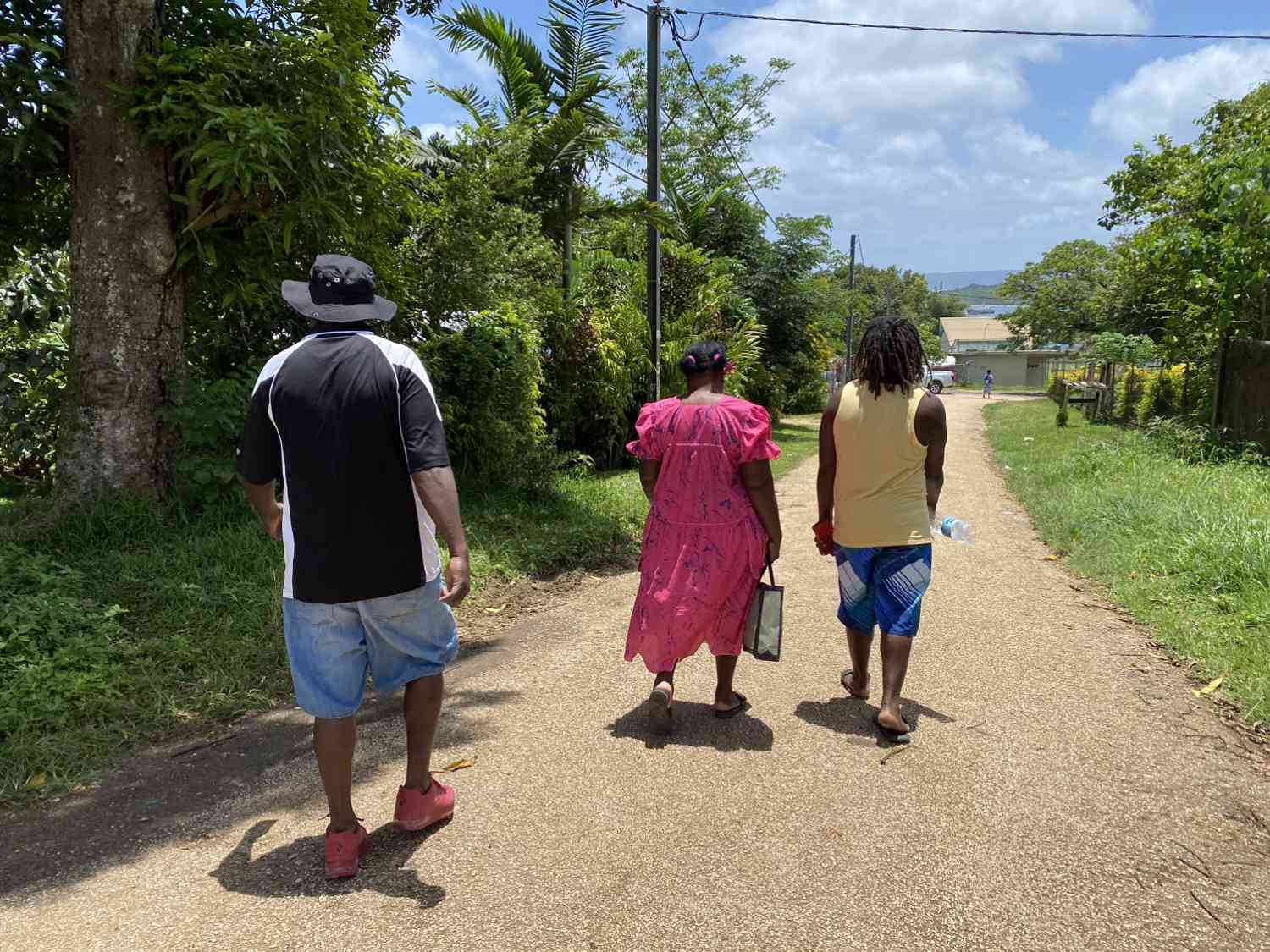 It has been raining a lot. But not all the time. So we've had some time to explore on foot. 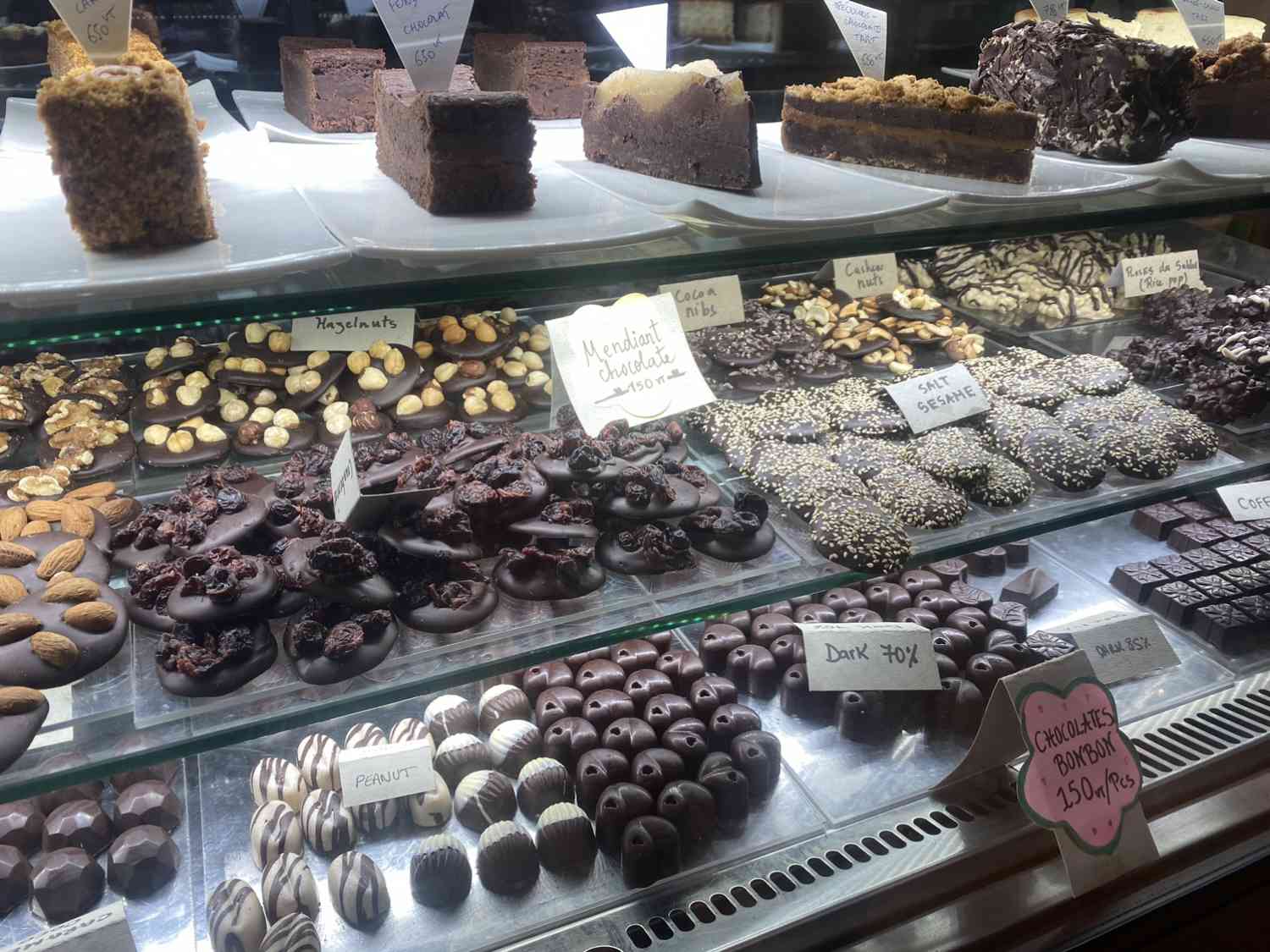 A friend of my sister recommended a few things. A guided tour at the local Tusker Brewery as well as visiting the Belgian "Gaston Chocolat - Vanuatu Chocolate". The brewery is no longer offering guided tours. But Gaston Chocolat was well worth the visit. 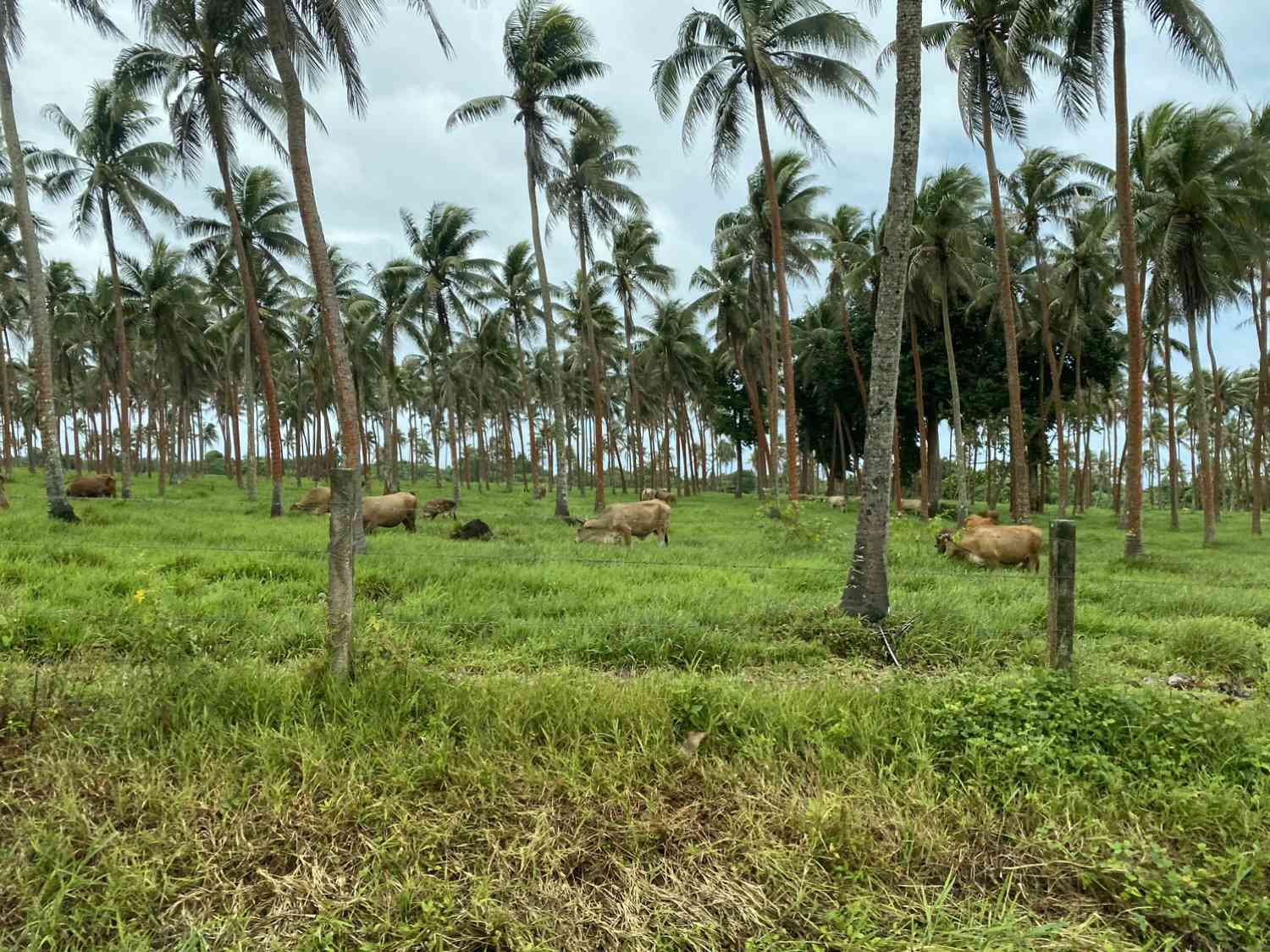 No wonder the beef is great!! Cows are only raised for their meat. Not for dairy products which are imported to Vanuatu (typically from Australia). 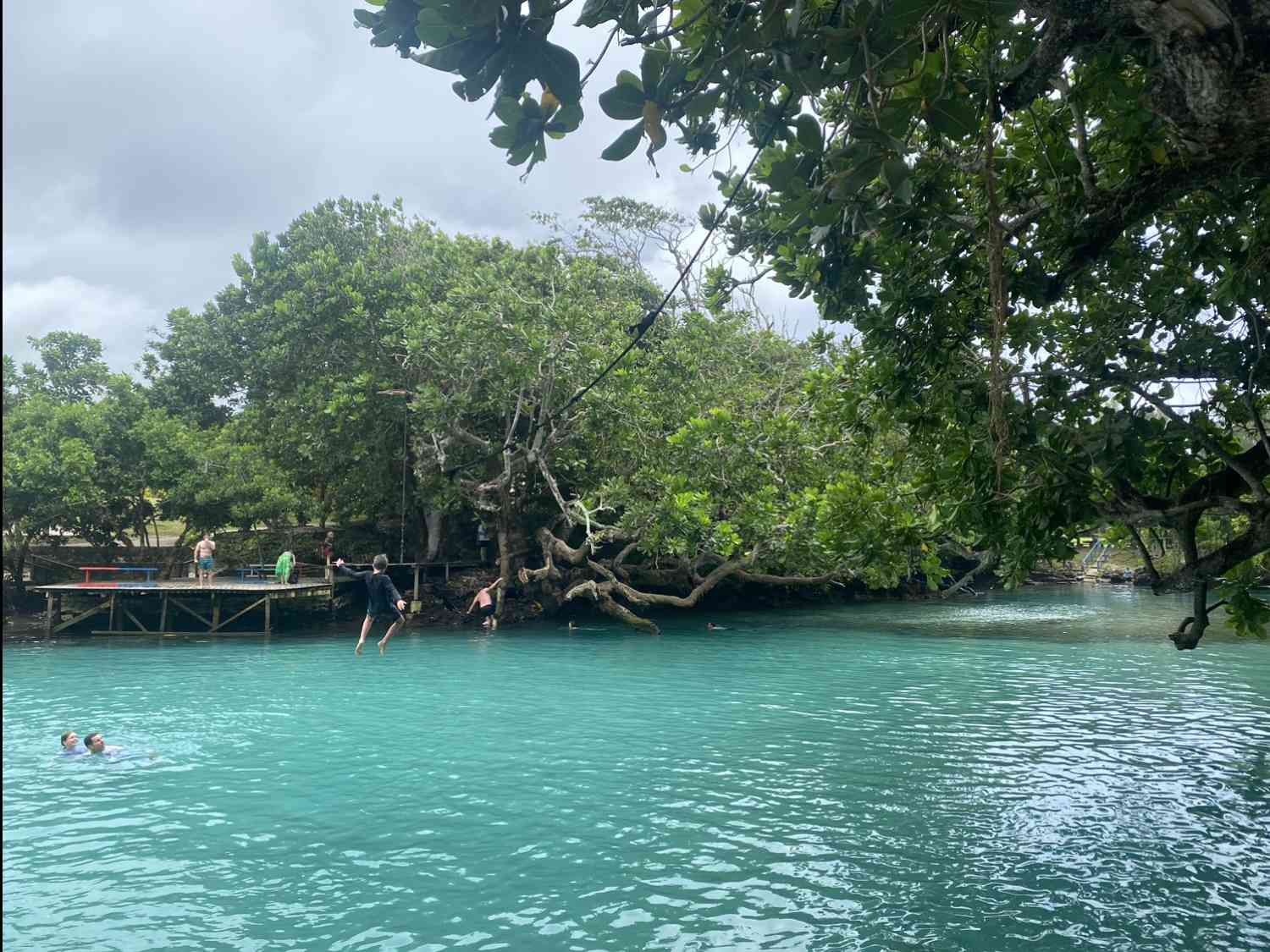 A kid swinging into the Blue Lagoon. Nice temperature. 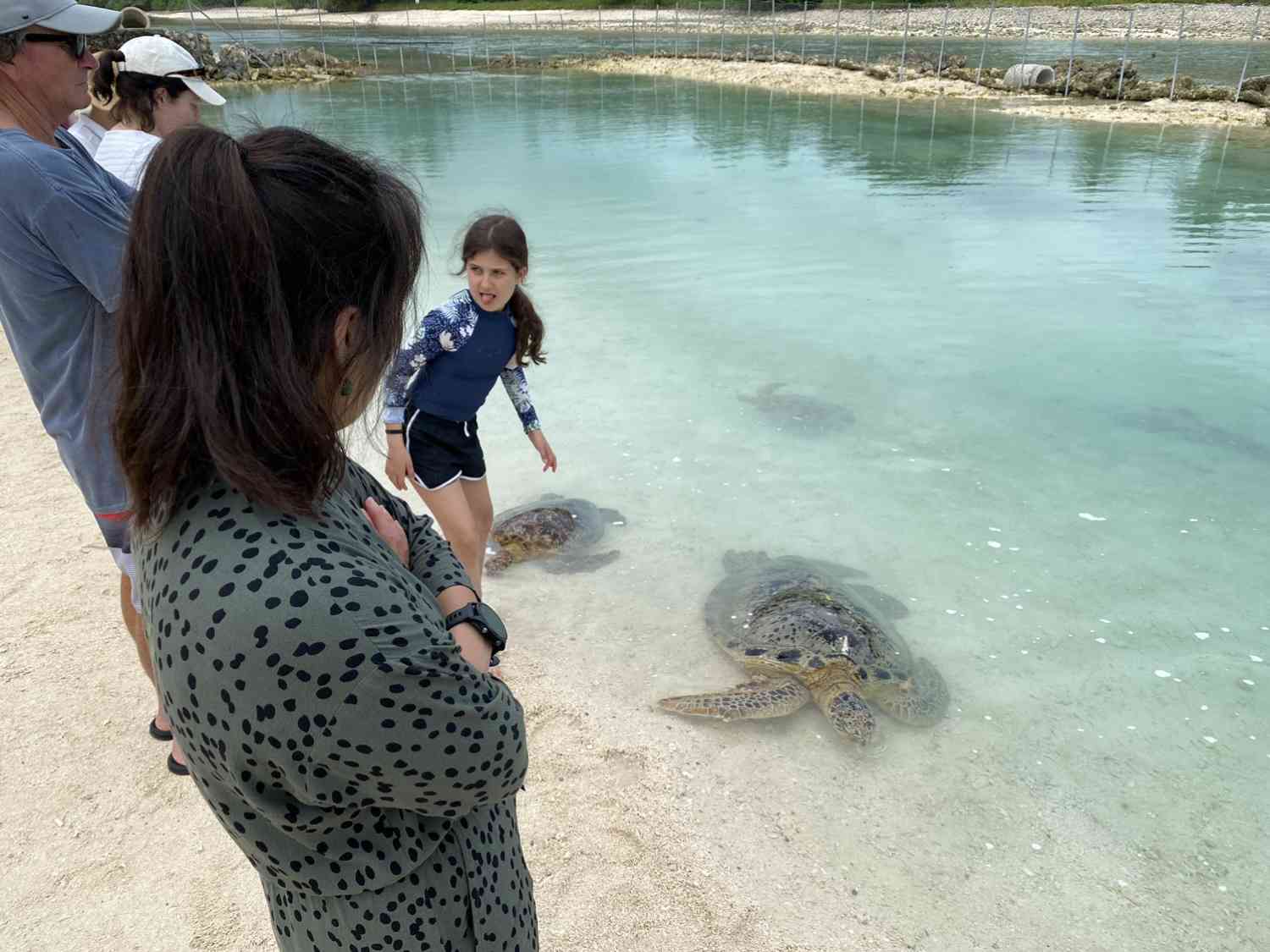 Ultra-wifey on the day ahead of her birthday, looking at the 100-year-old Big Ben turtle. "Swimming with turtles" wasn't what we thought it would be. We were hoping they wouldn't be fenced in. I guess this arrangement ensures a 100% success rate. 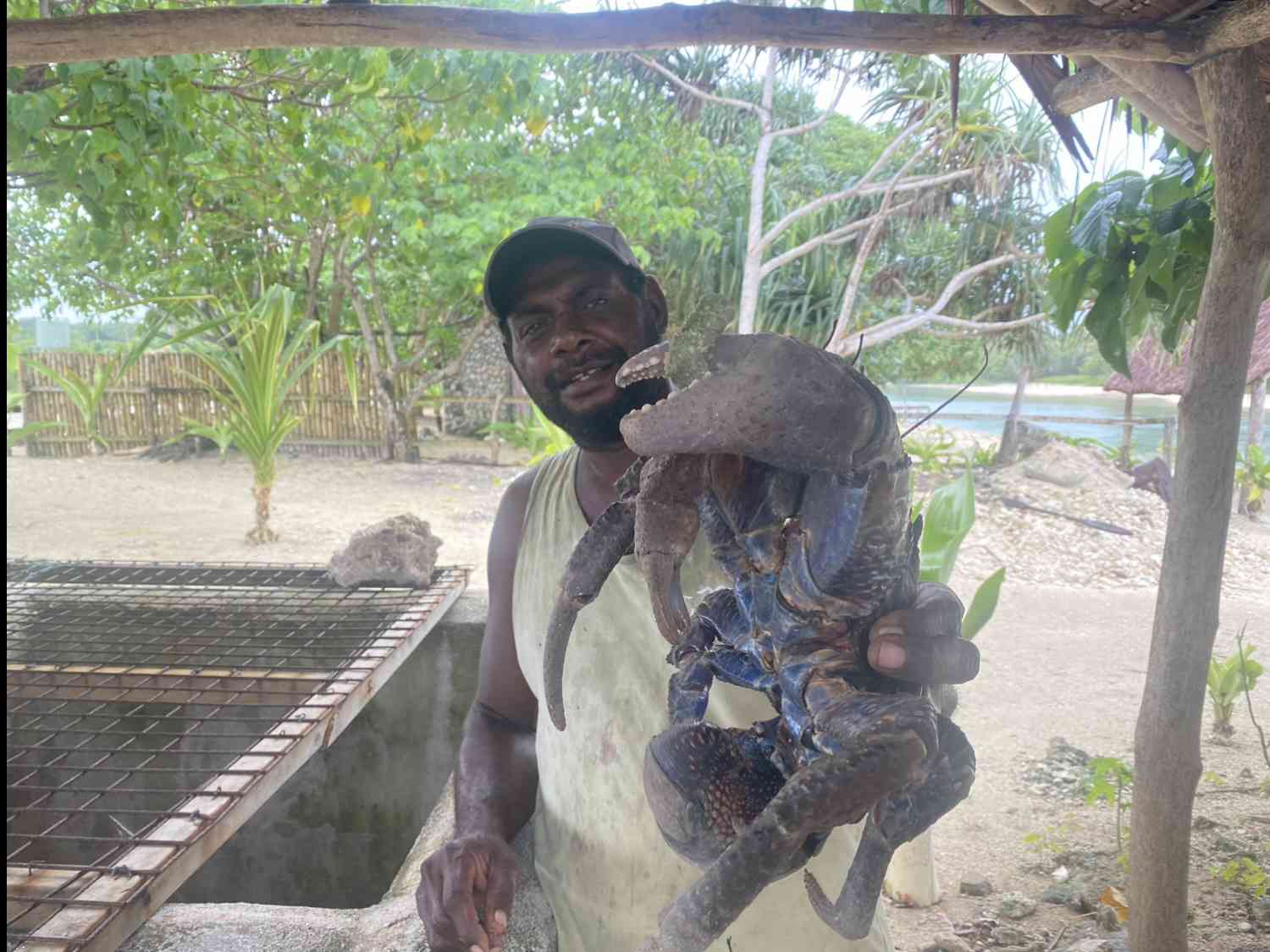 Vanuatu coconut crabs are the largest and most powerful land crabs in the world. 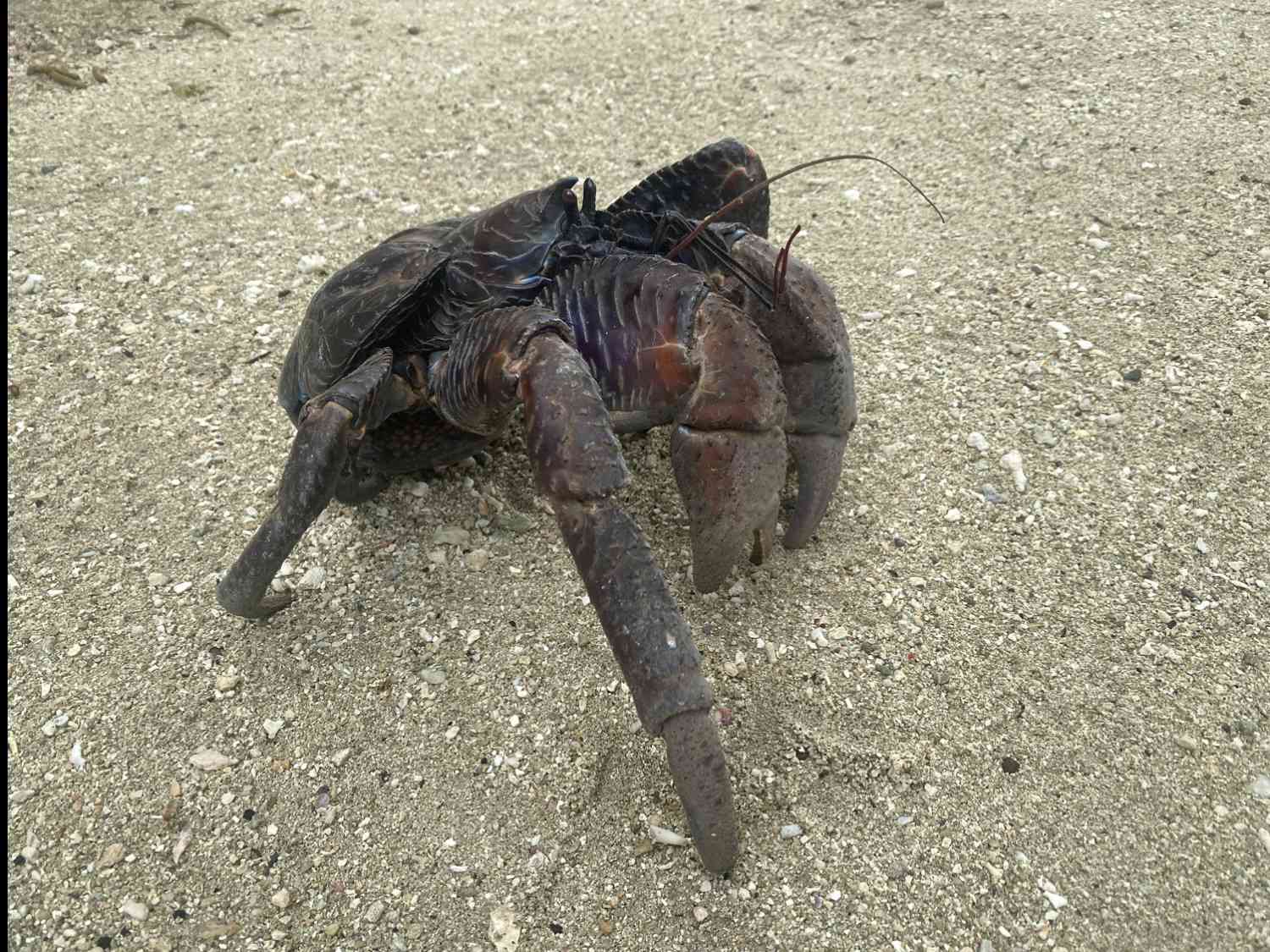 A coconut crab is capable of removing the husk of a coconut with its large claws. It could also clip your finger off. Fortunately they move slowly. And they are endagered as people like to eat them. 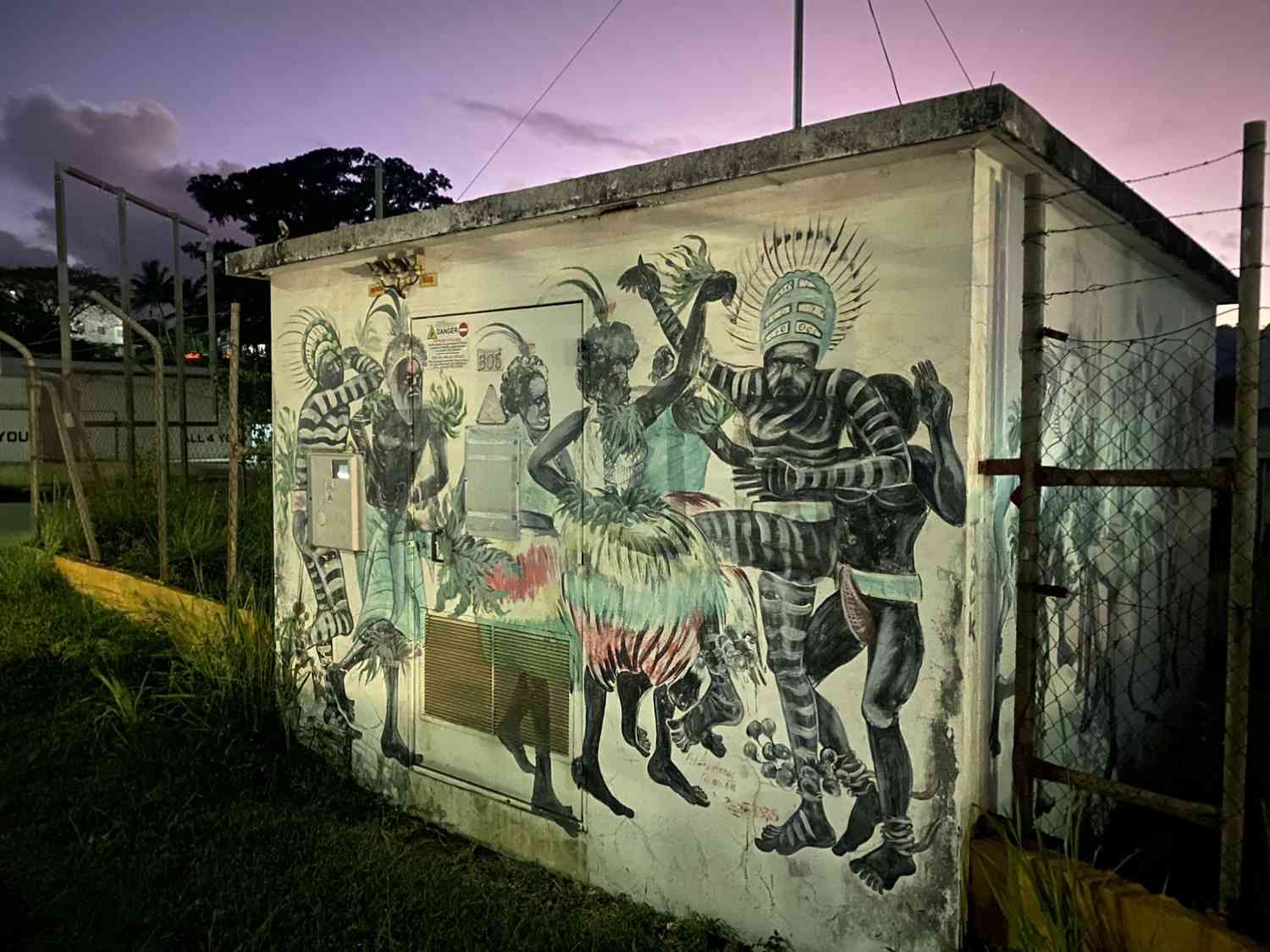 Vanuatu has an abundance of languages, dialects, and culture to boast from. Much of it unspoiled as Vanuatu is among the worlds least visited countries.