I didn't know what to expect from coming across the border to Panama. I had crossed the same border 2,5 years earlier. But this was different. 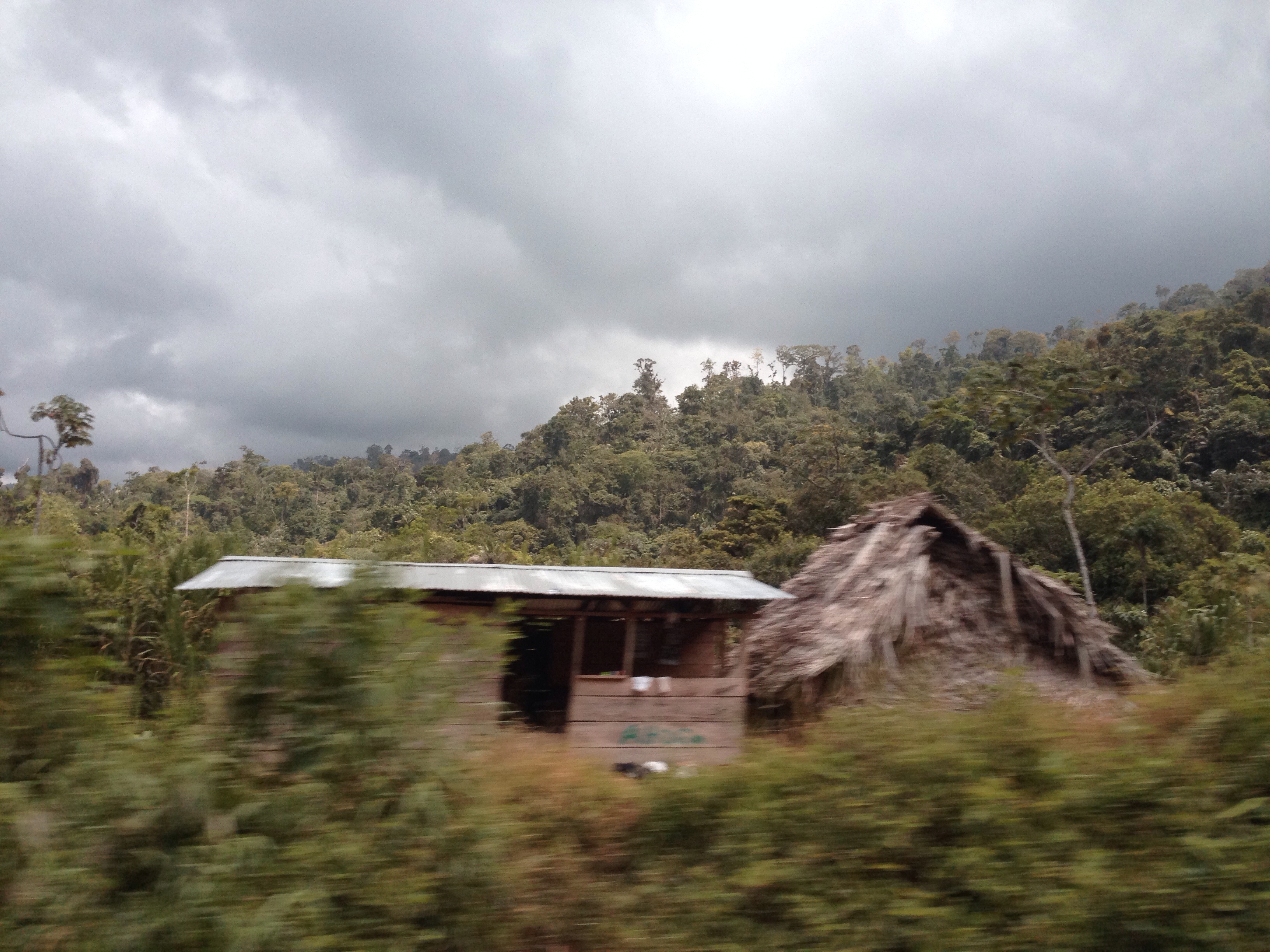 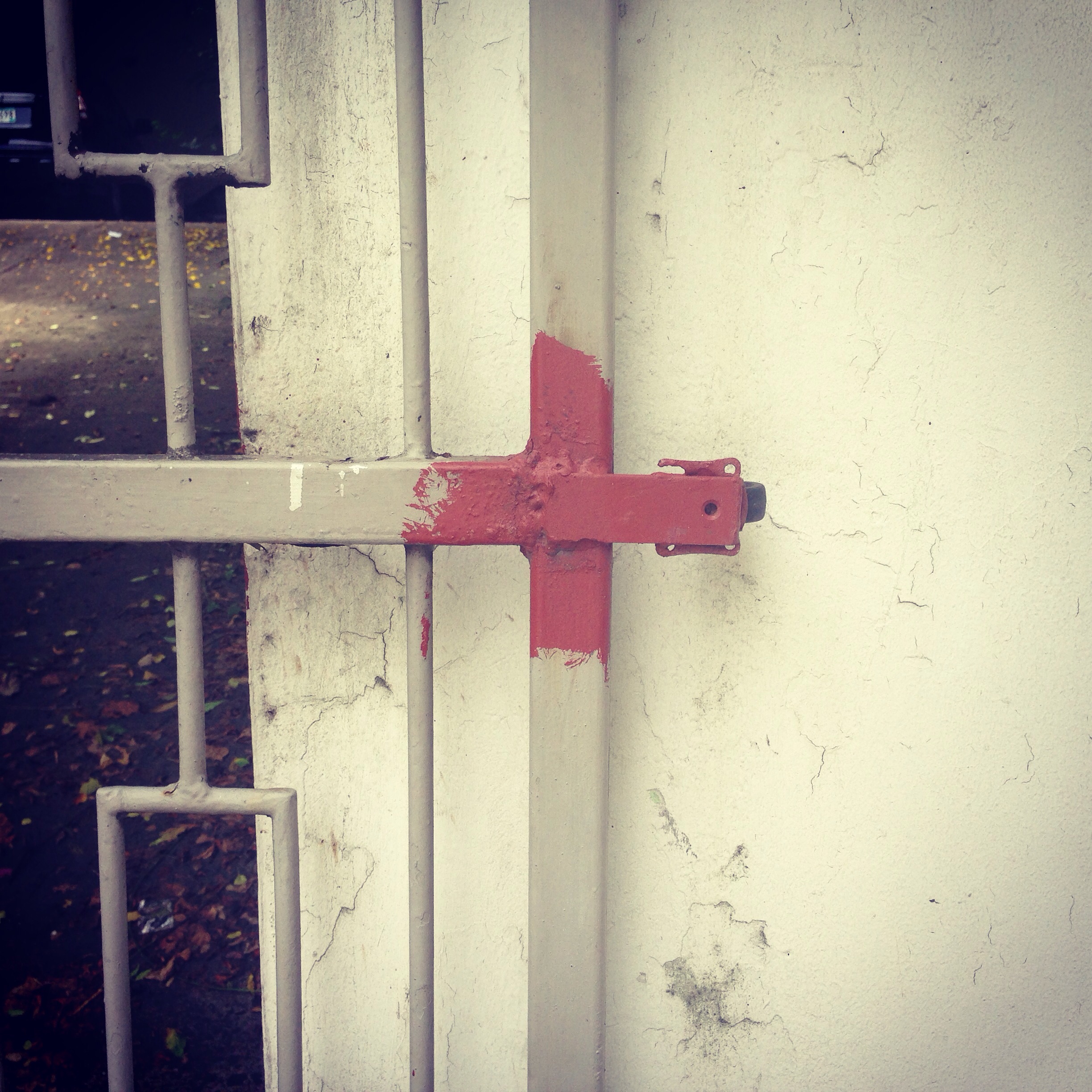 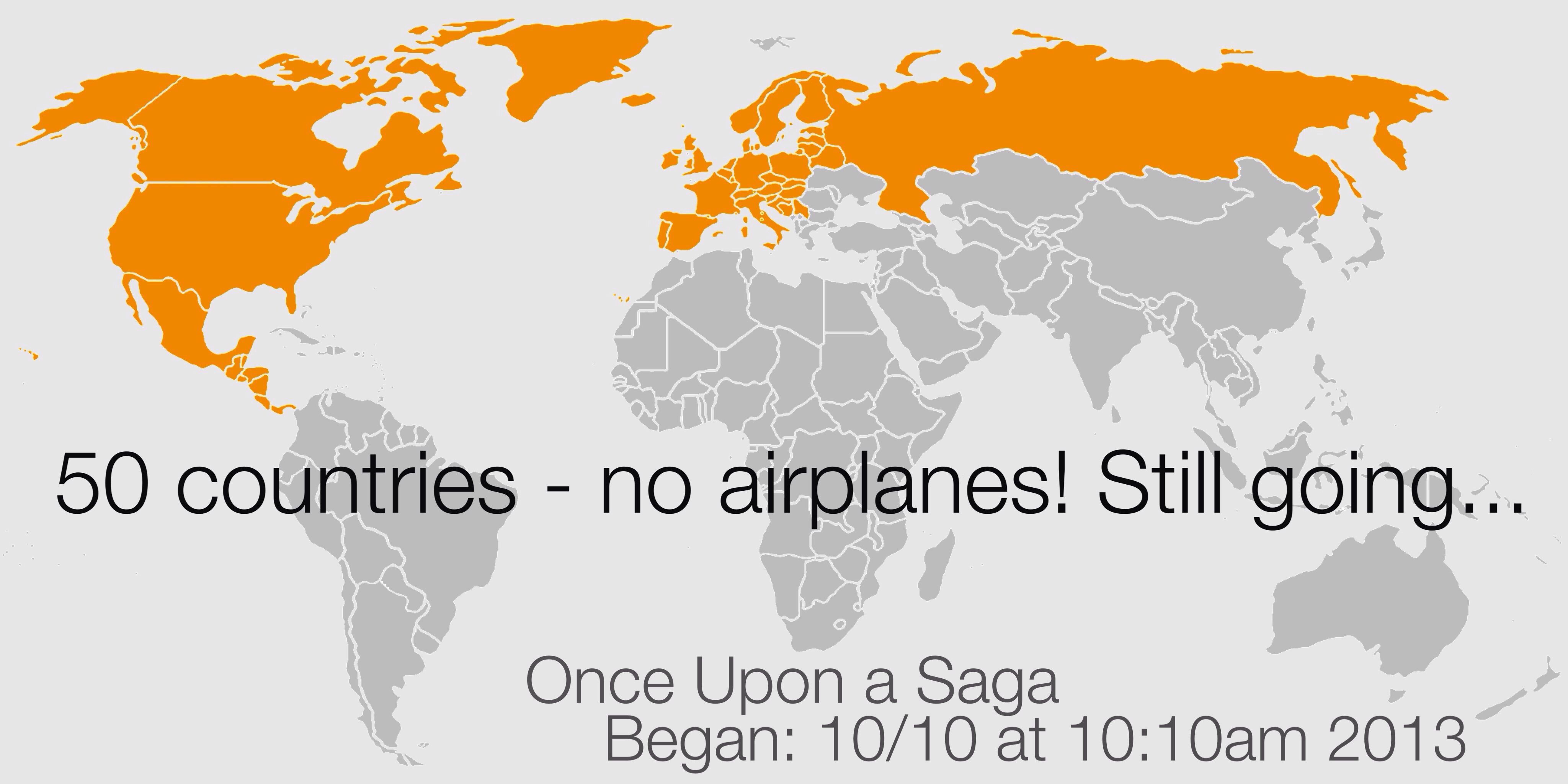 The last time I crossed that border was on a motorcycle and Panama was my end destination. This time I walked from Costa Rica to Panama and got on a bus. In some ways I was hoping that it would feel more special. But in the end...it was only country #50. A very big number...but I still have 153 countries to go and I basically just look like a tourist to those around me.From the border I made it down to Santiago and decided to spend two nights at a hostel I had been told about by Max. Max is a German guy who I met on the bus. He stayed at the hostel 3 months earlier when he first arrived. Soon after he left to go and explore Costa Rica on a life changing experience. He worked 1 month on a farm and it made me think about airport security for a second: "have you been in close contact with any farm animals?". Good thing I'm not flying. 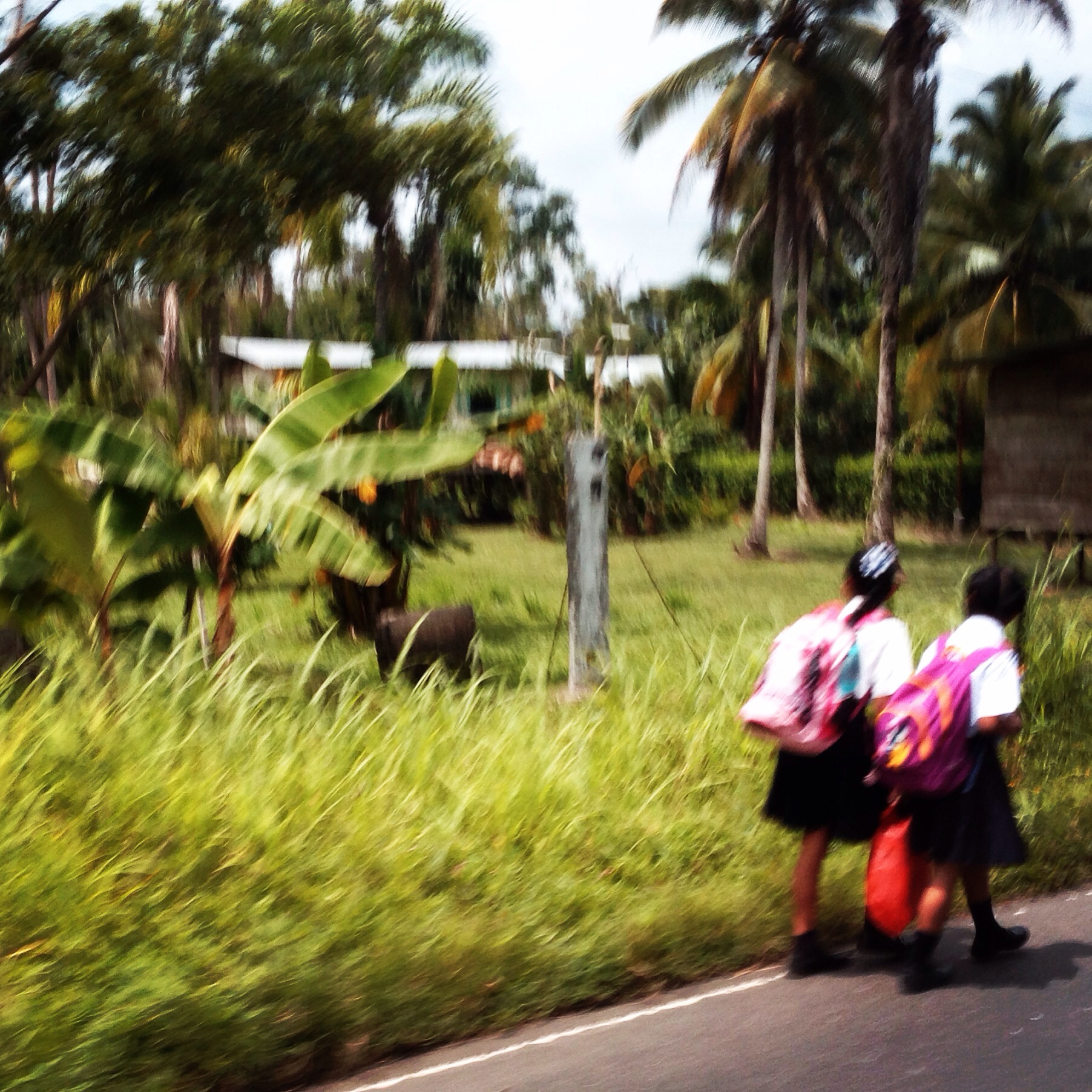 School girls as seen from the busThe hostel was quite original in many ways. Lidia is the owner and I was able to negotiate a $1 discount/night saving me the enormous amount of $2. The place is called Hostal Varaguas and lies between ordinary houses where you would not expect to find it. It has a beautiful garden and very simple but interestingly original quarters for the visitors. Almost as something you would expect to find abandoned in a jungle or swamp. But very well kept. Anyway, I was basically alone and had it all to myself. The following day I logged on to Reddit in the morning and posted: "Hi, I’m travelling to EVERY single country in the world in a SINGLE JOURNEY, without airplanes. Ask me anything!"The last time I did a Reddit submission was back in Greenland a few months ago. And there wasn't any overwhelming attention. This time it was different!! I was pinned to the chair for 9 hours straight while answering hundreds of questions. The reaction from people was overwhelming and I got dizzy several times as the baking heat created a sweat lodge out of the dorm room and I drank more water than I ever had before in order to compensate. The sheer interaction with people from all over the world was almost addictive and having skipped lunch and postponed dinner I was completely fried afterwards. But it really proved to be an amazing way to reach a large audience which is vital to me. Because what is the point about all this social media I'm administrating if there is no audience? With no large audience then only few will learn how you can travel at low cost and reach thousands of people from various backgrounds. I really want people to see that the world in no way is as violent and unfriendly as often portrayed. I don't want people fearing Mexico, Iran and other lovely places around the world. I want everyone to see that you can and will find friendly, helpful, curious and open minded people pretty much wherever you go. 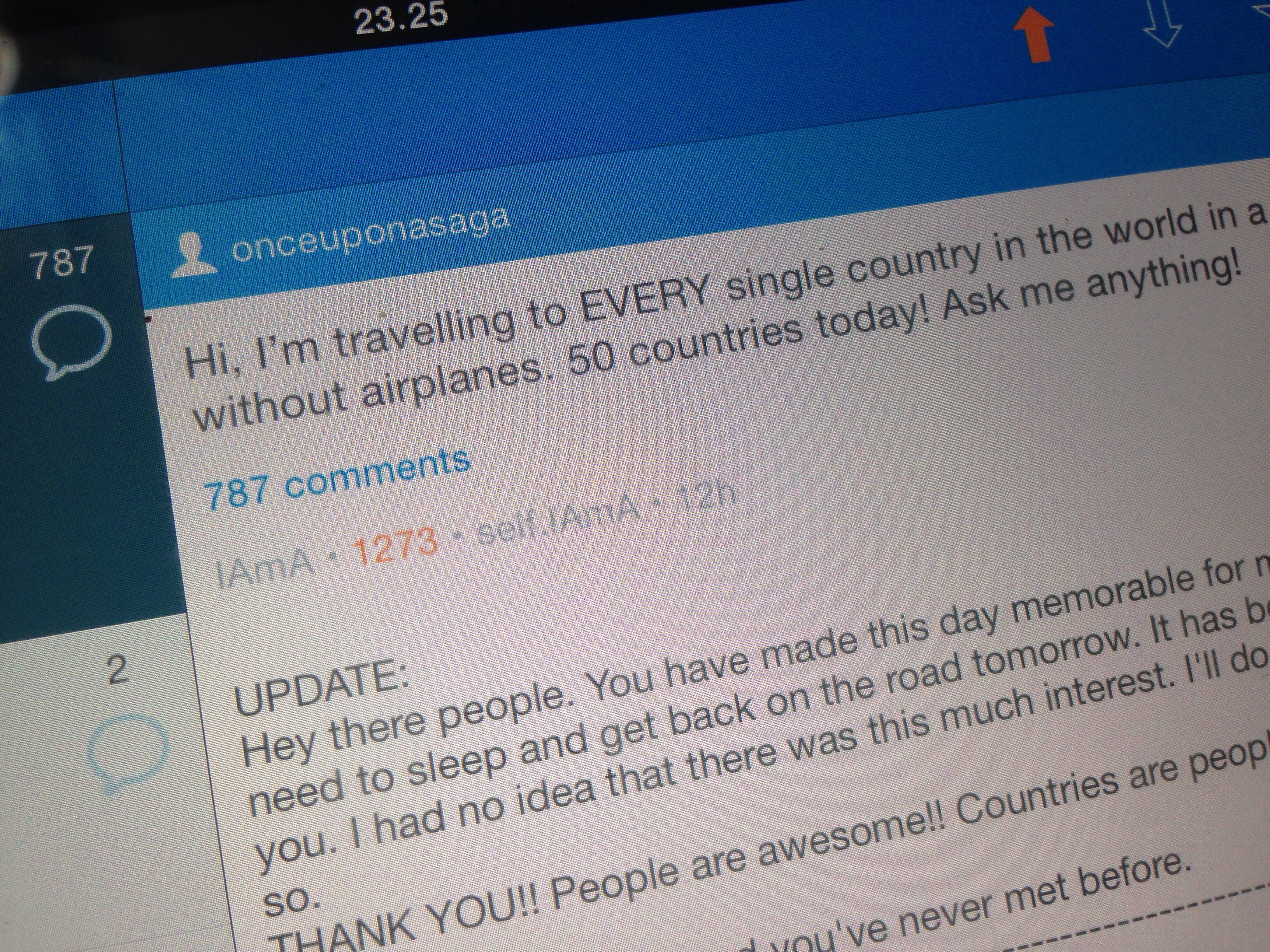 Status after 9 hours of Reddit (I have added another 5 hours after that)The next day Lidia asked me to help her with some garden work and I stayed around an additional 2 hours in the heat putting up wire so that the garden can grow a roof. And then I was off to Jinja Island near Boca del Toro by bus.But I arrived too late and didn't make the last taxi boat to Boca del Toro. Instead I made it to the small port of Almirante as the darkness started to surround me. At the terminal I met a surfer from Florida. If you would ask me about Americans then I would normally describe them as friendly. And if you would ask me about surfers then I would normally say that they are generally laid back, easygoing and good company. This guy was the opposite. I thought he was friendly to begin with but after about a minute it was clear that he was both aggressive, pessimistic and rude. It was actually possible to ask some of the remaining boatsmen to ferry us across the short 20 minute trip to Boca. But they were charging $80 for what costs $6 in daylight. I'm not going to say it was because of the surfer's attitude...oh what the heck! Sure, it was most definitely because of him because I'm almost sure that with a friendlier approach something would have been possible.We ended up leaving the port, in the rain, after about 20 minutes. The surfer told me that there was only 1 hotel which was run by "the Chinese" and cost $25/night. And the surfer was set on taking a taxi. I told him I would rather walk and he gave me a "do what you want" attitude. 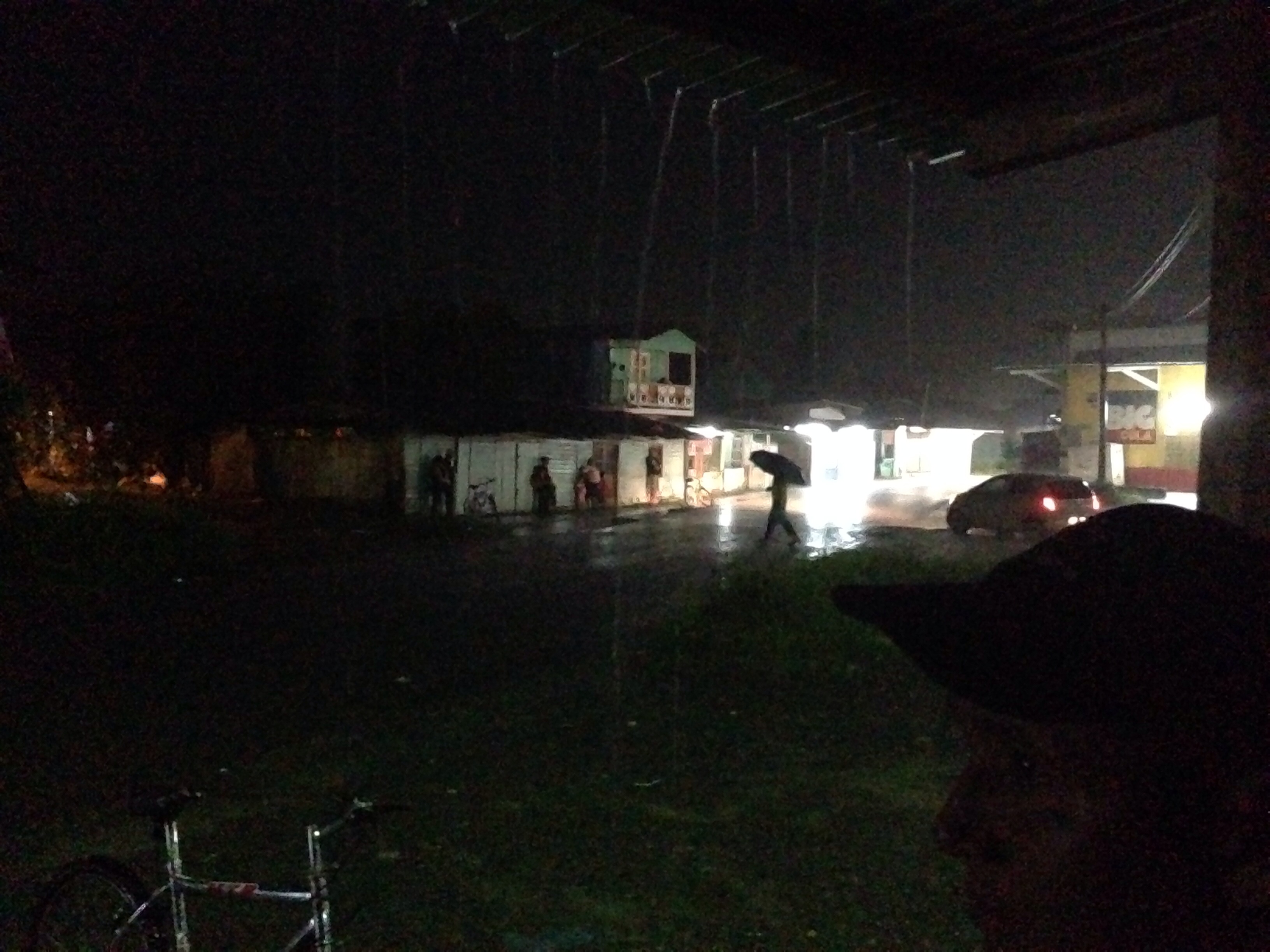 Waiting in the rain in Almirante Immediately after parting I walked over to a security guard to ask if there were any other options for the night. A man standing next to the security guard took over on the conversation and told me to follow him as he knew a place. He started walking into the rain expecting me to follow. I asked how much it would cost and he quickly said around $10-15 and ushered me out into the rain. I had a feeling that this could be very wrong but this could perhaps lead me to something else? Or not? I tried to ask a few friendly questions but he was reluctant in answering anything. However he did tell me that his name was Sugar Ray. We passed the surfer who said: "you are going the wrong way budy. There is only 1 hotel here".Sugar Ray and I walked a little further. I asked Sugar Ray if the Red Cross was present in this town and he answered yes, but that they were far away. Almost in that exact moment I spotted 2 men on the road coming towards us in the opposite direction. One pulling a bicycle and the other wearing a white T-shirt with a large Red Cross emblem on it. I immediately approached them and explained who I am and what I am doing. We talked for a little bit and then the one with the bicycle told me that I could sleep at his house. After this I thanked Sugar Ray many times and walked off with the man with the bicycle. His name begins with an M but I never really got it. His surname however is Valencia and he too turned out to be a volunteer with the Red Cross. 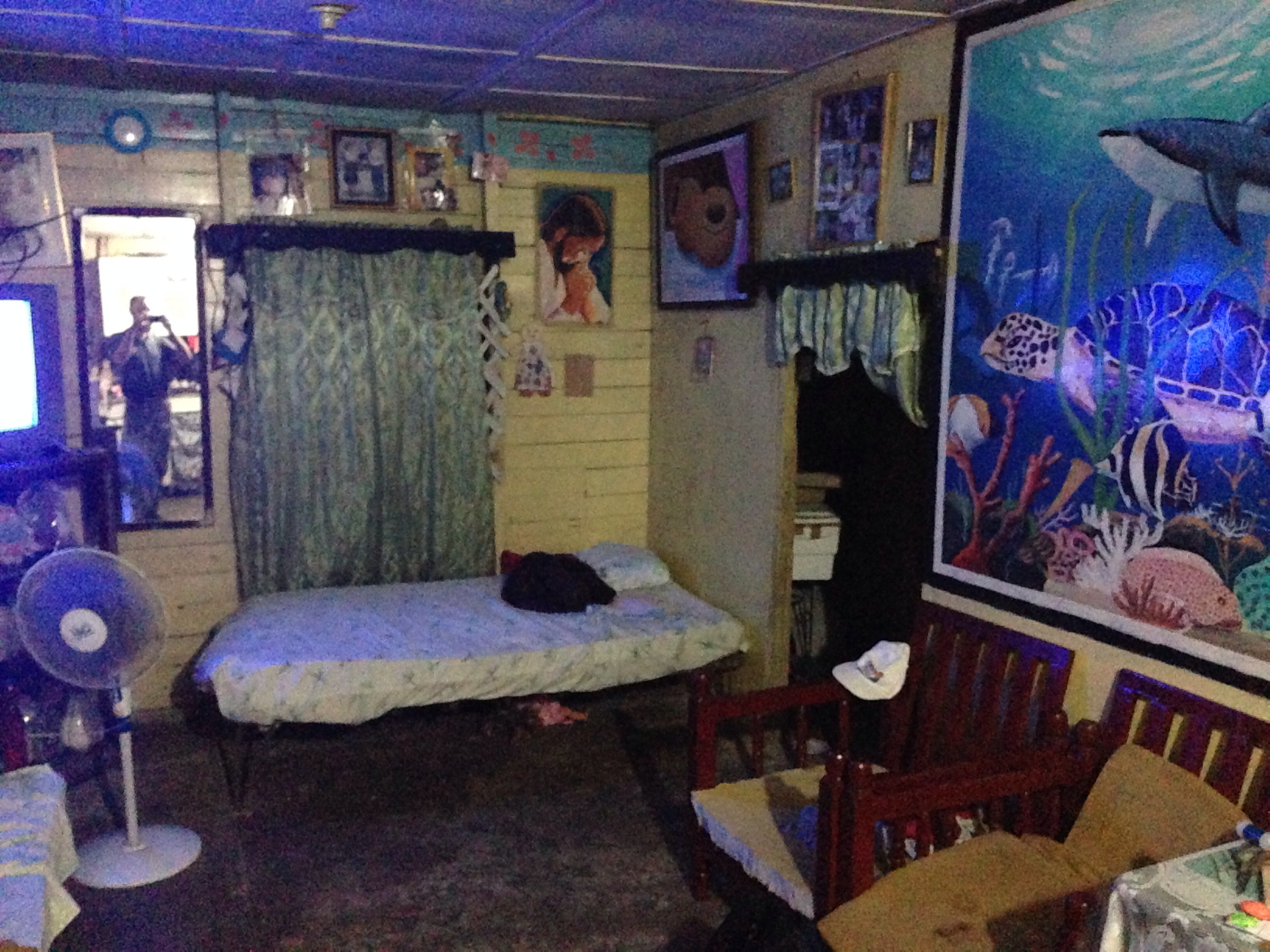 My unexpected bed for the nightValencia and I walked over to a supermarket to find me some dinner before we approached his house. On route he pointed to a house and said "family". Then he pointed to the next house and said "family". He pretty much pointed at every house on the street on both sides saying "family". My mother is often working abroad. I have two sisters and one is working in Norway and the other in France. I'm traveling...however my father is based in Denmark and has lived in the same house for many years. My family is spread all over. Not just all over Denmark but all over the world. Valencia has the opposite of me and I couldn't help wondering how that would be...We reached his house which was empty as his wife and children were in Boca working. So we had it all to ourselves. He cooked me a banana, mashed it and served it for me. Try that for local cuisine! The television was on and the movie "Transformers" was playing in Spanish until late into the evening. Valencia and I spoke as much as we could with my limited Spanish and then went to bed. The next morning he walked me to the ferry and got me a good price for the taxi boat. I wonder how the night would have turned out if I had followed Sugar Ray's plan? 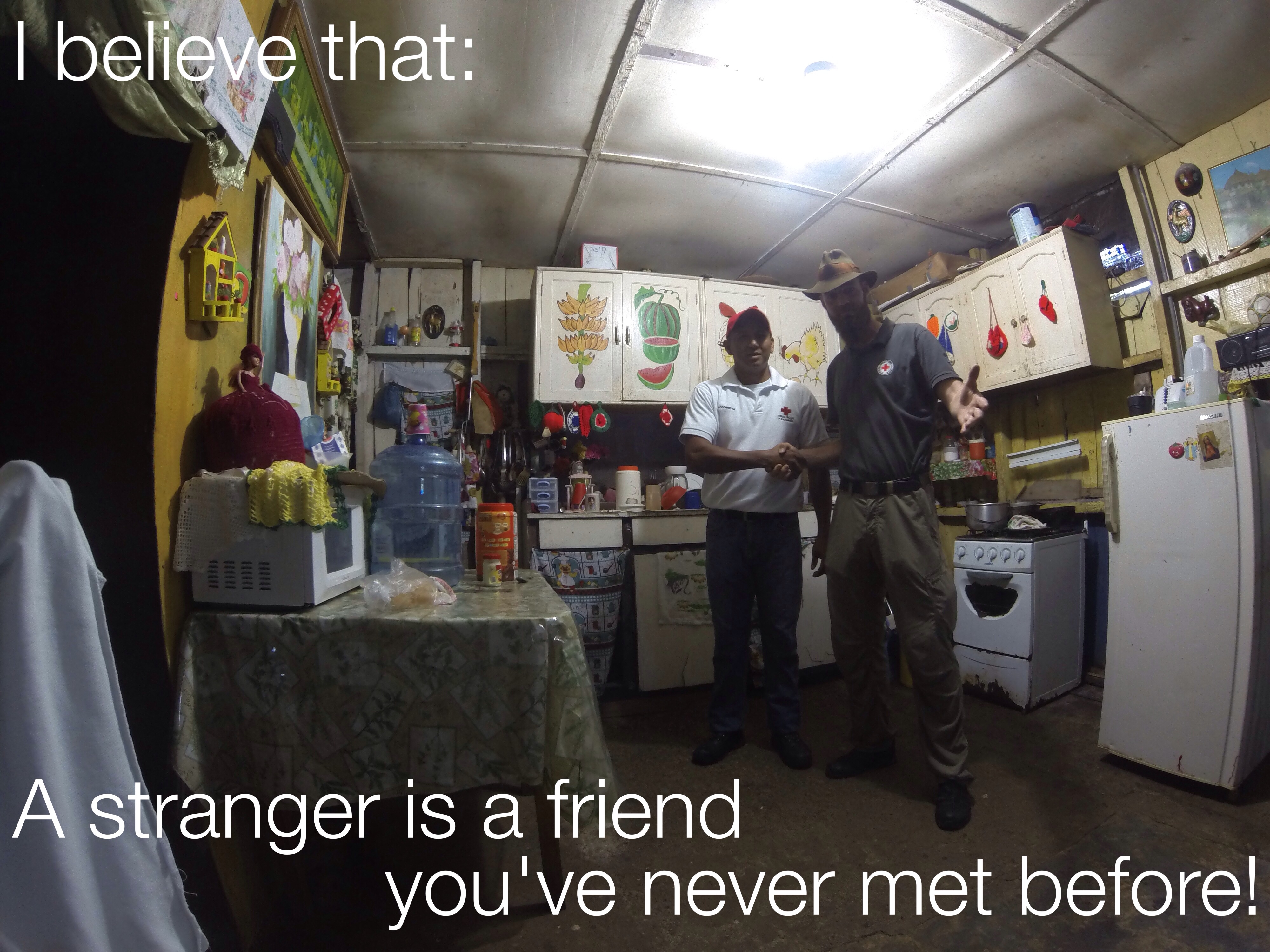 M. Valencia and I in his kitchen/livingroom/bedroom/entranceJinja Island is a temporary name for a private island near Boca del Toro in the Caribbean Sea. The current resident is Graham Hughes who is the first person to "visit" every country in the world "without" flying. As you can read from how I formulated that I do have a few issues with his claim. But I also hold great admiration for his adventurous spirit and the journey he completed which he named 'the Odyssey Expedition'. 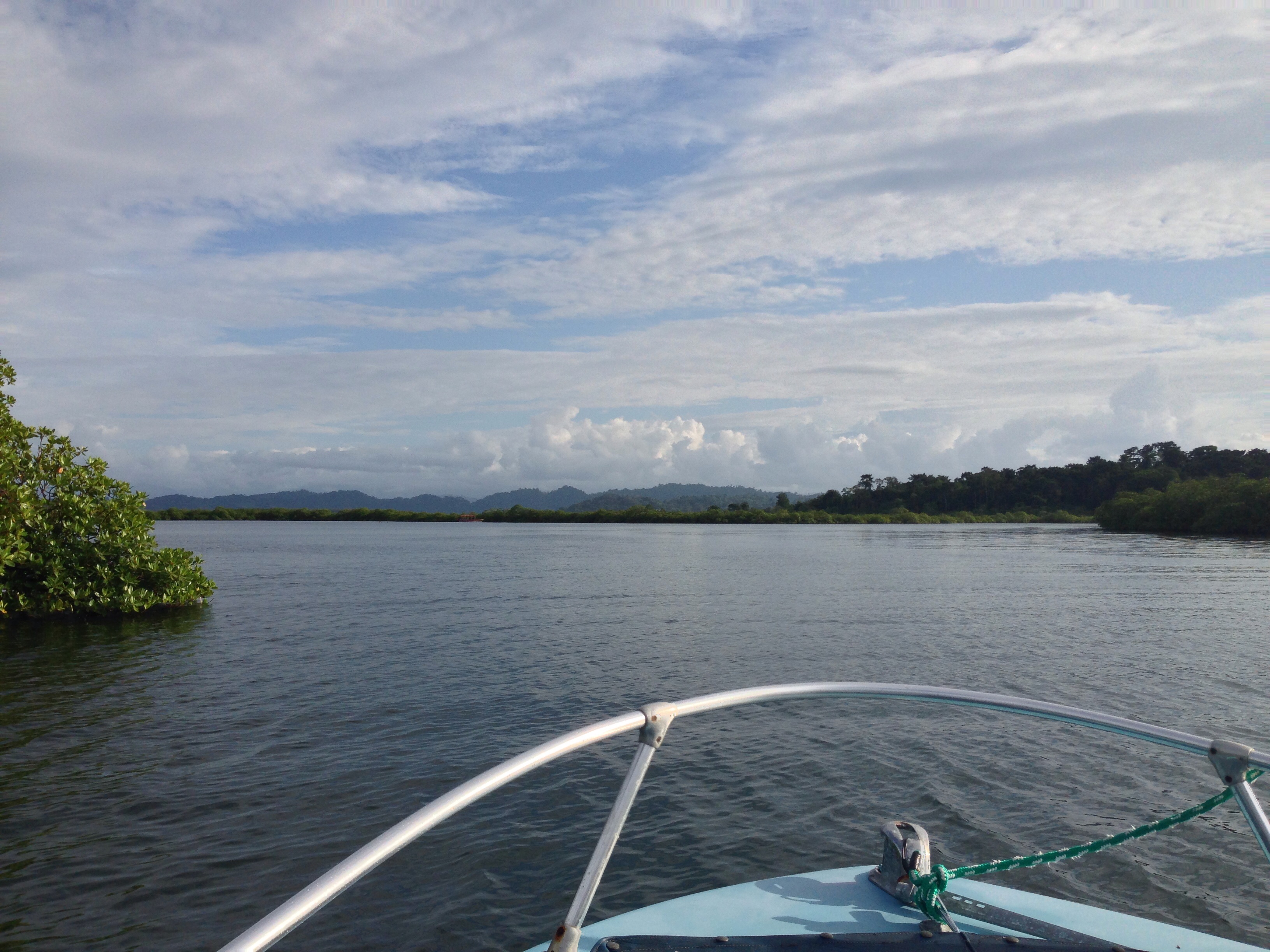 Cruising dolphin bay at Jinja IslandGraham invited me to come and visit him on his island and he spared absolutely no expense in regards to hospitality. He picked me up in his boat and gave me a fully guided tour of Jinja Island. He won this island in a competition and with it he inherited a dog named Campesino and some chicken including a rooster which he calls 'the Colonel'. We had a few beers, a great home cooked meal and a good talk about "this and that" and I told him that I admire what he has done; which is true. He is a good fellow and has a great sense of showmanship.While I do respect what he did I don't fully agree in the way it was done. He started his journey by flying to Uruguay. So he did not start from England which is his home country. But I suppose that's okay...to start a flightless journey...with flying? Anyway, he flew home to England more than 5 times while traveling. He argues that he always returned to the same destination and continued from there so it is still "going to every country without flying". I guess I'm a purist when it comes to that. Also Graham managed to visit 7 countries in 1 day while in Europe. Graham had a different set of rules and only needed to "set foot on dry land" in order to count it as a visit. To be fair; in most cases he did actually spend more than 24 hours for most countries. Though; in a few cases only a few minutes or as in the case of North Korea he only spent around 1 minute at the border! If you are strictly technical about it then I guess you could argue that he has been to every country without flying. But I like my way better. 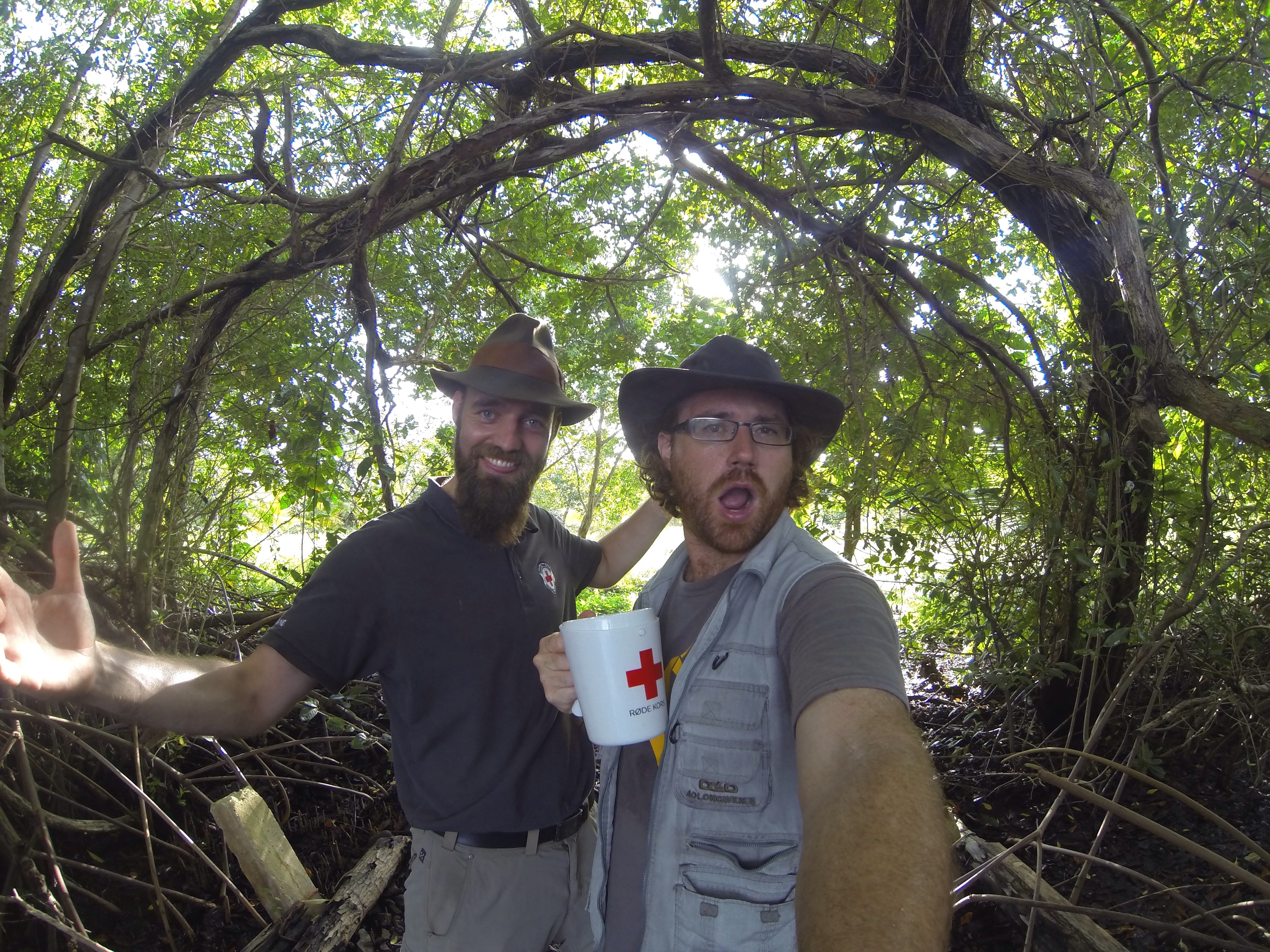 Graham Hughes and I I left Graham on Jinja Island to complete a book he was planning to write. I can almost certainly promise you that it will be an amazing book and without any doubt very entertaining. I find Graham to be both entertaining and intelligent and he pins me to the wall in aspects of talking about history. Besides, he may be the only person who can fully relate to what I'm going through.I'm in Panama City now. I have never before been to South America so when I leave Panama it will be a new adventure for me. I dream of Machu Picchu, about Aconcagua and of going there soon. The only thing between us now is the Darien Gap. 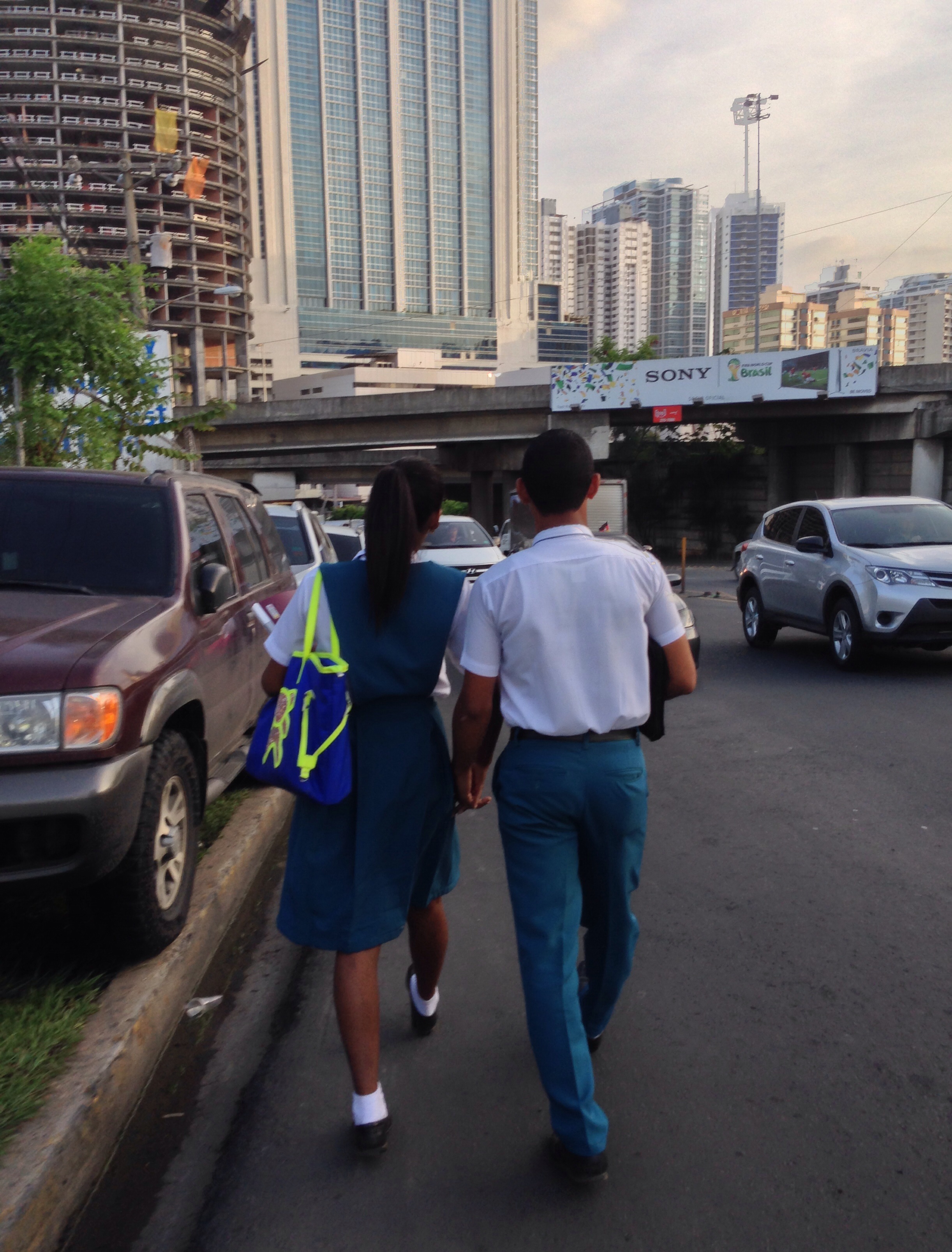