Out of Uruguay and into Braaaaazil

View Comments
If I did not believe in the kindness of strangers then I would book the next flight home.

Montevideo is the capital of Uruguay and it is such a special place. Some of you football nuts may know Montevideo from the world's first FIFA World Cup. Back in 1930 it took place at the Club Nacional de Football stadium. I was in the area and didn't know any of this. But the stadium looked interesting and as I approached a guard he referred me to the main entrance. I didn't really know if I wanted to walk ALL THE WAY to the other side of the stadium but I kind of got stubborn. You see, football is a good game which I don't mind playing or watching. But there are many other things I would rather do and I am certainly not going to watch a match on TV. If I'm watching then it's at the stadium where I can have a hotdog and a beer and sing along if I know any of the songs. 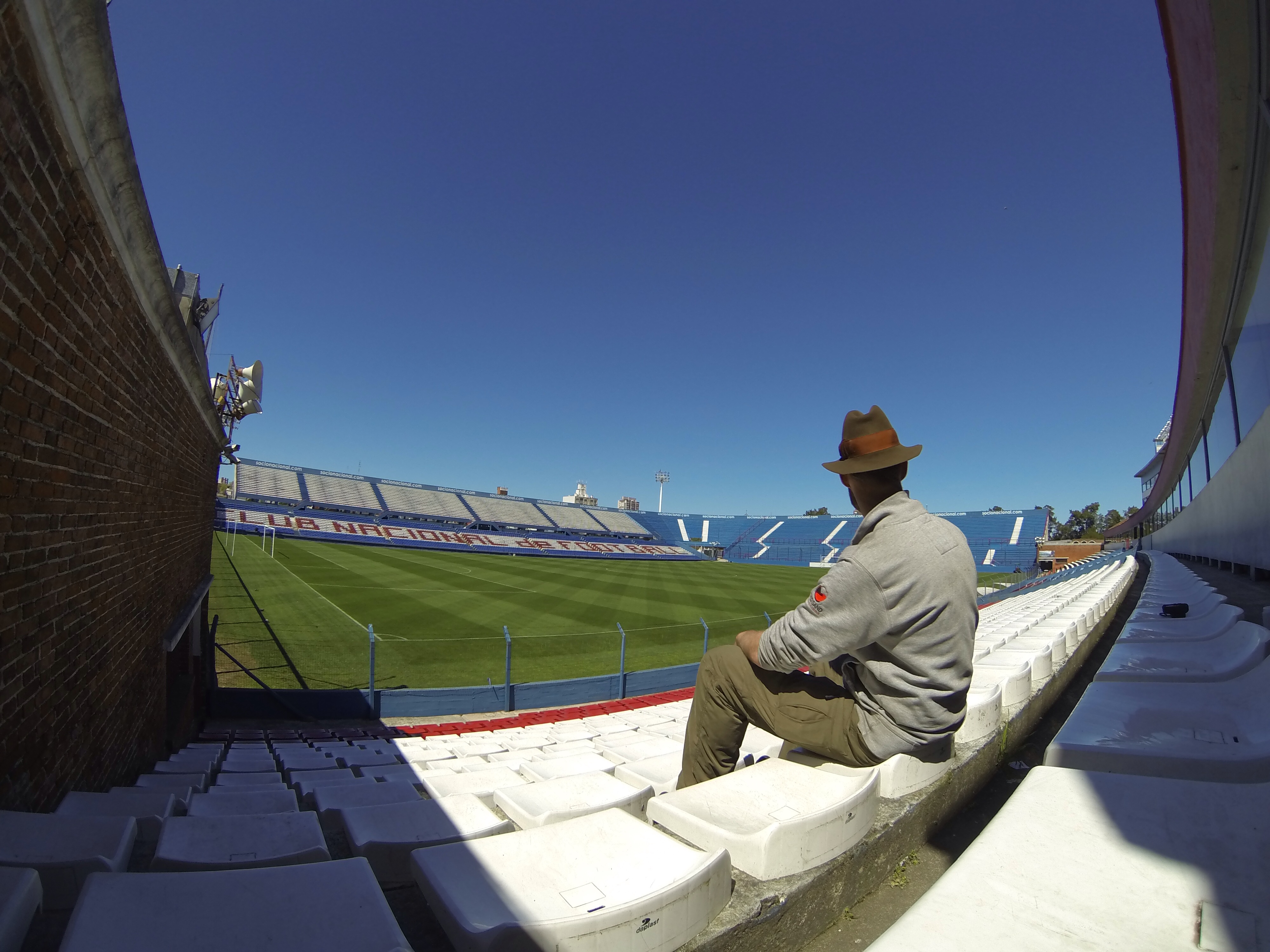 Unfortunately football is a language! My life would be easier if I spoke it I'm sure. My father happens to be fluent in football. Anyway, I made it to the main entrance and wasn't exactly stopped by security this time. Actually there was nobody else except a cleaning lady who didn't mind me taking a look. A dog was sleeping in the entrance hall and that was it. But I eventually located Ariel Paula who works there. Ariel speaks English (more or less) and he escorted me around the building after I explained that I wanted a few pictures. Ariel is a really good guy in my opinion and he is very proud to work at the stadium. He has a short military hairstyle and wore a black suit. And it was from Ariel that I learned about the stadium. As if it wasn't enough regarding the first World Cup, the stadium is also said to be where José Gervasio Artigas was made "chief of the West Bank" and is quoted for in the same time period to have said: "I may not be sold, nor do I want more reward for my efforts than to see my nation free from the Spanish rule". Well, I take it you have no idea who this Artigas fellow is. But you weren't on the tour with Ariel now...were you? :) José Artigas is a national hero of Uruguay and sometimes called "the father of Uruguayan nationhood". It's a big deal. 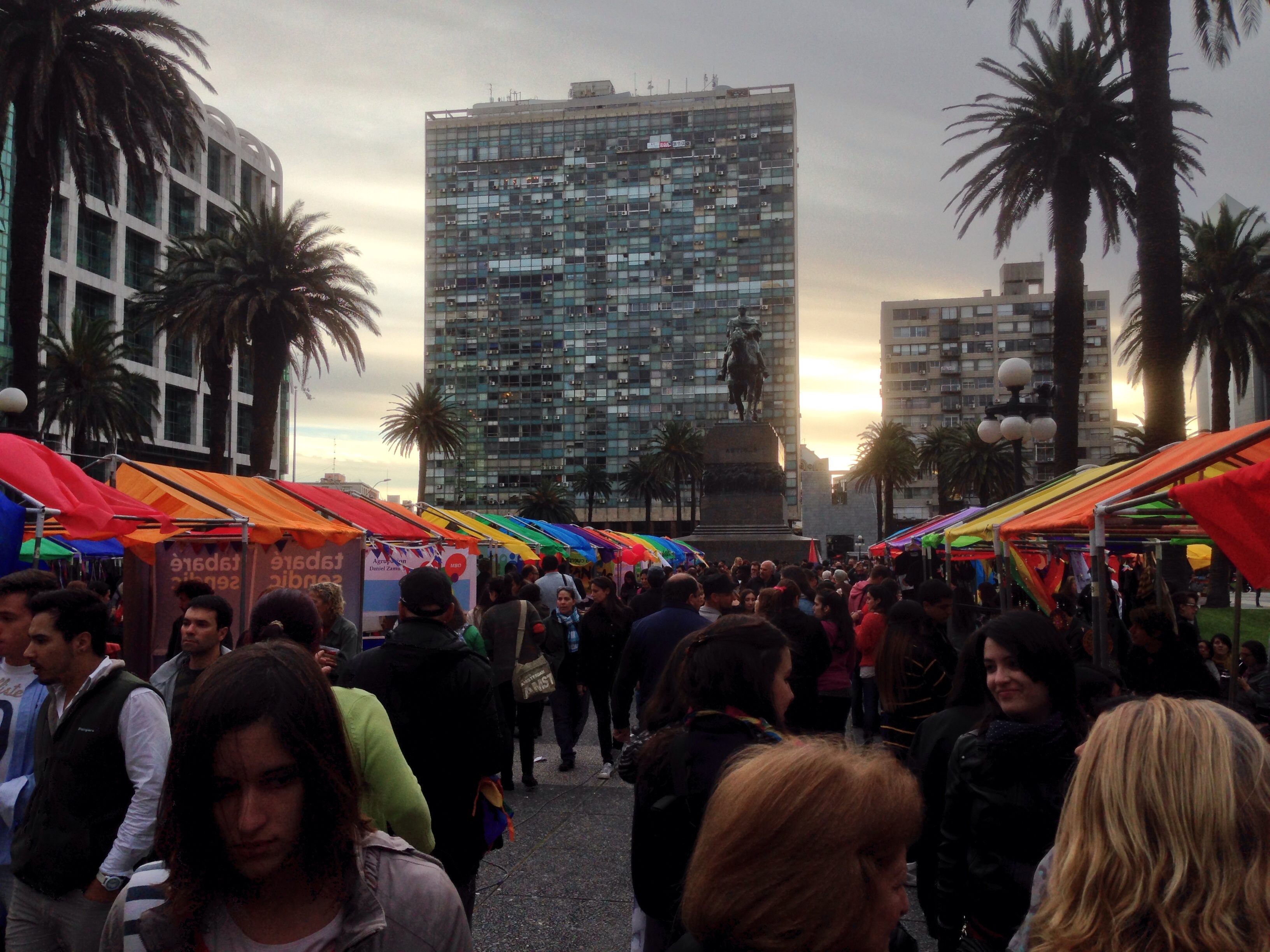 Montevideo is certainly a city where you can find anything the modern world can offer you. As it just so happens I walked into some sort of gay pride parade on my last day. But curiously you can also observe a horse carriage transporting merchandise between rush hour traffic. Or see men pushing primitive carts along the roadside. The kind of carts that are only provided with steel wheels. I like to think that Montevideo in spite of being a big city kind of place still remains a good reminder of what Uruguay is: a modern world with living roots tied to the past. I wish I had more time to delve into both the history and the culture. Because from the few days I had I surely got the sense that there is much more to Uruguay than what I have seen. 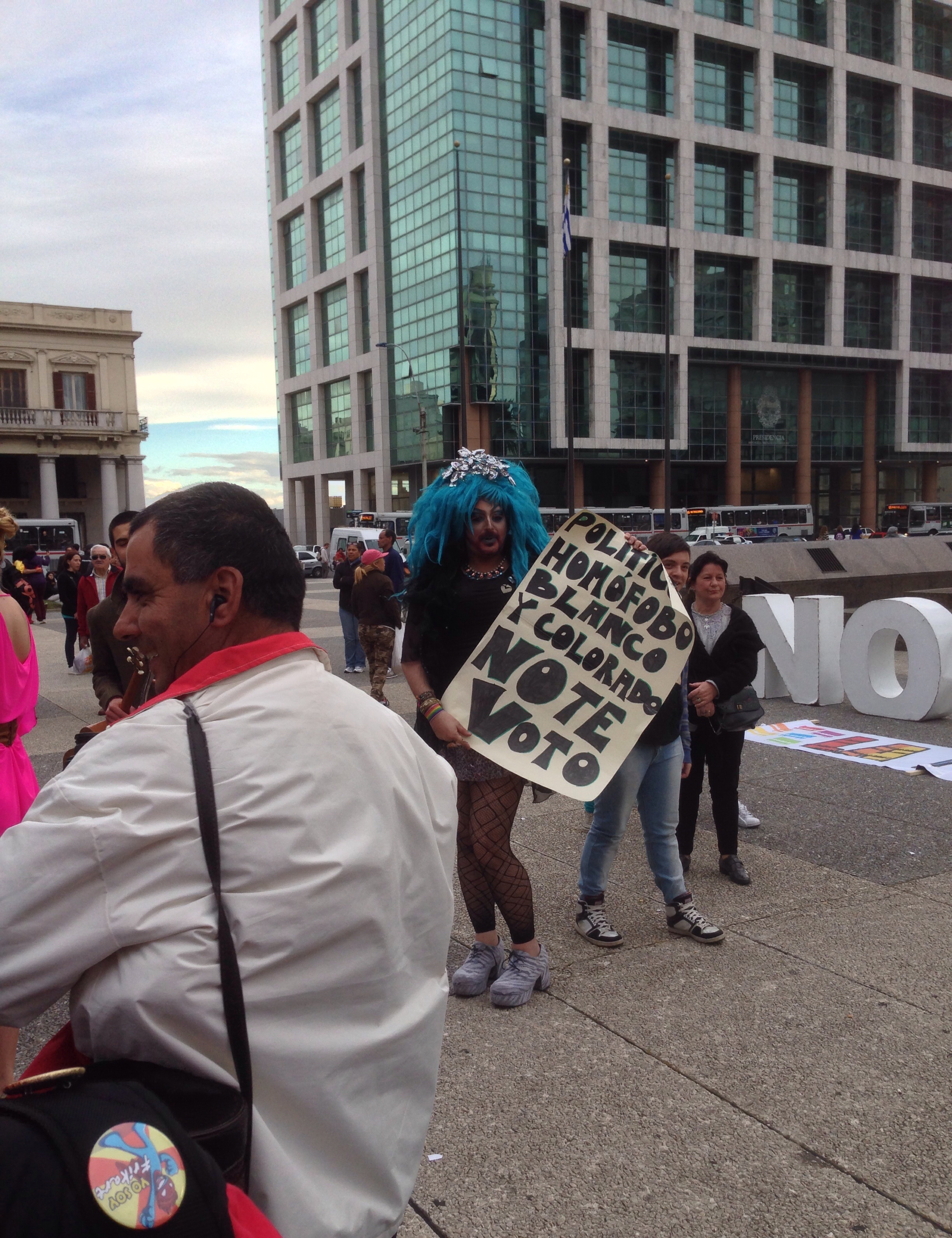 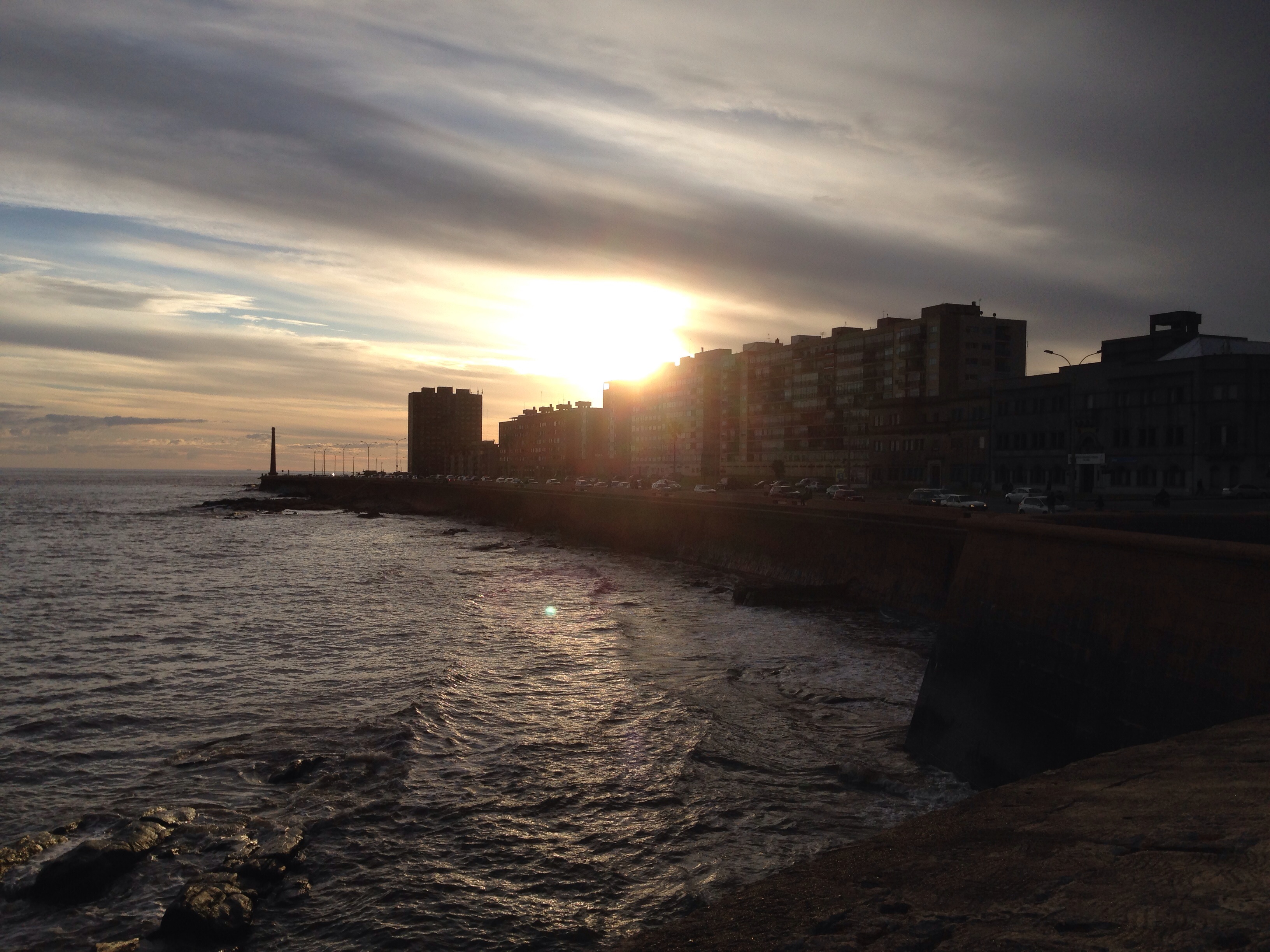 Brazil
A bus took me on an overnight trip from Montevideo and into Brazil. I arrived at Porto Alegrehe next day at 9:00am. I quickly found a bus to Florianópolis where I was meeting a friend I met in Reykjavik. Unfortunately I got left behind by the bus! The bus made a stop around midday at a service station where we were instructed that we had 30 minutes. I'm not sure if I was late or not but as I was paying for my lunch I saw the bus pull out and leave!!! Okay, forget the driver because my story is something else. My bags and my hat were still on the bus and leaving a lot faster than I could do anything about it. Normally the service station has the name and number for the drivers because they are asked to sign in. But in this case they didn't. So there I was...all alone in Brazil...at a service station in the middle of nowhere...while my belongings and MY HAT where putting more and more distance between me. 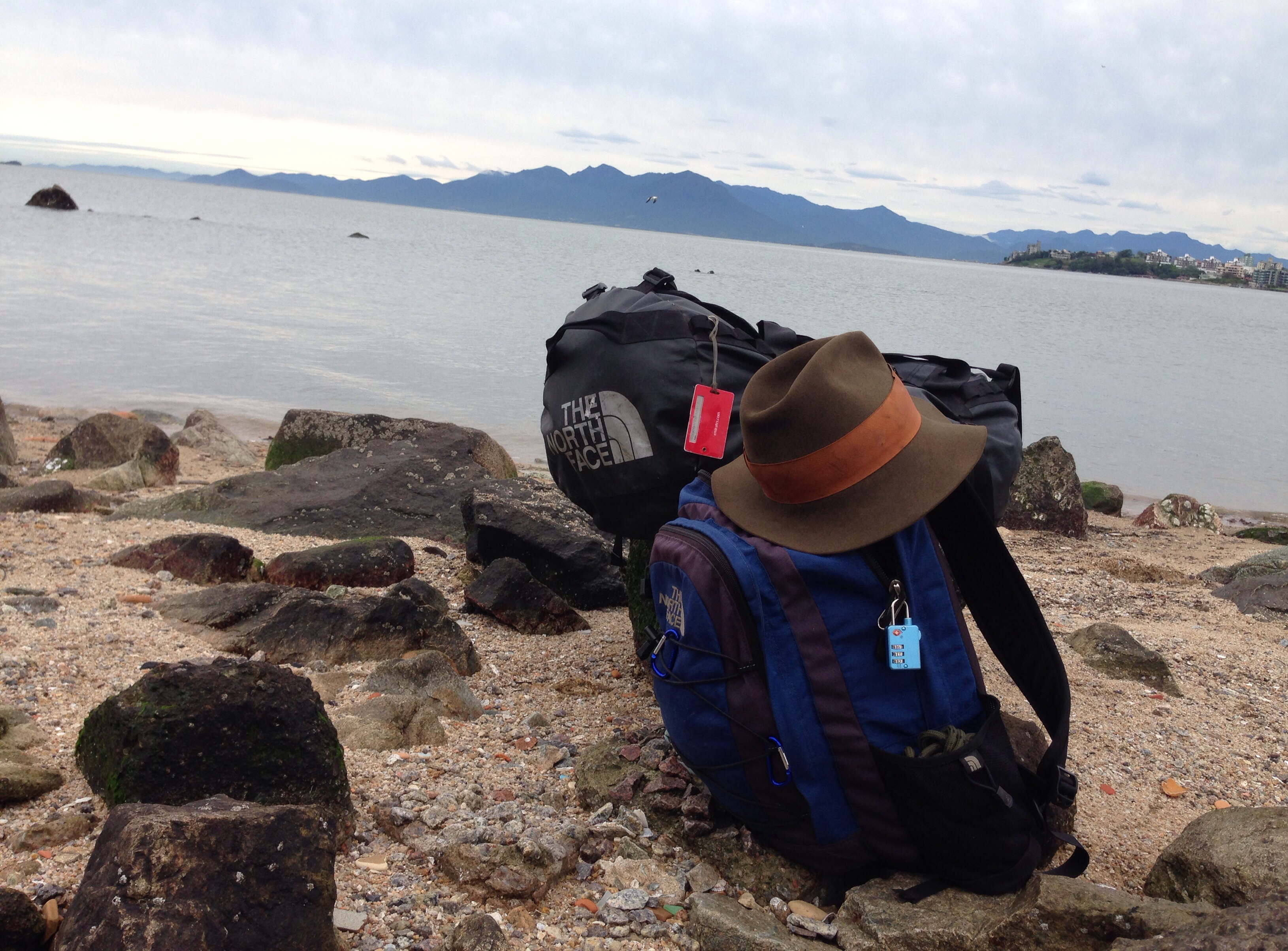 Enter: Oswaldo!! Oswaldo has got nothing to do with the bus company. And he speaks limited English and limited Spanish. But he works at the service station and chose to help. So he escorted me to his car and we raced off towards a nearby town that has a bus station with an agent of the bus company. Oswaldo explained everything, organized for both my bags (and my hat) and arranged for me to get on the next bus cost free. And he wanted nothing in return. Do you know why? Because a stranger is a friend you've never met before! :) 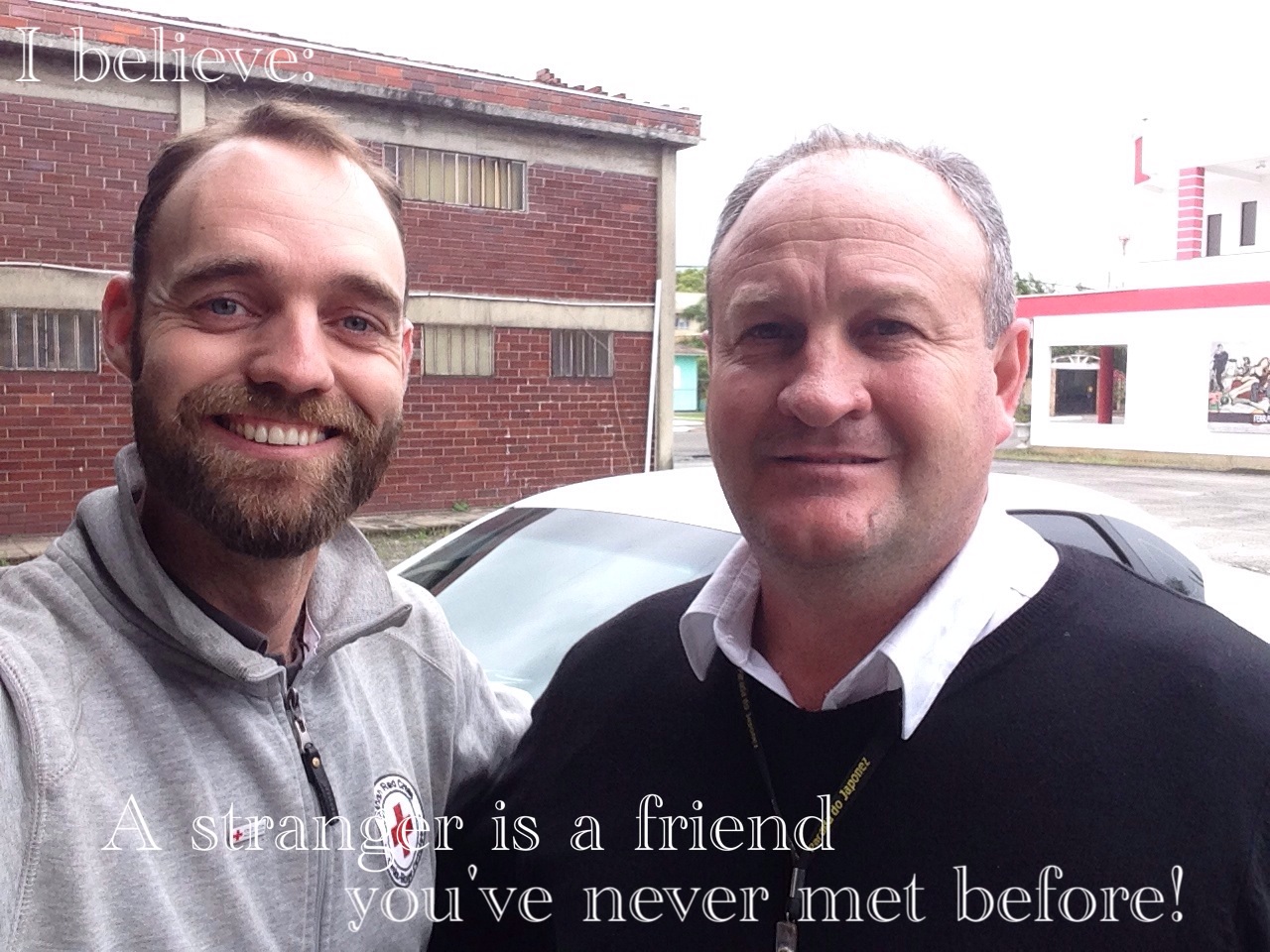 Oswaldo
I made it to Florianópolis a little later than expected. It was mostly raining while I was in the city known as "the magical island". It was nice enough in spite of the rain. At this point I was beginning to realize that there isn't a lot of people in Brazil who speak anything else than Portuguese. It's a big country with more than 200 million people so it's not like they don't have anyone else to speak to. But I'm curious to know why a huge global player like Brazil hasn't jump onboard the "we speak English too" wagon? Maybe I'll find out over the coming days... 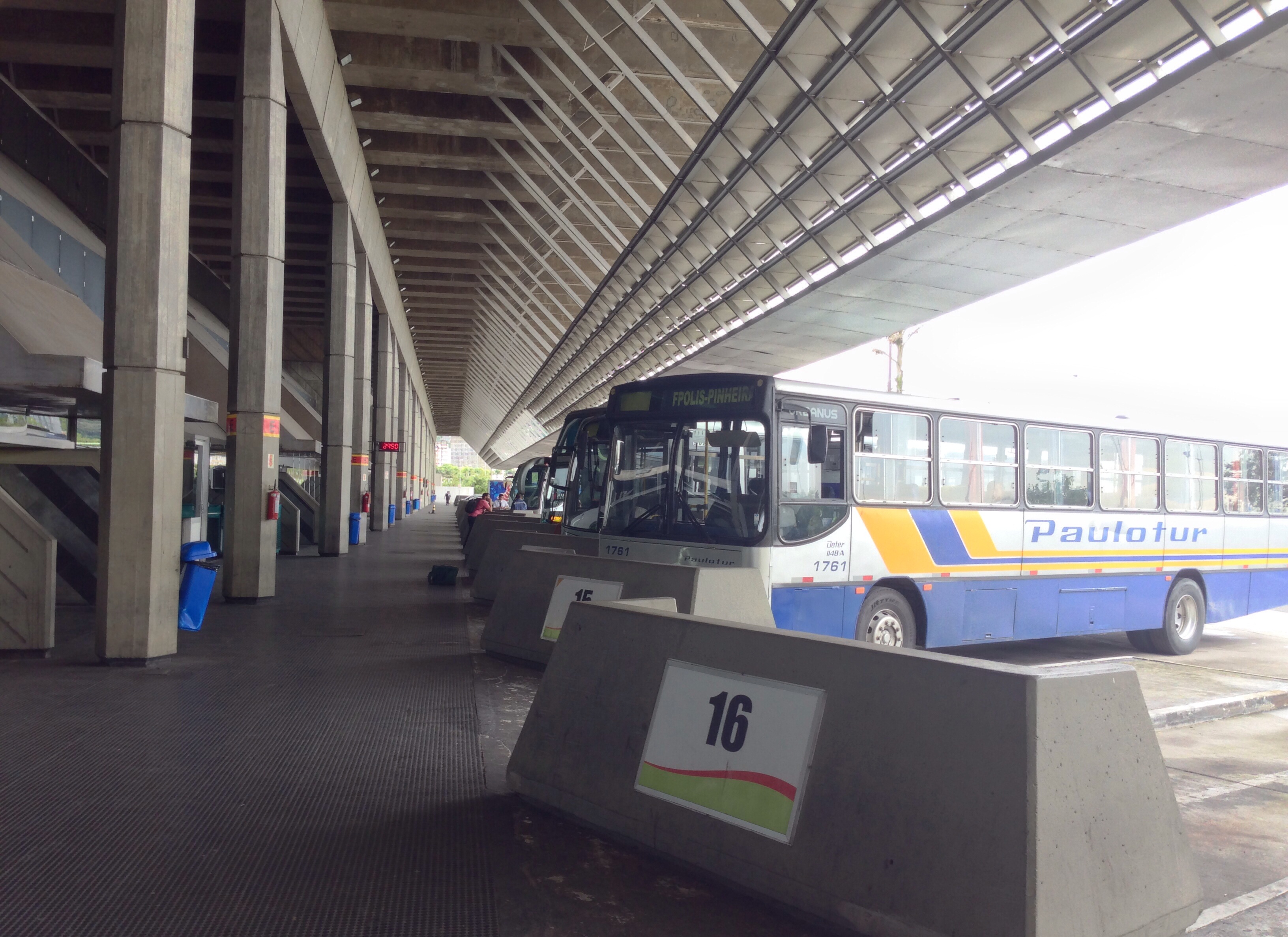 I have reached my 160th long distance bus now.
Another bus got me up to Rio de Janeiro. No rain and 30 degrees Celsius. Yes, Brazil is a huge country! Lots of diversity and many kilometers to travel. Some even refer jokingly to Brazil as a "continent". Rio is a big city with more than 6 million inhabitants. It is one of the most visited cities in the Southern Hemisphere and is known for its natural settings, carnival celebrations, samba, bossa nova and beaches such as Copacabana, Ipanema, and Leblon. Actually as I walk around I get the feeling that everyone around me is about to burst into song and dance. 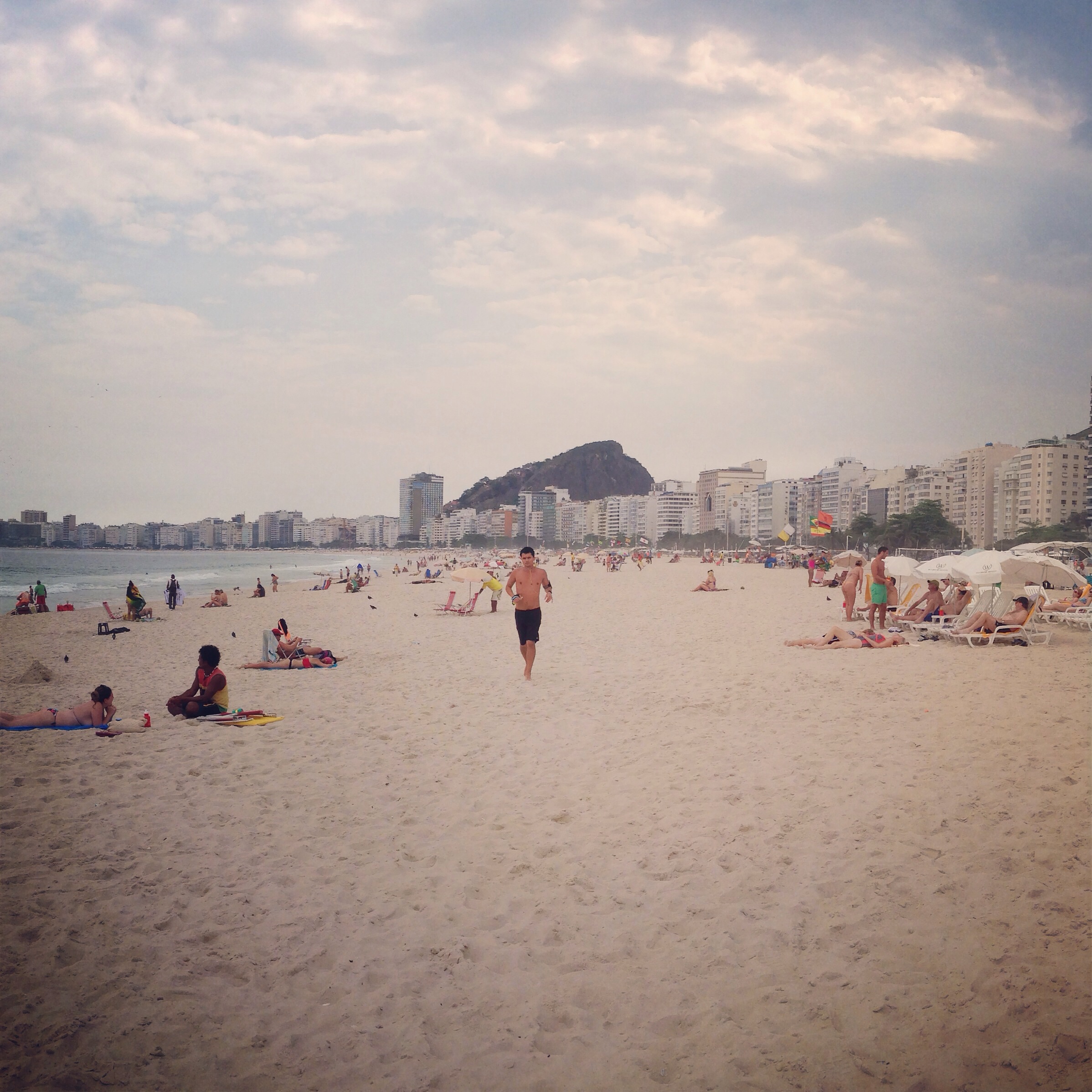 Copacabana beach
Today I visited the botanical garden which is classified as a UNESCO Biosphere Reserve. It was founded back in 1808 and it's a really nice place. But Rio having the size and population that it has makes its impact and I was unable to find a corner in the huge garden where I could escape the sound of traffic. 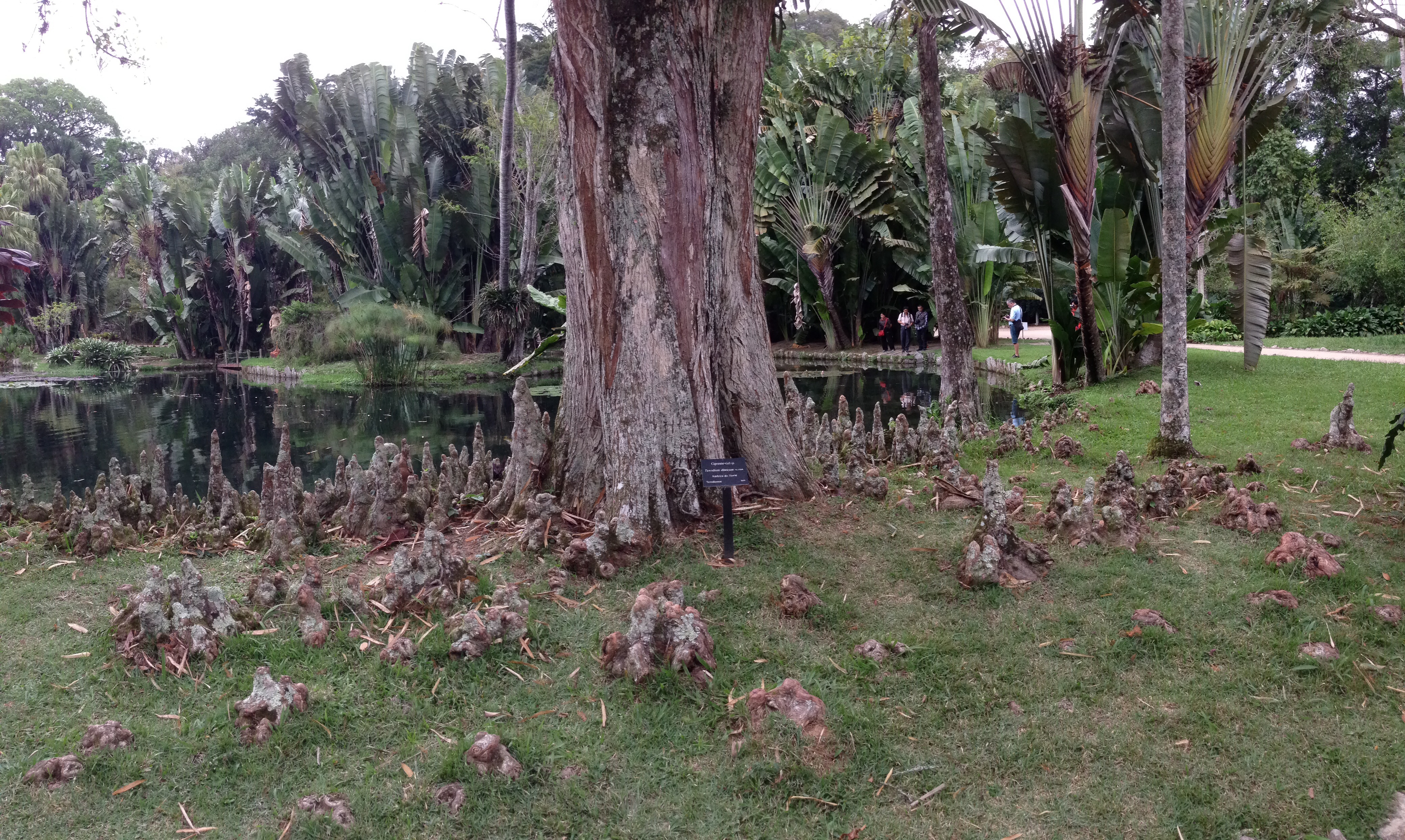 From the botanical garden. I love how the roots come up as stalagmites.
A few hours later as I was walking away I saw a fitness center where 5 really fit men were exercising really close to the window. Next to the fitness center an extremely heavy set man was sitting in a chair...probably the largest man I have seen for a long time. Modern day contrasts?
Actually I find people here to be very beautiful in general. Both men and women. I was looking for a really beautiful woman and a handsome man on the beach for a video clip I wanted to do. Eventually I found a couple and asked them the awkward question about if I could do a video with them? When the woman, Angie, asked what she had to do? I answered: "throw a glass of water in my face and then slap me". She immediately agreed. Then I wanted the man, Gaspar, to hold my hand and jump into the sunset - and he was up for that. What a strange world we live in. But how wonderful it is at the same time :)  I'm doing a video for each of the 12 South American countries...but you'll see in a month or so.

Angie and Gaspar. The woman who hit me and the man who held my hand :)
I'm tired. My mind and body needs a rest and I'm looking to take that rest here in Brazil. Preferably on a boat on the Amazon river with no internet. I love what I'm doing. I love meeting new people and engaging in conversations. I don't mind answering questions but nonetheless I feel exhausted now. It's almost been a year now and together we have reached 59 countries without stepping into an airplane. I guess it's no wonder that I need a rest and more than a few nights in the same bed :) 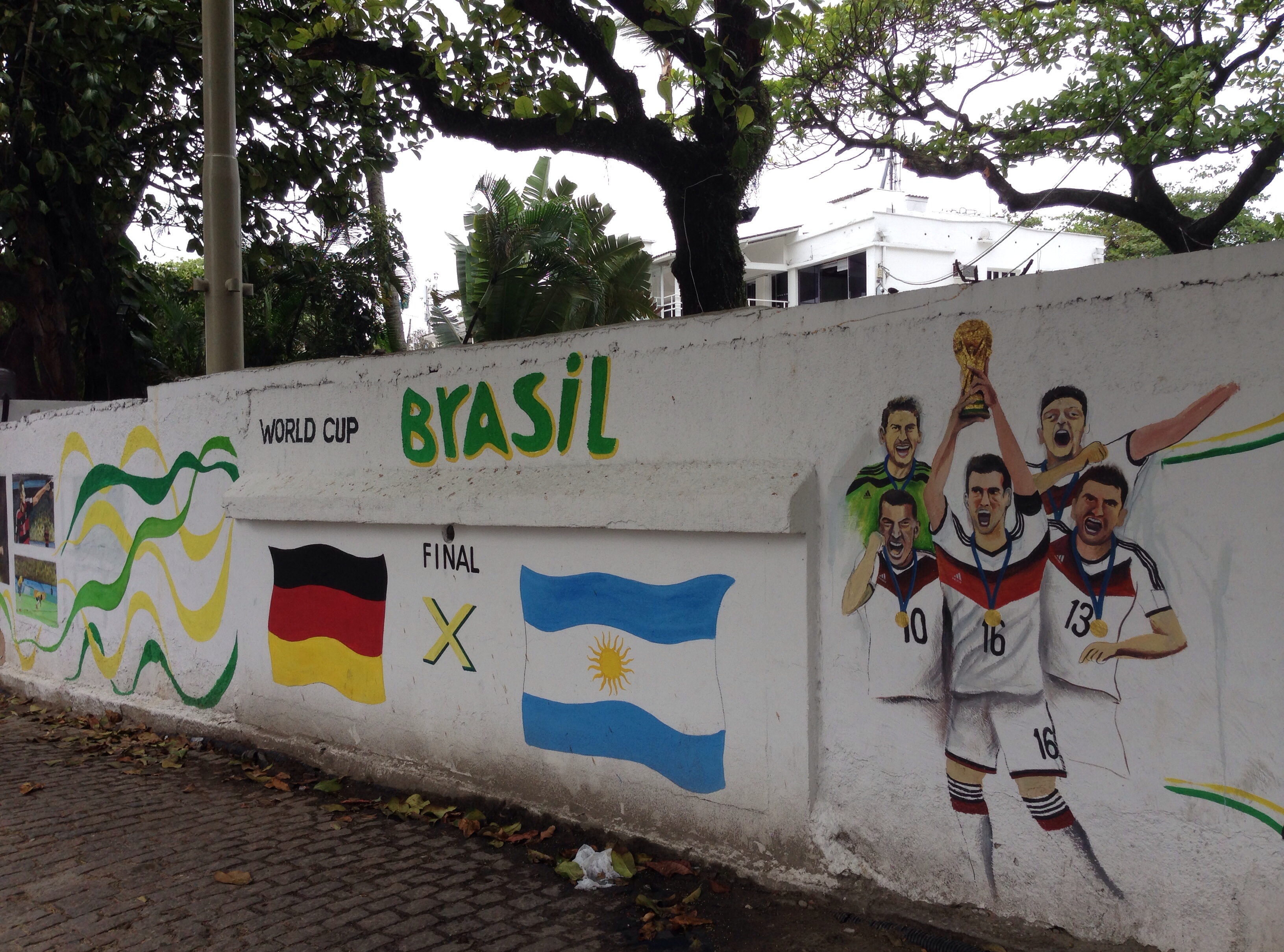 Worldcup 2014. Olympics 2016. Rio is rocking it hard.
So far Brazil has offered many new kind faces. I have visited the Red Cross which in Rio has a palace as its headquarters. It used to be a hospital and the entire square in front of it has been named: the Red Cross square. I spotted the INCA (cancer treatment hospital) across from the Red Cross. The INCA building is tall and I thought I might talk my way to the roof of it for a picture of it all. It took a lot of talking but I managed to meet Marcelo Cujueiro (press officer) and he helped me out. So here you go :) 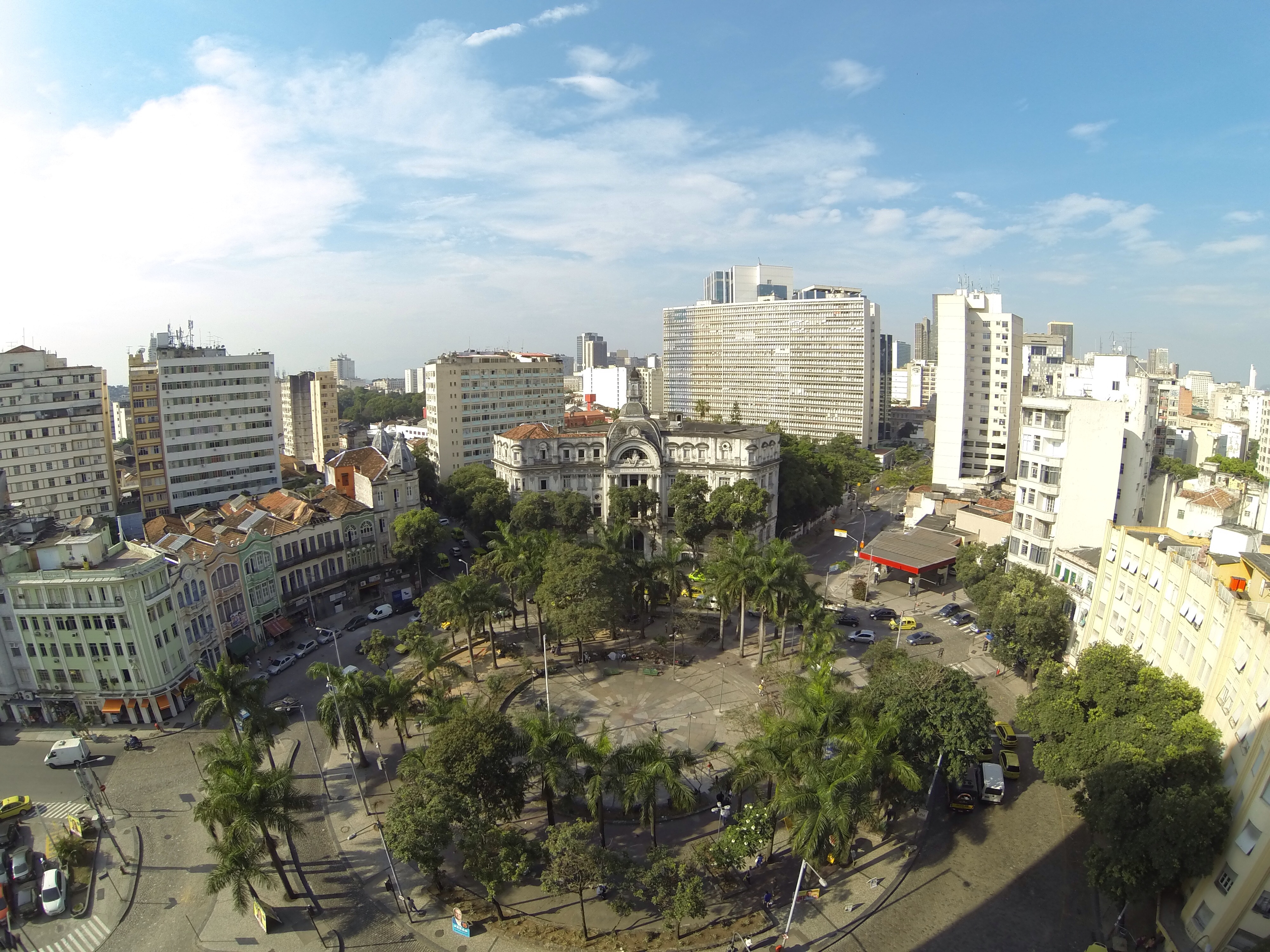 The 'Praça da Cruz Vermelha' or "Red Cross square" (though circular).
I have a lot more to tell you. But we will get around to all of that later. Tomorrow the Red Cross will take me with them into the favelas which is the famously known slum areas in Rio. It will be interesting to see how the Brazilian Red Cross works and it might just cost me a little more of my soul :)
On a final note: I had no idea that "Rio de Janeiro" meant "the January river" :)

Best regards
Torbjørn C. Pedersen (Thor) - giving pieces away of my soul until there is no more :)