What happens when I don’t care anymore? (Hong Kong)

And we just keep on keeping on

Blessed with countless interviews, phenomenal project partners, unprecedented achievement and an overwhelming online following. There is no doubt the Saga is a success. And we may be inching closer to leaving Hong Kong. But man!!! I am so tired.

Last week’s entry: Why we’re stuck in Hong Kong and other fun subjects

I cannot believe that any of you, who take your kind time to read these weekly entries would mistake Once Upon A Saga for a holiday. And anyone who knows me well must be aware that I have tried a lot in relation to moving the Saga forward. Yet the same questions keep coming. “When are you going to the next country?” is a common one and I don’t know the answer. But I do know that The Government in Palau has taken an interest in inviting the Saga, thanks to the tireless work of Roel. Roel is our Dutch friend in Palau who has had more than 500 days to familiarize himself with the country, its culture and it’s roughly 20,000 beating hearts. Roel reached Palau just before the pandemic broke out and has been there ever since. Getting an invitation from government would be a huge step forward. With that in hand I can share it with Pacific International Lines (PIL) in Singapore and hope that along with my employment in Hong Kong, my Hong Kong ID-card, and proof of vaccinations, PIL top management will agree to carry the Saga to country number 195. Optimally also return me to Hong Kong afterwards. It will take about 14 days to sail to Palau and the service to Palau is biweekly meaning that I would need to spend minimum 14 days in Palau before making the 14-day trip back. However, I will also need to quarantine for 14 days in Palau as I would be traveling there with people who have not been vaccinated. Why seafarers have not yet been recognized as key workers is beyond me?! They connect 80-90% of all commodities sold and bought on this planet. Without seafarers the shops would quickly empty out. And seafarers furthermore go from one country to the next. It makes sense to get them vaccinated asap. But a lot of things do not make sense these days. 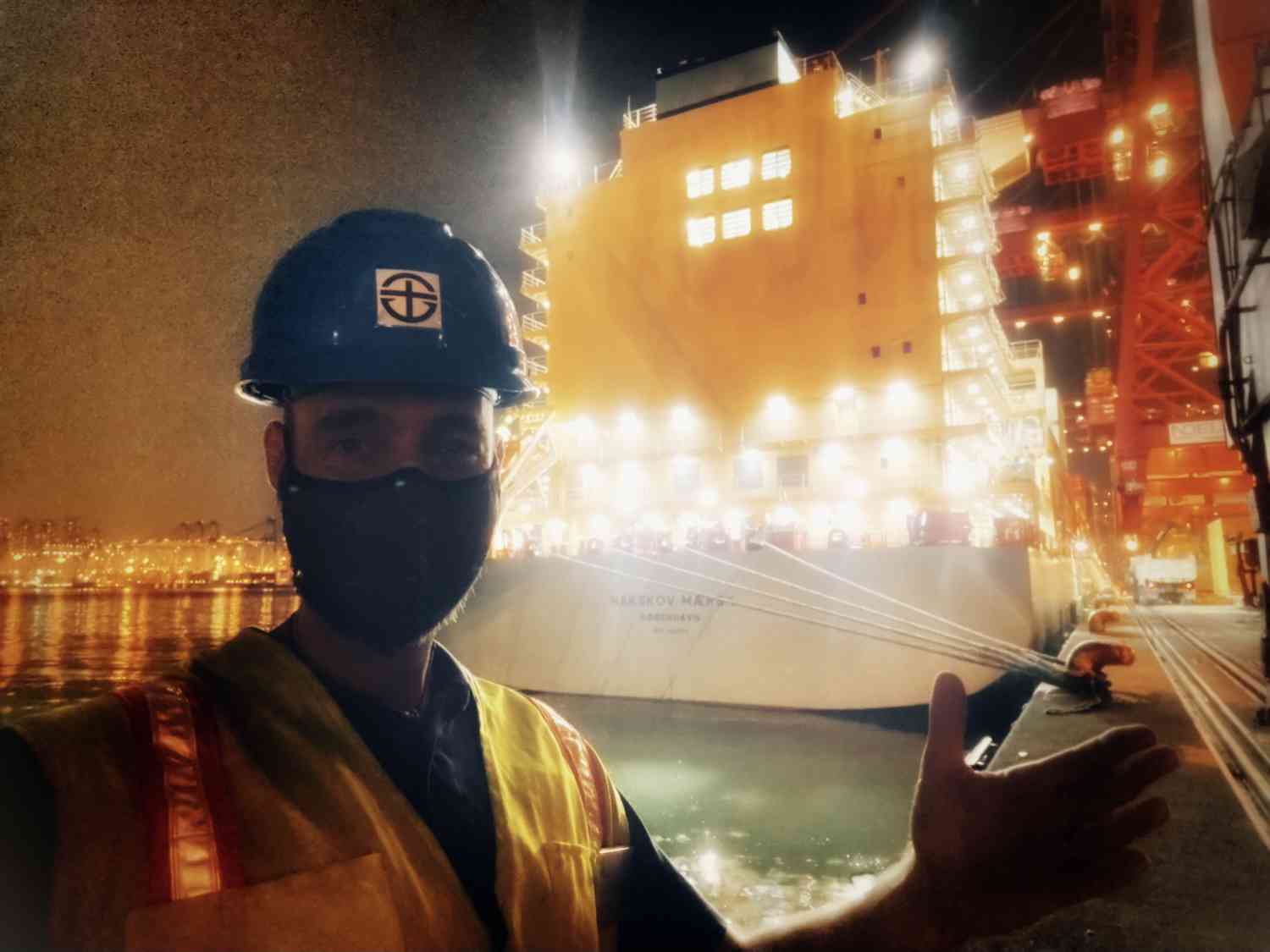 It has been a busy month at the Danish Seamen's Church. Lots of ships to attend to! That's what it's about. We're here for the seafarers.

Anyway: 14 days to reach Palau, 14 days of hotel quarantine, 14 days to return to Hong Kong and possibly 7-14 days of hotel quarantine in Hong Kong. That’s about two months without spending any real time in Palau. So after exiting quarantine in Palau I think the best thing would be to spend 14 days outside of quarantine in Palau before catching a ride with PIL back to Hong Kong. I will not be able to return to Hong Kong unless I have employment as there is still no access for tourists, and my workplace in Hong Kong has kindly extended my contract until December 31st. Immigration on the other hand will not process the extension until one month before the current one expires meaning that I cannot start the process with Hong Kong Immigration before August 18th. And the process might take weeks. I may be able to get Hong Kong Immigration to process my extension application ahead of time but it’s likely they will not meet this request. If we stick to the current plan which is to conclude a roundtrip from Hong Kong to Palau and back followed by a second visit from my wife before heading to New Zealand, then this situation with immigration pushes the timeline even further into the future. It is important for my wife and I to see each other in Hong Kong while we can. Because there is no guarantee that she will be able to enter any of the remaining nine countries. And getting Ultra-Wifey to Hong Kong is another lengthy process with a paper trail stretching to the moon and back. You would think it would be easier the second time around but the kind lady at immigration told me no. She said we would have to start all over again. 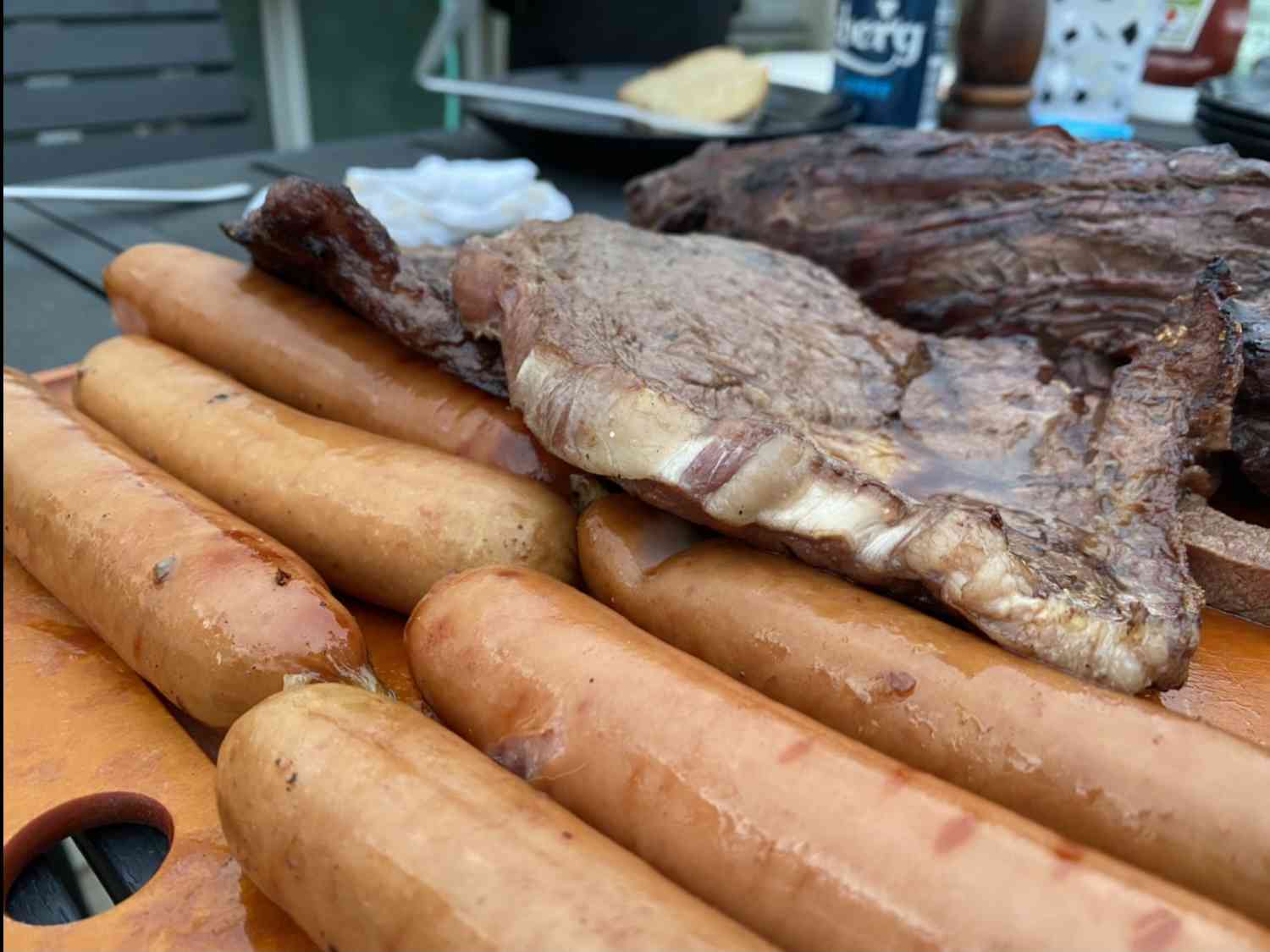 BBQ at Kenneth and Rose's place. I wanted a steak and my wish came true. Hanging out with friends on the rooftop. Just perfect.

Do I think we can get permission to enter New Zealand? Yes! I kind of do. New Zealand has a progressive and media savvy Prime Minister and they have a highly creative and openminded Red Cross National Society. It is a modern country with a relatively small population and an act for tourism promotion. I believe that transport can be sorted with Maersk who runs a service between New Zealand and Hong Kong. Maersk has helped us out on numerous occasions and I feel confident that they will do so again. In fact, I have spoken to a Maersk employee who believes that they can get me on the ship to New Zealand – but not into New Zealand. And that is quite vital if we are to avoid getting stuck at sea. 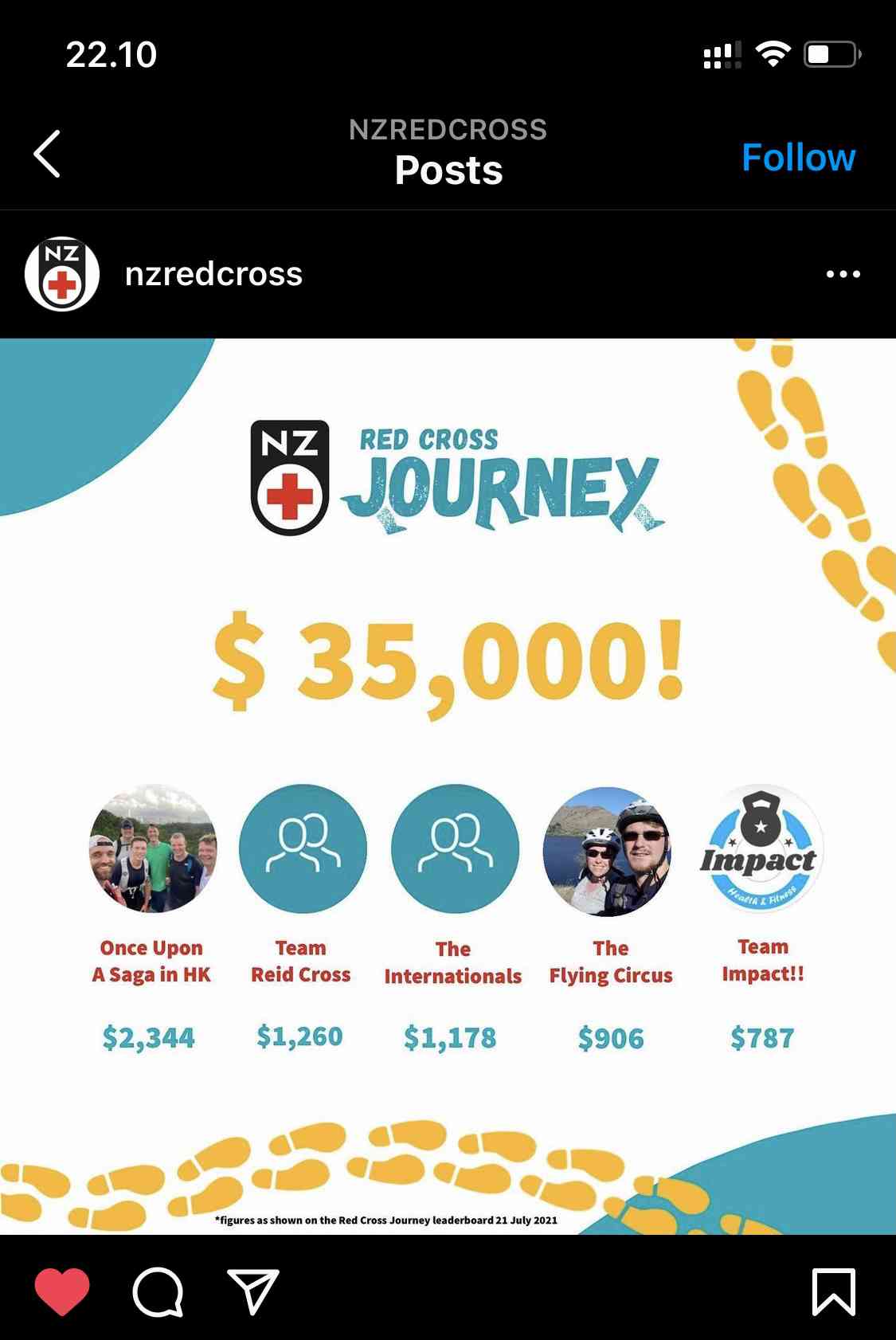 The status a few weeks ago. Good work everyone! Thank you for all the contributions.

It has been a strange week. My batteries have been depleted and I have spent as much time as I could sleeping or resting. Saturday last week, I headed back out on the Hong Kong Trail for the fourth time this month. I have become quite familiar with the trail but it remains an achievement to get through it. The trail is after all close to 47km (29.5mi) across 1,300m (4,200ft) of mountainous elevation. A couple of weeks ago I went through it rather fast which meant that recovery took longer than normally. With the #RedCrossJourney still at full swing I pushed myself even harder and I might be paying the price now. Amazingly the #RedCrossJourney has been a success and I owe many of you a huge thanks for that being the case! Four goals were set and they have all been reached:

1) Covering the distance between Myanmar and Thailand as a group – 1,175km (730mi). This symbolized the distance many refugees take as they are forced to leave their homes.

3) I have personally covered the distance between Afghanistan and Pakistan – 425km (264mi) which also symbolizes a distance many refugees need to cover on their road to safety. 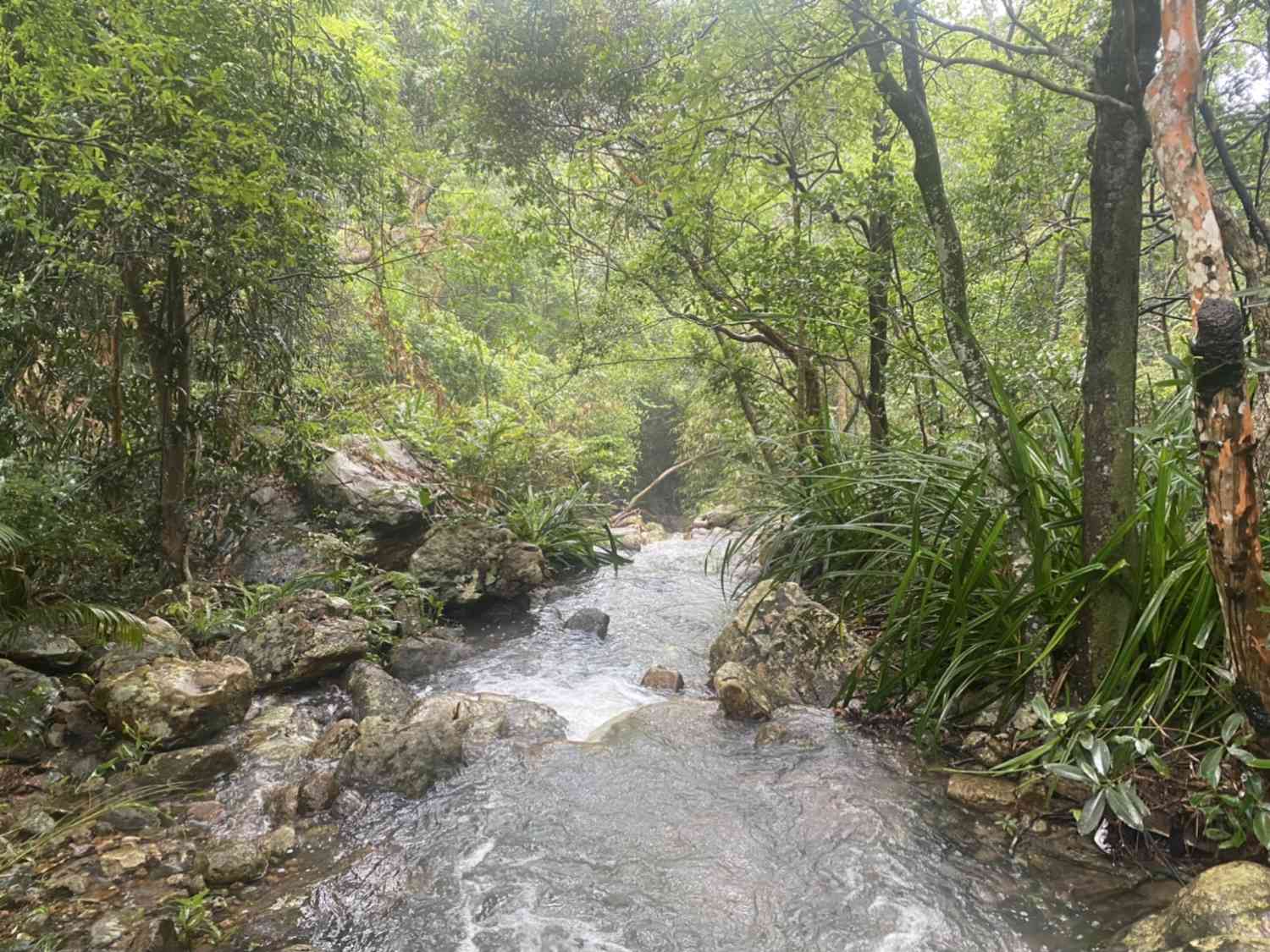 The beauty of Hong Kong still touches my heart.

Reaching New Zealand would be a breath of fresh air. The country is about 10% larger than the United Kingdom and it is breathtakingly beautiful. I went back in 2008 with my friend Cam and we toured both the South and North Island. There is nothing wrong with being in Hong Kong. Hong Kong is absolutely fantastic within its own right. It is just that the longer we stay in Hong Kong the longer it will be before I get to go back home. And I really don’t want to go home before this project has been completed. On a personal level I have been through too much to get this far. But Once Upon A Saga also holds great value to many people around the world. Yesterday someone questioned how I felt not being a part of the work force and suggested that I was sort of freeloading my way through life. There will always be people who misunderstand. I chose to reply like this:

First of all - thank you for being a part of the working force.

I think you have been misled by social media which is understandable. I often post the most interesting and inspiring aspects of life and not the everyday toll of it all.

Let me enlighten you a bit. I am 42 years old and I have worked most of my life. I also served 3 years in the military and was stationed abroad on a mission in East Africa. I followed up on that with a 12-year career within shipping and logistics.

Since October 2013 I have been the project manager of Once Upon A Saga. I’m in charge of the successful execution which involves solving highly complex logistics and bureaucracy. Once Upon A Saga has several project partners and I also tend to the agreements made with them. To further promote the project, it’s partners and the overall values I conduct interviews and have done so across more than 160 countries.

As a public speaker I have presented Once Upon A Saga on more than 100 occasions across more than 50 countries.

As a goodwill Ambassador of the Danish Red Cross I have visited and promoted the movement in 189 countries and continue to generate weekly updates.

Social media now counts more than 100,000 followers which makes it time consuming. Content is created on a daily basis and there are thousands of interactions to tend to including yours.

While in Hong Kong, I’m also temporarily working for the Danish Seamen’s Church, and service Danish flagged ships which arrive to Hong Kong. There have been 10 just this month. We also organize events for the Danes in Hong Kong.

To visit a few countries may be a holiday or a gap-year experience. However, less than 300 people have managed to reach every country in the world and they all had to draw on flight at some point. Reaching every country completely without flying offers another level of complexity and it certainly classifies as work.

I hope this clarifies things for you.

Someone will read this and question my insecurity. Why would I bother to defend myself toward a complete stranger? It is a good question. Perhaps I am insecure in such matters. And back to the title of this entry: What happens when I don’t care anymore? Well, fortunately I still care. I care because I believe that it is important to set an example and inspire people around us. I believe that this world of ours deserves a more positive promotion than what is often seen in the media. I believe that most people anywhere on this planet are kind and well meaning and that someone should advocate for that. I believe in hard work and in accomplishing goals. I believe in our united efforts to reach the final countries. And finally: I believe in myself and my ability to make the impossible possible. 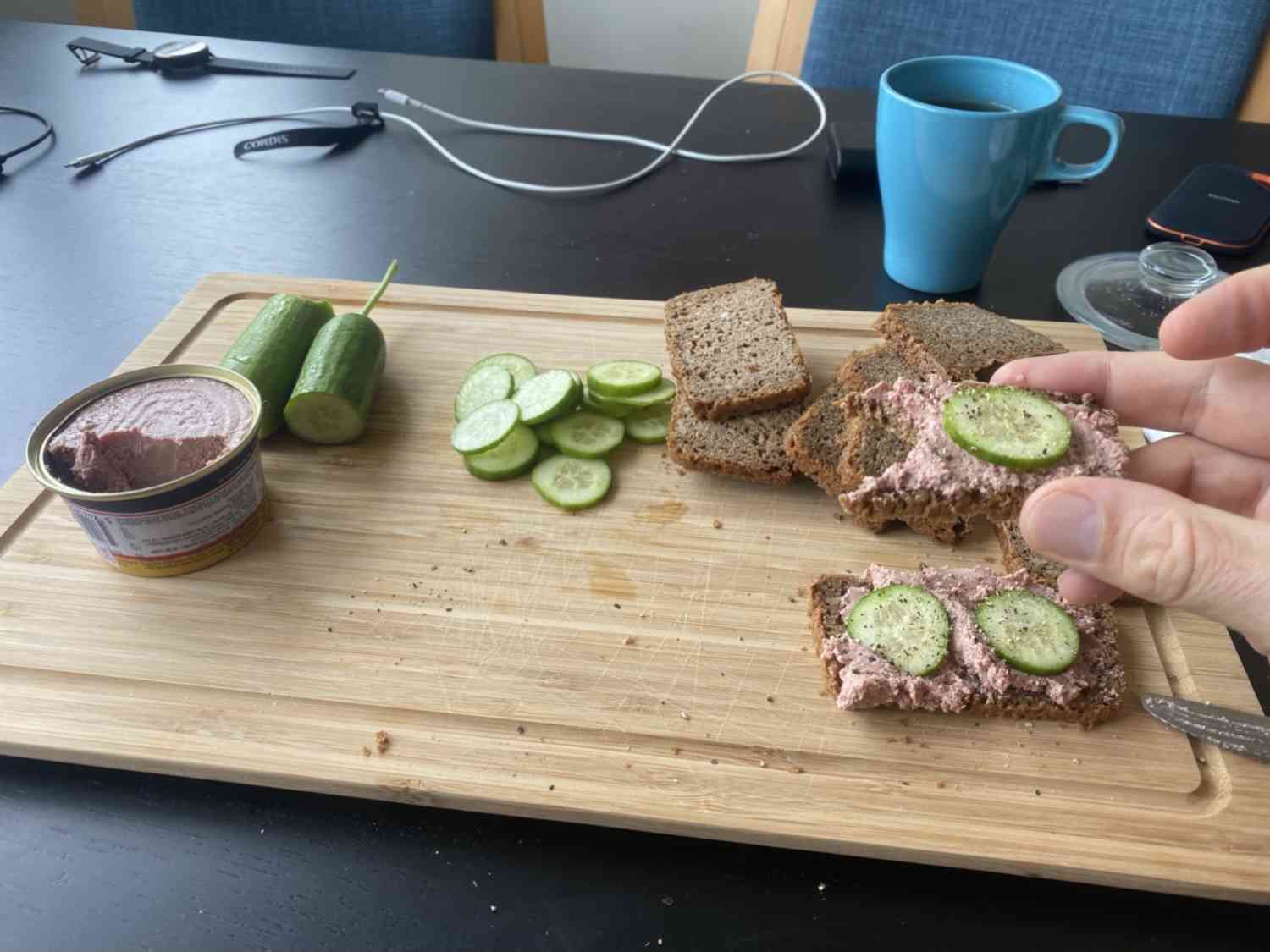 Enjoying some of the last bread Ultra-Wifey baked. I still have a bit in the freezer.

And that brings us to the end of this entry. Tomorrow, Saturday, my friend Jakob and I will go through the Hong Kong Trail together. It will be my fifth and final time this month. Jakob aspires to make a personal best and clock a time around 7 hours. I aspire to complete the Hong Kong Trail in less than 6 hours some day but not tomorrow. The temperatures need to drop before I will give it a go. 7 hours seems fine by me here towards the end of July. Typhoons are coming in left and right of Hong Kong but so far, we are only dealing with high temperatures, a high humidity and some thunderstorms. My goodness. When we reached Hong Kong 549 days ago, I could barely run 5km (3mi). I hope that’s worth another donation to the #RedCrossJourney which ends this month :)

Stay sane and safe wherever you are.